[0020] These drawings illustrate certain aspects of some of the embodiments of the invention, and should not be used to limit or define the invention.

FIG. 1 is a diagram of one embodiment to process biomass material according to certain aspects of the present invention.

FIG. 2 is a diagram of another embodiment to process biomass material according to certain aspects of the present invention.

[0041] In a preferred embodiment, after the solid biomass has reached the desired pH with the addition of acid, a microbe is added. A microbe in the additive context refers at least to a living organism added to the solid biomass that is capable of impacting or affecting the prepared biomass material. One exemplary impact or effect from added microbe(s) includes providing fermentation or other metabolism to convert fermentable sugars from various sources, including cellulosic material, into ethanol or other volatile organic compounds. Another exemplary impact or effect may be production of certain enzyme(s) that help to deconstruct cellulose in the prepared biomass material into fermentable sugars which can be metabolized to ethanol or other VOC. Yet another exemplary impact or effect provided by a microbe includes production of compounds such as vitamins, cofactors, and proteins that can improve the quality, and thus value, of an eventual by-product that can serve as feed for animals. Further, microbial activity provides heat for the pile. Parts of the microbial cell walls or other catabolite or anabolite may also offer value-added chemicals that may be recovered by a recovery unit. These impacts and effects may also be provided by microbes indigenous to the solid biomass.
[0042] Any microbe that is capable of impacting or affecting the prepared biomass material can be added. In a preferred embodiment, the microbe(s) can include microbes used in the silage, animal feed, wine, and industrial ethanol fermentation applications. In one embodiment, the microbe selected includes yeast, fungi, and bacteria according to application and the desired profile of the organic molecule to be made. In a preferred embodiment, yeast is the selected microbe. In another embodiment, bacteria can be added to make lactic acid or acetic acid. Certain fungi can also be added to make these acids. For example, Acetobacterium acetii can be added to generate acetic acid; Lactobacillus, Streptococcus thermophilus can be added to generate lactic acid; Actinobacillus succinogenes, Mannheimia succiniciproducens, and/or Anaerobiospirillum succiniciproducens can be added to generate succinic acid; Clostridium acetobutylicum can be added to generate acetone and butanol; and/or Aerobacter aerogenes can be added to generate butanediol.
[0043] The following Table 3 provides non-limiting examples of preferred microbes, which can be used individually or in combination.
Table 3

[0098] In this example, various samples of fresh chopped sorghum are mixed with a variety of added components as listed in Table A.1 and are stored in silage tubes for 258 days. The amount of ethanol produced in each experiment is shown in the bottom row of the table. The addition rates of selected additives are shown in Table A.2.
Table A.1
Table A.2

[0099] The experiments of Example A demonstrated the principle of ethanol production in silage piles and the duration of that storage. Further, they demonstrated effects of certain additive. All cases in the example produced a significant amount of ethanol indicating that embodiments of the invention can be quite robust. In Table A. 1, all but the last row describe what additives went into the test. The bottom row describes the result in terms of ethanol production in that experiment. In general, the experiments with acid showed superior stability to those without acid. Nevertheless, experiments without acid still yielded ethanol production, indicating that an acid additive is optional.

[0103] Some of the conditions tested provided sufficient pre-treatment of the biomass coming out of the volatiles recovery unit to allow for conversion of some of the remaining cellulose to biomass. Conditions from Samples 6 and 7 in Example C above produced statistically significant quantities of ethanol when a small amount of enzymes and yeast were added to the sample of the remaining solid components and were stored in an anaerobic environment. Other conditions tested were from Sample 3, 4, 8, 10, and 12. These samples produced no ethanol when placed in the same test conditions as samples 6 and 7. The conclusion from this is that under the test conditions described in sample numbers 6 and 7, certain embodiments of the present invention can be used for the subsequent production of cellulosic ethanol by ensiling the solid component from the volatile organics recovery unit.

[0104] In these experiments, a 700 ton pile was prepared according to aspects of the invention and stored in a bunker. On day 504 of storage in the bunker, three samples were taken from the top, center, and bottom of pile, all showed similar levels of compounds. The samples were stored at 4 degrees C.

[0105] The samples were squeezed through a 60 mL syringe without filtration, and the liquid was collected.

[0106]
[0107] The following compounds were indentified in the headspace under both conditions, indicating that these compounds were produced and can be potentially recovered using the solventless recovery system and captured during a subsequent distillation process in certain embodiments.

1. A method for the recovery of a volatile organic compound from a biomass material comprising:

separating a gas component from a solid component of the heated biomass material, said gas component comprising at least one volatile organic compound; and

retaining at least a portion of the gas component for use as at least part of the superheated vapor stream,

wherein the at least one volatile organic compound is ethanol.

2. The method of claim 1 further comprising maintaining the superheated vapor stream at a target temperature.

3. The method of claim 2 wherein at least a portion of the superheated vapor stream has a temperature in the range of 104 degrees C to 372 degrees C.

4. The method of claim 2 wherein the maintaining step comprises using a heat exchange component coupled to the compartment.

5. The method of claim 4 wherein a thermal energy source of the heat exchange component does not directly contact the introduced biomass material.

6. The method of claim 1 further comprising introducing a fraction of the gas component to a distillation column.

7. The method of claim 6, said method further comprising the step of purifying at least a portion of the product from the distillation column to produce an enriched ethanol product stream having an ethanol content of greater than 99 % wt.

8. The method of claim 7 wherein said enriched ethanol product stream is used as a component in an automotive gasoline composition.

9. The method of claim 1 wherein the initial liquid content is up to 80 wt% based on the biomass material.

11. The method of claim 11 further comprising the step of obtaining a volatile organic compound recovery target by controlling the flow rate of the stream of vapor component exiting the system.

12. The method of claim 1 wherein at least a portion of the solid component exiting the solventless recovery system has a temperature of less than 50 degrees C.

15. The method of claim 1 wherein the solid component comprises liquid in a range of 30 wt% to 70 wt%, depending on the ethanol removal target. 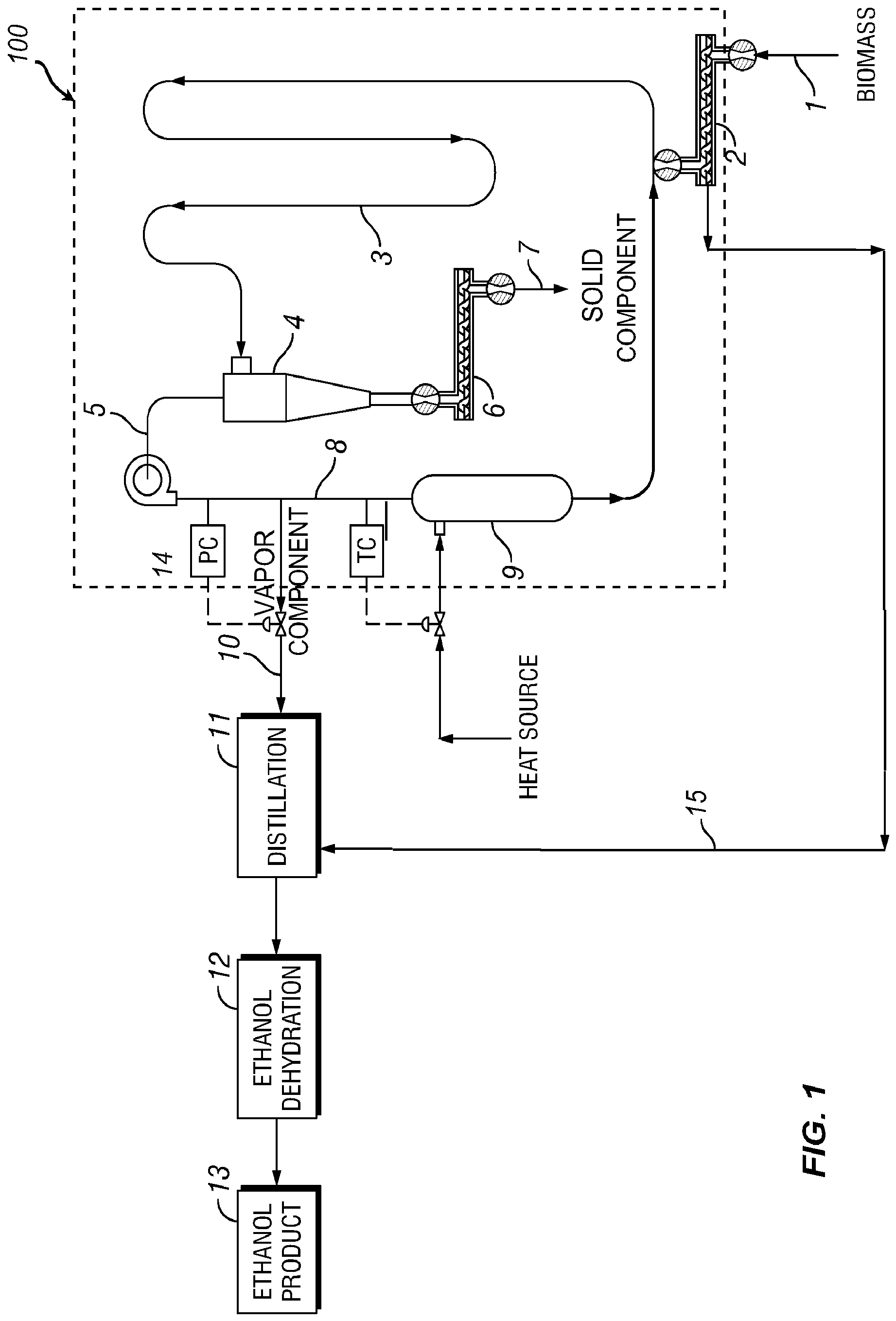