[0002] Semiconductor packages or encapsulations are typically formed of one or more of metal, plastic, glass, or ceramic materials which are arranged to house one or more semiconductor dies. Such packages may provide protection against impact and corrosion and dissipate heat produced in the die.
[0003] In the field of Radio Frequency (RF) electronic devices, such as for example RF power amplifier devices, RF isolation is necessary to reduce the cross-talk of signals from between channels and also RF return currents which may be induced in metal device features. RF isolation also maintains the integrity of amplified signal, and reduces system measurement uncertainties.
[0004] RF technologies device packages such as ceramic brazed package constructions or Liquid Crystal Polymer package constructions are known to provide good RF isolation and EM conduction. However these package constructions are expensive to produce.
[0005] In general it is known that plastic compound cavity moulded packages provide more cost effective alternatives to ceramics and LCP packages. However, there are a number of challenges in applying plastic mould compound encapsulations to semiconductor devices, most notably minimising and controlling so-called mould flashing (also known as mould creep or bleeding) to keep metallic floating leads, where additional electrical connections such as wire bond will be made free from mould compound. In addition RF semiconductor devices and high voltage MOSFET devices, for example, are known to be high heat dissipating devices which may therefore limit the type of plastic mould compound encapsulations and moulding techniques available. This is due to the potential for damage caused to the encapsulation caused by melting.
[0006] The following documents belong to the prior art:

[0007] A known technique for moulding or encapsulating devices is known as Film (or Foil) Assisted Moulding (FAM). FAM is a so-called transfer moulding technique which uses plastic films in the mould in an attempt prevent liquefied mould compound from reaching certain areas of the device, such as portions of the leads to be wire bonded, during the moulding process. Other known methods for moulding include thermo- compression techniques but they do not involve the use of a film to protect against liquefied mould compound from reaching certain areas of the device.
[0008] Once the film is in place the transfer molding process takes place. Generally speaking the moulding process involves liquefied moulding material being forced into closed mould cavities and held under heat and pressure by the top and bottom heat sink clamps, until the mould material is solidified and cured. The mould is then opened and the encapsulated devices are unloaded, for further device processing, such as mould flash removal and wire bonding.
[0009] Film-Assisted Molding offers a number of advantages over other transfer molding techniques and known thermo-compression techniques. These advantages include the easy release of the encapsulated products from the mold, and protection or isolation of surfaces (such as the semiconductor device die and/or leads for later wire bonding) from moulding compound.
[0010] However, for this process to be effective the film must be compressed such that it seals to prevent mould flashing of the compound escaping from the mould cavity, especially onto floating leads. Sealing is typically achieved by pressing the film onto the surfaces to be protected by the heat sink clamps from the top and bottom of the device. Also during the moulding process with the dies already in place it is necessary to keep the device dies isolated from the moulding process and the moulding compound such that the die does not get encapsulated thereby allowing the die to be wire bonded to the leads post-molding.
[0011] Due to the nature of the floating leads it can difficult to apply sufficient sealing pressure using heat sink clamps during the moulding process because the leads are floating and not supported by the base 12. The leads are not supported by the base because it is necessary that the leads are electrically isolated from the base. During FAM it is desirable to apply pressure to the film to prevent compound from bleeding. However, if the pressure applied is too great this will deform the lead downwards, resulting in a downward angled (towards the base 12) lead frame surface. The downward deformation makes it difficult to wirebond the leadframe to the device die after the moulding process is complete.
[0012] Mould flashing (or polymer bleeds) on semiconductor device leads are a major problem for device manufacturers because they significantly degrade the solderability of the leads and specifically for surface mount devices bleeds can cause misalignments between the printed circuit board (PCB) and can result in the device being tilted on the PCB. Furthermore, the flashes may fall-off during the process of mounting devices on to PCBs due to vibrations occurring during the device mounting process. The loose flash material can fall onto the solderable area of the PCB also causing the device to be partially or not to be soldered which can also result to package tilting on the PCB.
[0013] A known solution to the problem of mould flashing (or polymer bleeds) is simply to remove the unwanted polymer material from the leads after the moulding process has been completed. Removal method for polymer bleeds from the leads can be chemical such as a chemical etch, or by mechanically etching. However, such removal methods introduce a further processing step which can in turn add to the time and cost of producing devices.

[0014] The present invention seeks to provide a packaging method which mitigates or overcomes at least one of the above mentioned problems.
[0015] According to a first aspect there is provided a method of manufacturing a package for an RF device as claimed in Claim 1. Herein use is made of film assisted moulding.
[0016] According to a second aspect, a device obtained by the method is provided.
[0017] In the method, use is made of a leadframe comprising: a base portion; and a connection lead, wherein the base portion comprises an upper surface arranged for mounting one or more semiconductor device dies, wherein the connection lead comprises a portion arranged horizontally with respect to the upper surface of the base portion for external connection and an angled tip portion for connection of a wirebond to the semiconductor die., In the method, the angled tip portion is arranged to seal against a film for the film assisted moulding during moulding of the semiconductor device.
[0018] During film assisted moulding of semiconductor devices arrangements as described allow the lead frame to seal against a film and there by prevent mould bleeding or flashing onto the leads.
[0019] The angled portion may comprise a recessed portion around its periphery or edge, where the recessed portion may act as a reservoir to collect any mould compound that may bleed during the moulding process so as to prevent any mould compound from bleeding on to the lead. The recessed portion may also act to locally deform the film such that during manufacture of the semiconductor device the film sits in the recessed portion to create an improved seal against mould bleeding or flashing.

[0020] The invention is described further hereinafter by way of example only with reference to the accompanying drawings in which:

Figure 1 is an illustration of a floating lead and base;

Figure 2 is a cross-sectional illustration of the floating lead and base encapsulated in mould compound;

Figure 3 is a schematic cross-sectional illustration of a film applied in a FAM arrangement;

Figure 4 is a cross-sectional illustration of a FAM arrangement according to an embodiment;

Figure 5 is a cross-sectional illustration of a floating lead and base according to an embodiment;

Figure 6b is a cross-sectional illustration showing a floating lead according to an embodiment; and

Figure 6c is a cross-sectional illustration showing a floating lead according to an embodiment.

1. A method of device packaging of an RF device comprising the steps of:

- Providing a leadframe comprising a base (12) with an upper surface and a connection lead (10);

- Mounting at least one semiconductor device die (14) on the upper surface of the base(12), either before or after the moulding process;

- Injecting moulding compound into the second cavities (37), thus electrically isolating the leads (10) from the base (12), and curing the moulding compound, to obtain a device manufactured by film assisted moulding;

- Releasing the device from the moulding machine;

2. The method as claimed in Claim 1, wherein the angled tip portion (11) is arranged to be resiliently biased against the first film (34).

3. The method as claimed in Claim 2, wherein the angled tip portion (11) subtends a positive angle (θ) with respect to the upper surface of the base (12) of between 3 and 5 degrees.

4. The method as claimed in any of the preceding claims, wherein the angled tip portion (11) overlaps the base (12).

5. The method as claimed in any of the preceding claims, wherein the angled tip portion (11) is configured such that following moulding it is within ± 1 degrees off the zero degree horizontal with respect to the base (12).

6. The method as claimed in Claim 5, wherein the lead (10) has a thickness that is chosen such that the angled tip portion is deformed by the pressure during the moulding process.

8. The method as claimed in Claim 1, wherein the at least one semiconductor die is mounted on the upper surface of the base (12) before placement of the first and the second film (34, 36).

9. The method as claimed in any of the preceding claims, wherein the RF device is an amplifier device.

10. The method as claimed in any of the preceding claims, wherein an edge (61) of said angled tip portion (11) comprises a recessed portion (60).

11. A packaged RF device having a cavity moulded package obtained with the method as claimed in any of the claims 1-10. 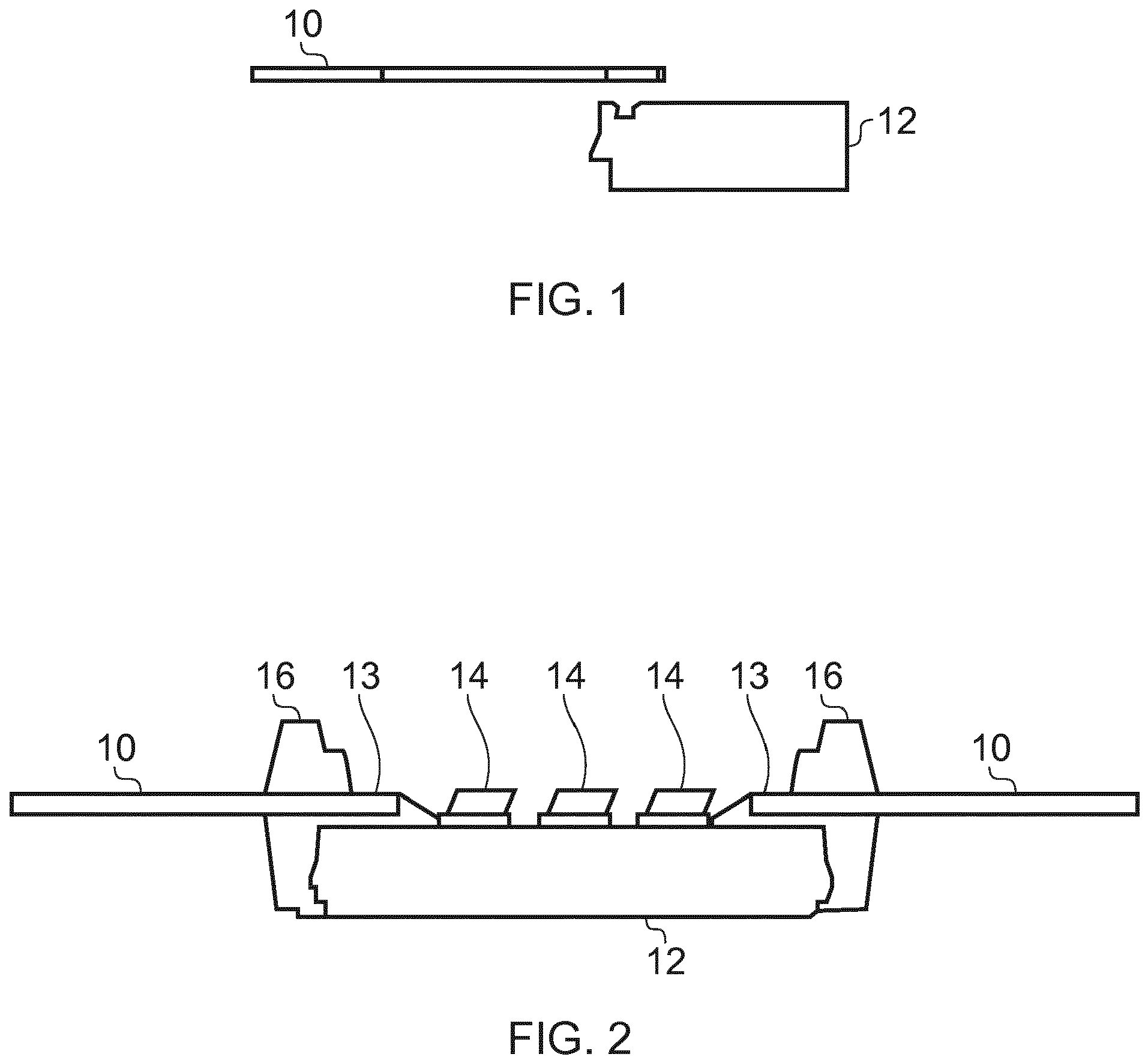 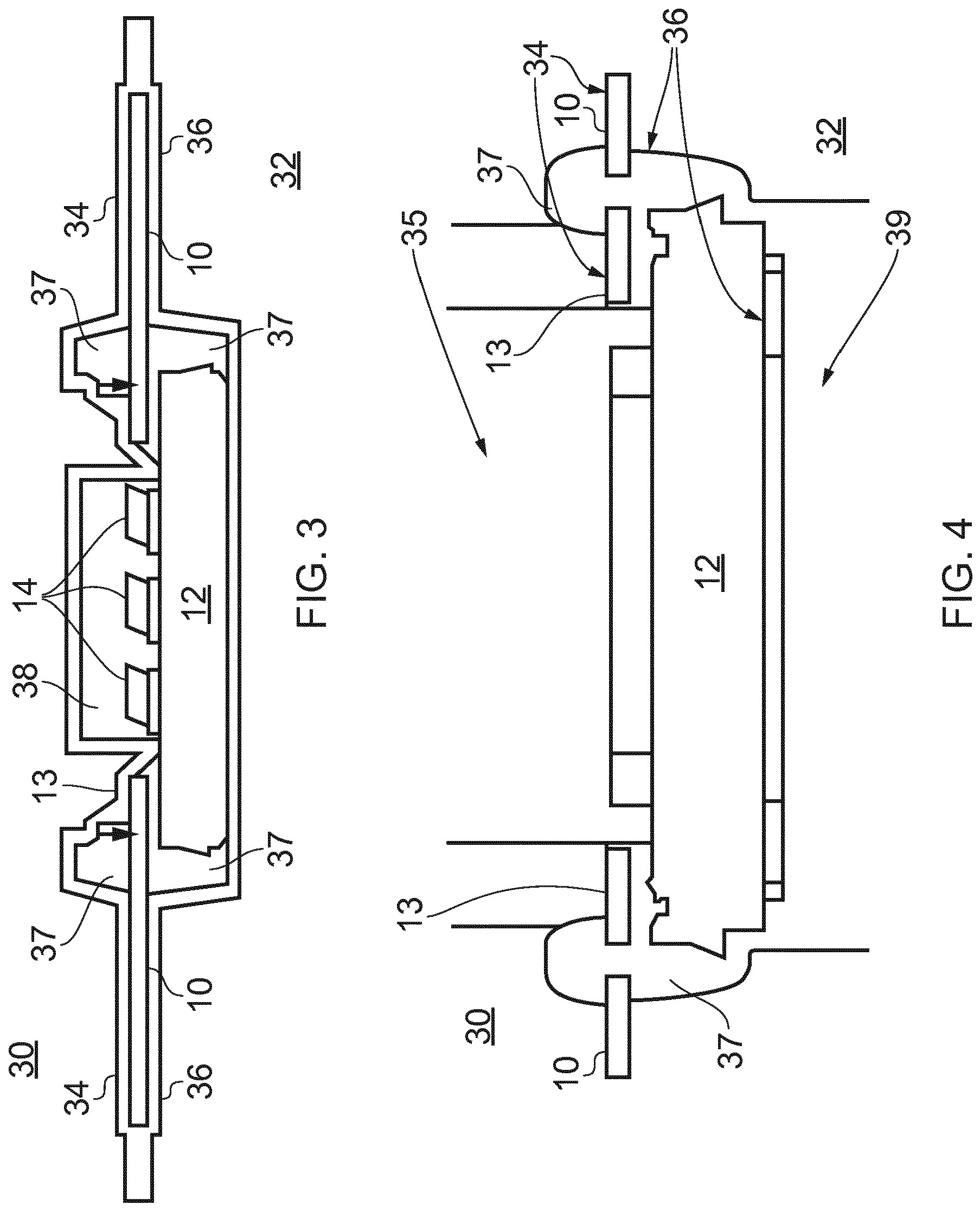