[0001] The subject matter described herein relates to a solution for the application of a contrast pattern on the surface of an object to be viewed and rendered by three-dimensional imaging system or platform.

[0002] A number of conventional platforms exist for the collection of two-dimensional image data of the surface of an subject (or object) and using that two-dimensional data to render (or otherwise represent) the object as a three dimensional computer model. The majority of these systems use electromagnetic radiation in the form of visible wavelengths to illuminate the surface of the object so that the reflections can then be received by an appropriate sensor or camera and placed into electrical format. These platforms have sophisticated hardware and software that process the received information in a fashion where the collected two-dimensional information can be used to render the three dimensional model.
[0003] A feature which has proved useful in accurately recognizing the surface of the object to be imaged is the application of reference markers to the object's surface. These reference markers are typically both reflective and opaque, and provide a high degree of contrast with the surroundings, enabling them to serve as reliable position indicators for the imaging optics.
[0004] An application for these platforms is the imaging of human teeth, such as for dentistry and orthodontics. A hand-held scanner is brought into proximity with the teeth, illuminates them, captures the reflected light, and sends that information to the processing segment, which can then use it to generate a three-dimensional model of part of a tooth, an entire tooth, or multiple teeth, etc. Crowns, orthodontics, molds, and the like can then be generated from the model. However, the human tooth is translucent and can vary in color, and its surface features are not always readily distinguishable by the imaging optics. It is therefore difficult to assess the surface features and an accurate location of the tooth exterior without the aid of the aforementioned reference markers.
[0005] The attempts to apply reference markers to the teeth described in prior publications are either insufficient or come with significant limitations. For instance, the composition disclosed in Intl. Publication No. WO 2009/150596 (Ernst) is in reality a bi-layer approach that requires application of a reference marker composition in two steps. A glue-type layer is applied first, and this is followed by the application of the reference markers in powdered form. The application of a composition bearing reference markers can be hindered if it does not dry fast enough. The patient can accidentally remove the composition with his or her tongue or saliva while it is applied or before the teeth have been fully imaged. Also, if the composition remains in liquid form long enough, the powder can run off or settle in an uneven manner across the tooth's surface (e.g., into crevices) resulting in reference markers being disproportionately allocated and hindering the creation of a dense, evenly distributed pattern. To combat this, Ernst uses a third, drying step in between application of the glue and the powder. A multiple step application process is time consuming and relatively more complex.
[0006] Intl. Publication No. WO 2011/162965 (Johnson) addresses the problem of slow drying compositions by applying a contrast composition that varies in viscosity based on changes in temperature. The composition is described as having low viscosity at ambient temperature and higher viscosity at body temperature, such that when the composition heats after application to the teeth it acts more like a gel and less like a liquid. However, a highly viscous composition tends to be thick when applied to the teeth. This can be problematic for the imaging system which must compensate for thickness of the composition to determine where the actual tooth surface lies. Also, because the composition does not fully dry, there remains a risk that it will rub or run off.
[0007] Intl. Publication No. WO 2011/056574 (Hall-Holt) recognizes the desirability of applying reference markers to teeth but does not describe the enabling specifics of a composition that can be used to apply those markers in practice. Hall-Holt suggests compositions that have a high viscosity, but does not disclose compositions that dry rapidly.
[0008] Intl. Publication No. WO 03/077839 (Butcher) discloses a composition that is predominantly alcohol and also uses a denture adhesive as a binding agent. Because of the high alcohol content (40%-94% by weight), this composition can potentially cause discomfort to a patient because of the thermal transfer that occurs during the evaporation of such a high alcohol content. This can be particularly troublesome with patients that have "cold-sensitive" teeth. Also, such a large alcohol content will typically take upwards of several minutes to dry.
[0009] New compositions and methods of their use are therefore needed to address these and other deficiencies in the current state of the art.

[0010] Provided herein are solutions for the application of a contrast pattern to the surface of an object to be imaged and modeled three-dimensionally. These solutions can contain a multitude of reference markers that have a high contrast as compared to their surroundings and will be referred to as contrast pattern compositions herein. The reference markers are in the form of particles (or particulates) that can be disbursed in a dense and evenly distributed pattern across the surface of the object to be imaged. The solution according to the present invention comprises a plurality of particles suspended in the solution, some of the particles consists of titanium dioxide spherical particles; a propellant; an intermediary solvent soluble in the propellant; and a polymeric bonder adapted to bond the plurality of particles to the surface of the object, the polymeric bonder being soluble in the intermediary solvent, wherein the plurality of particles consists of said titanium dioxide spherical particles and of vitreous carbon spherical particles. The compositions are suitable for numerous applications, including use on the teeth, where the compositions provide unique optical patterns against what can be a shiny and featureless surface. The composition can be applied from solution and can fully cover the underlying surface, substantially reducing or eliminating any undesirable surface reflections. The composition includes a bonding agent that bonds (or adheres) the particles to the surface relatively quickly enabling the composition to be "quick-drying" in certain embodiments.

[0011] The details of the subject matter set forth herein, both as to its structure and operation, may be apparent by study of the accompanying figures, in which like reference numerals refer to like parts. The components in the figures are not necessarily to scale, emphasis instead being placed upon illustrating the principles of the subject matter. Moreover, all illustrations are intended to convey concepts, where relative sizes, shapes and other detailed attributes may be illustrated schematically rather than literally or precisely.

[0033] In this example, the composition is applied as a spray and uses HFC 227ea as the propellant. Table 1 shows the components in the percent by which they make up the composition.
TABLE 1

1. A solution for the application of a contrast pattern to a surface of an object to be imaged in three dimensions, comprising:

- a plurality of particles suspended in the solution, some of the particles consists of titanium dioxide spherical particles;

- an intermediary solvent soluble in the propellant;

2. The solution of claim 1, wherein the propellant is a hydrofluorocarbon (HFC).

4. The solution of one of the claims 1 to 3, wherein the polymeric bonder is a food grade polymer.

5. The solution of one of the claims 1 to 4, wherein the polymeric bonder is selected from the group consisting of polyvinylpyrrolidone and polyvinyl alcohol.

6. The solution of one of the claims 1 to 5, wherein the intermediary solvent is a food grade alcohol.

7. The solution of one of the claims 1 to 5, wherein the intermediary solvent is denatured alcohol SDA 40B.

8. The solution of one of the claims 1 to 7, further comprising artificial flavor.

9. The solution of one of the claims 1 to 8, wherein the ratio of the plurality of particles to the polymeric bonding agent is between twelve-to-one and six-to-one.

10. The solution of one of the claims 1 to 9, wherein the ratio of the plurality of particles to the polymeric bonding agent is between nine-to-one and eight-to-one. 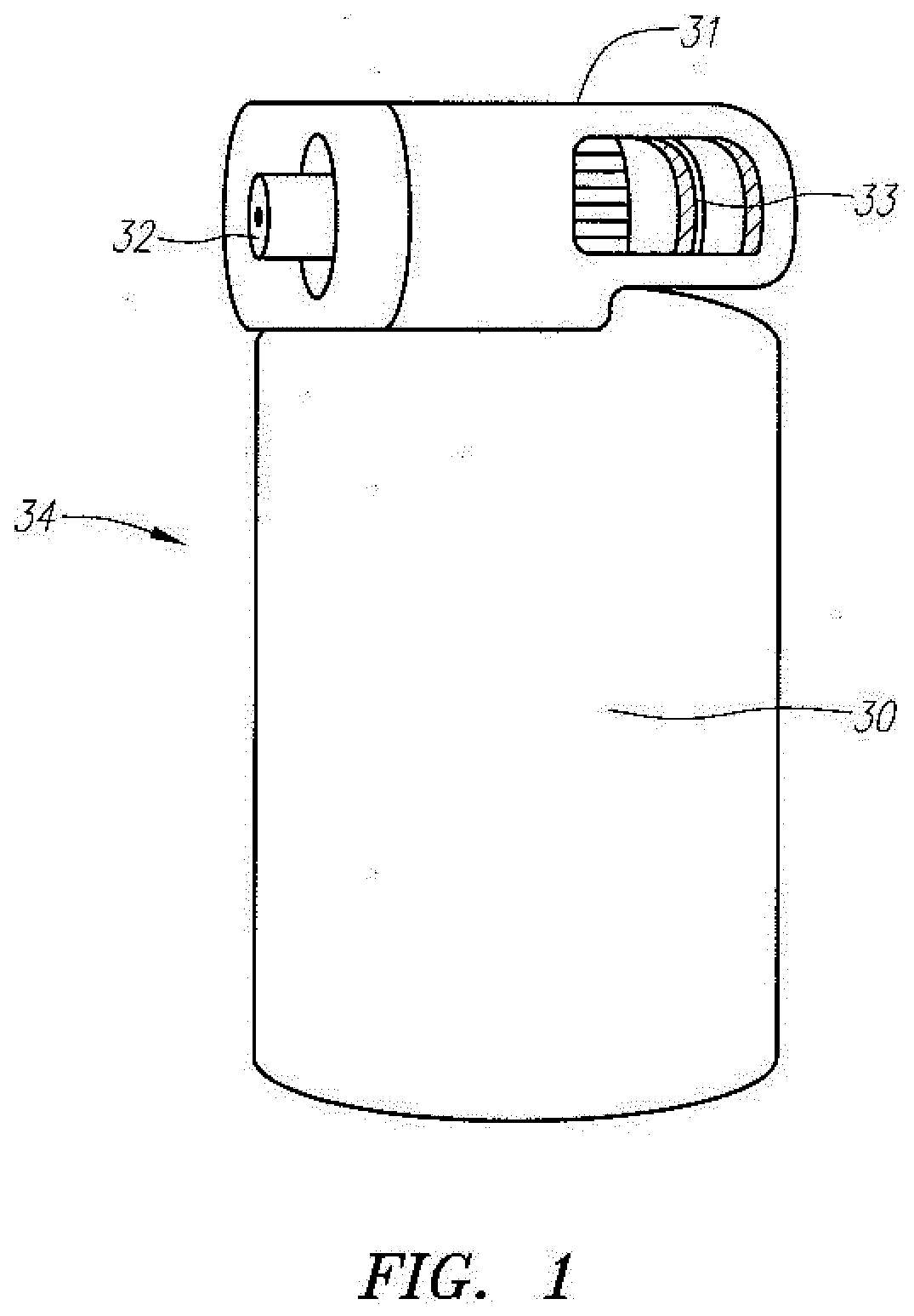 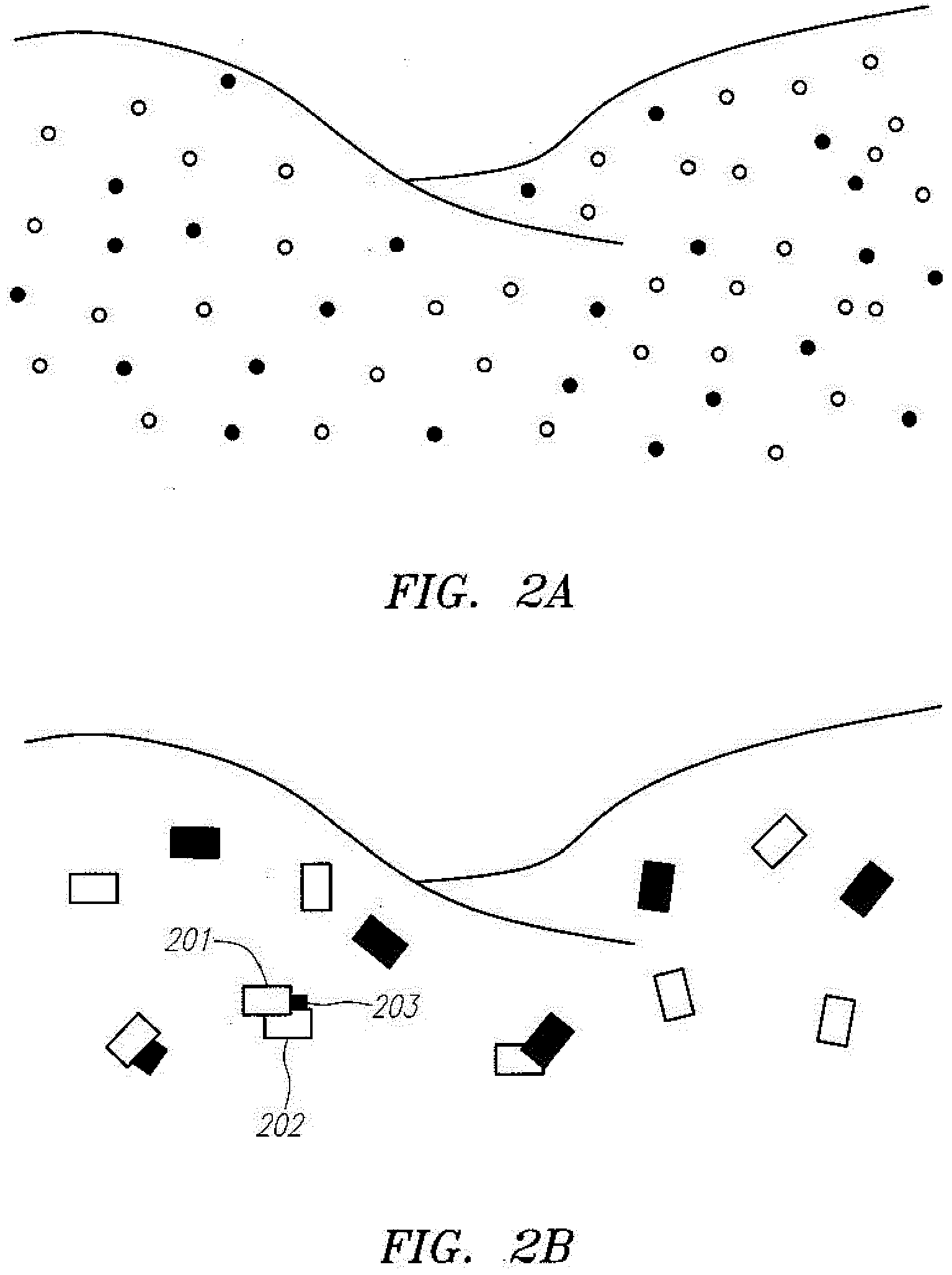 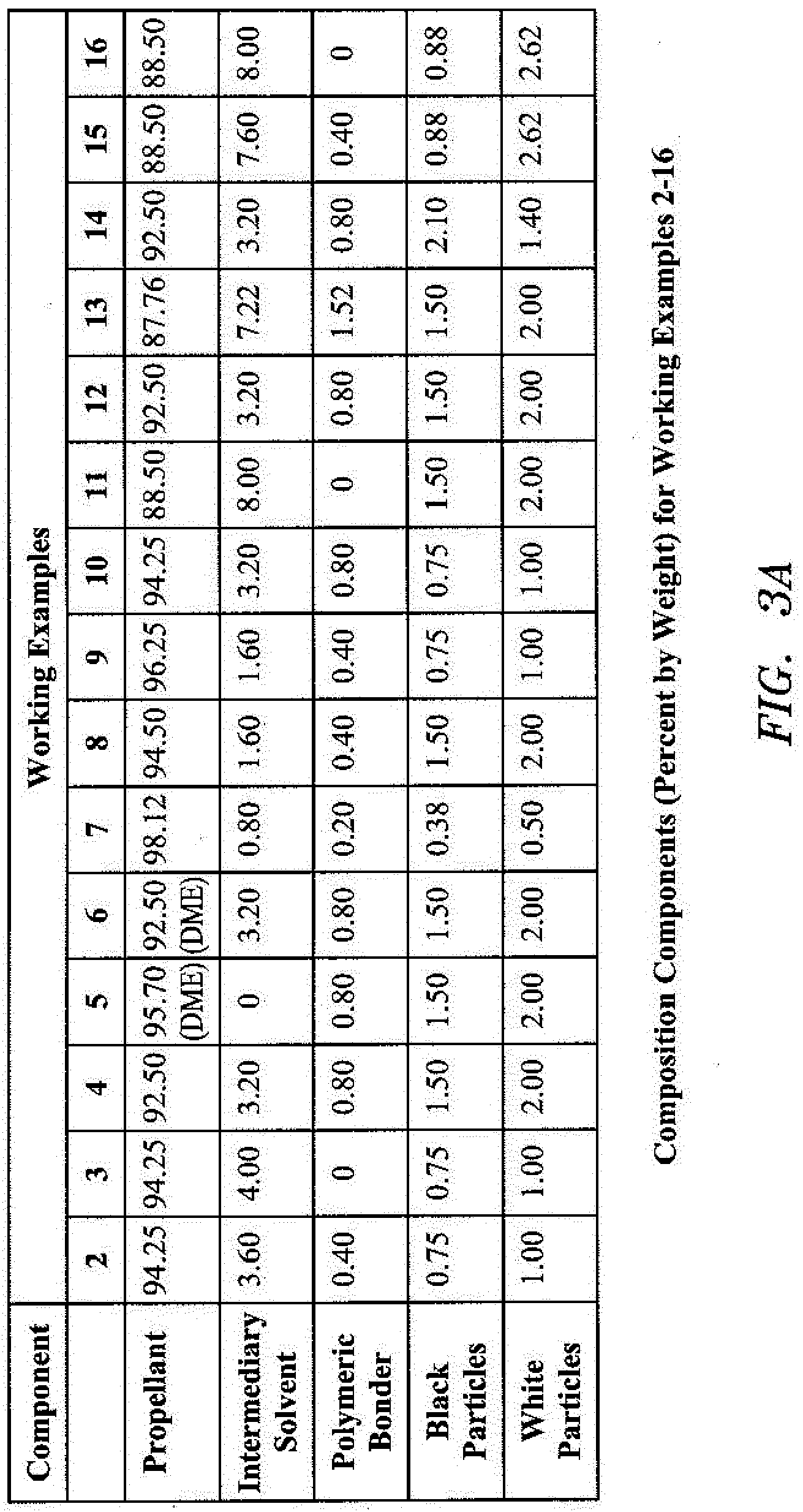 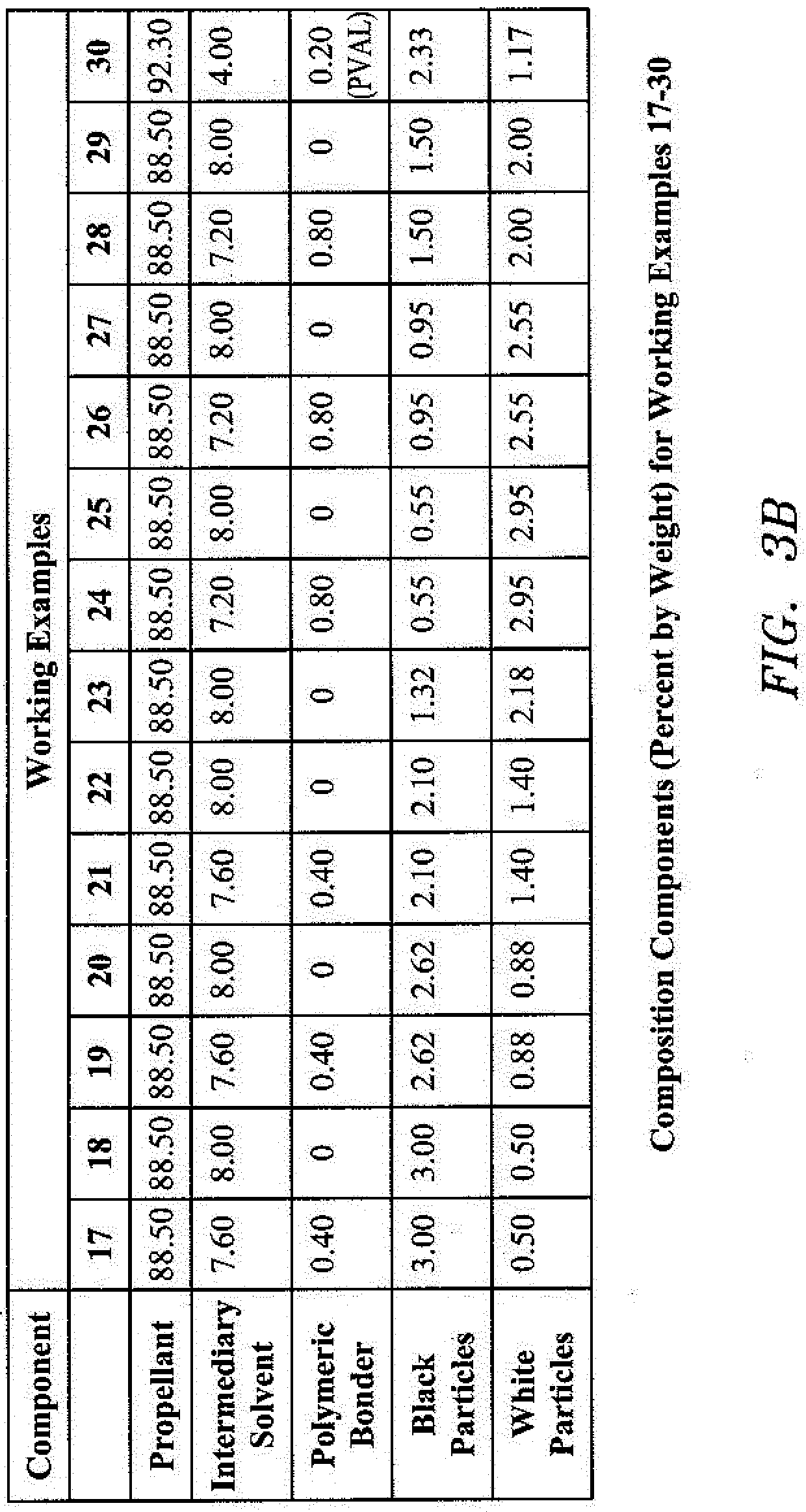