[0002] It is well known to capture image data using digital image sensors. An array of light sensitive picture elements (pixels) is provided, which can be manufactured as charge coupled devices or using complementary metal oxide semiconductor (CMOS) techniques. Incident radiation causes a charge to be generated at each pixel. This charge is converted to a voltage whose value is then digitised. The value of the voltage depends upon the intensity of the illumination incident on the pixel during an integration time, when the pixels are set in a light sensitive mode. A pixel array can be formed in one, two or three dimensions. The most common form is a two dimensional pixel array as found in everyday cameras for example. A one dimensional pixel array is typically referred to as a "linear array", and an image sensor with such an array can be termed a linear sensor or a linear scanner.
[0003] The set of intensity values derived from the pixel array is known as image data. The "raw" image data output by the pixel array may be subjected to various post- processing techniques in order to reproduce an image either for viewing by a person or for processing by a machine. These post-processing techniques can include various statistical methods for image analysis and for performing various camera and image processing functions.
[0004] One example of such techniques is the recognition and/or classification of textures within an image. The texture can represent surface characteristics of an object or region, and can be used as a basis for identifying different objects or different regions of an object within an image. Modelling texture is usually characterised by variations in signal intensity, and sometimes the spatial relationship (local neighbourhood properties) of these variations in an image.
[0005] It is known to use two dimensional wavelet transforms in a method for modelling texture. Wavelet transforms are useful because they give the ability to construct a time-frequency representation of a signal that offers very good time and frequency localisation.
[0006] An introduction to wavelets can be found from US 2010/0014761 and is provided below in the detailed description section.
[0007] Further background is provided in the article titled "Segmenting Multiple Textured Objects Using Geodesic Active Contour and DWT" by S. Prakash et al., published in the International Conference on Pattern Recognition and Machine Intelligence (PReMI 2007), at pages 111-118 on 18 December 2007. The article addresses the issue of segmenting multiple textured objects in presence of a background texture. The proposed technique is based on Geodesic Active Contour (GAC) and can segment multiple textured objects from the textured background. For an input texture image, a texture feature space is created using scalogram obtained from discrete wavelet transform (DWT). Then, a 2-D Riemannian manifold of local features is extracted via the Beltrami framework. The metric of this surface provide a good indicator of texture changes, and therefore, is used in GAC algorithm for texture segmentation. The main contribution in this work lie in the development of new DWT and scalogram based texture features which have a strong discriminating power to define a good texture edge metric which is used in GAC technique. The described technique is validated using a set of synthetic and natural texture images.
[0008] However these methods are not tolerant to fragmentation of the textural features being measured, that is, when the textural features comprise diffuse, irregular, broken or spaced patterns in the image. There are also limits to the resolution and resolving power of existing techniques.
[0009] There is therefore a need for a method that is more robust to fragmentation in the textural images, and/or that has improved resolution, and/or that has an improved resolving power with respect to existing wavelet based techniques.

[0011] Embodiments of the present invention are described, by way of example only, with reference to the accompanying drawings in which:

Figure 1 illustrates steps of an exemplary algorithm according to a first embodiment of the present invention;

Figure 2 illustrates aspects of the step of mapping an image along slice coordinates illustrated in Figure 1;

Figure 3 illustrates aspects of the step of computing a wavelet scalogram of a slice map as illustrated in Figure 1;

Figure 5 illustrates aspects of the step of mapping ridge features on a scalogram surface as illustrated in Figure 1;

Figure 6 illustrates aspects of the steps of superimposing ridge features for each slice into a ridge composite mapping, generating a features position histogram and thresholding the histogram, to determine a frequency of upper components as illustrated in Figure 1;

Figure 7 illustrates aspects of the step of outputting a feature count over an image's selected region as illustrated in Figure 1;

Figure 8 illustrates an exemplary embodiment for wavelet based surface texture mapping for a retinal image region showing a step where an image is mapped in radial slices;

Figure 9 illustrates the superimposition of slices shown in Figure 8 in an orthogonal texture image with equal sample intervals;

Figure 10 illustrates the condensing of the information from Figure 9 into the frequency domain in the form of overlaid scalograms for each slice of the orthogonal texture image;

Figure 11 illustrates a peak in wavelet scale entropy from the diagram of Figure 10, used to parameterise the retinal texture;

Figure 12 illustrates a further aspect of wavelet based surface texture mapping for the retinal region showing a step where a radial scan is imaged to map the extent of retinal texture characteristics;

Figure 14 illustrates an exemplary application of a textural classification method according to an embodiment of the present invention.

means for receiving image data from an image sensor; and

a processor arranged to:

repeat steps (i), (ii) and (iii) for one or more mapped image slices;

superimpose the mapped ridge features from the slices; and

[0034] There is also described a computer program product encoded with instructions that when run on a computer, cause the computer to receive image data and perform a method of image processing comprising: repeating steps (i), (ii) and (iii) for one or more mapped image slices;
superimposing the mapped ridge features from the slices; and
deriving textural information from said superimposed mapped ridge features.
[0035] The computer program product may be stored on or transmitted over as one or more instructions or code on a computer-readable medium. Computer-readable media includes both computer storage media and communication media including any medium that facilitates transfer of a computer program from one place to another. A storage media may be any available media that can be accessed by a computer. By way of example such computer-readable media can comprise RAM, ROM, EEPROM, CD-ROM or other optical disk storage, magnetic disk storage or other magnetic storage devices, or any other medium that can be used to carry or store desired program code in the form of instructions or data structures and that can be accessed by a computer. Also, any connection is properly termed a computer-readable medium. For example, if the software is transmitted from a website, server, or other remote source using a coaxial cable, fiber optic cable, twisted pair, digital subscriber line (DSL), or wireless technologies such as infrared, radio, and microwave, then the coaxial cable, fiber optic cable, twisted pair, DSL, or wireless technologies such as infrared, radio, and microwave are included in the definition of medium. Disk and disc, as used herein, includes compact disc (CD), laser disc, optical disc, digital versatile disc (DVD), floppy disk and Blu-ray disc where disks usually reproduce data magnetically, while discs reproduce data optically with lasers. Combinations of the above should also be included within the scope of computer-readable media. The instructions or code associated with a computer-readable medium of the computer program product may be executed by a computer, e.g., by one or more processors, such as one or more digital signal processors (DSPs), general purpose microprocessors, ASICs, FPGAs, or other equivalent integrated or discrete logic circuitry.
[0036] The following introductory description of wavelets is taken from US 2010/0014761, with some minor modifications:

where '∥' is the modulus operator. The scalogram may be rescaled for useful purposes. One common resealing is defined as

where fc, the characteristic frequency of the mother wavelet (i.e., at a=1), becomes a scaling constant and f is the representative or characteristic frequency for the wavelet at arbitrary scale a.
[0043] Any suitable wavelet function may be used in connection with the present disclosure. One of the most commonly used complex wavelets, the Morlet wavelet, is defined as:

where f0 is the central frequency of the mother wavelet. The second term in the parenthesis is known as the correction term, as it corrects for the non-zero mean of the complex sinusoid within the Gaussian window. In practice, it becomes negligible for values of f0>>0 and can be ignored, in which case, the Morlet wavelet can be written in a simpler form as

[0044] This wavelet is a complex wave within a scaled Gaussian envelope. While both definitions of the Morlet wavelet are included herein, the function of equation (6) is not strictly a wavelet as it has a non-zero mean (i.e., the zero frequency term of its corresponding energy spectrum is non-zero). However, it will be recognized by those skilled in the art that equation (6) may be used in practice with f0>>0 with minimal error and is included (as well as other similar near wavelet functions) in the definition of a wavelet herein.

An Introduction to Image Forming

(ii) computing (108) a wavelet scalogram of the slice;

(iii) identifying (110) ridge features within the wavelet scalogram;
repeating steps (i), (ii) and (iii) for one or more further slices;
concatenating (112) the identified ridge features from the slices such that they are representable in a two-dimensional ridge composite mapping (618); and
determining (116) a spatial frequency of the uppermost components of said concatenated identified ridge features by thresholding a histogram representation (620) of the ridge composite mapping (618).

a straight line which is angled away from the horizontal or vertical axes defined by the rows and columns of the image data pixels; or

at least a part of a circular path.

selecting a scale of an applied wavelet transform to match a chosen feature size; or

selecting a characteristic frequency of an applied wavelet transform to match a chosen shape. 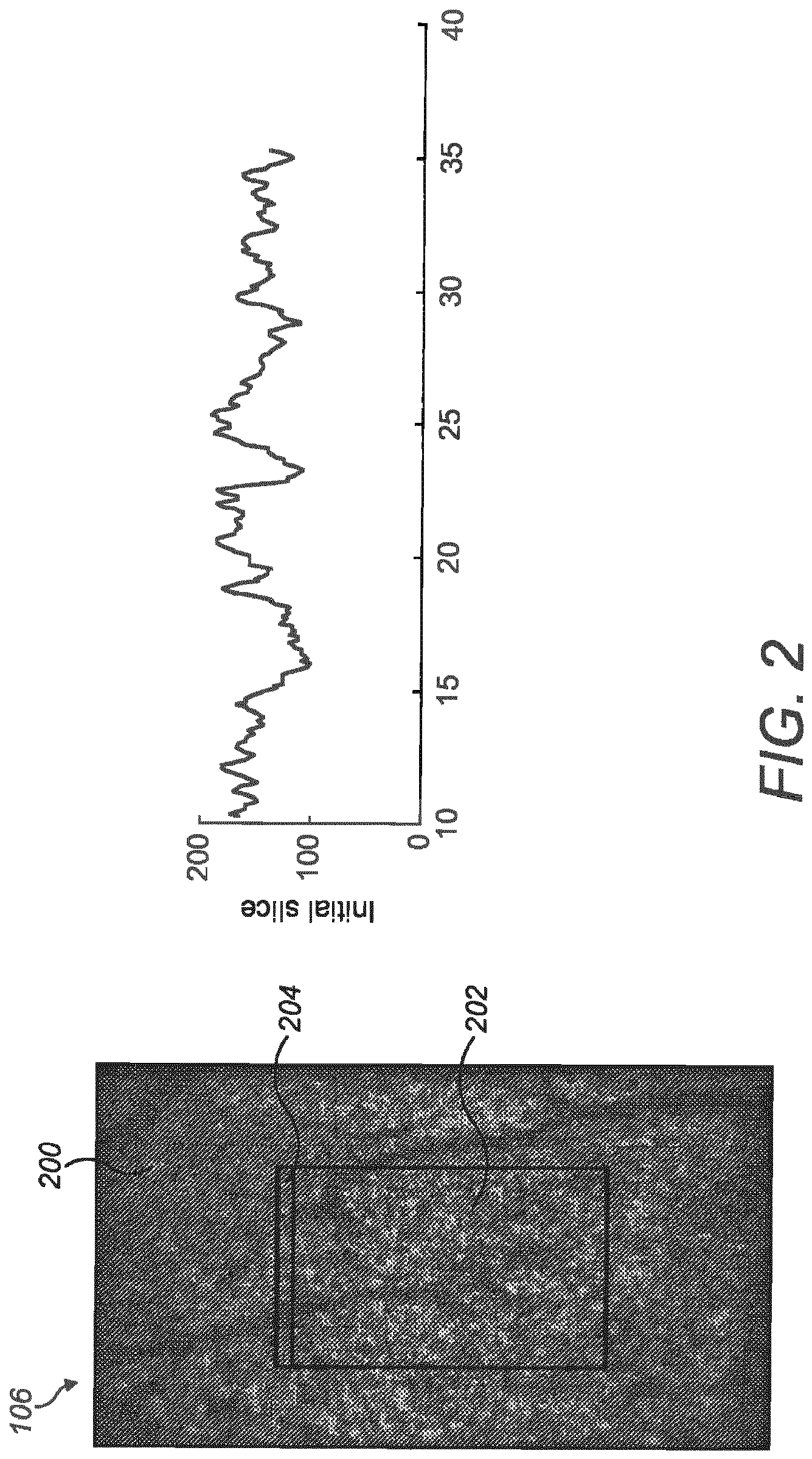 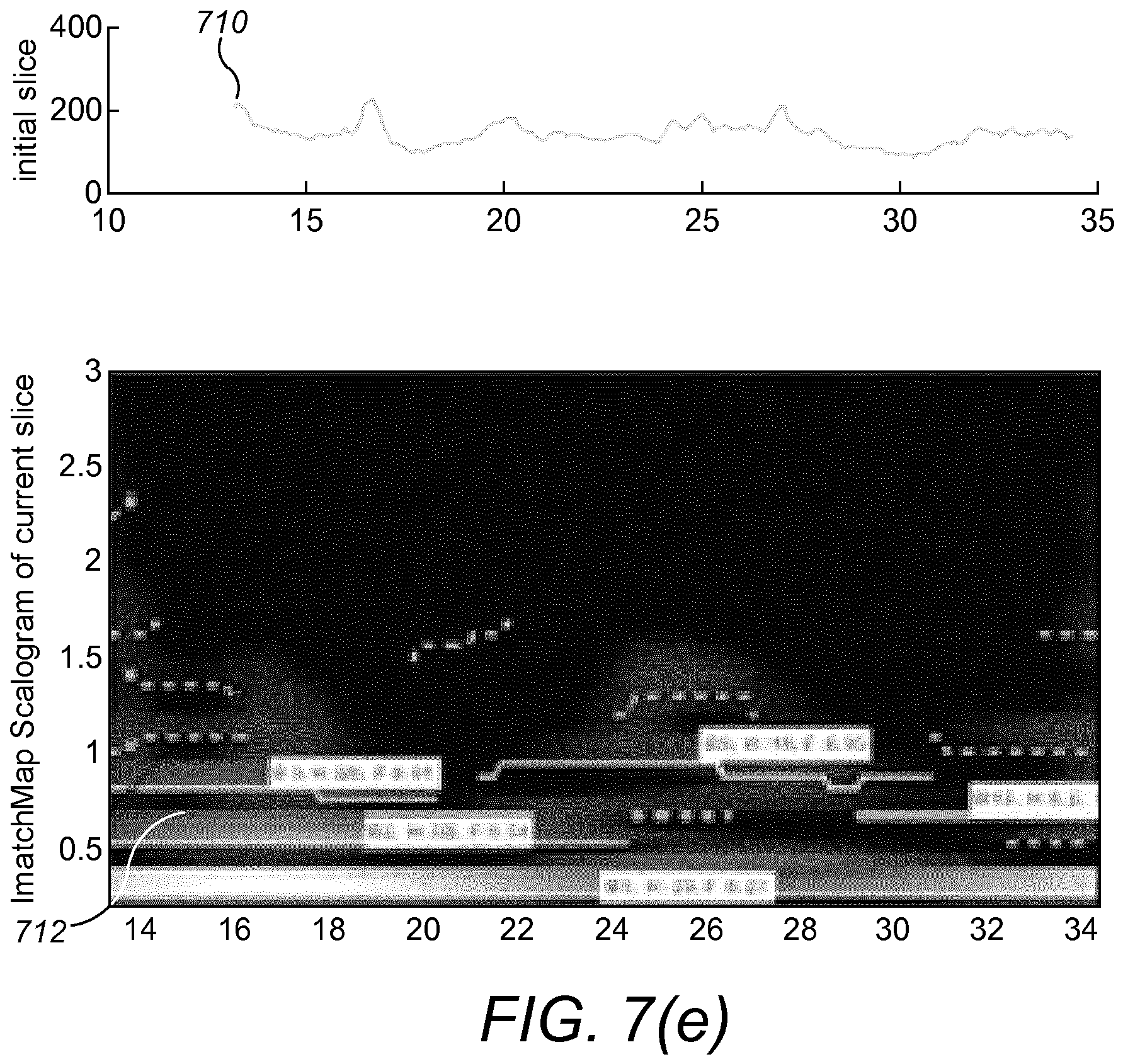 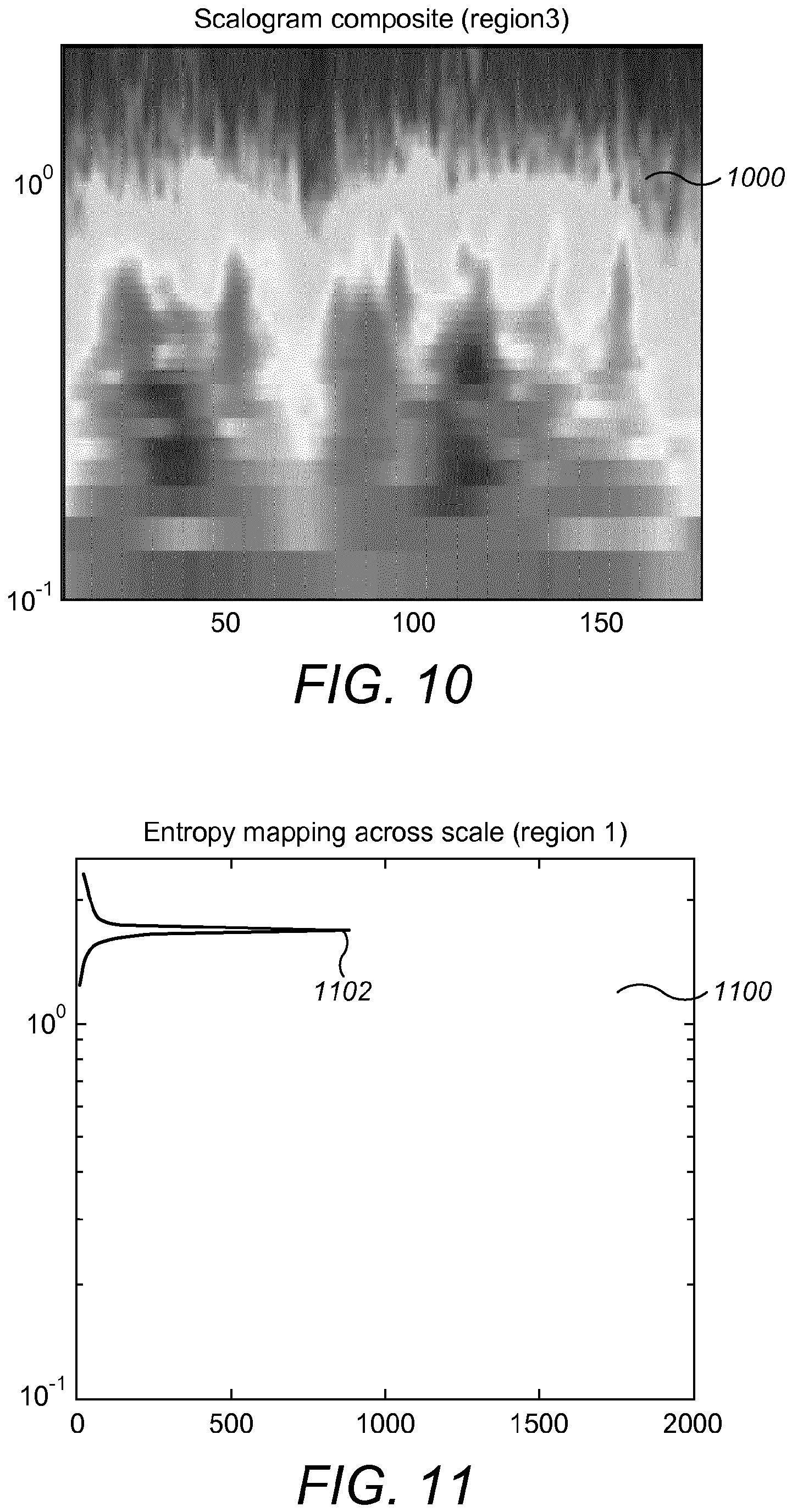 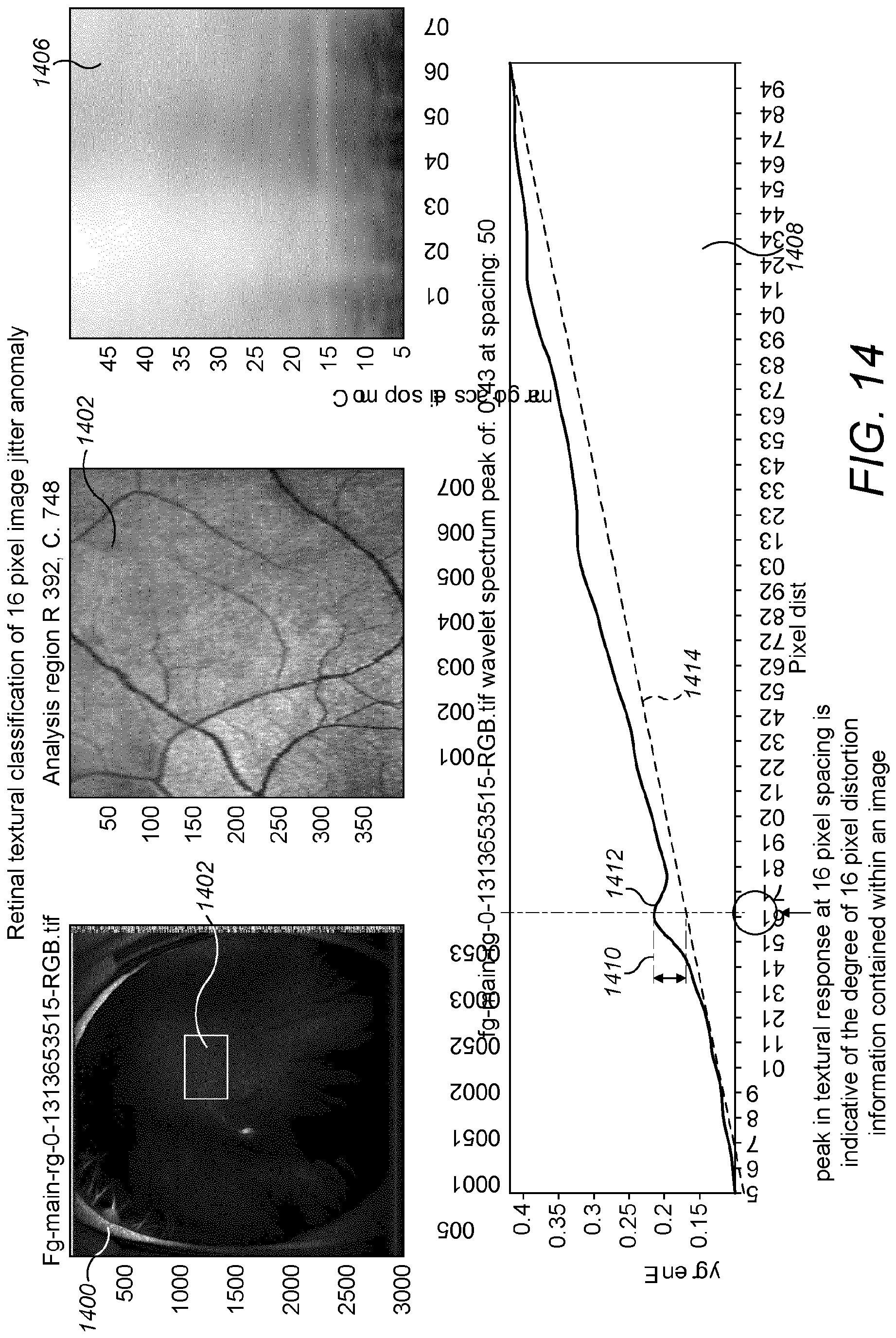