[0001] This present invention relates to fibroblast growth factor 21 (FGF21) variants, pharmaceutical compositions comprising FGF21 variants, and methods for treating type 2 diabetes, obesity, dyslipidemia, and/or metabolic syndrome.
[0002] FGF21 is a hormone that functions as an important metabolic regulator of glucose and lipid homeostasis. FGF21 promotes glucose uptake in adipocytes by up-regulating GLUT1 expression, a mechanism distinct from that of insulin. In diabetic rodents and monkeys, human FGF21 lowered fasting serum concentrations of glucose, and reduced fasting serum concentrations of triglycerides, insulin and glucagon. Furthermore, in rodent models of diet induced obesity, FGF21 administration led to cumulative body weight loss in a dose dependent manner. Thus, FGF21 has potential utility for the treatment of diabetes, obesity, dyslipidemia, and metabolic syndrome.
[0003] Variants of human FGF21 have been described in WO2010/084169, WO2010/065439, WO2006/028595, and WO2005/061712.
[0004] Problems associated with human wild type FGF21 and known FGF21 variants are a low potency and/or pharmaceutical stability of the molecules. Thus, there is still a need for alternative FGF21 variants that are potent and/or stable.
[0005] The present invention provides alternative FGF21 variants. The FGF21 variants of the present invention have advantages over human wild type FGF21 and known FGF21 variants disclosed in the art. These advantages include having improved potency and/or improved pharmaceutical stability. In addition to improved potency, the FGF21 variants of the present invention have one or more advantageous stability characteristics that are useful for efficient manufacturing and/or formulation as a therapeutic protein, including reduced proteolytic degradation in vivo, reduced susceptibility to oxidation, lowered propensity to aggregate at high concentrations, lowered levels of post-translational modifications and proteolysis during production in mammalian cell systems, and/or improved chemical stability. Additionally, the FGF21 variants of the present invention are potentially useful for the treatment of type 2 diabetes, obesity, dyslipidemia, and/or metabolic syndrome.
[0006] The present invention provides a FGF21 variant, wherein the amino acid sequence is

[0038] The FGF21 variants of the present invention are produced in a mammalian cell expression system using CHOK1SV cells. Genes coding for FGF21 variants are subcloned into the Glutamine Synthetase (GS)-containing expression plasmid backbones (pEE12.4-based plasmids). The cDNA sequence encoding the FGF21 variants is fused in frame with the coding sequence of preferred signal peptide sequences to enhance secretion of the desired product into the tissue culture medium. The preferred signal peptide sequences are the polypeptides as shown in the amino acid sequences SEQ ID NO:3, SEQ ID NO:4, SEQ ID NO:5, or SEQ ID NO:6.
[0039] The expression is driven by the viral cytomegalovirus (CMV) promoter. CHOK1SV cells are stably transfected using electroporation and the appropriate amount of recombinant expression plasmid, and the transfected cells are maintained in suspension culture, at the adequate cell density. Selection of the transfected cells is accomplished by growth in methionine sulfoximine (MSX)-containing serum-free medium and incubated at 35-37 °C and 5-7 % CO2.
[0040] Clonally-derived cell lines are measured and determined by use of a flow cytometer. The expression of an FGF21 variant in mammalian cells generally yields the natural N-terminal sequence, HPIP, i.e. without a methionine residue at the N-terminus, such as the FGF21 variant shown by the amino acid sequence of SEQ ID NO:1.
[0041] FGF21 variants secreted into the media from the CHO cells are purified by a process by which the clarified cell culture medium is heated to 50-60 °C for up to two hours, cooled, treated with detergent (Triton X-100) for viral inactivation, and is applied to a Capto MMC (GE Healthcare) mixed mode chromatography column. The FGF variant is eluted from the column using a pH 8 buffer, and the subsequent product pool is adjusted with 50 mM citric acid, 150 mM NaCl solution to a pH range of 3.2 to 3.5 for one hour for viral inactivation. The solution is adjusted to pH 6.7 to 7.3 by addition of Tris buffer and the FGF variant is further purified by hydrophobic exchange chromatography using Phenyl Sepharose High Performance resin (GE Healthcare). The hydrophobic interaction column is eluted with a decreasing gradient of sodium sulfate at pH 7. The HIC purified FGF variant is buffer exchanged into a Tris buffer at pH 8 containing NaCl and is further purified by anion exchange chromatography on Source 30Q resin (GE Healthcare). The anion exchange column is eluted with an increasing concentration of sodium chloride at pH 8. Purified FGF variant is passed through a Planova 20N (Asahi Kasei Medical) viral retention filter followed by concentration/diafiltration into 10 mM citrate, 150 mM NaCl pH 7 using tangential flow ultrafiltration on a regenerated cellulose membrane (Millipore).

[0042] 3T3-L1-βKlotho fibroblasts are generated from 3T3-L1 fibroblasts by retroviral transduction of a CMV-driven mammalian expression vector containing the coding sequence of wild type mouse βKlotho and a blasticidin resistance marker. Blasticidin-resistant cells are selected after growth for 14 days in the presence of 15 µM blasticidin, and βKlotho variant expression is verified by immunoblot with an anti-βKlotho antibody. The 3T3-L1-βKlotho fibroblasts are maintained in Dulbecco's Modified Eagle Medium (DMEM) with 10 % calf serum, and 15 µM blasticidin until plated for experimental use.
[0043] For glucose uptake, 3T3-L1-βKlotho fibroblasts are plated at 20,000 cells/well in 96-well plates and incubated for 48 hours in DMEM with 10% calf serum. The cells are incubated for 3 hours in DMEM with 0.1 % bovine serum albumin (BSA) with or without an FGF21 variant of interest, followed by 1 hour incubation in Krebs-Ringer phosphate (KRP) buffer (15 mM Hepes, pH 7.4, 118 mM NaCl, 4.8 mM KCl, 1.2 mM MgSO4, 1.3 mM CaCl2, 1.2 mM KH2PO4, 0.1 % BSA) containing 100 µM 2-deoxy-D-(14C) glucose with or without an FGF21 variant. Non-specific binding is determined by incubation of select wells in Krebs-Ringer bicarbonate/Hepes (KRBH) buffer containing 1 mM 2-deoxy-D-(14C) glucose. The reaction is terminated by addition of 20 µM cytochalasin B to the cells and glucose uptake is measured using a liquid scintillation counter.
[0044] The in vitro potency (EC50) of the FGF21 variant of SEQ ID NO: 1 in the 3T3-L1-βKlotho fibroblast glucose uptake assay is 0.051 µM.

[0049] Production of a homogeneous variant product is desirable since it better ensures a consistent and well-characterized product. To assess product heterogeneity, a 10 µL aliquot of the sample is mixed with 90 µL of DPBS. The sample is analyzed by liquid chromatography-mass spectrometry (LC-MS), using the following conditions: the mobile phase A is 0.05 % TFA, the mobile phase B is 0.04 % TFA in acetonitrile, the column is a PLRPS 2.1 X 50 mm column, the injection volume is 15 µL.
Table 2 : Gradient Conditions for Liquid Chromatographic Separation
A Waters Micromass LCT Premier™ mass spectrometer is set up to a mass range between 400 to 1990 amu, polarity ES+, capillary 3000, sample cone 40 V, aperture 1 is 25 V, the source temperature is 105 °C, cone gas flow is 50 L/hour, desolvation temperature is 150 °C, and the desolvation gas flow is 600 L/hour.
Table 3 : LC/MS Characterization of FGF21 Variants

[0052] Male ob/ob mice and age-matched ob/m (lean) controls are 7 weeks of age upon arrival and 8-9 weeks of age at initiation of treatment. Upon arrival, all mice are single housed and allowed to acclimate for 1-2 weeks before the start of treatment. The mice are fed Purina Rodent Chow 5015 and given house water from an auto-water apparatus ad libitum. The mice are housed in 12-hour light/dark cycle with ambient temperature set at 75 °F. One to two days prior to initiation of treatment, blood samples are collected via tail bleed. Blood glucose levels are measured using an Accu-Check Avivia blood glucose meter (Roche) and serum samples are collected for the assay of insulin using the Meso Scale mouse/rat insulin assay kit. On the day of treatment initiation (day 0), the mice are sorted into groups based on the pretreatment body weight, blood glucose, and serum insulin (BRAT sorting software). On day 0 and day 3, mice are dosed SQ with 0.1 to 30 nmol/kg of the FGF21 variant of SEQ ID NO: 5, in a volume of 10 ml/kg. Dosing vehicle is sterile PBS (HyClone DPBS/Modified -Calcium -Magnesium) containing 0.03 % mouse serum albumin (MSA; Sigma A3139). Blood glucose is measured daily for 7 days and the AUC is determined. ED50 calculations for the glucose lowering are based on the AUC. Liver homogenates are collected at the time of sacrifice and liver triglycerides are measured on the Hitachi Modular P clinical analyzer.
[0053] On day 14, vehicle treated mice were hyperglycemic with mean blood glucose levels measured at 348 ± 19.5 mg/dl (mean ± SEM), while ob/m lean control mice had blood glucose levels of 165 ± 3.2 mg/dl (mean ± SEM). The FGF21 variant of SEQ ID NO: 1 lowered blood glucose to levels comparable to the ob/m lean controls. The ED50 of the FGF21 variant of SEQ ID NO: 1 was 1.296 nmol/kg (95 % confidence interval = -0.07 - 0.30). 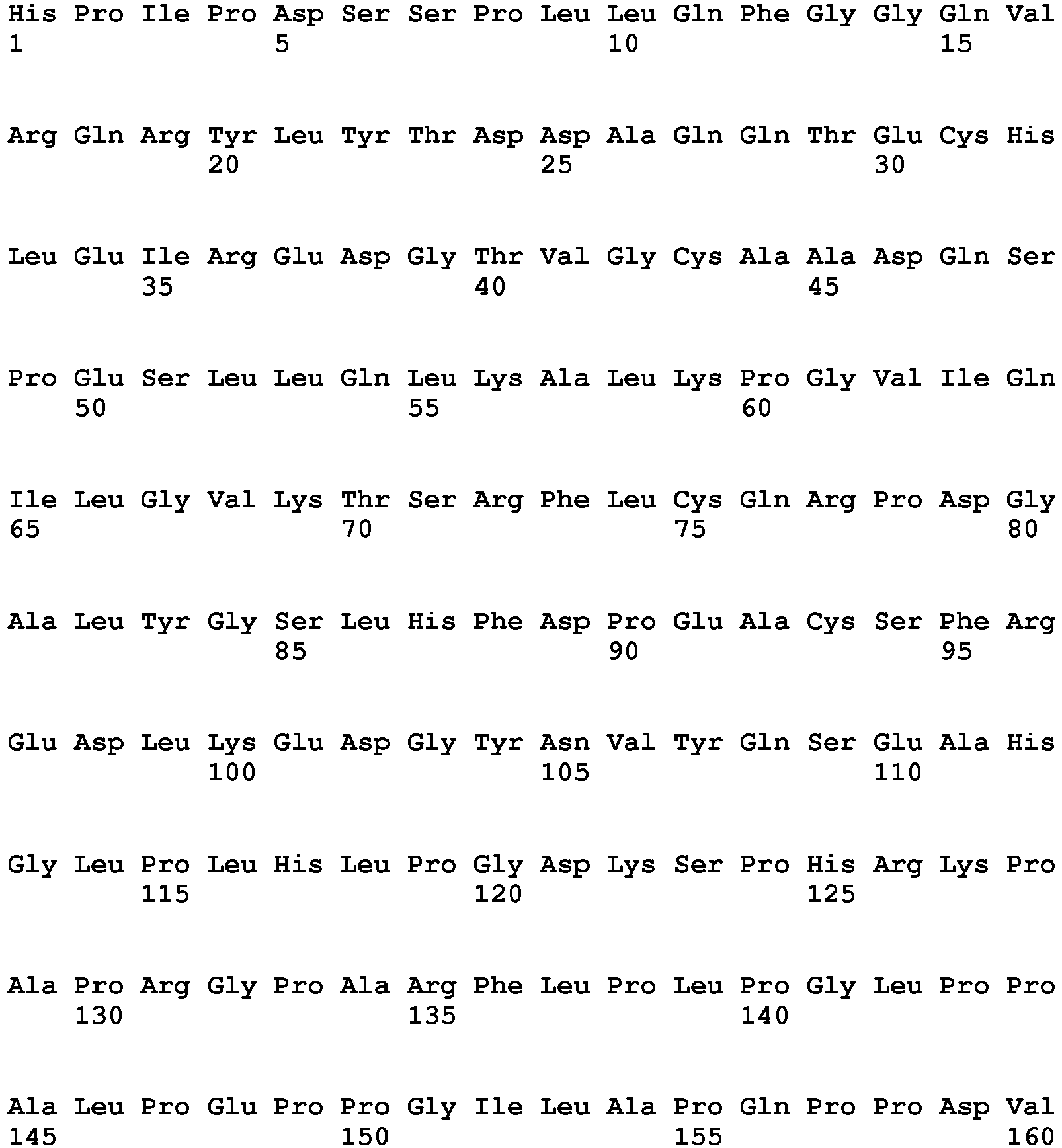 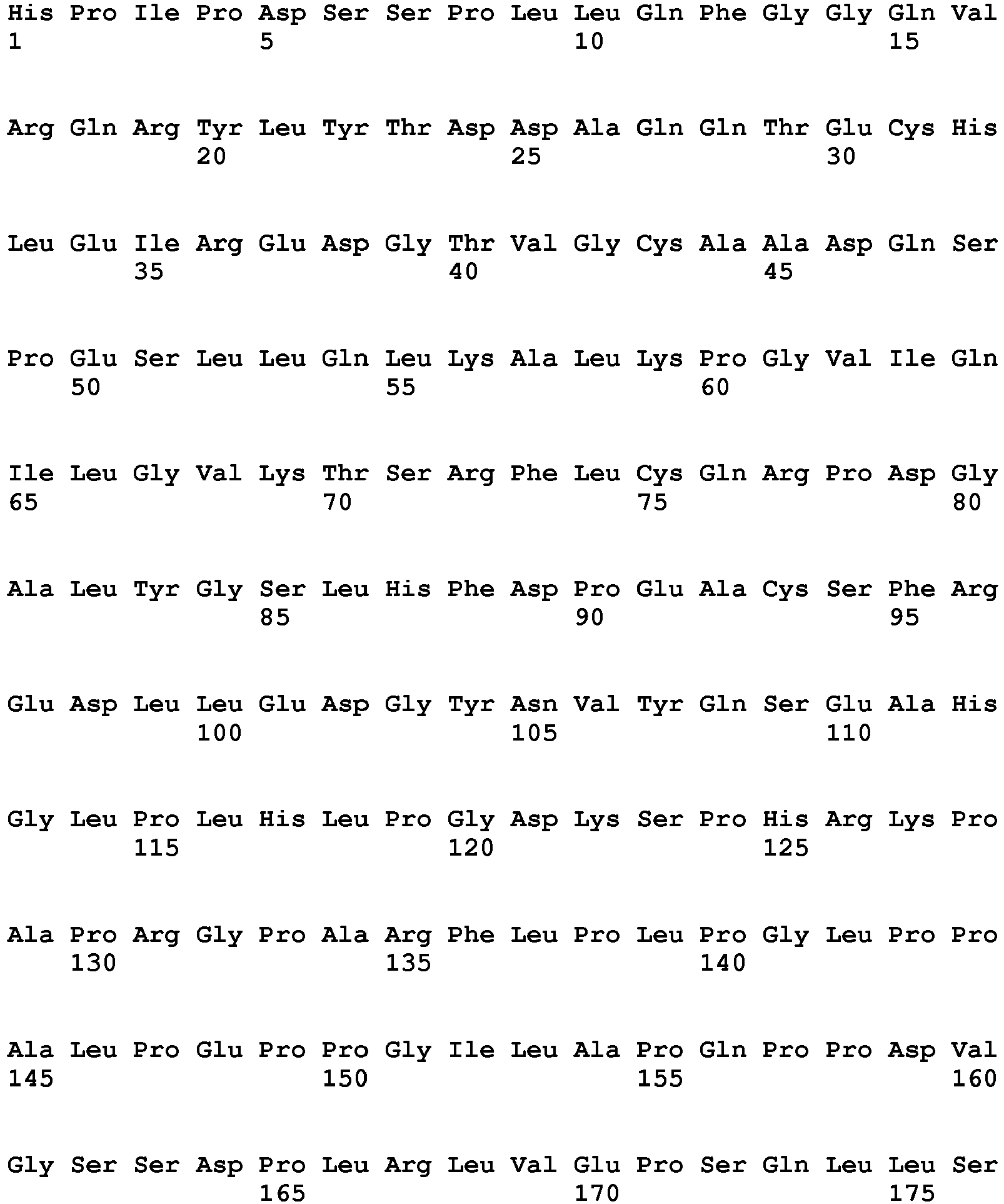 2. A pharmaceutical composition comprising the variant of Claim 1, and at least one pharmaceutically acceptable carrier, diluent, or excipient.

3. The variant of Claim 1 for use in therapy.

4. The variant of Claim 1 for use in the treatment of type 2 diabetes, obesity, dyslipidemia, and/or metabolic syndrome.