OBJECTIVE OF THE INVENTION

where R = |r - r'|, Hr(r) is the absorbed energy density, vs, β, and C are the corresponding speed of sound, isobaric volume expansion, and specific heat coefficients of the medium. For each time point t, the spatial integration is performed over a spherical shell with a radius of R = vst.
[0059] This formulation is valid when assuming that duration of the optical excitation pulse is short enough to be approximated by a delta function, which is true in many practical cases.
[0060] In contrast to back-projection algorithms, model-based schemes are therefore not based on an approximate analytical solution of the opto-acoustic equation. Instead, the forward problem is solved numerically in an iterative optimization algorithm. In each iteration, the reconstructed opto-acoustic image is changed to reduce the error between its corresponding acoustic signals and the measured signals.
[0061] Preferably, by using numerically efficient interpolated-model matrix inversion (IMMI), these methods are not faced with long computation times. IMMI solves Eq. (1) in a highly efficient semi-analytical manner by applying linear interpolation to Hr(r) and performing the integral analytically. This leads to a discretization of Eq. (1), given by the following matrix relation:

where p represents pressure fields measured at different positions (projections), z are values of opto-acoustic image on the defined grid, and M is the acoustic forward-model matrix.
[0062] The opto-acoustic image is obtained by inverting Eq. (2). Two common methods are the Moore-Penrose pseudo-inverse and the least-squares decomposition (LSQR) algorithm. The pseudo-inverse of M is given by

while the reconstructed opto-acoustic image is subsequently obtained via

[0063] The main advantage of using the pseudo-inverse is that it needs to be calculated for a given system only once, allowing for very fast inversion, which can in principle be done in real time. On the other hand, LSQR is an iterative algorithm for solving linear equations. Its main advantage is high efficiency in the case of sparse matrices. In addition, LSQR requires saving only the nonzero elements of the matrix, thus mitigating memory requirements. Since the model matrix M is sparse, LSQR is an extremely efficient method for inverting Eq. (2) when the number of grid points is high.
[0064] Model based methods can further incorporate the detector functional characteristics, such as the impulse response, to yield even more accurate image quality. Further synergistic effects can be achieved by combining optical and opto-acoustic information. For example, information on optical properties from optical microscopy can be employed to model light attenuation as a function of depth, which can be employed in opto-acoustic imaging. Preferably, in the image formation process, especially in high resolution opto-acoustic mesoscopic imaging, a correction for frequency-dependent sound attenuation (dispersion) is performed. As attenuation is frequency dependent, such a correction can be done on a per frequency basis.
[0065] The inventive resolution adaptation potentially can be sensitive to ultrasonic attenuation correction. For frequencies above 40 MHz in particular, ultrasonic attenuation can determine the maximum depth achieved and frequency dependent attenuation correction becomes necessary for quantitative imaging.
[0066] According to another particularly preferred embodiment of the invention, the image processing device is configured for creating not only a hybrid image, but also at least one of an optical image and an opto-acoustic image. In particular, the optical image has the advantage that the arrangement of the acoustic detector device can be done under optical control, i.e. the acoustic detector device can be positioned relative to the object in dependency on optical image data collected from the object. As a further advantage, the optical image data and/or the opto-acoustic image data can be used for reconstructing the opto-acoustic image and the optical image, respectively, and vice versa.
[0067] Generally, the object to be imaged may comprise, e.g., a human or animal subject, or a part thereof, or non-biological matter, like an inner space of a chemical reactor or the like. For medical imaging, the hybrid opto-acoustic mesoscope device can be coupled with an endoscope device. Thus, the light source device, the light detector device and the acoustic detector device are coupled with the endoscope device. Preferably, the acoustic detector device is arranged on a distal portion of the endoscope device, so that hybrid or opto-acoustic images can be collected representing an inner portion of the object investigated.
[0068] Preferably, in the opto-acoustic imaging method according to the invention a multi-spectral opto-acoustic tomography (MSOT) approach is applied, which enables highly sensitive imaging based on contrast mechanisms similar to optical microscopy, such as fluorochromes and fluorescent proteins, intrinsic cellular chromophores and extrinsically administered probes and nanoparticles. In many cases, depending on their concentration, contributions of various photo-absorbing agents, such as contrast agents, targeted probes or nanoparticles may constitute only small signal variances over the background absorption. This may complicate detection of the photo-absorbing agent on single wavelength images, even if the selected wavelength corresponds to the absorption maximum of the agent of interest. When data at multiple wavelengths are obtained however, it is possible to improve the contrast and detection sensitivity by spectral unmixing, i.e. by resolving the spectral signature of the absorber agent used over other non-specific spectral contributions, e. g. from highly absorbing hemoglobin.
[0069] Spectral unmixing methods based on differential or fitting algorithms use the known spectral information to process the image on a pixel-by-pixel basis. Those methods try to find the source component (e.g. a distribution of a certain contrast agent) that best fits its known absorption spectrum in the least-squares sense.
[0070] Given the (n×m) multispectral measurement matrix M, where n is the number of image pixels and m is the number of measurements, as well as the (k×m) spectral matrix S with the absorption coefficients of the k components at the m measurement wavelengths, the data can be unmixed via

where S+ is the Moore-Penrose pseudoinverse of S and Rpinv is the reconstructred spatial distribution (image) of the chromophore of interest.
[0071] In practice, this kind of separation may turn challenging since the exact spectral profile of the background contribution is not always known, e.g. in in-vivo imaging scenario. In addition, the spectral signature of the agent of interest may also be not accurately known, for instance the absorption spectrum may change in different biochemical environments. Moreover, light attenuation and ultrasonic dispersion in tissues leads to a corresponding non-linear relationship between the measured opto-acoustic signals and the corresponding target concentration as a function of depth or target size. This is particularly evident for volumetric tissue imaging since opto-acoustic signals depend on product between local light fluence at different depths and local absorption coefficient of the agent of interest and other background chromophores. Finally, the spectral profile of light propagating in tissue is also altered by depth, since attenuation rate is different depending on wavelength, which may also contribute to intensity variations in the recorded MSOT signals with depth.
[0072] These possible issues in spectral unmixing can be tackled by the use of multivariate data analysis and matrix factorization algorithms, such as principal component analysis (PCA), non-negative matrix factorization (NNMF), multivariate curve resolution (MCR) or independent component analysis (ICA). Principal Component Analysis is a blind source un-mixing technique, that is based on the assumption that the source components are statistically uncorrelated. PCA yields a linear orthogonal transformation into a new coordinate system, in which the largest data variance is projected onto the first principal component, the largest remaining variance onto the second one, and so on. Consequently, the correlated measurement data is unmixed by being transformed to uncorrelated principal components.
[0073] PCA can be calculated as a singular value decomposition of M or as an eigenvalue decomposition of its covariance matrix, i.e.

where U is a transformation matrix that represents absorption spectra of the calculated principal components.
[0074] Independent Component Analysis (ICA) is yet another blind source separation technique, but it is based on a different assumption about the sources than PCA. While the latter assumes uncorrelated sources, ICA finds end members that satisfy the more general and therefore stronger condition of statistical independence. The algorithm seeks a transformation of the dependent mixed spectral components into a set of independent source components and also yields the corresponding mixing matrix UICA. Contrary to the pixel-by-pixel processing approach in the differential and fitting unmixing methods, the key element in multivariate approaches is the unaided identification of changes that are common across various pixels, helping to identify contrast agents that have a non-uniform spatial biodistribution.
[0075] MSOT allows for a powerful performance in imaging of optical contrast deep within several centimeters of living tissues. This is mainly because it can visualize optical absorption with resolution that is not affected by photon scattering. Instead, optical contrast and markers are visualized with high sensitivity and ultrasonic resolution. Using advanced illumination systems, high frequency detectors, and reconstruction methods, the achieved MSOT imaging quality allows for high-resolution imaging within several millimeters of fully scattering tissue.

[0076] Further details and advantages of the invention are described in the following with reference to the attached drawings, which show in:

PREFERRED EMBODIMENTS OF THE INVENTION

1. Imaging apparatus (100) for imaging an object (1) under investigation, in particular a biological object, comprising:

- a light source device (10) arranged for an illumination of the object (1),

- a light detector device (20) arranged for detection of light emitted by the object (1) in response to the illumination of the object (1),

- an acoustic detector device (30) arranged for collecting broadband acoustic signals generated in the object (1) in response to the illumination of the object (1), and

- an image reconstruction device (40) arranged for reconstructing an optical image and an opto-acoustic image of the object (1),

characterized by
a resolution adaptation device (50) configured for adjusting the spatial resolution and the imaging depth of the opto-acoustic image, wherein

2. Imaging apparatus according to claim 1, wherein

3. Imaging apparatus according to one of the foregoing claims, wherein

- the resolution adaptation device (50) includes a drive unit (52) being arranged for moving the acoustic detector device (30) or parts thereof relative to the object (1).

4. Imaging apparatus according to claim 3, wherein

- the acoustic detector device (30) comprises at least one detector element (31) being movable relative to the object (1), and

5. Imaging apparatus according to one of the foregoing claims, wherein

- the resolution adaptation device (50) includes a light source scanning unit (54) arranged for applying a scan pattern to the illumination of the object (1).

6. Imaging apparatus according to one of the foregoing claims, wherein the light source device is adapted for at least one of

- a wide-field illumination of the object (1),

- a single plane illumination of the object (1),

- an illumination of the object (1) with a varying light intensity, in particular a pulsed illumination, and

- an illumination of the object (1) at two or more different wavelengths.

7. Non-invasive and non-endoscopic method for imaging an object (1) under investigation, in particular a biological object, the method comprising the steps of:

- reconstructing an optical image and an opto-acoustic image of the object (1) with an image reconstruction device (40), 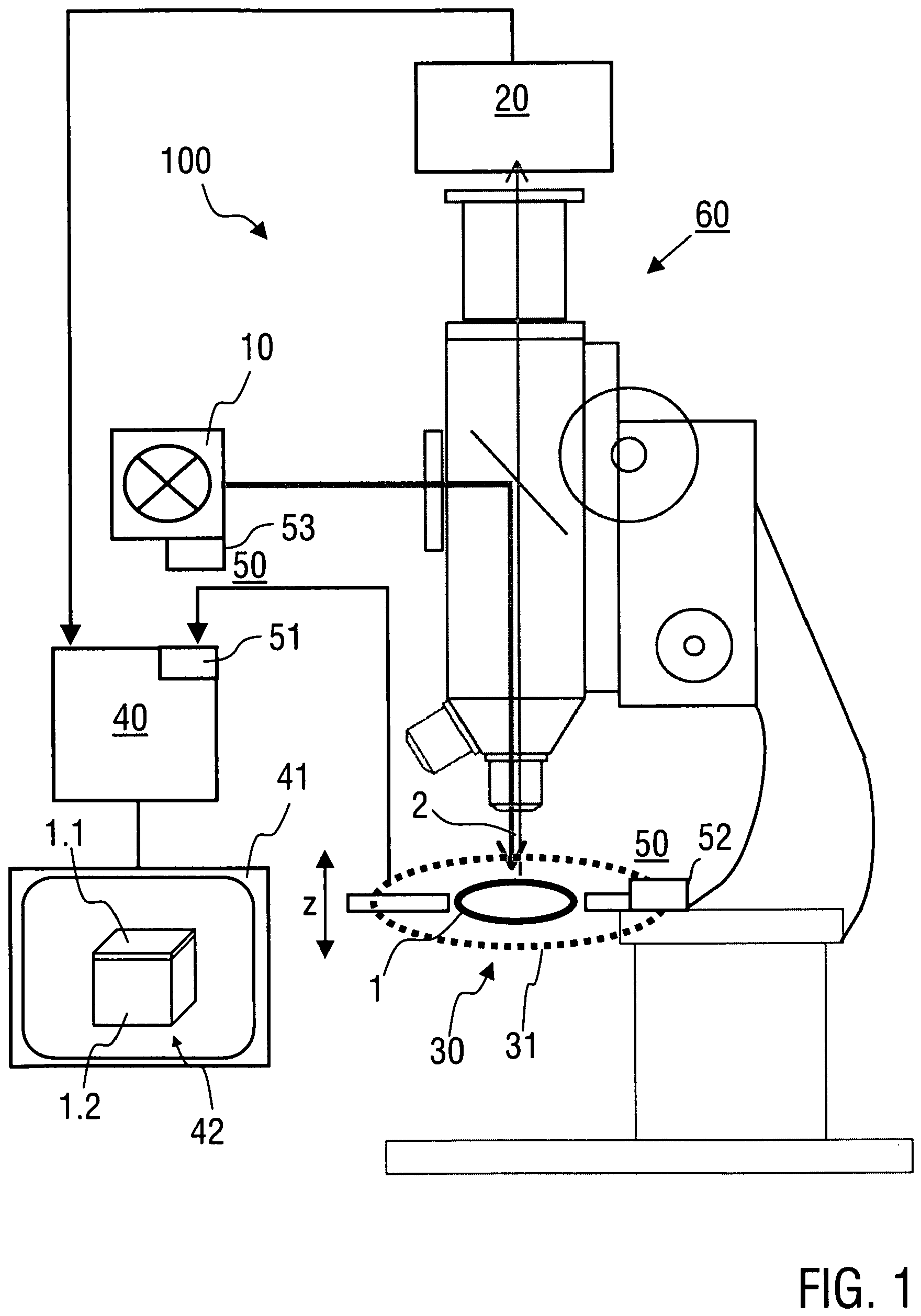 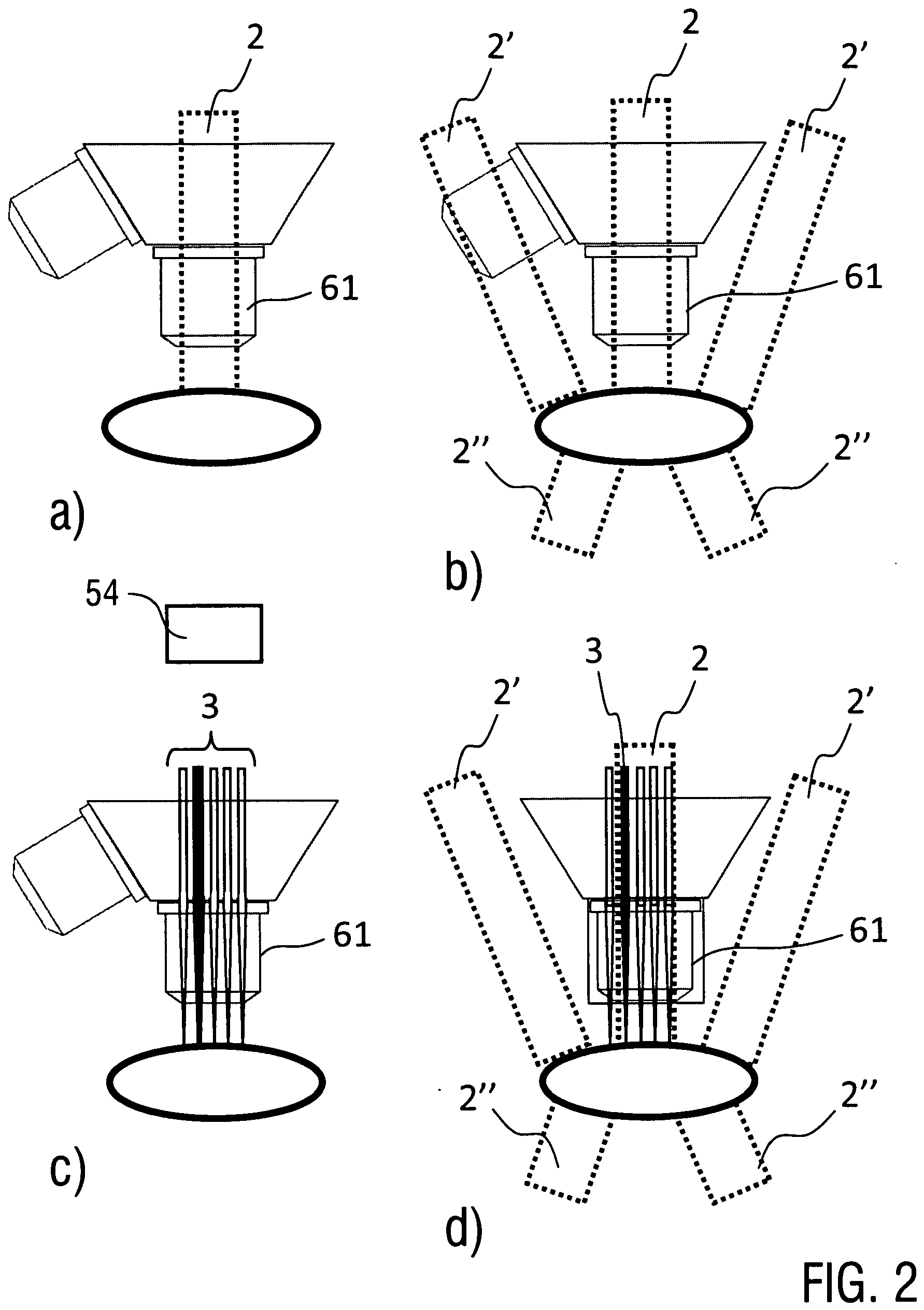 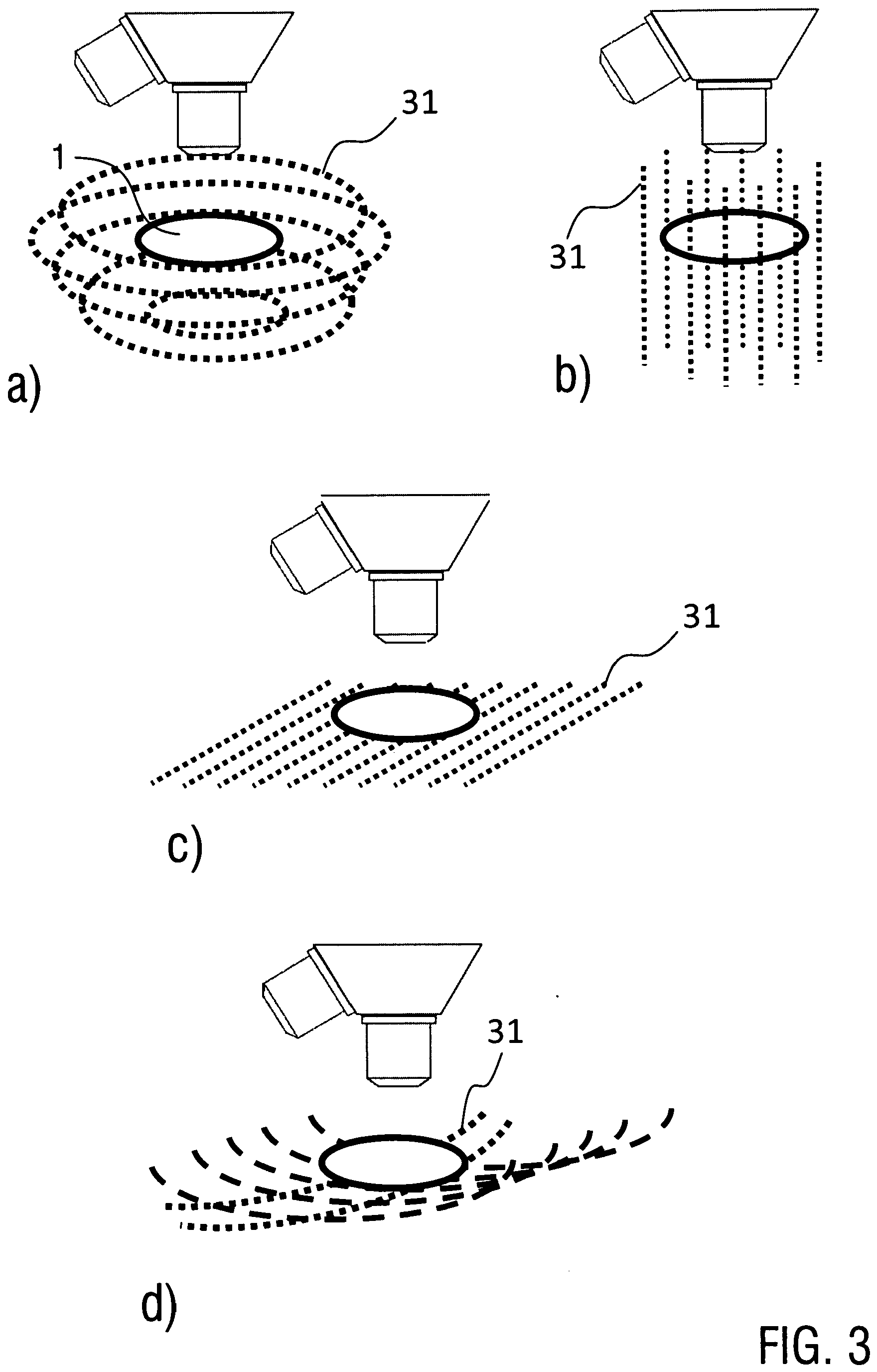 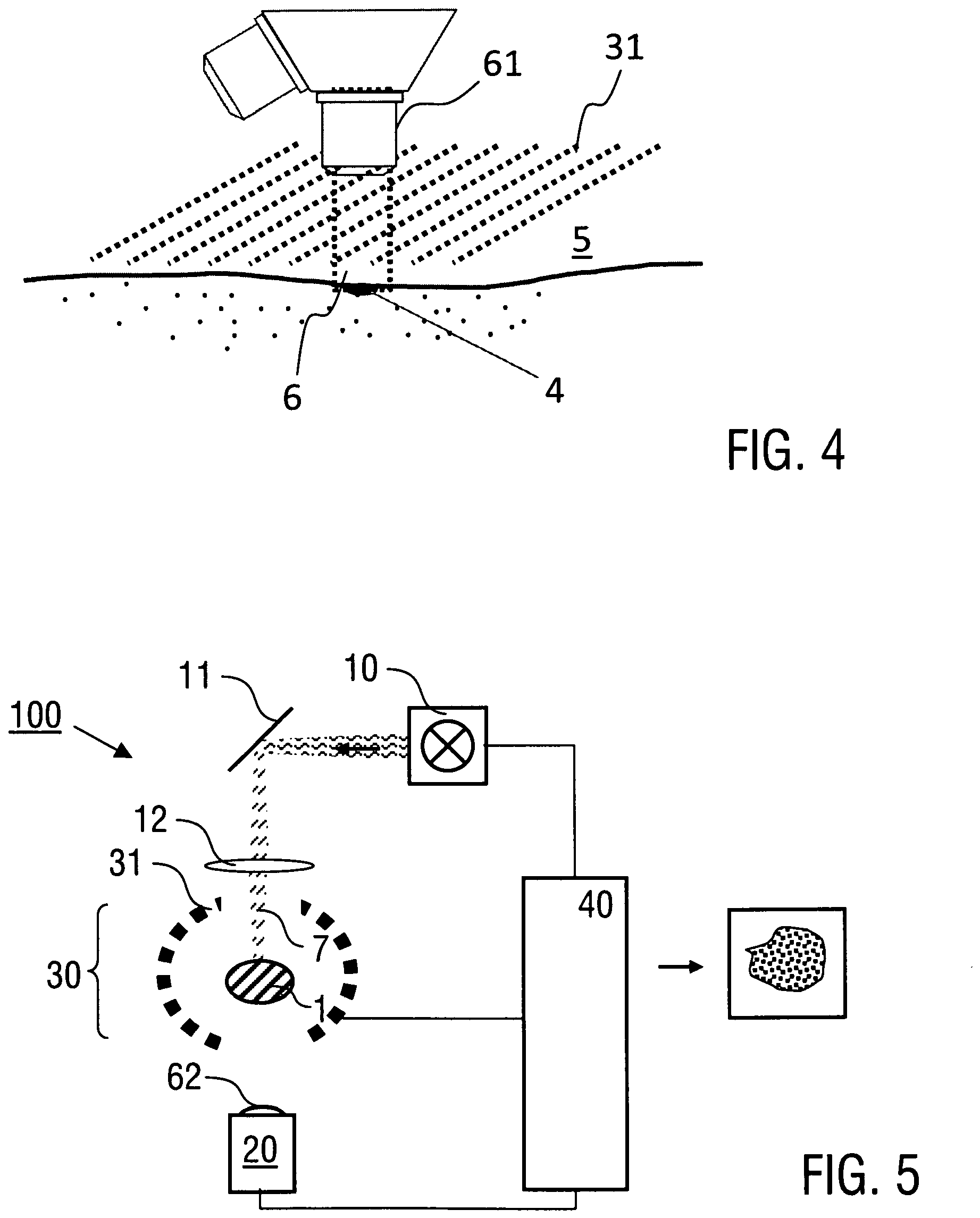 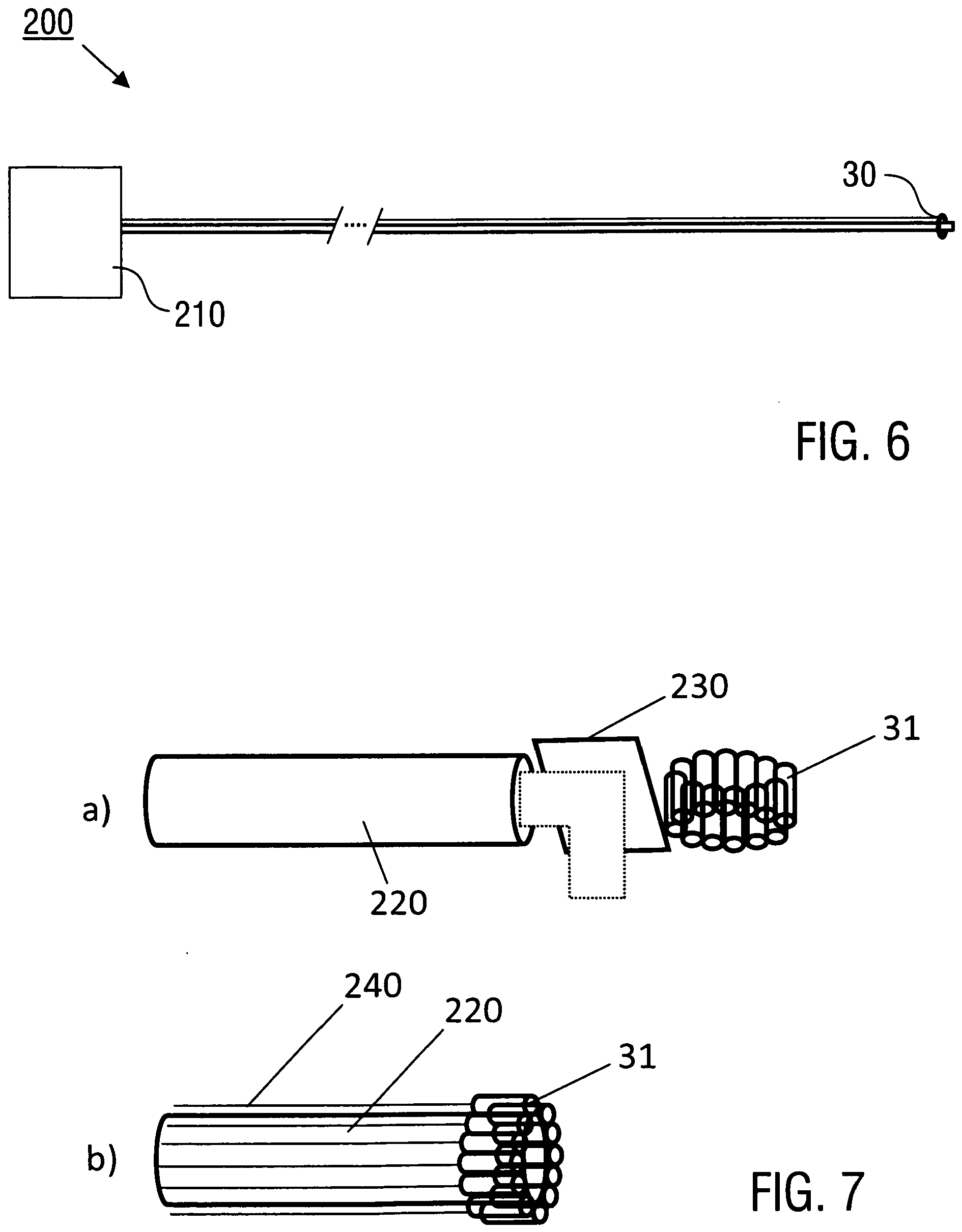