[0001] This invention relates to a motorcycle according to the introductory part of the main claim.
[0002] As is known, a motorcycle comprises a frame mounted on wheels connected to said frame by means of front and rear forks, with two arms or a single arm. Shock-absorbing devices, capable of enabling the absorption of stresses that are generated along the median plane of the motorcycle, are associated with said forks.
[0003] During use, however, when the motorcycle negotiates a bend, it leans over to one side, at a very marked angle when the motorcycle is used in a competition. In this condition, the forks and shock-absorber devices associated with them are incapable of efficiently absorbing the stresses directed in lateral directions in relation to them, or rather, in relation to the median plane of the vehicle. These stresses, generated by the imperfections of the road surface, can contribute to the emergence of vibrations or "chattering" on the vehicle (particularly on its front part), which make it difficult to steer, especially at high speed.
[0004] In order to enable the absorption of the above-mentioned lateral stresses, various solutions are known that envisage shock-absorbing devices associated with at least the front wheel of the vehicle. These devices are very diverse but in general comprise an elastic or elastically deformable body connected to the hub of the wheel or to a part of the vehicle's steering assembly.
[0005] Known solutions do not enable a rapid adjustment of the shock-absorbing response of the above-mentioned device and are costly to produce and/or fit.
[0006] GB581845 describes a cycle or similar vehicle having a frame with a median plane, front and rear wheels, each of which comprises a hub having a longitudinal spindle on which is mounted a rim carrying a tyre. This hub is supported by a fork. Positioned between the hub and the rim is an elastically deformable cylindrical tubular device whose opposing ends form flanges interposed between said rim and protruding collars of the hub.
[0007] This known solution does not, however, enable adjustment of the shock-absorbing response of the shock-absorbing device defined by the cylindrical tubular device because, among other things, it is compressed between the rim and the single end collars as these form part of portions of the hub screwed tightly together.
[0008] The aim of the present invention is to offer a motorcycle provided with a shock-absorbing device capable of absorbing transverse stresses, or in any event stresses not arranged along the plane of the vehicle, that is an improvement on known solutions.
[0009] In particular, the aim of the invention is to offer a motorcycle in which said shock-absorbing device is simple to make and fit onto the vehicle in order to reduce the time taken for its possible replacement, which could be advantageous when this operation is performed on a competition motorcycle.
[0010] Another aim is to offer a motorcycle of the type described that allows the response of the shock-absorbing device to be easily and quickly calibrated.
[0011] These and other aims, which will become clear to a person skilled in the art, will be achieved by a motorcycle according to the accompanying claims.
[0012] A better understanding of this invention will emerge from the following drawings, given purely by way of a nonlimiting example, in which:

Figure 1 is a perspective view of a motorcycle wheel, without the tyre, but such as to embody the present invention;

Figure 2 is a front view of the wheel in Figure 1 with some parts omitted for greater clarity;

Figure 3 is a cross-sectional view of the wheel in Figure 1 along Line 3-3 of Figure 2;

Figure 4 is a view of a detail of a cross-section along Line 4-4 of Figure 3;

Figure 5 is a view of a detail of a cross-section along Line 5-5 of Figure 3.

2. Motorcycle according to claim 1, characterised in that it comprises three pairs of elastically deformable elements arranged angularly equidistant from each other about the longitudinal spindle (K) of the hub (2).

3. Motorcycle according to claim 1, characterised in that the elastically deformable elements (13, 14) have the same mechanical and/or dimensional characteristics.

4. Motorcycle according to claim 1, characterised in that the elastically deformable elements (13, 14) have a shape chosen between an annular or cylindrical shape.

5. Motorcycle according to claim 1, characterised in that the collar (7) at the first end (6) of the hub (2) forms one piece with the latter.

6. Motorcycle according to claim 1, characterised in that the collar (7) at the first end (6) of the hub (2) is part of a component different from the hub (2), but fixed thereto.

7. Motorcycle according to claim 1, characterised in that each elastically deformable element (13, 14) is alternatively obtained from rubber, metal or polymer material, material with a honeycomb structure, anisotropic shock-absorbing material or suchlike. 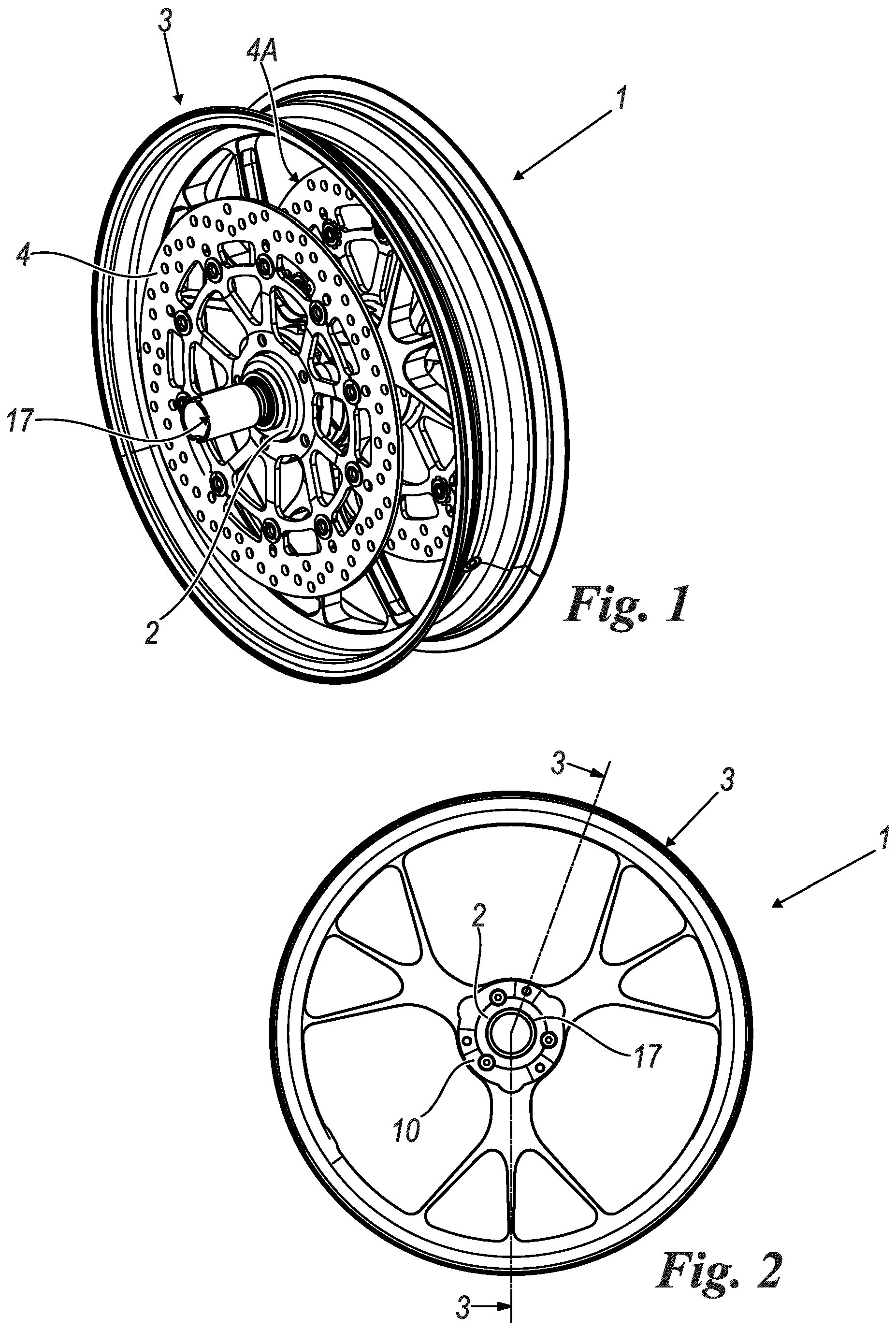 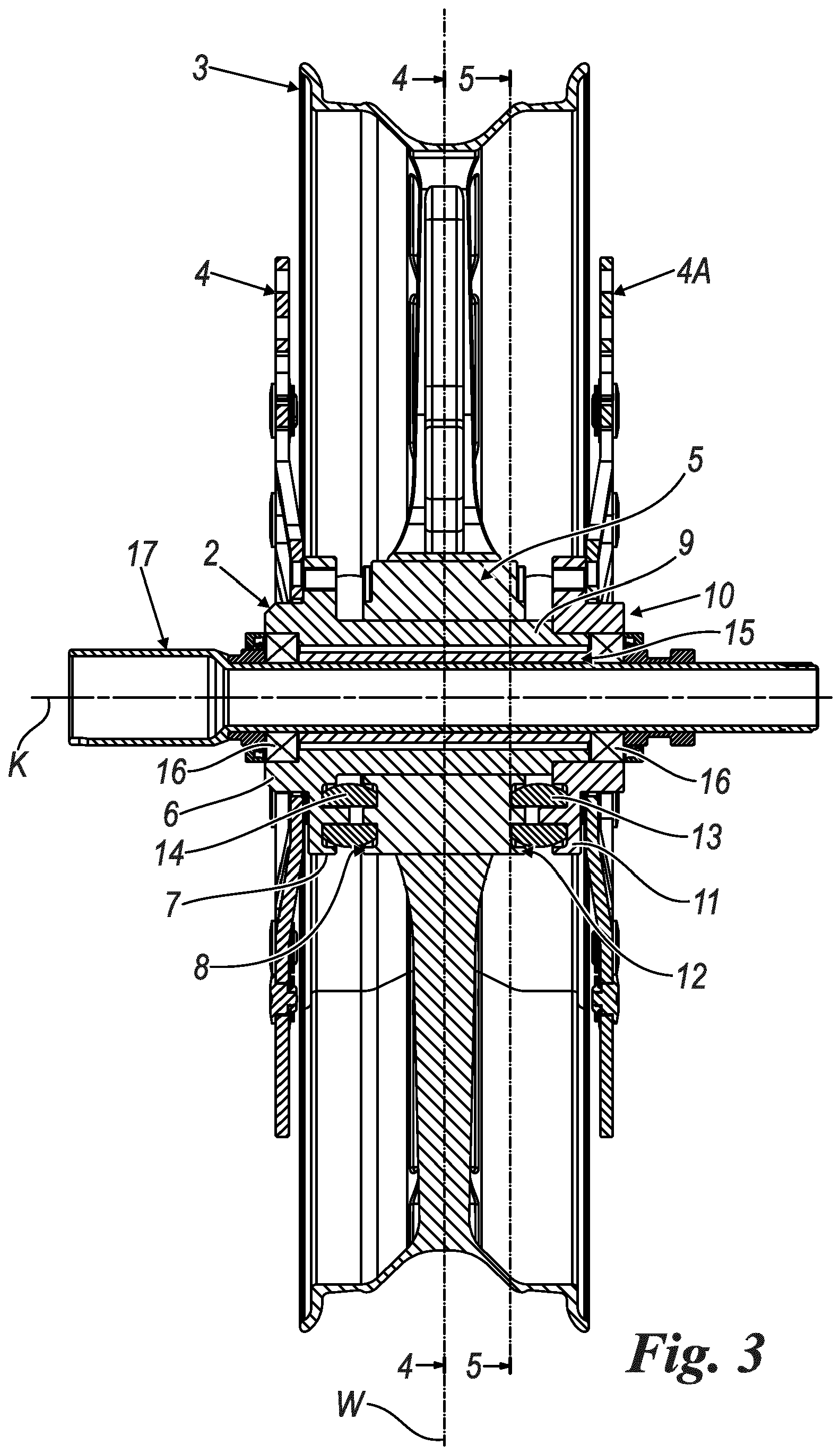 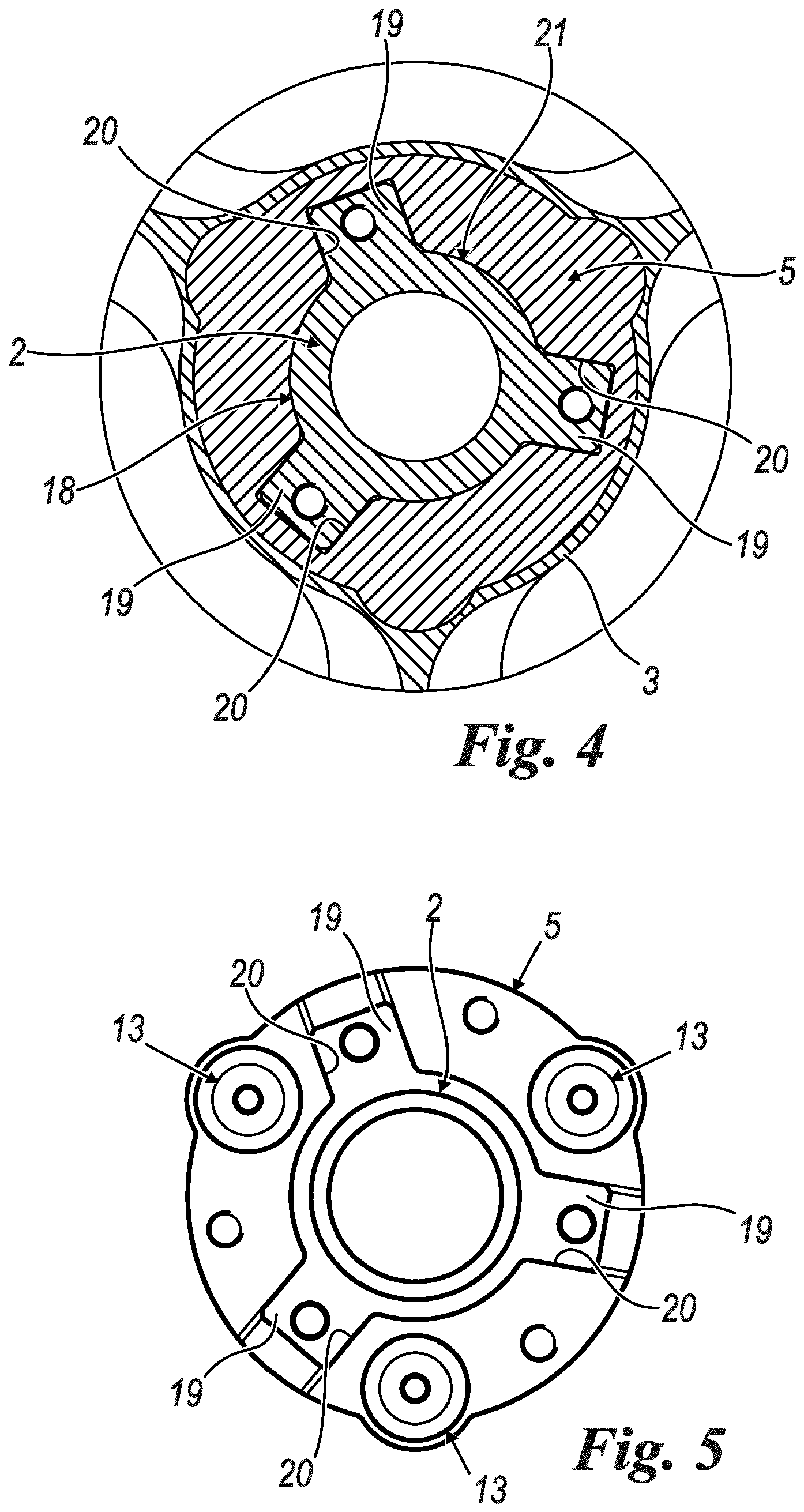