[0001] This invention relates to medical diagnostic ultrasound systems and, in particular, to ultrasonic diagnostic imaging systems which enable the visualization and guidance of the insertion of multiple biopsy needles in real time.
[0002] Ultrasonic imaging has long been used to image the insertion path of biopsy needles and other invasive devices so that the clinician can visually observe the insertion of the needle toward and to target anatomy which is to be biopsied.
Conventionally this is done with two dimensional (2D) ultrasound imaging and a 2D imaging probe equipped with a needle guide. One such needle guide is illustrated in US Pat. 6,203,499 (Imling et al.) The purpose of the needle guide is to keep the needle in alignment with the plane of the 2D image of the ultrasound probe so that the insertion of the needle continuously takes place within that plane where it is continually imaged by the ultrasound probe. The needle guide clips onto the probe so that the hole or slot in the guide through which the needle is inserted is in fixed alignment with the image plane of the probe. This limits needle insertion to two positions, one end of the probe or the other. The clinician manipulates the probe until the target anatomy is in view in the image plane. The clinician then inserts the needle through the guide and at an inclination which will cause the tip of the needle to be inserted toward and access the target anatomy. A sample of the target anatomy can then be extracted through the lumen of the needle. US2002/0123689 discloses an ultrasonic probe with a needle guide for up to 3 needles.
[0003] A difficulty commonly encountered in needle biopsies is keeping the insertion path of the needle constantly in alignment with the image plane of the probe. There are two sources of this difficulty. One is that the probe must be held stationary with one hand to keep the image plane in a fixed position while the needle is manipulated and inserted with the other hand. The other is that the needle can bend and deflect as it is inserted and encounters tissues of different density and stiffness as it penetrates the tissue of the body. This can cause the needle to vary from a single plane as it is inserted. Hence it would be desirable to have a wider field of of view of the target anatomy and the needle insertion path such as one afforded by three dimensional (3D) ultrasound imaging. It would further be desirable to enable the needle to be inserted from a variety of positions and not just from the ends of the probe.
[0004] Three dimensional ultrasound imaging will afford a wider field of view of the needle insertion. However, many clinicians do not like the clutter and often ambiguous perception of depth in a 3D ultrasonic imaging. They prefer a clear and easy to understand two dimensional image. One way to accommodate this desire is to use 3D imaging with multi-planar reconstruction (MPR). With MPR the 3D probe will scan the three dimensional volume in front of the probe which includes the target anatomy, then one plane in the volume is chosen to be constructed as a 2D image. This enables the clinician to hold the 3D probe stationary and adjust the MPR plane location to accommodate a changing needle insertion plane. Unfortunately, this is in practice a three-handed procedure: one hand to hold the probe, one to insert the needle, and a third to adjust the location of the MPR plane. WO2011/114259 discloses the automatic positioning of imaging planes in ultrasonic imaging. It would be desirable to improve this procedure so that the needle will be continually imaged in a 3D volume with one hand holding the probe and the other inserting the needle.
[0005] In accordance with the principles of the present invention, a diagnostic ultrasound system has a 3D imaging probe with a needle guide that automatically aligns the plane of a displayed ultrasound image with the plane of needle insertion. A needle guide attached to the imaging probe produces a signal identifying the location of the plane of needle insertion in a volumetric region which can be scanned by the probe. The ultrasound system produces an image of the identified plane, preferably by biplane imaging by which only the identified plane or planes are scanned. In one embodiment the insertion planes of multiple needles can be identified, facilitating use of an ultrasound system of the present invention for procedures such as r.f ablation using multiple needles. In another embodiment the insertion planes of differently inclined needles can be identified and visualized.
[0006] In the drawings:

FIGURE 1 illustrates a 3D ultrasound probe being held by the probe handle with a needle guide of the present invention attached to the distal end of the probe.

FIGURE 2 is a view of the face of the 3D probe of FIGURE 1 with the needle guide attached to and surrounding the distal end of the probe.

FIGURE 4 shows the needle guide attached to the end of the probe with a surrounding needle position encoder and a wireless communicator.

FIGURE 5a illustrates a needle guide of the present invention which employs an optical needle position encoder.

FIGURE 5b illustrates a needle guide of the present invention which employs a resistive needle position encoder.

FIGURE 6 illustrates the relationship between the plane of needle insertion and the location of the biplane in which the insertion plane is located in relation to the volumetric region which can be scanned by a 3D imaging probe.

FIGURE 7 illustrates in block diagram form an ultrasound system with a needle guide constructed in accordance with the principles of the present invention.

FIGURES 8 an 9 illustrate a needle guide of the present invention with multiple angles of inclination for needle insertion.

FIGURE 10 illustrates an ultrasound display of multiple needles being used for a microwave ablation procedure.

1. An ultrasonic imaging system which visually guides insertion of a plurality of invasive devices such as a biopsy or ablation needle comprising:

a 3D ultrasonic imaging probe (12) which is capable of imaging different planes of a volumetric region;

an ultrasound system (10) coupled to the probe and configured to control the 3D ultrasonic imaging probe to simultaneously produce a plurality of 2D images, planes of which being aligned with the plurality of different insertion planes. 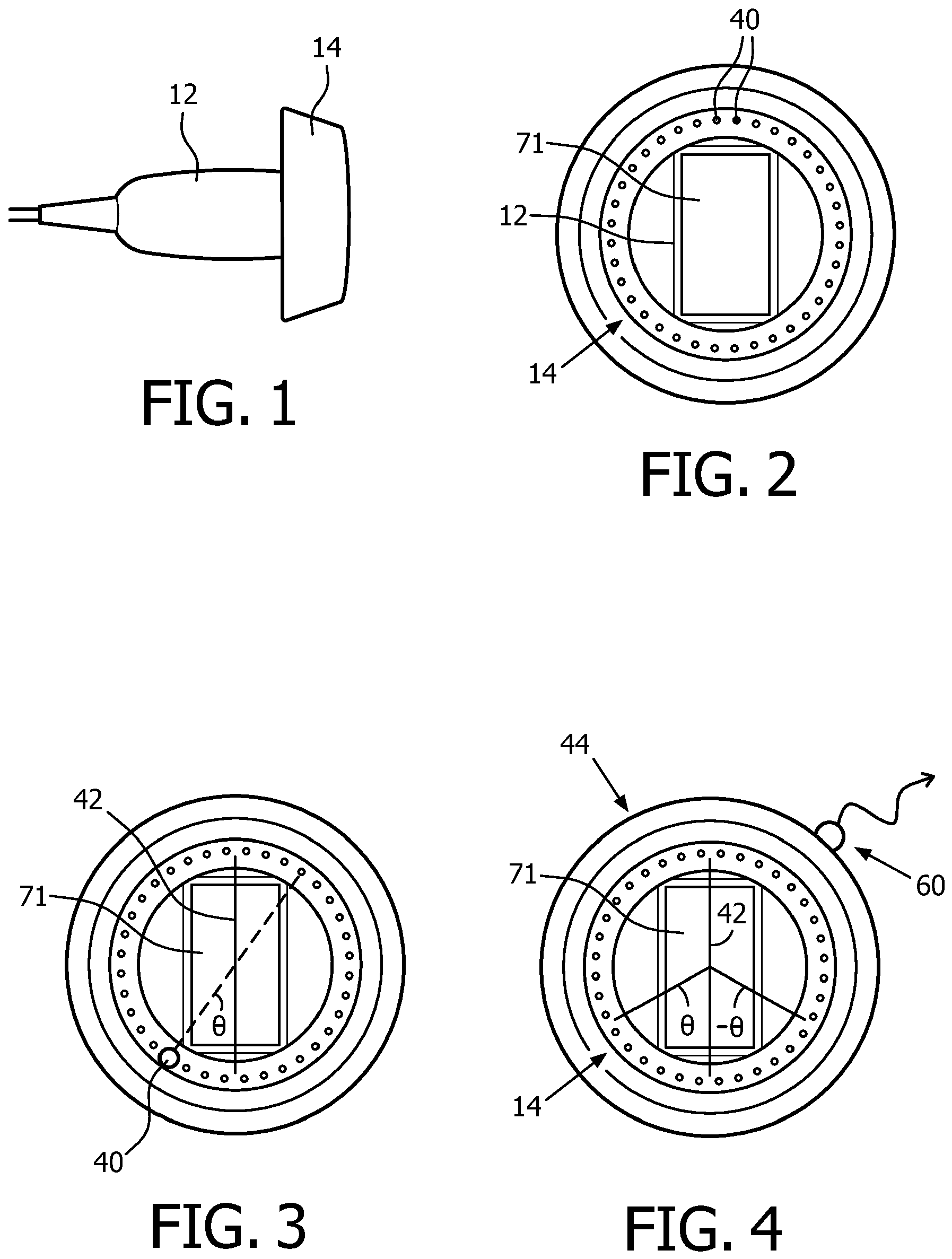 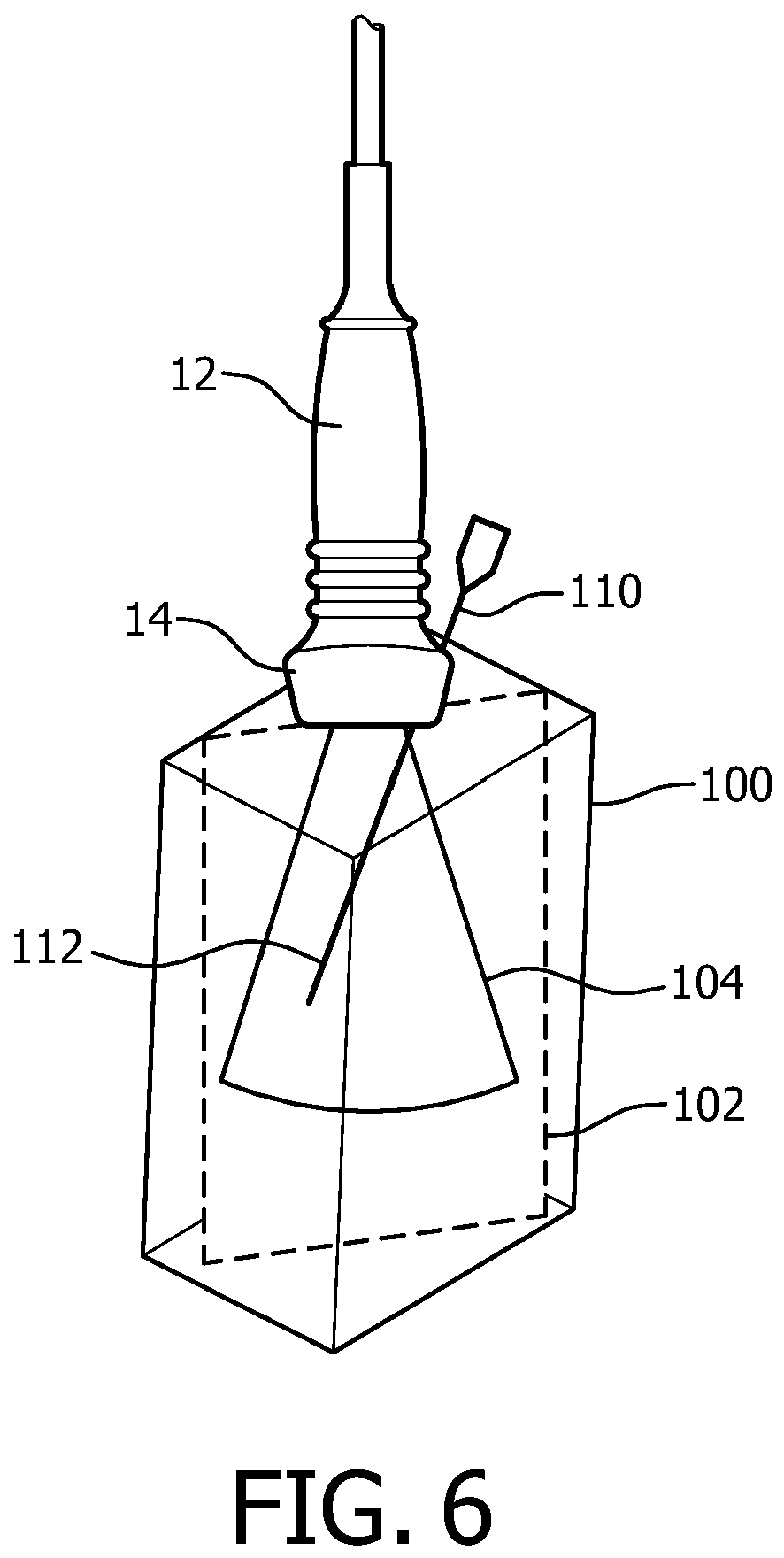 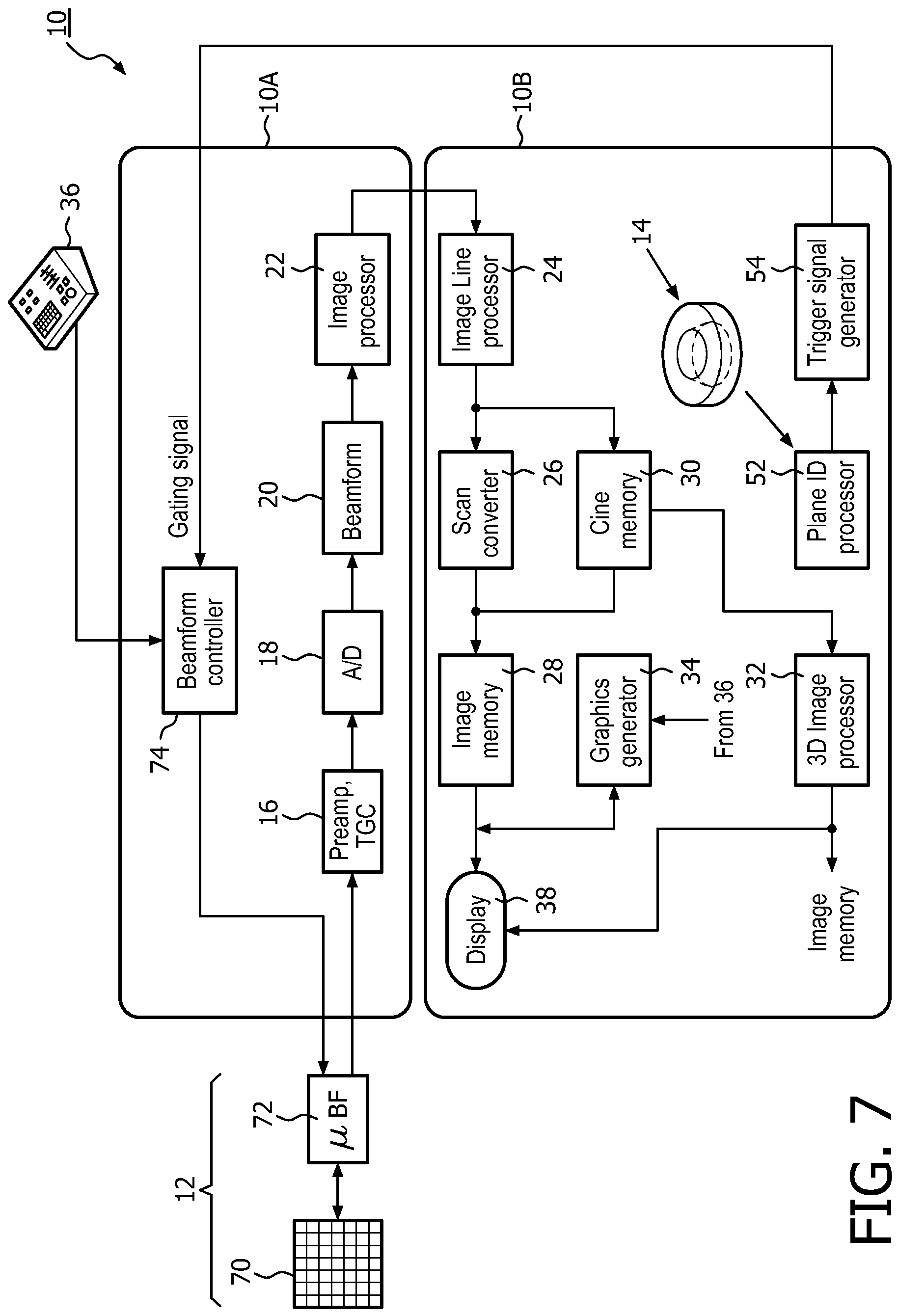 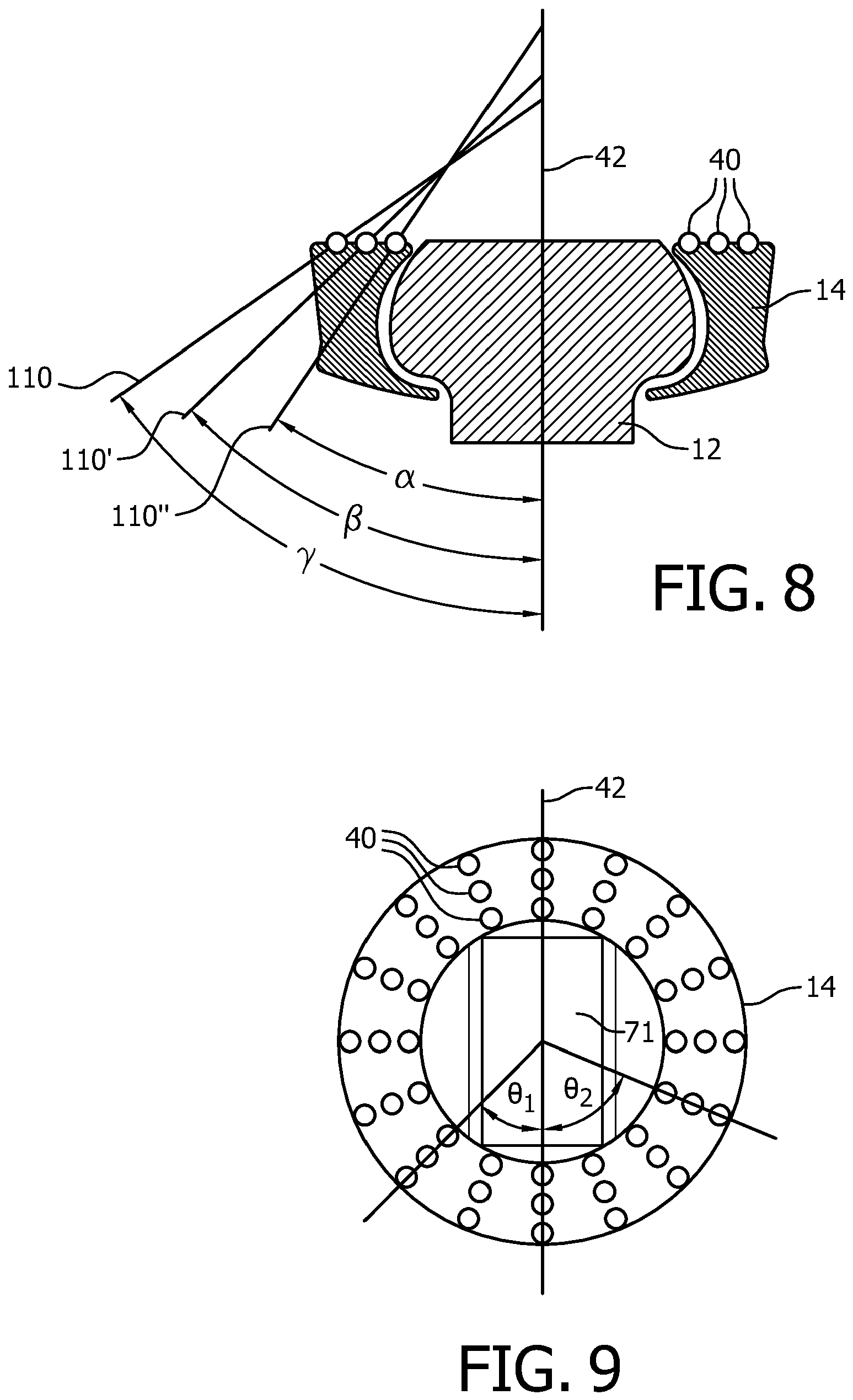 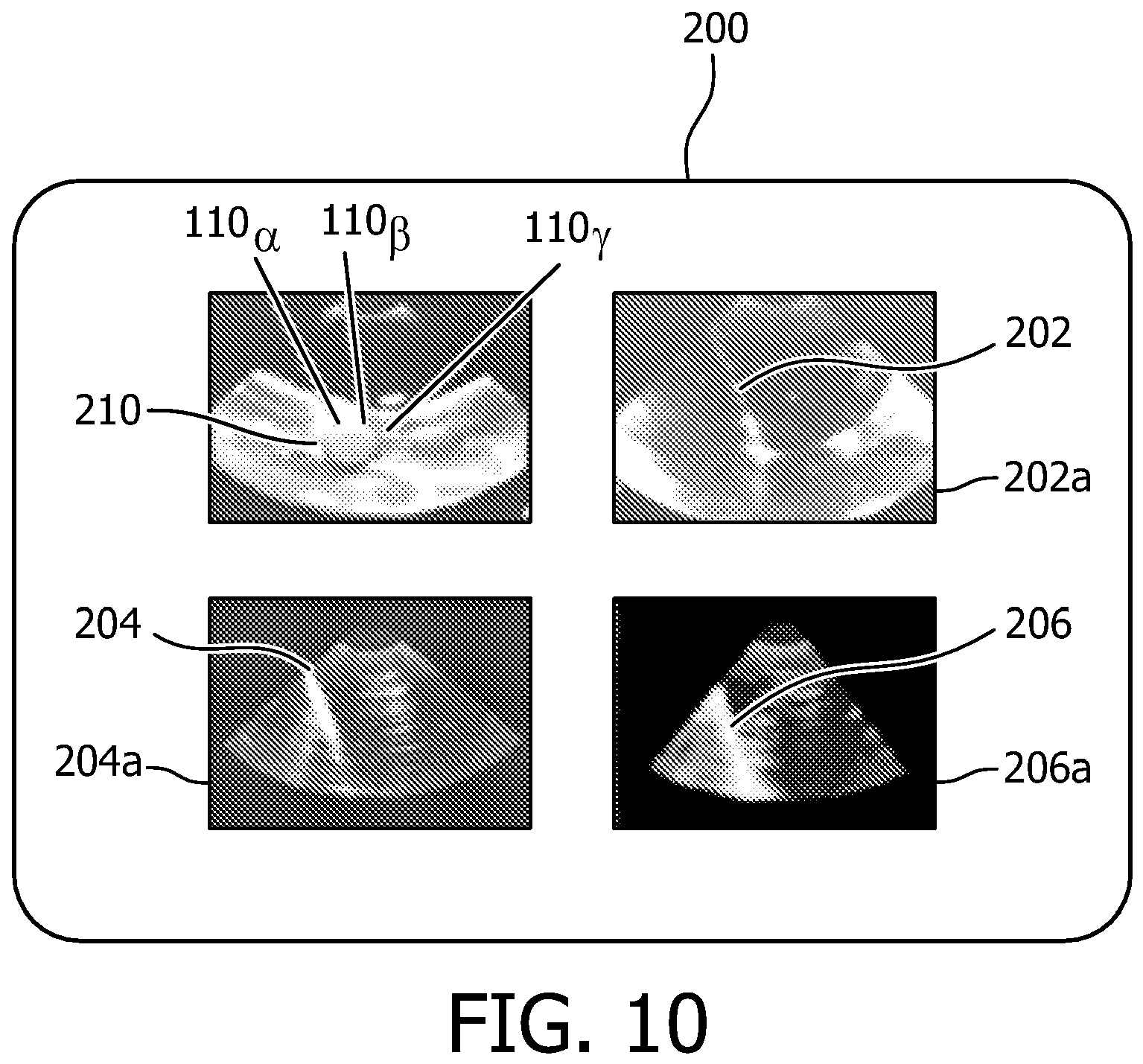