[0001] Computer animation is typically a very time consuming activity requiring computer graphics (CG) expertise and use of specialist software tools and considerable computing power. First a model of an object will be generated in the form of a 3D mesh. A CG animator will then generate and embed a skeleton inside the 3D mesh of the object being animated and paint individual bone weights onto each vertex. At runtime, motion capture data or an inverse kinematics engine drives the bones of the character, which then transforms the mesh. Depending upon the level of experience of the user and the complexity of the object being animated, this process may take hours or days.
[0002] The embodiments described below are not limited to implementations which solve any or all of the disadvantages of known methods of computer animation.
[0003] "Embedded Deformation for Shape Manipulation", Sumner, Schmid and Pauly, ACM Transactions on Graphics (TOG) - Proceedings of ACM SIGGRAPH 2007, vol.26, no.3, 80, 3 July 2007, pages 1-7, describes an algorithm that generates deformations via direct manipulation.
[0004] "Animating Non-Humanoid Characters with Human Motion Data", Yamane et al., Symposium on Computer Animation, 2010, pages 169-178, describes a method for generating animations of non-humanoid characters from human motion capture data.

[0005] There is provided a method of animating an object according to claim 1 and a system according to claim 9. The following presents a simplified summary of the disclosure in order to provide a basic understanding to the reader. This summary is not an extensive overview of the disclosure and it does not identify key/critical elements or delineate the scope of the specification. Its sole purpose is to present a selection of concepts disclosed herein in a simplified form as a prelude to the more detailed description that is presented later.
[0006] Methods of animating objects using the human body are described. In an embodiment, a deformation graph is generated from a mesh which describes the object. Tracked skeleton data is received which is generated from sensor data and the tracked skeleton is then embedded in the graph. Subsequent motion which is captured by the sensor result in motion of the tracked skeleton and this motion is used to define transformations on the deformation graph. The transformations are then applied to the mesh to generate an animation of the object which corresponds to the captured motion. In various examples, the mesh is generated by scanning an object and the deformation graph is generated using orientation-aware sampling such that nodes can be placed close together within the deformation graph where there are sharp corners or other features with high curvature in the object.
[0007] Many of the attendant features will be more readily appreciated as the same becomes better understood by reference to the following detailed description considered in connection with the accompanying drawings.

[0008] The present description will be better understood from the following detailed description read in light of the accompanying drawings, wherein:

FIG. 1 shows a flow diagram of an example method of animating an object and a sequence of images which illustrate the method in action;

FIG. 2 shows an alternative representation of the flow diagram shown in FIG. 1;

FIG. 3 illustrates an exemplary computing-based device in which embodiments of the methods described herein may be implemented;

FIG. 5 is a flow diagram of an example method of generating a deformation graph;

FIG. 6 is a schematic diagram of a graphical user interface showing proposed links between an object and a tracked skeleton;

FIG. 7 shows a flow diagram of an example method of attaching the skeleton to the deformation graph;

FIG. 8 is a schematic diagram showing an example transformation applied to a series of nodes;

FIG. 9 shows a flow diagram of a further example method of animating an object; and

FIG. 10 shows a schematic diagram of multiple skeletons attached to a single object.

The Mahalanobis distance distq(p) transforms the spherical isosurfaces around q defined by the Euclidean distance into ellipsoids with the nq axis squashed by a factor of 1/3. It increases the distance of points that deviate from the plane tangent to q. The distance D(p,q) has the property that distances increase faster when their normals deviate from alignment. When used for Poisson Disk pattern generation, it allows differently oriented samples to be placed arbitrarily close together.
[0040] A Poisson Disk pattern is generated (in block 502) as the node positions of the deformation graph using the distance metric defined in equation (1) above. Since a fixed framerate is generally used, a fixed number of samples N may be used and the minimum separation radius, R, may be defined as

[0058] The deformation defined by multiple nodes is combined linearly as in linear blend skinning (LBS). Given a point

the deformation graph maps it to:

The blending weights wj(v) are nonzero only for the k nodes closest to v, fall off linearly with distance, and sum to one. If transformations defined by the nodes vary smoothly, and the nodes are of sufficient density, then the vertices also deform smoothly. Using this technique, features rotate during deformation rather than stretch or shear, as shown in FIG. 8. FIG. 8 is a schematic diagram showing 12 nodes 802 (numbered 0-11) and the space surrounding each node is shown as a square 804. Initially, the nodes are shown in a straight line 806 but if the solid nodes (nodes 0, 6 and 11) are attached to the skeleton and node 6 is moved down, it can be seen that the other unattached nodes (nodes 1-5 and 7-10) move smoothly and the surrounding space is deformed naturally, rotating without stretching. The transformation shown bends the nodes like an arm at an elbow. In 3D, the ellipse 808 would be the surface of the target object and the solid nodes (nodes 0, 6, 11) would correspond to a tracked skeleton.
[0059] To constrain the space of transformations, a number of assumptions are made and formulated as an energy minimization problem. The energy is defined as a weighted sum of four terms: a first term, Erot, which minimizes stretching by biasing the solution towards isometry, a second term, Ereg, which is a regularization term that ensures that each node maps its neighbors near where they would map themselves, a third term, Econ, which incorporates the point constraints which are used to attach the deformation graph and the skeleton (as described above) and a fourth term, Erig, which is referred to as the 'rigidity regularizer'. The energy is therefore given by:

Each of these terms, which are all quadratic terms, and their associated weights are described in more detail below. The energy minimization may be performed using the Gauss-Newton algorithm or any other suitable technique.
[0060] The first term, Erot, which minimizes stretching may be defined as:

where I is the identity matrix and ∥·∥F denotes the Frobenius norm. The associated weight, wrot, may be set equal to one.
[0061] The second term, Ereg, is a regularization term ensures that each node maps its neighbors near where they would map themselves and hence ensures that the deformation field is smooth. This term may be defined as:

where N(j) is the set of neighbors of j in the graph. The associated weight, wreg, may be set equal to 10.
[0062] The third term, Econ, incorporates an arbitrary number of point constraints which are defined when the tracked skeleton is attached to the deformation graph (as described above). Each constraint maps a given point pl to a desired target ql and the term may be defined as:

where φ(pl) is the result of applying the deformation to pl (as set out in equation 2 above). The associated weight, wcon, may be set equal to 100.
[0063] The fourth term, Erig, is the rigidity regularizer which may be included to ensure a stable deformation. The second term, Ereg, as described above is a regularization term, while the fourth term, Erig, enforces a stronger regularization condition on a subset of the edges in the deformation graph. Without this fourth term, the energy function contains a number of gauge freedoms due to symmetry: a subgraph without user constraints, weakly connected to the rest of the graph through a single cut vertex (a vertex whose removal increases the number of connected components), is free to rotate about that point. These cut vertices include the ones where additional edges were added when the deformation graph was created (e.g. in block 565 of FIG. 5), as described above. Therefore, at these edges (i.e. at all cut vertices in the deformation graph) a stronger regularization condition is enforced and this may be defined as:

1. A method of animating an object comprising:

generating, by a processor, a deformation graph automatically from an input mesh defining the object (112), the generating comprising:

defining a plurality of node positions from the input mesh using sampling (502);

the sampling and the creating of the nearest neighbor graph both using a 5D orientation-aware distance D(p,q) which is defined as:

where p and q are samples with normals np and nq, ;

receiving body tracking data defining positions of one or more points on a body (114);

mapping points on a skeleton to points on the deformation graph using the body tracking data (116) to generate a tracked skeleton;

dynamically applying the plurality of transformations to the input mesh to render a corresponding animation of the object (120).

2. A method according to claim 1, further comprising creating the input mesh by:

generating a 3D volumetric reconstruction of a scene scanned by a user with a depth camera (401);

segmenting an object from the 3D volumetric reconstruction of the scene (402); and

extracting a geometric isosurface from the segmented portion of the 3D volumetric reconstruction (403).

3. A method according to any of the preceding claims, wherein the deformation graph is generated automatically from the input mesh using orientation-aware sampling (502).

5. A method according to claim 4, wherein skeleton is an animal skeleton.

identifying any connected components in the nearest neighbor graph (562);

computing a minimum spanning tree on the weighted graph (564); and

adding an additional edge to the nearest neighbor graph where there is an edge between the connected components in the spanning tree (565).

7. A method according to any of claims 4-6, wherein transforming the deformation graph in real-time by computing a plurality of transformations on the deformation graph based on motion of the tracked skeleton comprises treating the additional edges as links with greater rigidity than other connections between nodes in the nearest neighbor graph.

8. A method according to any of the preceding claims, wherein mapping points on a skeleton to points on the deformation graph comprises:

providing visual feedback to a user showing alignment of the tracked body and the input mesh (600);

dynamically generating a proposed mapping between points on a skeleton and a number of nearest nodes in the input mesh: and

in response to a verbal command received from the user (708), storing the proposed mapping (710),

and wherein the stored mapping is used in dynamically applying the plurality of transformations to the mesh.

an input for receiving an input mesh defining an object;

a pre-processing module (308) arranged to generate a deformation graph automatically from the input mesh; and

where p and q are samples with normals np and nq,.

10. A system according to claim 9, further comprising:
a skeleton tracker module (312) arranged receive data from a sensor (314) and to generate the body tracking data from the received data. 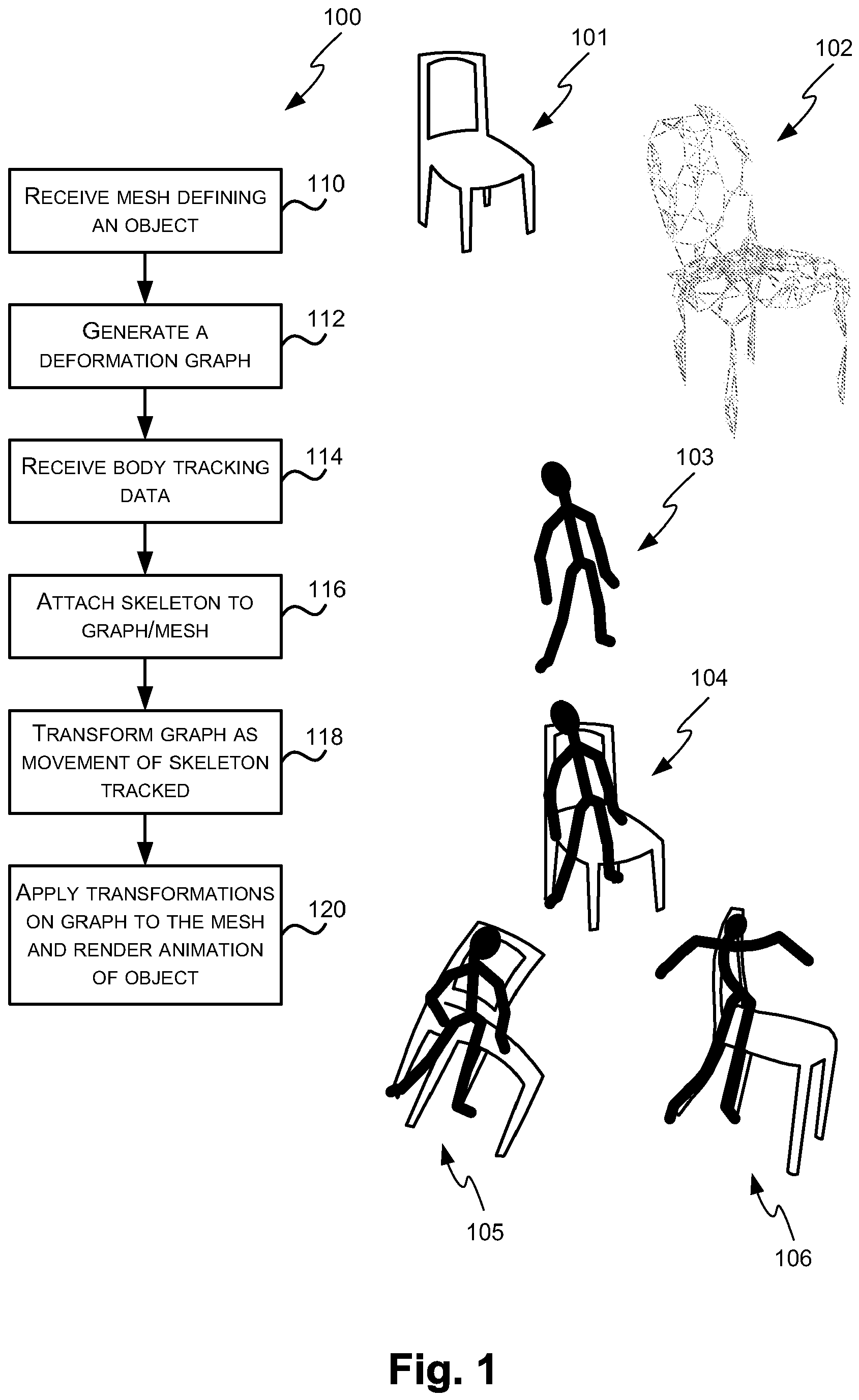 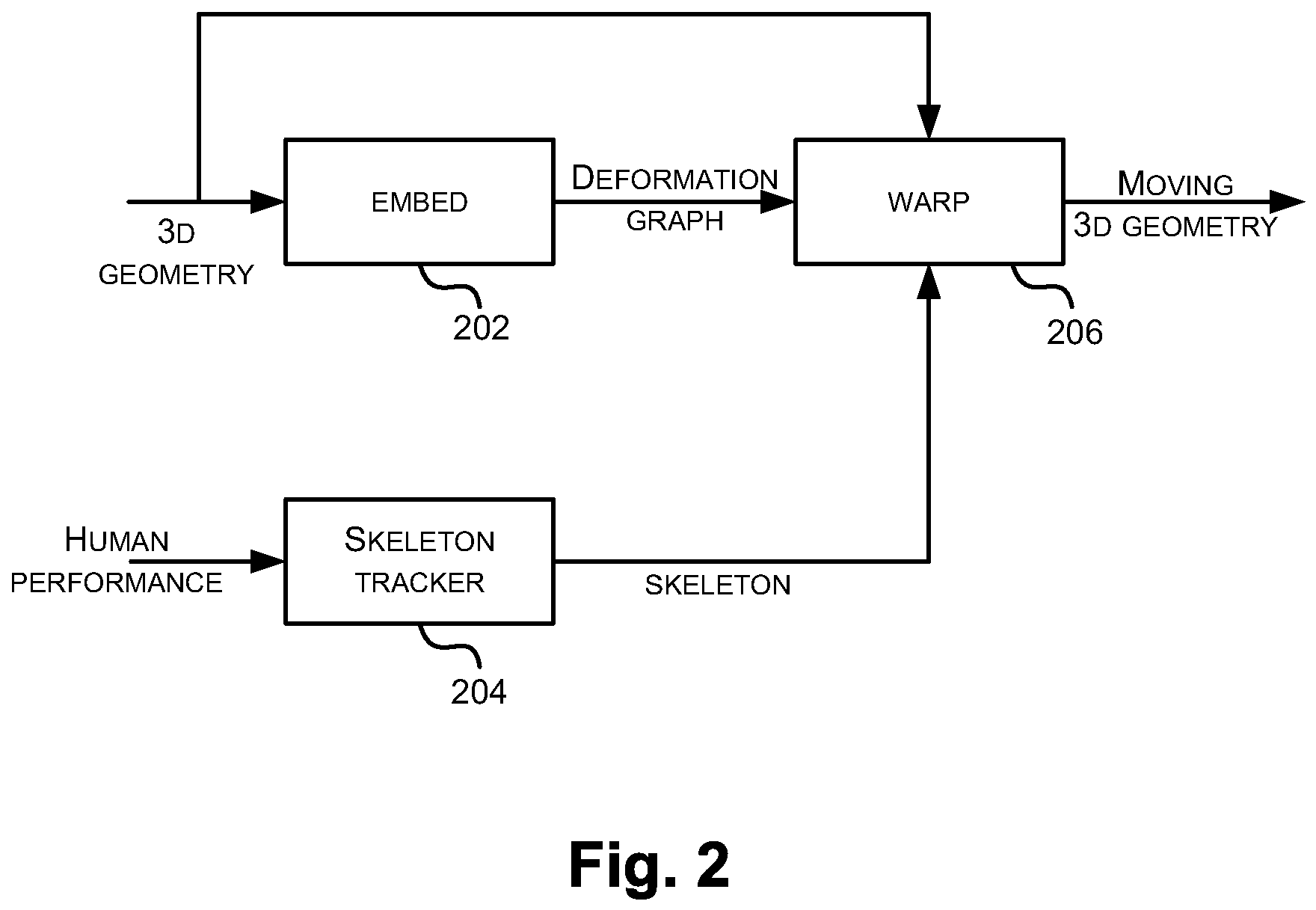 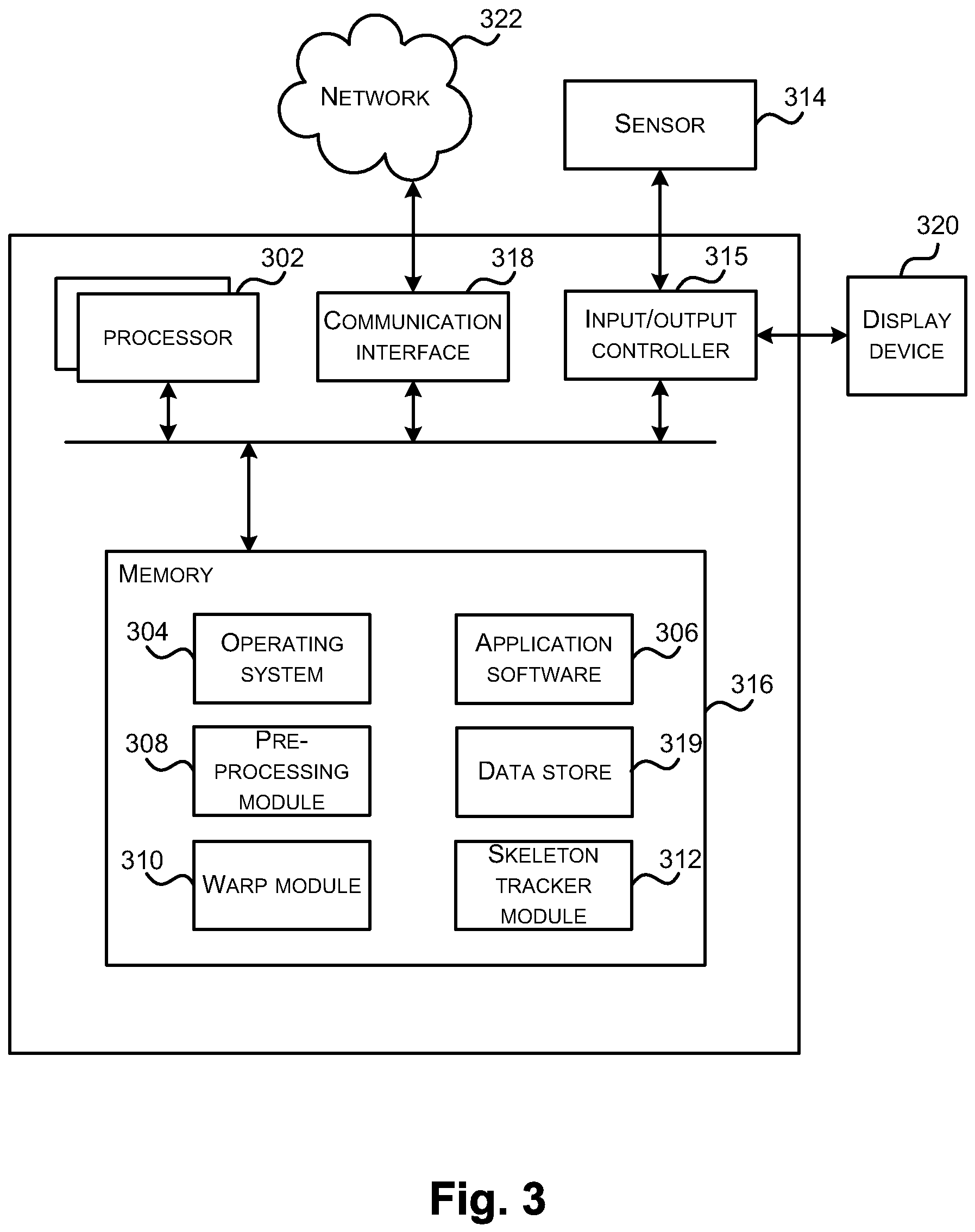 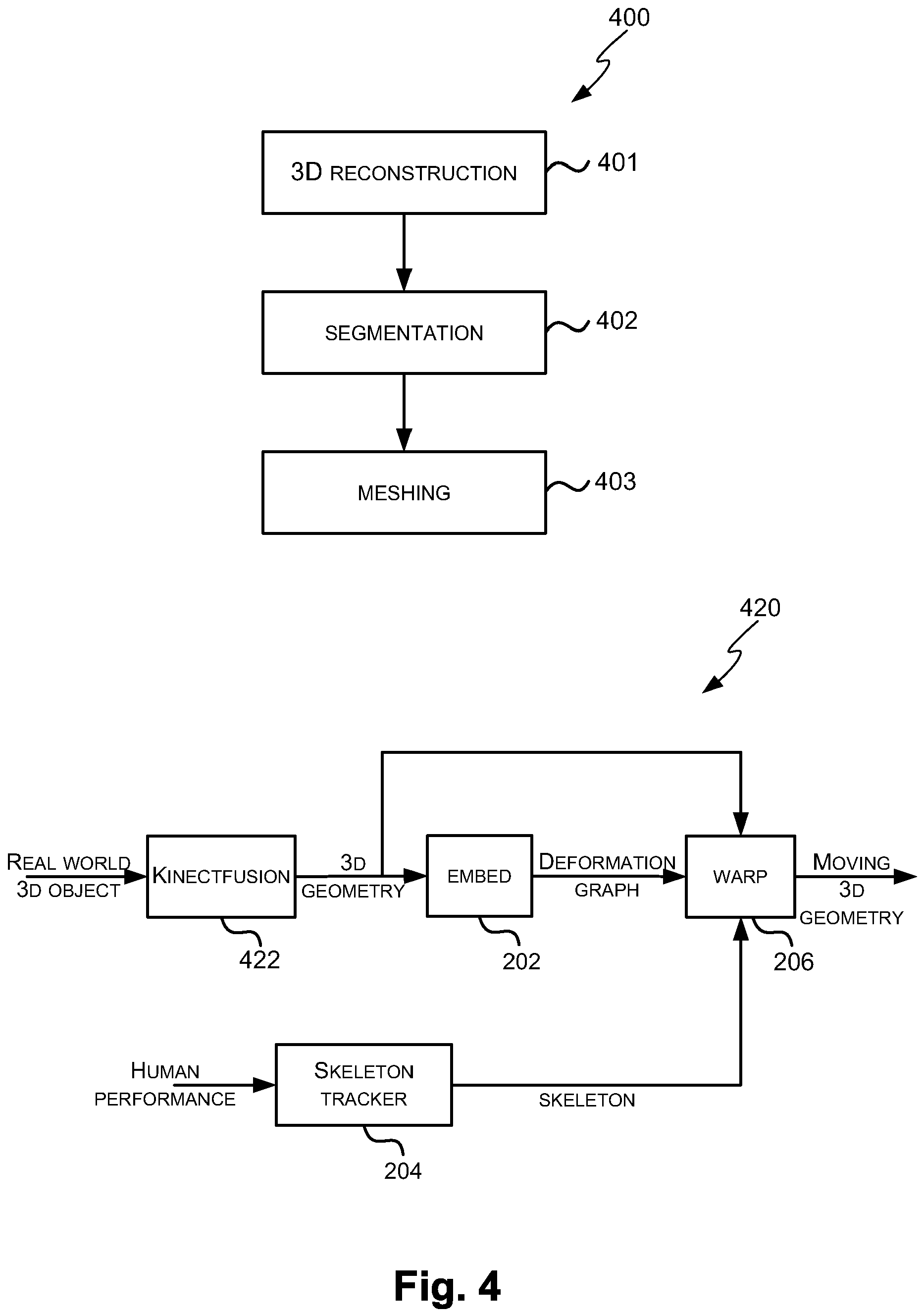 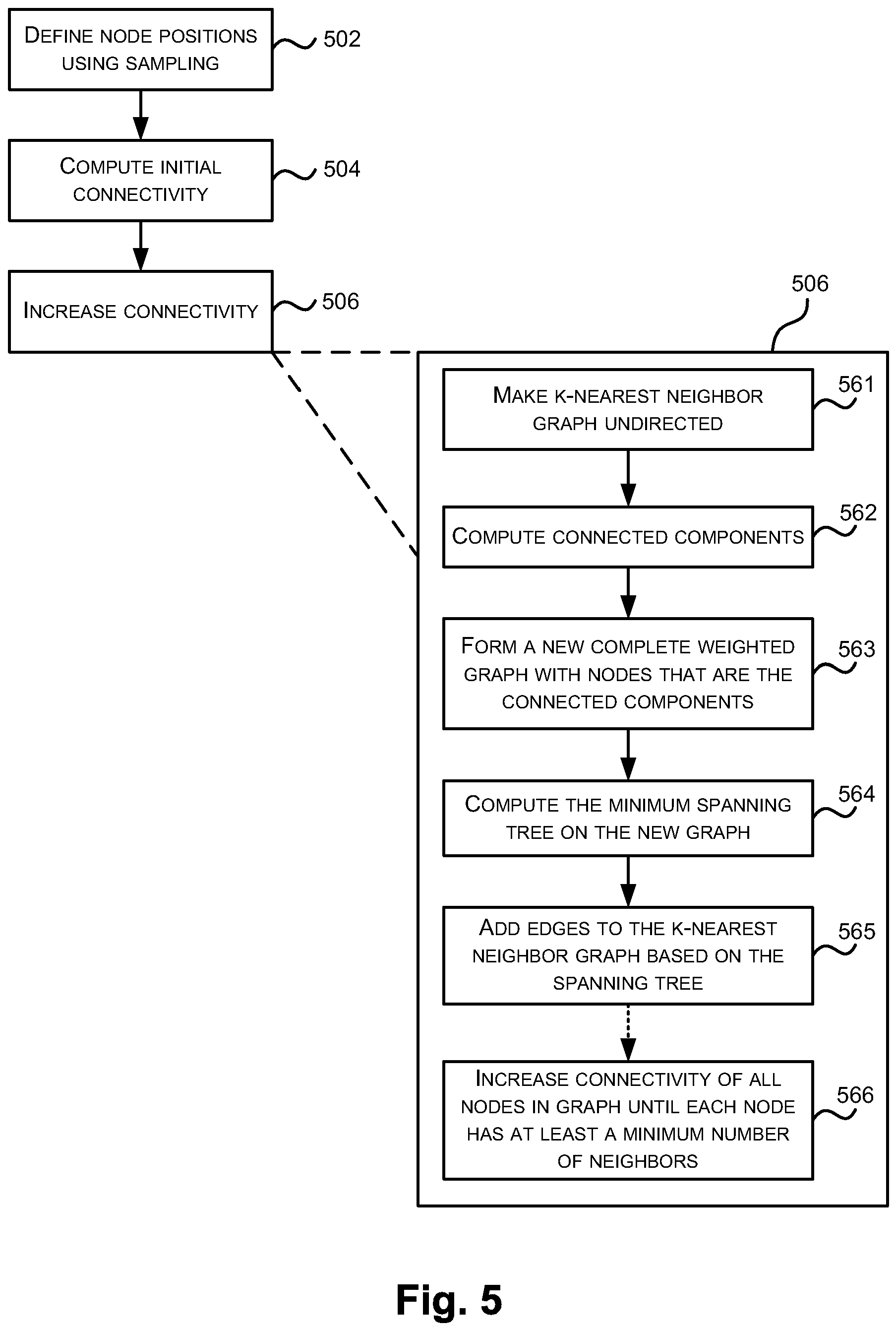 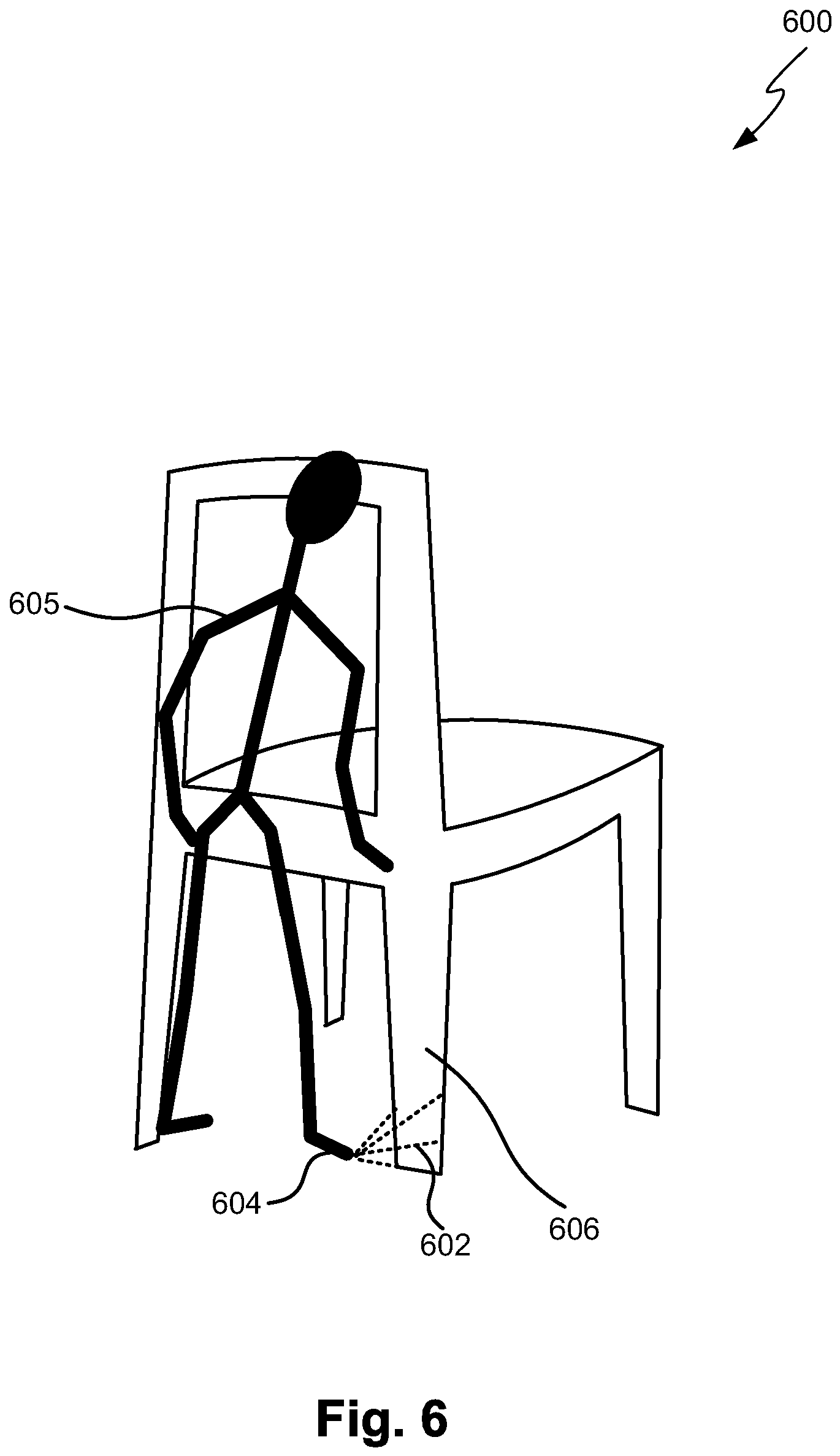 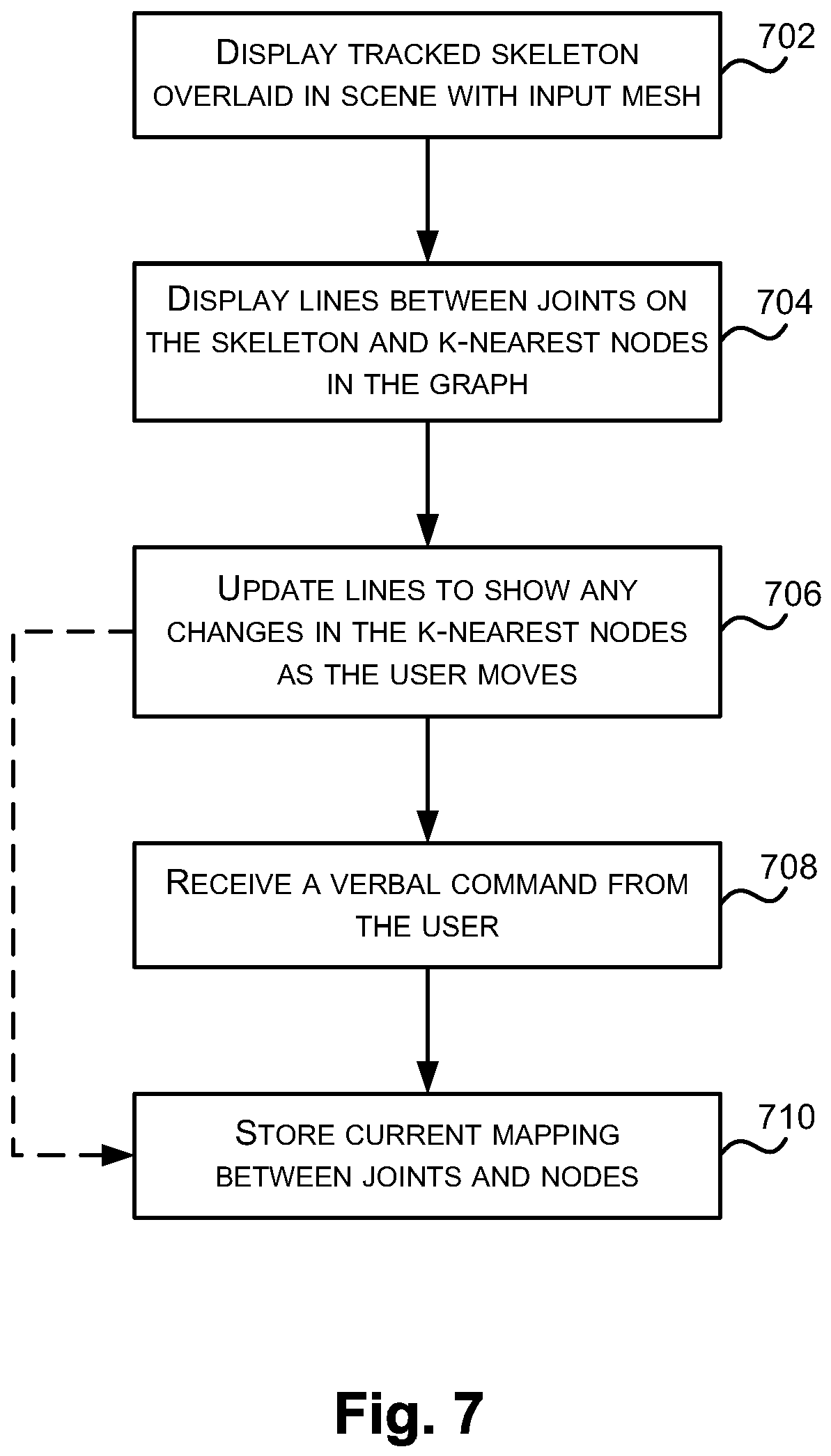 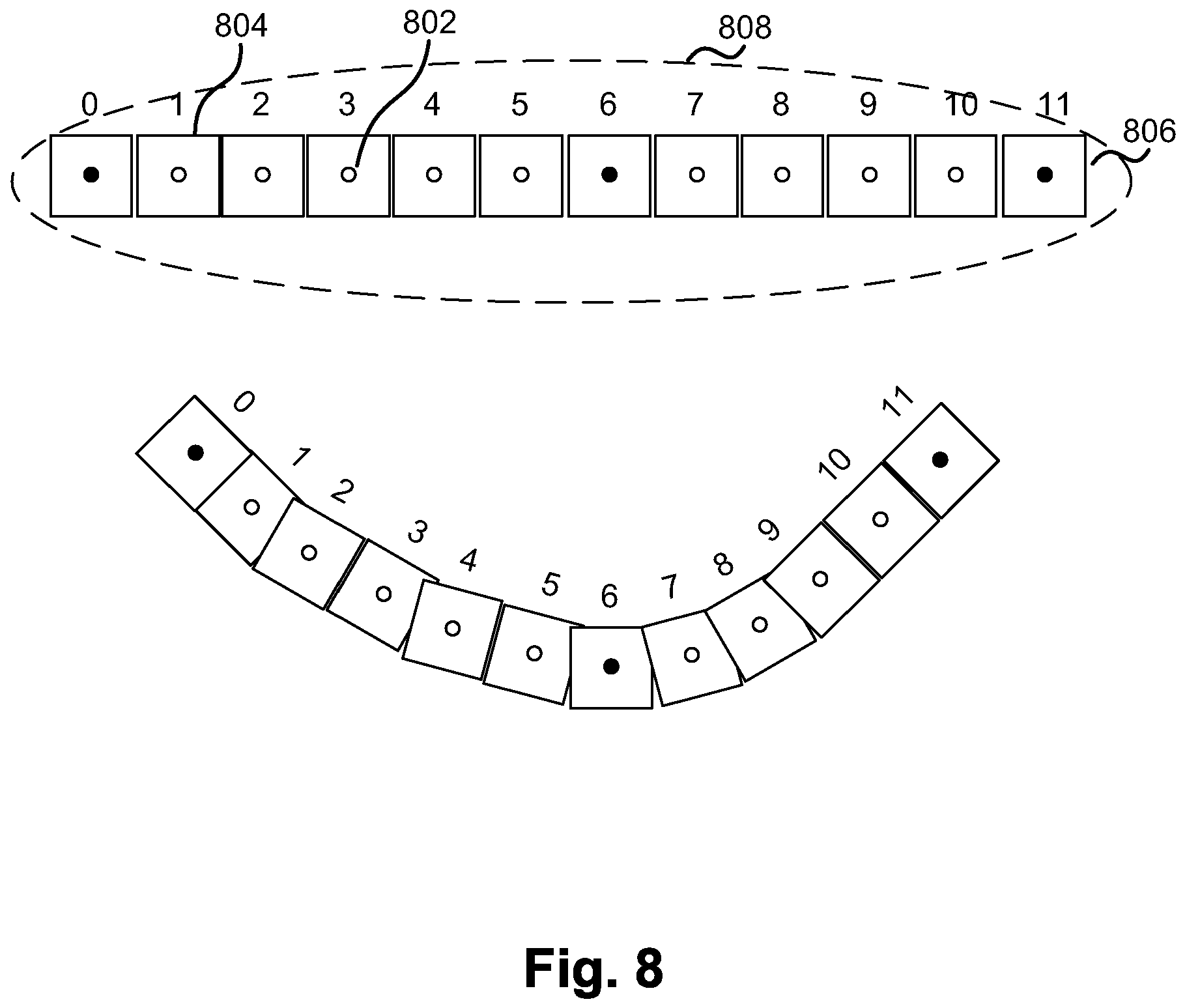 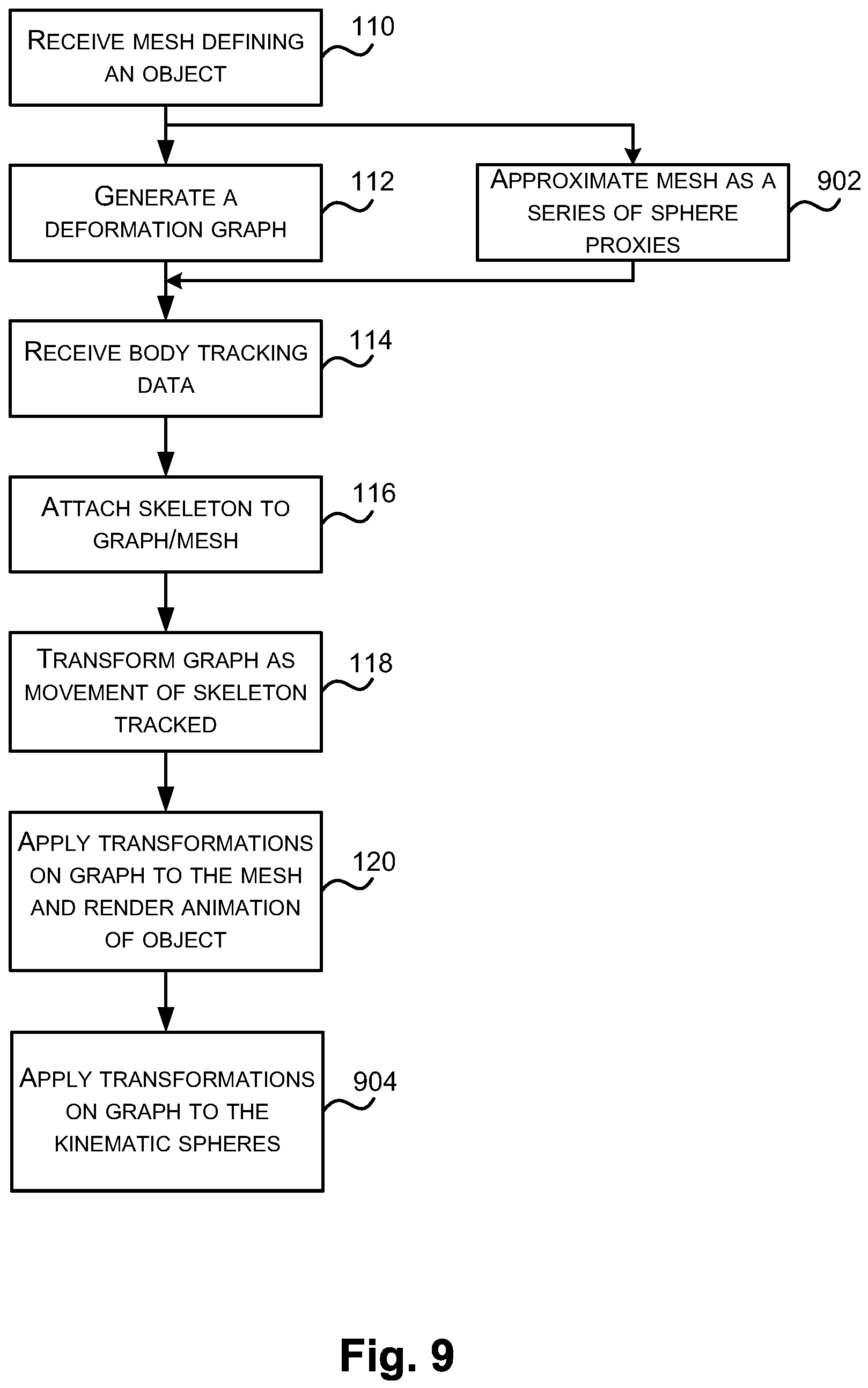