[0001] The present invention relates to a system for recharging portable breathing apparatus and more particularly to a portable system which can be deployed in hazardous and/or hostile environments such as for example within a structure such as the leg of an oil or gas platform in an offshore or onshore location or the tank of a vessel such as an oil or gas delivery vessel where personnel may need to be located for extended periods to carry out tasks including maintenance and repair work.
[0002] Personnel working in hazardous environments are often called upon to undertake tasks which require the use of portable breathing apparatus. For example in an oil or gas offshore platform, inspection or maintenance work may be required to be carried out internally within one or more of the legs of the platform. This can involve a team of workers having to be deployed to the required location within the leg and having to carry out the inspection or repair in difficult to reach areas.
[0003] Due to the materials which are present in the environment where the work is being done, portable breathing apparatus is often needed, both to allow the personnel to get to the required location, and also to allow the personnel to remain safely in location and carrying out the inspection or repairs as required. In the event of an emergency, the personnel have to be able to be safely recovered from the working location. It is possible that the recovery operation could take longer than the supply of air in the portably breathing apparatus used by the team of workers.
[0004] Backup systems must be provided to assist in the safe withdrawal in emergency situations. One option is for personnel to carry replacement canisters of air which can be used should the main working tank become depleted. A second option is to deploy additional backup canisters around the working location which can be accessed by personnel.
[0005] In a known system, a supply of replacement air canisters are deployed into the working environment in advance of the personnel being sent in. The replacement air canisters are typically mounted within a cradle or support frame which itself must be deployed into the environment. This may for example require the cradle to be lowered into a platform leg, or carried into the hull of a vessel. In either case, where space is at a premium and the working conditions are compromised due to the hazardous materials which are present, not only at the required work site where the cradle will be located, but also on the way to and from the site. For example walkways and ladders may be coated with a film of oil or water which can create a further hazard to be negotiated.
[0006] The cradle carries a plurality of air canisters which can be picked up by personnel and used to replace an empty air canister in the portable breathing apparatus. However, replacement of an air canister may involve a number of intricate steps including disconnecting the empty canister, temporarily connecting the breathing apparatus to a secondary air supply at high pressure, such as an air supply line which is lowered into the leg, removing the empty canister from the holder carried by the user, swapping the empty canister for a full canister from the cradle and reconnecting the breathing apparatus to the full canister. The environment within the leg of an oil or gas platform is typically very dark and dirty and the risk of contamination of the valves of the air lines is high when these are being swapped over in these conditions. The user must complete a set of delicate connections and disconnections whilst his hands, which are typically gloved, may be covered in oily water or other substances which will make the operation difficult and time consuming.
[0007] Each canister of air may provide up to 10 minutes of air for the user and so this operation of swapping out used canisters may have to occur many times during any recovery or escape procedure.
[0008] Furthermore, providing secondary air supply lines into the local environment for each of the workers in the team provides a further hazard as these lines can become snagged on features within the leg of the platform such as ladders which can interrupt the air flow. Additionally, the lines themselves represent a hazard to the workers as they have to avoid tripping on them in an already crowded and difficult work space.
[0009] The present invention therefore seeks to address these issues and provide a system for recharging portable breathing apparatus which can be deployed into a hazardous working environment to allow work to be safely carried out, and then recovered from the environment for deployment elsewhere.
[0010] According to one aspect of the present invention there is provided a system for recharging portable breathing apparatus, said system comprising a supply of high pressure air, a plurality of portable recharging stations, each recharging station being connected to the supply of air via an air delivery line, a valve portion mounted within a handle on each portable recharging station, said portion being connectable to a corresponding valve portion on a portable breathing apparatus in a push fit manner.
[0011] Advantageously the supply of high pressure air is provided at approximately 220 bar up to a maximum of approximately 300 bar.
[0012] As the valve portion on the recharging station is mounted within a handle, the user can grip the handle and push the corresponding valve portion attached to their portable breathing apparatus into the handle in a simple operation to connect the flow of air through the portable recharging station to a tank of their portable breathing apparatus. This avoids the need to connect different air lines to the valve on their portable tank and also prevents the respective valve portions on the recharging station and the portable breathing apparatus from becoming contaminated from materials within the environment where the user is working.
[0013] Preferably the handle comprises a cylindrical body within which the valve portion is mounted.

[0014] US2010/089489 describes a method and system for safeguarding the filling process of breathable air apparatus in which filling stations are permanently mounted within a building to provide storage for portable breathing apparatus and a supply of air which an operator can use in an emergency to supplement the air in a portable air tank.
[0015] US4862931 similarly describes a permanently installed system in which filling stations are mounted within a building to provide access for emergency personnel to top up the air supply in their portable breathing apparatus.
[0016] Advantageously the cylindrical body has a radially extending flange at either end.
[0017] Preferably the handle is connected to the portable recharging station via a flexible air line.
[0018] The flanges at either end of the body mitigate against the handle sliding out of the user's hand and thus provide further protection against contamination entering the valve. The handle will be easily grasped by the operator. As the valve portion is encased within the handle, this means that the operator can grasp the handle without touching the valve portion and so avoids dirt, oil, grease or other contaminants from fouling the valve. Furthermore, as the handle is easy to hold, even with wet or slippery hands or gloves, the valve connection can be made more securely, safely and more quickly, especially in an emergency situation when the worker is moving from recharging station to recharging station and refilling his portable air tank at each successive station he encounters.
[0019] Preferably the air supply is provided by a bank of air at 220 bar and the air supply further comprises a compressor to supply air to the various recharging stations remotely from the air supply.
[0020] Preferably each air delivery line comprises a high pressure air line.
[0021] Advantageously the air line is mounted on a reel within or adjacent to the air supply. Preferably the air line comprises a plurality of modular sections connected together with a valve at the connection points.
[0022] Advantageously a refill station is connected to the air line via a further length of air hose, through the valve.
[0023] The length of the air line is dependent upon the number of recharging stations provided with the system.
[0024] In some examples 120m of air line is provided on the reel.
[0025] An embodiment of the present invention will now be described with reference to and as shown in the accompanying drawings in which:

Figure 1 is a schematic view of a system for recharging portable breathing apparatus according to one aspect of the present invention;

Figure 2 is a schematic view of a recharging station of the system of figure 1;

Figure 3 is a cross sectional view through a manifold of the recharging station of figure 2;

Figure 4 is a schematic perspective view of the manifold of figure 3;

Figure 5 is a cross sectional view through a handle of the recharging station of figure 2;

Figure 6 is an illustration of an operator using a recharging station, and

Figure 7 is a schematic view of a recharging station of figure 1 in an open condition. 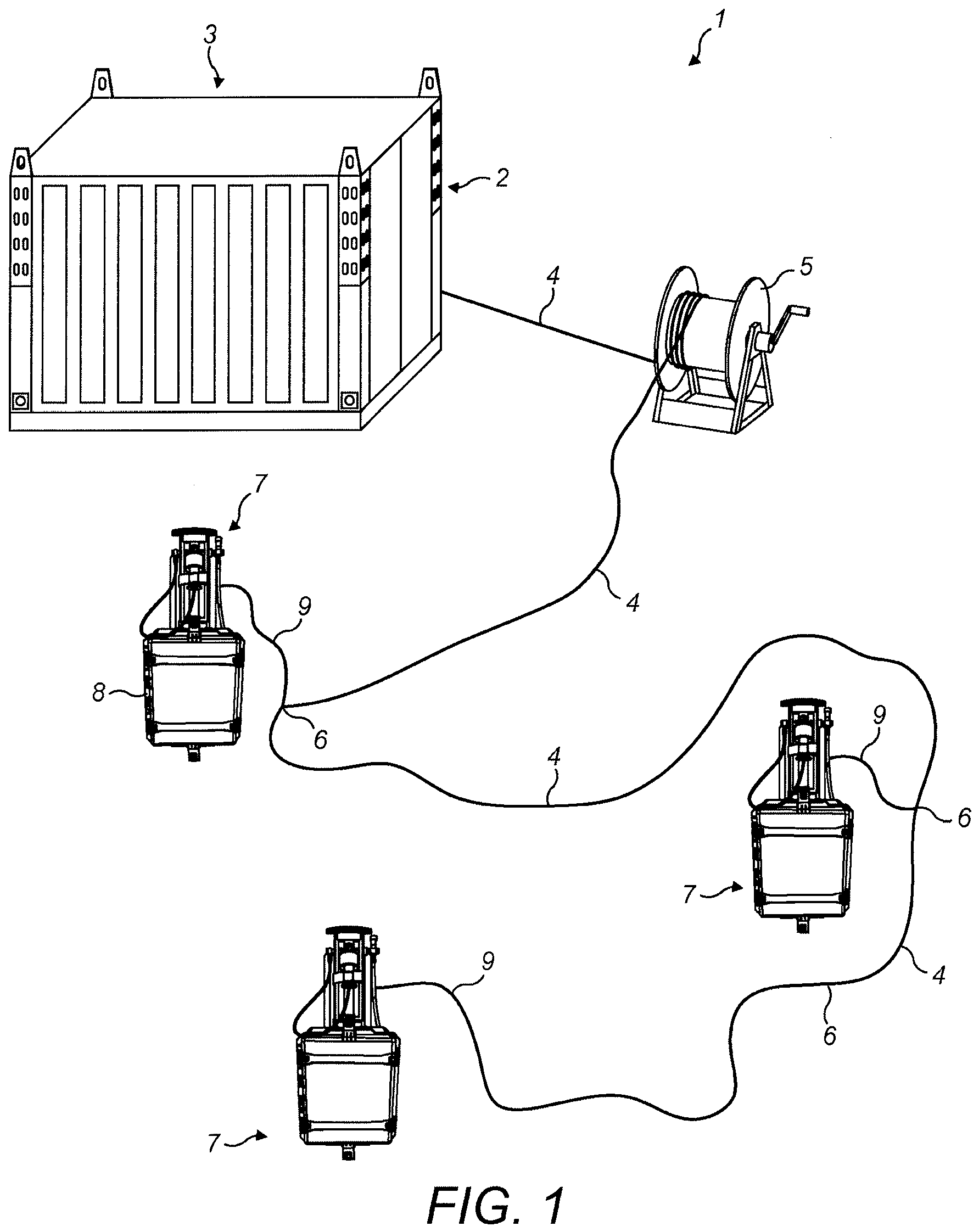 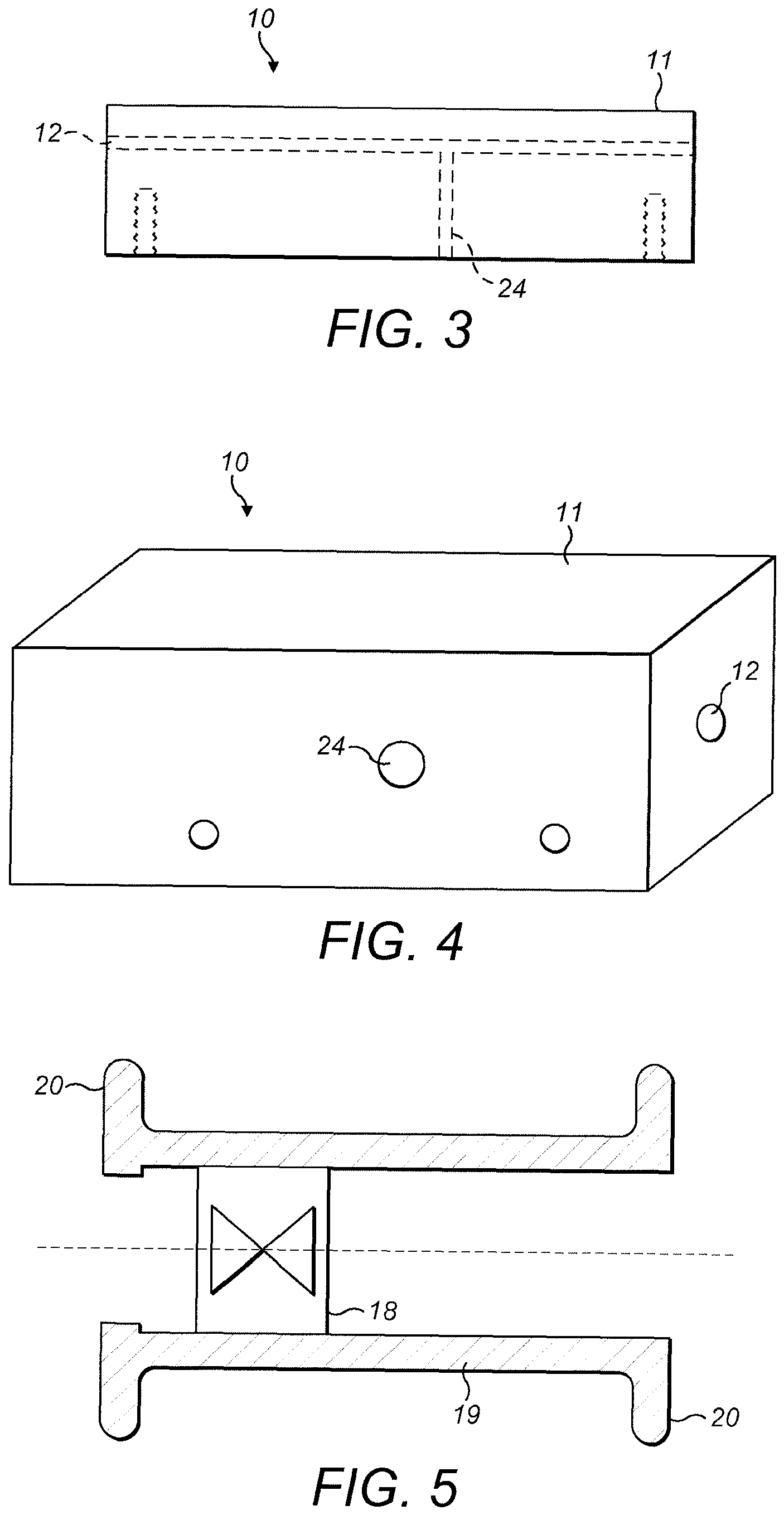 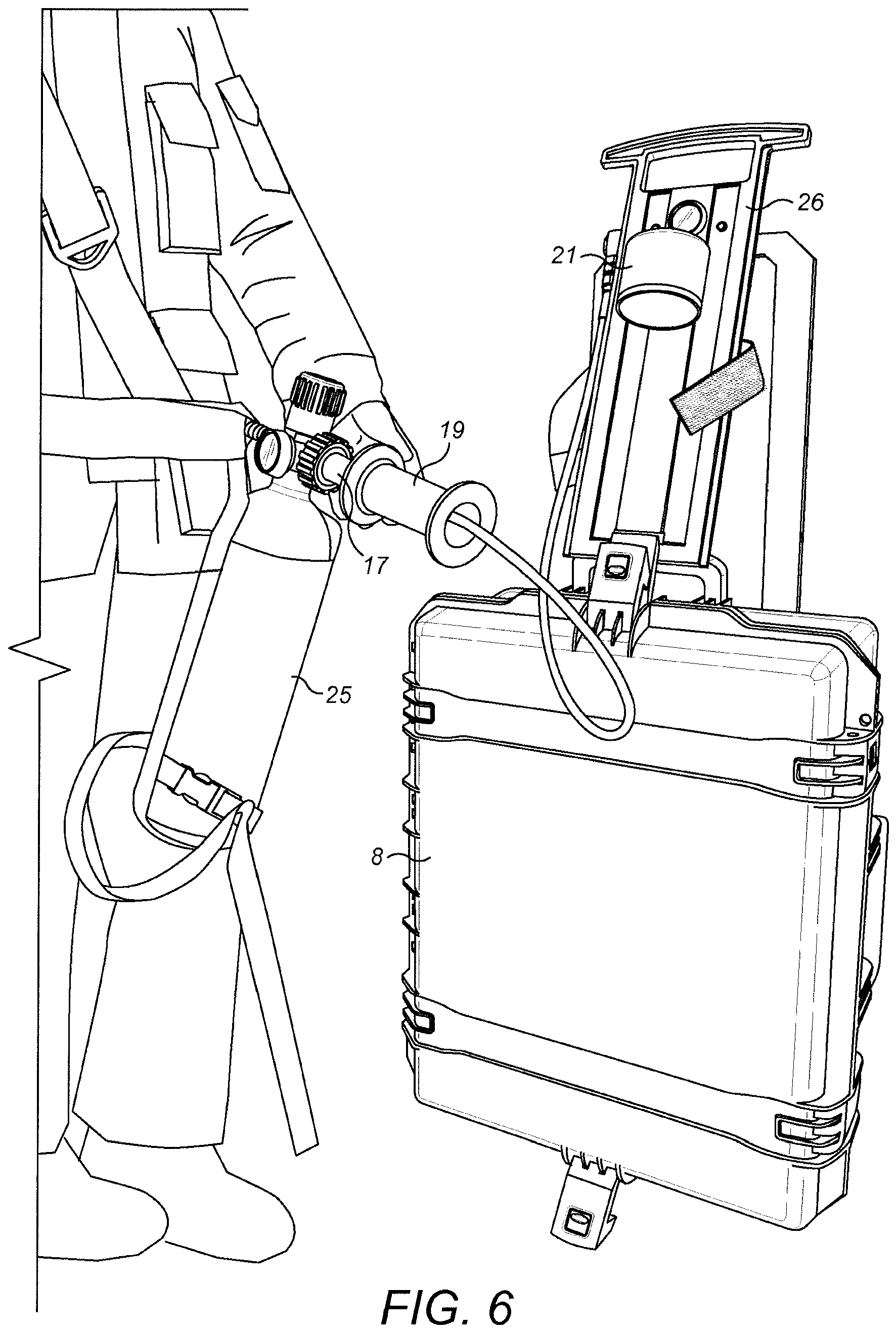 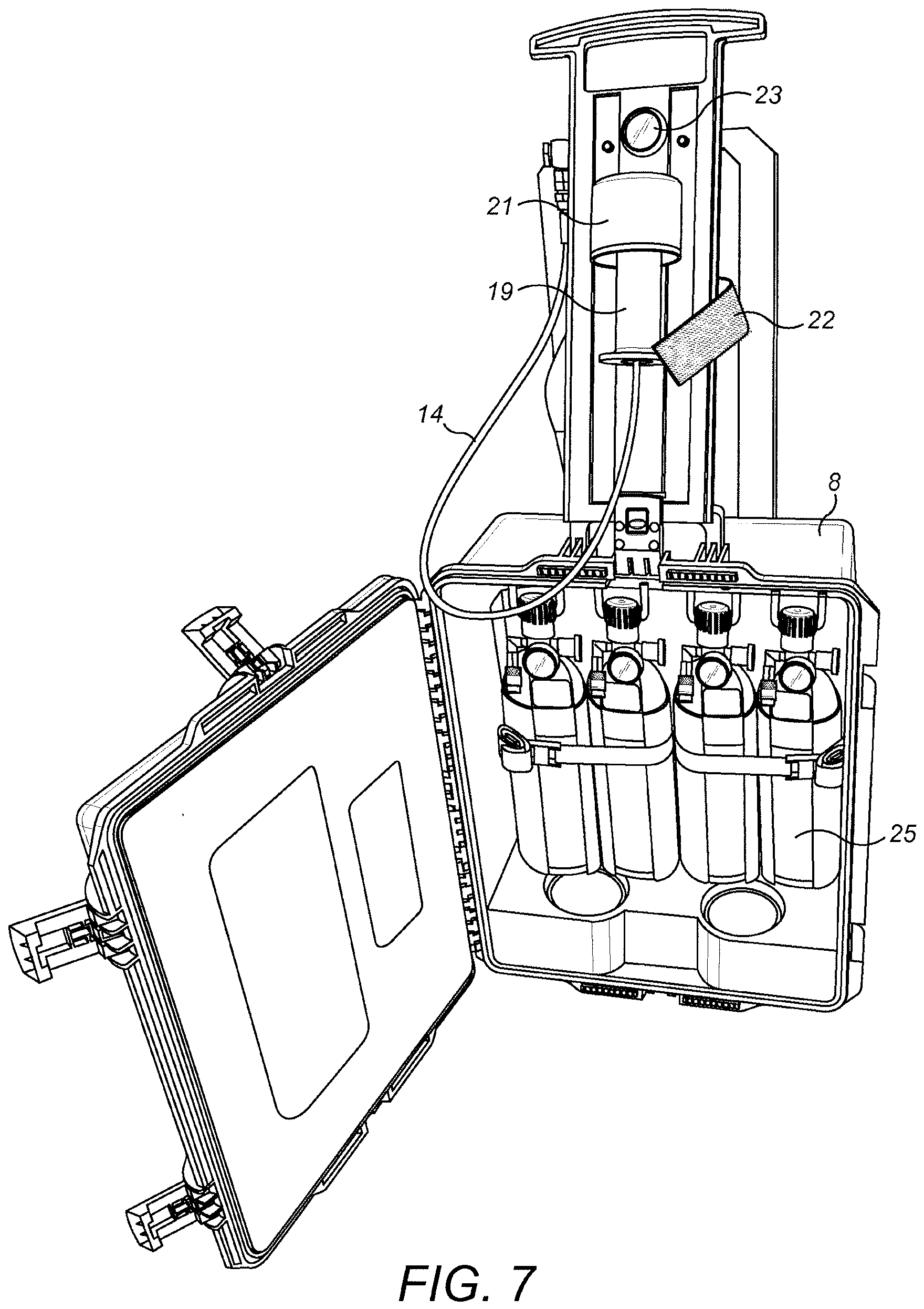