[0002] The basic operation of a conventional turbine is that expanding gases or pressurised fluids e.g. vapour stream or pressurised liquid (collectively, known as working fluids) are directed onto blades or set of blades mounted around a drum or shaft. The working fluid enters the turbine chamber where it impinges on turbine blades that are mounted around a centred shaft, causing the shaft to rotate and provide useful work. The turbine shaft work is used to drive devices such as an electric generator that may be coupled to the shaft. The shaft is typically mounted in sealed lubricated bearings on a horizontal axis that are required to be cooled to avoid lubrication failure. The energy that is not used for shaft work comes out in the exhaust as spent working fluid, so these have either a high temperature or a high velocity. The movement of the high pressure working fluid and high-speed rotation of the bladed turbine creates a high amount of noise.
[0003] Another type of turbine used at present is the pure reaction turbine where the rotor body is mounted around a stationary working fluid inlet that is centrally located in a channel within the rotating turbine head. The rotor body is provided with peripherally mounted nozzles in fluid communication with the flow channel within the rotor body. Working fluid is introduced into the channel of this type of rotor through a centrally mounted and stationary working fluid inlet and the working fluid flows through the rotor body and out of the peripherally mounted nozzles. The nozzles are directed such that the expelled high pressure working fluid causes thrust and rotation of the rotor. As with the conventional bladed turbine, the rotor is normally coupled to a shaft in order to extract useable shaft work.
[0004] One of the main issues with each of the above described turbines and rotor is that the shafts associated with the turbine and rotor, whether the shaft is the central mounting shaft for the turbine blades in the conventional turbine or the stationary working fluid channel inlet of the of the pure reaction turbine, must be supported in some manner allowing both rotation of the shafts or the rotor and also a low friction support mechanism that does not allow the escape of the working fluid. The loss of work output due to the friction can be substantial between the (i) shaft or and its support in the case of a conventional turbine or (ii) the rotor and the stationary working fluid channel inlet for the pure reaction turbine.
[0005] In addition, the working fluid for both the above described turbines is limited to only one working fluid.
[0006] One other problem with both types of turbines is noise emissions associated with the turbulent movement, super-sonic flow and impingement of the working fluid against the blades of the turbine as well as movement of the turbine blades for the conventional style of turbines or the super-sonic flow, and rotor arm movement of the pure reaction turbine.
[0007] A further problem, particularly with the stationary working fluid inlet and the rotor configuration of the pure reaction turbine, is that the working fluid inlet and rotor need to be sealed to one another to prevent or at least reduce the amount of inlet working fluid losses from the rotor by means other than the peripherally mounted nozzles, which would reduce the turbine efficiency. One way in which this can be achieved is through a complex multi-part arrangement of rotating bearings and sealing members. The bearing-rotating seal configuration of the above described turbines requires frequent maintenance intervals.
[0008] Both type of turbines have limited rotational speed by design at a given temperature and pressure of a working fluid and the rotational speed cannot be adjusted without changing the blade configuration or size with respect to conventional turbines or in the case of the pure reaction turbines the rotor arms.
[0009] United States Patent No. 4336039 provides teaching of a turbine for the generation of energy from geothermal sources including a reaction water turbine of the radial outflow type in a similar turbine for supersonic expansion of steam or gases. The rotor structure of this turbine may incorporate an integral separator for removing the liquid and/or solids from the steam and gas before the mixture reaches the turbines.
[0010] United States Patent No. 7722313 provides a device for converting kinetic energy contained in a fluid into mechanical energy coupled to either gassiness or liquid fluid mass outlet secondary conduit constituted by a fixed main conduit receptor of said fluid mass and a movable conduit coaxially attached to an axial flow rotor and associated to an outer support and frame.
[0011] United States Patent No. 433727 provides a rotary engine or waterwheel having a shaft within in a spiral passage, annular spokes or arm secured to said shaft and having passages communicating with said in the spiral passage and valves at the outlet of said passages of the spokes.
[0012] United States Patent No. 3 032 988 discloses a turbine in which the head, carrying ejection nozzles, is not substantially planar.
[0013] Clearly it would be advantageous to provide a turbine which is a capable of operation with multiple working fluids and which provides for variable rotational speed. It would also be advantageous to provide a turbine which is relatively low noise and which has reduced maintenance requirements

[0025] In order that this invention may be more readily understood and put into practical effect, reference will now be made to the accompanying drawings, which illustrate preferred embodiments of the invention, and wherein:

Figure 1 is a sectional side elevation view of a rotor assembly for use in a turbine according to one embodiment of the present invention;

Figure 2 is a plan cross sectional view of the rotor head for use in the rotor assembly of Figure 1; and

Figure 3 is a schematic view of the rotor assembly moulted in situ within a steam turbine system.

and wherein the flow chamber (114) is arcuate and divergent shaped without restrictions to produce a laminar flow of the working fluid out the plurality of nozzles (115) disposed in the circular head (104). 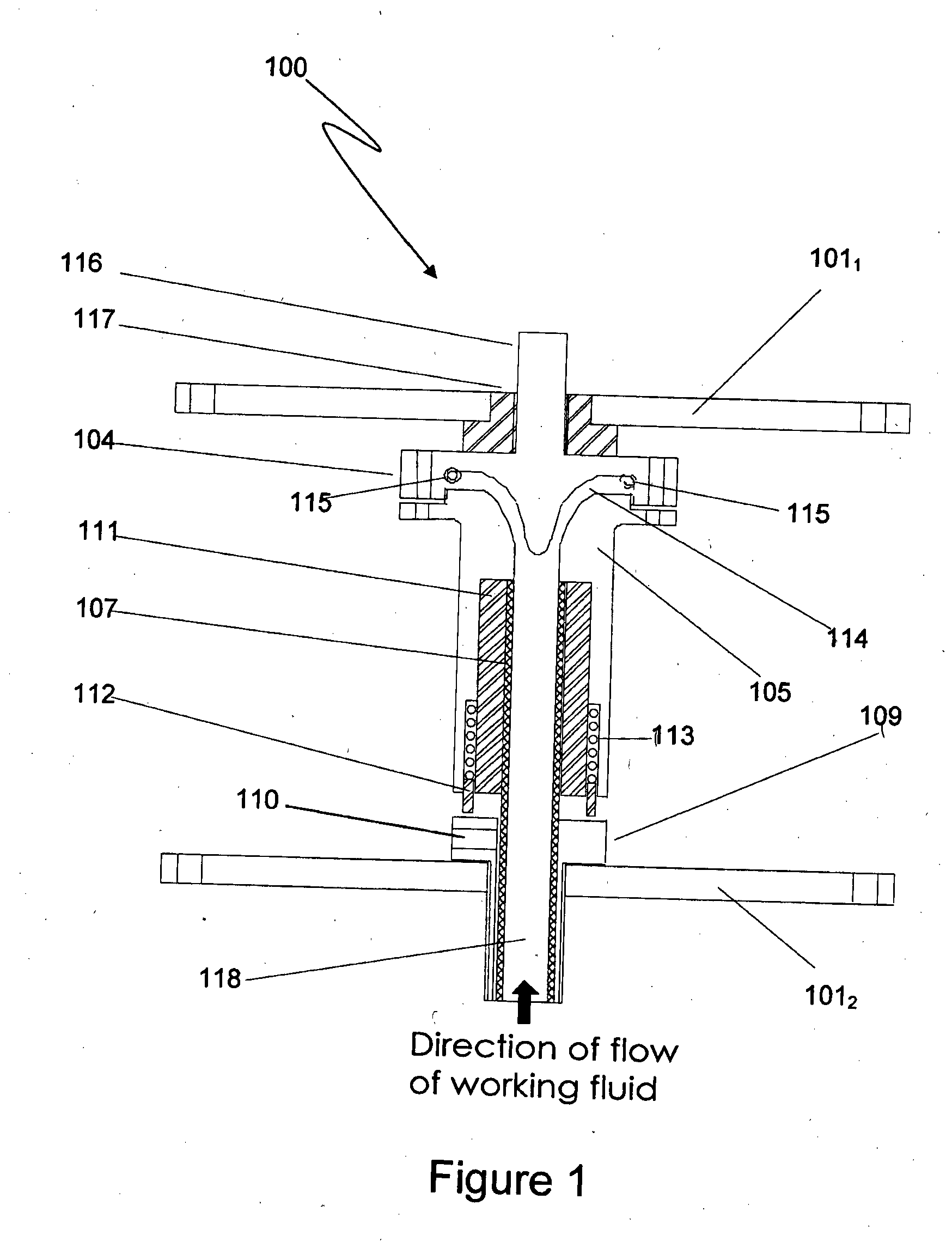 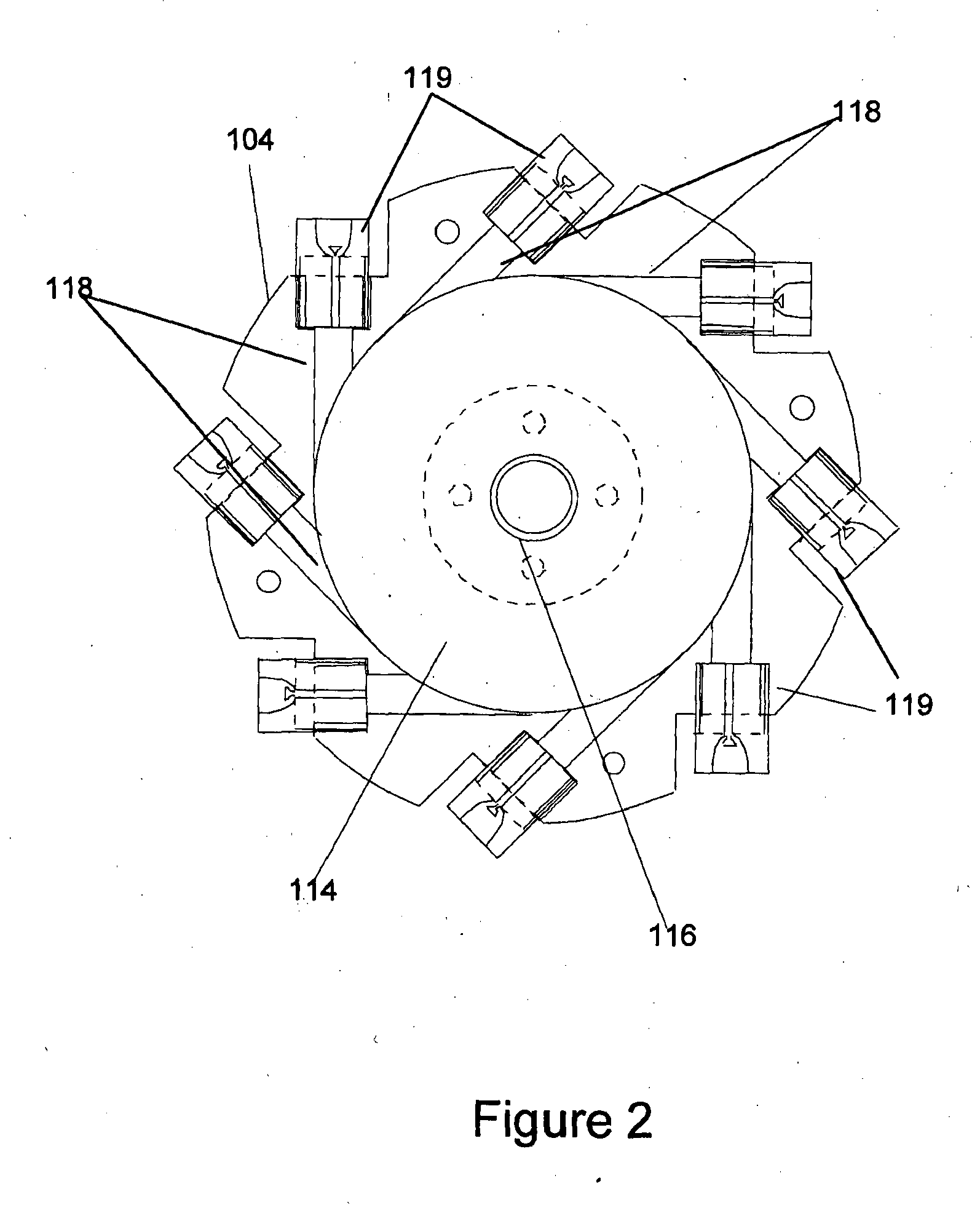 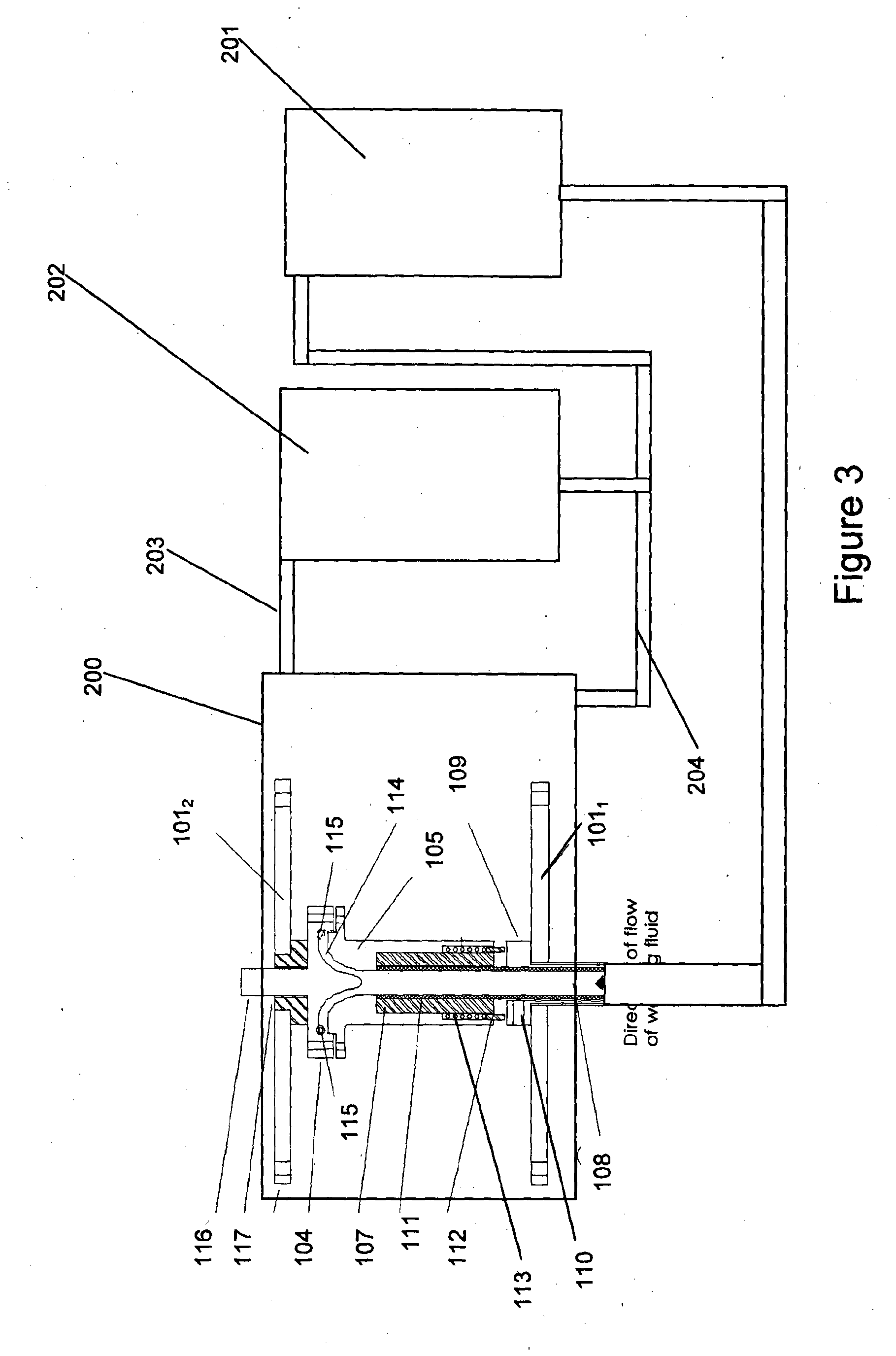