[0001] The subject of the invention is the manner of determining, by testing and assessing, the morphology of blast-furnace and cupola cokes, as well as chars. Blast-furnace or cupola coke is classified as high-quality coke, and its properties are described by a number of properties in terms of physical properties, including mechanical and chemical properties, taking into account the mineral substance included in it, described as ash. There usually exists a detailed description of the property parameter sets which is strictly followed in commercial relations. On the other hand, the necessity to compose coal blends earmarked for coking in modern systems of top-charging and stamped charged ovens with many coal components, often of unknown properties, developed the analytical research into its morphology, often together with the basic properties of the initial coal blend of variable density in both systems with potential additives.
[0002] As for the terms of structure and texture of coke there should be assumed the model division that it is a 3D spatial image reduced to porous and optical 2D texture. Porous texture is determined based on a 2D image, i.e. observed in the cross-section of the porosity and mass allocation in volume, through fractal dimension. Such a view suggests that it is a description of the structure of coke reduced to a 2D image. The fractal dimension calculated for a two-dimensional image is within the limits of the values 1-2. A more uniform, beneficial mass distribution results in the fractal dimension closer to 2. A chaotic mass distribution on a microsection of a coke sample, i.e. local large pores, canals or fissures cause a decrease in the value of the fractal dimension.
[0003] It is more complicated to determine the elements constituting the image of the anisotropic and isotropic texture. Based on standard ASTM D5061-07 entitled "Microscopic determination of the textural components of metallurgical coke" there are distinguished 11 types of textures within the binder phase, i.e. without taking into account the filles phase elements, starting from isotropic ones, and then after noticeable, incipient anisotropy to large band anisotropy, sometimes referred to as ribbon.
[0004] From the PL 174066 patent description there is known the manner of determining the fibrosity index of electrode cokes, consisting in analyzing microscopic microsections, conducted with the use of a computer, characterized by the fact that the subsequent digital images of a fragment of a microsection are divided into several subimages, and then for every subimage there is measured, with the use of a computer, the edge direction in a point, and those activities are conducted for all the subimage points. A circular histogram of subimage edges is prepared, after which its degree of elongation is calculated, then all the activities are repeated for a larger number of images. The fibrosity index of the texture is averaged as a final result.
[0005] In the article by Mariusz Minkina and Andrzej Mianowski Possibilities of computer recognition of coke texture anisotropy, presented at the II Scientific and Technical Conference "The Measurements of Fuel Parameters", Warsaw 2005, there were presented new possibilities of applying the computer method of image analysis to recognition of the degree of anisotropy of the textures appearing in cokes from hard coals. There was suggested the manner of classifying various types of textures based on the value of the anisotropy index and the average values of the image greyness degree gradient. The analysis was conducted for a group of perfect textures from hard coal vitrinites, with the use of the circular histogram algorithm.
[0006] The manner in the invention solves the problem of assessing and testing the morphology of cokes and carbonating agents, and is characterized by computer recognition of the image of its structure and texture.
[0007] The manner of specifying the morphology of cokes and chars, consisting in analyzing the microscopic microsections of coke from one microscopic view, is characterized in the invention in that under magnification, in reflected light, the image with strengthened anisotropic effect by a retardation plate or interference-differential contrast, is analyzed in the polarized light with cropping the image, to get the view of a predetermined size, showing the separated optical texture classified according to the ASTM D5061-07.
[0008] Preferably, from the image of strengthened anisotropic effect, with the use of the methodology of determining the fibrosity index of the texture, the grey color gradient vectors are determined the grey color gradient vectors within the isolated texture, and after calculating the respective indices of fibrosity, the average index,-is calculated in the form of one dimensionless value basing on the linear additivity law, taking into account the weight in the form of the volumetric shares, determined through prior quantitative analysis of textures, performed according to the ASTM D5061-07.
[0009] The proposed solution is characterized by a high degree of correlation with the technological quality parameters of coke, such as reactivity and post-reaction strength, designated through the tests of Nippon Steel Corporation. It is also the method of simplification of the description of coke texture quality description in comparison with manual methods, with the simultaneous minimization of the subjectivity of the assessment of coke texture. The manner described in this project is an introduction to the automation of the process of characterizing coke structure, necessary for the qualitative assessment of coke and for projection methods.
[0010] The photographs [Photo 1 - Photo 2] present the properly obtained test results, including:

Fig. 1 Photo. 1 Image of the coke with strengthened anisotropic effect.

Fig. 2 Photo. 2 Process of division into subimages constituting the samples of textures of the resolidified phase.

[0011] In the invention application example, there were used example colorful photos.

Example application of the invention

[0014] There was conducted the quantitative analysis of the types of coke textures as per the ASTM D5061-07 standard. The results for the tested coke sample are as shown in figure 3.

[0015] A series of photographs were taken with the intensified anisotropic effect in reflected polarized light (Photo 1), with the use of the λ retardation plate, in permanent, determined lighting conditions with magnification x500 with oil immersion, covering single isolated types of textures, consistent with ASTM D5061-07 (Photo 2). The images constituting texture samples may not contain a mixture of types of textures, or motives that are pores. It was necessary to maintain scaling individually for each image. The collection of image samples produced for the tested sample contained at least 5 images for each calculated type of texture (does not apply to inert organic and non-organic elements). We do not use compressed images, only formats without compression or with loss-free compression (PNG, TIFF, BMP).

[0016] For each image sample produced (Photo 2) there was conducted the measurement of the grey color gradient vector on the basis of the automatic digital edge detection. Colorful images should be automatically converted into a scale of greyness. Each image was divided into the segments using the mesh of a predetermined size, called image gradient points. With those segments, the direction and value of grey color gradients were measured. All the vectors measured within the tested gradient points, one vector per each point were collected and presented in form of a histogram in a polar set of coordinates, i.e. the middle of the histogram lies at the beginning of the coordinate system. In order to determine the shape (elongation) of the histogram, there was used the method of approximation of the histogram outline in an ellipse. The semi-axes of the ellipse circumscribed on the histogram were calculated, where a > b, and the Wi fibrosity indices were calculated based on the formula:

taking into account the weights in the form of volumetric shares xi in the Wi index shares where:

1. A method of determining the morphology of cokes and chars_by analyzing the microscopic cross-sections of a sample from one microscopic view of polished blocks embedded in the polymeric resin according to the well-known methods, wherein the method comprises the steps of:

a) taking one magnified photomicrograph by using a microscope with in a reflected, polarized light using λ retardation plate or the differential interference contrast,

b) cropping the image to generate the view consisting the individual optical texture identified according to the ASTM D5061-07, called sample image,

c) dividing the sample images into segments, using a mesh of a predetermined size to obtain the gradient measurement points

d) measuring the direction and value of a grey colour gradient vectors for every gradient measurement point, using the edges detection digital method, to create the gradient histogram, putting all of the vectors from one sample image together, according to the rule that the middle of each vector is placed at the beginning point of the coordinate system,

e) calculating the ellipse with a and b axes, where a>b, using the shape of the histogram as a base to define the shape of ellipse,

g) calculating the mean value of the fibrosity index as a dimensionless value within the whole sample using the additivity law, where the textures content measured according to the ASTM D5061-07 classification, is a weight in the equation, Wx= ∑xi × Wi, where xi is the volume content of the optical texture type and Wi is the fibrosity index of an individual texture type,

h) however the texture classified as filler phase texture, according to the classification from ASTM D5061-07 should use fibrosity index Wi the same as calculated for isotropic texture, in calculation of Wx.

2. The method as per claim 1 characterized in that the measurement is carried out in magnification x500. 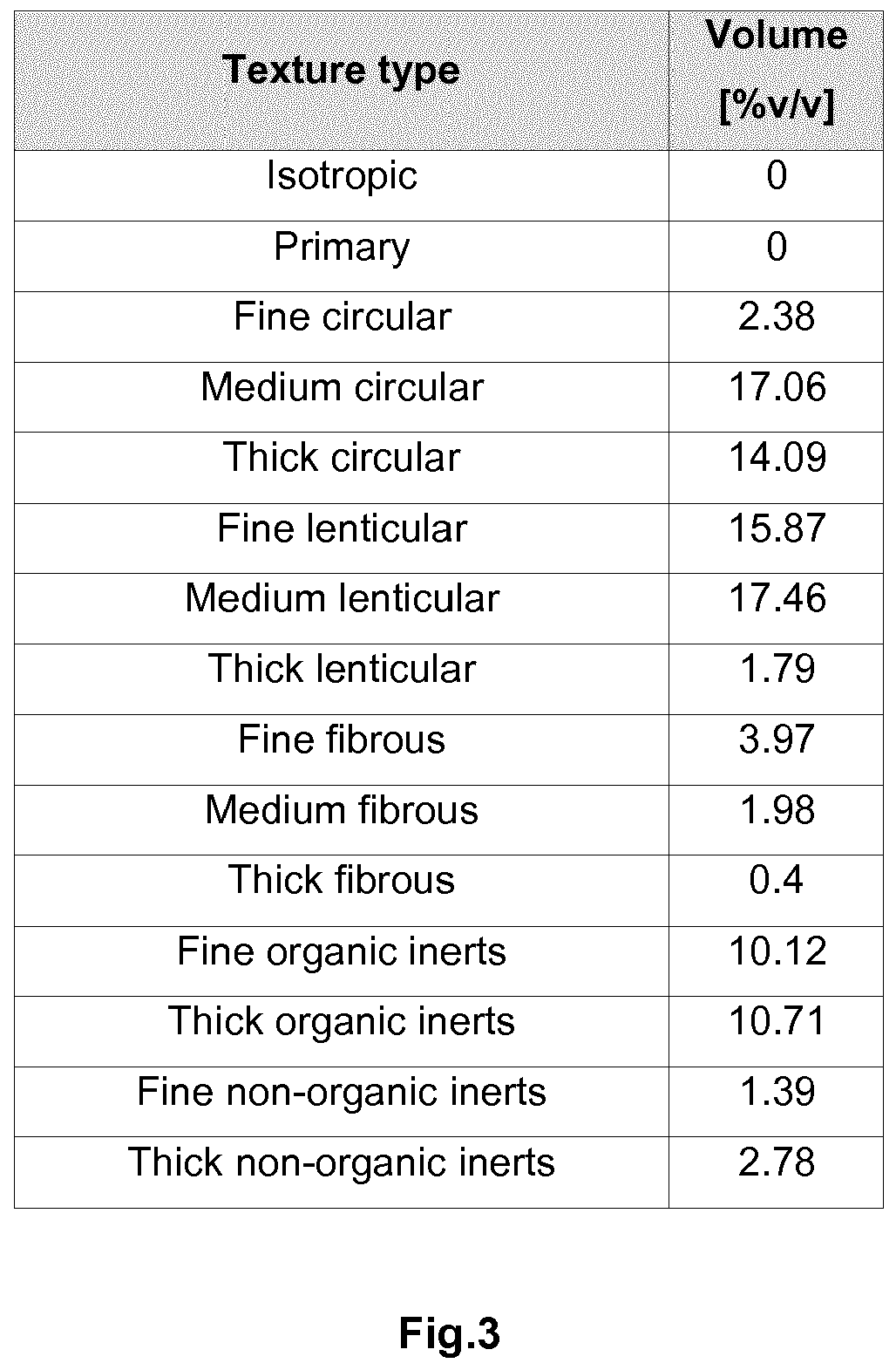