[0004] This invention relates to a method for emulsion layer measurement and profiling.

[0005] Process control systems require the accurate measurement of process variables. Typically, a primary element senses the value of a process variable and a transmitter develops an output having a value that varies as a function of the process variable. For example, a level transmitter includes a primary element for sensing level and a circuit for developing an electrical signal proportional to sensed level.
[0006] Knowledge of level in industrial process tanks or vessels has long been required for safe and cost-effective operation of plants. Many technologies exist for making level measurements. These include buoyancy, capacitance, ultrasonic and microwave radar, to name a few. Recent advances in micropower impulse radar (MIR), also known as ultra-wideband (UWB) radar, in conjunction with advances in equivalent time sampling (ETS), permit development of low power and lost cost time domain reflectometry (TDR) instruments.
[0007] In a TDR instrument, a very fast pulse with a rise time of 500 picoseconds, or less, is propagated down a probe that serves as a transmission line, in a vessel. The pulse is reflected by a discontinuity caused by a transition between two media. For level measurement, that transition is typically where the air and the material to be measured meet. These instruments are also known as guided wave radar (GWR) measurement instruments.
[0008] One type of probe used by GWR level instruments is the coaxial probe. The coaxial probe consists of an outer tube and an inner conductor. When a coaxial probe is immersed in the liquid to be measured, there is a section of constant impedance, generally air, above the liquid surface. An impedance discontinuity is created at the level surface due to the change in dielectric constant of the liquid versus air at this point. When the GWR signal encounters any impedance discontinuity in the transmission line, part of the signal is reflected back toward the source in accordance with theory based on Maxwell's laws. The GWR instrument measures the time of flight of the electrical signal to, and back from, this reflecting point, being the liquid surface, to find the liquid level.
[0009] Simple level measurement involves detecting the reflected signal from a single level surface, such as water or oil. A slightly more complex measurement is so-called "interface" measurement, in which a less dense medium such as oil floats on top of a heavier medium such as water.
[0010] In many industrial processes, such as crude oil processing, tanks may contain both oil and water. However, the boundary between the oil and water may be poorly defined due to mixing of oil and water at the boundary, Instead of being sharp and well-defined, a layer of variable, potentially large, thickness consisting of an oil/water mix may exist. This "emulsion" layer typically starts out as a high percentage of oil mixed with a small percentage of water near the top. The percentage of water in the mix generally increases until the percentage of water in the mix is high and the percentage of oil low near the bottom of the emulsion layer, eventually becoming all water and no oil. Advantageously, it is desired to profile the emulsion as by measuring the oil/water mix inside the emulsion.
[0011] Known GWR level instruments are good at measuring the two distinct levels created by a clean interface situation. Emulsions are a different matter. Because there is no clear transition from the oil to the water when an emulsion exists, traditional GWR instruments may perform poorly in these situations. The poor performance is due to several factors, one of which may be the probe itself. In traditional GWR embodiments, the center conductor and outer tube of the coaxial probe are made of metal, such as stainless steel. When measuring a water surface, for example, 90% or more of the radar signal is reflected due to the high dielectric constant of water. The little bit of energy that does penetrate the surface is quickly dissipated by the water, a polar compound. In addition, unless very pure, water tends to be conductive. This is especially true for salt water, which is frequently present in many crude oil processing applications. If the probe is constructed of metal, the conducting liquid places a "short" across the probe and will conduct and thus dissipate the signal energy very rapidly at the surface. This blinds the measurement instrument to anything happening below the water surface.
[0012] This situation is very problematic to emulsion measurement. If the percentage of water in an oil/water mix is high, the radar signal will not penetrate very far into the emulsion and all hope of seeing the emulsion bottom is lost. This is one of the reasons traditional GWR instruments do not work well in emulsions. Too much of the signal energy is reflected and dissipated by the water near the emulsion top. If the radar signal is dissipated and lost in the water, then there is no chance to see through thick, watery emulsions.
[0013] EP2 154 495 discloses a sensor having a tube i.e. coaxial line, with an inner conductor and an outer conductor to guide an electromagnetic signal. A microwave transmitter and a microwave receiver transmit and receive the signal to and from a tube end, respectively. A controller determines distance of a boundary surface based on a delay of the signal. A return conductor is connected with the inner conductor to return the signal from the other tube end in a counter direction. The signal in the direction is guided between the return conductor and another outer conductor. A method for measuring distance of a boundary surface according to a time domain reflectometry principle for measuring a filling level in a food industry is also disclosed.
[0014] US 2010/313654 A1 discloses a method of detecting an emulsion layer in a process liquid in a process vessel, the emulsion layer being between oil and water.
[0015] The present invention is directed to solving one or more of the problems discussed above in a novel and simple manner.

[0016] There is herein disclosed a method of measuring and profiling a process liquid in a process vessel in accordance with claim 1.
[0017] Advantageous features are defined in the dependent claims.

Fig. 1 is an elevation view of a guided wave radar instrument for emulsion measurement and profiling;

Fig. 2 is a block diagram of the instrument of Fig. 1;

Fig. 4 is a detailed view taken from the probe of Fig. 3;

Fig. 5 is an elevation view of a single rod probe;

Fig. 8 is an elevation view of a twin rod probe;

Fig. 9 is a side elevation view of the twin rod probe of Fig. 8;

Fig. 12 is a curve illustrating an echo curve for the instrument of Fig. 1; and

Fig. 13 is a time domain reflectometry curve obtained with the instrument of Fig. 1.

receiving a reflected signal from the transmission line comprising reflected pulses; and

operating a programmed controller (30) operatively connected to the probe (24) for measuring characteristics of reflected signal energy along the transmission line for profiling the emulsion layer (E).

2. The method of claim 1 wherein said probe (24) comprises a coaxial probe having a center conductor in an outer tube.

4. The method of claim 1 wherein the probe (24) comprises a twin rod probe with both of the rods including the insulating coating (56, 256).

5. The method of claim 1 wherein the probe (24) comprises a single rod probe with the rod including the insulating coating (56, 256).

10. The method of claim 1 wherein measuring characteristics of reflected signal energy along the transmission line comprises identifying an end of probe signal. 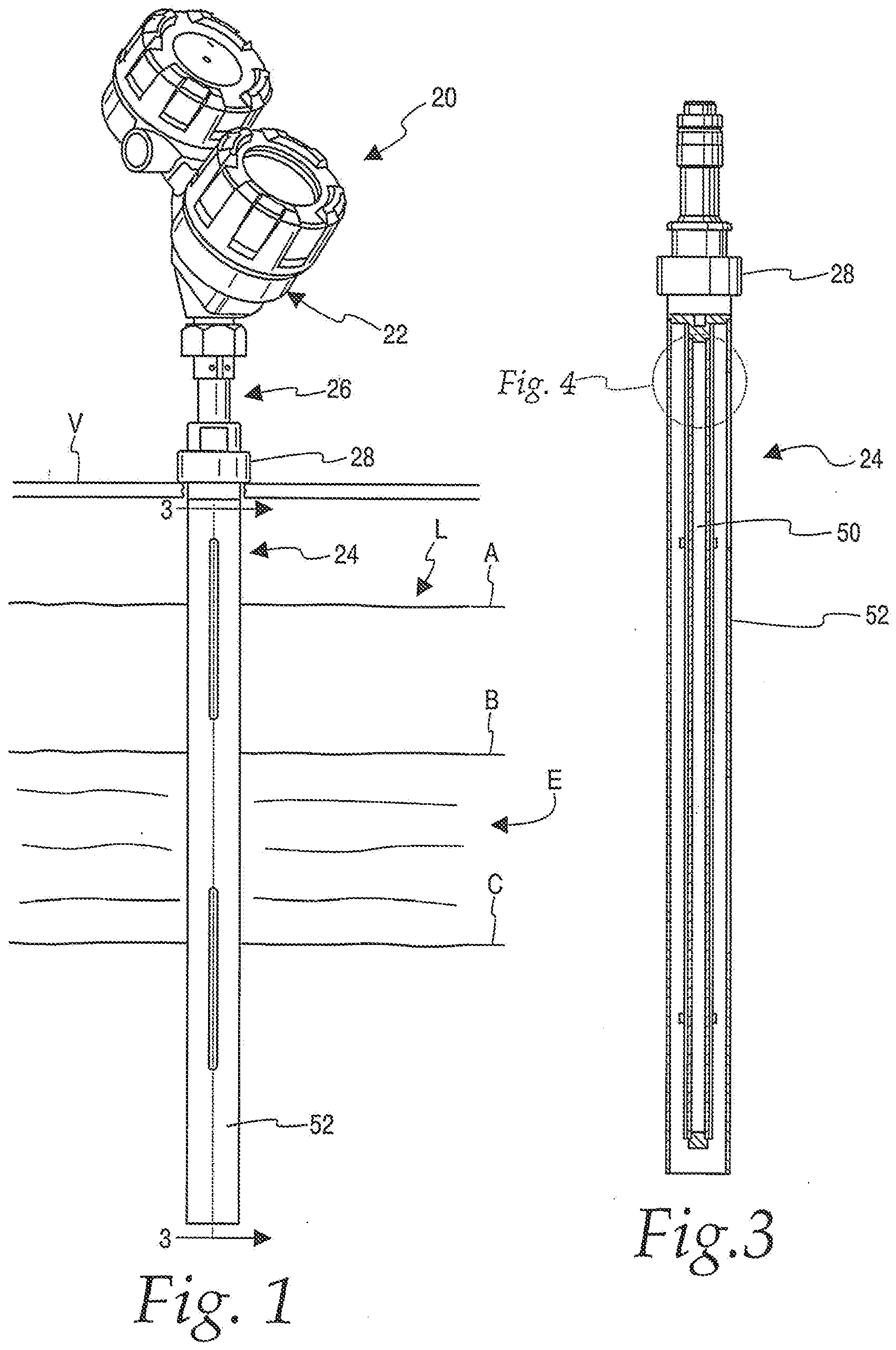 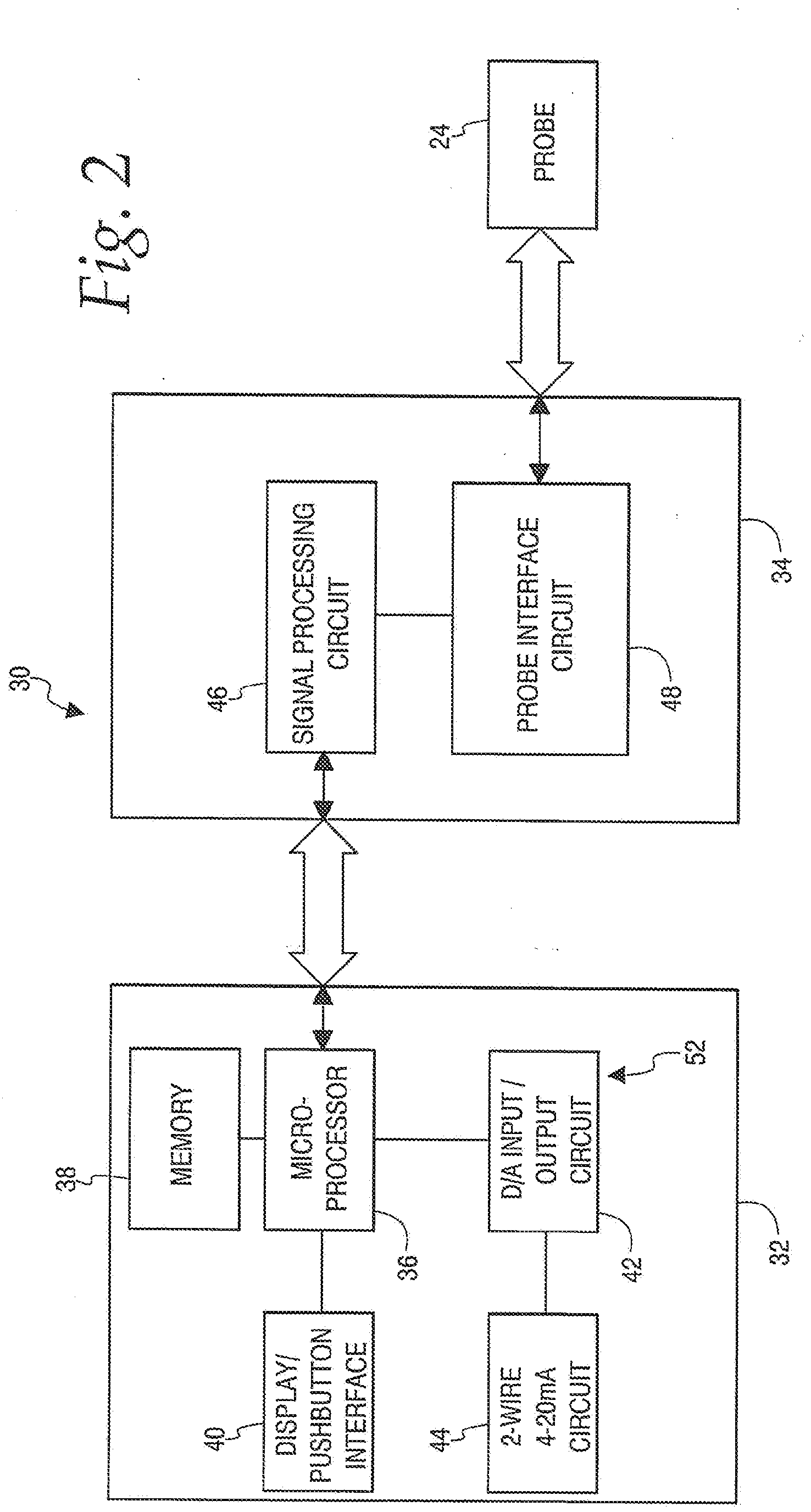 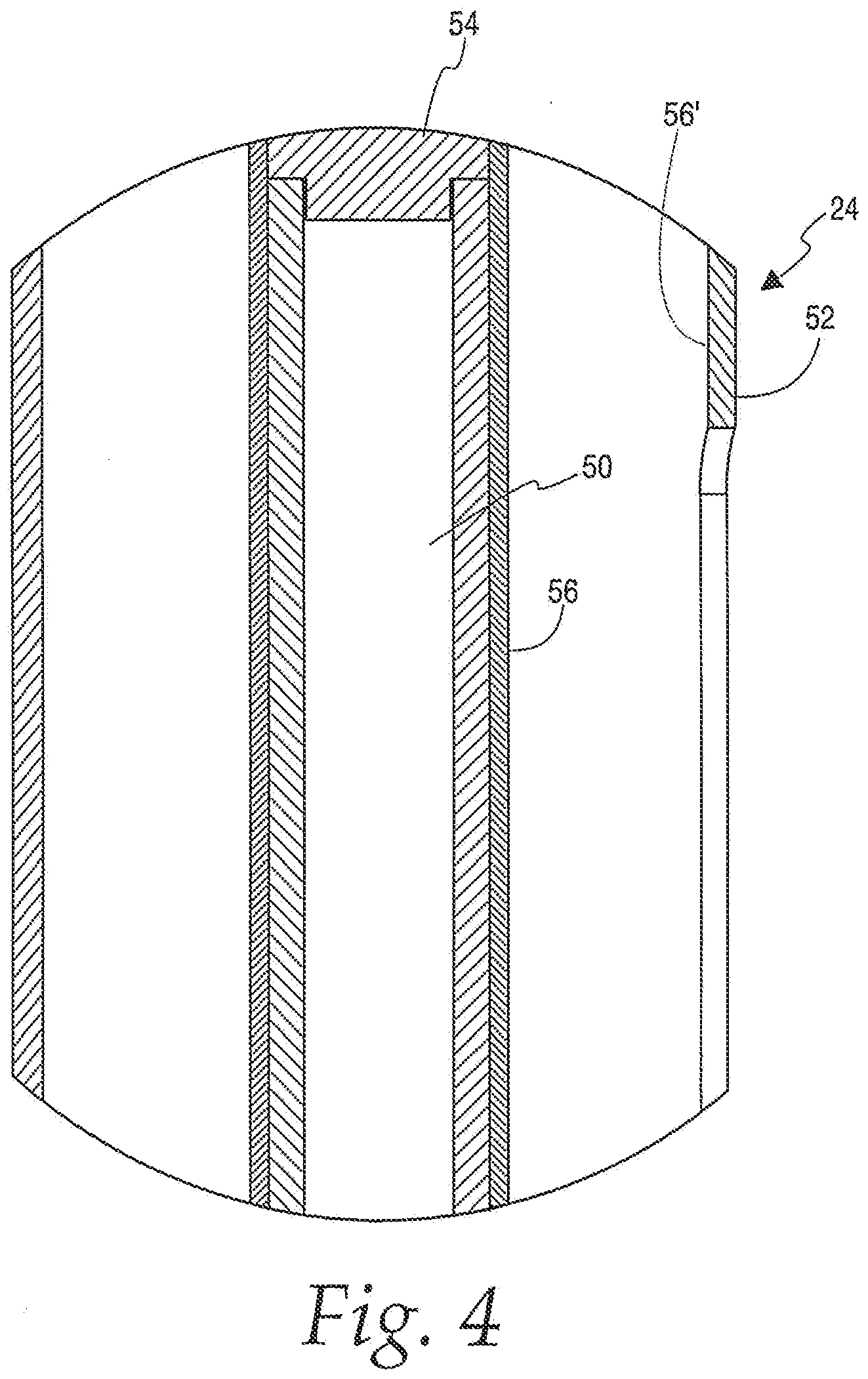 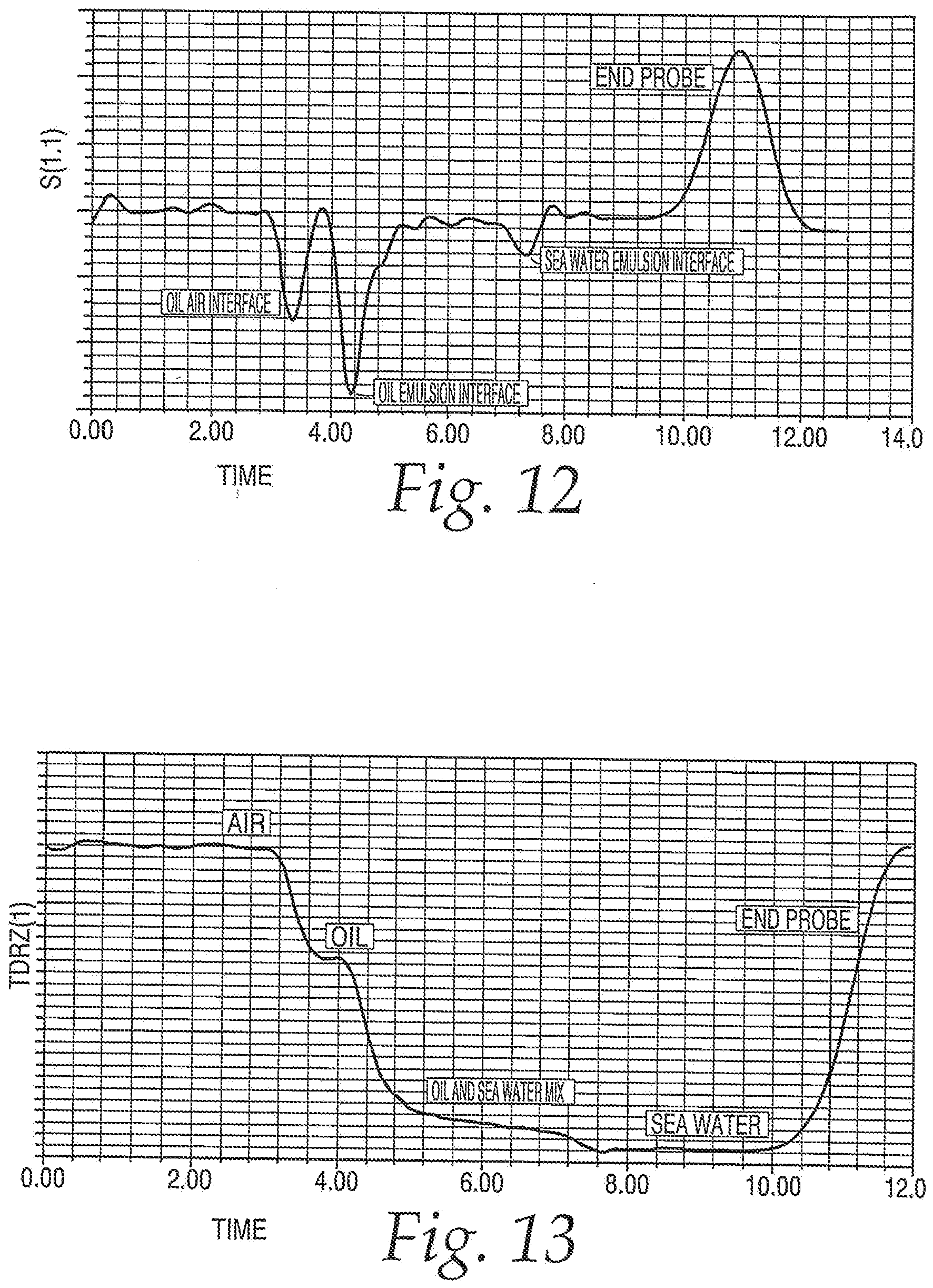