[0001] With this device is possible to take a shower in aroma shower having a very high average cost of a joint shower system, installed in home or in the general public and private structures.
[0002] Alternatively there is also the possibility to choose the models speakers, binding functions, forms and colors, designed to accommodate aromas, they replace the diffuser installed maybe chosen to shape and / or color and / or functions.
[0003] Other alternative exists on the market consist in pods for different method and ease of integration, with structural impossibility of use other pods that last few minutes of shower and difficult to clean and / or check the status of any utilization.
[0004] With this new device i want to add a function to a normal shower and a quality to the well-being of the person without having to replace any part of the system existing shower and alter the aesthetics and functionality of any shower diffuser already installed.
[0005] This device consists of two half shells , one male and one female, including filter, arranged to contain a tablet or spheres aromatic, usable in the field of sanitary and welfare of the person the male half-shell is connected to the water pipelines and the female half-shell can be connected to the different user's choice like downstream of the tube, the diffuser or shower, upstream of the tube, to the fitting fixed to the wall or to the handle tub; you get two final solutions as illustrated (fig. 3 e 4).
[0006] These two half-shells are snapped and containing inside them the tablet or balls aromatic.

1. The device titled " Half-shell male and female for pads or balls aromatic " is characterized by the technique of realization, in detail male and female half-shell, inside which is placed the pad interchangeably. The half-shell with ergonomic grip allows the full opening of the device for the functions referred to in Claims No. 3 and 5;
2. The device is made of materials composition, structure and function , make the device accessible to a wide audience including cost of purchase costs , ease of installation, ease of maintenance, simple operation ;
3. The device as realized , allows the use of pads aromatic , detergents, balsamic ; the device thus structured as easy replacement and interchangeability of the pads, though not exhausted. The simplicity of opening the device as indicated in claims 1 and 2, which involves the replacement of the pads can be performed by any user, employing a few seconds;
4. The device can be installed in any shower system , without changing the structure of the hydraulic plant. Simplicity of installation does not require masonry interventions , plumbers interventions , or structural interventions, plant engineering , no use domestic and / or industrial tanks , no use containers or filters. The device is particularly suitable for domestic applications;
5. The device, as claimed in claims 1-2-3 , is characterized by the practicality of the full aperture of the device for the replacement and the internal cleaning of the device itself. Furthermore, the ergonomic handle facilitates greater the opening operation of the device and facilitates the convenience;
6. The framework established allows instant control of the power state of the pad placed inside. The visual control is facilitated by a small transparent window positioned on the housing of the tablet ;
7. The device consists of two half-shells, is characterized by the functionality and simplicity of the operations of internal cleaning for the removal of residues and / or limestone , in order to keep its high functional effectiveness and make always pleasant and optimal user its use in the shower. 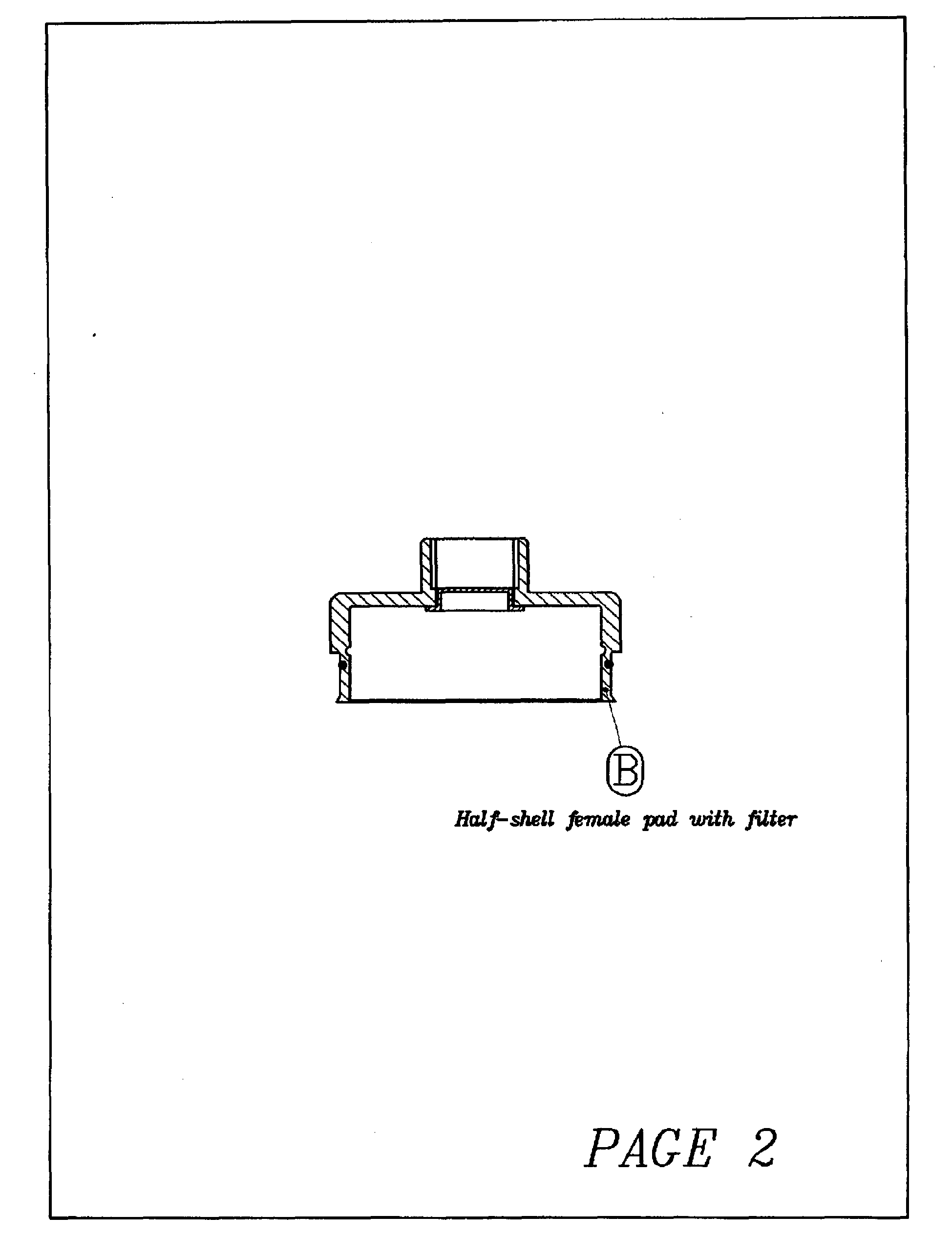 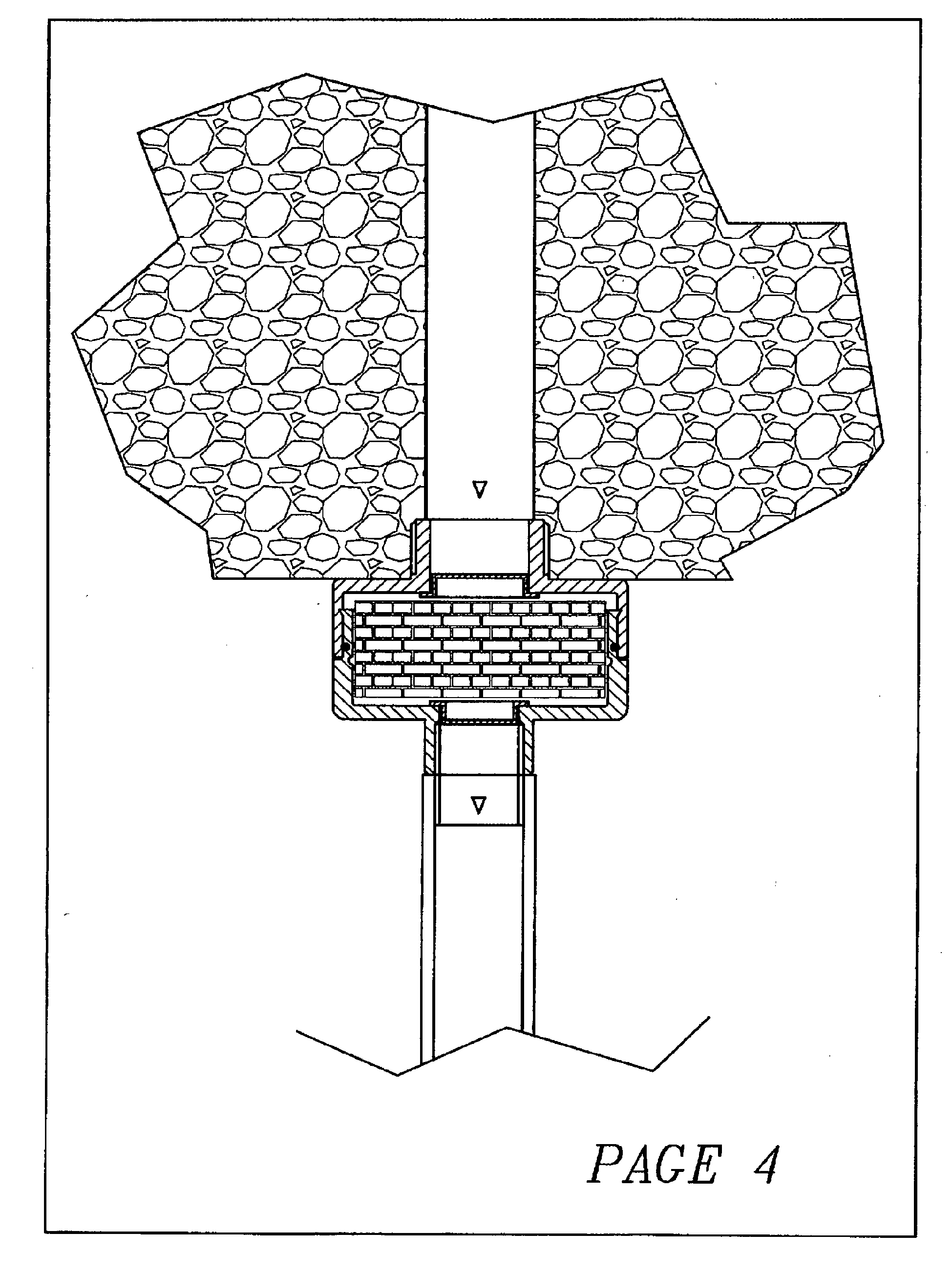 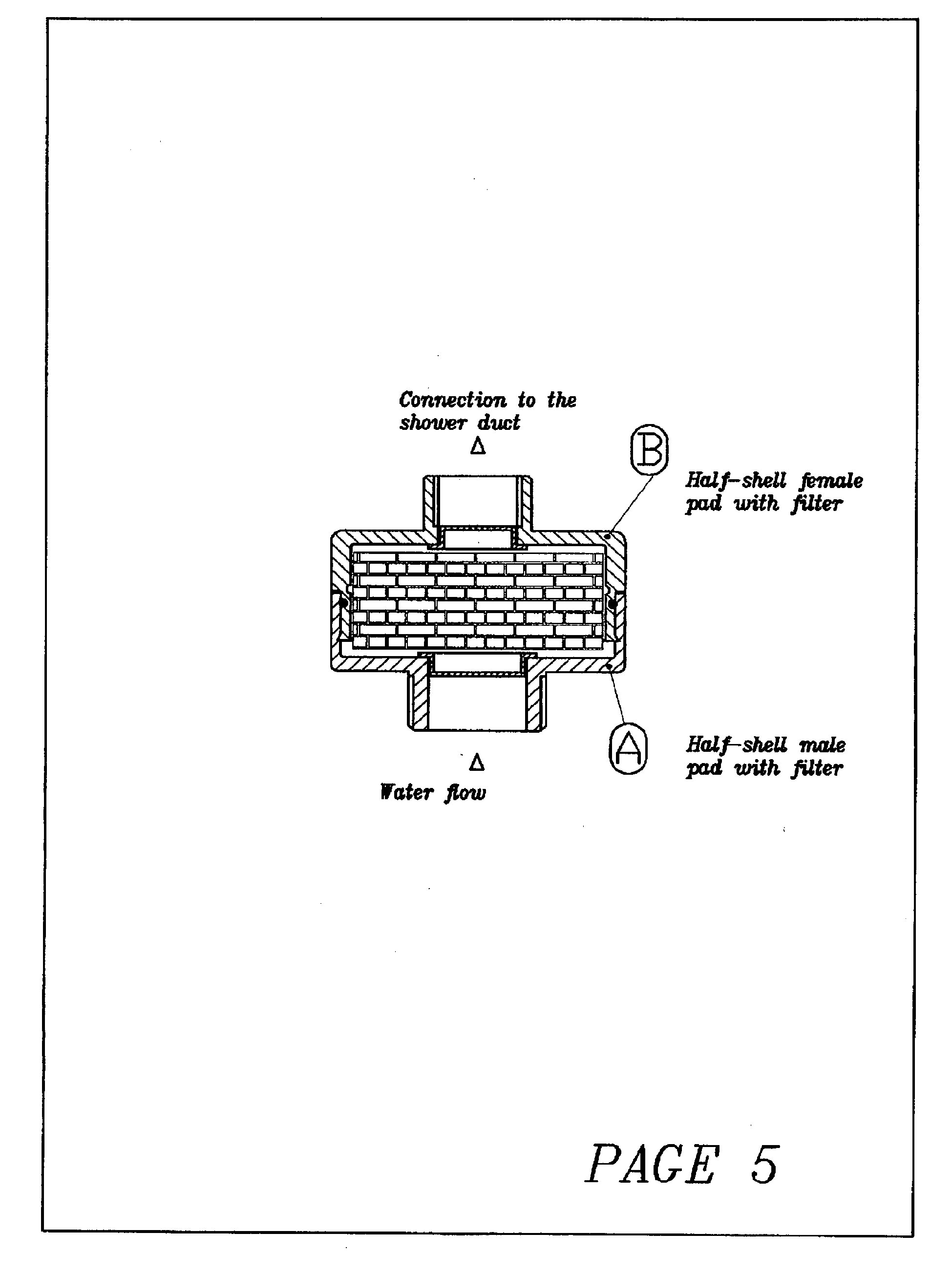