[0001] This application claims benefit of U.S. Provisional Application No. 61/940,464 filed on February 16, 2014, the contents of which are hereby incorporated by reference as if fully set forth herein.

Field of The Invention

[0002] This invention relates to the field of latches in the mechanical arts for holding adjacent moveable panels in a fixed position. More specifically it relates to a bi-modal pressure release "blowout" latch for use in aircraft.

Background of The Invention

[0003] A blowout latch is a type of latch that releases when excessive pressure is applied to the panel or door which the latch secures. These latches can have many applications but are typically used on aircraft in places such as on the panels which cover the aircraft's engine. When excessive pressure is applied to the enclosing panels, the blowout latch will allow the panels to open to avoid damage to the panels or other aircraft structures.
[0004] Such panel latches are disclosed in e.g. EP 1 197 619 A1 and WO2011/069103 A1.
[0005] A desired feature of blowout latches is the ability to alternately manually open the latch. Another desired feature is a prominent visual indication of when the latch has been released.
[0006] A problem exists with prior art blowout latches, however in that they are undesirably complicated, heavy, and relatively non efficient for aircraft applications. There is therefore a need in the art to provide a latch that overcomes these deficiencies.

[0007] The applicant has devised a pressure release or blowout latch that provides all the desired traits recognized in the art with a more compact, efficient and light-weight design. Applicant's pressure release latch can also be manually operated, and prominently shows when the latch is open even if the panels appear to be closed.
[0008] Applicant's latch mechanism includes a rotatable bolt that abuts a first panel, which is adjacent to a second panel to which the latch is affixed. The bolt is restrained by a linkage that operates at one end of the bolt against a pressure-actuated spring. In accordance with the mechanical relations of the linkage, the bolt will release soon after the opening force against the bolt exceeds a selected restraining force of the spring. When that condition occurs, the linkage will have deflected the spring and moved to a position where the end of the linkage bearing against the spring loses it mechanical leverage with respect to the bolt. Thereafter the bolt is free to continue rotation to the fully open position.
[0009] Alternatively, the latch of the invention includes a manual trigger release that disables the restraining linkage and thus permits free movement of the bolt to the open position urged there by a bolt-opening spring. By depressing a trigger, one end of one arm of the linkage which is otherwise held in a fixed position by the trigger is allowed to move within parallel slots of the latch housing in a direction away from the bolt pivot. This sliding movement of the linkage disables its restraining affect on the bolt, which will then open. The latch includes a manual reset pad affixed to an end of the bolt that is of sufficient size so that it is convenient to operate and is easily visible from a distance to indicate when the latch has been opened.
[0010] More specifically, the applicant has invented a panel latch comprising a housing with means for attachment to a panel. The housing carries a bolt rotatably affixed at a bolt pivot joint that permits it to rotate between closed and open positions. A second joint on the body of the bolt receives a pinned first end of arms of a bolt restraining linkage. A second end of the arms is attached to a pair of levers by another pinned joint located at an intermediate point along the length of the levers. A first end of the levers is rotatably and translatably affixed to the housing and selectively secured against translational movement by a trigger that is manually moveable between secured and released positions. When the trigger is moved to the released position, the first end of the levers is then free to move away from the bolt thus disabling the restraining linkage and permitting the bolt to freely move from the closed to the open position. In one embodiment the levers are triangular plates that operate on opposite sides of the housing.
[0011] The bolt can also be moved to the open position without actuation of the trigger when excessive external opening pressure is applied to the bolt. A second end of the levers can move when a retaining spring assembly operating against that end of the levers is deflected by force transmitted from the bolt though the linkage. The various pinned joints of the linkage form a toggle linkage so that as the spring assembly is further deflected by the bolt force, movement of the levers places the joint at the first end of the linkage arms in an over-center position between the lever joint and the bolt pivot joint. When this position is achieved, the restraining force of the linkage against the bolt is released thereby permitting the bolt to freely continue its movement to the open position urged by the bolt spring.
[0012] The latch of the present invention provides many advantages over similar devices in the art including reduced weight because two functionalities are provided by a single mechanism. Also, it provides reduced complexity because the device has fewer components and requires no tools to open the latch. The device also provides a reduction in volume by eliminating the need for additional assemblies. Finally, the means by which the spring mechanism is actuated allows the device to be a significantly more efficient mechanism during the pressure relief operation.
[0013] These and other advantages will be apparent from the following drawings and description of the preferred embodiment. In this respect, before explaining at least one embodiment of the invention in detail, it is to be understood that the invention is not limited in its application or to the details of construction in the following description or illustrated in the drawings. The invention is capable of other embodiments and of being carried out according to the scope as described in the appended claims.

Brief Description Of The Drawings

Figure 1 is a top right front perspective view of one embodiment of the invention.

Figure 2 is a partial sectional view taken along lines 2-2 of Figure 1.

Figures 5a-5c are sequential left side elevations of the device in various configurations.

Figures 6a-6c are sequential left side elevations of the device in various configurations.

Figure 7 is a bottom right view of the latch with related panels.

Description of The Preferred Embodiment

a housing (3) having downward extending opposite sides and a top planar portion including means for attachment to a panel (A);

a bolt (4) rotatably affixed to the housing (3) at a pivot joint intermediate first and second ends (4a) of the bolt (4), said bolt (4) being moveable between closed and open positions and being held in the closed position by a compression linkage, comprising;

a second joint on the bolt (4) connecting a pinned first end of restraining arm means (6) of said linkage;

a first end of the lever means rotatably and translationally affixed to the housing (3) by a slide pin (10) residing within and extending between opposing slots (3b) in said housing (3) sides;

a trigger (1) affixed to the housing (3) selectively moveable between secured and released positions and having a catch portion (1a) abutting the slide pin (10) preventing translational movement of the lever means (9) first end when the trigger (1) is in the secured position; and

wherein the bolt (4) can move freely from the closed position to the open position only when the trigger (1) is in the released position. 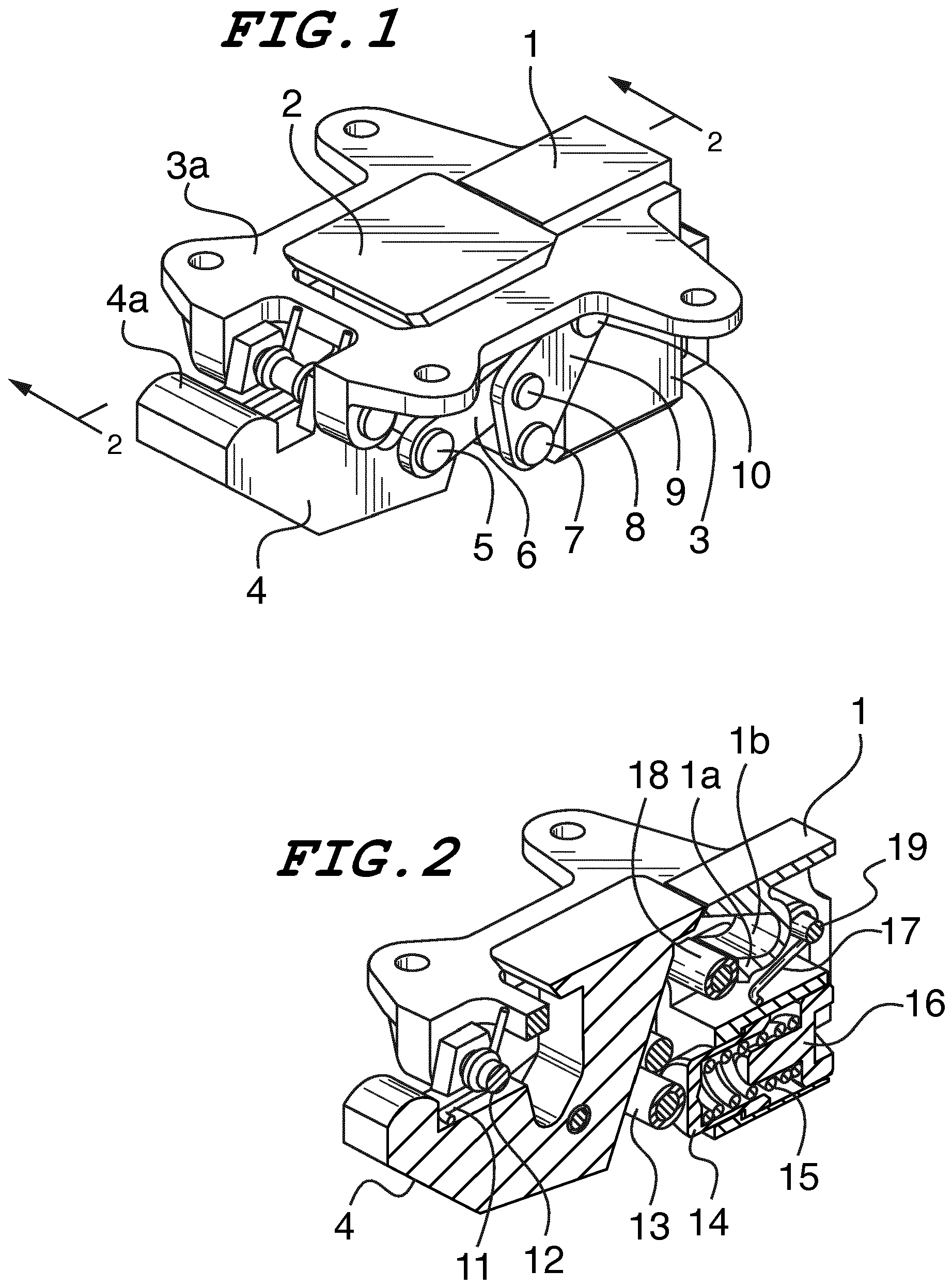 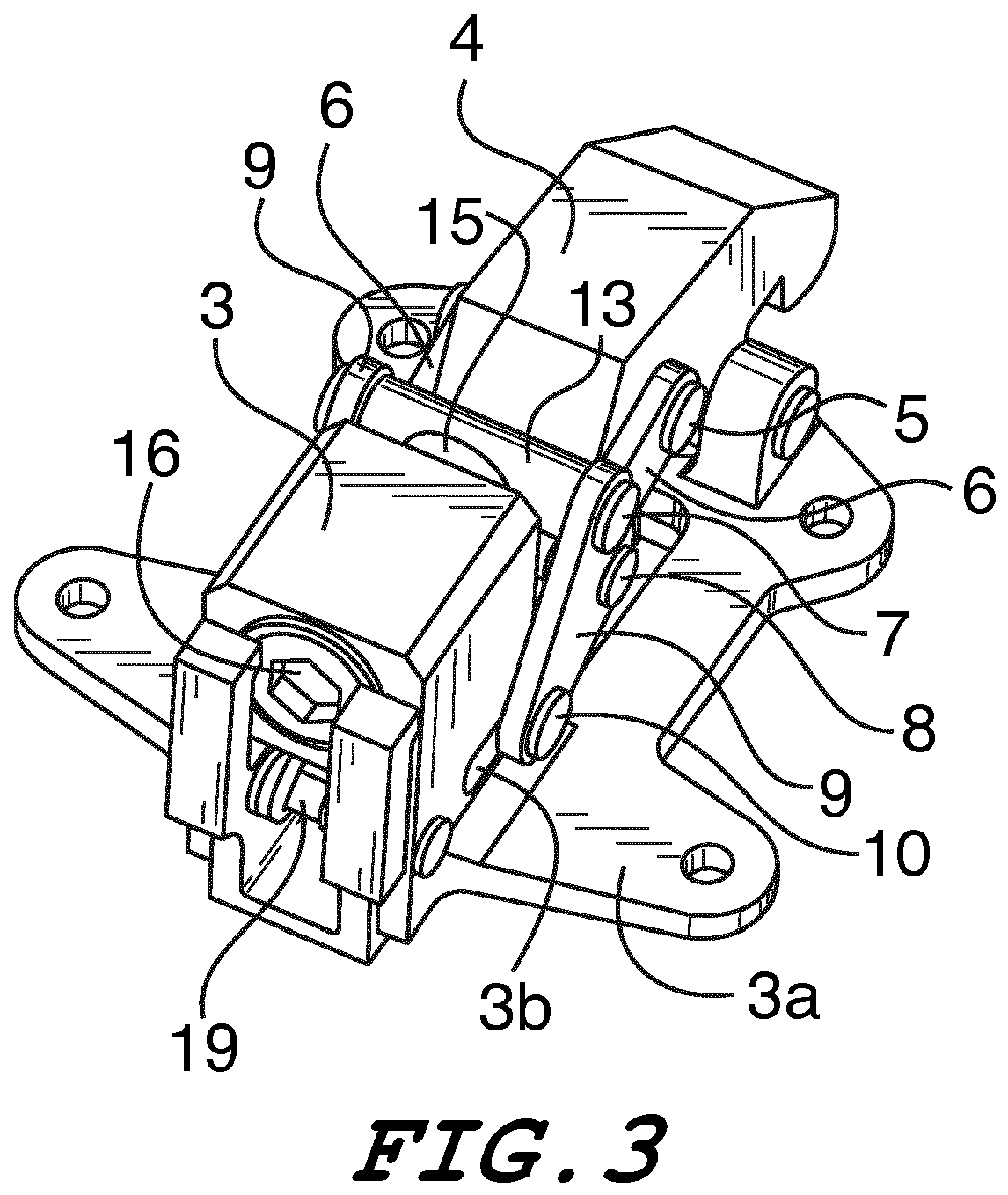 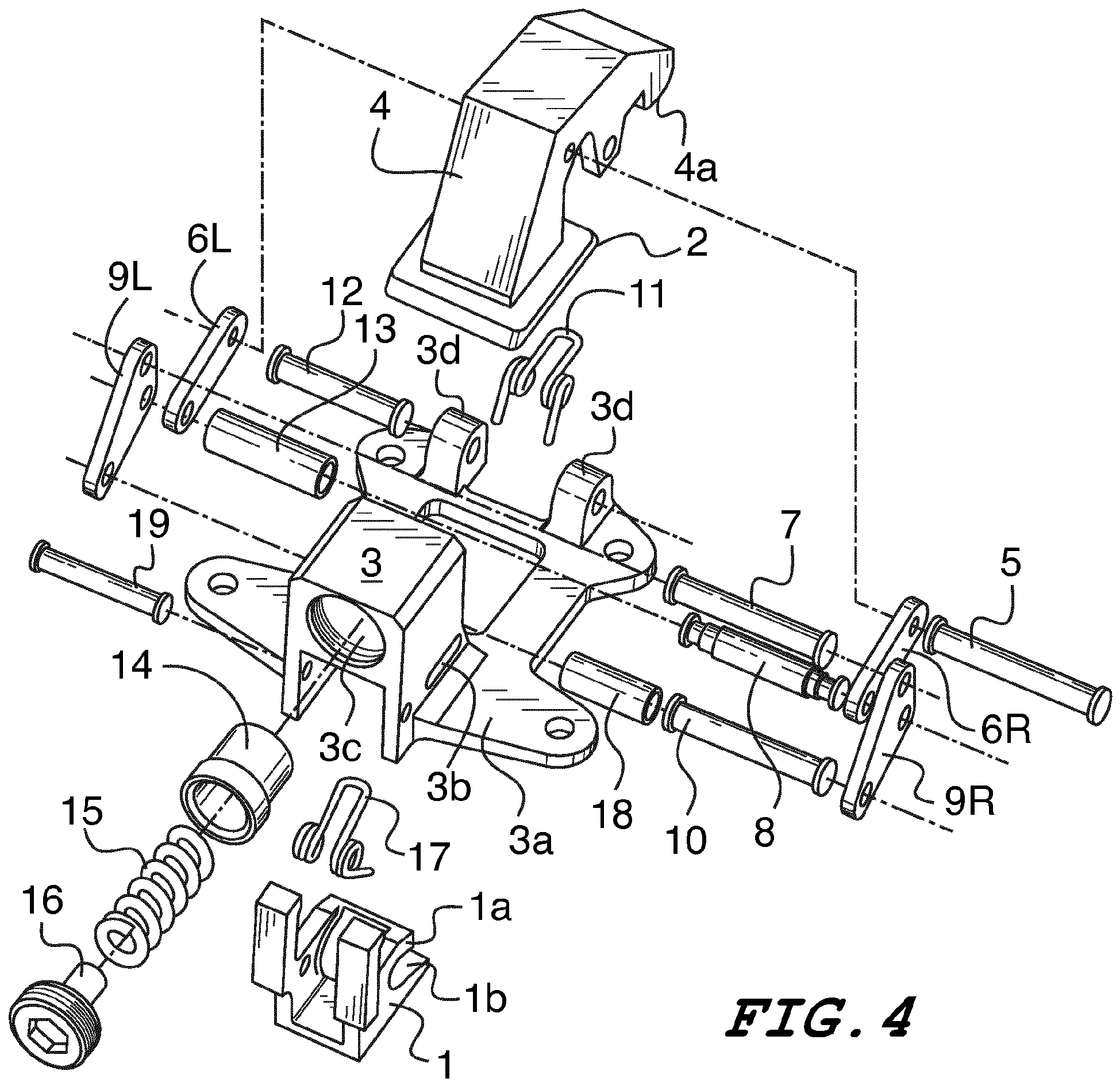 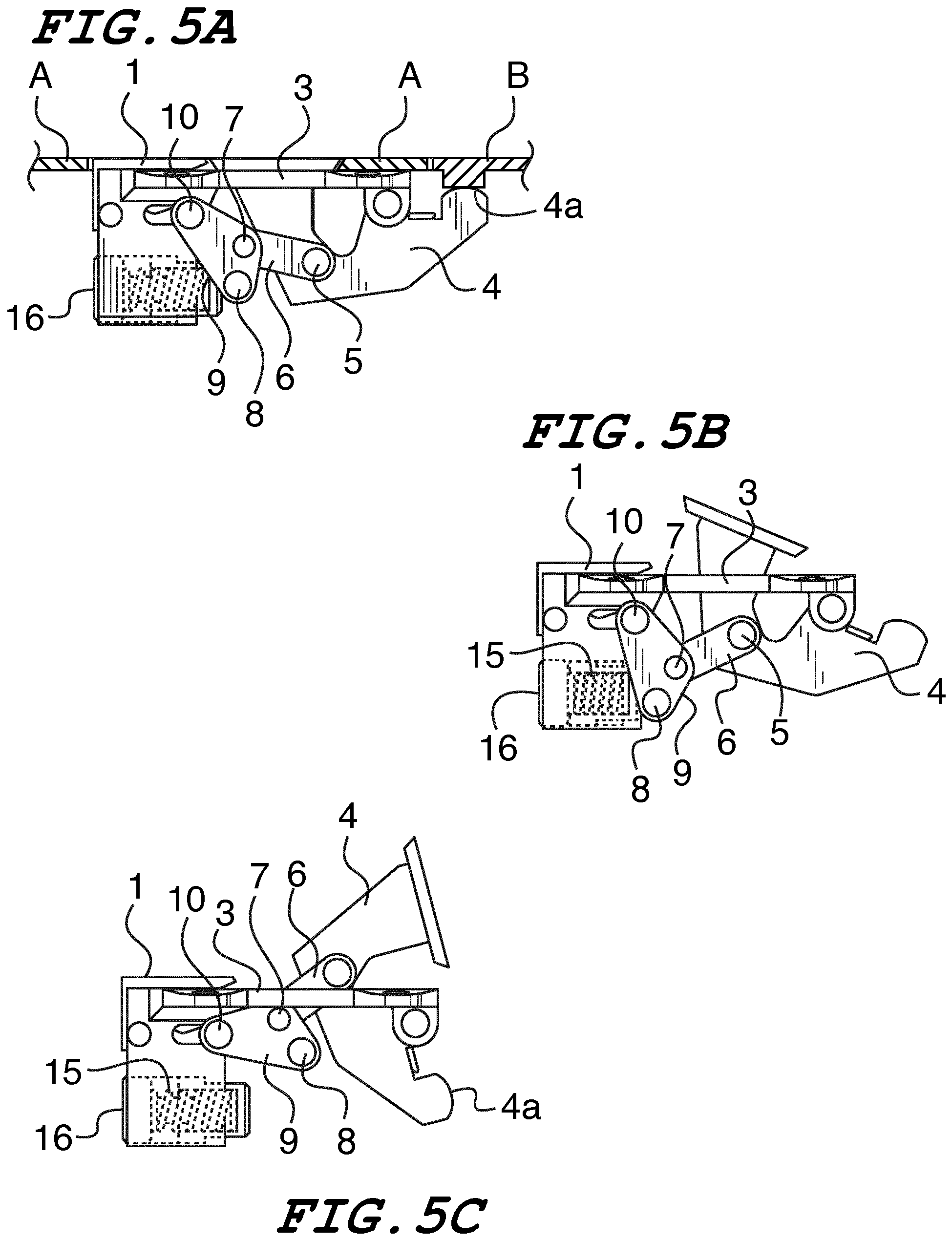 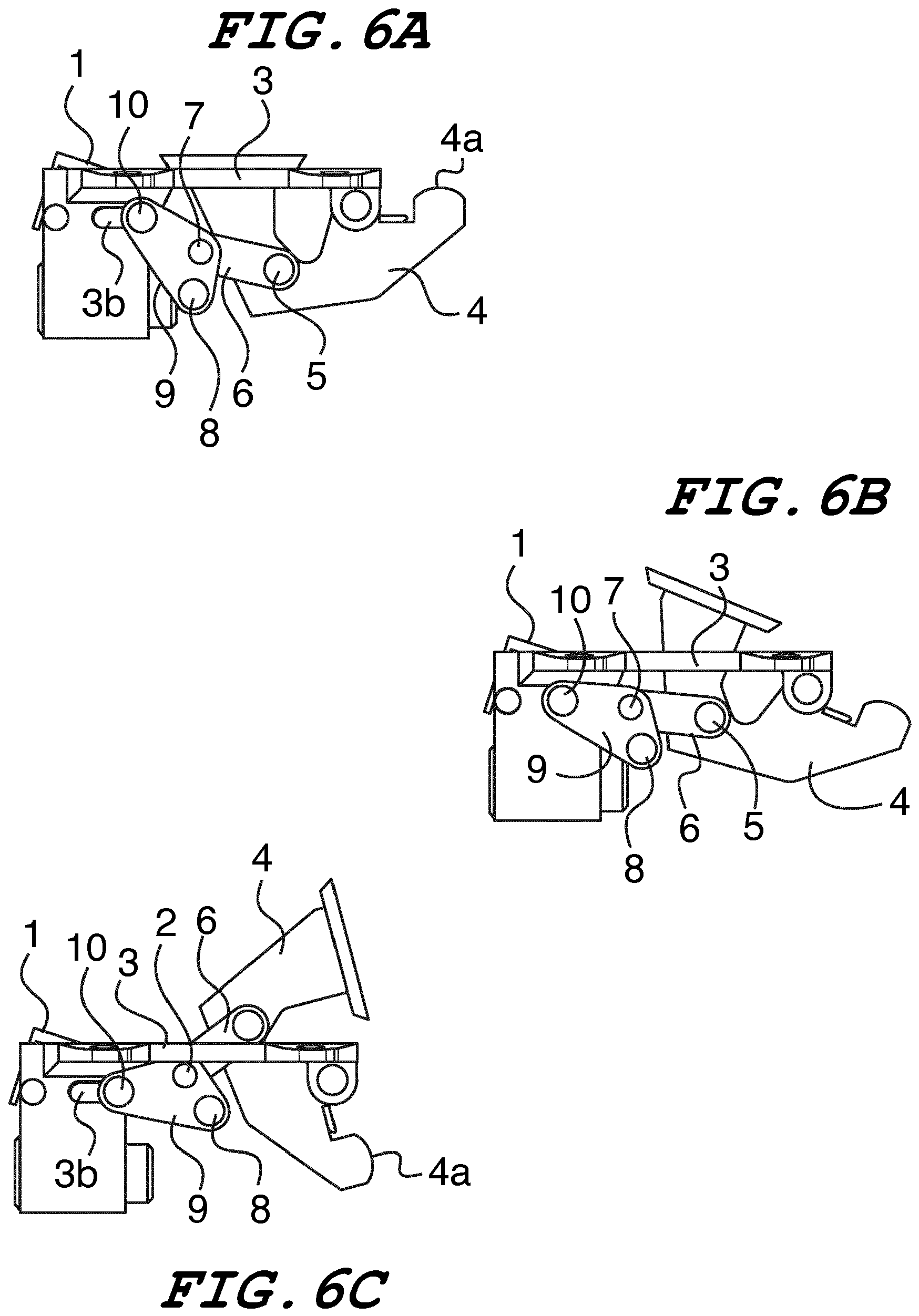 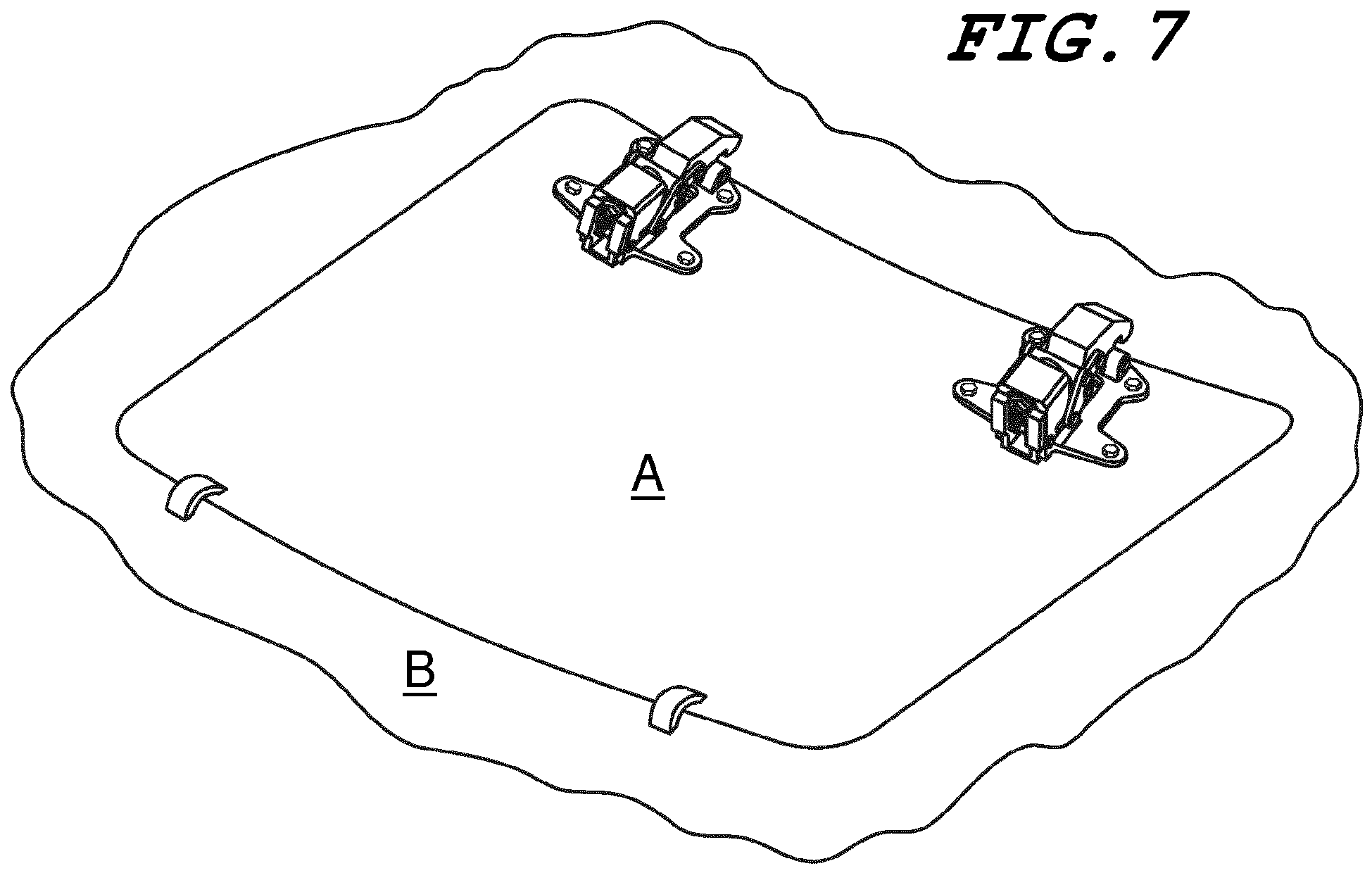