[0001] The invention relates to a device for fatigue bending tests, particularly for analysing and monitoring the impact of structural keys on the carrying capacity and lifetime of workpieces.

[0002] Existing devices for bending fatigue tests, used to analyse and monitor the impact of structural keys on the carrying capacity and lifetime of workpieces, comprise a drive shaft and a support bearing. A weight is suspended or load force is applied in the centre of the test bar, resulting in alternating bending when rotating the bar. No other type of the test device is known.
[0003] A disadvantage of this device is the maximum load in the centre of the test bar where the load is deployed. For keyed test bars, the maximum load is applied on the key and there is a problem with deploying the weight without affecting the site of the key. The key can be placed outside the weight area, but it is necessary to recalculate the load on the site of the key and objectivity of the test is questionable.
[0004] The structure of the device is rather simple; it concerns the lodging of the test bar in a bearing on one side and in the clamping section of the drive on the other side. A change of the load is discharged as a change of the weight suspended on the bearing, placed in the centre of the bar. Structurally, it is necessary to fix the position of the bearing with the weight. The test does not conform to the actual load of the real component; it has comparable results to those of the S-N curve and the determination of the fatigue limit. The test is not suitable for keyed components. When using the device, the weight and the central mounting shall be secured in case of bending of the test bar so as to prevent injury or damage to the device. The load is therefore discharged hydraulically and is therefore more complicated. Then, however, if the bar bursts, the loading pull is interrupted.
[0005] Current devices use either bending of the test bar by turning the clamping heads during their rotation or loading of the test bar by means of weight in the centre of the sample, in two points. The above-mentioned devices are manufactured abroad.
[0006] The former device concerns a specifically loaded test sample; bar deformation is caused by turning the clamping heads of the sample during their rotation. The turning is created by a mechanism at several different angles. The simplicity of the test, including the clamping of the test sample, is an advantage. A specific load that does not correspond with the real bending while the machine components are rotating is a disadvantage. The device cannot be used to analyse keyed samples.
[0007] The other device type models typical fatigue test cases of bending during rotation. It is a fairly complex device with the advantage of a wide range of loads. Despite the feasibility of bending tests during rotation, once again this device is not suitable for analysis and fatigue tests of keyed components. The load would have to be applied at the key, thereby distorting the test results. In this case, it would have to be spot load, which the device is incapable of implementing.
[0008] The inventor certificate SU-657320 discloses a prior art fatigue bending test for a pipe with one fixed end and the other end loaded by a rotating mechanism of two eccentrics. The bending moment is registered by strain gauges at the support of the fixed end, while liquid in the pipe is pressurized.

[0009] The deficiencies mentioned above are, to a large extent, eliminated by a device for fatigue bending tests based on this technical solution. Its essence is that it comprises a bed with an electric motor, with a drive shaft provided with an eccentric flange and a clamping tip for clamping the test bar, where a cage with a chuck is installed at the clamping tip for clamping the test bar and a three-axis force sensor is installed to monitor the load on both load axes of movement.
[0010] Advantageously, the flanges have a different eccentricity, from 0.5 to 5mm. The electric motor is advantageously provided with stepless speed control.
[0011] The test bar can be keyed for fatigue testing of keyed components. The shape and size of the key is not a problem for the test.
[0012] A device for fatigue bending test as specified in this technical solution is used to analyse and monitor the effects of structural keys on the carrying capacity and lifetime of workpieces and to analyse the effects of key manufacture and workmanship quality on the fatigue properties of the material. Sensors monitor the load in both bending axes subject to loading. The flanges are interchangeable, with various sizes of eccentricity, such as 0.5:1:2:3 mm. Electric motor control is stepless and a broad time load of the components can be used. When the test piece is provided with a structural key, it is possible to test the effects of different key designs, different manufacturing technologies on the lifetime of the loaded components. The device can also be used for normal cyclic bending tests.
[0013] The device is more complex compared with the existing types of devices. This is associated, however, with repeatability, wide usage and high correlation to the actual loads of the real components. The price of the device does not differ from that of the existing device too much; the biggest part of the price is attributable to the sensor assembly, including amplifiers, and transfer to computer. The device provides fault-free operation and high safety with a switch that disconnects the drive if the load drops to 10%. The device has a long lifetime, depending mostly on the quality of sensors and the quality of the chuck. The device has a high precision thanks to its rigid structure and quality of sensors. The usability of the device is wider compared to the currently used design - test bars with structural, process keys, keyless, different types of designs with a simple method of manufacture of the test bar - the basic design of the rotating part without other elements.

[0014] The device for fatigue bending tests as specified in this invention will be described in greater detail on a specific embodiment with accompanying drawings, where figure 1 shows schematically the device in plan view and figure 2 shows the device in side view.

Embodiments of the invention

[0019] A device for fatigue bending tests as specified in this invention can be used for analysing and monitoring the effect of structural keys on the carrying capacity and lifetime of workpieces. The device can be used for normal cyclic bending tests of materials, for tests when a material in a structure is replaced to compare its dynamic properties and for determining the effect of material processing on the fatigue properties of the material.

1. A device for fatigue bending tests, comprising a frame (1) with an electric motor with a drive shaft provided with an eccentric flange (2) and a guide bush (4) for clamping the test piece (3), wherein a chuck (10) is installed in the guide bush (4) for clamping the test piece (3), characterized in that the guide bush (4) is placed in a cage (9) and a horizontal strap (7) and a vertical strap (8) are attached to the cage (9); the straps are provided with three-axis force sensors to monitor the load in both load axes of movement with the frame (1) of the device.

4. The device as in any of the above Claims, wherein the cage (9) is coupled to the frame (1) by means of articulated horizontal straps (7) and vertical straps (8).

5. The device as in any of the above Claims, wherein the electric motor is provided with stepless speed control.

6. The device as in any of the above Claims, wherein the test piece (3) in the form of a bar is keyed for the fatigue test of keyed components. 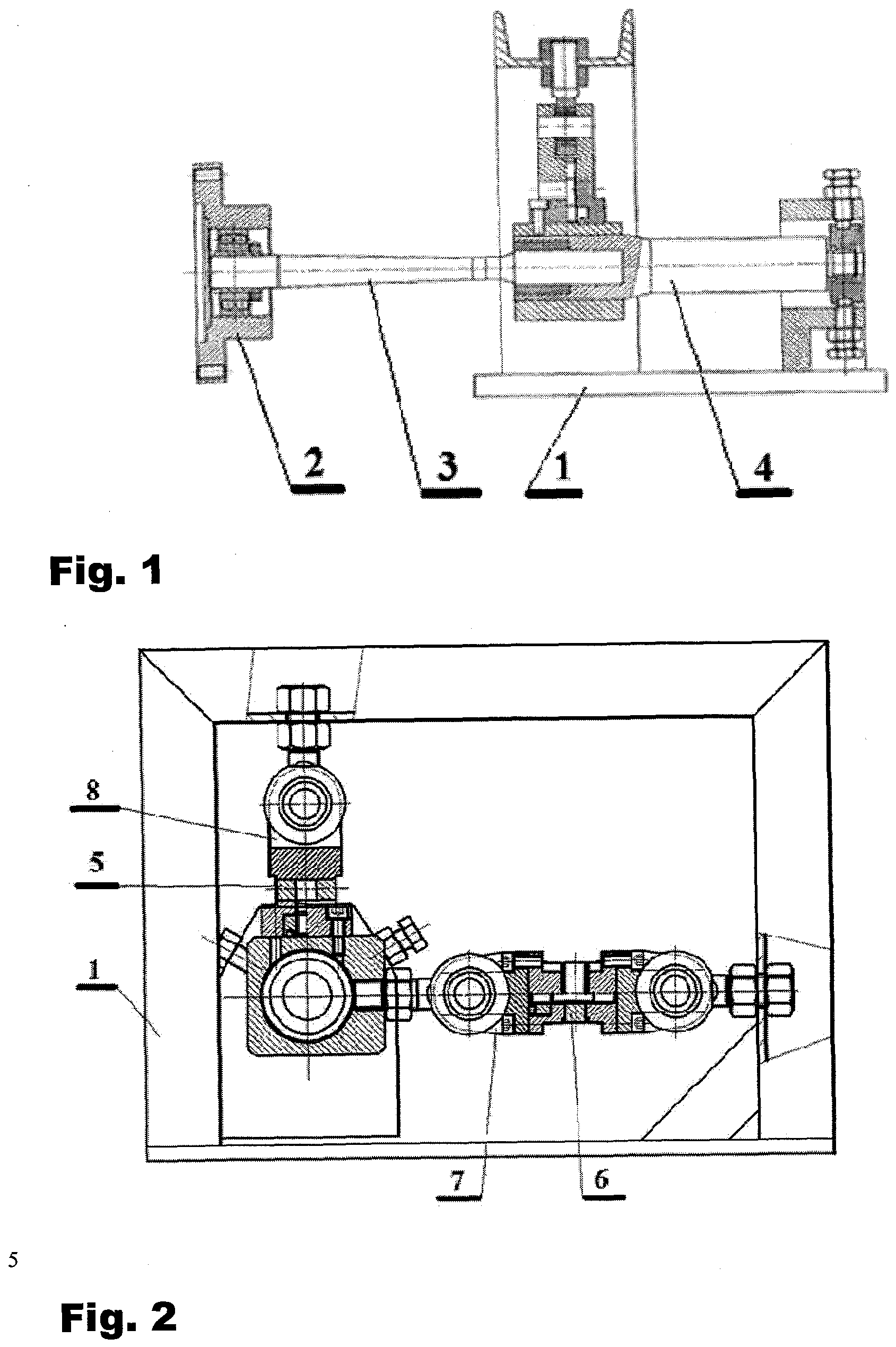