[0001] This machine is a "Tool for Rehabilitation" and is called "SKY WALKER". The machine is designed to be used during any physical trainings based on the ability to hang by the arms for the relaxation and stretching of the joints. It is also designed to carry out corrective exercises for various forms of paramorphisms and to strengthen the upper body muscles. This machine is very useful for those with spinal problems such as scoliosis.
[0002] The "SKY WALKER" can be used in fitness centers, in school gyms, in private and public gyms as well as during physical education classes. The exercises allowed are similar to those practiced by using the traditional "Swedish wall bars" and performed in suspension (with no contact with the ground). The uniqueness and novelty of this machine consist in the fact that the user is automatically suspended through electrically controlled lifting systems, controlled by a micro-computer and some security devices.
[0003] This machine can be used by young or old people, who are physically trained or who sporadically use the product as a result of a particular rehabilitation program.
[0004] The prerequisites for the use of the machine are as follows: The machine, shown in the Figure (TABLE 1), summarily consists of a steel body (frame) (6), a horizontal movable ladder (1), supported by 4 arms, a limit switch bar (4), a touch screen panel located on a side of the machine (7) for the user' controls, a small electrical control panel containing a computer such as a PLC. The movable ladder moves as it is driven by an electric stepper motor (11), while the ascent and descent of the movable ladder are controlled by a linear actuator-type motor. The height of the user is stored on the PLC computer (7) and it must be manually set upon the first use on the touch screen or it can be automatically set based on the following procedure: the user must be placed in upright position under the horizontal movable ladder (1). The user must hold the safety bar (4), perform a step forward and reach the maximum extension of his/her arms upwards. He/she must wait for the confirmation signal for about 3 seconds. Now, the machine computer will store the height of the person and, upon the first start-up, the movable ladder will be placed in standby, as the person is able to hold the rungs of the movable ladder (2) with his/her feet flat on the floor. Now, the user can select two main use options (5).
[0005] The "lift up and down" function (one) allows the user to hang on to the rungs (2) and let him/her rinsing by about 20 cm from the ground. In this function, the rungs are fixed with no movement for the time and cycles chosen on the touch screen panel (7). Therefore, the operator can loosen the weight from the spine and can progressively and smoothly distend and stretch his/her back.
[0006] The "lift and go" function (two) allows the user to hang on to the rungs thanks to his/her hands. In this case, the user must be positioned under the ladder (about halfway), with the bar (4) behind his/her shoulders. As soon as the user will hang the rungs, the movable ladder will rise by 20 cm and immediately after the rungs will rotate approaching the user at a previously set speed, between 0.12 and 0.30 meters per second. The user will have to move in suspension only using his/her hands, moving from one rung to another as if he/she was walking while he/she was hung, advancing on the rungs which in turn will move leaving the bar (4) behind.
[0007] The machine is designed for the use of an electronic key where the data of the user (such as height and weight) and the cycles made, namely the recording of the various stages of training, are stored.
[0008] The SKY WALKER has three control and safety devices:

The first device is a load cell (8), which allows weighing the person. The measured weight makes reference to the computer to start up or stop the machine (min. 45kg and max.120kg). In addition, it has the (ride-on) function that, if hanging with the hands to grip the ladder rung, it detects the presence of the user and the movable ladder starts its rotation (the person is raised off the ground about 20 cm).

If instead the person pulls the grip of his/her hands by the rungs because the workout is completed or he/she is in the resting phase, the load cell detects a loss of weight and then the movable ladder goes down to a such height that the user can have his/her feet on the ground, also stopping any kind of movement; in addition, the weight shown on the display is used in such a manner that the user can view any benefits with weight loss, thanks to the workout of the SKY WALKER.

The second device is the " safety limit switch bar" (4) that can be used in two ways: the first use of the device is when the SKY WALKER machine is used in the "lift and go" function (two), that is, when the movable ladder is in motion; as a limit switch if the user in suspension on his/her arms moves backwards too close to the bar and comes in contact with the bar itself. As soon as the user is in contact with the bar, the movable ladder stops and automatically goes down into a gripping position. The second use of the "safety bar" is to measure the height from the ground to the palm of the user hand, with the arms fully at the top of their maximum extension (gripping height).

The third device of the SKY WALKER is a protection for gripping the rungs. It consists of a bulkhead (20) that separates the lower advancing rungs with the high return ones.

1. The "SKY WALKER" machine uses the load cell system as a safety system. The load cell detects the presence or absence of the person in order to start or stop the machine.
2. A linear actuator connected to an encoder raises and lowers the movable ladder through two lever arms for lifting and 2 arms for ascent and descent.
3. The "SKY WALKER" machine uses a safety arm with an encoder to measure the height of the person with his/her arms raised, and this height is also used to position the movable ladder to the starting position.
4. The safety arm provided with the encoder is used to stop the machine when it is used in the "lift and go" function (two).
5. The movable ladder is provided with a controlled motor to progressively speed up and slow down, thus without having sudden movements and without creating trauma due to the "sudden movements". 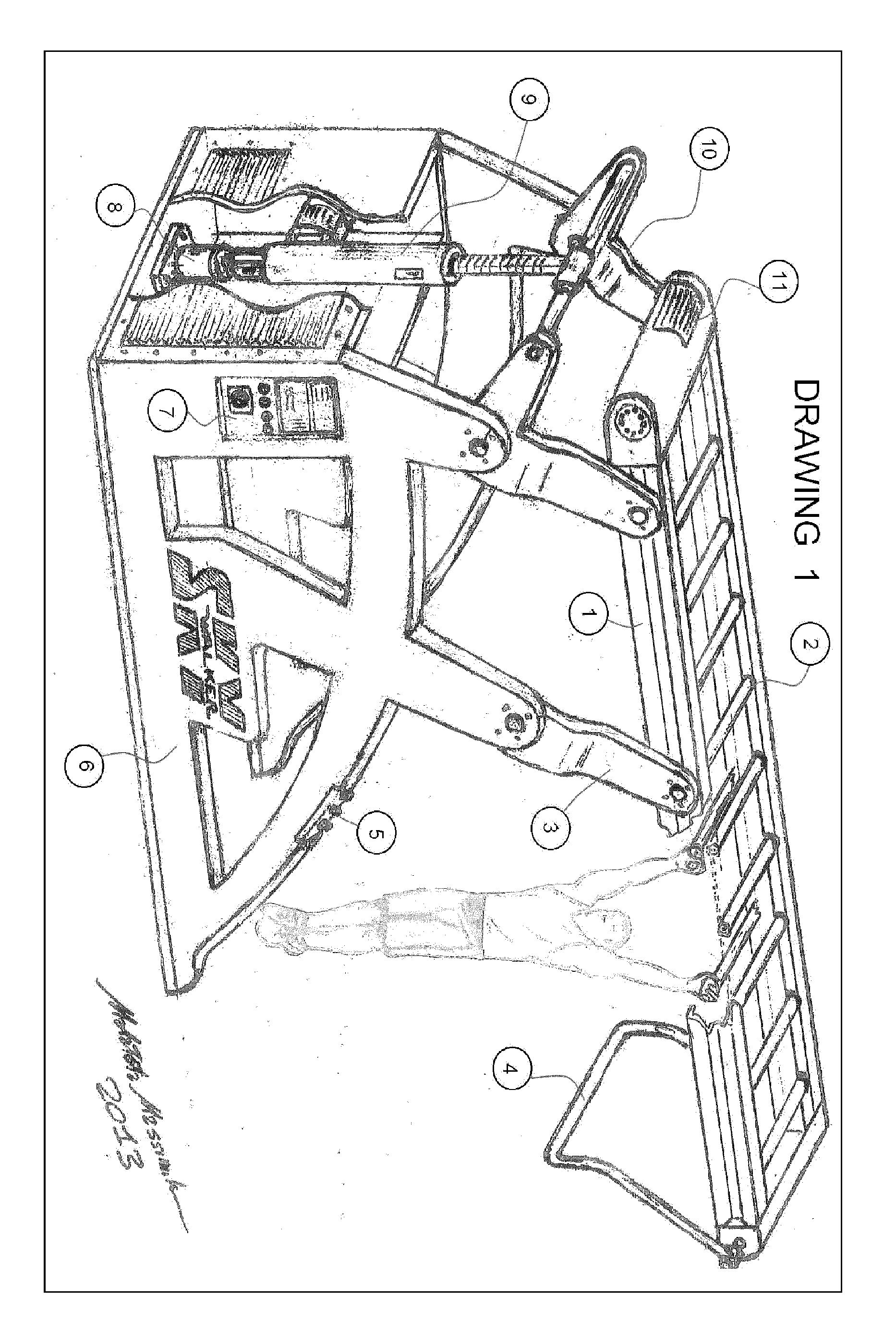 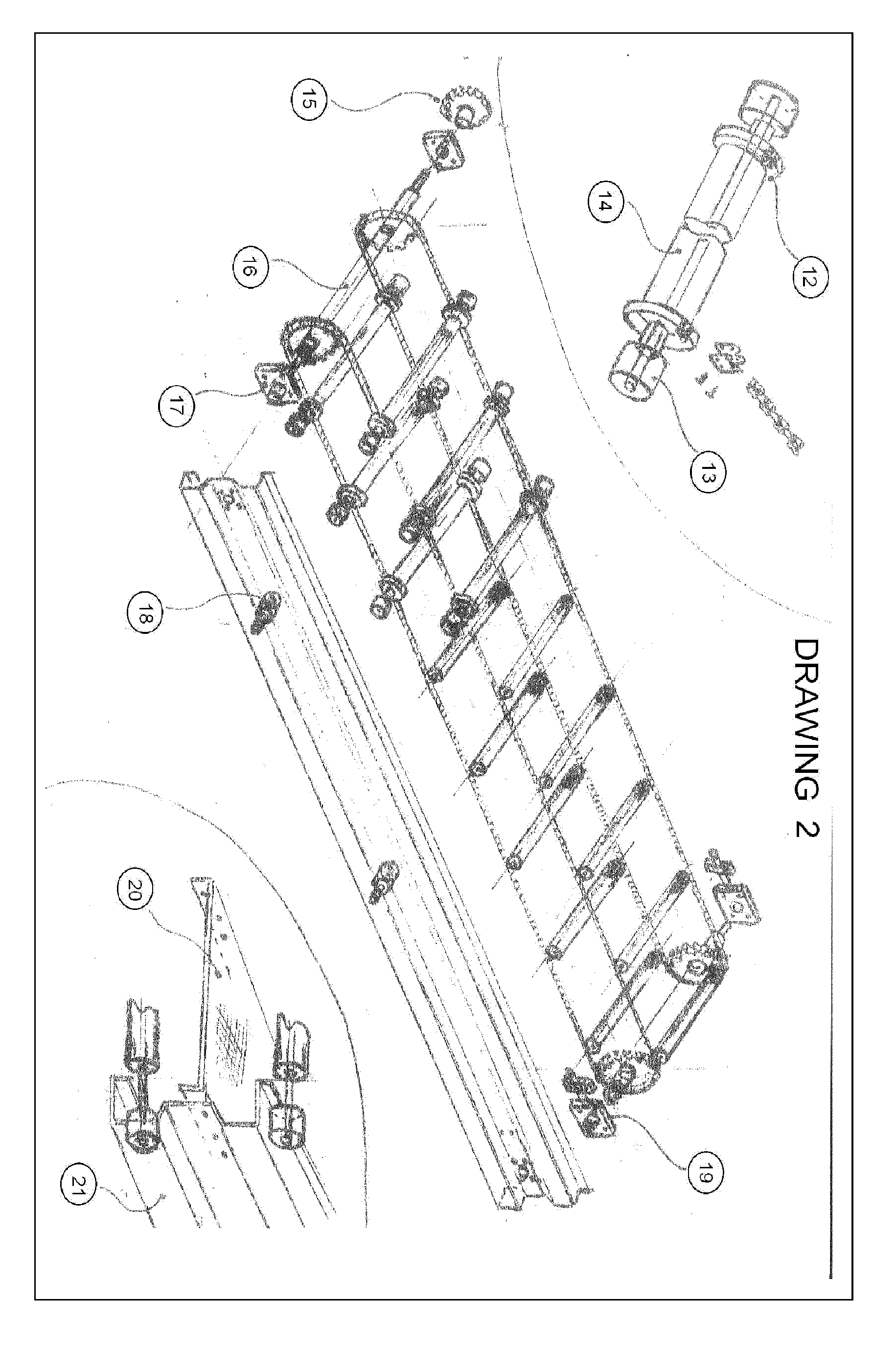 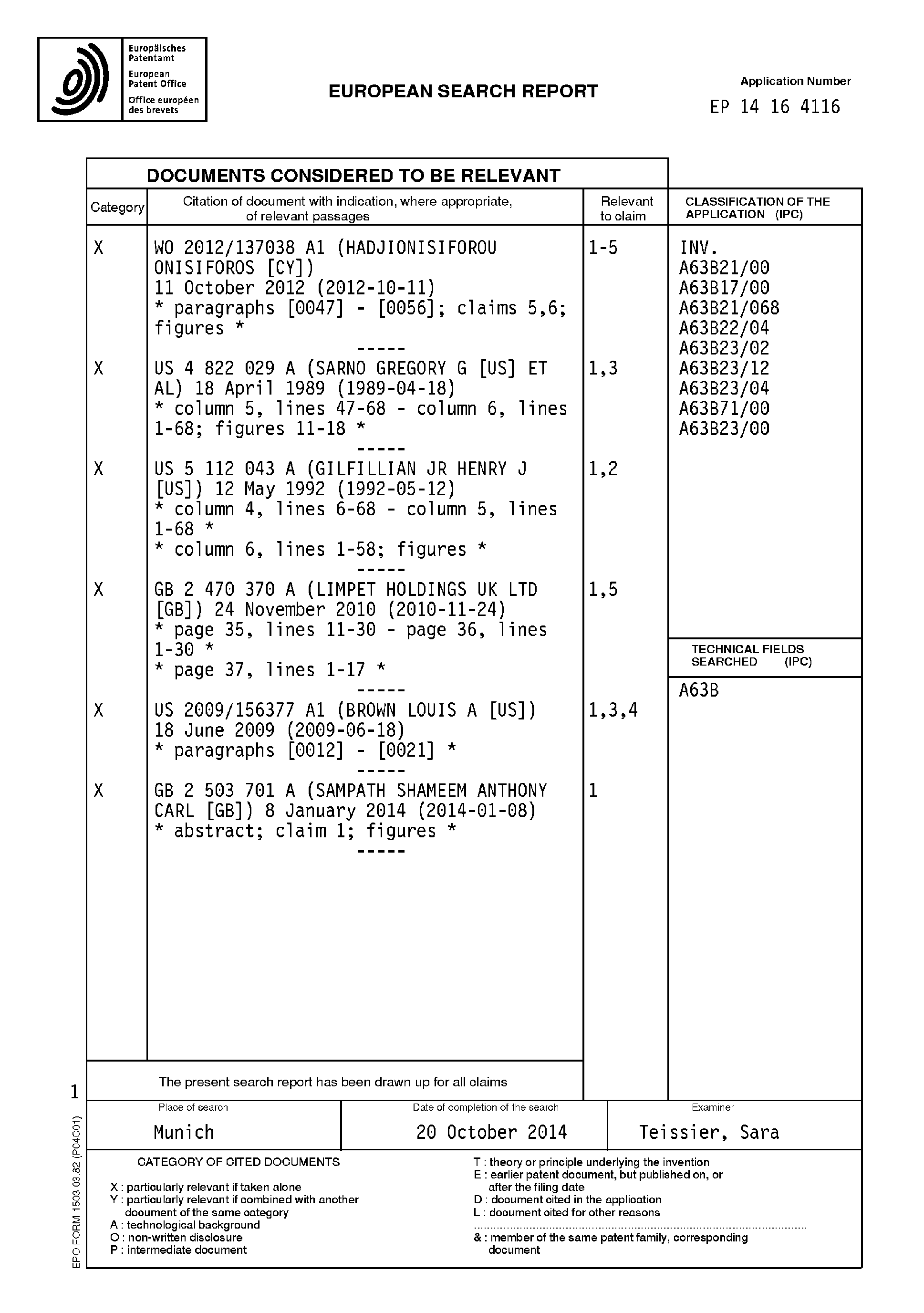 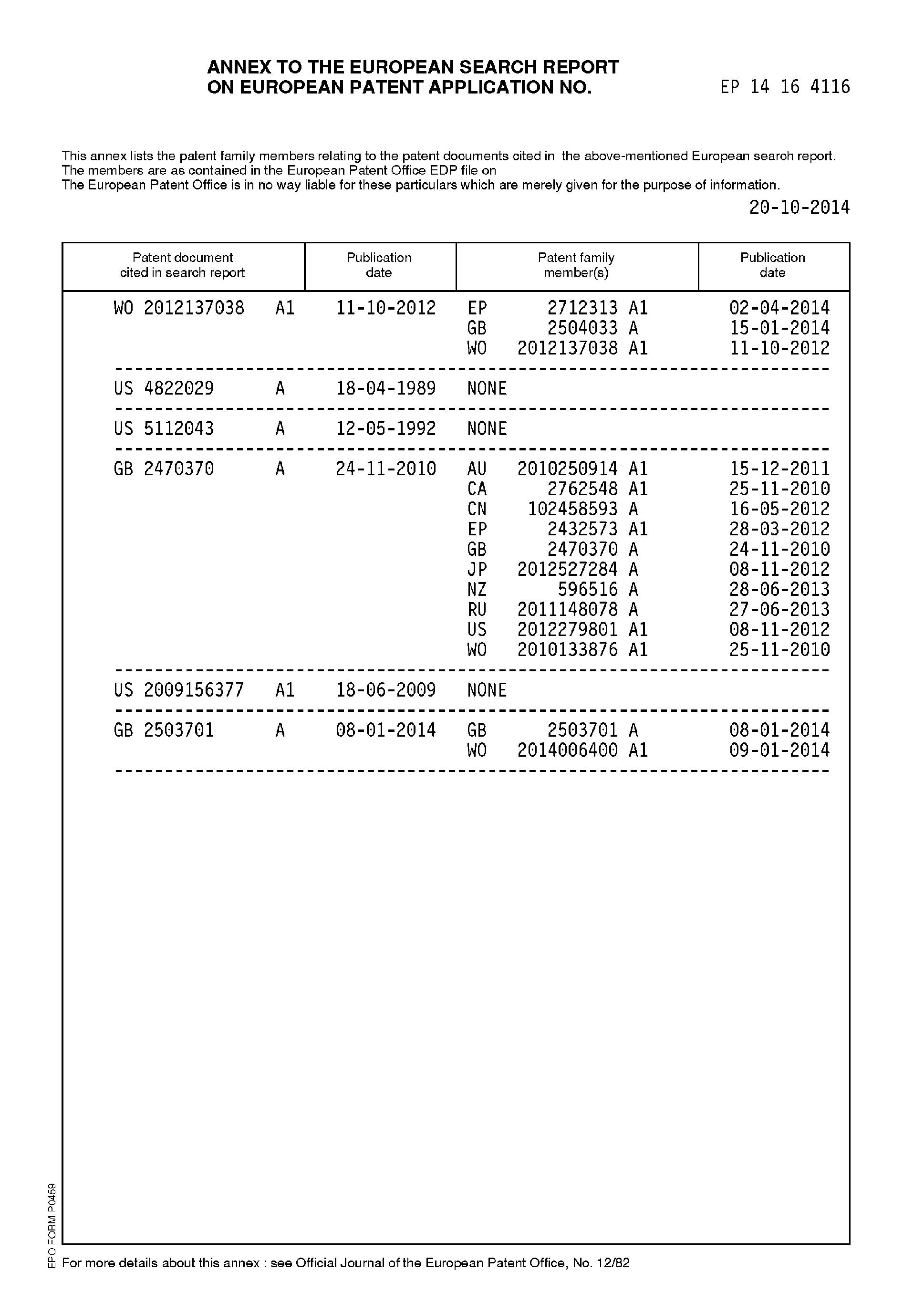