[0001] The present disclosure relates to a method of manufacturing a vane of a gas turbine engine.
[0002] Gas turbine engines generally include a fan section and a core section in which the fan section defines a larger diameter than that of the core section. The fan section and the core section are disposed about a longitudinal axis and are enclosed within an engine nacelle assembly. Combustion gases are discharged from the core section through a core exhaust nozzle while an annular fan bypass flow, disposed radially outward of the primary core exhaust path, is discharged along a fan bypass flow path and through an annular fan exhaust nozzle. A majority of thrust is produced by the fan bypass flow while the remainder is provided by the combustion gases.
[0003] Guide vanes extend between a fan case of the fan section and a core case of the core section guide the fan bypass flow. The guide vanes are attached to the fan case and the compressor case with a multiple of bolts which extend through a structurally capable vane end fitting of each guide vane. As there may be upwards of fifty such vanes, the cumulative weight of the fittings and fasteners may be relatively significant. Furthermore, the vane end fitting interface need provide the desired aerodynamic flow path effect yet needs to endure the pounding of the adjacent rotating fan blades as well as remain resistant to foreign object damage (FOD).
[0004] US 6196794 discloses a vane of a gas turbine engine.

[0005] In accordance with the invention there is provided a method of manufacturing a vane of a gas turbine engine, as set forth in claim 1.
[0006] In an embodiment of the foregoing embodiment, the method includes overmolding the fixture with a thermoplastic sheath.

Figure 1 is a schematic cross-section of a gas turbine engine;

Figure 2 is an expanded view of a vane within a fan bypass flow path of the gas turbine engine;

Figure 3 is an rear perspective view of the gas turbine engine;

Figure 4 is an exploded view of a vane manufactured according to one embodiment; and

Figure 5 is a perspective view of a vane which falls outside the scope of the invention.

2. The method as recited in claim 1, further comprising:
overmolding the fixture (78) with a thermoplastic material to form a sheath (80). 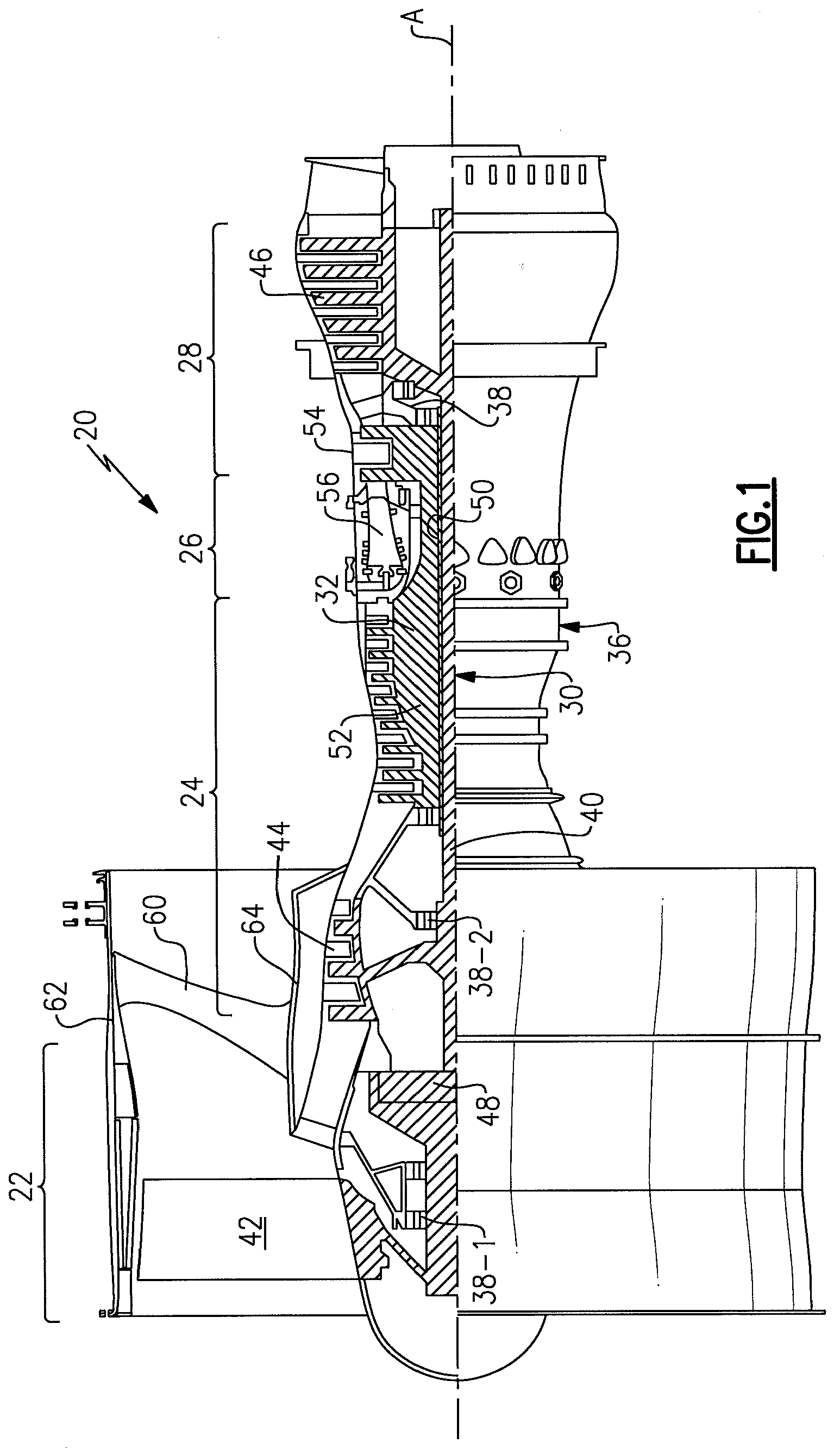 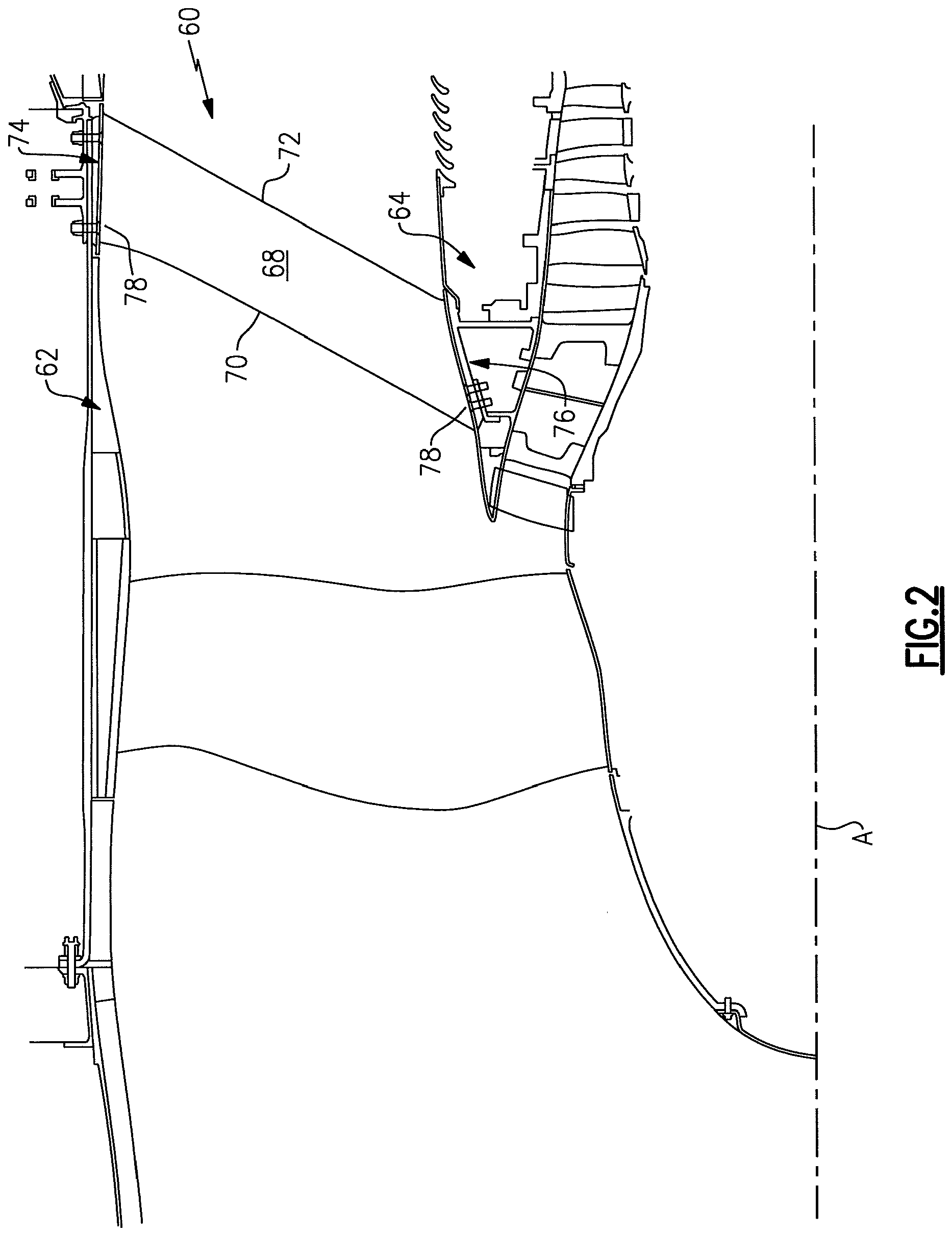 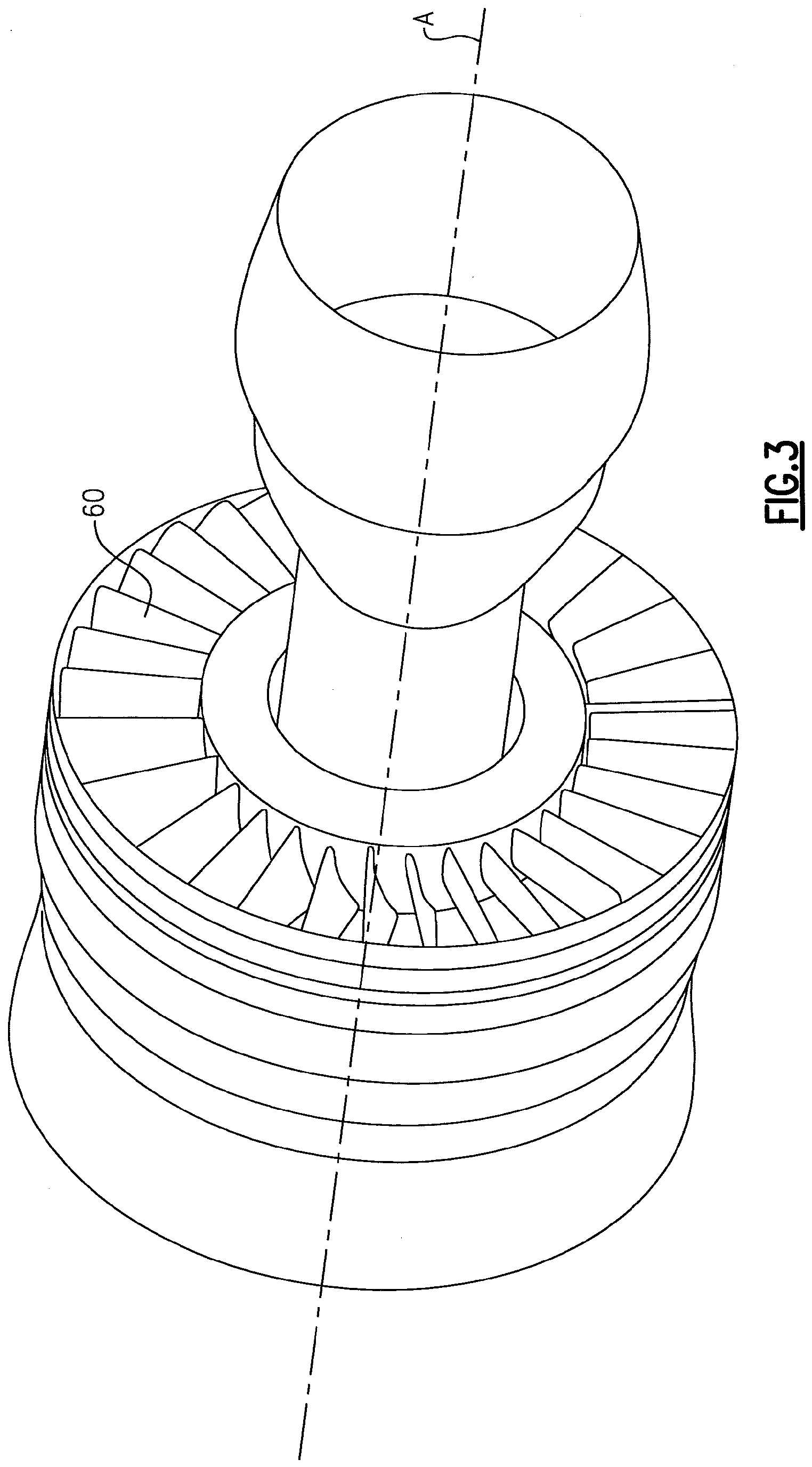 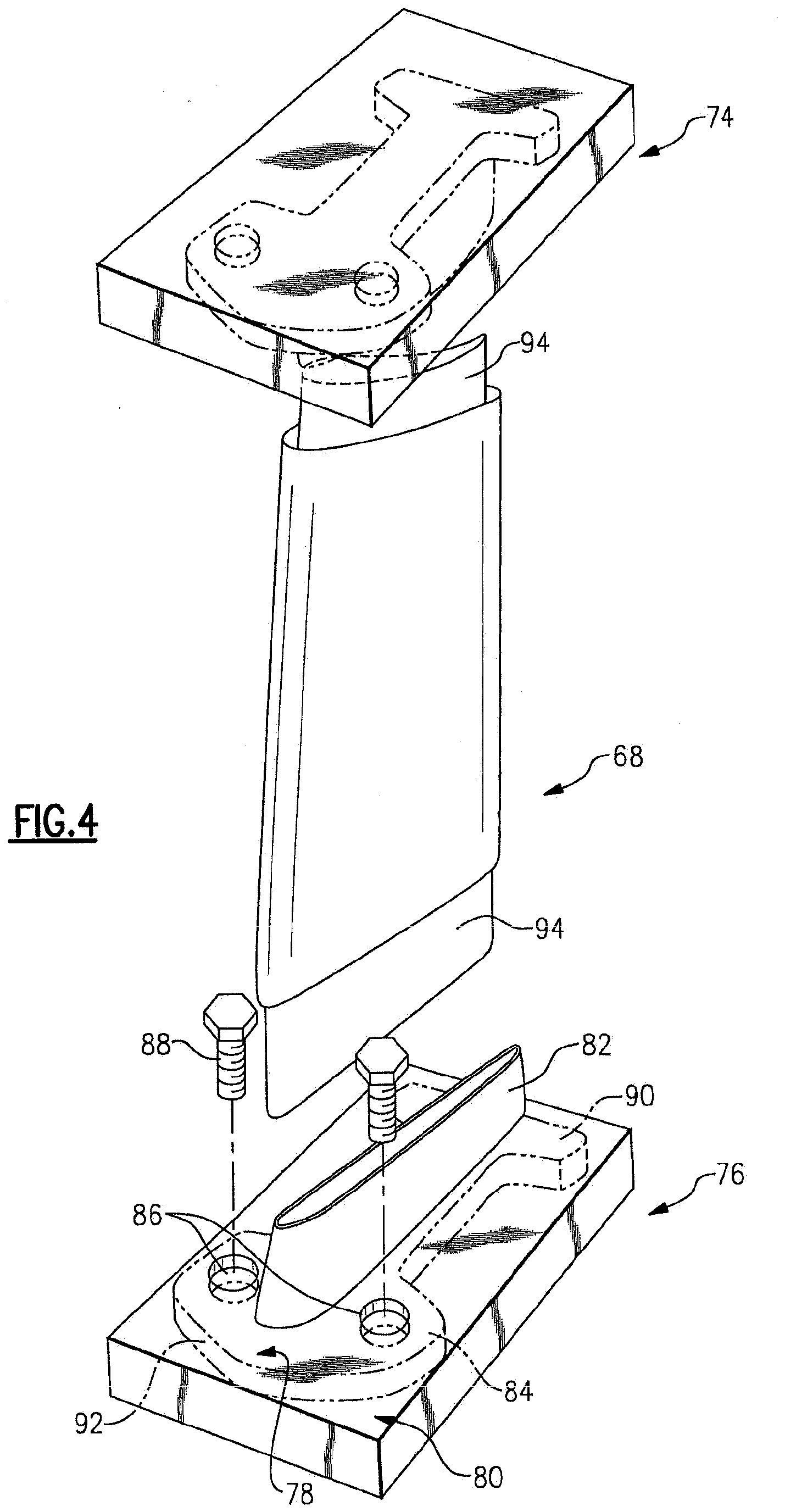 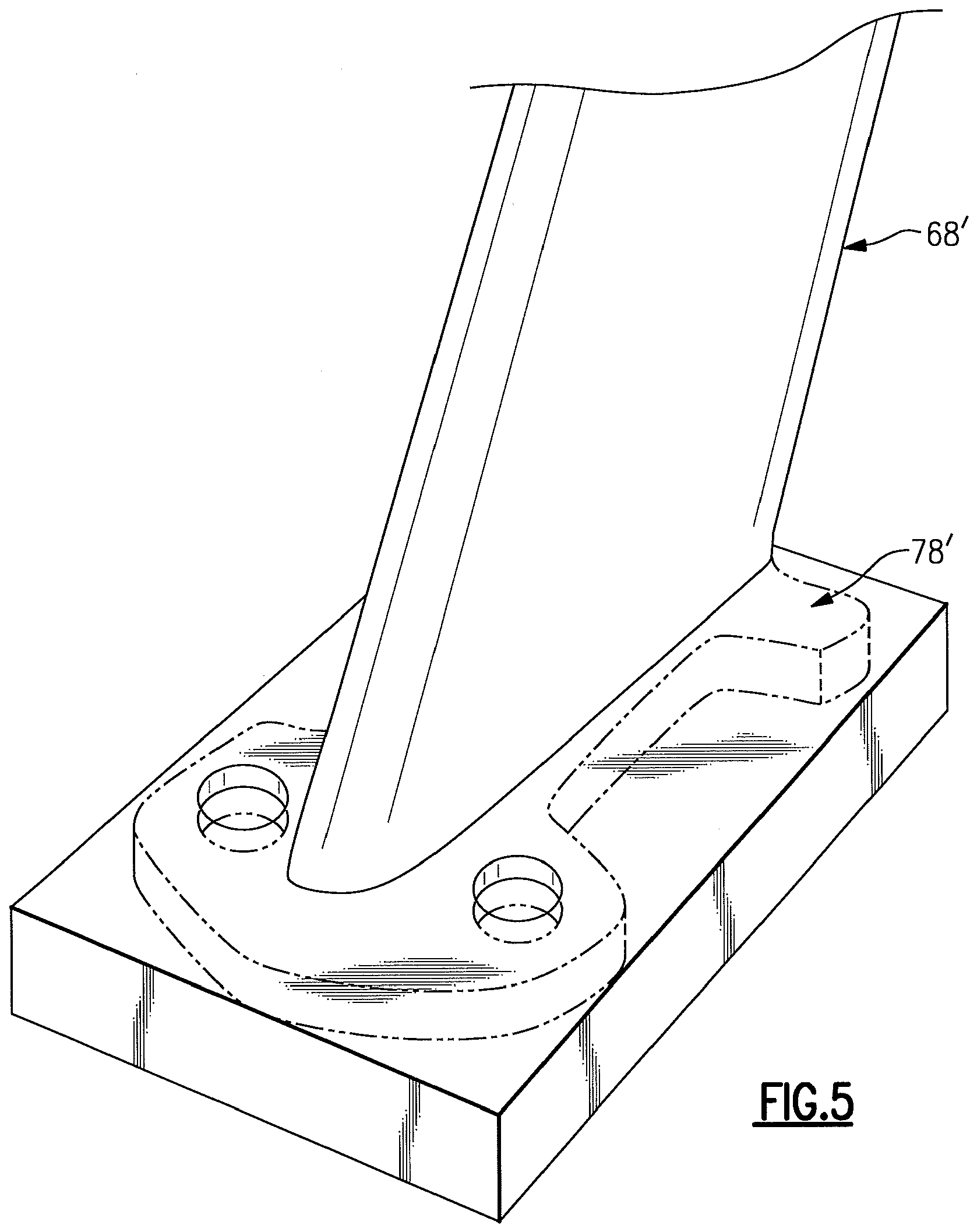