[0001] The invention provides devices and systems for locating the position of an intravascular image within the body.

[0002] Intravascular imaging and endovascular surgery have increased the life expectancy and quality of life for patients suffering from cardiovascular disease. Imaging techniques such as intravascular ultrasound (IVUS), intravascular Doppler, and intravascular optical coherence tomography (OCT) allow radiologists, neurologists, neurosurgeons, cardiologists, vascular surgeons, etc., to directly visualize a patient's vasculature to observe occlusions, thrombi, embolisms, aneurisms, etc. Coupling the imaging techniques with advanced surgical procedures, it is possible to counteract cardiovascular disease by removing thrombi or placing stents in weakened vessels. Using such procedures, a patient at high risk for cardiac arrest can have the risk lessened, and experience a better quality of life after treatment. Furthermore, because intravascular imaging and endovascular surgery are less invasive than techniques such as coronary bypass, the risk of surgical complication is greatly reduced and hospital stays and recovery times are shortened.
[0003] While the procedures are non-invasive, the substantial distance between the entry into the body and the targeted tissue makes the procedures complex. Vascular access for an imaging catheter is gained through an arterial entry point such as the radial, brachial, or femoral artery. From the entry point, a provider can access the vasculature of most important organs (heart, lungs, kidneys, brain) by guiding the catheter along a placed guide wire to a feature of interest. Because there is some amount of travel between the entry point and the target, an additional imaging technique, such as angiography, is needed to determine the approximate position of the guide wire and/or catheter within the body.
[0004] Because the two imaging systems (intravascular imaging and angiography) are operated independently, it can be difficult to precisely locate imaged intravascular tissues within the body. A cardiologist will typically place a guide wire in the vasculature while observing the angiogram, moving the guide wire so that the distal end of the guide wire is approximately adjacent to a feature of interest. Once the guide wire is placed, the cardiologist will deliver the imaging catheter by pushing the catheter to a stop at the distal end of the guide wire. Logically, the subsequent tissue images, e.g., IVUS images, must be approximately located at the distal end of the guide wire, which was visualized previously using the angiogram. In some cases, when the location of the image is unclear, additional contrast and x-ray imaging are used to locate the catheter, which shows up in the angiogram as a pattern of shadows.
[0005] In many cases, the exact location of a tissue image within a body is not known, however, because the imaging plane of the image collector (e.g., ultrasound collector) is not well defined with respect to the distal end of the guide wire. This problem is especially acute when using advanced pullback imaging catheters that can be move longitudinally within the catheter once deployed. Because the image collector is very small, the shadow of the guide wire can make it difficult to locate the precise position of the image collector within the sensor package during translation. Furthermore, if a feature of concern is found while translating the image collector, it can be difficult to pinpoint the location of the feature without stopping the translation and adding additional contrast and x-rays. Unfortunately, angiography presents risks to both the patient and the provider. Angiography uses radiopaque contrast agents and x-ray imaging, e.g., fluoroscopy, to image the vasculature. Because the images are taken in real time, substantially greater amounts of x-ray radiation are required as compared to a radiograph (x-ray picture). In addition to the x-ray exposure, patients may suffer side effects from the radiopaque contrast agents, including pain, adverse drug interactions, and renal failure. For technicians and physicians, there are also risks of x-ray exposure as well as orthopedic injuries (e.g., lower back strain) due to the extra weight of the lead-lined aprons and other protective equipment.
[0006] WO 97/28743 A1 describes to obtain accurate three-dimensional reconstruction of a body vessel. The method employs X-ray angiography (ANG) in combination with intravascular ultrasound (IVUS) to overcome limitations existing in present three-dimensional reconstruction techniques using a method termed ANGUS. The IVUS data represent a cylindrical stack of cross sections. A 3D path of the catheter axis is reconstructed from two X-ray images, after which the stack of IVUS contours is wrapped around this 3D catheter centerline. In order to establish the correct rotational position of the stack around the centerline, use is made of "landmarks" or catheter features which are visible in angiograms, as well as in a simulation of these angiograms derived from the reconstructed 3-D contour. US 2012/004537 A1 describes an apparatus and methods for use with an endoluminal data-acquisition device configured to be moved through a lumen, the device having a radiopaque marker coupled thereto. While the device is being moved through the lumen, (a) endoluminal data points of the lumen are acquired using the device, (b) contrast agent is continuously injected into the lumen, and (c) angiographic images of the device are acquired. It is determined that endoluminal data points correspond to respective locations within the lumen, by determining locations of the radiopaque marker within the angiographic images of the lumen, by performing image processing on the angiographic images, the locations of the radiopaque marker within the angiographic images of the lumen corresponding to respective endoluminal data points.
[0007] Thus, there is a need for improved methods of locating an image produced by an image catheter during a procedure. Any improvement that decreases the time of a procedure using angiography will benefit both doctor and patient.

FIG. 1A shows a catheter for taking intravascular images having a radiopaque label co-located with the image collector;

FIG. 1B shows the detail of the collector assembly, including a radiopaque label co-located with the image collector;

FIG. 2 depicts an optical coherence tomography (OCT) imaging engine and patient interface module (PIM) having an imaging catheter including a marker co-located with an imaging element. The OCT system may include additional markers to show, e.g., the location of the pullback shaft or the location of the distal tip of the catheter;

FIG. 5 is a simultaneous display of an intravascular ultrasound (IVUS) image and an angiogram of the artery from which the IVUS image originated;

FIG. 6 is an alternative simultaneous display of an IVUS image and an angiogram of the artery from which the IVUS image originated;

FIG. 7 is a simultaneous display of an optical coherence tomography (OCT) image and an angiogram of the artery from which the OCT image originated;

FIG. 8 is a flowchart of a system of the invention;

FIG. 9 is block diagram of a system of the invention for locating the position of an intravascular image relative to an image of the vasculature of the subject;

FIG. 10 is a block diagram of a networked system for locating the position of an intravascular image relative to an image of the vasculature of the subject.

[0014] Using the image collectors with radiopaque labels and the systems and method described herein, physicians and other users of intravascular imaging will be able to precisely locate the position of a given intravascular image within the vasculature. The inventions will speed intravascular imaging procedures, and result in less contrast and x-ray exposure for patients. The inventions will also make it easier for users to locate tissues of interest, e.g., thrombi, for accompanying endovascular procedures.
[0015] Any targeted tissue can be imaged using systems of the invention. In certain embodiments, systems of the invention image within a lumen of a subject. Various lumen of biological structures may be imaged including, but not limited to, blood vessels, vasculature of the lymphatic and nervous systems, various structures of the gastrointestinal tract including lumen of the small intestine, large intestine, stomach, esophagus, colon, pancreatic duct, bile duct, hepatic duct, lumen of the reproductive tract including the vas deferens, uterus and fallopian tubes, structures of the urinary tract including urinary collecting ducts, renal tubules, ureter, and bladder, and structures of the head and neck and pulmonary system including sinuses, parotid, trachea, bronchi, and lungs.
[0016] Any vascular imaging system may be used with the devices and systems of the invention including, for example, ultrasound (IVUS), Doppler, and optical coherence tomography (OCT). Devices and systems using the invention can also be used for intravascular visible imaging by co-locating a radiopaque label with a visible image collector, such as with an optical fiber or a CCD array camera. By co-locating a radiopaque label with the image collector, it is possible to track the location of the image collector, and thus, the image plane of the measurement. The radiopaque label will typically be quite small (1-5 mm) and constructed from a metal that does not transmit medical x-rays, such as platinum, palladium, rhenium, tungsten, tantalum, or combinations thereof.

the imaging catheter of claim 1, operatively coupled to the processor and capable of collecting imaging data of vasculature of the subject; and

a computer readable storage medium having instructions that when executed cause the processor to:

receive imaging data of vasculature of a subject collected with the image collector co-located with the radiopaque marker;

receive an image of the subject including the radiopaque marker;

an image of the subject showing the location of the image collector; and

output an image of the vasculature of a subject. 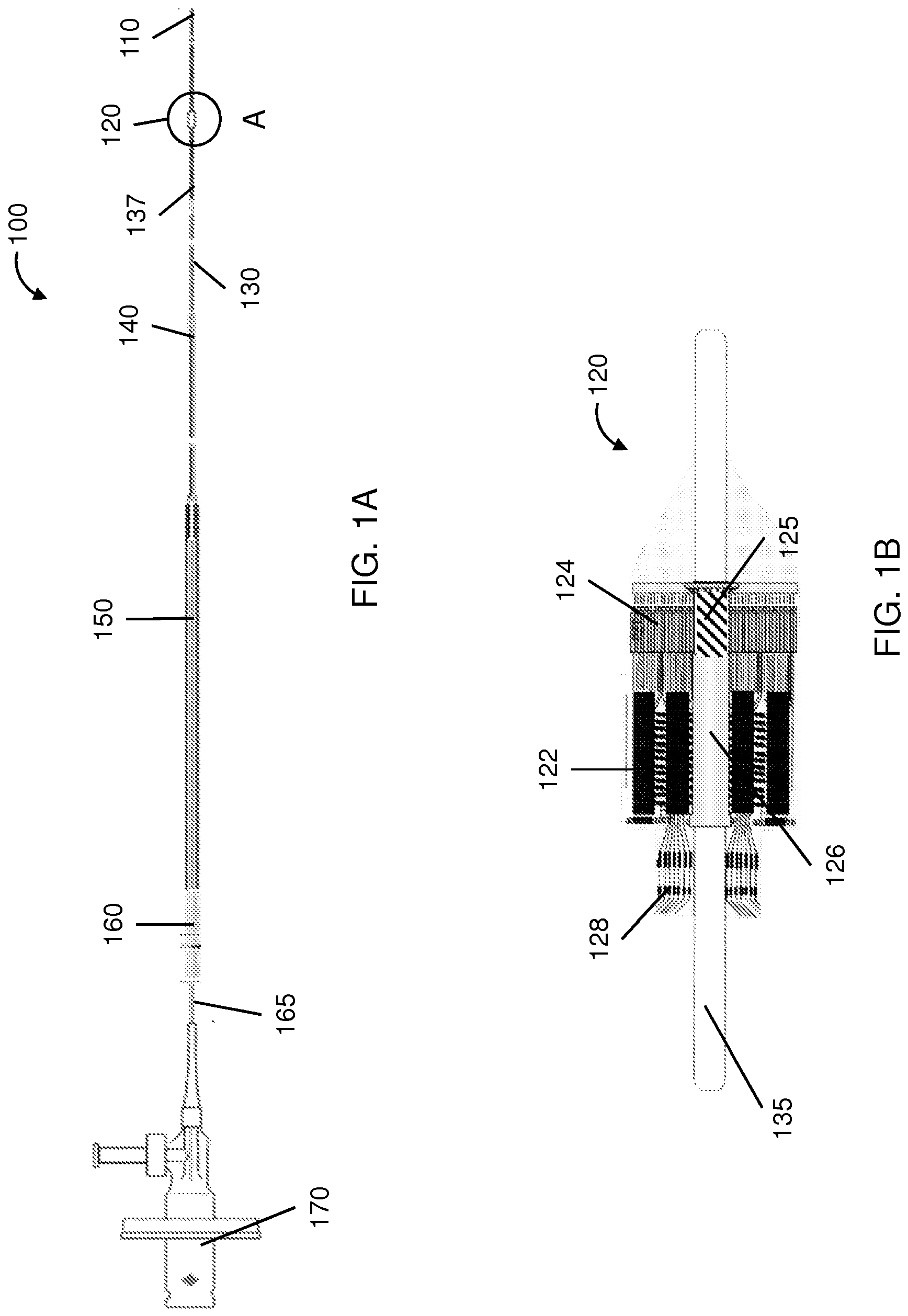 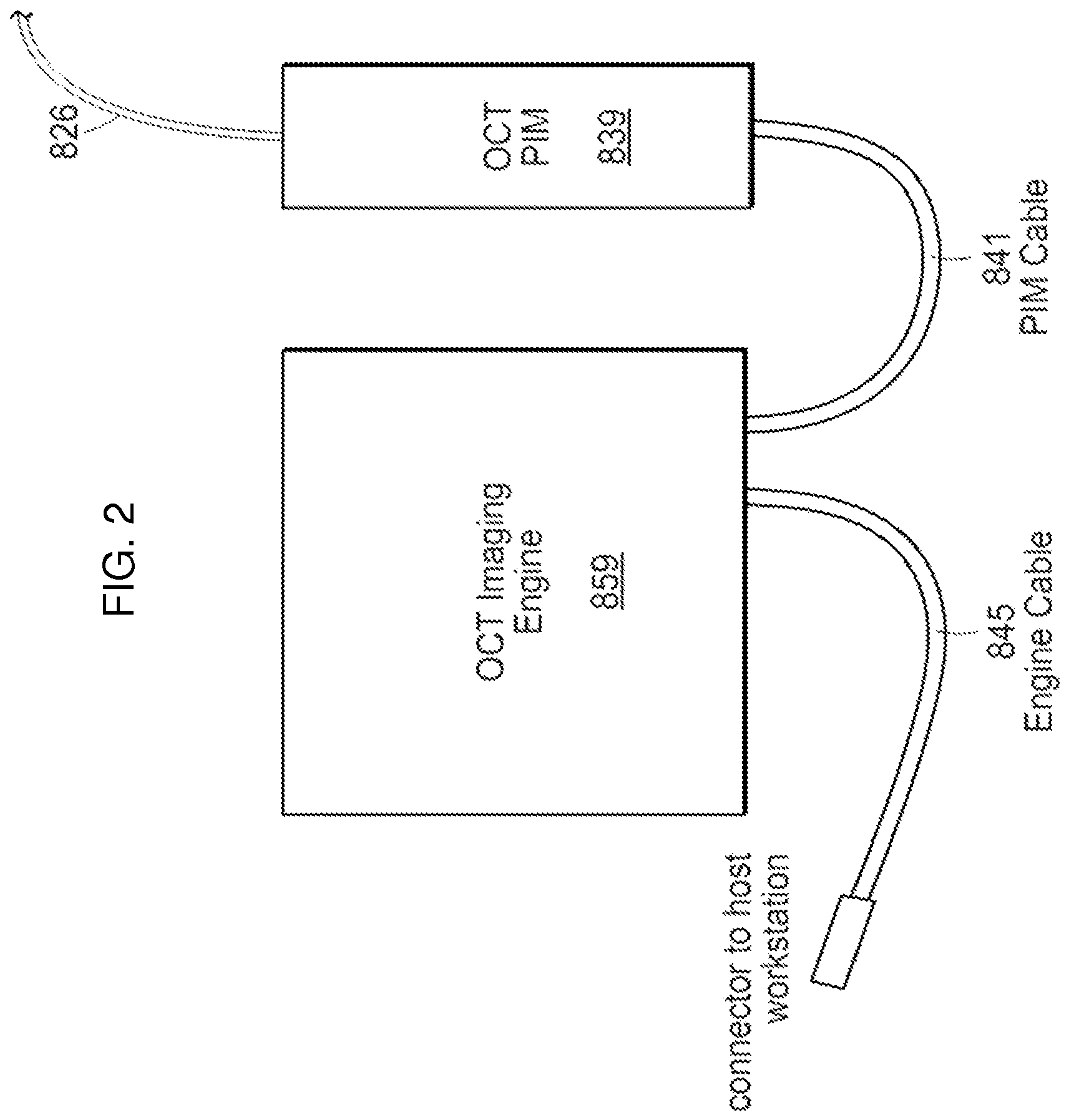 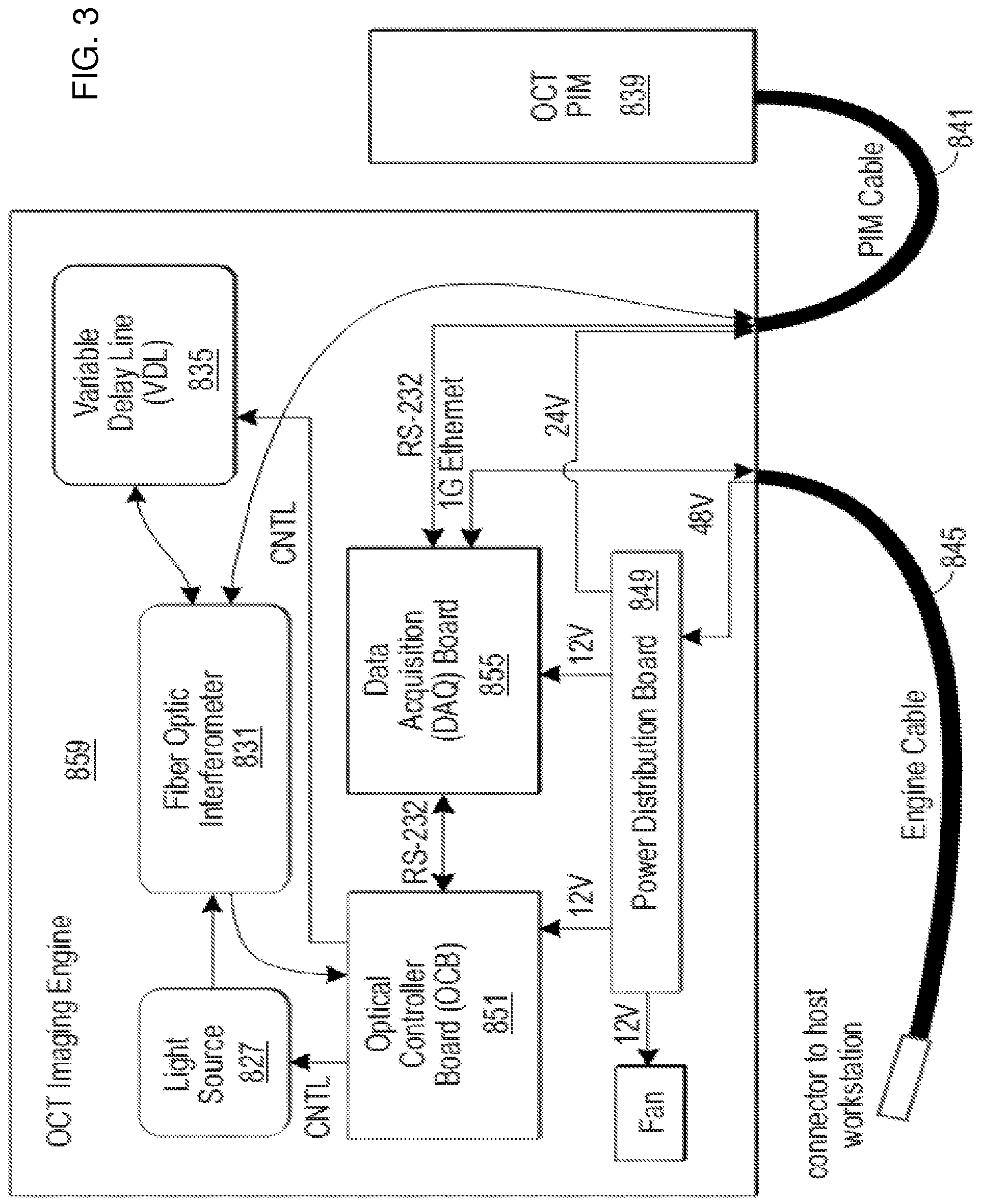 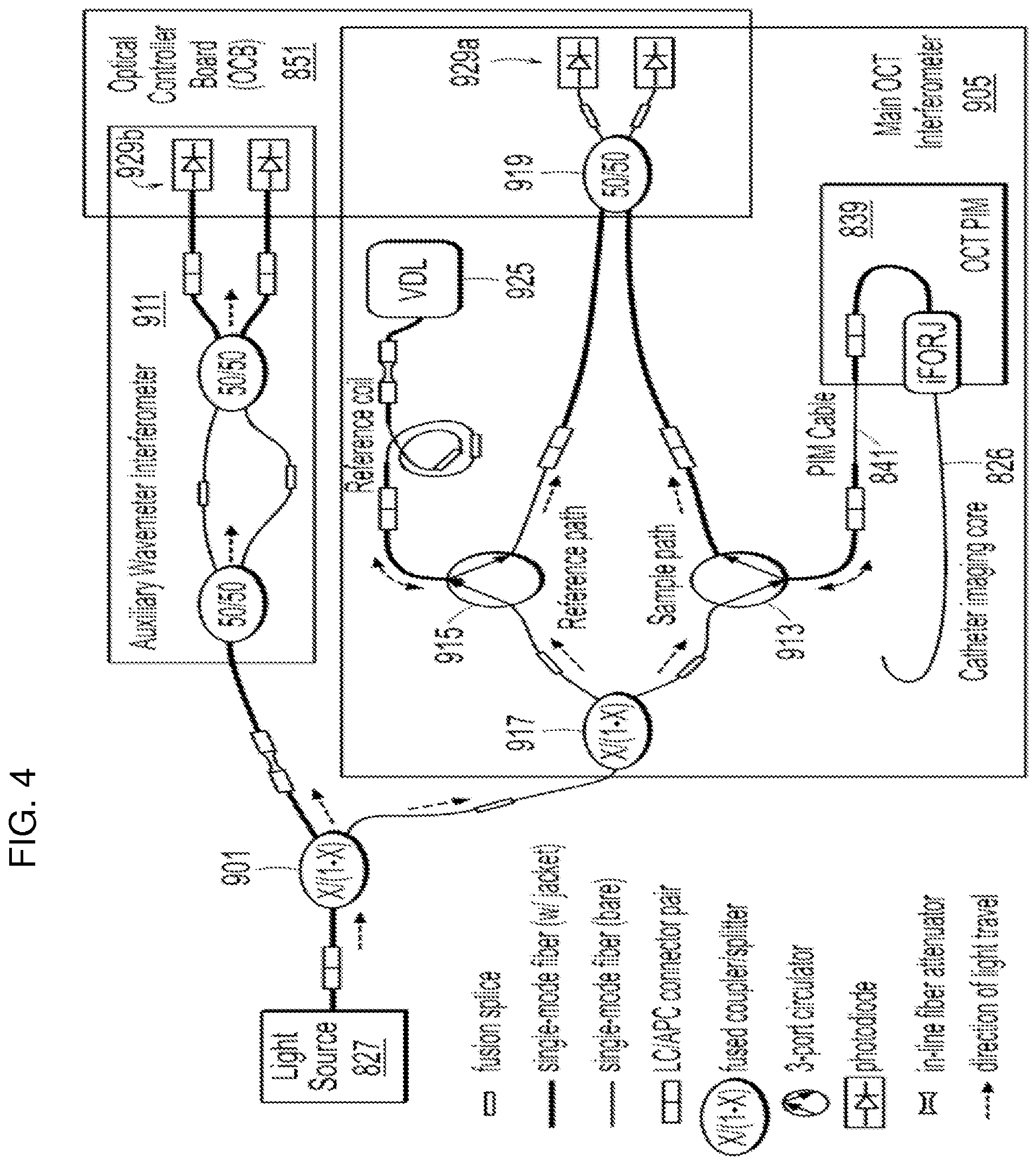 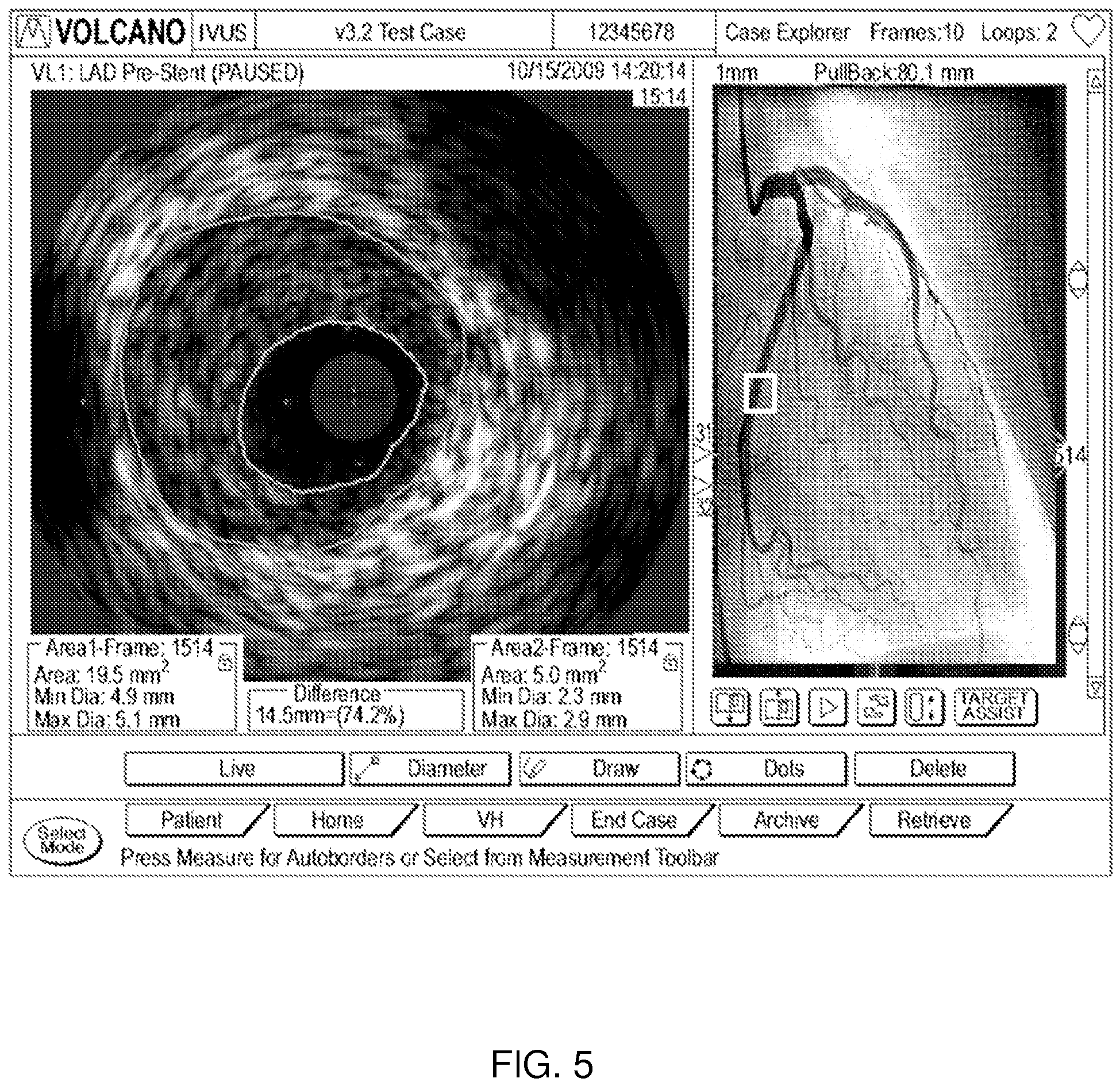 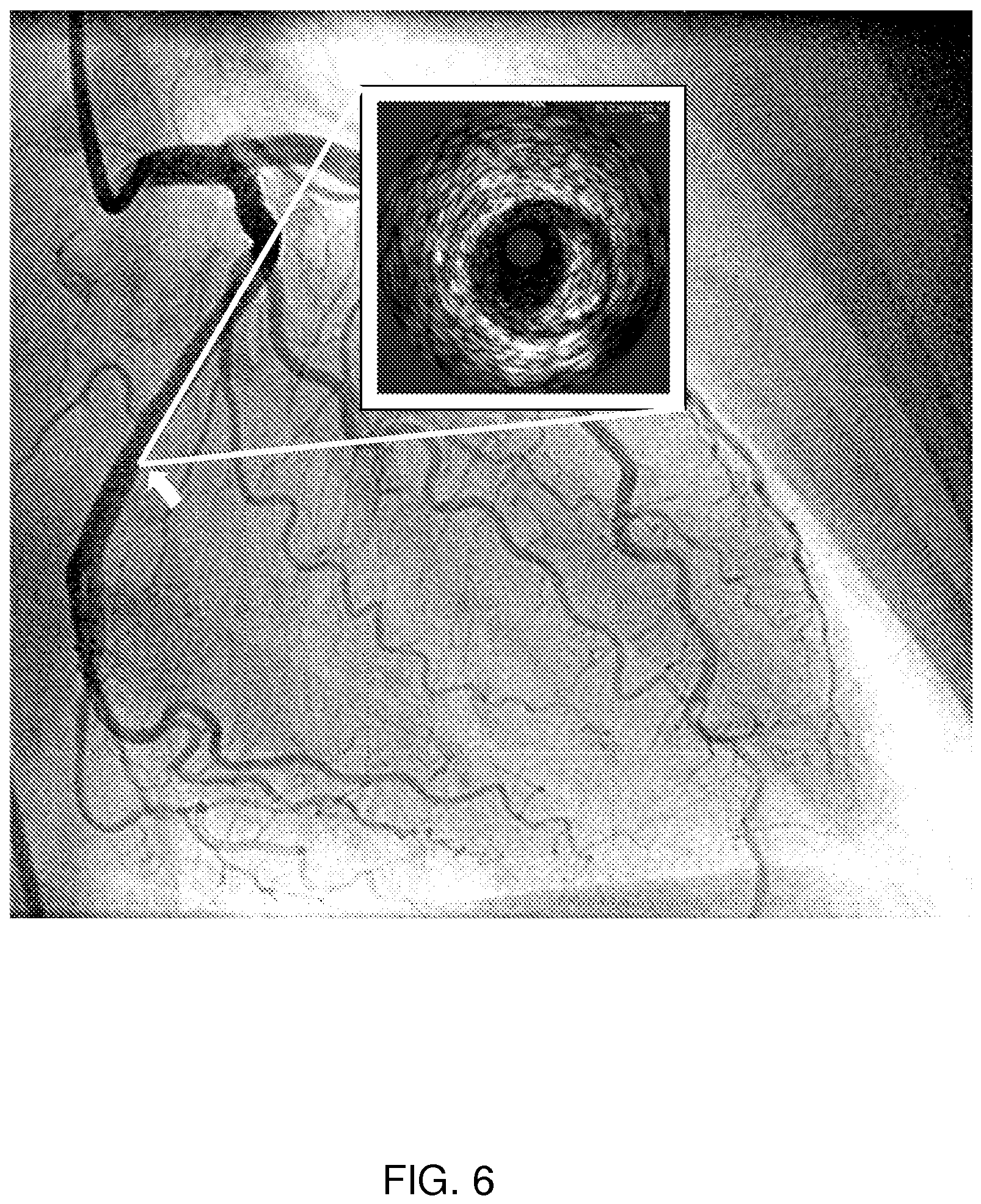 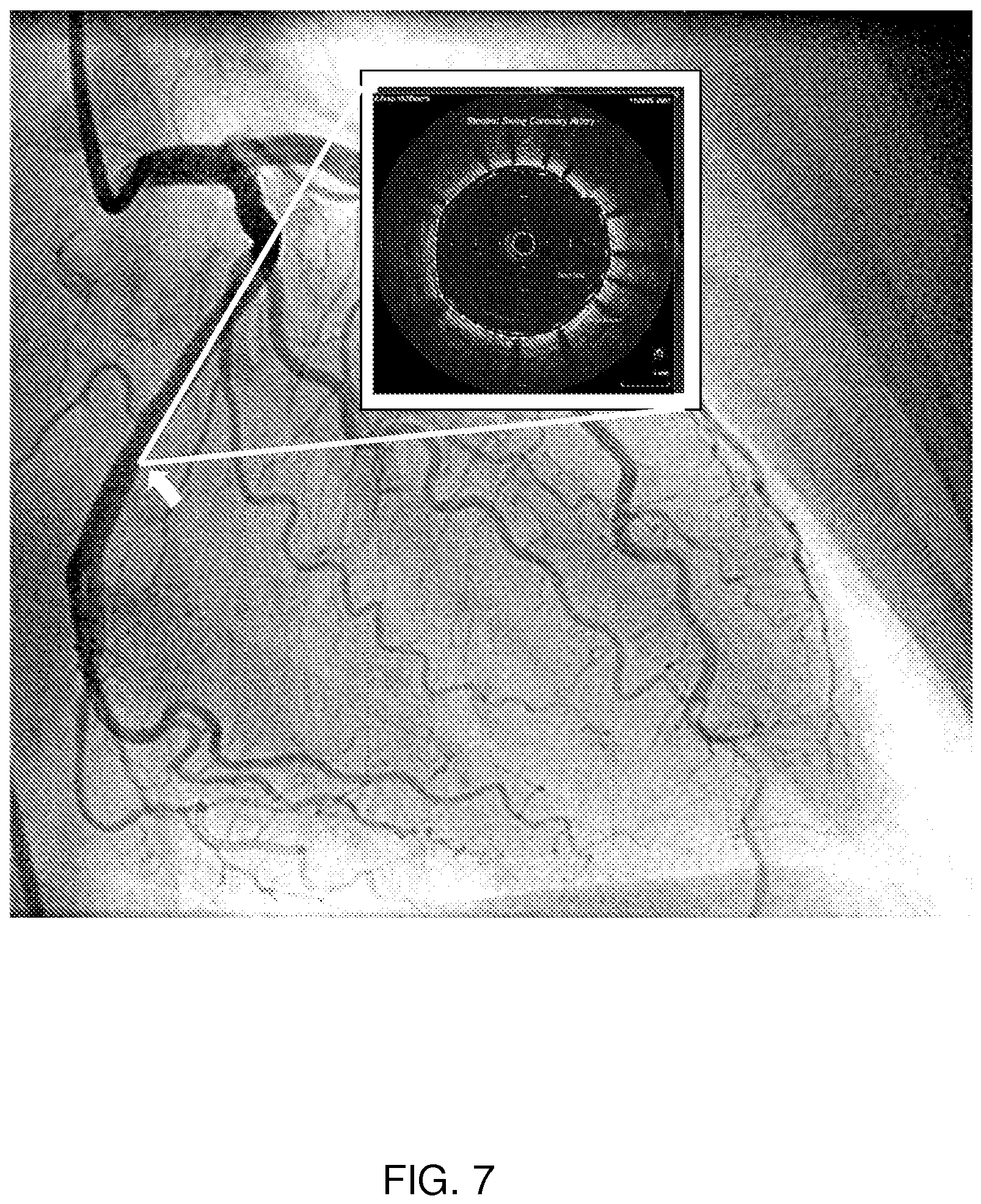 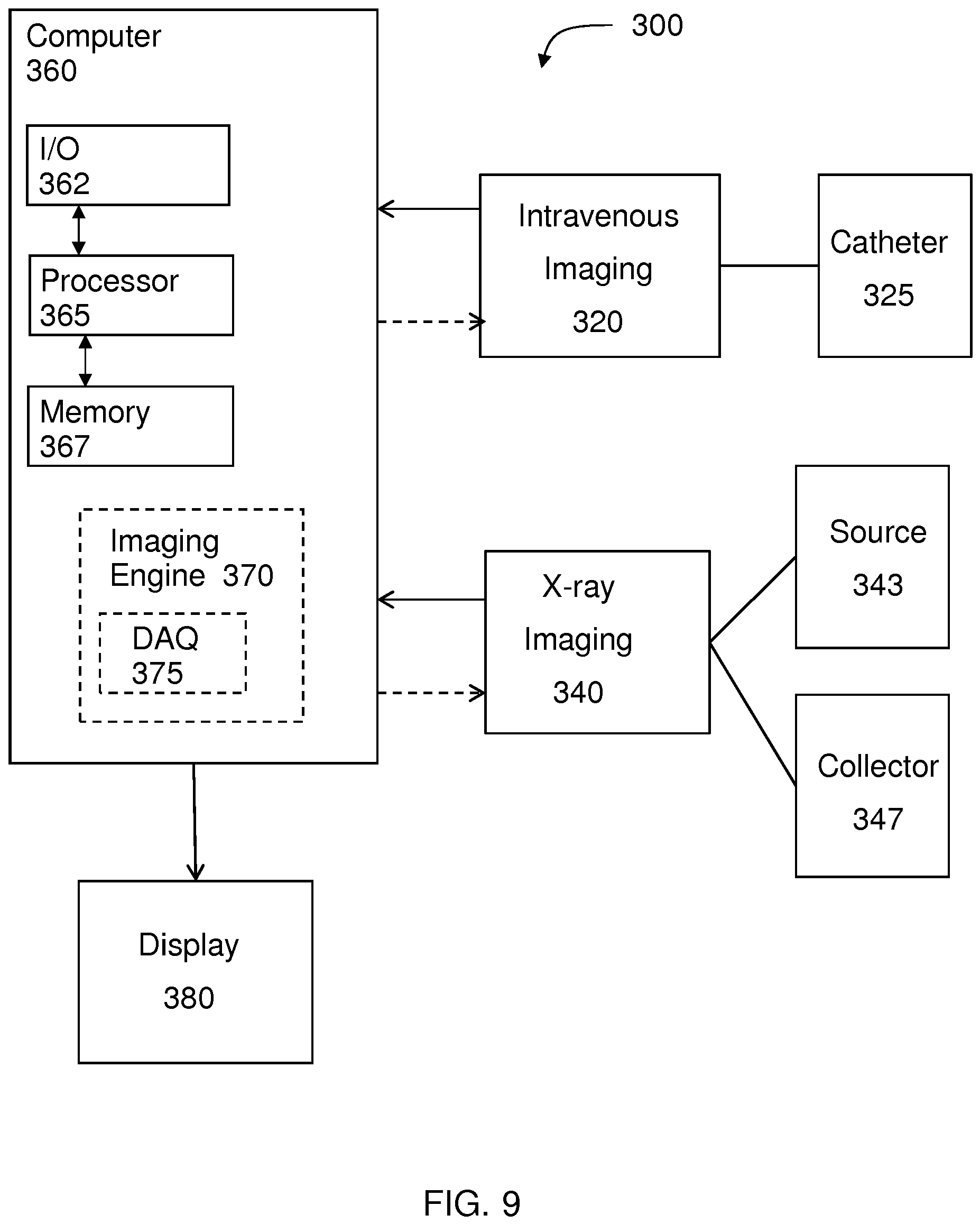 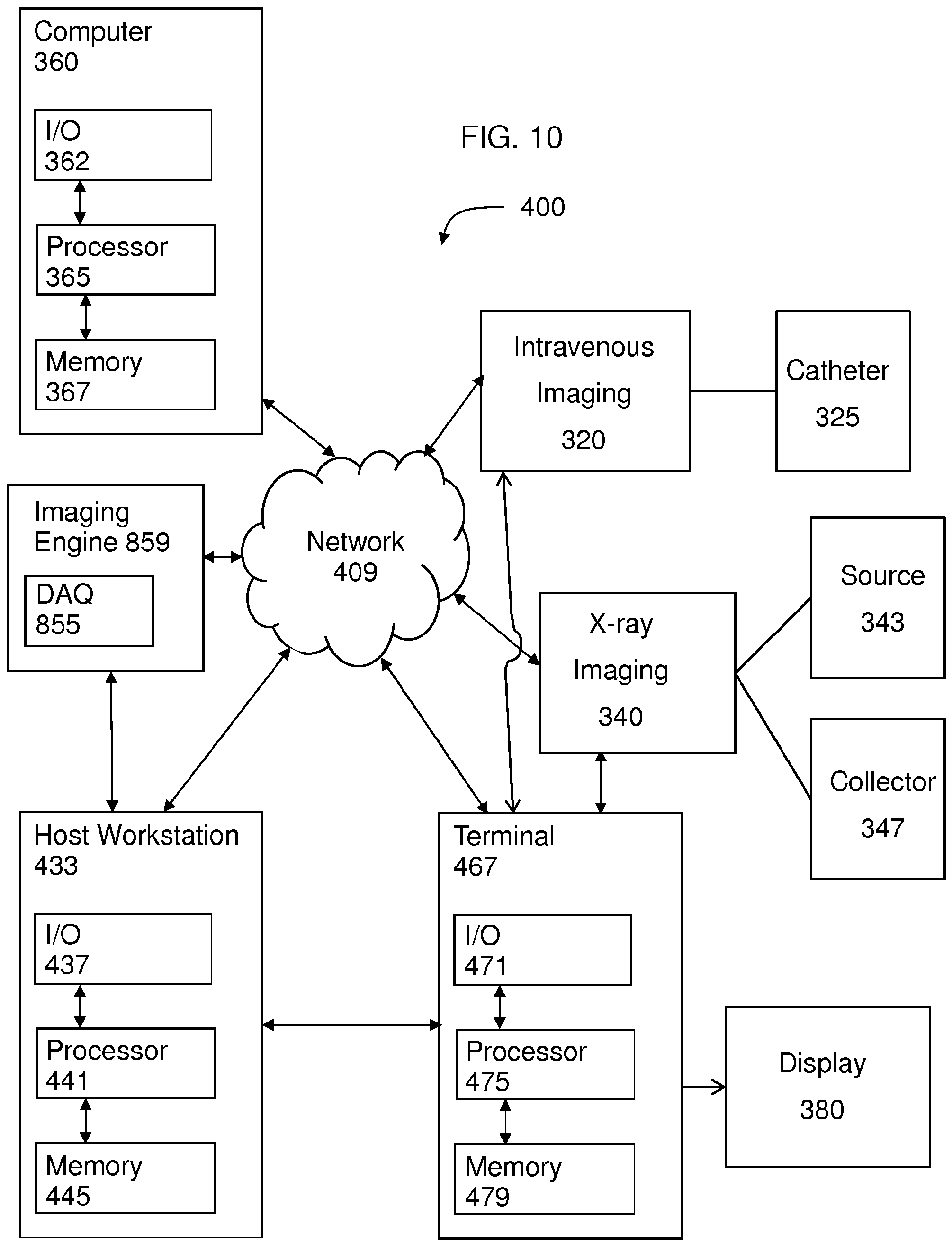