[0001] The invention relates to route based inspections and, in one particular example, an easy to use route based infrared spectrometer oil analysis system.

Fig. 1 is a schematic three dimensional front view showing one example of a hand held, portable route based analysis unit in accordance with the invention;

Fig. 2 is a schematic block diagram showing the primary components associated with an example of an infrared spectrometer subsystem for the unit shown in Fig. 1;

Fig. 3 is a block diagram showing the primary components associated with an example of a processing subsystem of the analysis unit depicted in Fig. 1;

Figs. 5A-5D are screen shots of the display for the unit shown in Fig. 1 showing a route and displayed oil properties;

Fig. 6 shows the primary steps associated with populating a structured database as shown in Fig. 3;

Fig. 7 is another flow chart depicting the several steps associated with the programing of the processor shown in Fig. 3;

Fig. 8 is a depiction of the main menu generated by the programing associated with the processor of Fig. 3 displayed on the display screen of the system shown in Fig. 1.

[0081] Clicking on the Manage Routes item in the main menu, Fig. 8 will bring the user to the "Batch Management" screen. This screen will present the user with a list of all batches still in the system along with their status.
[0082] The first row will be selected and highlighted by default.
[0083] Soft Buttons (SB) at the bottom of screen will change depending on which row is currently selected in the list.

[0086] The "Run Route" screen provides a list of all samples to be done for this route.

[0087] Master Database will provide the capability to export sample batch information by exporting the necessary data into a CSV (comma separated values) file. The file will be written to a USB stick so it can be transferred over to the mobile device.
[0088] Each row in the file represents one sample request and is terminated with a CRLF. The samples will be ordered in the device based on the order in the file. If there is no value for a given field, there should still be a comma to maintain the position of the data.

[0089] Handheld, portable route based analysis unit will require at a minimum:

[0095] Master Database will provide alarm limits as part of the route import file. Each route record may contain one or more limit records (one per property). Not all properties require limits. Properties will be mapped between Master Database and Hand held, portable route based analysis unit using the internal Parameter ID. This is the same parameter that will be used when exporting the data out to Master Database.
[0096] The Hand held, portable route based analysis unit may use these limits for this single sample instance. It does not store the limits to be used in future samples.
[0097] Master Database has several different limit types and variations.

[0102]
[0103] Specific features of the invention are shown in some drawings and not in others, but this is for convenience only as each feature may be combined with any or all of the other features in accordance with the invention. The words "including", "comprising", "having", and "with" as used herein are to be interpreted broadly and comprehensively and are not limited to any physical interconnection. Moreover, any embodiments disclosed in the subject application are not to be taken as the only possible embodiments.
[0104] Other embodiments will occur to those skilled in the art and are within the following claims.

1. A route based analysis system comprising:
a device (10) including:

a database (82) with route data, the type of oil used in each asset on a route, oil property analysis methods and reference spectrums and alarm sets for different types of assets along the route;

a processing subsystem (80) responsive to the infrared spectrometer subsystem (62,64) and operating computer programs adapted to:

display (90) on the display (72) a route from the database (82) including assets with oil to be inspected;

determine (94) the type of oil used in each asset by searching the database (82);

analyze (100) the spectrum of each asset's oil produced by the infrared spectrometer subsystem (62,64) using said one or more methods of the database (82) producing oil properties after introducing an oil sample (60) from the respective asset to the sample cell (12) along the route;

display (104) on the display (72) said oil properties and any alarm indications.

2. The system of claim 1, the processing subsystem (80) further being adapted to locate, for each asset's oil, a reference spectrum.

5. The system of claim 4 in which different oil property analysis methods include differently weighted functions.

6. The system of claim 1 in which said oil properties include water content, acidity, soot content, the presence of additives, and/or percent oxidation, and/or combinations of the same, and for select assets, a calculated total acid and/or saponification number, and for other assets, a total base number.

8. The system of claim 1 further including a screen (72) for said display. 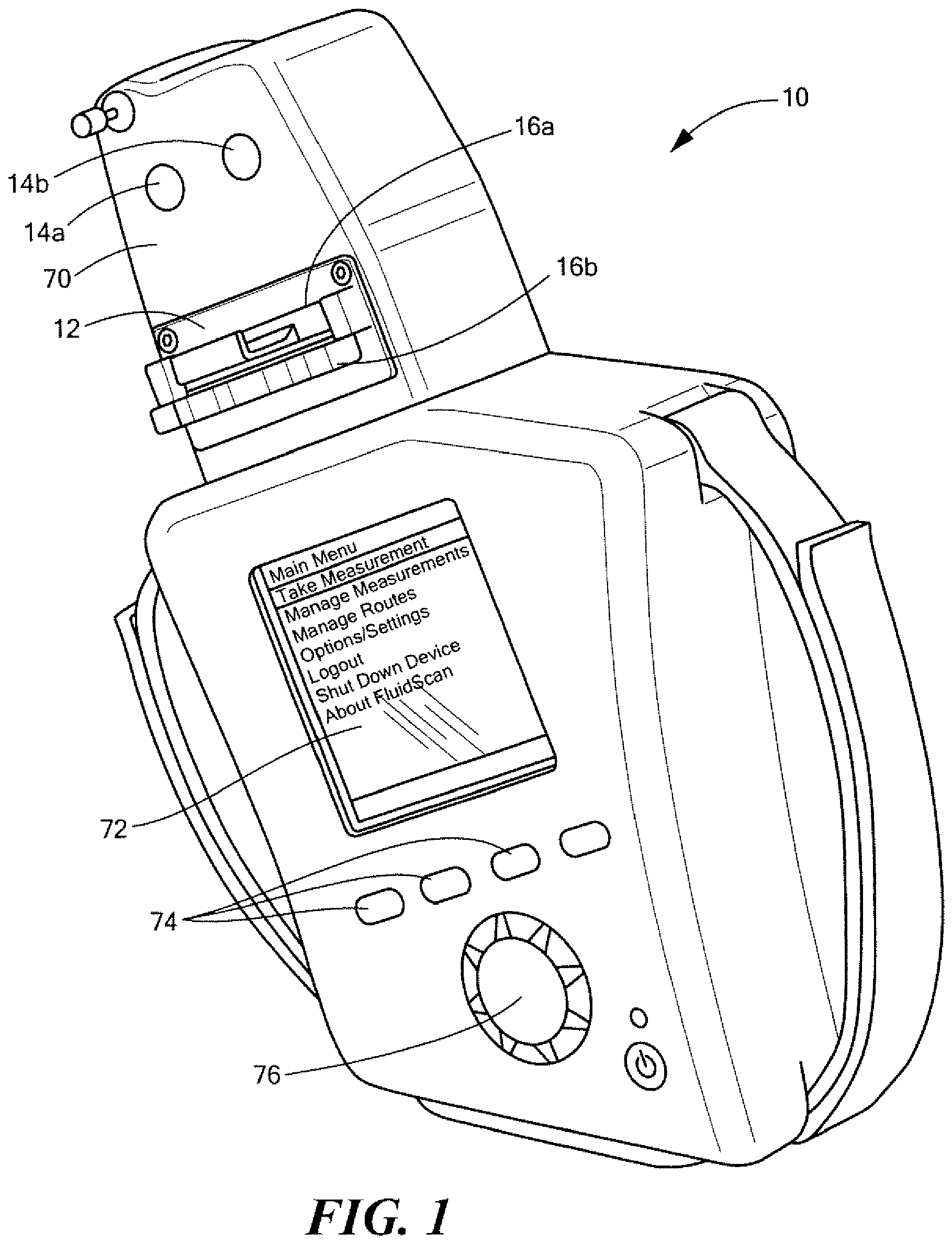 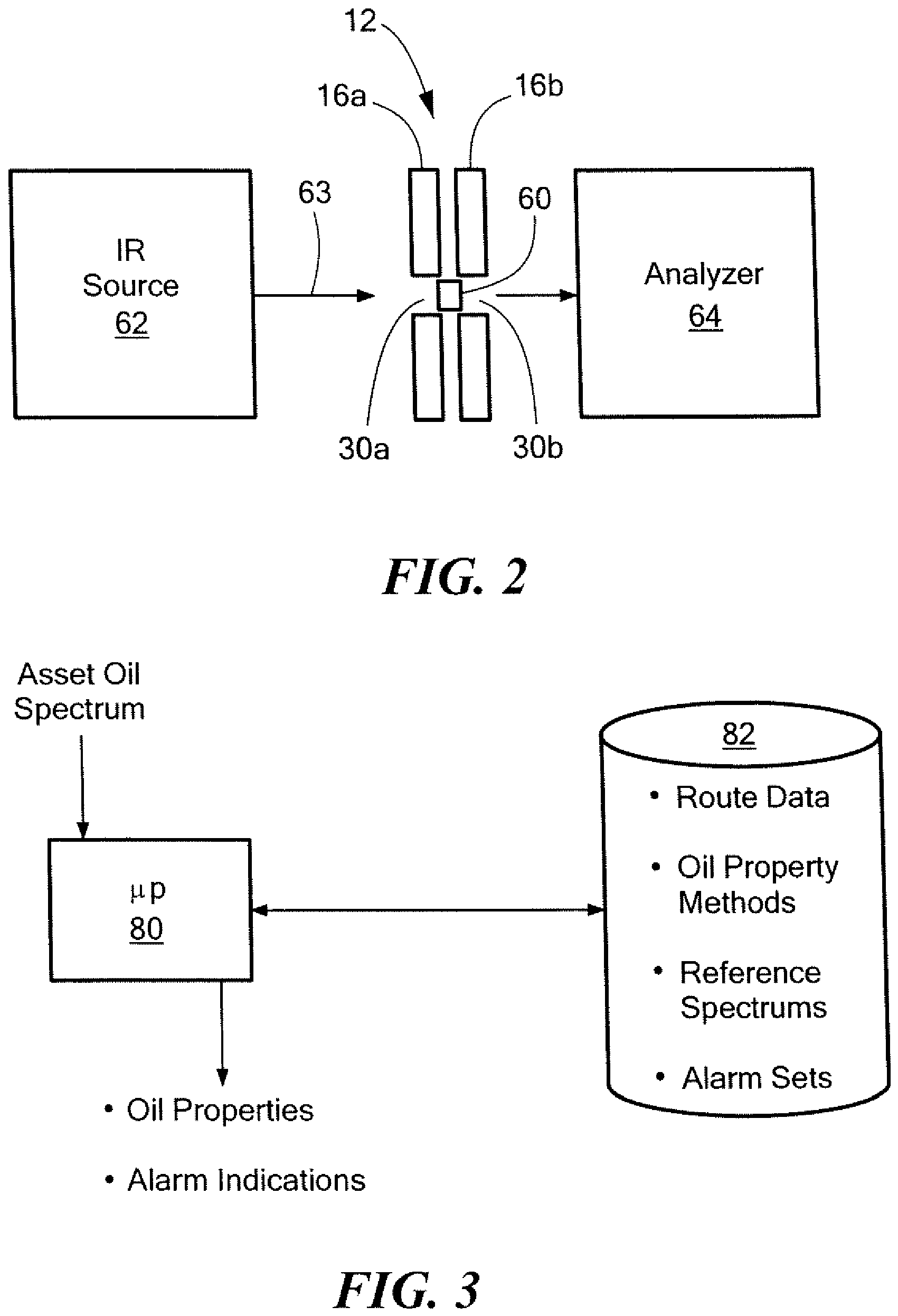 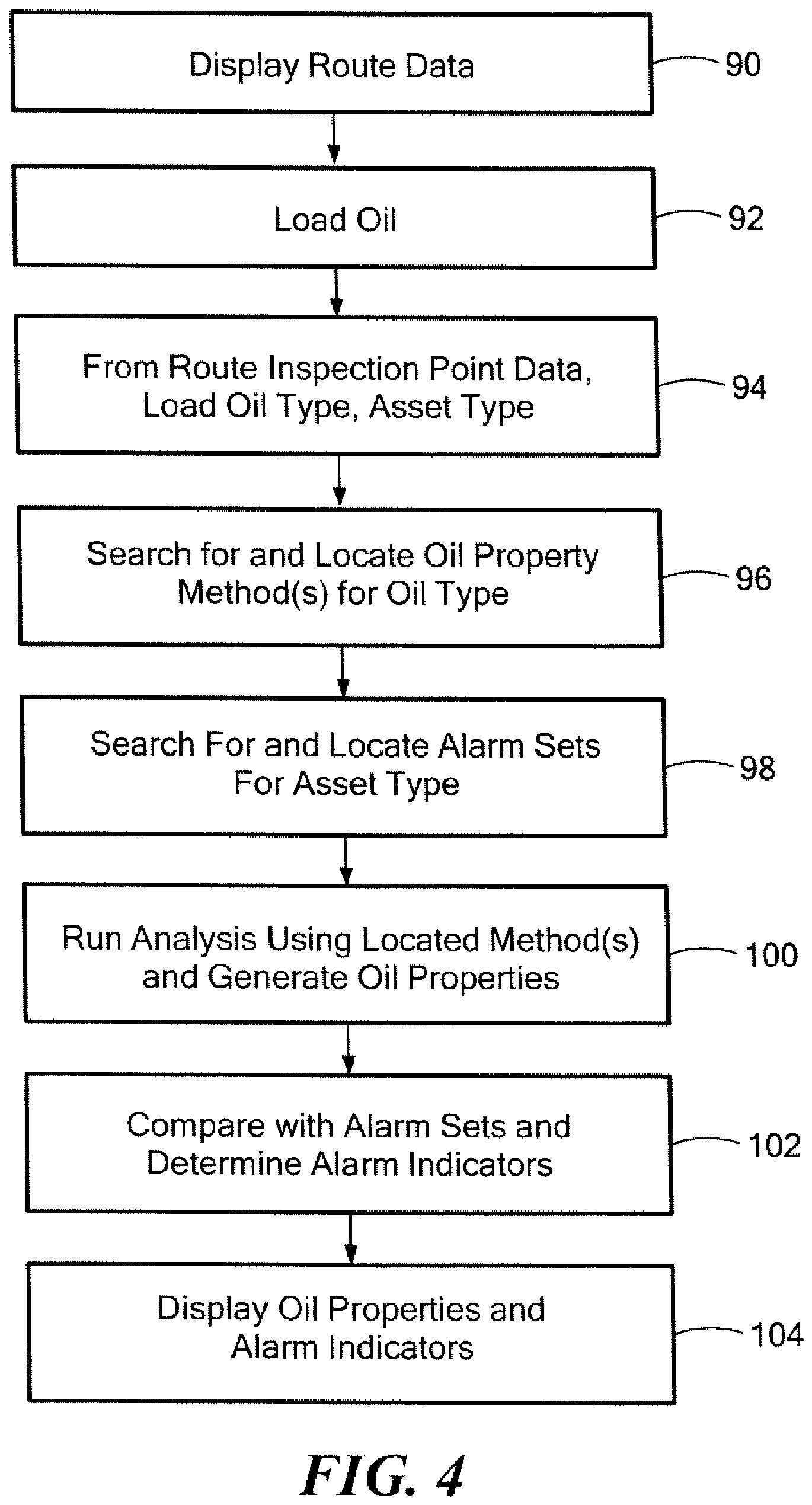 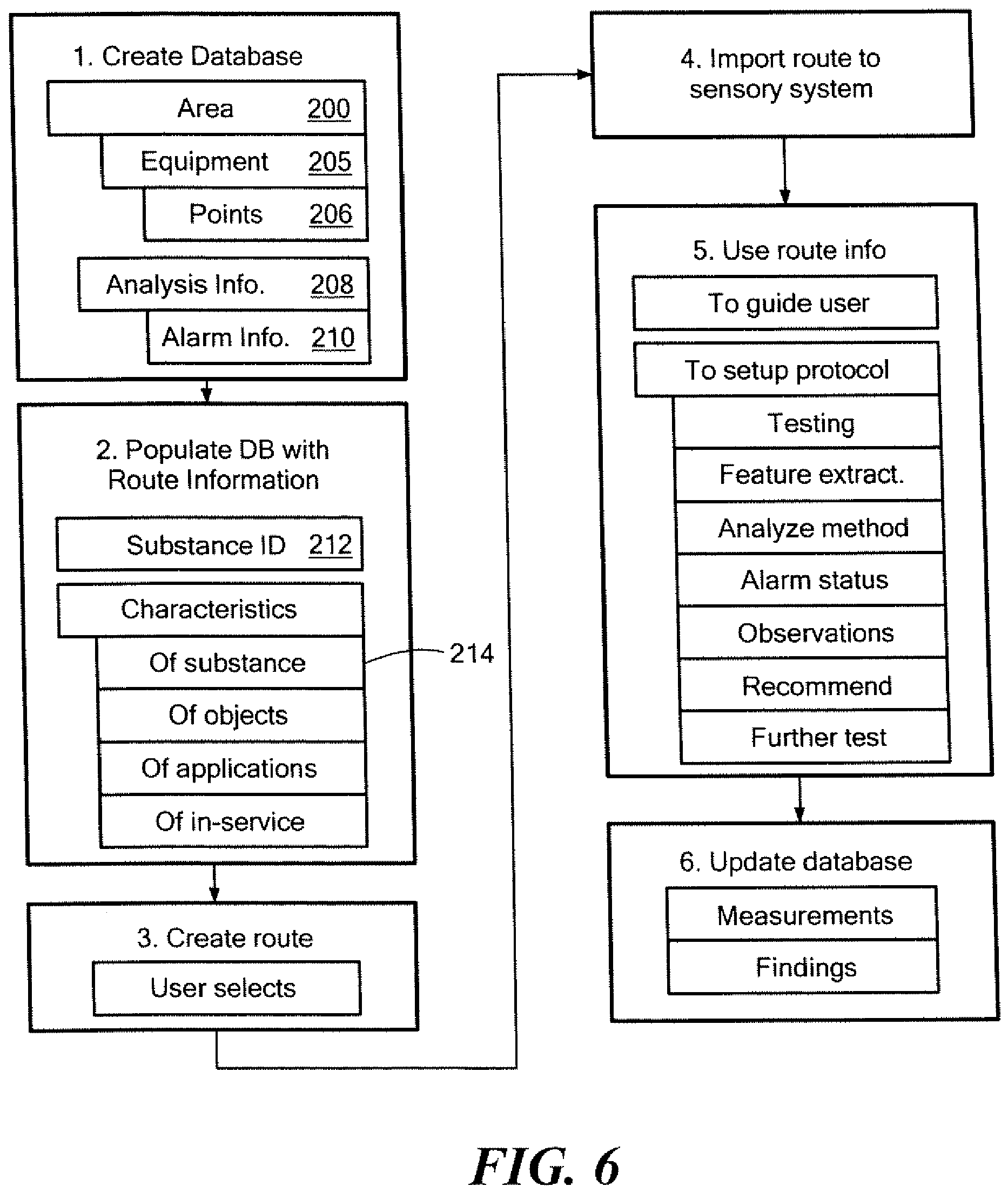 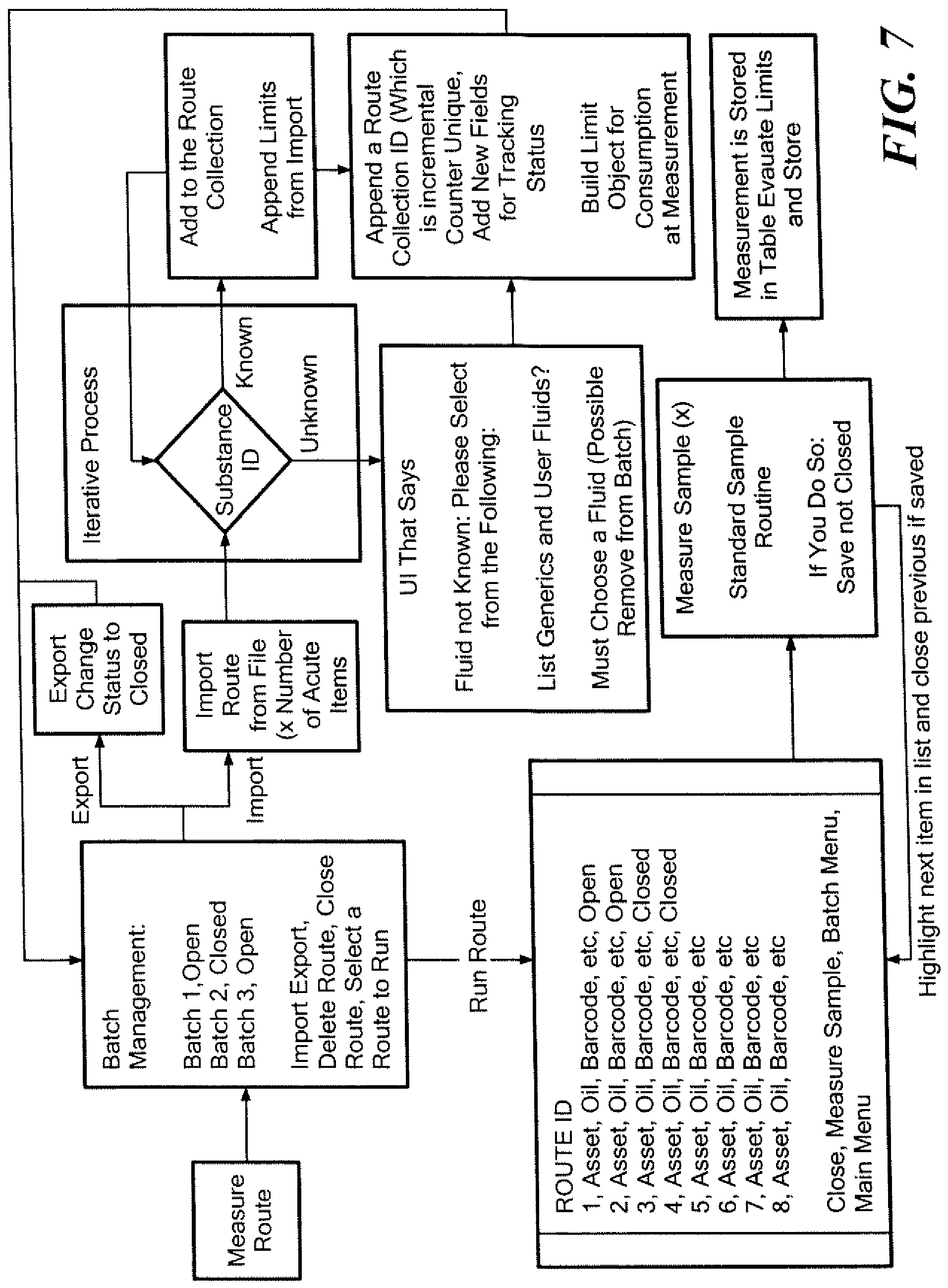 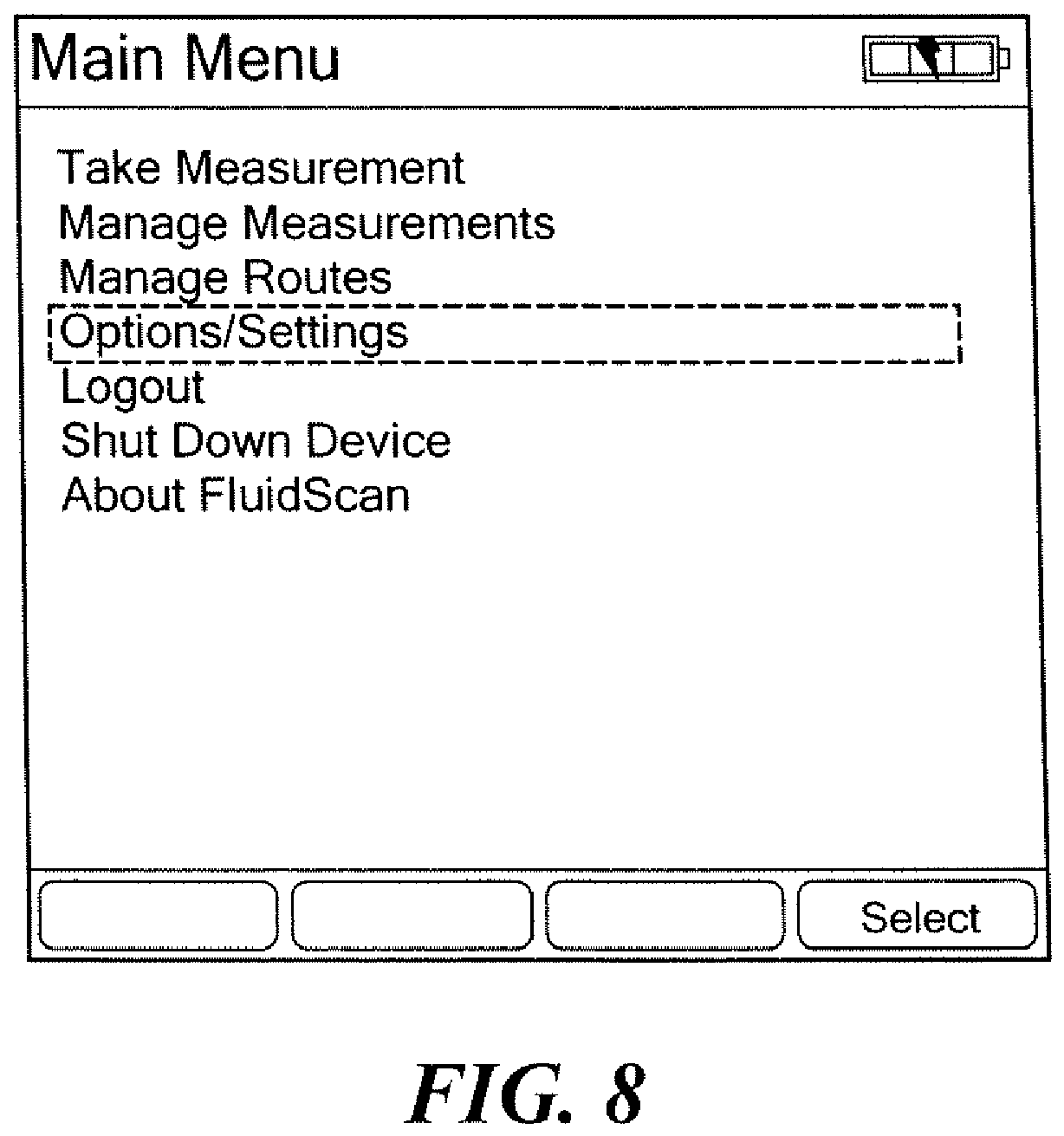