[0001] The present invention relates to an energy system for ventilating and heating dwellings by means of an exhaust heat pump.
[0002] Such a system is known from DE 19614913 A1, wherein an air to water exhaust heat pump draws used air in through adjustable valves in so-called dirty rooms such as bathrooms or kitchens. Fresh air is drawn in through valves high up on the outer wall of clean rooms, such as bedrooms and living rooms, where it is heated by radiators receiving hot water from the heat pump via a furnace. The radiators are shown located far from the outer wall, and nothing is said about how the air circulates between the clean and dirty rooms. The location of the air inlet high up on the outer wall will lead to a cold draft in parts of the room before the fresh air is tempered by mixing with air warmed by the radiator. The warm air from the radiator must therefore have a substantially higher temperature than the desired room temperature, which in turn requires a correspondingly high temperature on the water to the radiator. As a result, it becomes necessary to have a furnace in order to further heat the water from the heat pump before it is supplied to the radiators.
[0003] The present invention aims at providing a complete energy system with an exhaust heat pump and also comprising a ventilation system and a hot water supply to taps and radiators. It is desired to avoid cold draft from inflowing air and high temperatures on the radiators, while concurrently obtaining a ventilation system practically without ducting. This is obtained according to the invention with an energy system as defined in claim 1.
[0004] For better understanding of the invention it will be described more closely with reference to the appended drawings, where:

Figure 1 is a schematic vertical section through a dwelling provided with an exemplary system according to the invention, and

Figure 2 is a schematic showing examples of the main elements in the system according to the invention.

[0005] The dwelling 1 in Figure 1 has different rooms such as a living room 2, a kitchen 3, bedrooms 4, bathrooms 5, a bedsit 6 and a recreation room 7.
[0006] An exhaust heat pump 8 is placed in the recreation room, the heat pump being provided with warm used air from the various rooms via a used air duct 9. Cooled used air from the heat pump is led out above the roof through a discharge duct 10.
[0007] In the outer wall 11 of the clean rooms, an inlet opening 12 for cold fresh air is indicated by the arrows 13. On the inside of the wall 11, in front of the opening 12 a radiator 14 is placed, by which the cold fresh air 13 has to pass and become pre-heated on its way into the room. This pre-heated fresh air is indicated by arrows 15.
[0008] Up on the right in Figure 1, it is shown how the fresh air heated in the bedroom 4 flows through an opening 16 in the bedroom door 17 and further via the corridor 18 into the bathroom 5 through an opening 19 in the bathroom door 20. In a similar manner, warmed air to the bathroom 5 in the basement floor is supplied from the bedsit 6 via the corridor 18 and in through the opening 19 in the bathroom door. Used air from the bathrooms passes into the used air duct 9.
[0009] In the kitchen 3, the warmed fresh air 15 is taken from a neighboring room, e.g. from the bedroom 4 on the floor above. The kitchen may also have its own radiator with fresh air supplied directly from outside.
[0010] The principal drawing in Figure 2 shows schematically the exhaust heat pump 8 having a cold side 21 and a warm side 22, and a compressor 23 therebetween. An exhaust fan 32 causes warm used air 24 to flow in on the cold side and give off heat before being blown out through the discharge duct 10. Two pipe coils run through the warm side 22, one of the coils 25 circulating warm water to the radiators 14, and the other coil 26 circulating warm water for heating the water in a water heater 27 for warm tap water 28.
[0011] The fresh air 13 which flows in through the opening 12 in the wall 11, passes an adjustable valve 29 and a filter 30 on its way into a housing 31, the housing partly surrounding the radiator element 14 and forcing the air to flow past it before leaving the housing as warmed fresh air 15.
[0012] The heat pump 8 may be continuously adjustable, e.g. of the type F750 from the producer Nibe in Sweden, such that it may also run during the summer for i.a. providing heat to the pipe coil 26 and thereby the water heater 27. Nevertheless, the system according to the invention has a high capacity since the compressor 23 of the heat pump may have a rating of 6 kW and pull the exhaust air down to -15 °C. In the summer, this cooled exhaust air may be used for cooling the indoor air via a separate heat exchanger (not shown).
[0013] Since all the fresh air admitted to the dwelling must pass the radiators, they may be held at a lower temperature than if the air from these had to mix with cold inflowing outside air in order to avoid cold draft. Therefore also the temperature of the water to the radiators may be held at a lower level, which in turn provides for optimalization of the efficiency of the heat pump. Moreover, the radiators will be provided with customary equipment for temperature control and possible shutting off.
[0014] It will be understood that the energy system according to the invention provides a combination giving a draft free, effective and cost efficient ventilation and heating solution which does not require complicated supply and exhaust ducting occupying space in ceilings and technical rooms, but which utilizes the dwelling itself as distributor of the pre-heated air through rooms and corridors on its way to the exhaust heat pump which extracts the energy from the air. This energy is recirculated as warm water to the radiators and the water heater, and in this manner the energy in both the incoming air and the energy which is produced by people, lighting and appliances are utilized in an efficient manner.
[0015] It will be understood that the invention is not restricted to the exemplifying embodiment described above, but may be varied and modified by the skilled person within the scope of the following claims. 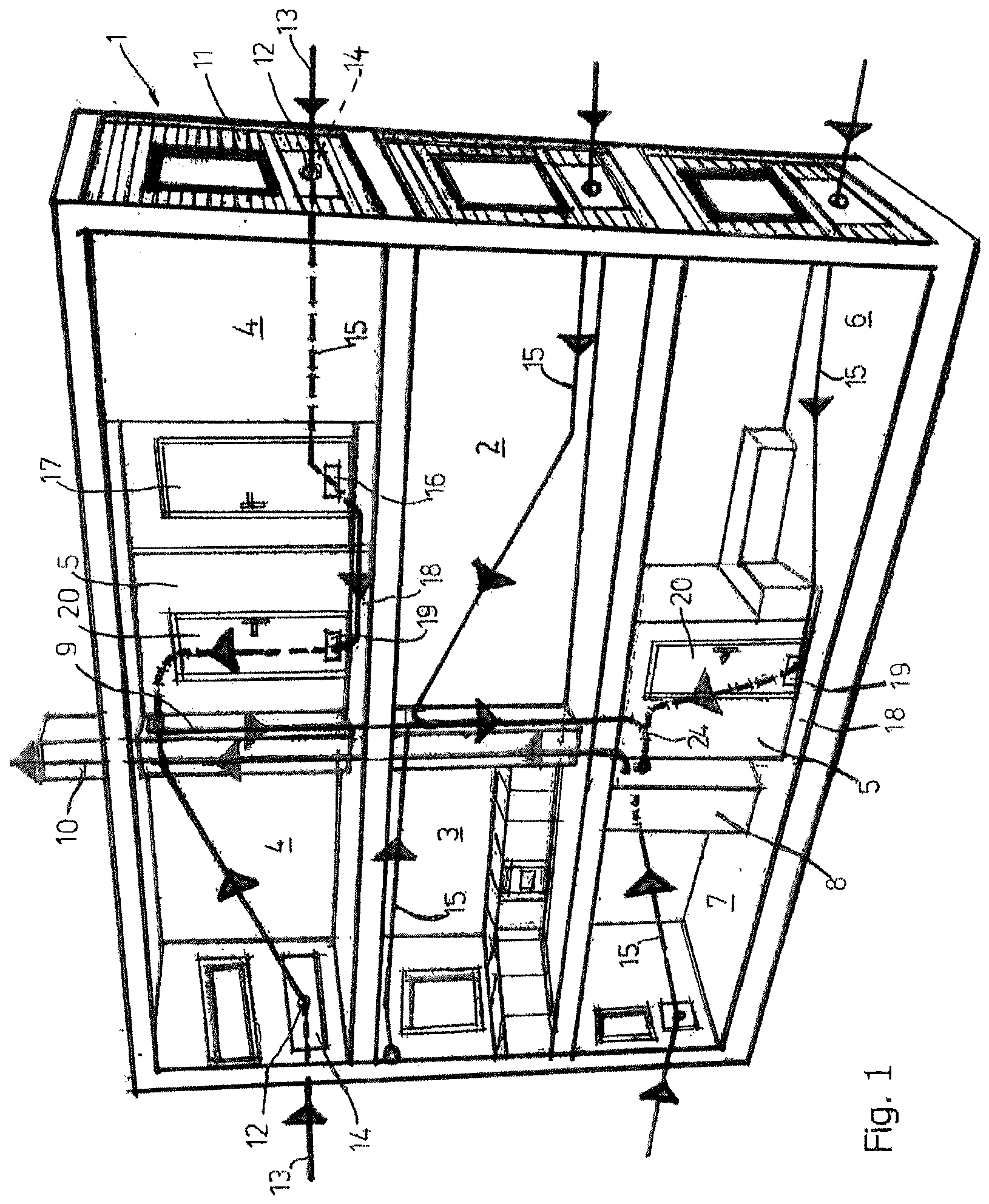 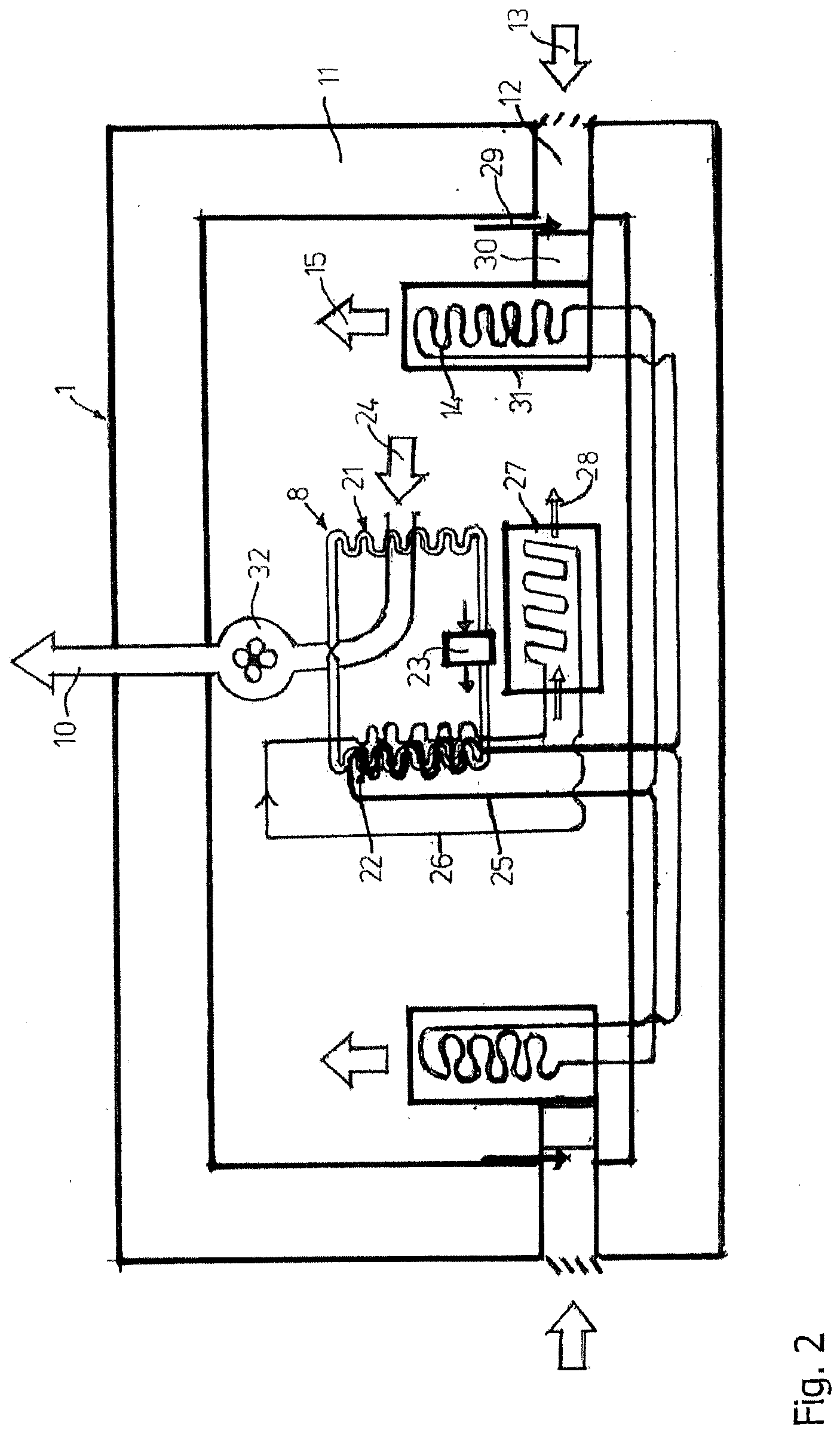