[0001] The invention relates to apparatuses and methods and resulting products like data storage products or encoded signals, e.g. as stored in memories, for improved encoding of at least one image or video with an increased dynamic luminance range compared to legacy images called low dynamic range (LDR) images.

[0042] These and other aspects of the method and apparatus according to the invention will be apparent from and elucidated with reference to the implementations and embodiments described hereinafter, and with reference to the accompanying drawings, which serve merely as non-limiting specific illustrations exemplifying the more general concept, and in which dashes are used to indicate that a component is optional, non-dashed components not necessarily being essential. Dashes can also be used for indicating that elements, which are explained to be essential, are hidden in the interior of an object, or for intangible things such as e.g. selections of objects/regions (and how they may be shown on a display).
[0043] In the drawings:

Fig. 1 schematically illustrates a legacy image or video encoding system, as exemplified with a camera with tunable kneepoint;

Fig.2 schematically illustrates a first possible realization of our image coding system, in which the automatic grading unit derives the automatically graded second LDR image GT_IDR on the basis of a prior human LDR grading;

Fig.3 schematically illustrates a second possible realization of our image coding system in which an automatically graded second LDR image GT_IDR from an automatic grading unit serves as a basis for by further grading defining a final LDR grading Im_LDR by a human grader;

Fig. 4 schematically illustrates a possible variant of an image decoding system, in which a high end decoding apparatus reads the coded data according to any of our coding embodiments, and derives therefrom appropriate signals for various different connected displays;

Fig. 5 schematically illustrates an encoder embodiment according to the principles of our invention being incorporated in a camera;

Fig. 6 schematically illustrates a principle behind a variant of our encoding, shown as a logical graph of color mapping relationships between gradings;

Fig. 7 schematically illustrates a way to define our starting input which is a master HDR grading M HDR, and shows how data from a camera or computer graphics system can be written into such a mathematical color specification, in particular along the range of its luminance-correlate;

Fig. 9 schematically illustrates an example of how to determine whether any mapping function or algorithm has suitable accuracy for reconstruction of the REC_HDR;

Fig. 10 schematically illustrates an example of how to transform an unsuitable function into a suitable one;

Fig. 11 schematically illustrates some examples of how to handle the color mapping in 3D color space;

Fig. 13 schematically illustrates how one can go from a technical grading which in this example would be usable for LDR rendering already, to a better looking LDR grading, by a very simple parametric transformation realizing a good quality content-adaptive contrast stretching;

Fig. 14 gives an example of how one can handle further colorimetric limitations in the technical grading, which can upon receipt then be used when generating the optimal image for rendering on a particular display;

Fig. 15 schematically illustrates a useful new strategy for saturation processing, which is especially interesting for grading to color representations having a different luminance structure, such as e.g. because of an intended rendering on a display of a different luminance dynamic range;

Fig. 16 schematically illustrates a creation and usage part apparatus for such novel saturation processing; and

2. An image encoder (202) as claimed in claim 1, arranged to use as the representation (HDR_REP) the high dynamic range input image (M_HDR) or the second low dynamic range image (GT_IDR).

7. An image decoder (401) as claimed in claims 5 or 6 having as an output a wired connection (410) or a wireless connection (415) to any connectable display, and a signal formatter (407) arranged to transmit at least one or both of the reconstruction (REC_HDR) and the low dynamic range image (Im_LDR) to any connected display.

8. An image decoder (401) as claimed in claims 5 or 6, in which the image derivation unit (403) is arranged to determine a further image (FURTHGR) based on the reconstruction (REC_HDR) and the low dynamic range image (Im_LDR), or the second low dynamic range image (GT_IDR) and data describing the first color mapping (Fi(MP_T)) and data describing the second color mapping (Fi(MP_DL)).

11. A method of image encoding comprising:

12. A method of image decoding comprising: 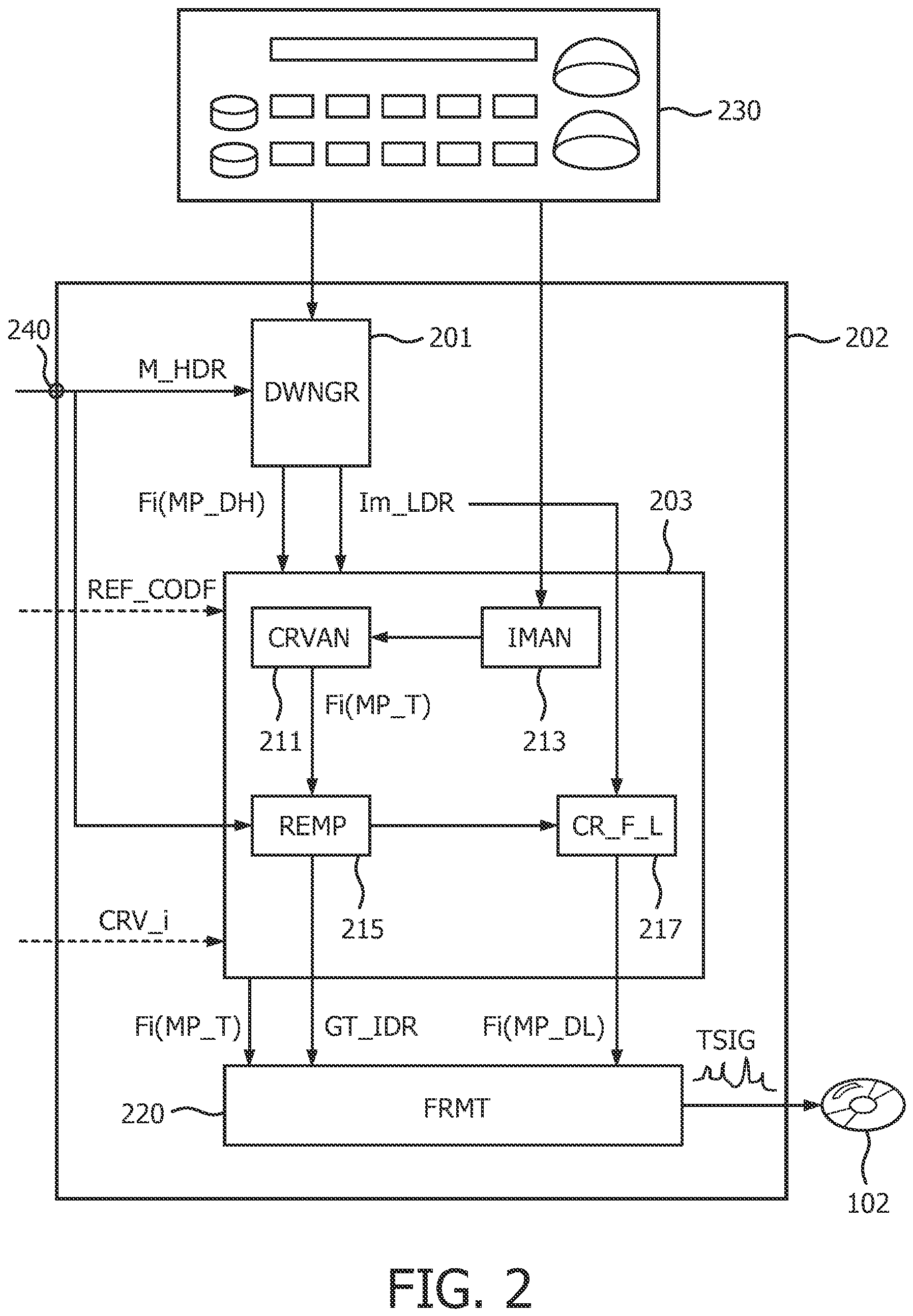 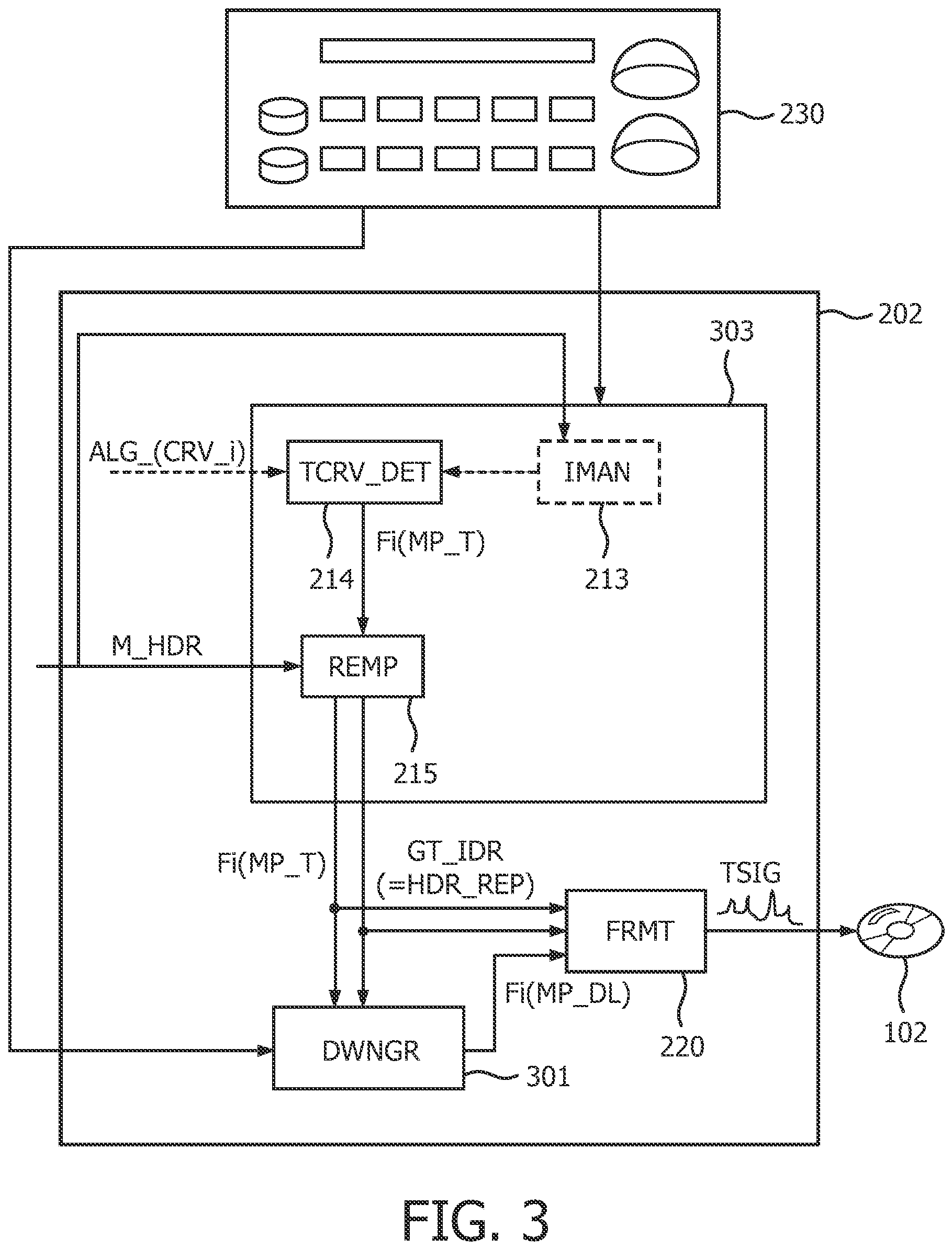 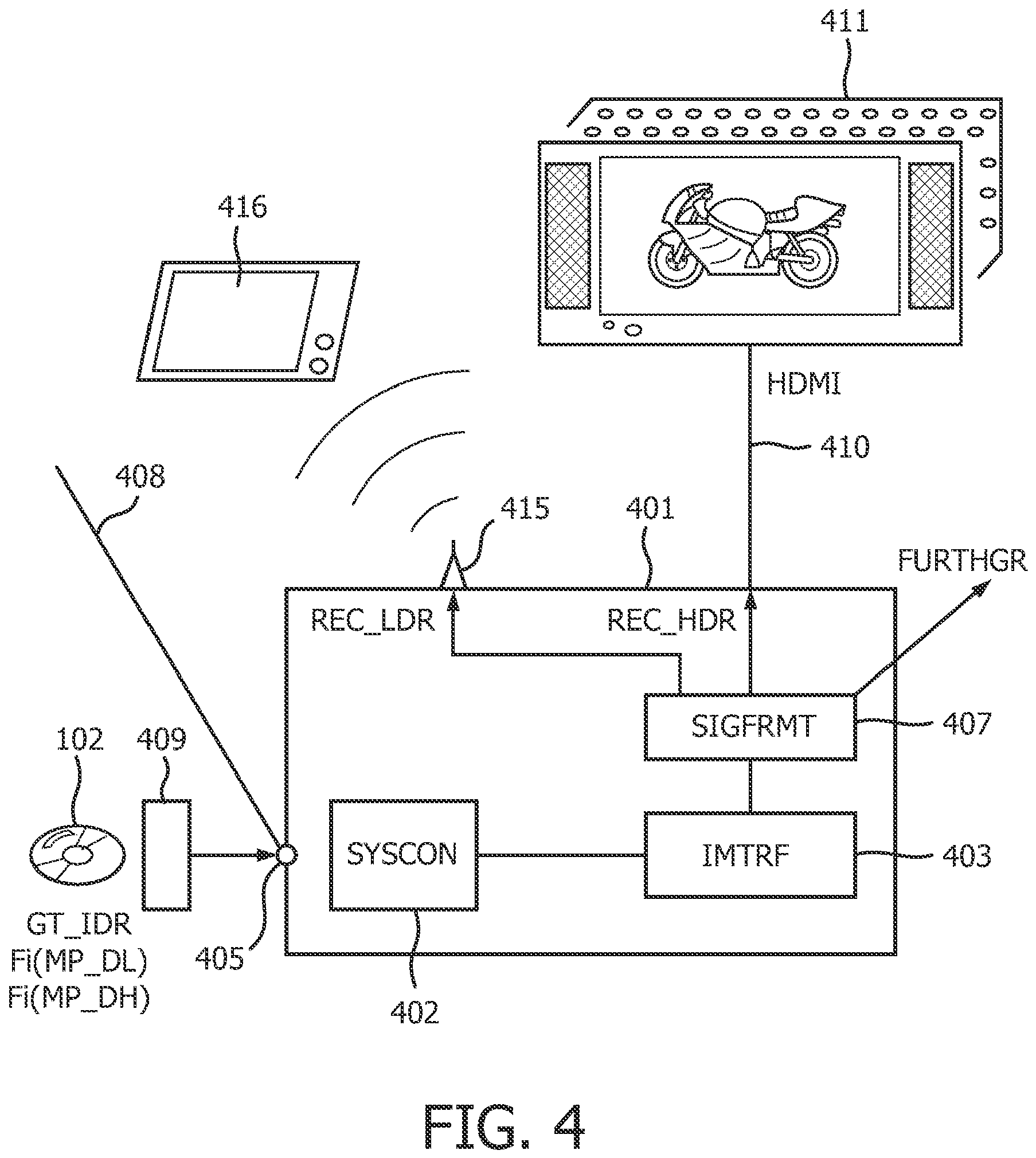 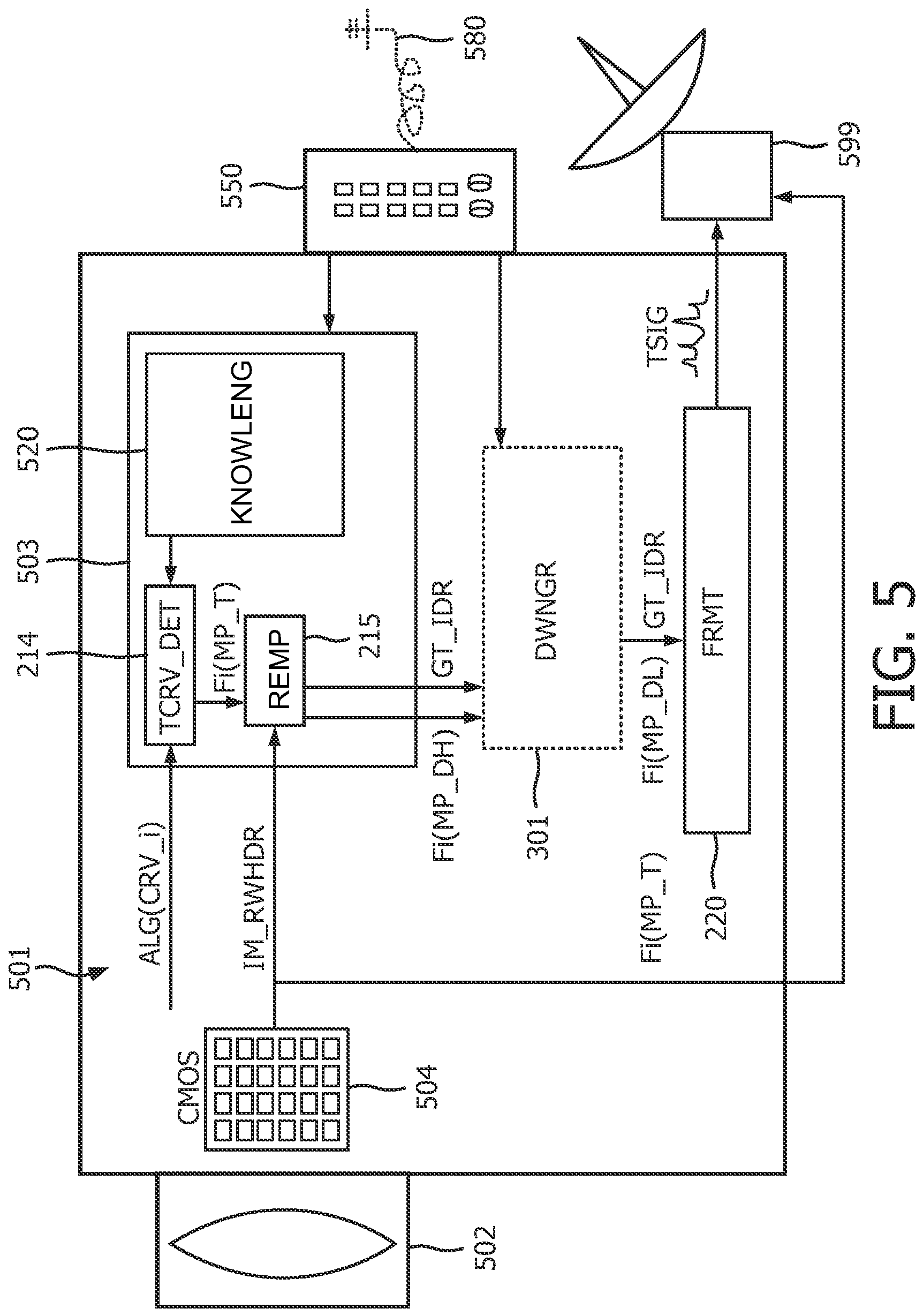 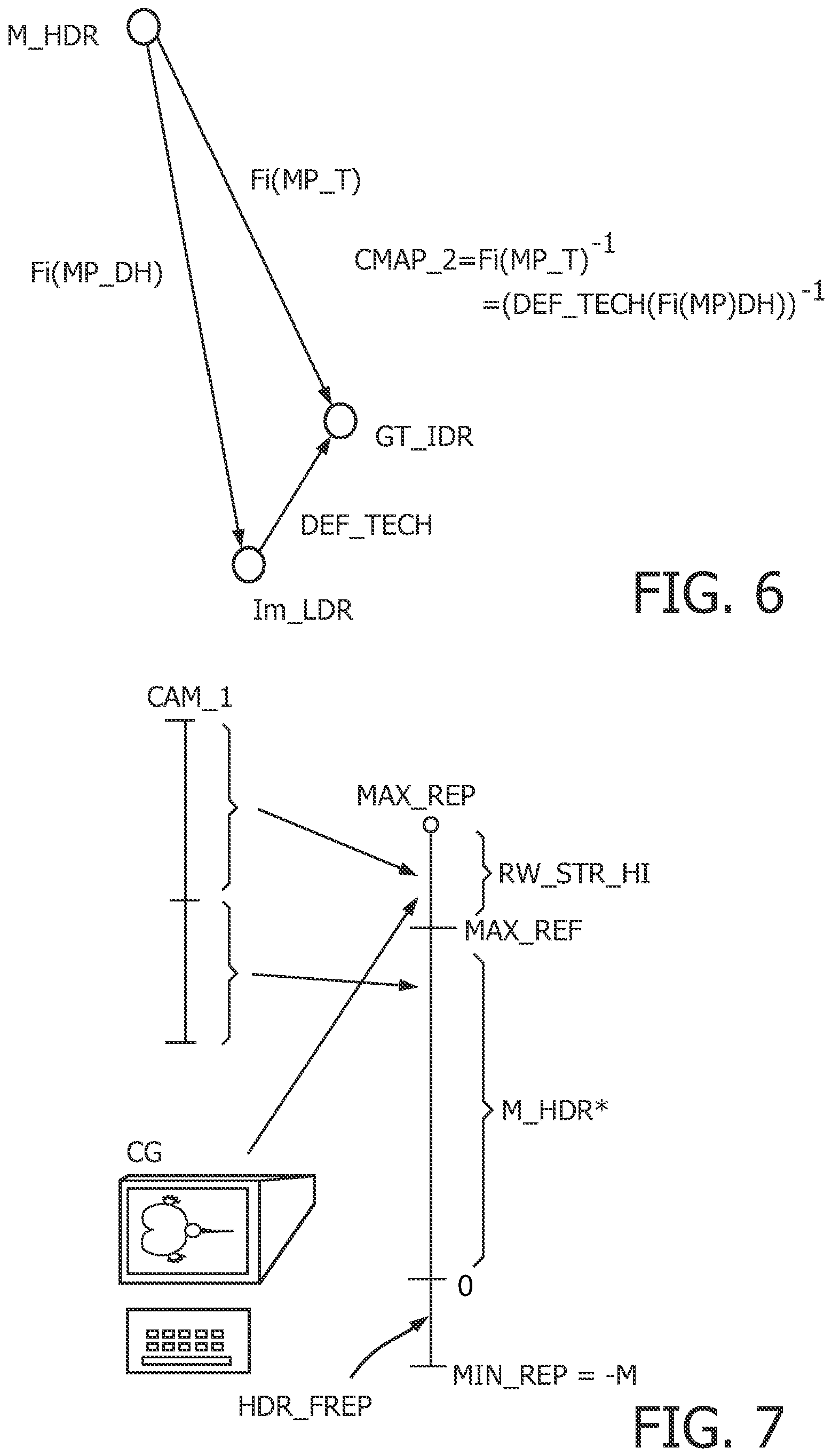 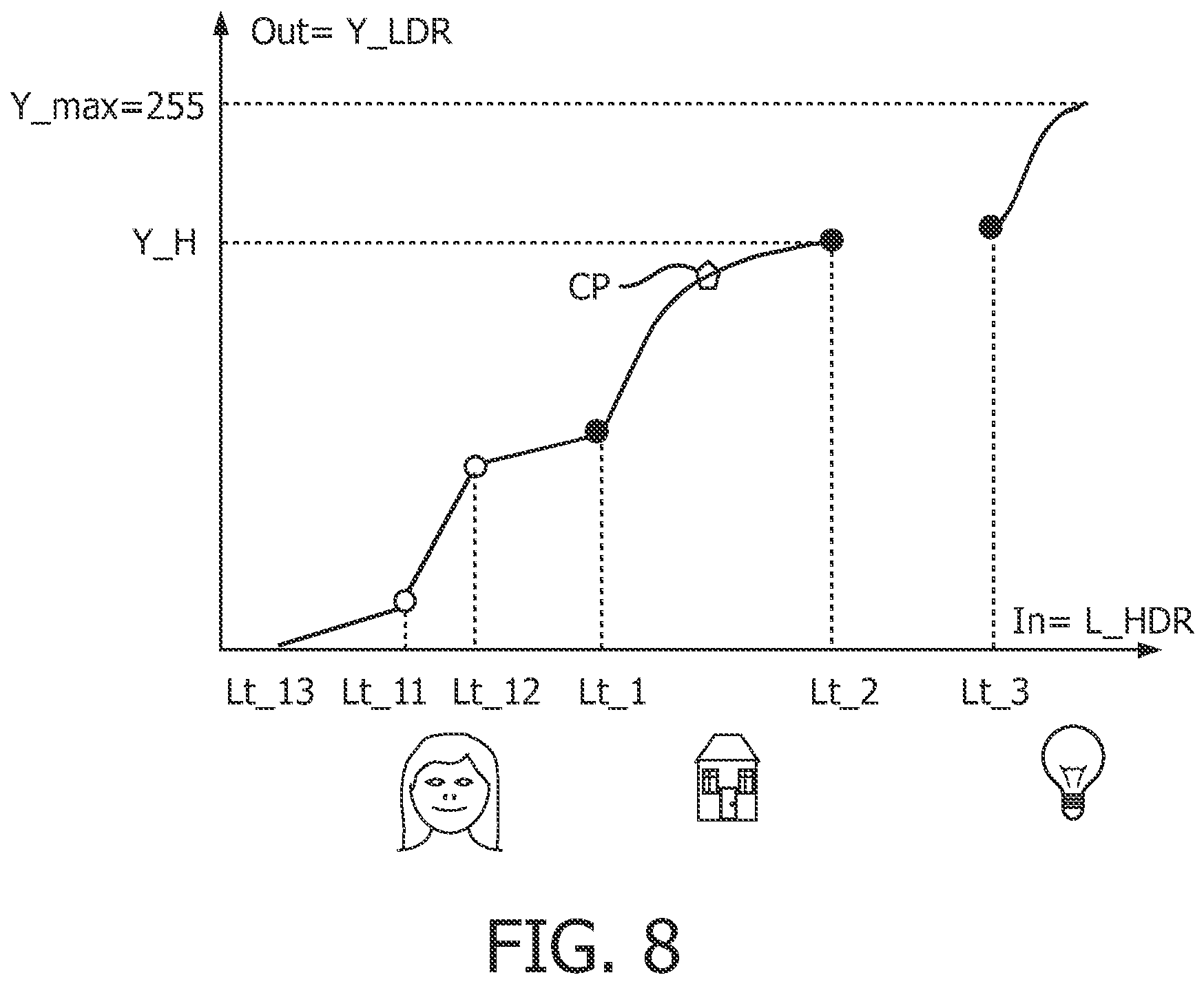 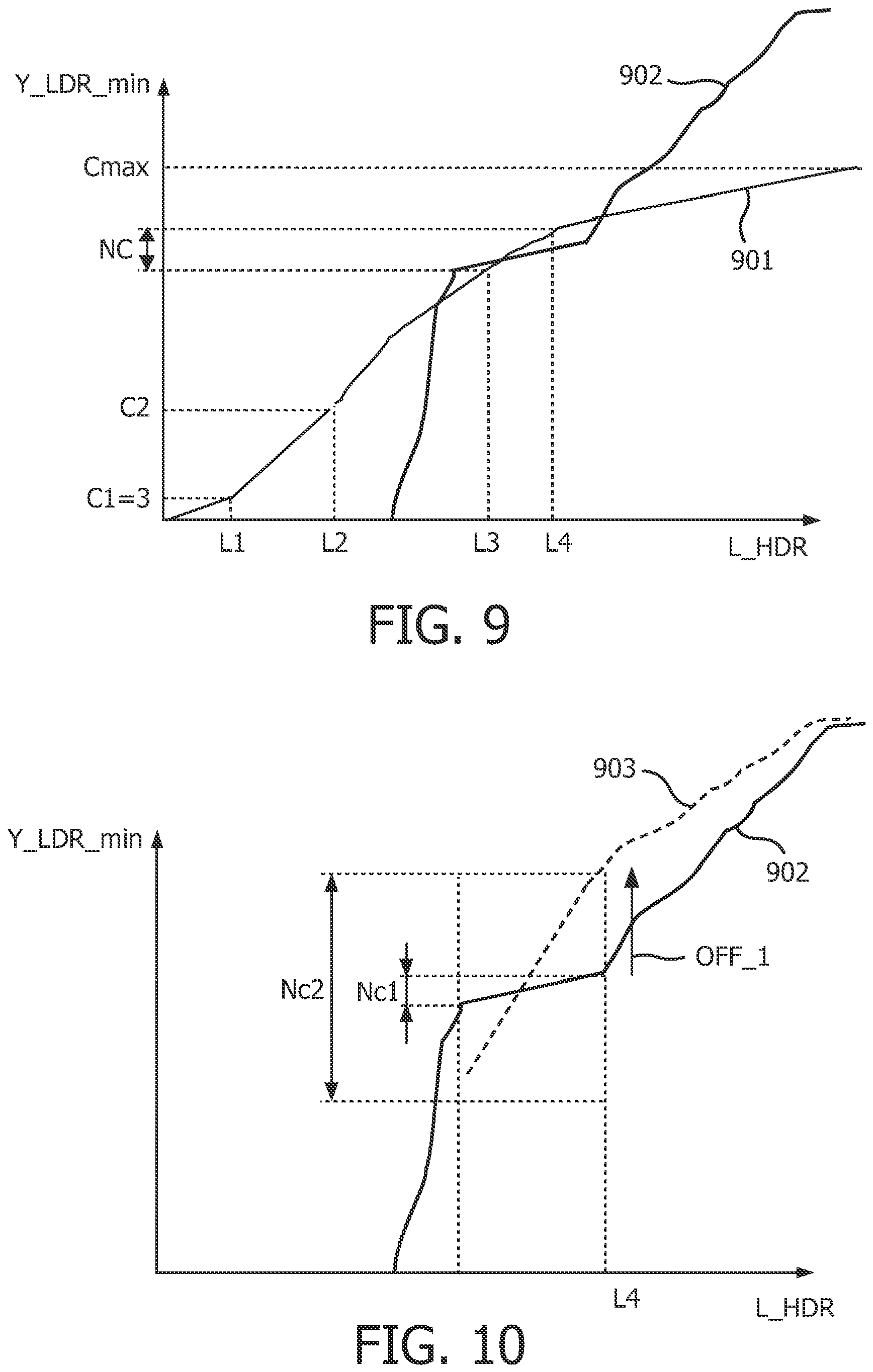 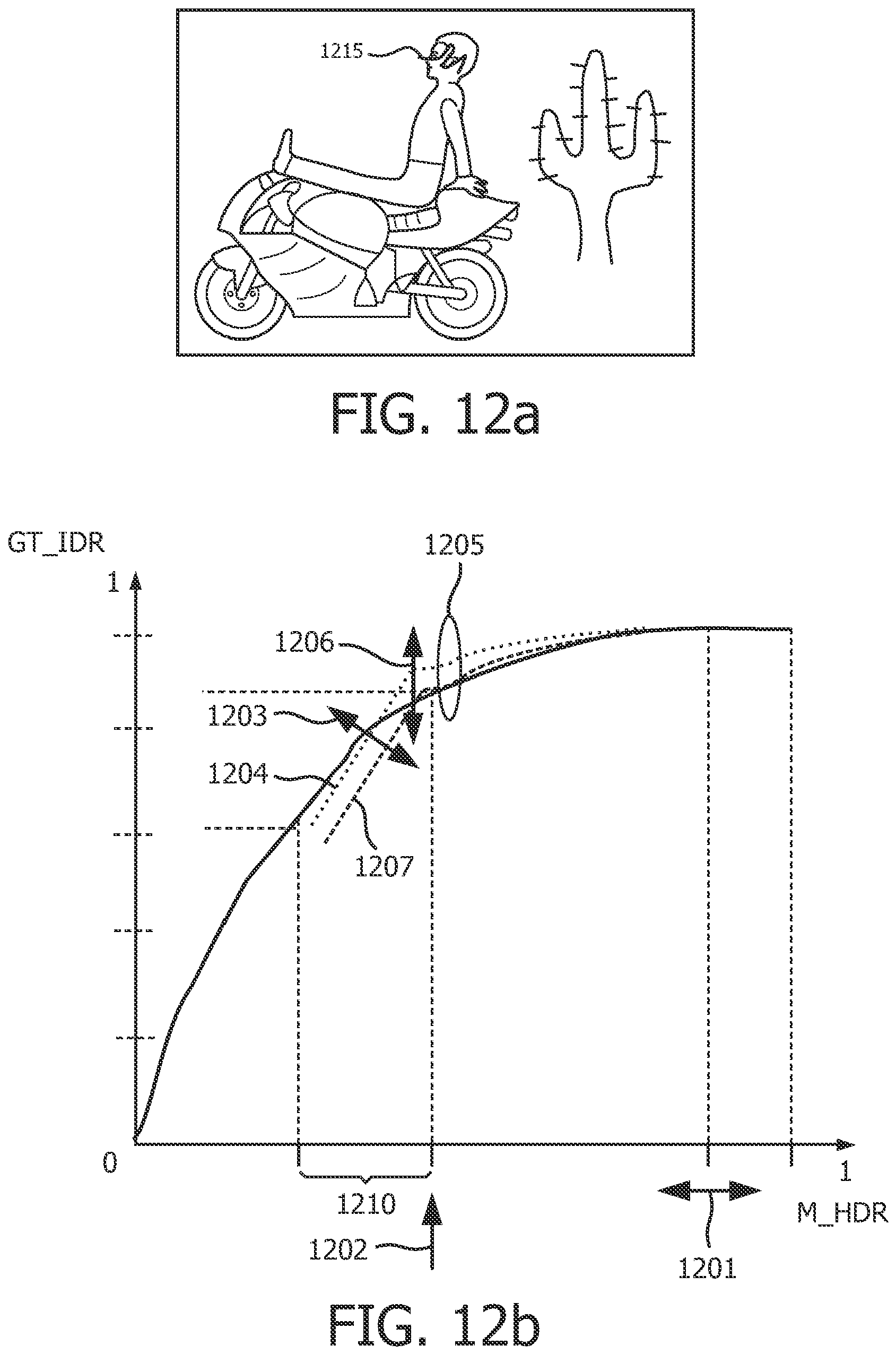 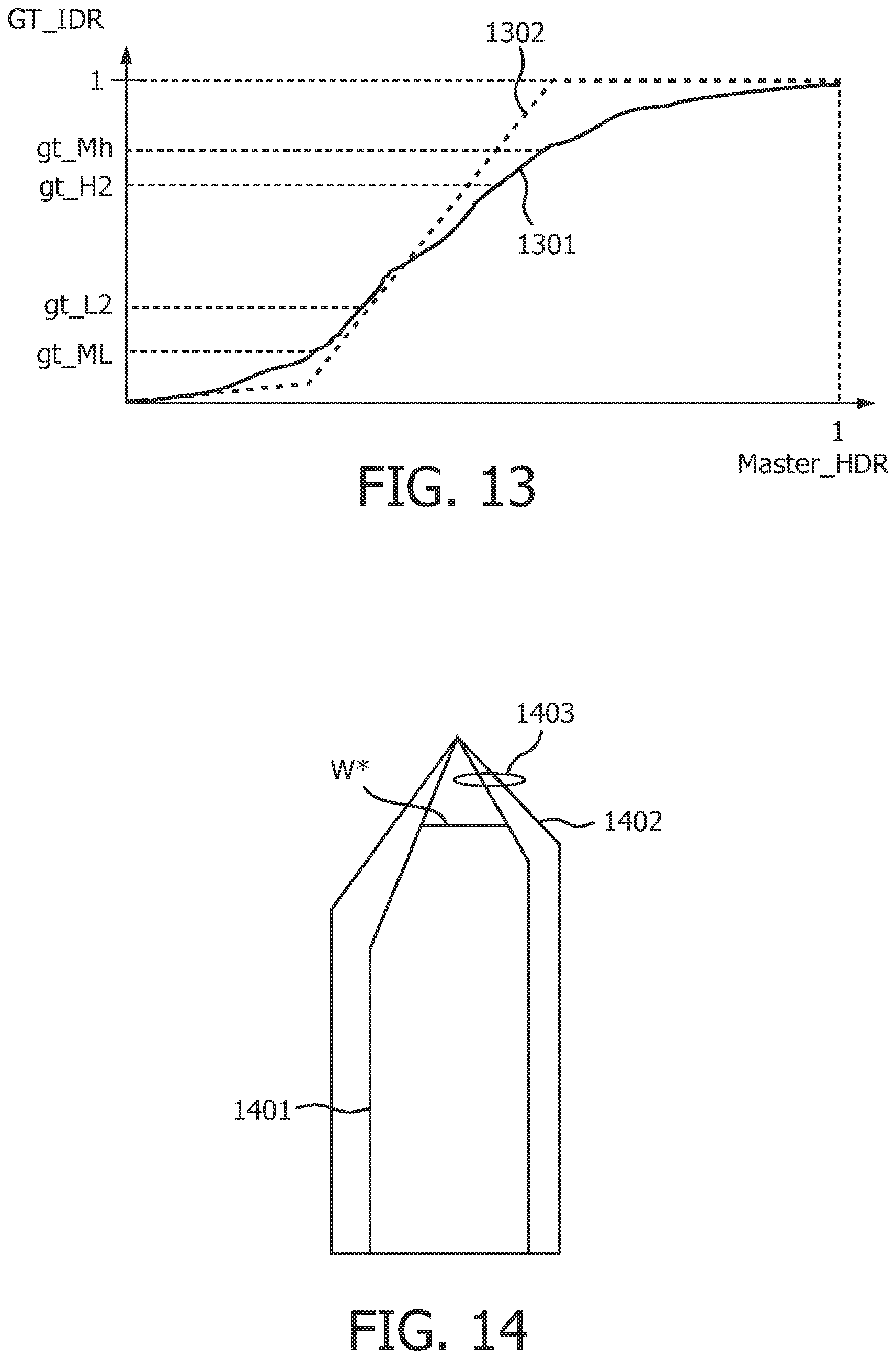 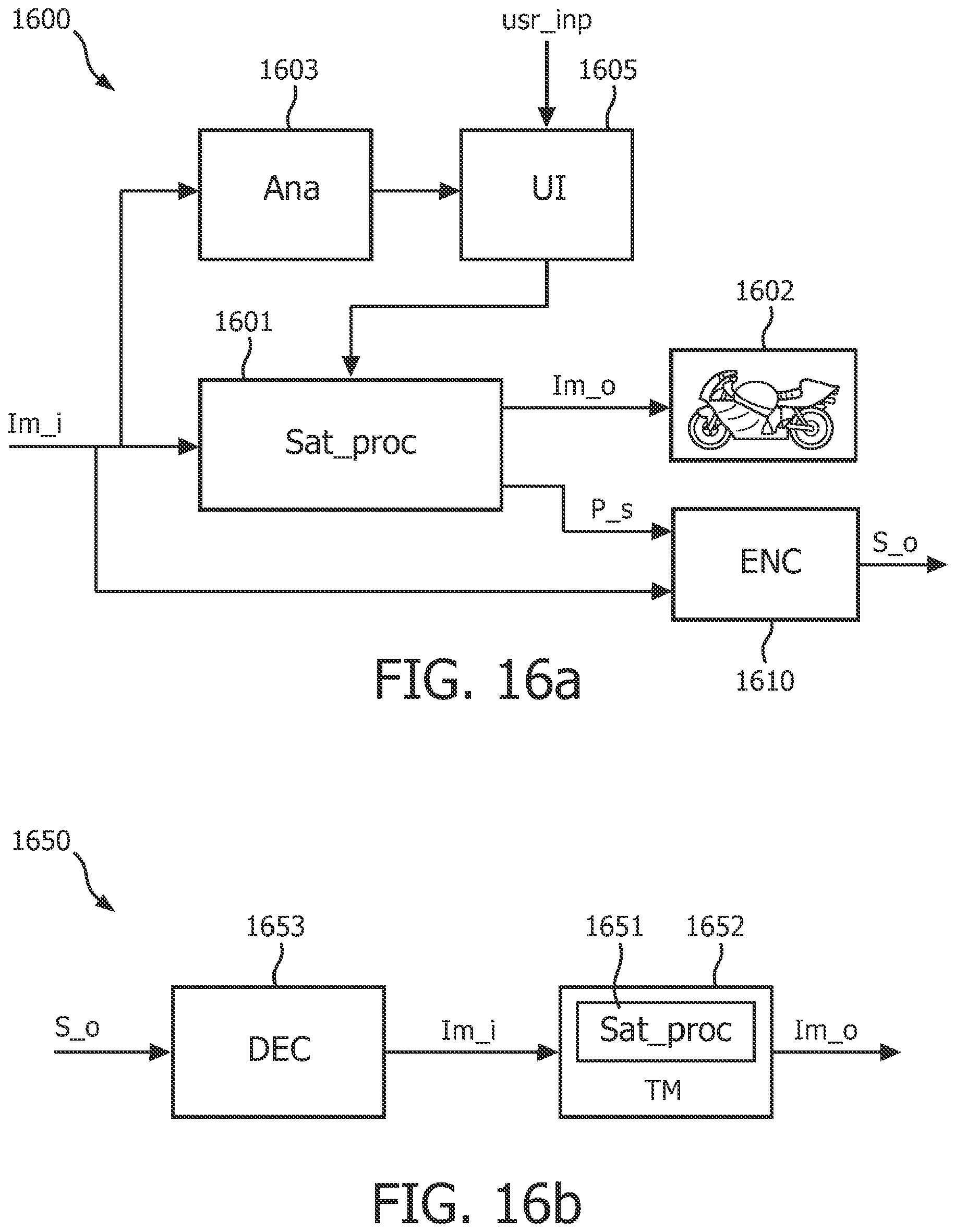