[0002] While there are numerous exercise activities that one may participate in, exercise may be broadly broken into the categories of aerobic exercise and anaerobic exercise. Aerobic exercise generally refers to activities that substantially increase the heart rate and respiration of the exerciser for an extended period of time. This type of exercise is generally directed to enhancing cardiovascular performance. Such exercise usually includes low or moderate resistance to the movement of the individual. For example, aerobic exercise includes activities such as walking, running, jogging, swimming or bicycling for extended distances and extended periods of time.
[0003] Anaerobic exercise generally refers to exercise that strengthens skeletal muscles and usually involves the flexing or contraction of targeted muscles through significant exertion during a relatively short period of time and/or through a relatively small number of repetitions. For example, anaerobic exercise includes activities such as weight training, push-ups, sit-ups, pull-ups or a series of short sprints.
[0004] When exercising at home or in a gym, aerobic and anaerobic exercise usually involves the use of different types of equipment. For example, aerobic exercise usually involves equipment such as treadmills, ellipticals and bicycles (traditional and stationary) while anaerobic exercise often involves the use of free weights, weight stacks, or other cable and pulley resistance-type systems.
[0005] Often, individuals will plan their work-out routines to include both aerobic and anaerobic activities. For example, a person may do anaerobic exercises (e.g., weight lifting and other strength training exercises) on two or three days of the week while doing aerobic exercising (e.g., running, bicycling) on the remaining days of the week. In other instances, an individual may do both aerobic and anaerobic activities during the same day.
[0006] One of the difficulties in integrating both aerobic and anaerobic activities is the ability of an individual to efficiently and effectively track their progress. For example, many individuals use aerobic exercise equipment such as a treadmill or an elliptical machine to automatically track the calories that they've burned while using such equipment. However, it is more difficult to track or calculate such information when doing strength training exercises.
[0007] A couple of examples of equipment that has tried to combine aerobic exercising with anaerobic exercising are described in US 5,527,245 A and US 7,740,563 A. These patents describe a resistance-type strength training apparatus combined with, in one instance, a treadmill, and in another instance an elliptical device.
[0008] Further, attention is drawn to US 2003/032535 A1 disclosing a magnetic control multifunctional exercise apparatus comprising a base frame, a seat pad, a back pad, two hollow supporting arms pivotably connected at the top thereof, a resisting arm pivotably connected at the front end thereof and a magnetic control resisting mechanism at the bottom thereof. A plurality of pulleys are utilized in combination with two ropes to connect with the supporting arms and the resisting arm so that the user can pull the ropes of the supporting arms or push the resisting arm. By means of the interconnection between the ropes, a flywheel of the magnetic control resisting mechanism will unidirectionally turn to achieve the expected magnetic resistance.
[0009] In view of the foregoing, it would be desirable to provide the ability to track one's progress during exercise in a manner that is applicable to both aerobic and anaerobic activities and which is simple and effective. Additionally, it is a general desire in the industry to provide exercise equipment with new features and enhanced performance.

[0010] In accordance with the present invention, a strength training apparatus and a method of conducting strength training as set forth in claims 1 and 8, respectively, is provided. Preferred embodiments of the invention are claimed in the dependent claims.

FIG. 1 is a perspective view of a strength training apparatus;

FIG. 2 is a first side view of the strength training apparatus shown in FIG. 1;

FIG. 3 is another side view of the strength training apparatus shown in FIG. 1;

FIGS. 4A and 4B show a side view and a rear view, respectively, of the apparatus shown in FIG. 1, including various components, when the apparatus is in a first state;

FIGS. 5A and 5B show a side view and a rear view, respectively, of the apparatus shown in FIG. 1, including various components, when the apparatus is in a second state;

[0012] Throughout the drawings, identical reference numbers designate similar, but not necessarily identical, elements.

BEST MODE(S) FOR CARRYING OUT THE INVENTION

[0026] During exercise, many individuals desire to focus on anaerobic strength training, or to integrate anaerobic strength training with aerobic work-outs. One of the difficulties in mixing both aerobic and anaerobic activities is the ability of an individual to efficiently and effectively track their progress. For example, many individuals use aerobic exercise equipment such as a treadmill, an elliptical machine or a pedometer to help track the calories that they've burned while using such equipment. However, it is more difficult to track or calculate such information when doing strength training type of exercises.
[0027] The exercise apparatus provided herein provides a strength training apparatus that enables a variety of exercises while also providing the ability to track the work performed by an individual during their exercise session. By positioning the adjustable arms at different locations relative to the tower, different types of exercises may be conducted. For example, due to the adjustability of the arms/pulleys, the exercise apparatus may be used to perform exercises including, but not limited to, standing abdominal crunches, curls and other bicep exercises, lat pull-downs, chest presses, incline and decline presses, overhead presses, triceps extensions, shoulder extensions, leg extensions, leg curls, abduction and adduction exercises, and a variety of other exercises, including variations of the examples provided.
[0028] Additionally, the use of a flywheel in connection with a strength training apparatus provides a different form of resistance than in conventional strength training exercises, one that can be measured, tracked and incorporated into a planned exercise routine. The flywheel, combined with a braking mechanism such as a magnetic brake, enables considerable flexibility in setting the desired resistance during exercise. In many conventional strength training exercises, the amount of resistance provided (e.g., by free weights, weight stacks or resistance bands) is only adjustable in set increments (e.g., 2.27 to 4.54 kg increments (5 or 10 pound increments)). The use of a flywheel with a variable resistance braking mechanism enables fine tuning of the resistance over a continuous spectrum between two defined limits.
[0029] The use of a torque sensor in conjunction with the flywheel enables the calculation of work, power or energy so that, for example, a user of the apparatus may determine their performance level while using the exercise apparatus. In one particular example, the power expended during an exercise session may be expressed in watts (i.e., joules/sec (J/s) or newton meters / sec (N*m/s). A user of the machine can review the power expended during an exercise session from a display (or other output device) associated with the exercise apparatus and then compare their performance to a goal or a benchmark.
[0030] Such a way of tracking the effort expended during an anaerobic exercise routine provides more insight into the progress of the individual than just the number of repetitions completed during a given work-out session. If desired, other units may be utilized to track the energy expended by an individual during a work-out session. For example, rather than expressing the work-out performance in terms of watts (units of power), it could be expressed in terms of joules (units of work).
[0031] This information could be used with information from other work-out activities, including aerobic exercise, to consistently monitor the performance of an individual over a desired period of time. For example, rather than expressing the performance of an individual on a treadmill or an elliptical machine in terms of calories, those performances may similarly be provided in terms of watts (or another selected unit) so that all types of exercise activity may be monitored uniformly. An individual may then customize their exercise routine based, for example, on the amount of work that is to be performed regardless of whether that work occurs during an aerobic or an anaerobic activity.
[0032] One example of customizing a work-out that may be utilized in conjunction with the exercise apparatus described herein is set forth in US 2013-0196821 A1. One particular example of tracking a work-out across various exercise equipment and which may be utilized in conjunction with the exercise apparatus described herein is set forth in US 6,746,371 A.

wherein displacement of either the first cable (116A) or the second cable (116B) by a user is configured to effect rotation of the flywheel (120);

characterised in that the apparatus (100) further comprises:

wherein the console (130) is in communication with the torque sensor (128) and is configured to calculate an amount of work expended by the user in displacement of the first cable (116A) and the second cable (116B) based at least in part on the measured torque;

wherein the console (130) is in communication with the braking mechanism (124);

wherein the at least one input device (132) is configured to control the amount of resistance applied to the flywheel (120) by the braking mechanism (124); and

wherein the at least one output device (134) is configured to provide an indication of the calculated amount of work expended by the user upon rotation of the flywheel (120).

2. The apparatus (100) of claim 1, wherein the at least one output device (134) provides the indication of the amount of work expended by the user in units of watts.

5. The apparatus (100) of claim 3, further comprising a drive chain (150) coupled with the cable and pulley system, wherein the drive chain (150) extends about a plurality of sprockets (154, 156) including at least one sprocket (156) that is displaceable relative to the tower structure (104).

6. The apparatus (100) of claim 5, further comprising at least one biasing member (160) coupled with the at least one displaceable sprocket (156).

7. The apparatus (100) of claim 1, wherein the first arm (108A) and the second arm (108B) are maintained in a fixed angular position relative to each other in which they continually extend in substantially opposite directions from each other.

8. A method of conducting strength training, the method comprising:

providing a strength training apparatus(100) according to anyone of the preceding claims;

applying a force to the first cable (116A) or the second cable (116B) and displacing the respective cable in a first direction;

effecting rotation of the flywheel (120) upon displacement of the respective cable;

applying a resistance to the flywheel (120) ;

measuring torque applied to the flywheel (120); and

calculating work performed, in watts, based at least in part on the measured torque. 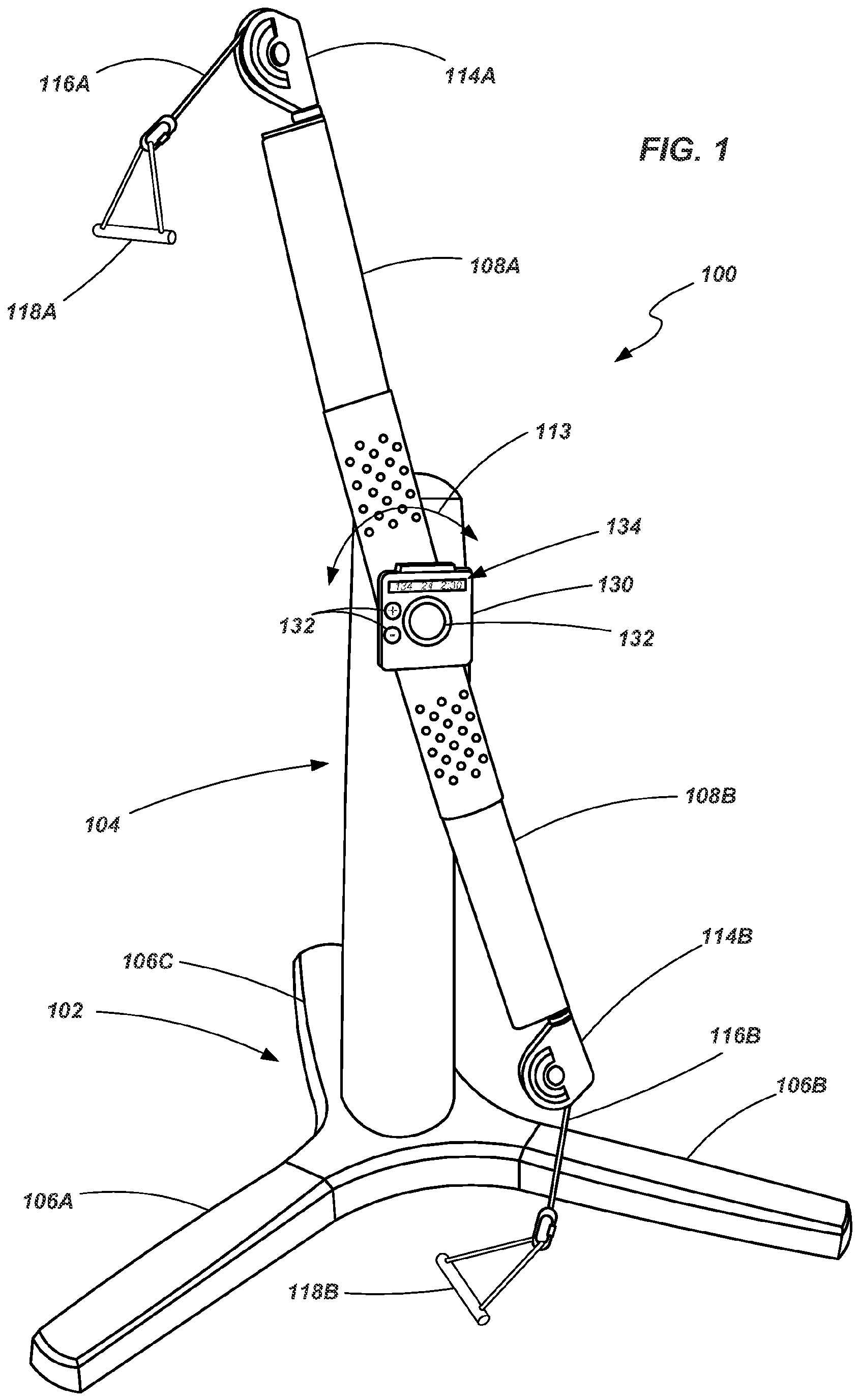 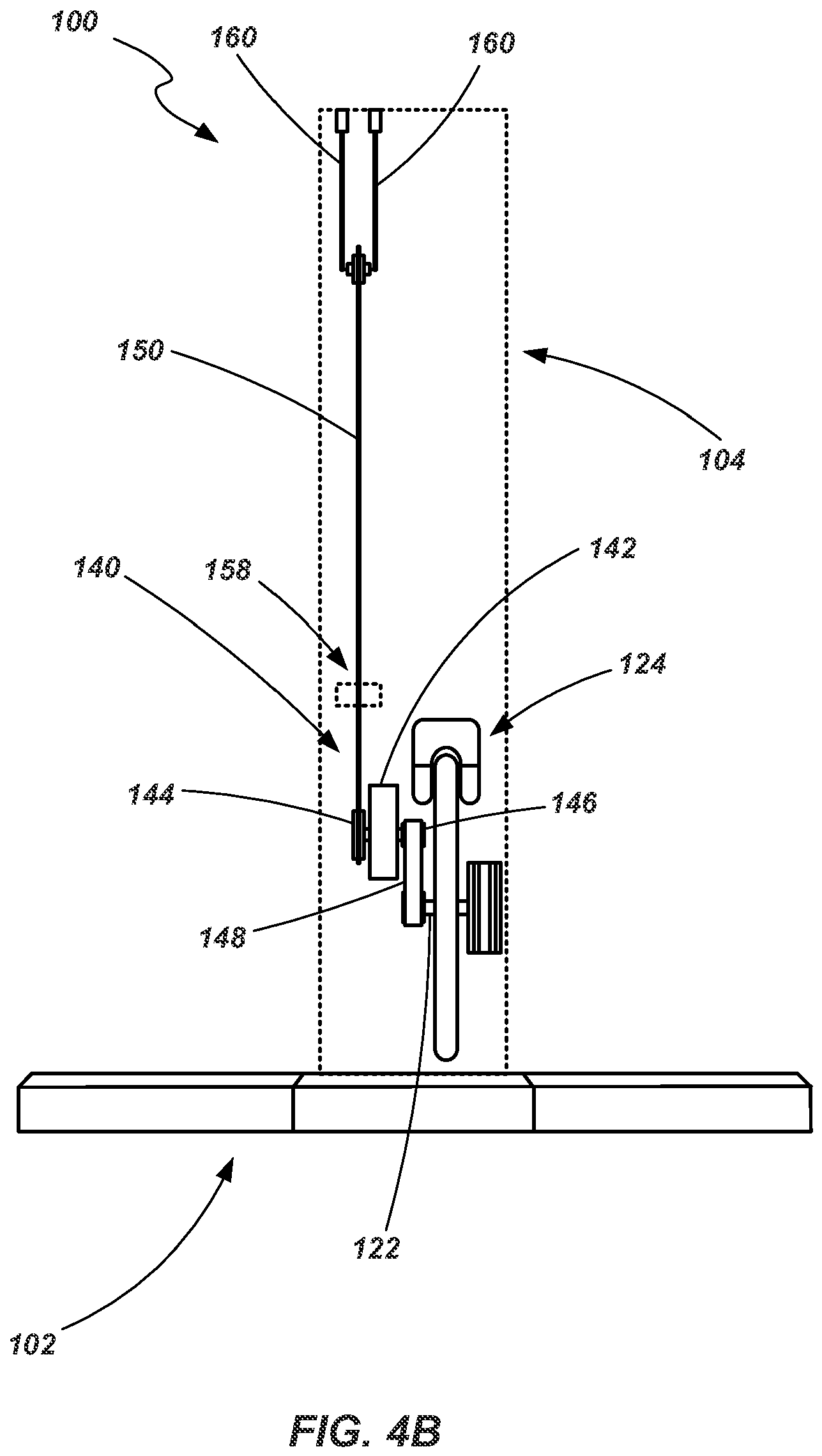 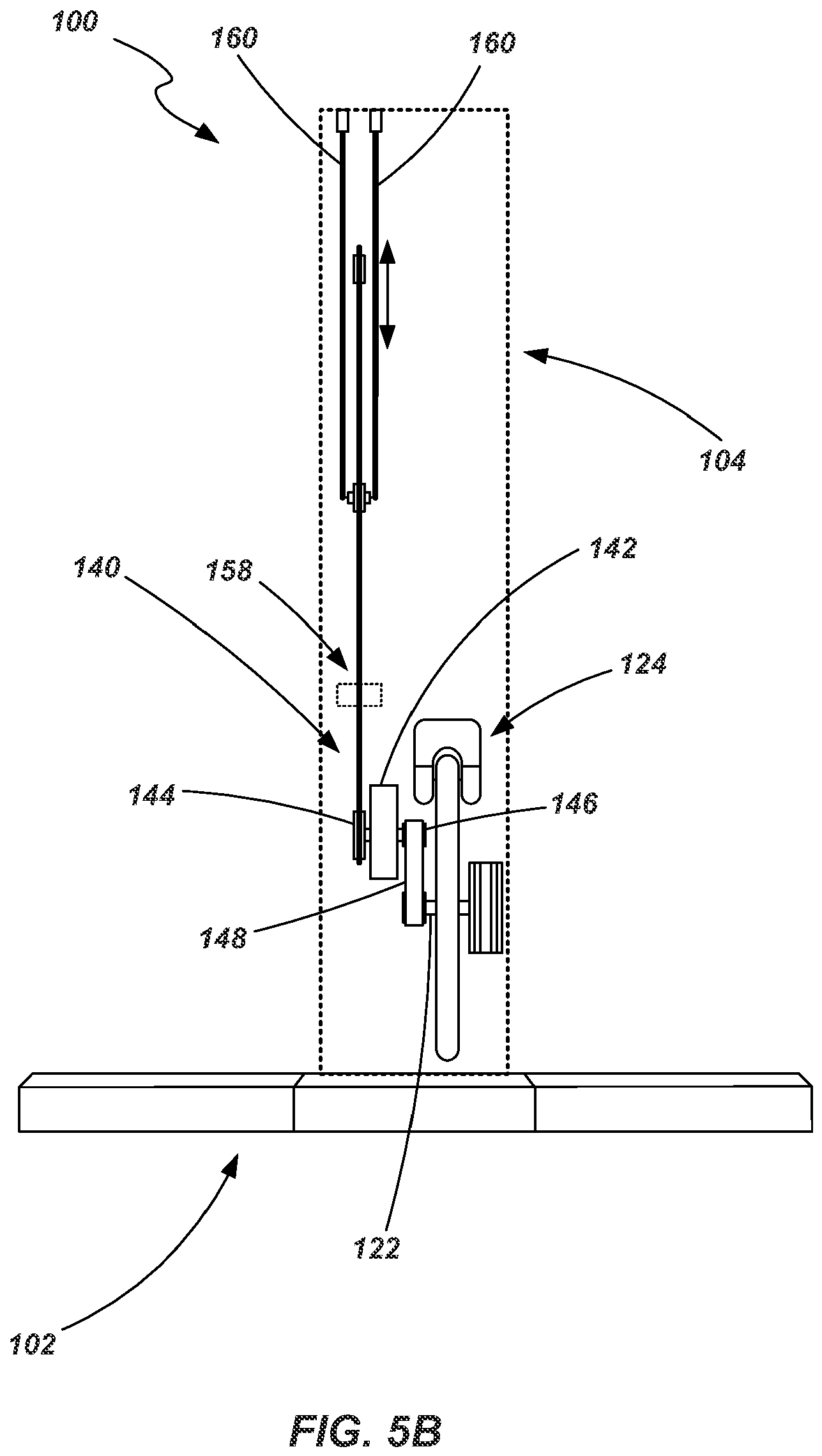