[0002] Fuel cells are devices that directly convert chemical energy of reactants, i.e., fuel and oxidant, into direct current (DC) electricity. In general, fuel cell technology includes a variety of different fuel cells, such as alkali fuel cells, polymer electrolyte fuel cells, phosphoric acid fuel cells, molten carbonate fuel cells, solid oxide fuel cells and enzyme fuel cells. Fuel cells generally run on hydrogen (H2) fuel, and they can also consume non pure hydrogen fuel. Non pure hydrogen fuel cells include direct oxidation fuel cells, such as direct methanol fuel cells (DMFC), which use methanol, or solid oxide fuel cells (SOFC), which use hydrocarbon at high temperature. Hydrogen fuel can be stored in compressed form or within compounds such as alcohols or hydrocarbons or other hydrogen containing materials that can be reformed or converted into hydrogen fuel and byproducts. Hydrogen can also be stored in chemical hydrides, such as sodium borohydride (NaBH4), that react with water or an alcohol to produce hydrogen and byproducts. Hydrogen can also be adsorbed or absorbed in metal hydrides, such as lanthanum pentanickel (LaNi5) at a first pressure and temperature and released to fuel a fuel cell at a second pressure and temperature.
[0003] Most hydrogen fuel cells have a proton exchange membrane or polymer electrolyte membrane (PEM), which allows the hydrogen's protons to pass through but forces the electrons to pass through an external circuit, which advantageously can be a cell phone, a personal digital assistant (PDA), a computer, a power tool or any device that uses electron flow or electrical current. The fuel cell reaction can be represented as follows:

[0004] Generally, the PEM is made from a polymer, such as Nafion® available from DuPont, which is a perfluorinated sulfonic acid polymer having a thickness in the range of about 0.05 mm to about 0.50 mm, or other suitable membranes. The anode is typically made from a Teflonized carbon paper support with a thin layer of catalyst, such as platinum-ruthenium, deposited thereon. The cathode is typically a gas diffusion electrode in which platinum particles are bonded to one side of the membrane.
[0005] For DMFC, the chemical-electrical reaction at each electrode and the overall reaction for a direct methanol fuel cell are described as follows:

DMFCs are discussed in U.S. Patent Nos. 4,390,603 and 4,828,941.
[0006] In a chemical metal hydride fuel cell, potassium or sodium borohydride is reformed and reacts as follows:
NaBH4 + 2H2O → (heat and/or catalyst) → 4(H2) + (NaBO2) Suitable catalysts for this reaction include platinum and ruthenium, and other metals. The hydrogen fuel produced from reforming sodium borohydride is reacted in the fuel cell with an oxidant, such as O2, to create electricity (or a flow of electrons) and water by-product, illustrated above. Sodium borate (NaBO2) by-product is also produced by the reforming process. A sodium borohydride fuel cell is discussed in U.S. Patent No. 4,261,956.
[0007] Pressure regulators and other fluidic flow control devices are needed to control or regulate the flow of fuel from fuel cartridges or fuel storages to fuel cell systems, fuel refilling devices and the devices that fuel cells powered. The known art discloses various pressure regulators and flow control devices. A need, however, exists for improved pressure regulators and flow control devices. To a certain extent, this need has been addressed by commonly owned U.S. patent no. 8,002,853 and its progenies, U.S. published patent application nos. 2010/0104481, 2011/0189574 and 2011/0212374. US 1762260 describes a constant ratio pressure reducing valve with a high pressure diaphragm and a low pressure diaphragm, which operates in response to the differential pressure on these diaphragms. A valve member is moved against and away from a seat by the diaphragms. The working areas of the diaphragms may be in any ratio desired to achieve a desired constant ratio pressure reduction. US 3525355 describes flow control apparatus having an external bleed path and an internal bleed path and wherein a main stream of flow is controlled in response to the pressure of the flow in the internal bleed path which flow is controlled in response to the pressure of the flow in the external bleed path. US 1132424 describes in a reducing valve, the combination of recessed rings fitting telescopically inside one another, lever supporting said rings, shoulders on said rings engaging the recesses in the adjacent rings, to lock said rings together when in the extreme downward position and prevent them from blowing out in case the supporting levers should break, and a valve spindle to which said levers are coupled. WO 2008/097849 A2 describes a hydrogen generator comprising a first fuel chamber containing a viscous fuel component, a second fuel chamber containing a metal hydride fuel component, wherein the viscous fuel component reacts with the metal hydride fuel component to produce hydrogen, wherein the hydrogen generator measures, transports or stores a single dose of the viscous fuel component when an internal hydrogen pressure of the hydrogen generator is higher than a first predetermined pressure, and transports said single dose to react with the metal hydride fuel component when said internal pressure is lower than a second predetermined pressure.

[0012] In the accompanying drawings, which form a part of the specification and are to be read in conjunction therewith and in which like reference numerals are used to indicate like parts in the various views:

Figure 1A is a cross-sectional view and Figure 1B is an exploded view illustrating the operating principles of a conventional pressure regulator shown and described in US 2010/0104481;

Figure 2A is a cross-sectional view and Figures 2b-2C are top views of an exemplary adjustable pressure regulator;

Figures 3A-3B are cross-sectional view of an adjustable pressure regulator of the present invention;

Figure 4 is a cross-sectional view of an adjustable piston or shuttle in another adjustable pressure regulator of the present invention;

Figures 5A-5B are cross-sectional view of another adjustable pressure regulator of the present invention;

Figures 6A-6B are cross-sectional view of another adjustable pressure regulator of the present invention;

Figures 8A-8B are cross-sectional view of another adjustable pressure regulator of the present invention;

Figures 9A-9B are cross-sectional view of pressure regulators with an inlet restrictor of the present invention;

Figures 12A-12B are cross-sectional views of a semi-automatic valve of the present invention;

Figures 14A-14B are cross-sectional views of a pressure regulator with a by-pass valve of the present invention; and

[0013] As illustrated in the accompanying drawings and discussed in detail below, the present invention is directed to fluidic components and fluid flow control components that are used in fuel cell systems with fuel cells, interface systems and fuel cartridges or fuel tanks/storages. These components can also be used in or with other technologies and industries and are not limited to fuel cell systems.
[0014] Fuel cell fuels include any fuel that can be used with any fuel cells and can be solid, liquid and gaseous fuels or combinations thereof. Liquid fuels include methanol, water, methanol/water mixture, methanol/water mixtures of varying concentrations, pure methanol, and/or methyl clathrates, ethanol or other alcohols. Solid reactive fuel cell fuels include chemical metal hydrides, such as sodium borohydrides, potassium borohydrides and other metal hydrides that react with a liquid or gel to produce hydrogen. Solid fuels can also include metal hydrides that absorb and adsorb hydrogen within the hydride's matrix at a certain temperature and pressure and release hydrogen to fuel the fuel cells at another temperature and pressure. Suitable metal hydrides, including but not limited to lanthanum pentanickel (LaNi5) and the metal hydrides disclosed in U.S. Pat. Appl. Pub. No. US 2009/0060833.
[0015] Fuels can further include hydrocarbon fuels, which include, but are not limited to, butane, kerosene, alcohol, and natural gas, as set forth in U.S. Pat. Appl. Pub. No. US 2003/0096 150, entitled "Liquid Hereto-Interface Fuel Cell Device," published on May 22, 2003. Fuels can also include liquid oxidants that react with fuels and liquid electrolyte. The present invention is therefore not limited to any type of fuels, activators, electrolytic solutions, oxidant solutions or liquids or solids contained in the supply or otherwise used by the fuel cell system. The term "fuel" as used herein includes all fuels that can be reacted in fuel cells or stored in the fuel supply, and includes, but is not limited to, all of the above suitable fuels, electrolytic solutions, oxidant solutions, gaseous, liquids, solids, and/or chemicals including additives and catalysts and mixtures thereof.
[0016] Conventional fluidic control components such as conventional pressure regulators are described in a plurality of sources. One example of pressure regulators, discussed as Figures 18A-B in commonly owned US 2010/0104481, is illustrated in Figures 1A-1B to discuss the principles of operations of pressure regulators.
[0017] One application for such a pressure regulator is to reduce the pressure of the hydrogen exiting a hydrogen storage or a hydrogen generator. Such a regulator can be positioned downstream or upstream of a shut-off valve of a hydrogen storage or generator, and can be positioned adjacent therewith. An exemplary pressure regulator 164 is illustrated in FIGS. 1A-1B. Regulator 164 comprises inlet housing 166, outlet housing 168 and retainer 170 disposed therebetween. Movably disposed within retainer or shuttle housing 170 is shuttle 172. A first diaphragm 174 is clamped between inlet housing 166 and shuttle housing 170 and a second diaphragm 176 is clamped between outlet housing 168 and shuttle housing 170. Inlet housing 166 defines inlet channel 178 and outlet housing 168 defines outlet channel 180. The interior of retainer or shuttle housing 170, where shuttle 172 is housed, can be and is preferably exposed to a reference pressure, which may be atmospheric pressure. An optional ball 182 can be provided below first diaphragm 174 directly below inlet channel 178 to help seal the inlet channel. Ball 182 can be used with any of the pressure regulators described herein. As shown, first diaphragm 174 is exposed to the inlet pressure and second diaphragm 176 is exposed to the outlet pressure. Shuttle housing 170 is preferably in fluid communication with a reference pressure, Pref, such as atmospheric pressure.
[0018] Since the applied forces on shuttle 172 are the products of the applied pressure times the area exposed to that pressure, the forces acting on shuttle 172 can be summarized as follows:

The inlet diaphragm forces are:

The outlet diaphragm forces are:

[0021] For the case where the reference pressure is 0 psi relative or 1 atmosphere:

the pressure regulator further comprising a movable member (216) connected to the shuttle housing (170), characterized in that:

said movable member (216) is movable to contact the high pressure diaphragm (174), to determine an area of said contacted diaphragm (174) that can flex; and

the movable member (216) has a shape of a circular ring and is adjustable to change an outlet pressure of the pressure regulator (164, 200). 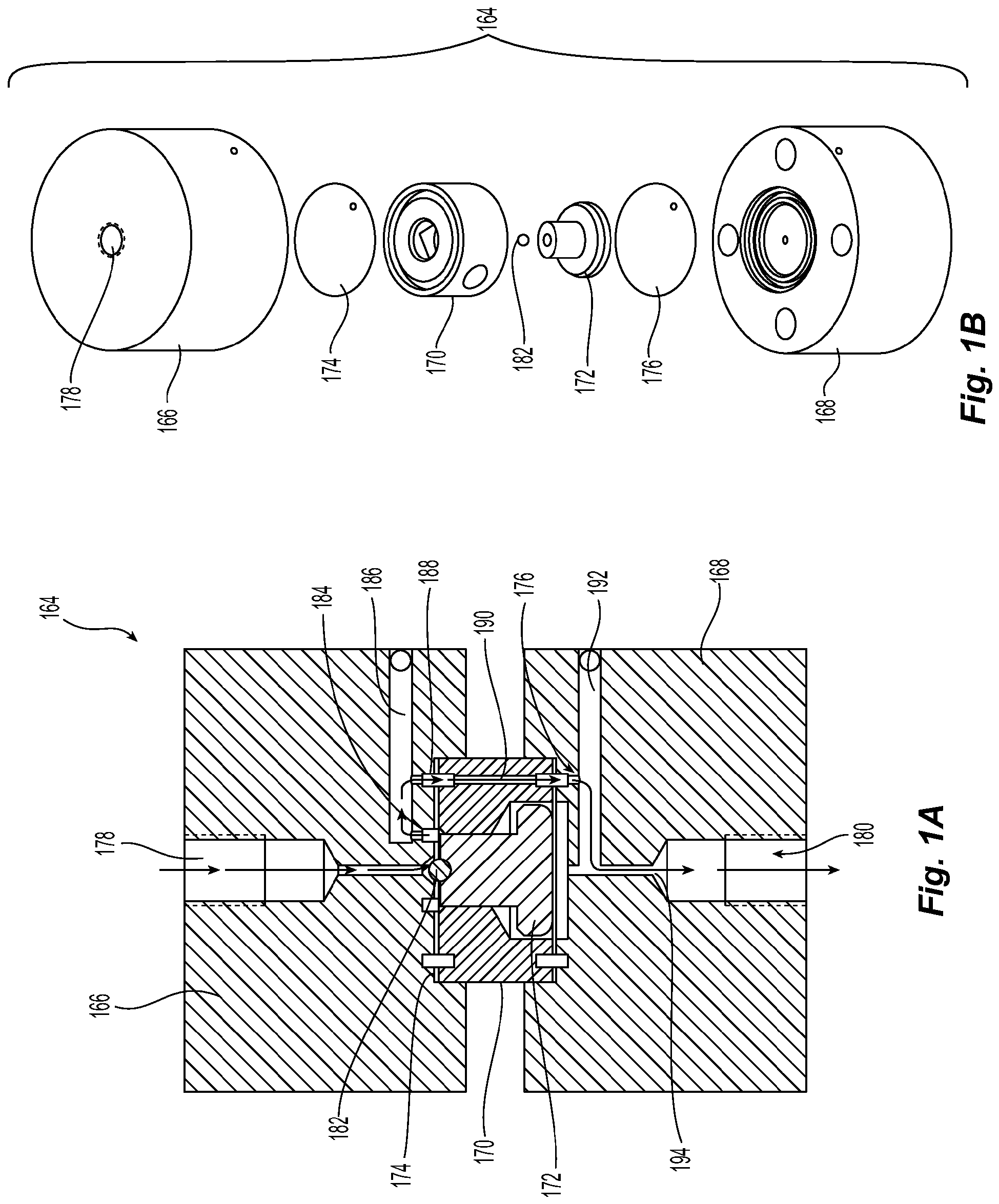 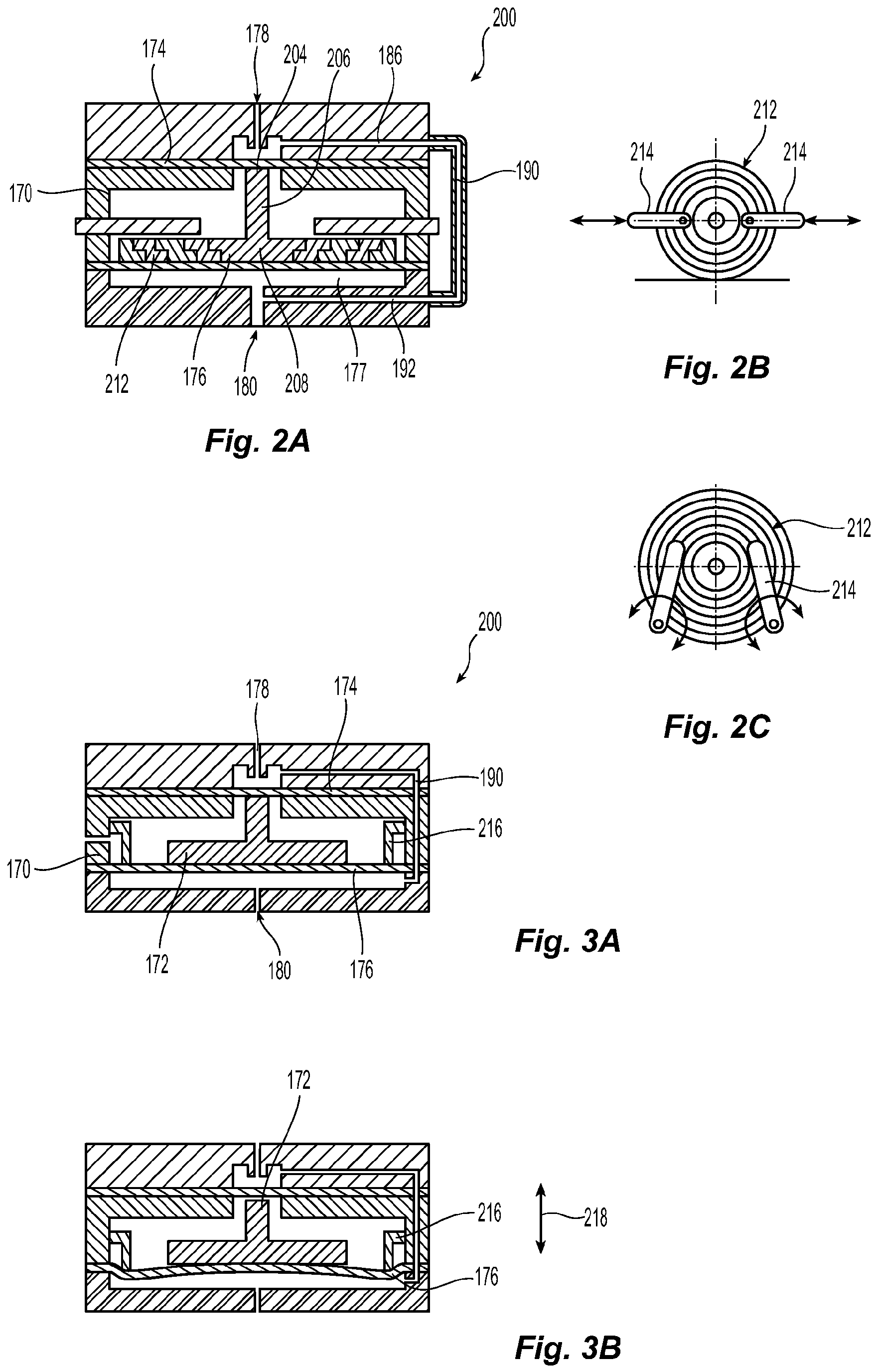 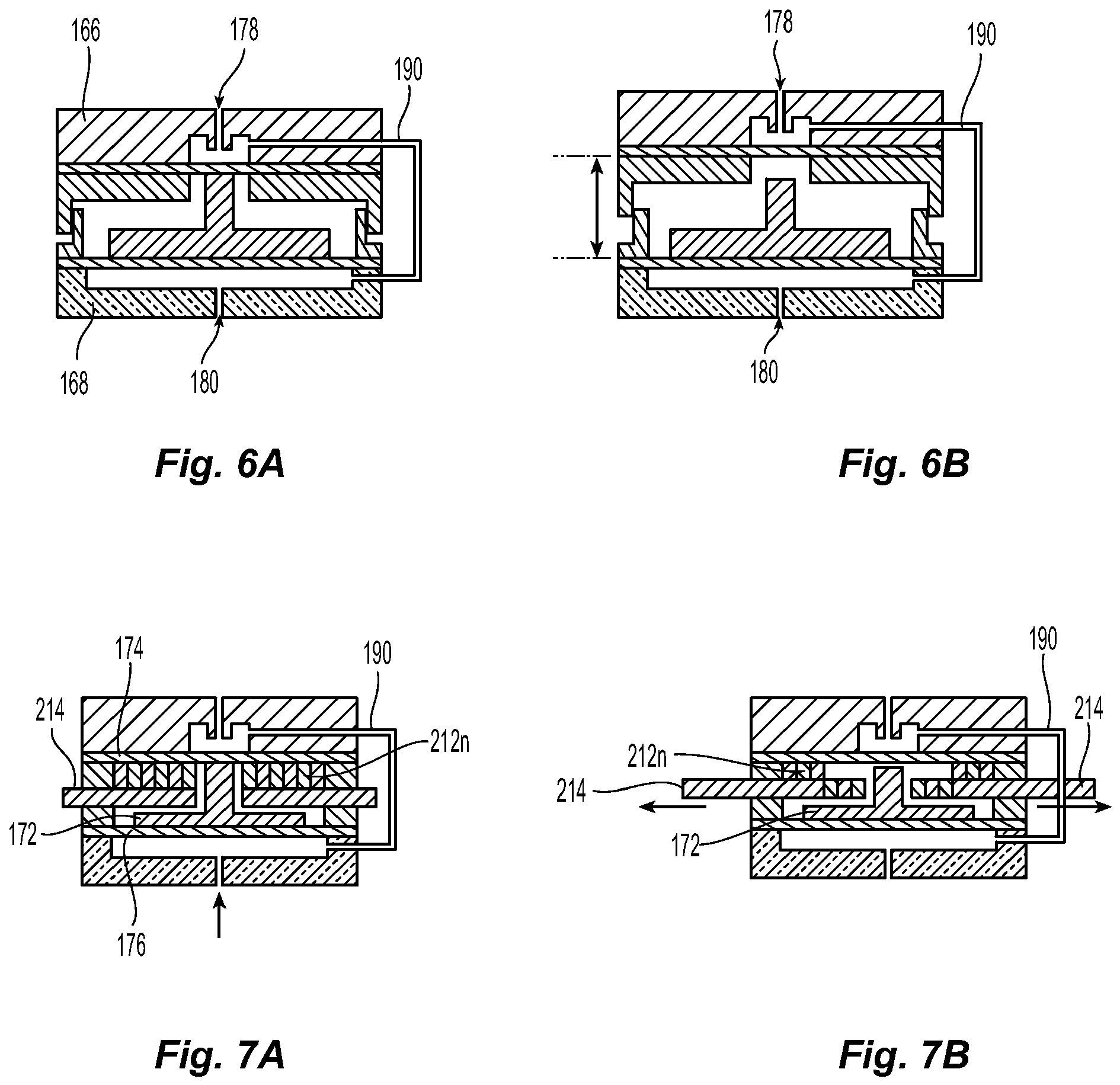 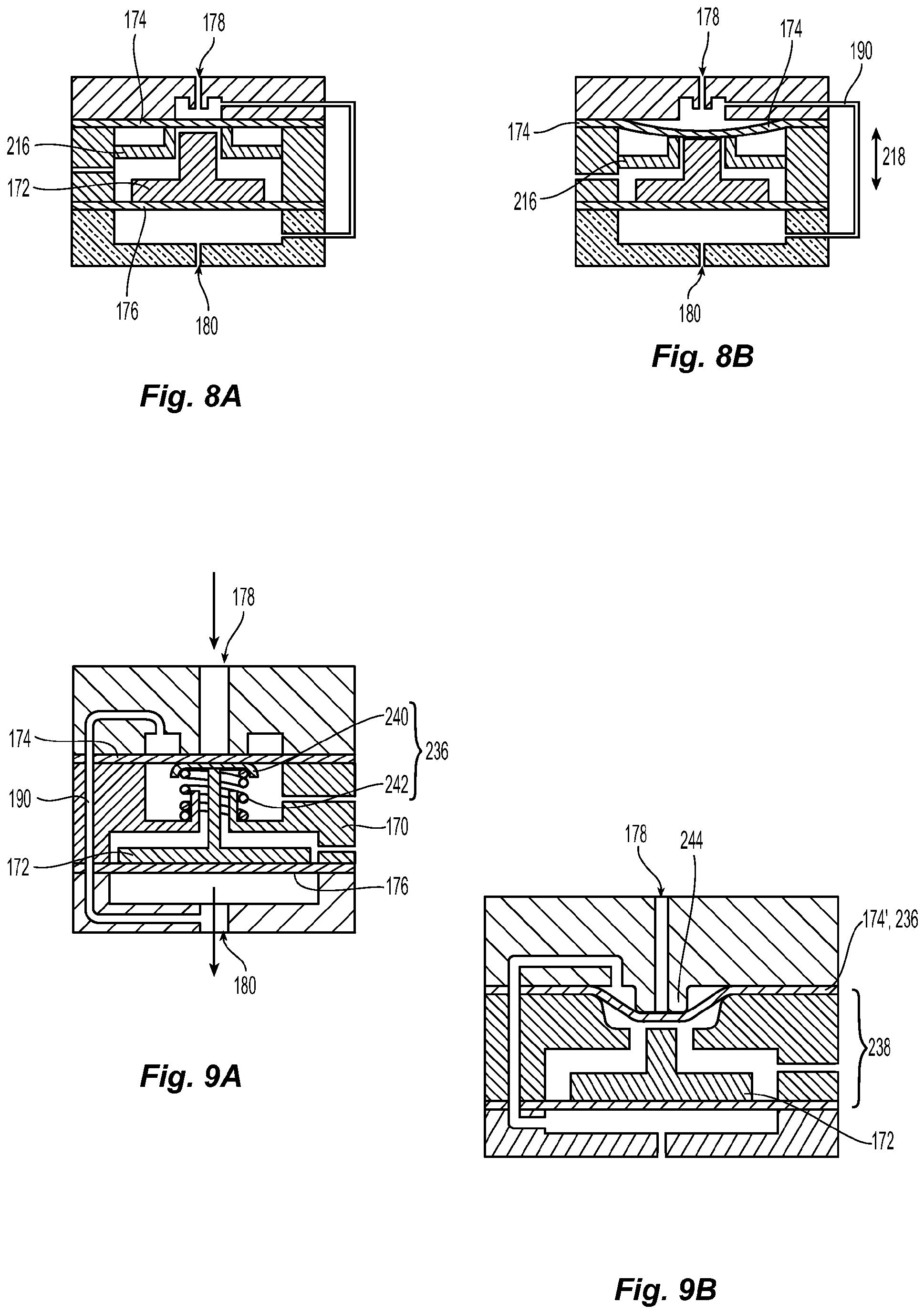 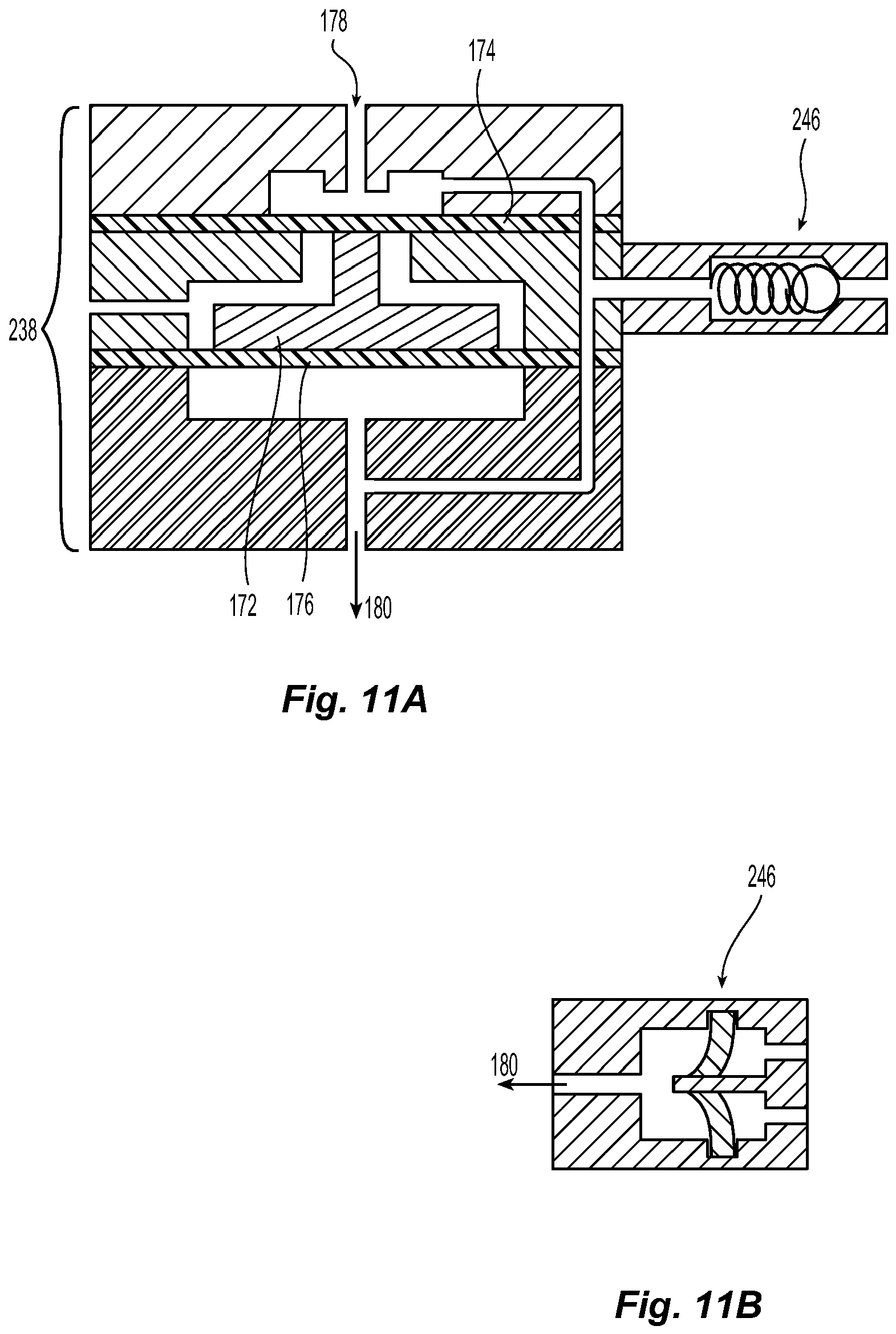 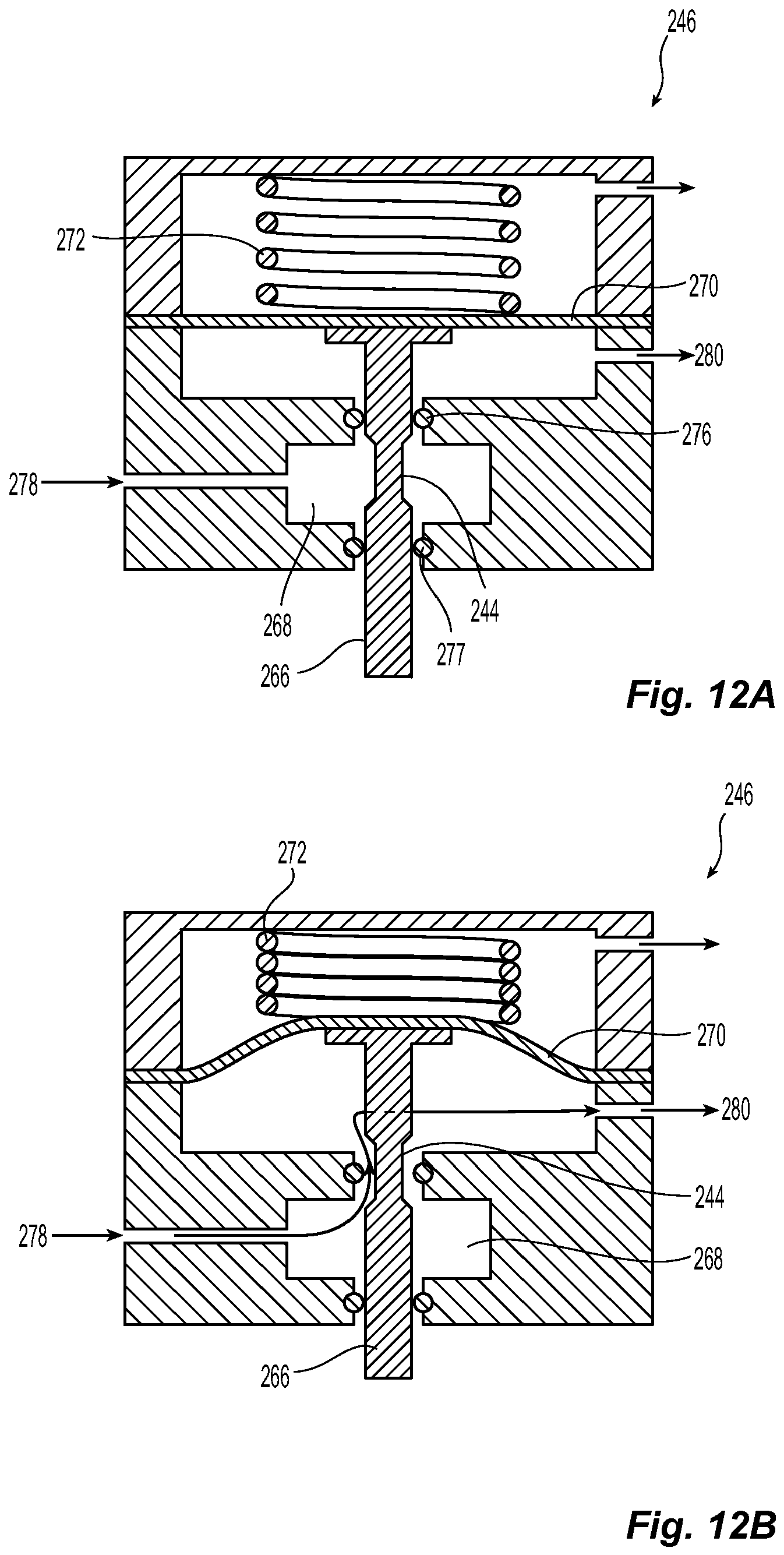 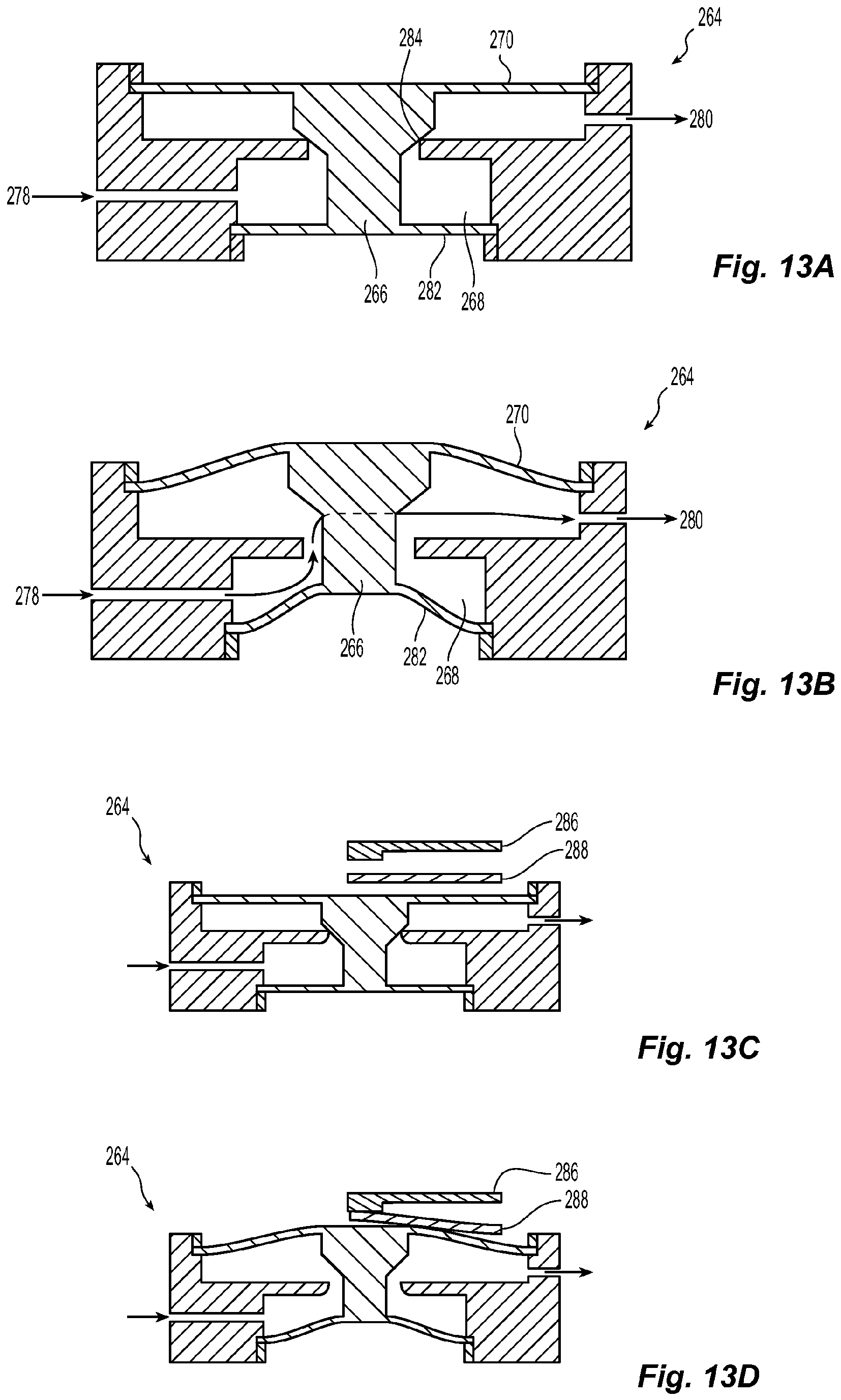 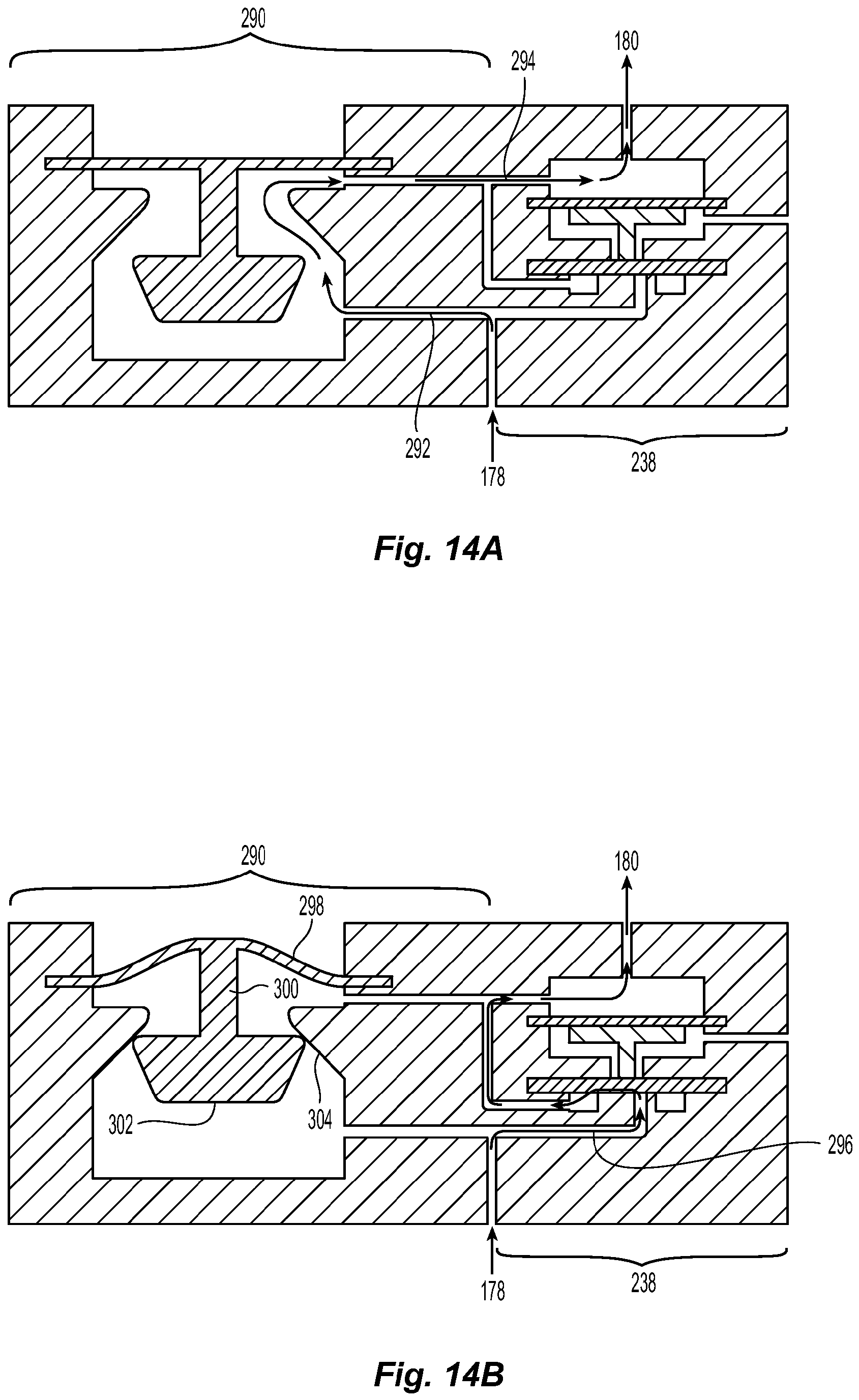 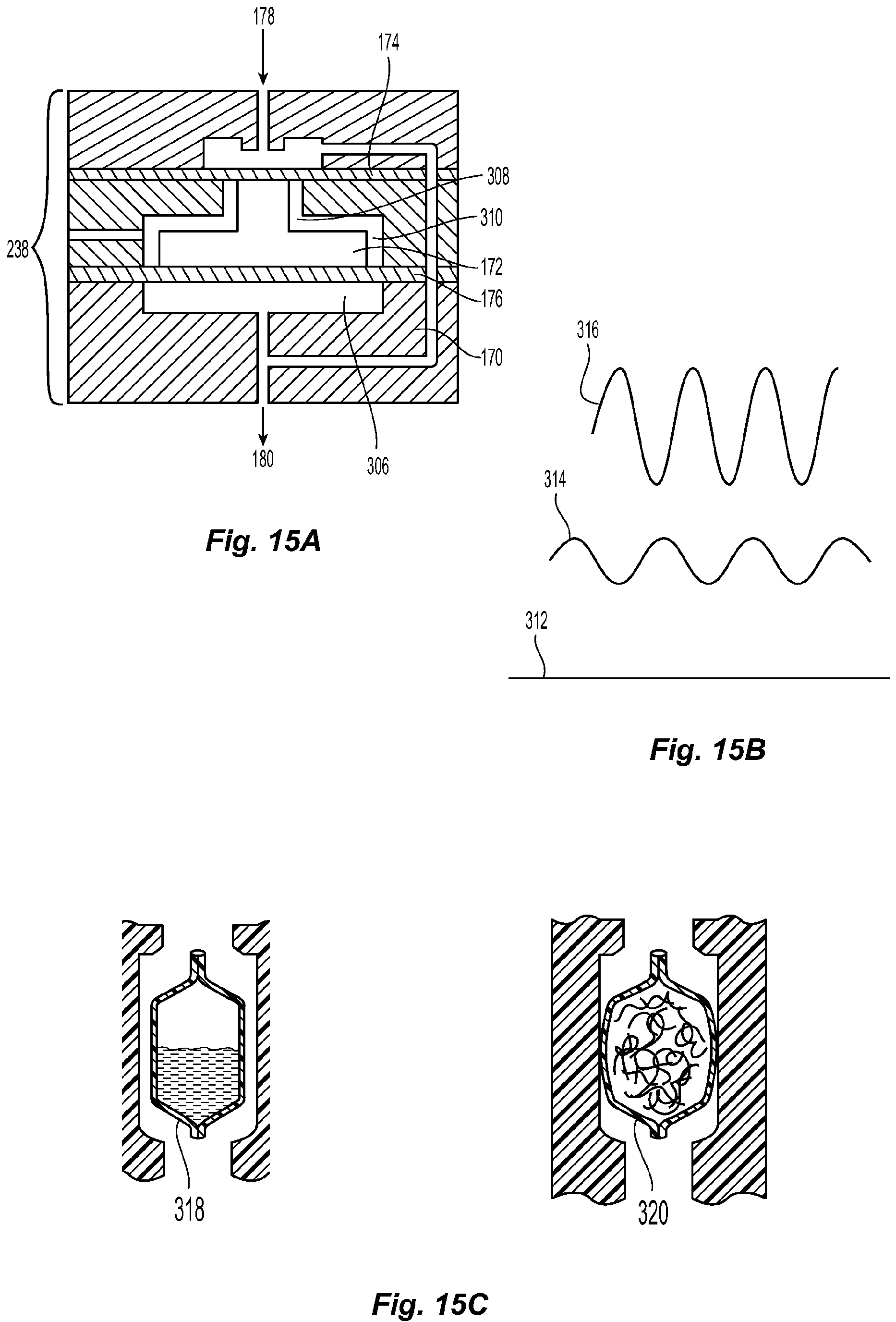