[0001] This patent relates to the field of information systems and data mining, and more particularly to a method for aggregating data by considering both the input and output properties of the data.
[0002] There has been an explosive growth in the amount of available data in the last decade. The fast growth pace has far outstripped the growth of experts who are able to analyze this data. Hence, there is a growing demand for automated tools for data analysis. One way of analyzing data is to cluster the data. Clustering consolidates information in the data for abstraction, compactness, removal of redundant information, etc. While there are hundreds of approaches to clustering available in textbooks and commercial solutions, most methods are only concerned with homogenous data types (variables). A few methods that can cluster heterogeneous data types produce clusters with heterogeneous variables in the same cluster. Some data processing applications, such as dimensionality reduction, are designed to work with data clusters with homogeneous data.
Beeferman D. and Berger A. "Agglomerative clustering of a search engine query log" discloses a technique for mining a collection of user transactions with an Internet search engine to discover clusters of similar queries and similar URLs. The exploited information is "clickthrough data": each record consists of a user's query to a search engine along with the URL which the user selected from among the candidates offered by the search engine. By viewing this dataset as a bipartite graph, with the vertices on one side corresponding to queries and on the other side to URLs, one can apply an agglomerative clustering algorithm to the graph's vertices to identify related queries and URLs. One noteworthy feature of the proposed algorithm is that it is "content-ignorant", the algorithm makes no use of the actual content of the queries or URLs, but only how they co-occur within the clickthrough data. The articles describes how to enlist the discovered clusters to assist users in web search, and measure the effectiveness of the discovered clusters in the Lycos search engine.
US 2009/259642 discloses that in a question answering system, the system identifies a type of question input by a user. The system then generates answer summaries that summarize answers to the input question in a format that is determined based on the type of question asked by the user. The answer summaries are output, in the corresponding format, in answer to the input question.
"Query clustering using user logs", ACM TRANSACTIONS ON INFORMATION SYSTEMS discloses that query clustering is a process used to discover frequently asked questions or most popular topics on a search engine. This process is crucial for search engines based on question-answering. Because of the short lengths of queries, approaches based on keywords are not suitable for query clustering. The paper describes a new query clustering method that makes use of user logs which allow to identify the documents the users have selected for a query. The similarity between two queries may be deduced from the common documents the users selected for them. It was shown experimentally that a combination of both keywords and user logs is better than using either method alone.
[0003] It would be desirable to have a method of clustering heterogeneous data types in order to produce clusters such that within each cluster the data types are homogeneous.

[0014] The above mentioned and other features and objects of this invention, and the manner of attaining them, will become more apparent and the invention itself will be better understood by reference to the following description of embodiments of the invention taken in conjunction with the accompanying drawings, wherein:

FIG. 1 illustrates a top level overview of an exemplary interactive electronic data gathering system that remotely administers questionnaires, in this embodiment to remotely monitor chronically ill patients, and the system can use data clustering algorithms to help with analyzing the gathered data;

FIG. 2 shows an exemplary set of question and response data from a session of the medical monitoring system of Figure 1;

FIG. 4 illustrates an exemplary document versus word matrix that can be used in determining textual similarity;

FIG. 5 shows an exemplary top-level flow diagram that can be used by a document clustering system;

FIG. 6 shows an exemplary hierarchical tree of clusters including a root node, leaf nodes and several intermediate nodes between the root node and the leaf nodes;

FIG. 7 shows a forest of sub-trees selected from the cluster tree of Figure 6 when using a preselected similarity threshold;

FIG. 9 is a flow chart illustrating an exemplary mode of operation of a system utilizing a method for clustering data in input and output spaces;

FIG. 10 illustrates an exemplary operating environment comprising several computer systems that are coupled together through a network; and

Question 2: How are you?

Question 3: What is your blood pressure today?

Question 4: What is today's blood pressure?

Question 1: What is your blood sugar?

Question 3: Is your blood sugar too high?

1. A computer automated method of clustering a plurality of documents, each document including question information data and answer information data, the method comprising:

reading the question information data of each document from memory or storage;

computing a question information similarity measure between each document and other documents of the plurality of documents using a computing device;

aggregating the documents into a first plurality of clusters based on the question information similarity measure;

reading the answer information data of the documents in the current cluster of the first plurality of clusters;

determining an answer information type for each of the plurality of documents in the cluster using the computing device; and

maintaining or subdividing the current cluster in the first plurality of clusters based on the answer information type,

characterised in that maintaining or subdividing the current cluster based on the answer information type comprises:

retrieving a stop-words list from memory or storage; and

stripping away words from the question information data of each document using the stop-words list prior to generating the document versus word matrix.

5. The method of claim 1, wherein aggregating the documents into a first plurality of clusters comprises:

computing a node similarity measure for each node of the hierarchical tree; 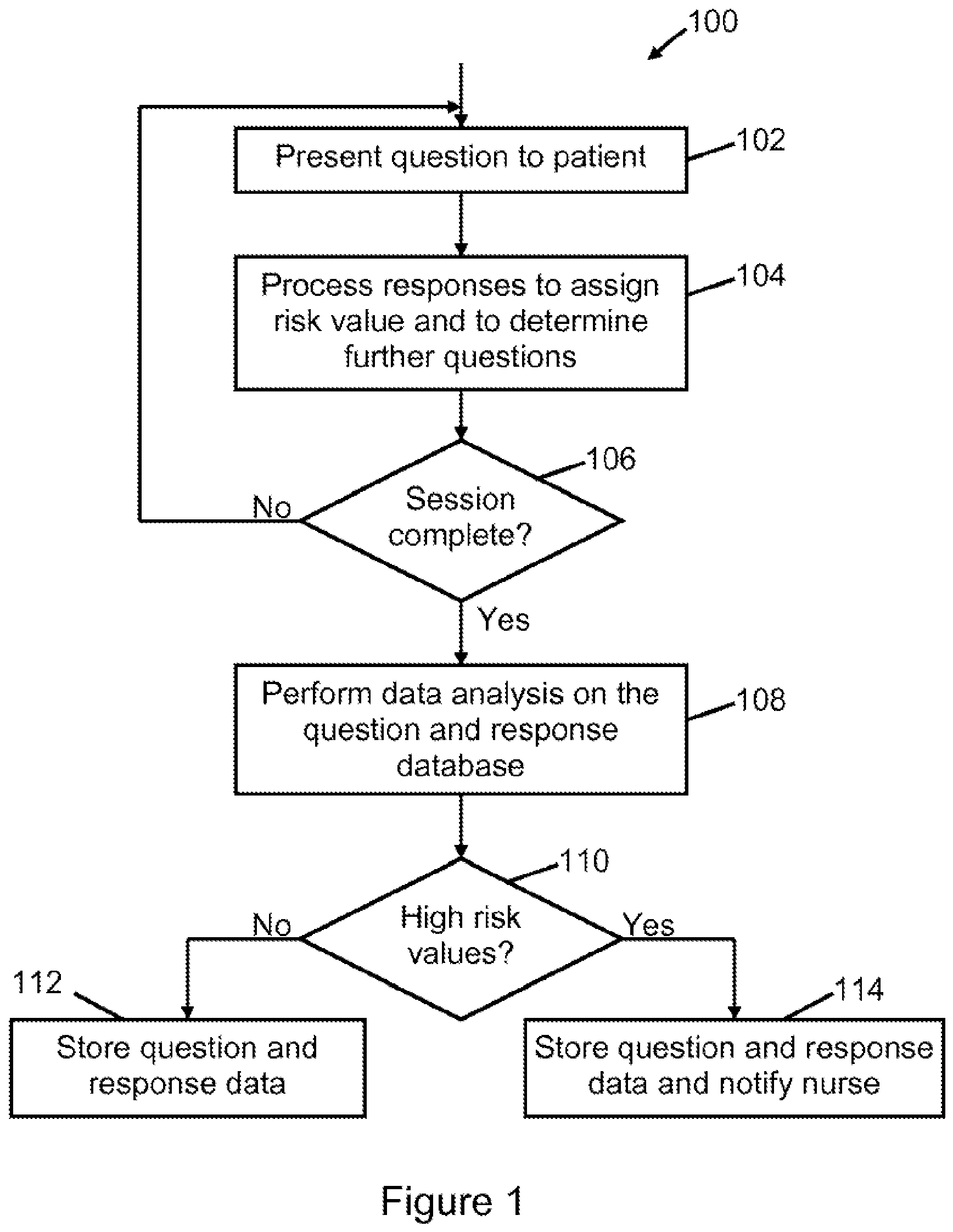 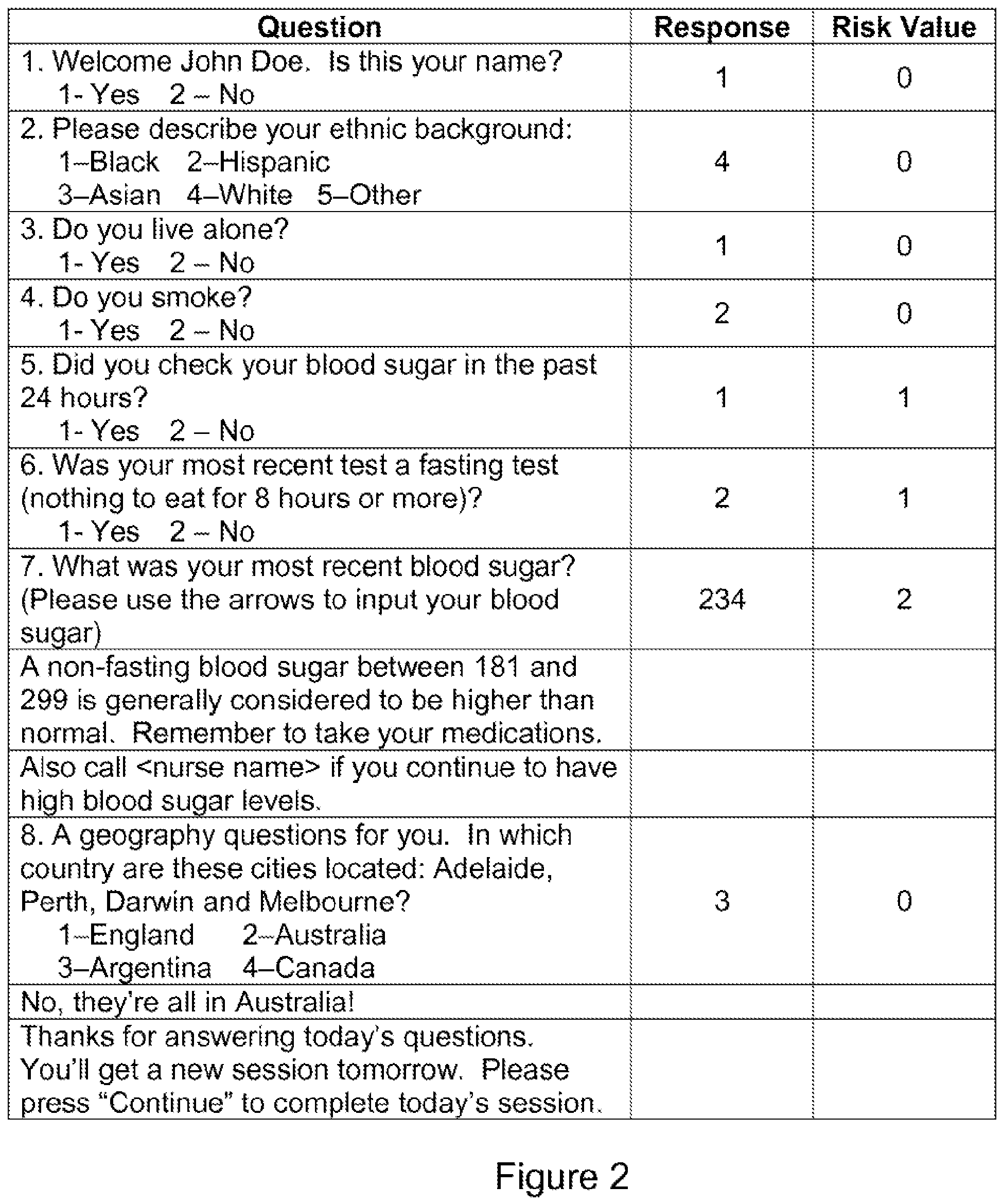 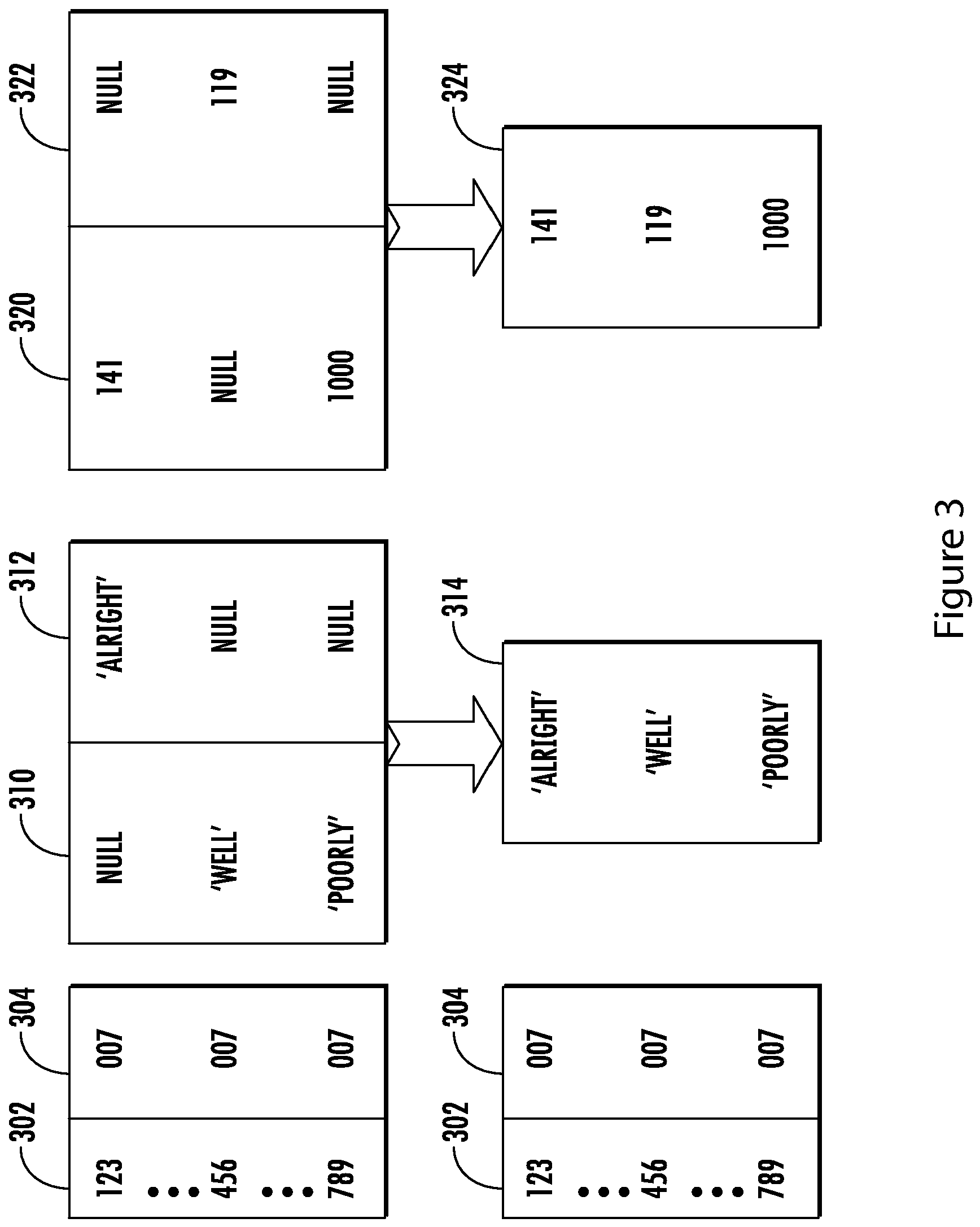 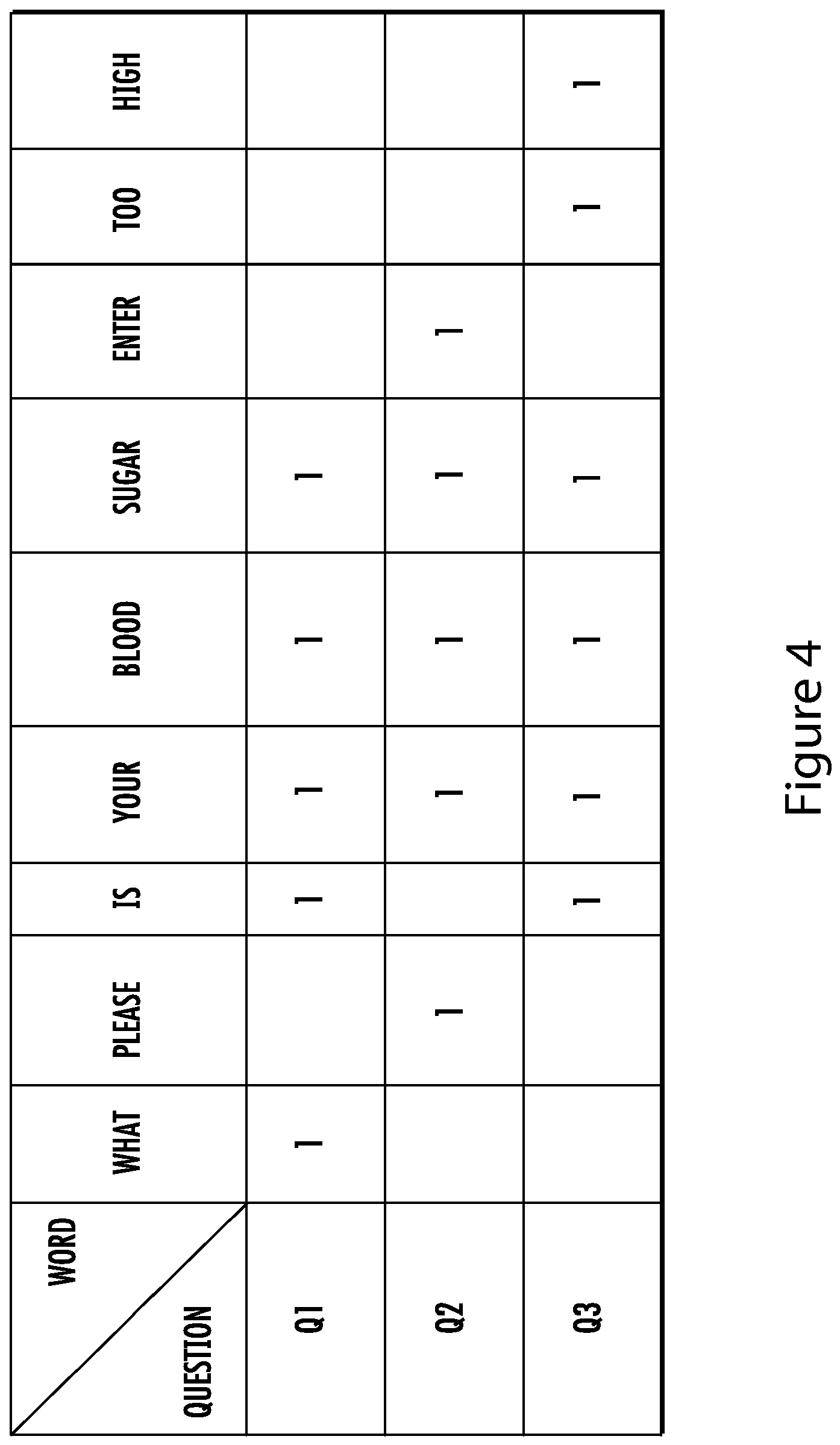 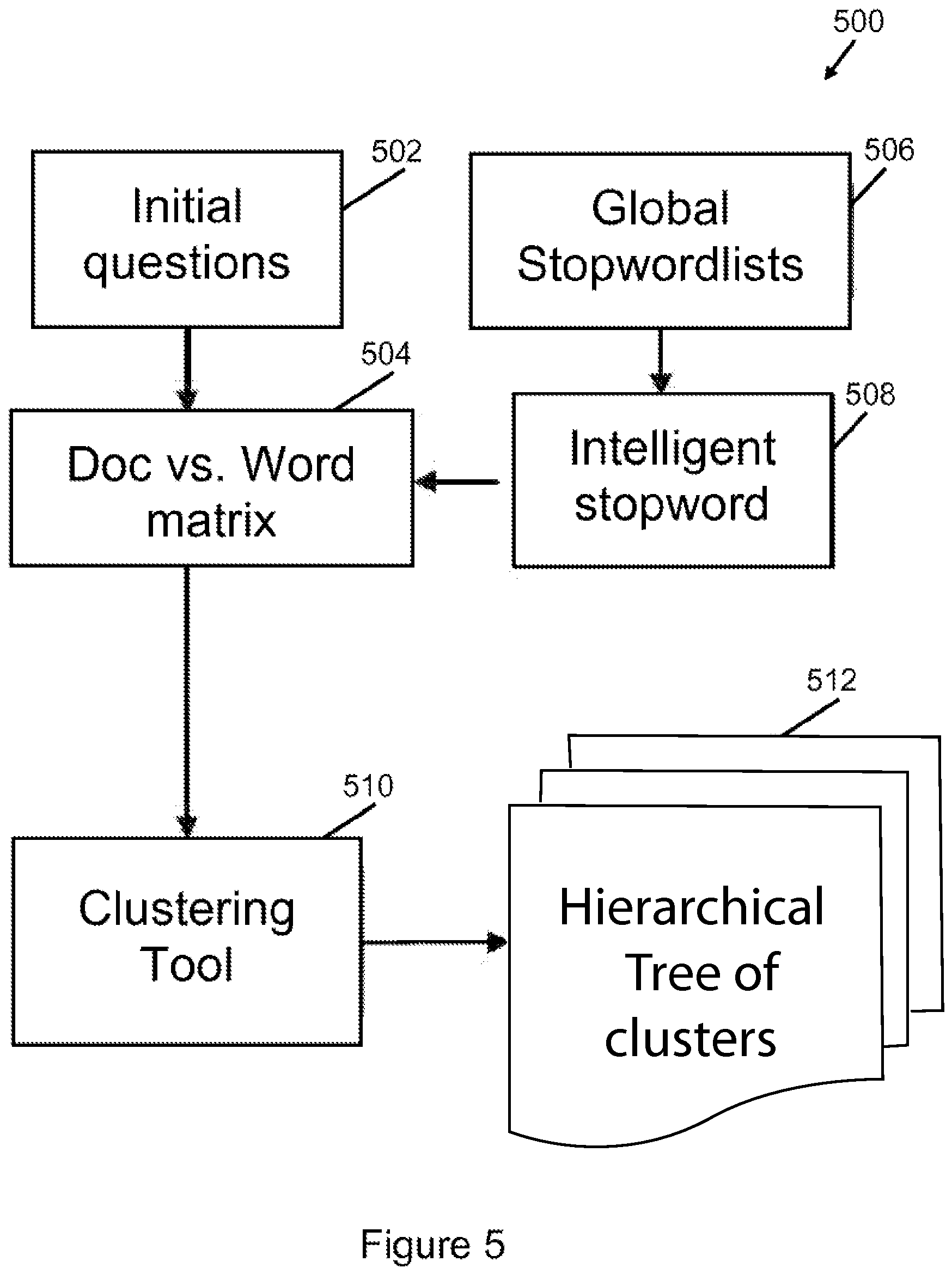 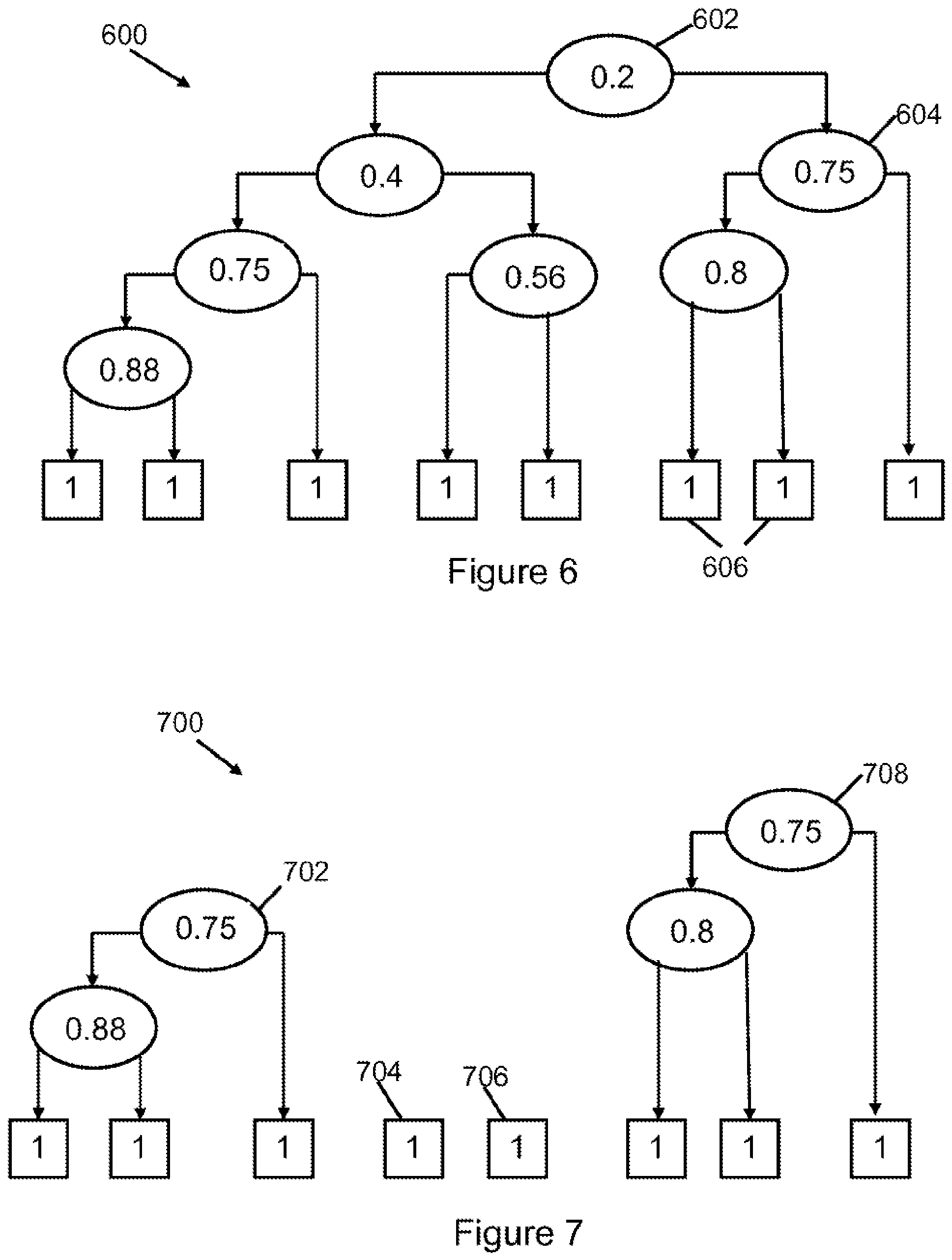 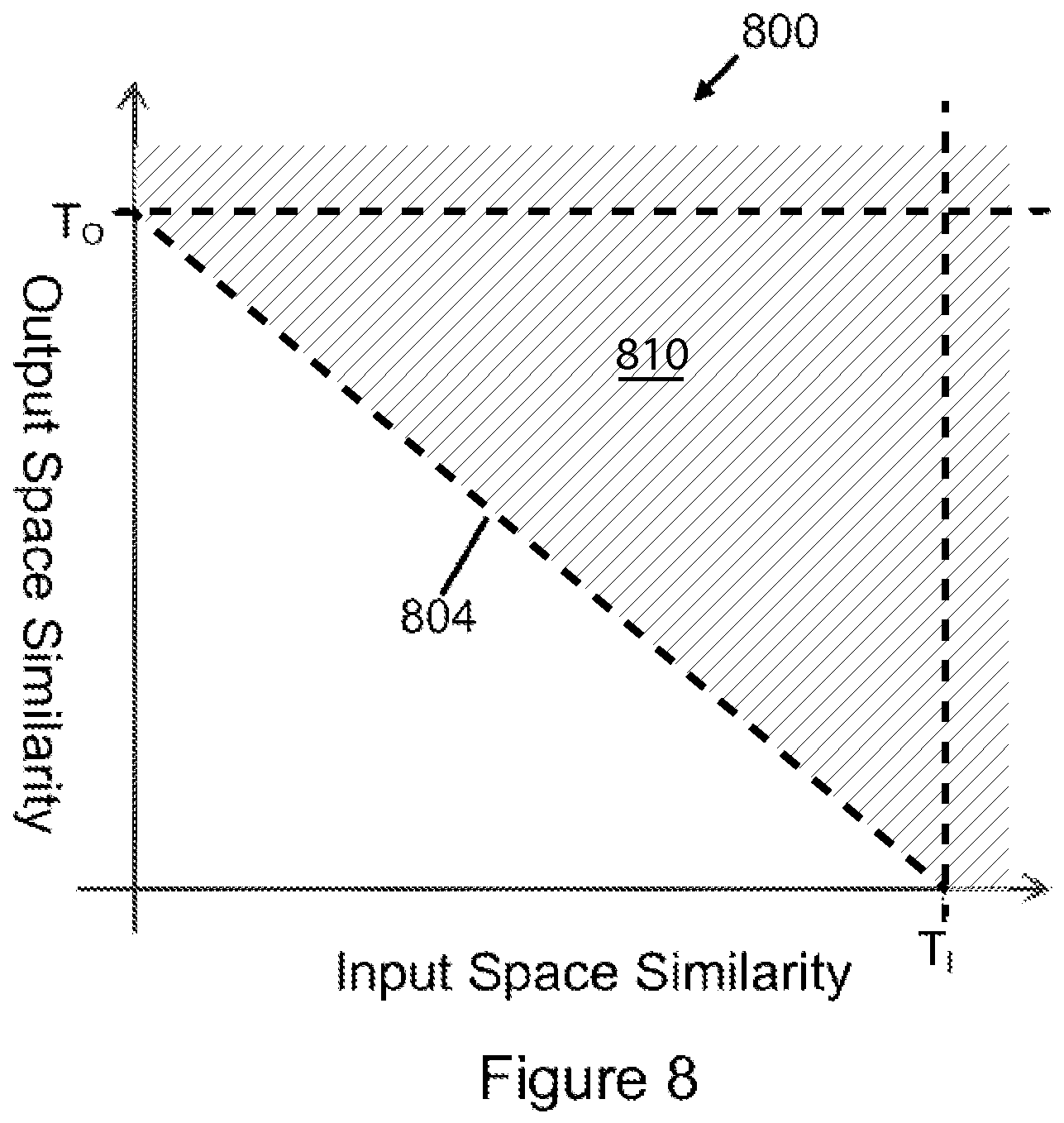 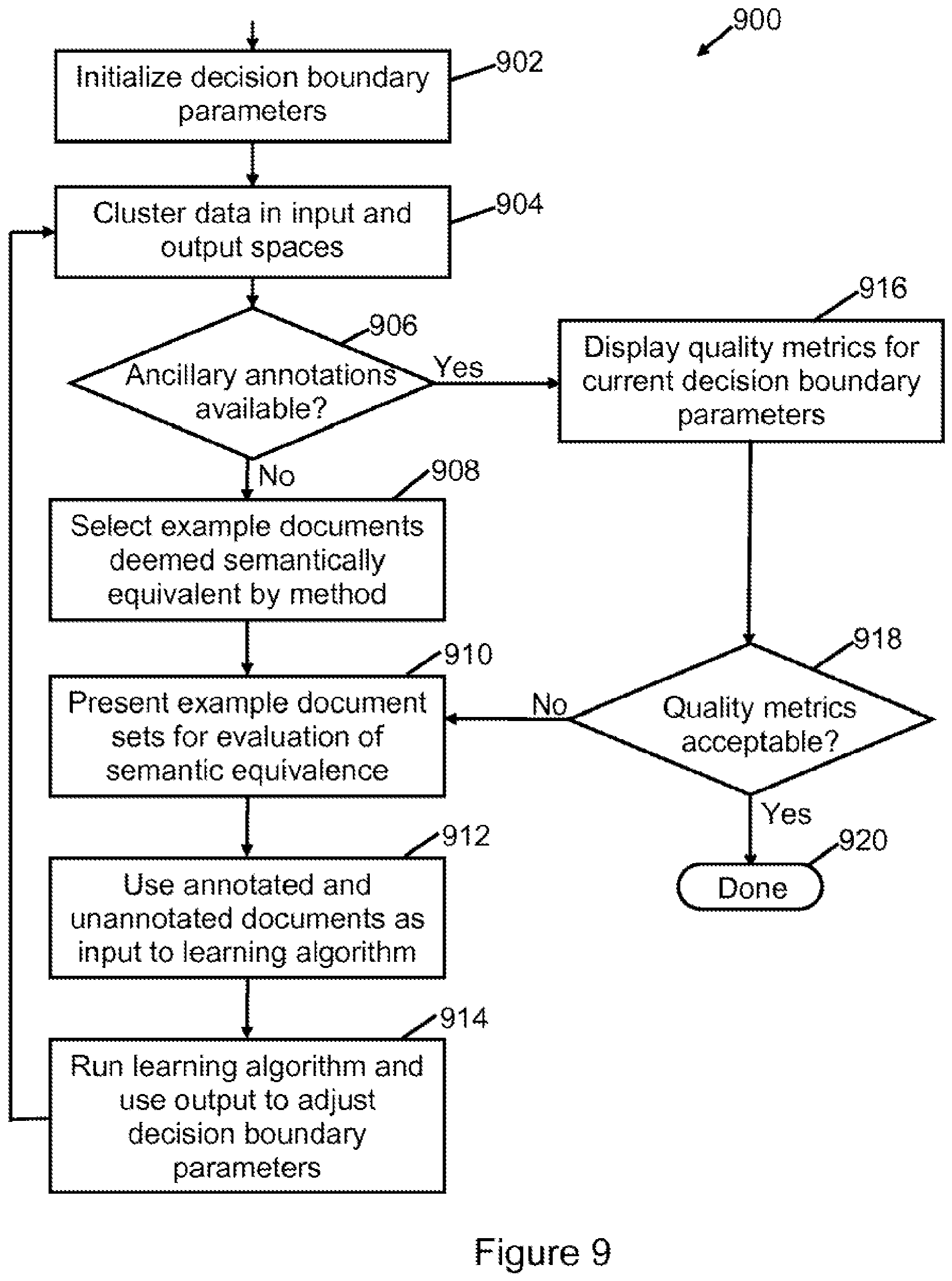 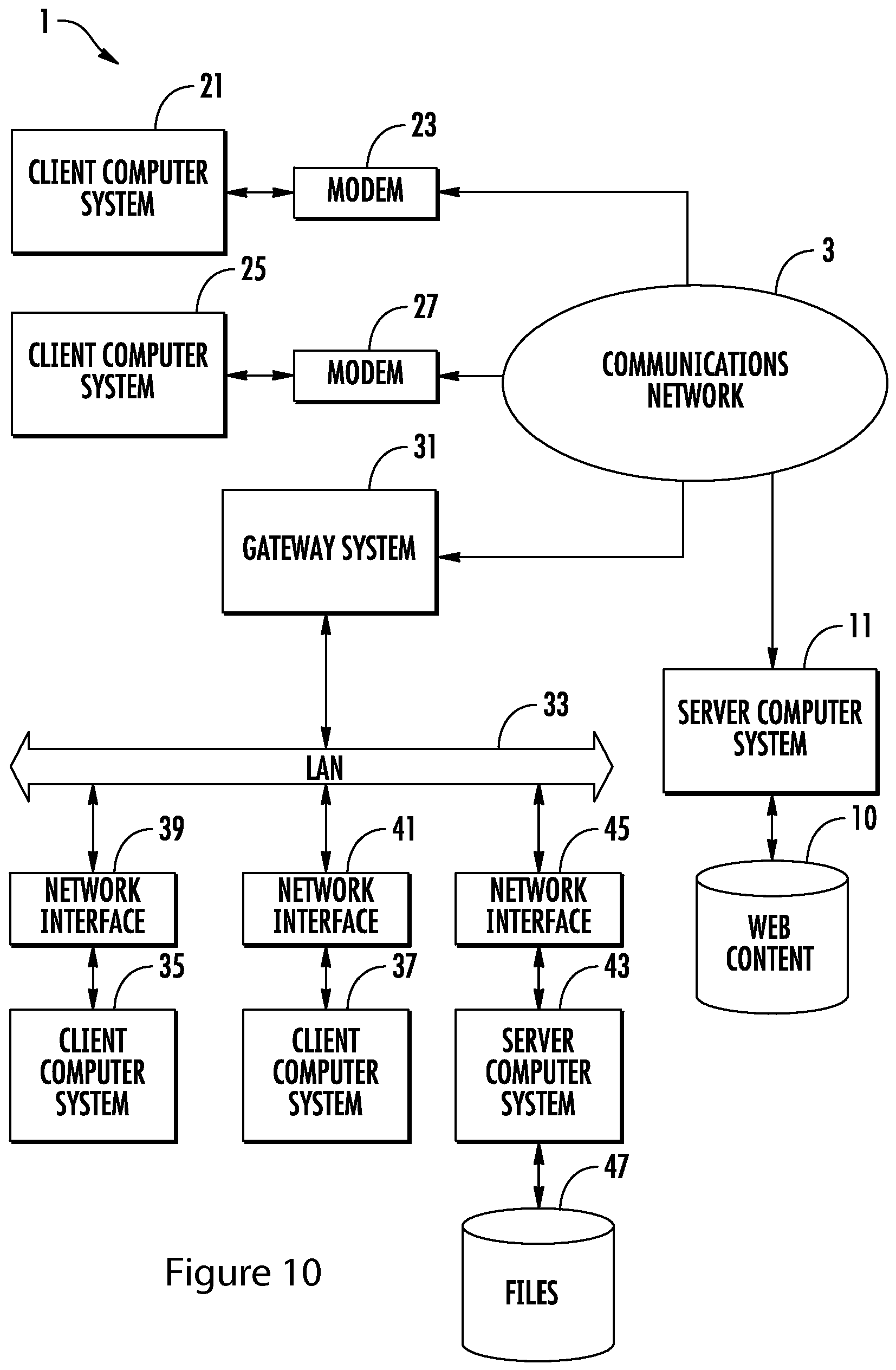 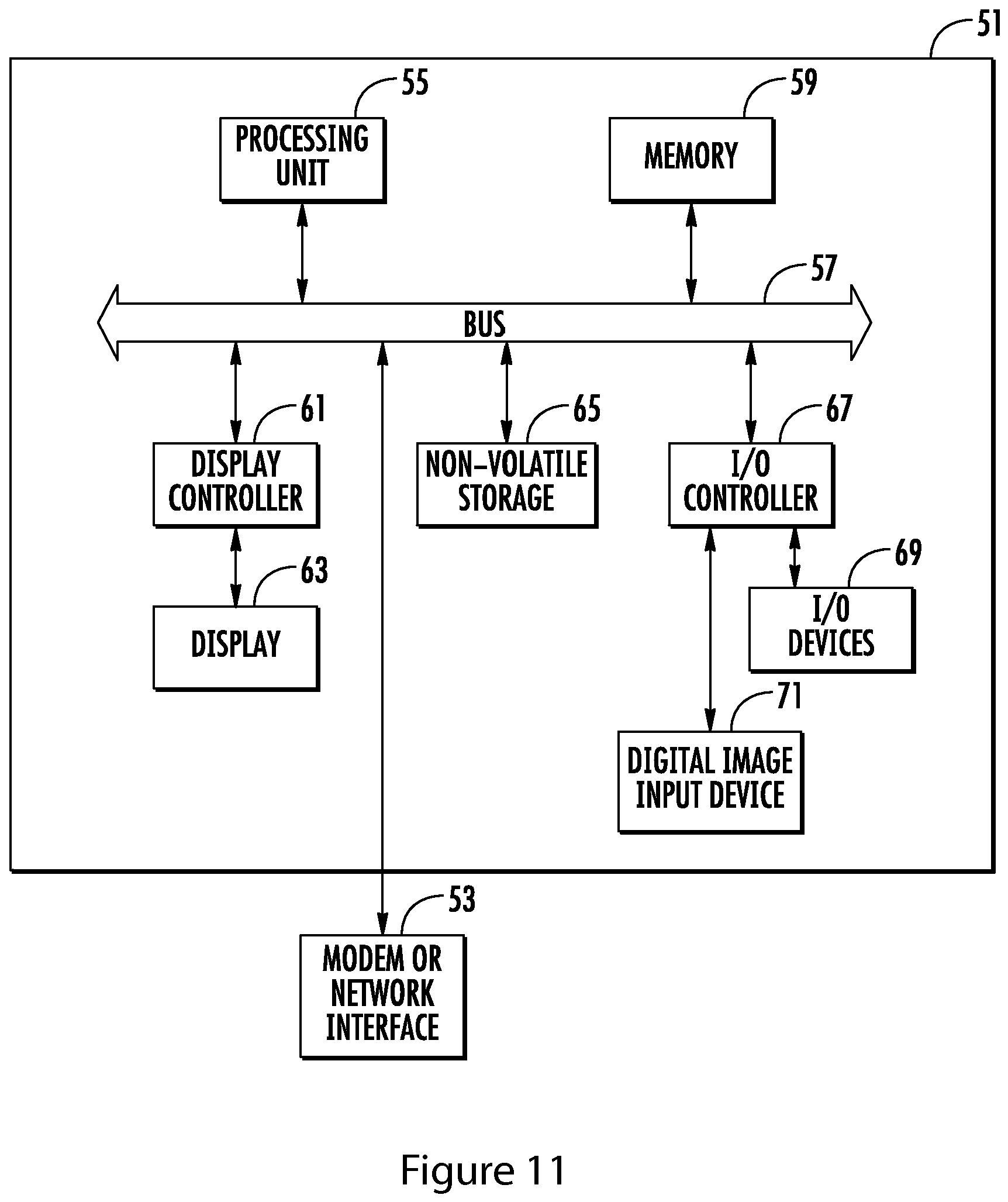