[0001] Technology to improve the safety of driving has evolved to now include assistive technology based upon sensors built into vehicles, e.g., automobiles. Features such as lane departure warning, collision detection and blind-spot monitoring are available, based upon camera, laser and radar technology or a combination thereof.
[0002] Today such assistive technologies are not affordable and/or not widely available. For one reason, at price points typically on the order of several thousands of dollars, these technologies are typically only purchased in high-end cars. Further, car manufacturers need to build embedded systems that remain reliable for as long as the lifetime of the car. Upgrading the software or hardware of such features is rarely easy and often not practically possible.
[0003] As an alternative to such stand-alone solutions in which each vehicle fends for itself, in late 1999, the United States Federal Communications Commission (FCC) allocated 75 MHz of spectrum in the 5.9 GHz band for the so-called Dedicated Short-Range Communications (DSRC) to be used by Intelligent Transportation Systems (ITS). The general idea was to implement safety improvements based upon inter-vehicle (v2v) or vehicle-to-infrastructure (v2i) communications, with vehicle and roadside monitors providing warnings to drivers. However, when researched, deploying dedicated roadside infrastructure has turned out to be very expensive, whereby actual implementation of this technology is unlikely to become widely available. Car manufacturers also have not adopted this technology to any noticeable extent, and any standardization across car manufacturers likely will be slow. US2011/0037617A1 describes a local server of a system for providing a vehicular safety service receiving road surface state information of each zone of a road in a service area from at least one road sensor located in the service area to calculate a road safety coefficient of each zone, and receives location information and running information of a vehicle from at least one vehicle terminal located in the service area to calculate a traffic flow analysis coefficient. The local server provides a vehicular safety service to a vehicle terminal by using the road safety coefficient of each zone and the traffic flow analysis coefficient.

[0004] According to several aspects of the present invention there is provided a method in a cloud service as set forth in claim 1, a corresponding system as set forth in claim 7 and a corresponding computer-readable media as set forth in claim 11.
[0005] This Summary is provided to introduce a selection of representative concepts in a simplified form that are further described below in the Detailed Description. This Summary is not intended to identify key features or essential features of the claimed subject matter, nor is it intended to be used in any way that would limit the scope of the claimed subject matter.
[0006] Briefly, various aspects of the subject matter described herein are directed towards a technology by which a service (e.g., a cloud service) receives a wireless communication that is sent from a mobile device associated with a vehicle, in which the wireless communication comprises information corresponding to a trajectory of the vehicle. The service determines from the trajectory-related information whether the vehicle is at risk of a collision, and if so, sends alert-related data to the vehicle. The risk of the collision may be whether the vehicle is within a threshold distance of another vehicle based upon the trajectory-related information and the other vehicle's trajectory, and/or whether the vehicle is in a lane departure state, e.g., based upon the trajectory-related information and road-related data.
[0007] In one aspect, a cloud service is configured with servers, including a plurality of grid servers. Each grid server is associated with a grid of plurality of grids, in which each grid corresponds to a geographic area. Each grid server computes whether vehicles that are known to the server to be in or approaching its associated grid are at risk of collision. If so, the grid server outputs alert-related data for communication to at least one of the vehicles that is at risk of collision.
[0008] In one aspect, trajectory-related data is received from a vehicle mobile device. The trajectory-related data is used to determine at least one grid corresponding to the vehicle mobile device. A query based upon the trajectory-related data of the vehicle is made as to whether the vehicle is at risk of a collision within the grid, and if so, alert-related data is output.
[0009] Other advantages may become apparent from the following detailed description when taken in conjunction with the drawings.

[0010] The present invention is illustrated by way of example and not limited in the accompanying figures in which like reference numerals indicate similar elements and in which:

FIGURE 1 is a representation of an architecture comprising a cloud service and mobile devices of vehicles, in which the cloud service is configured to assist drivers of the vehicles, according to one example embodiment.

FIG. 2 is a block diagram of example components and data used by a mobile device in obtaining trajectory related data and taking action upon alerts, according to one example embodiment.

FIG. 3A is a representation of how grids may be recursively sized based upon traffic density, according to one example embodiment.

FIG. 3B is a representation of how servers may be associated with grids, according to one example embodiment.

FIG. 4 is a flow diagram representing example steps that may be taken to determine whether a vehicle is at risk of a collision, so as to issue one or more alerts, according to one example embodiment.

FIG. 5 is a block diagram representing an example computing environment, in the form of a mobile device, into which aspects of the subject matter described herein may be incorporated.

FIG. 6 is a block diagram representing example non-limiting networked environments in which various embodiments described herein can be implemented.

FIG. 7 is a block diagram representing an example non-limiting computing system or operating environment in which one or more aspects of various embodiments described herein can be implemented.

where Lv is the location function from equation (1), ε is some small distance value and the minus operation computes the Euclidean distance between the two locations. With this equation, the service 108 checks whether two vehicles in the grid come very close to each other at some time.
[0037] The corresponding check for whether the vehicle is in a state of lane (including lane or roadside) departure is:

[0094] While the invention is susceptible to various modifications and alternative constructions, certain illustrated embodiments thereof are shown in the drawings and have been described above in detail. It should be understood, however, that there is no intention to limit the invention to the specific forms disclosed, but on the contrary, the intention is to cover all modifications, alternative constructions, and equivalents falling within the scope of the invention.
[0095] In addition to the various embodiments described herein, it is to be understood that other similar embodiments can be used or modifications and additions can be made to the described embodiment(s) for performing the same or equivalent function of the corresponding embodiment(s) without deviating therefrom. Still further, multiple processing chips or multiple devices can share the performance of one or more functions described herein, and similarly, storage can be effected across a plurality of devices. Accordingly, the invention is not to be limited to any single embodiment, but rather is to be construed in breadth and scope in accordance with the appended claims.

dividing, by the cloud service (108), a geographic region into a plurality of grids, each grid corresponding to a coverage area, wherein each grid is associated with a grid server (112, 114);

receiving, at the cloud service (108), a wireless communication from a mobile device associated with a vehicle (104) and comprising trajectory related data of the vehicle (104);

determining from the trajectory data, by the grid servers (112, 114), at least one grid in which the vehicle is in or is projected to be in before updated information from the mobile device is received;

determining, by the grid server associated with the at least one grid, based on the trajectory data whether the vehicle is at risk of collision, and if so, to send an alert-related data for communication to the vehicle; and

maintaining, by the cloud service, the load over all grids to have substantially the same load by subdividing grids that have too much load and collapsing grids with too little load.

5. The method of any of claims 1 to 4, further comprising indexing each grid with a standard military grid reference system, MGRS, with a numeric suffix containing two equal sized parts known as the easting and the northing that uniquely identifies a coverage area, which may be divided into smaller regions with a pair of numerals identifying the east, north location of a particular smaller region, the method further comprising determining which server (110-116) is responsible for a coverage area using the longest prefix match on the MGRS index of that coverage area.

6. The method of any of claims 1 to 5, the method further comprising:

divide a geographical regions into a plurality of grids, each grid corresponding to a coverage area and each grid associate with a grid server (112, 114),

receive a wireless communication from a mobile device associated with a vehicle (104) and comprising trajectory related data of the vehicle (104);

determine from the trajectory data at least one grid in which the vehicle is in or is projected to be in before updated information from the mobile device is received;

determine via the grid server associated with the at least one grid, based on the trajectory data whether the vehicle is at risk of collision, and if so, to send an alert-related data for communication to the vehicle; and

maintaining, the load over all grids to have substantially the same load by subdividing grids that have too much load and collapsing grids with too little load.

9. The system of claim 7 or 8, wherein at least one grid server comprises a spatial store and a query engine (114) that share information in a common memory.

10. The system of claims 7 or 8, wherein the cloud service (108) is configured to receive sensed data (222) from a mobile device (102) of a vehicle (104), and wherein the cloud service (108) comprise at least one server (112-116) that is configured to compensate for inaccuracies in the sensed data, including by combining the sensed data with at least one of: information from one or more other sensors, information from one or more other vehicles and historical information associated with the vehicle (104) or a mobile device (102). 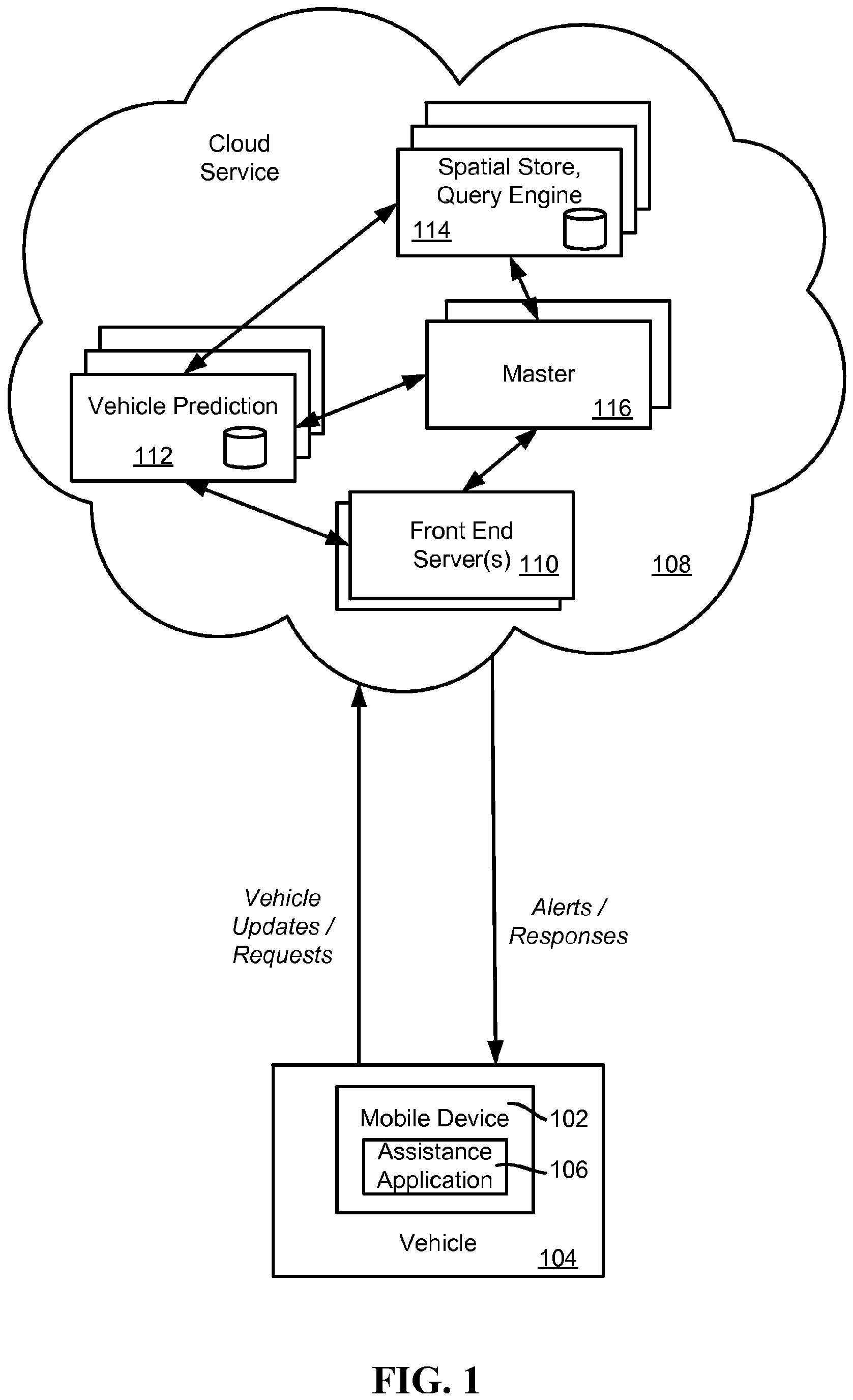 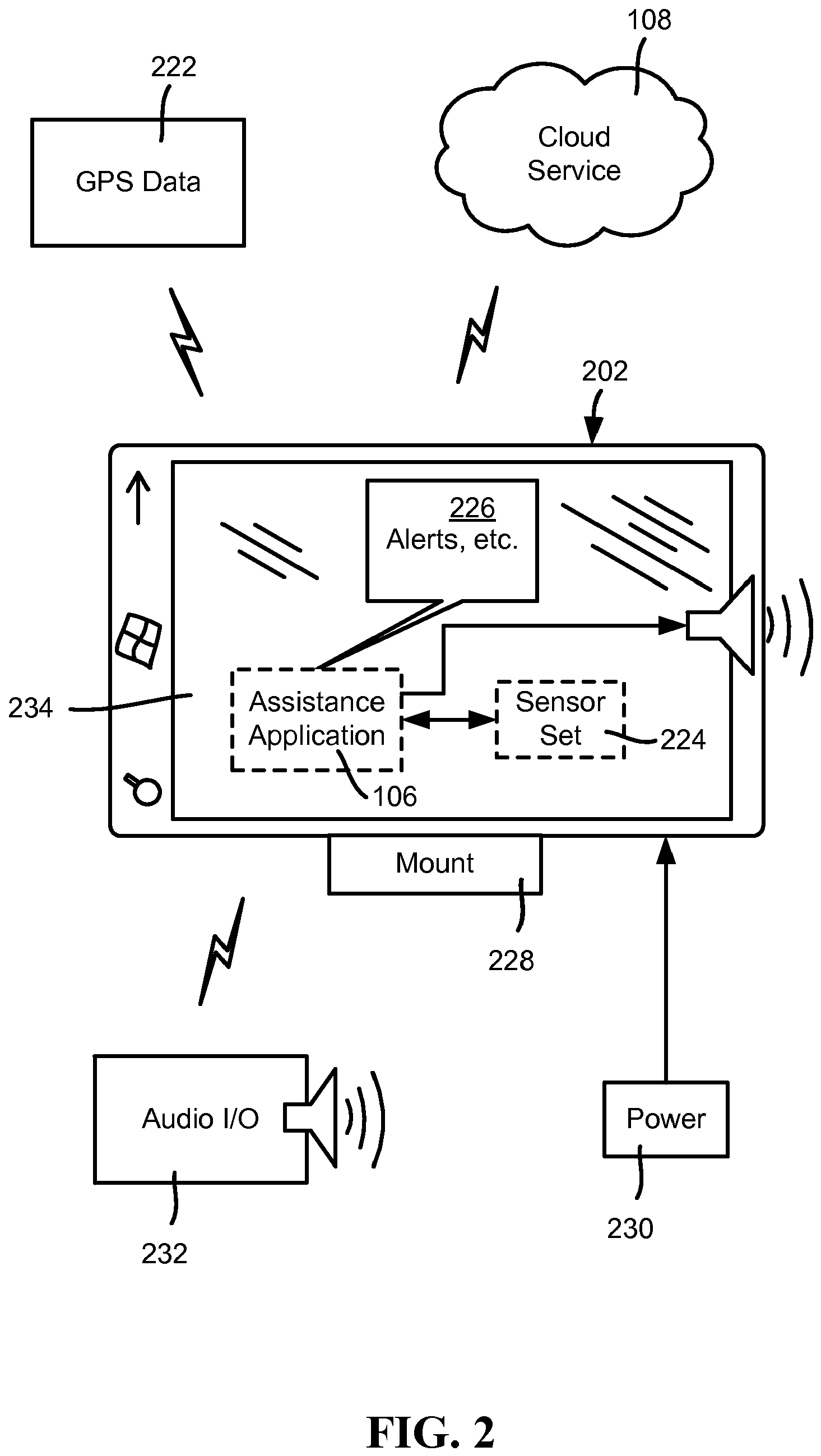 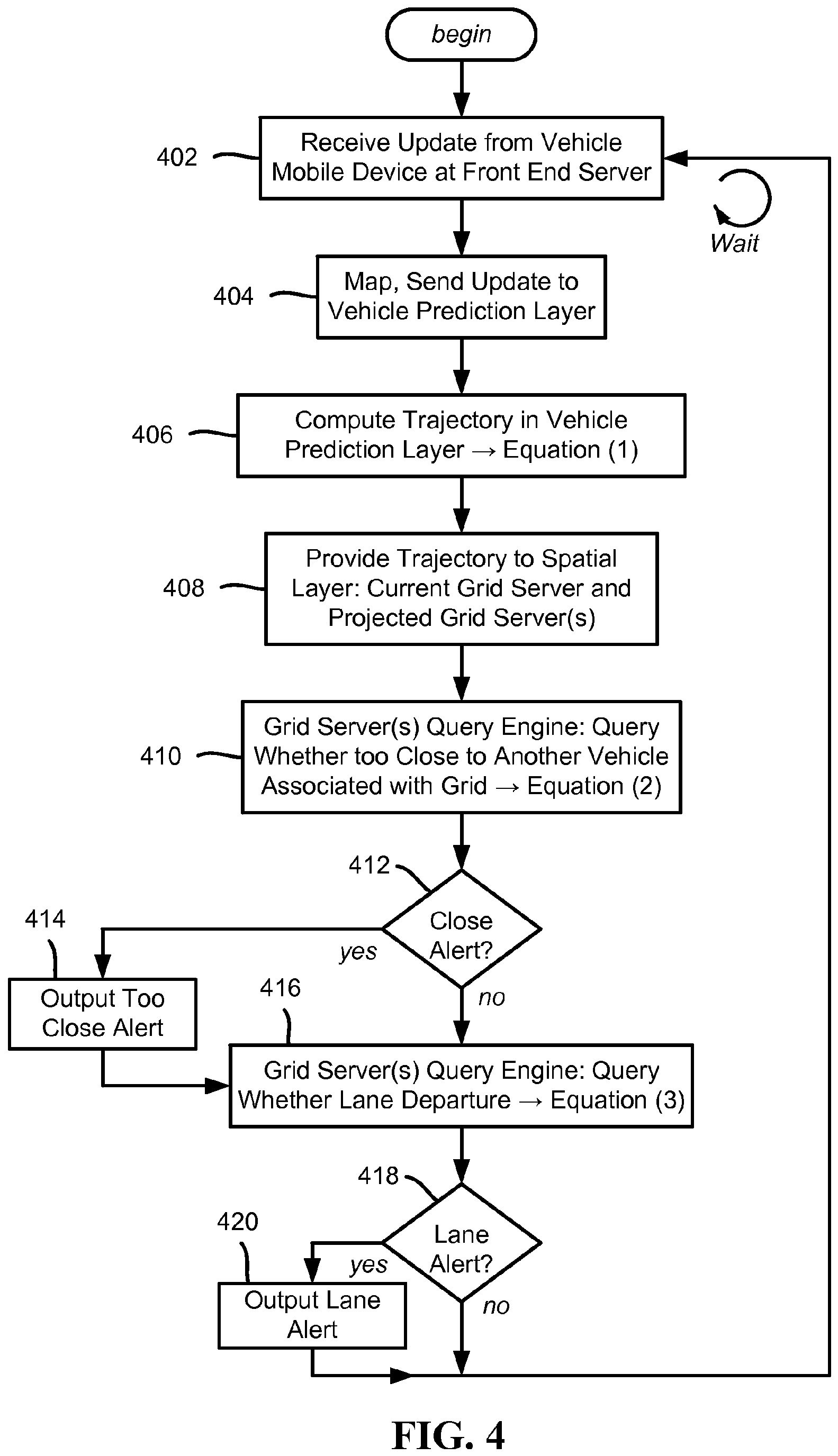 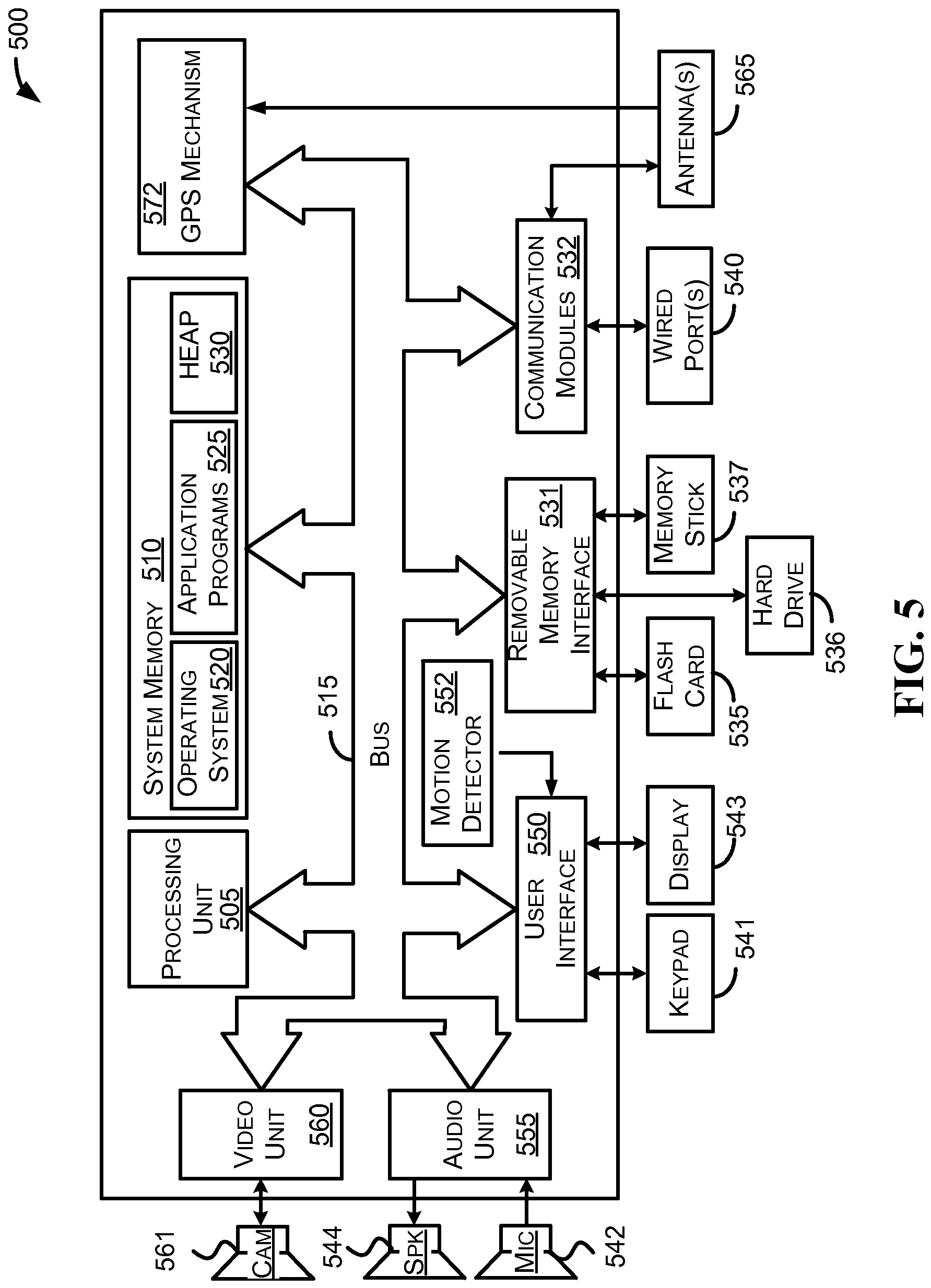 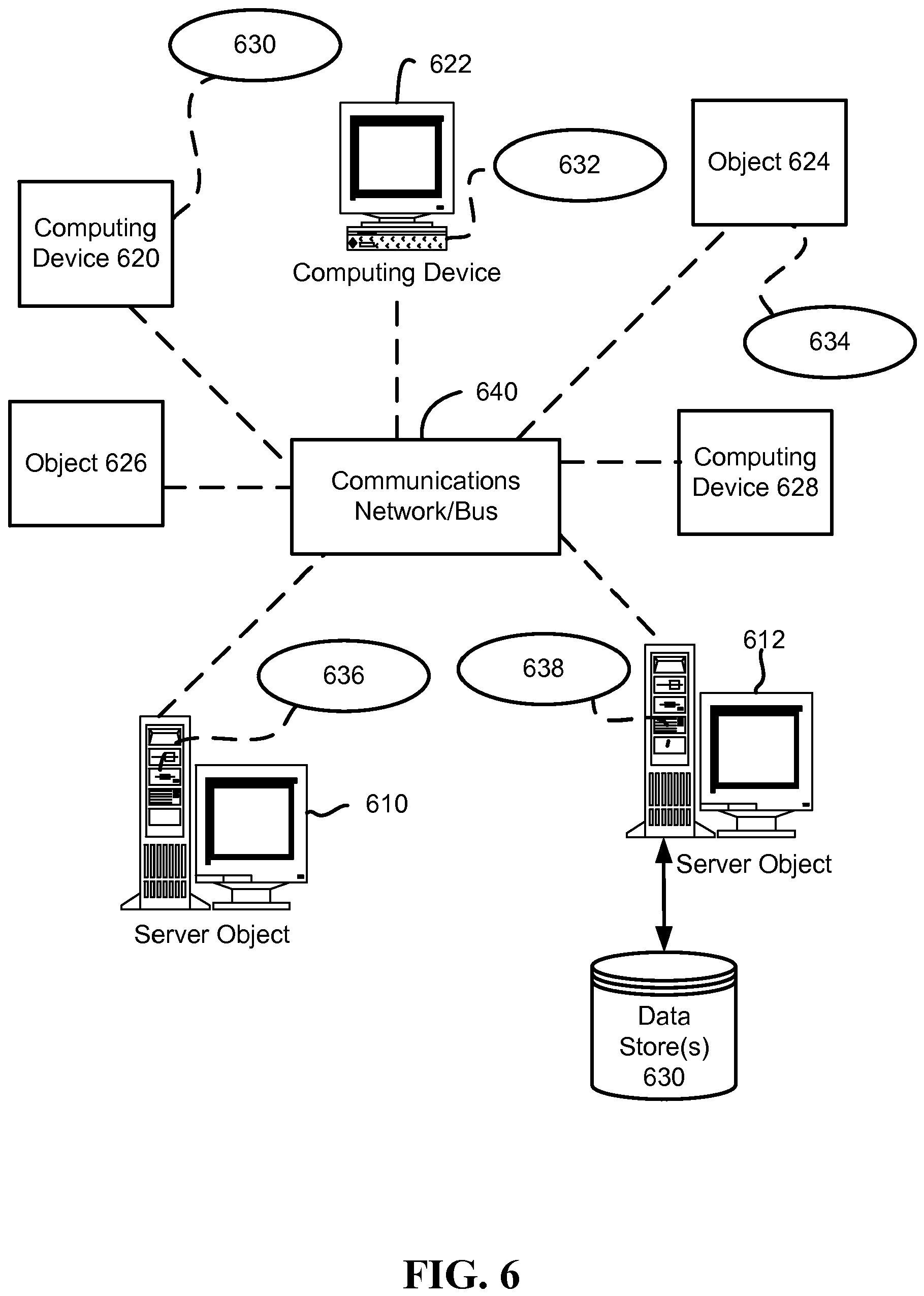 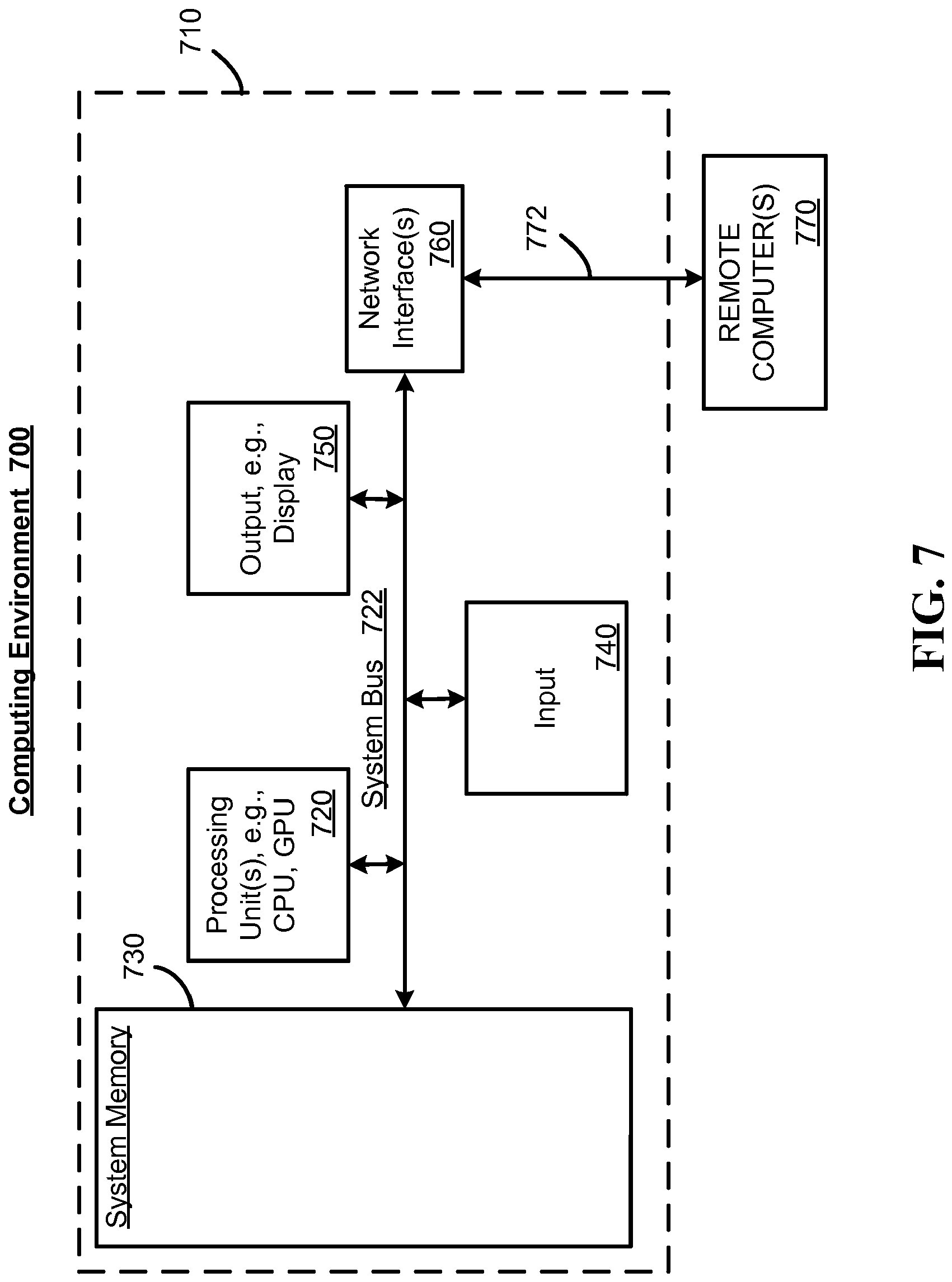