[0001] The present disclosure relates generally to computer networks, and, more particularly, to selective forwarding modes in a routing topology of a shared-media communication network.

[0002] Low power and Lossy Networks (LLNs), e.g., sensor networks, have a myriad of applications, such as Smart Grid and Smart Cities. Various challenges are presented with LLNs, such as lossy links, low bandwidth, battery operation, low memory and/or processing capability, etc.
[0003] For example, often multiple transmission attempts are required to successfully send a packet across a communication network, resulting in higher energy consumption. In energy constrained environments, the multiple transmissions prove to be expensive and may result in disconnected network regions (e.g., graphs) until energy is replenished. Energy and other scarce resources, such as memory, are also consumed for maintenance of various states (e.g., routing states) and for processing tasks such as routing table look ups, validating authenticity, etc.
[0004] A paper by Kevin Swartz, et al, entitled "Design and Simulation of a high performance Emergency data delivery Protocol" published at the ICNS Third International Conference on Networking and Services, 2007, page 113, discloses a protocol designed to apply in an emergency to shut down a node and to cause any node that receives an emergency packet to also shut down. A paper by S.U.Hashmi, et al, entitled "Reliability model for extending cluster lifetime using Backup Cluster Heads in cluster-based Wireless Sensor Networks" published at the IEEE 6th International Conference on Wireless and Mobile Computing, Networking and Communications, 2010, pages 479-485, discloses a cluster-based two-tier Wireless Sensor Networks (WSNs), in which the cluster-head nodes (CHs) gather data from sensors and then transmit to the base station. When these cluster head nodes start to die, the coverage of the respective clusters is lost and it leaves the region unmonitored. A Backup Cluster Head (BCH) is selected for those CHs which are close to depleting their energy, and, when the CH dies, the BCH takes over the responsibility and continues to work as a new cluster head. US 2010/271994 discloses a technology for reserving energy at network nodes within a wireless network and establishing energy threshold levels within the network nodes to suspend or maintain certain operational states as supported by time varying energy levels. A paper by Fan Wei, et al, entitled "Autonomous Community Cooperation Technology for Real-Time Transmission of Emergency Information" published at the IEEE 13th International Conference on High Performance Computing and Communications (HPCC), 2011, pages 661-667, proposes a Community, which is a group of wireless routers for transmitting emergency information. Emergency information transmission will be protected via the community from interferences of information transmission from outside the community. US 2013/016759 discloses a communication device that determines whether a neighboring communication device is operating in power saving mode. If it is, it transmits a transmission to the neighboring communication device starting at any sub-timeslot of the plurality of sub-timeslots.

[0005] The embodiments herein may be better understood by referring to the following description in conjunction with the accompanying drawings in which like reference numerals indicate identically or functionally similar elements, of which:

FIG. 3 illustrates an example routing topology (e.g., a directed acyclic graph of "DAG") in the communication network of FIG. 1;

FIG. 4 illustrates an example view of a node in the communication network having entered a selective forwarding mode and notifying neighboring nodes;

FIG. 5B illustrates an example view of the alternate node being used for all traffic;

FIG. 8 illustrates an example simplified procedure for forwarding only critical messages to a neighboring node; and

FIG. 9 illustrates an example simplified procedure for determining whether an alternate path complies with a service level agreement.

determining (710) a level of resources of the node; and

determining the trigger condition (715) in response to the resource level being below a first threshold;

notifying (730), by the node, one or more neighboring nodes in the shared-media communication network that the node has entered selective forwarding mode,

the method characterised by:
receiving, by the node from a management node of the network, an instruction to operate as a leaf node in the network, and, in response, ceasing to forward traffic.

2. The method of claim 1, further comprising:
monitoring the resources of the node to determine the resource level, wherein the resources are selected from a group consisting of: available memory, a processing capacity, and a battery level.

one or more network interfaces (210) to communicate within a tree-based shared-media communication network;

a processor (220) coupled to the network interfaces (210) and adapted to execute one or more processes; and

a memory (240) configured to store a process executable by the processor (220), the process when executed operable to perform all the steps of a method according to any one of the preceding claims. 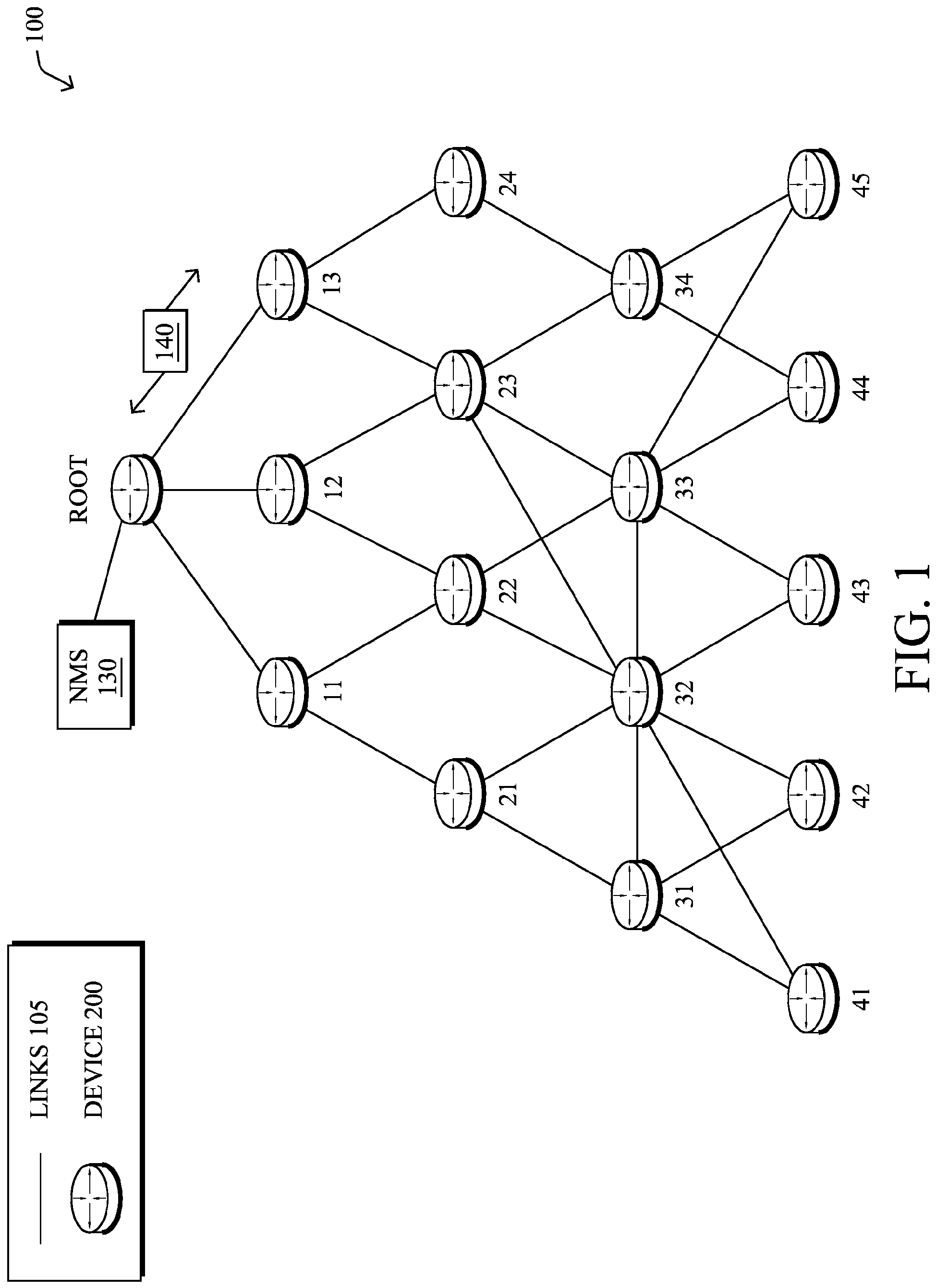 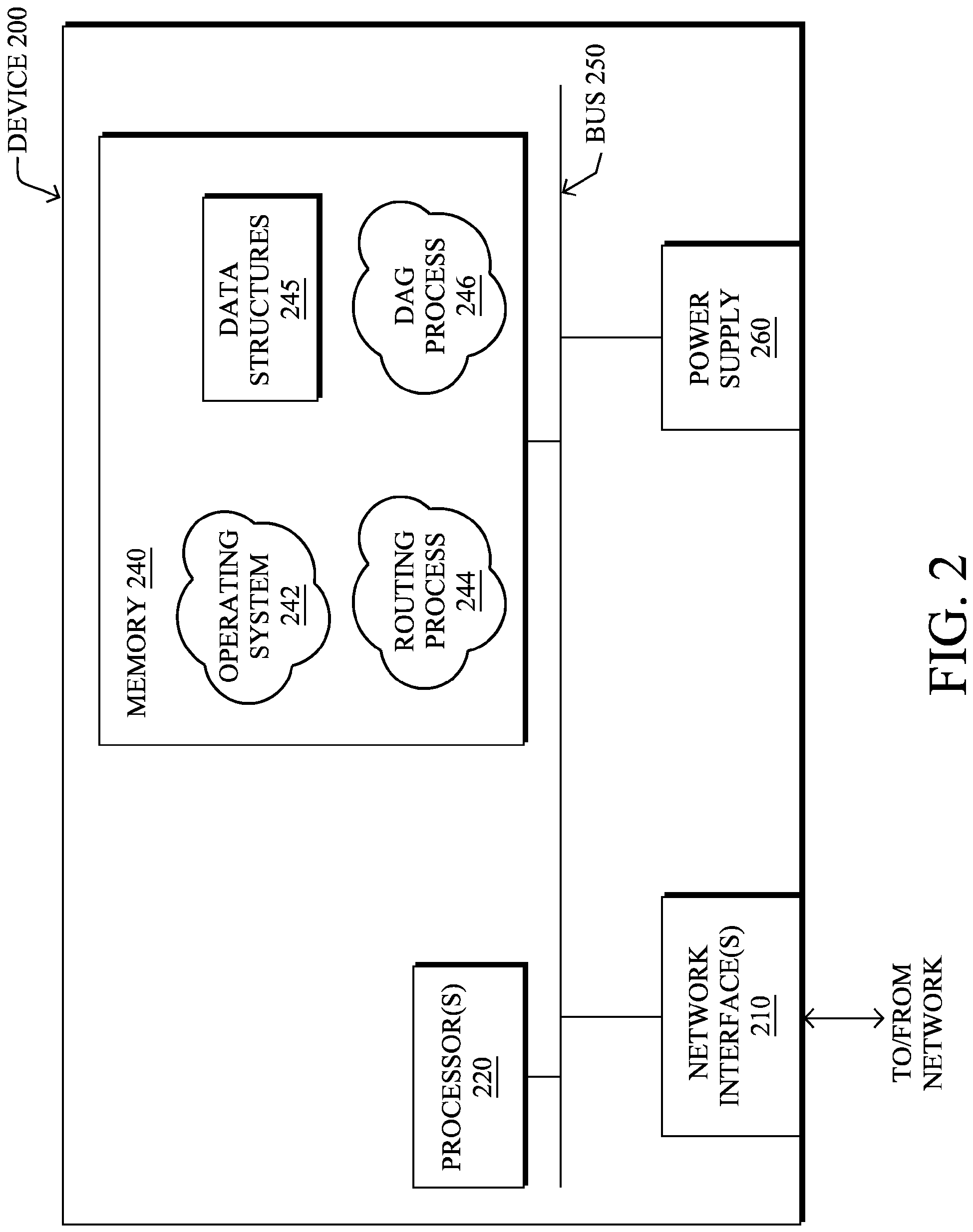 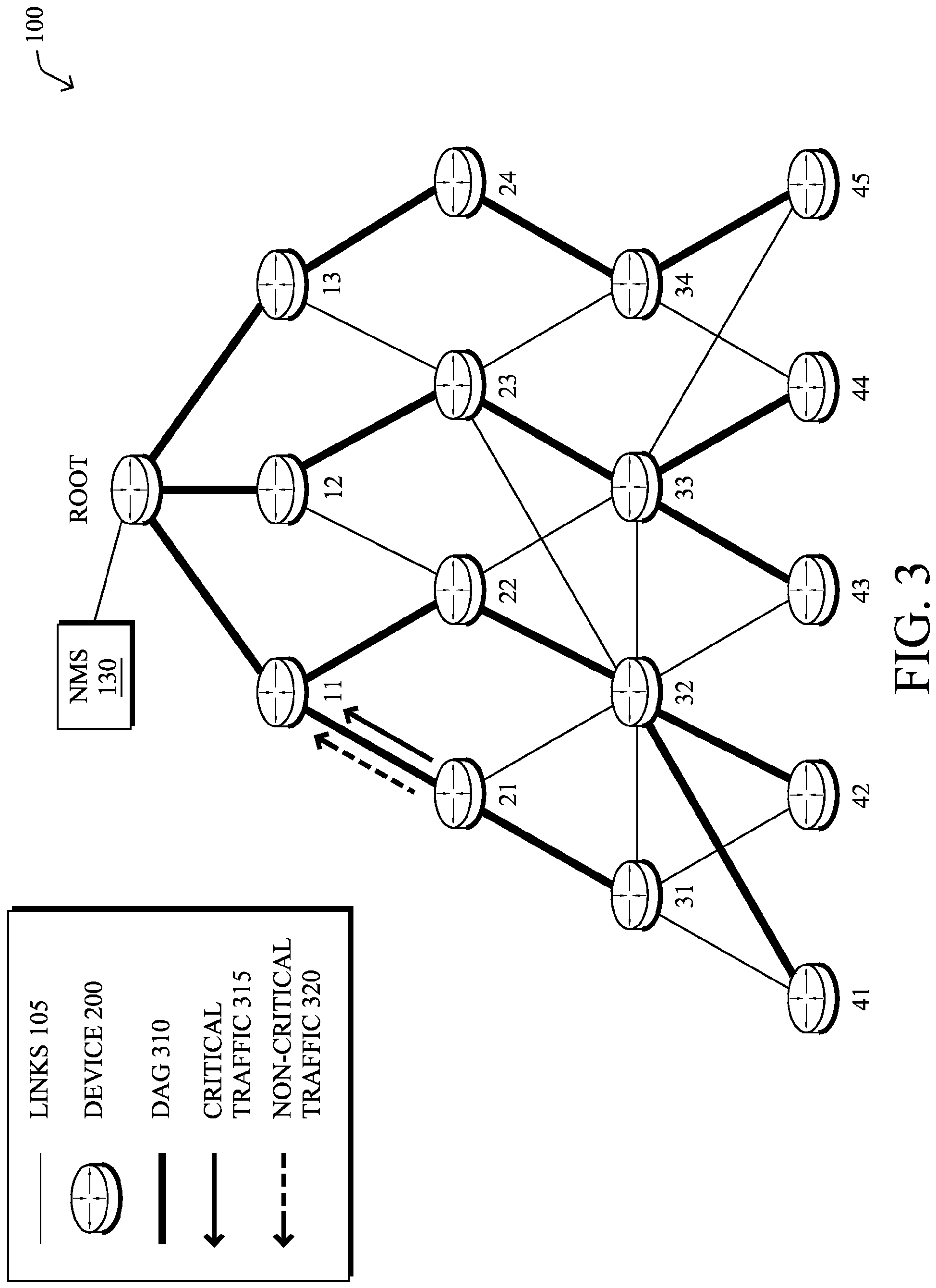 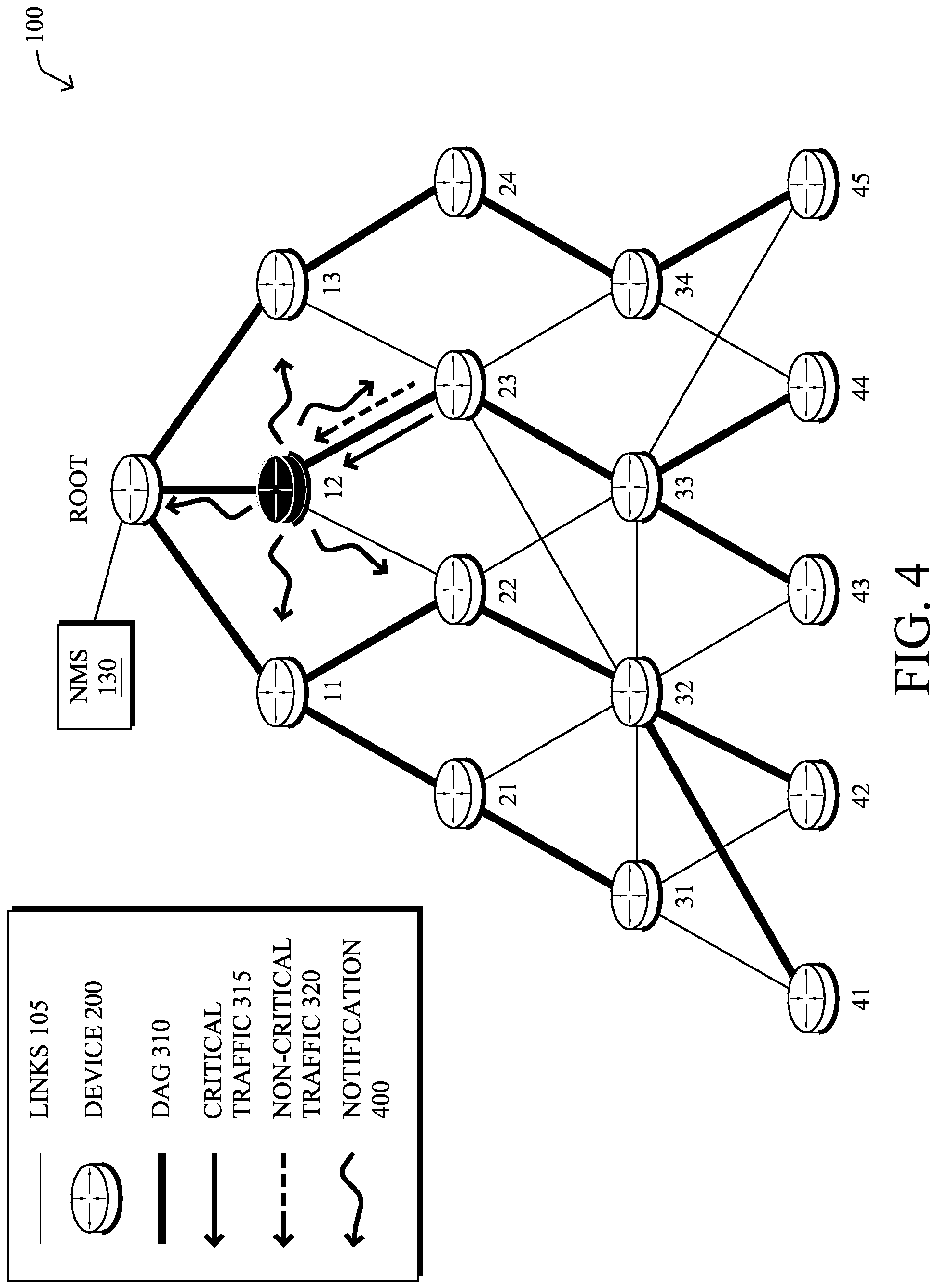 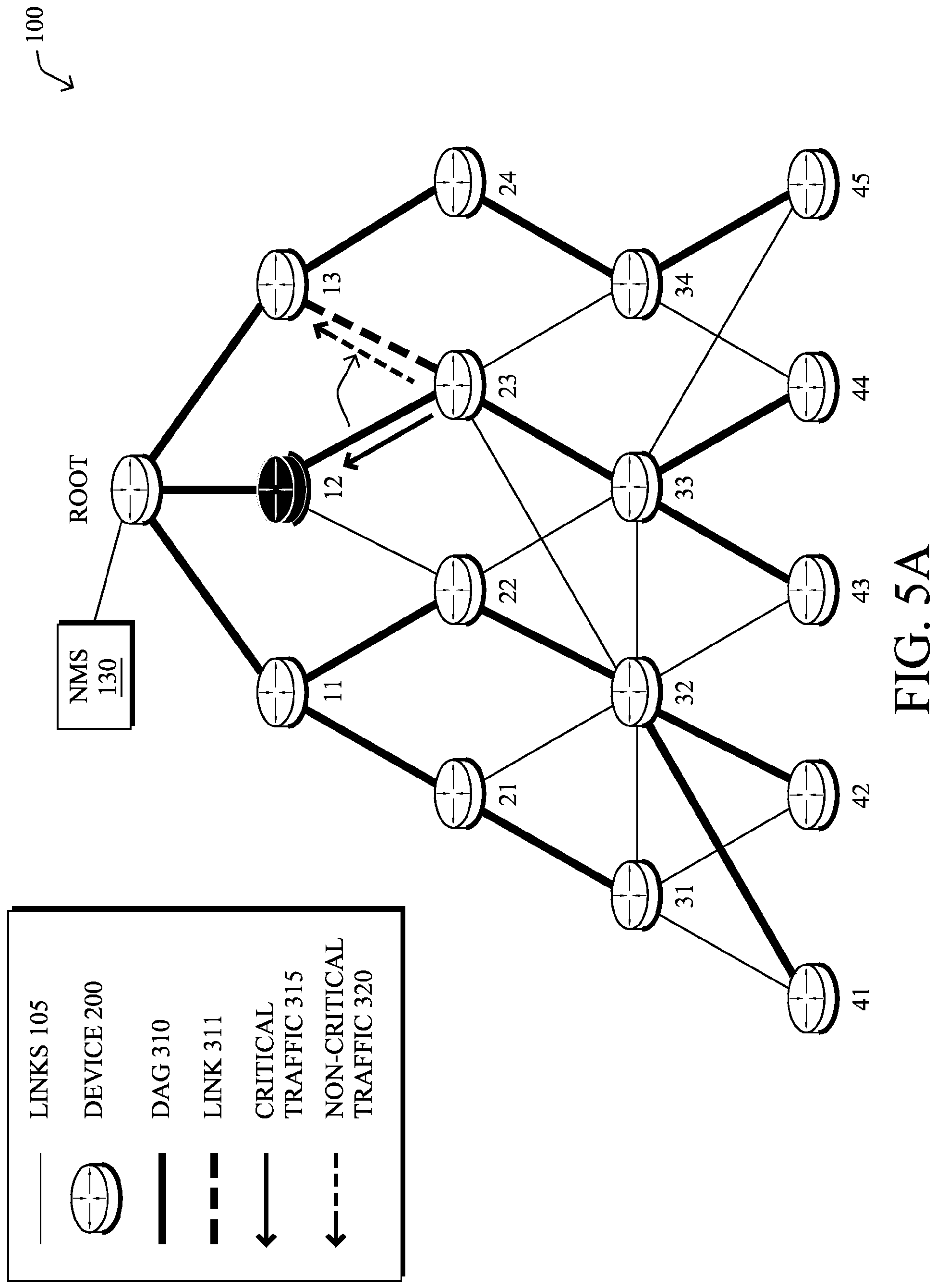 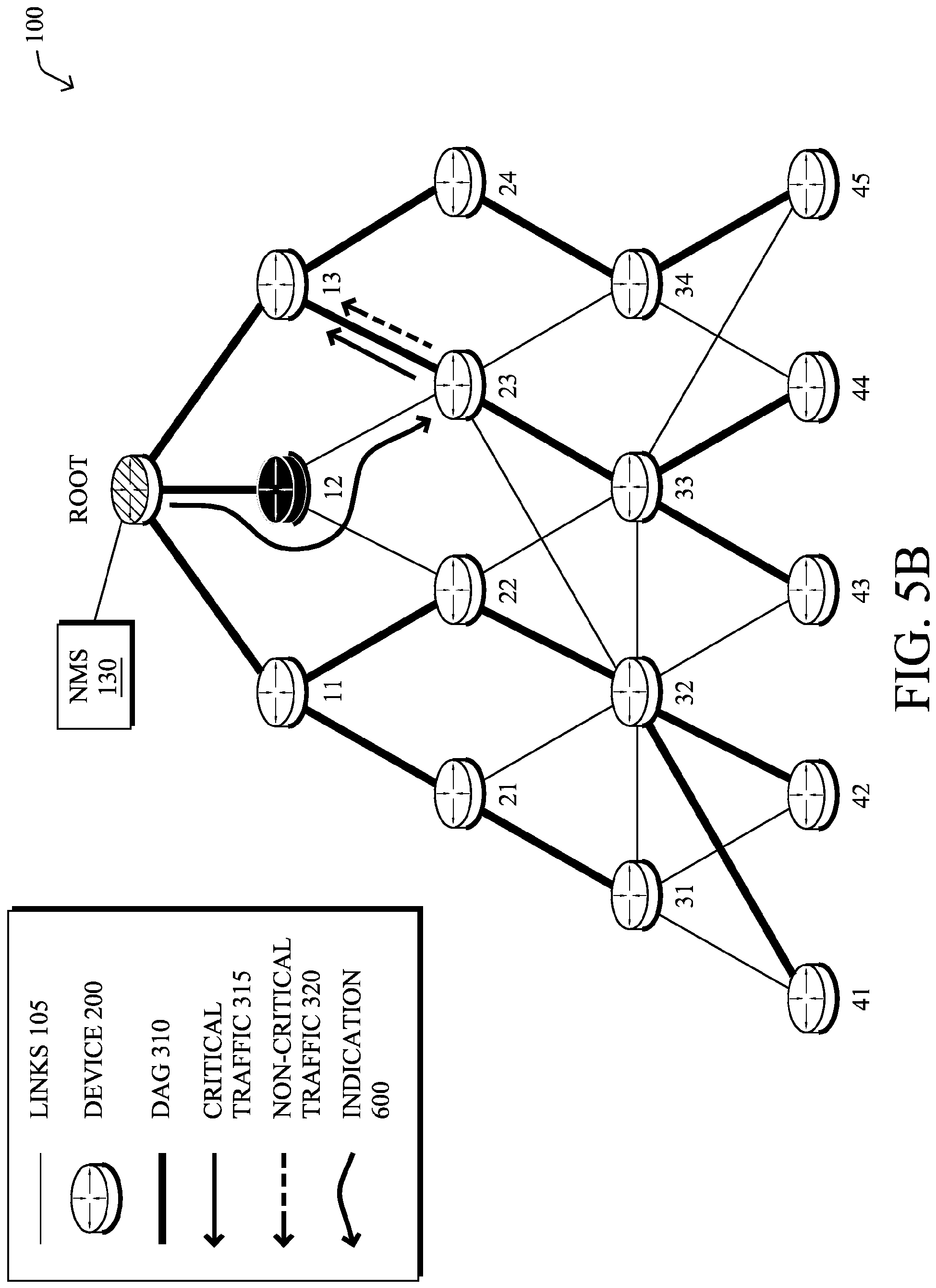 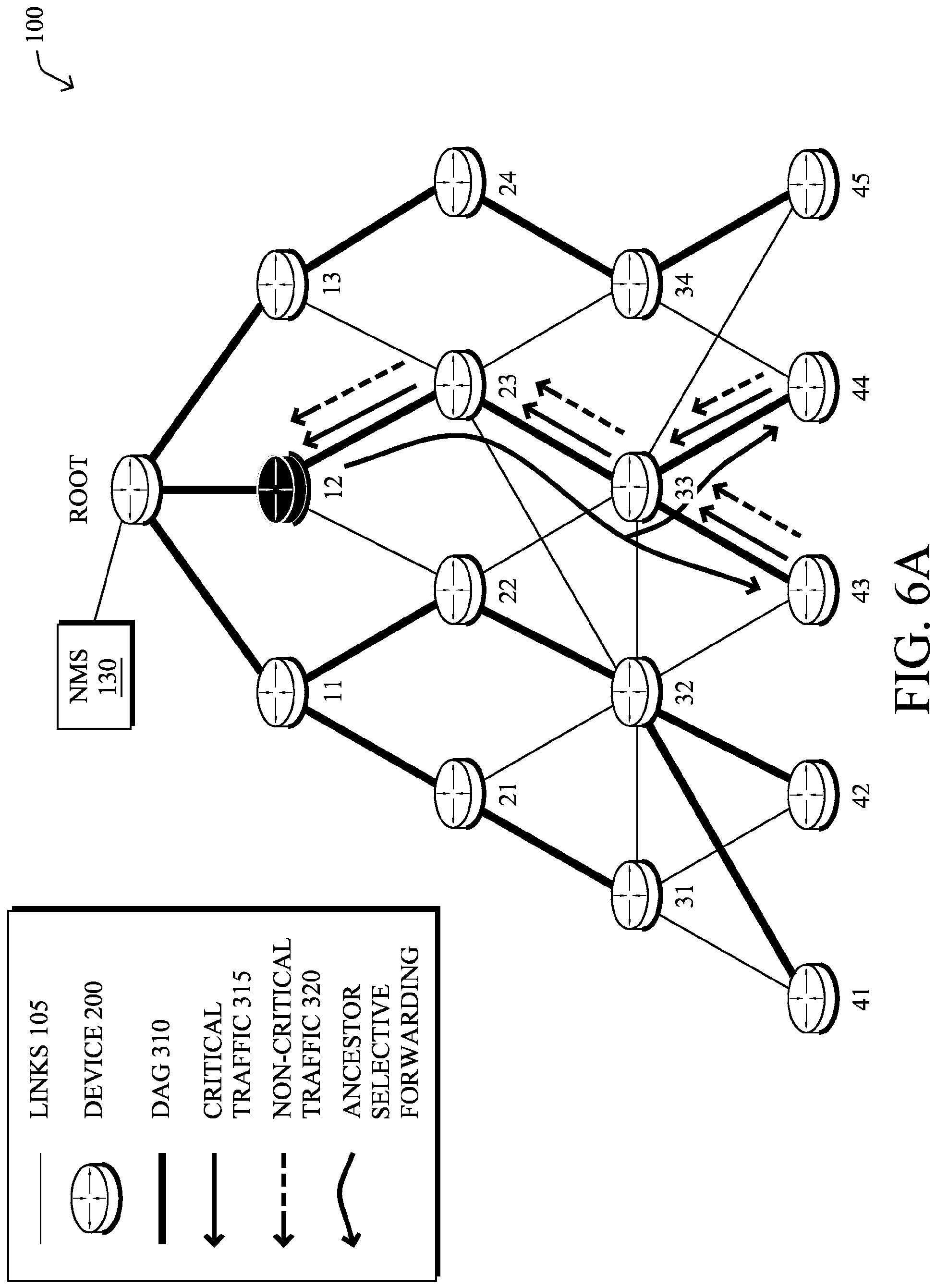 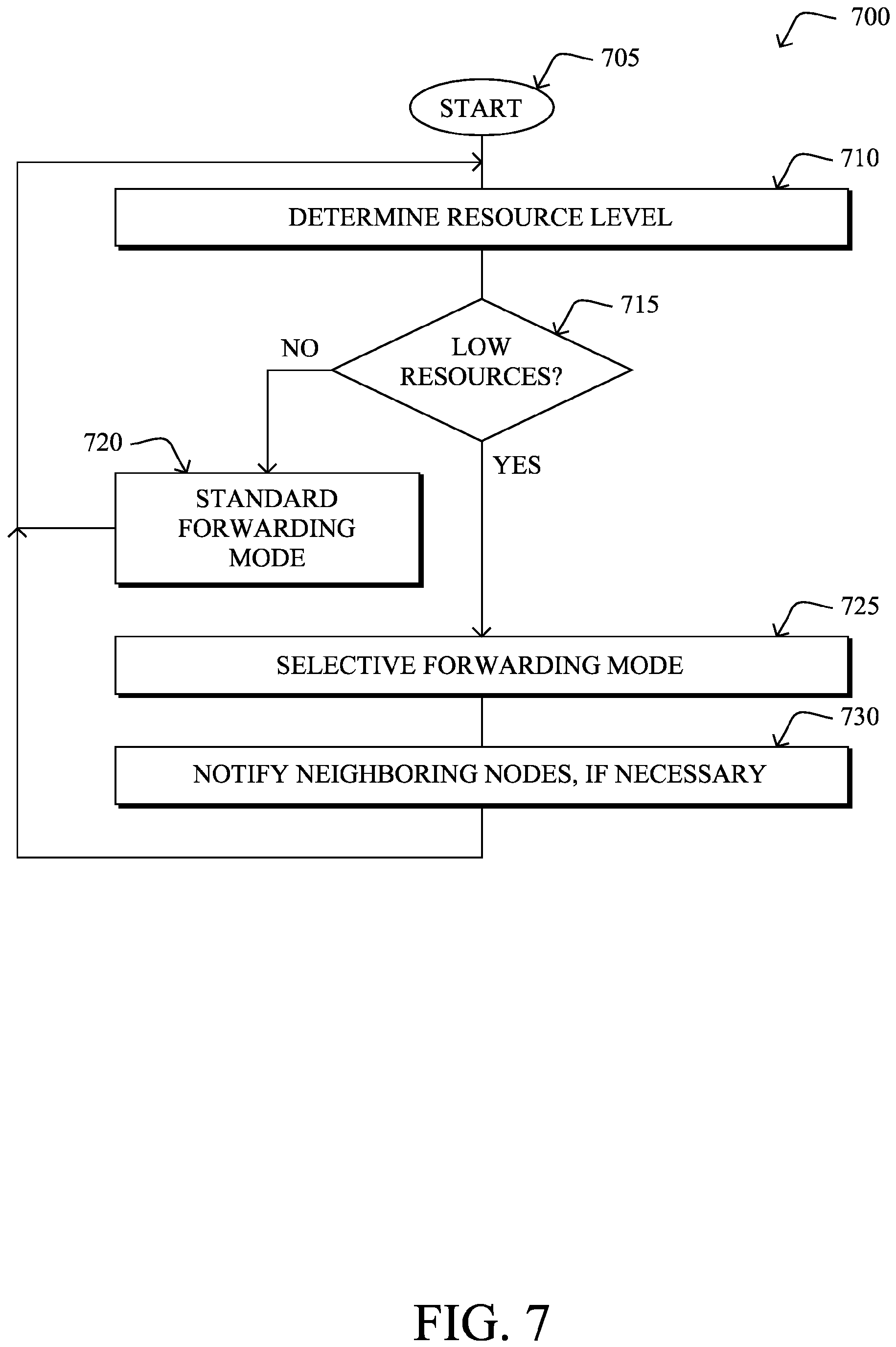 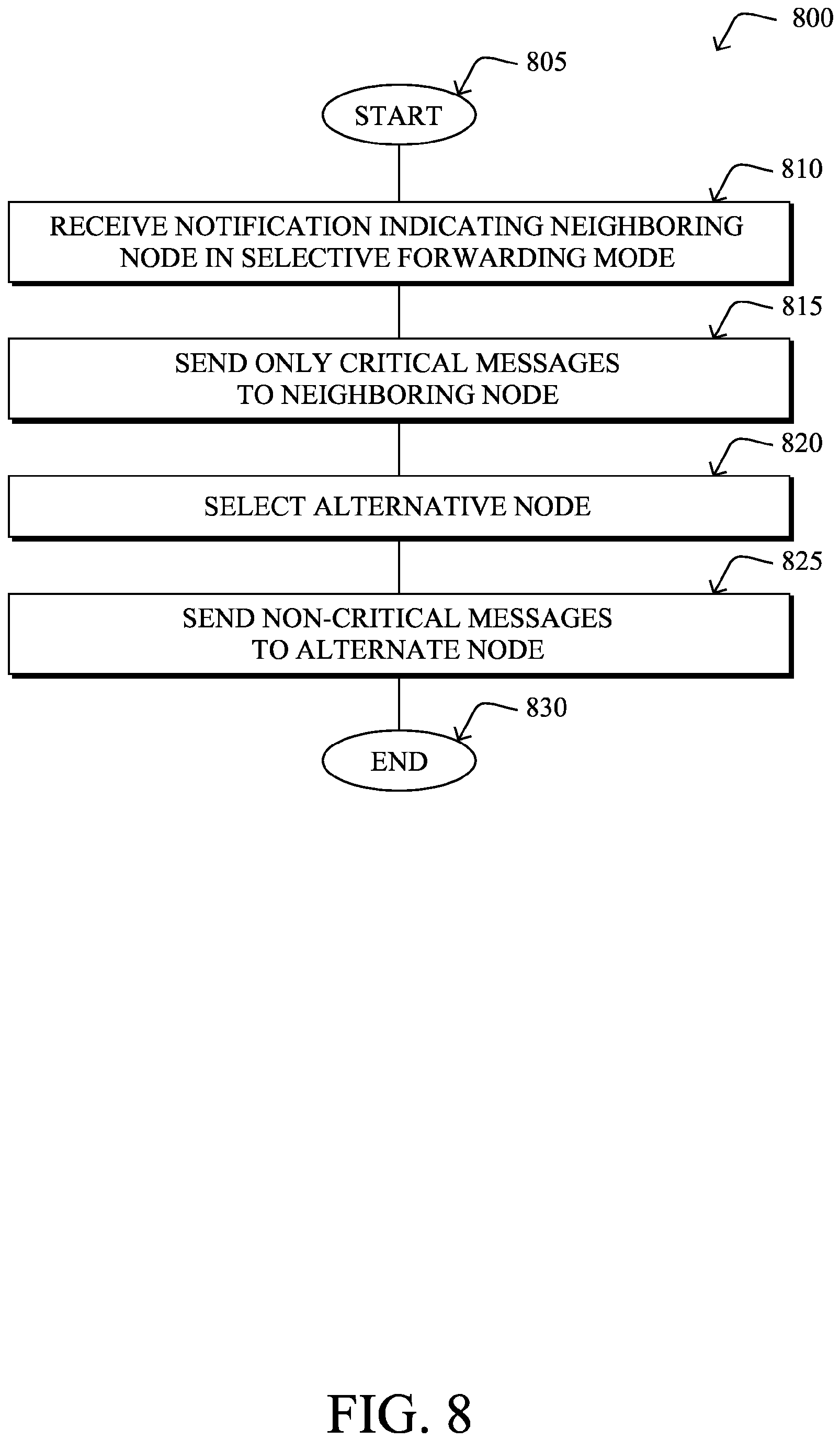 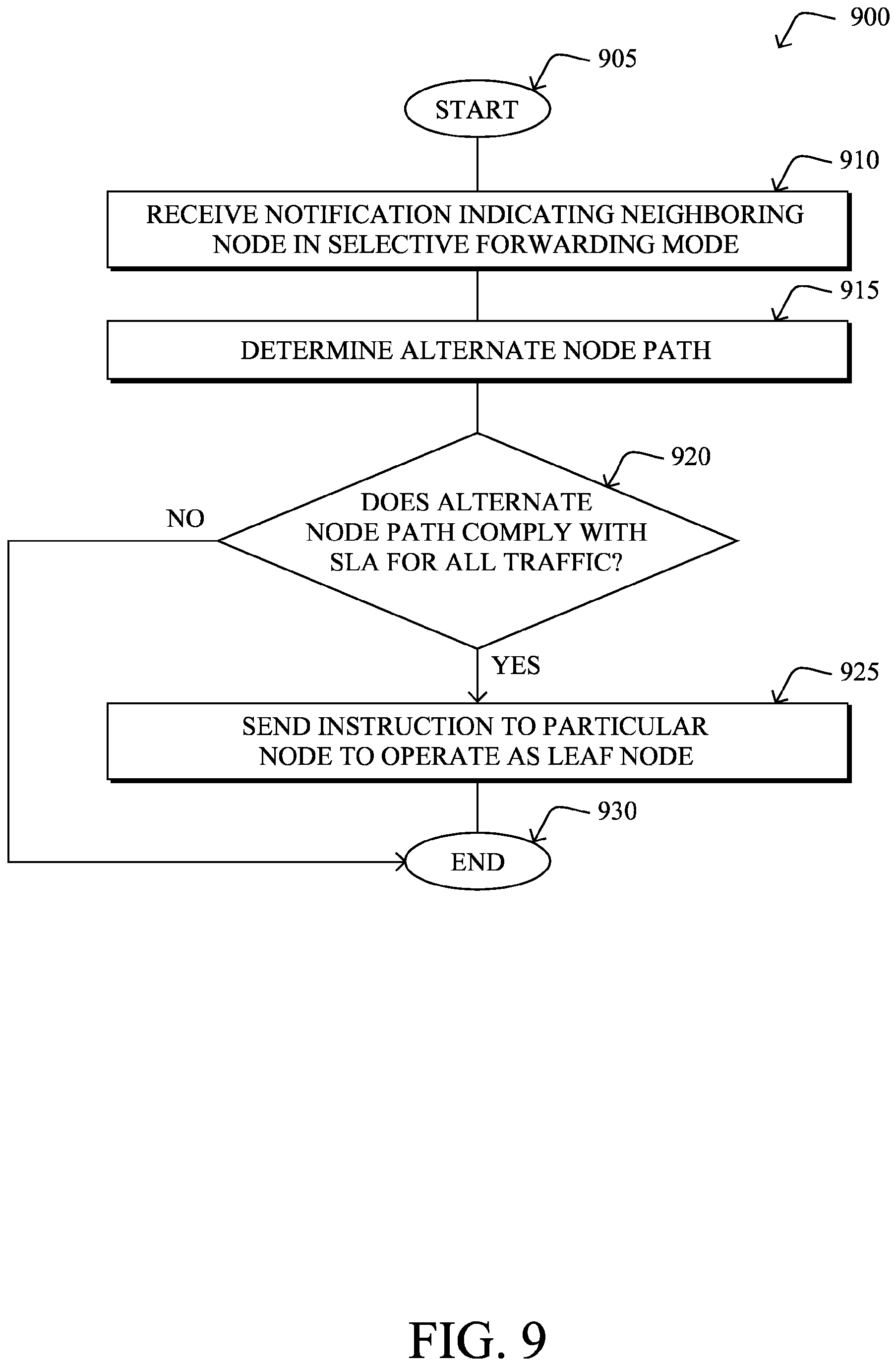