[0001] The present invention relates to a magnetic clutch architecture designed to couple mechanical power between the rotor of Brushless DC Motors (BLDC) and an external mechanical load, without using direct or indirect mechanical connection such as gears, wheels, strips or other similar arrangements.

[0002] In many common systems, the connection between different parts of the system is performed by mechanical components. A significant disadvantage of using such connecting parts is the energy loss, caused by friction. Another disadvantage caused by friction is the wear of the connecting surfaces of the parts. As the speed and force between the parts increase, so does the friction and therefore the damage to their surfaces, until they often can no longer function properly.
[0003] In systems operating at high speeds, like motors that usually operate in extremely high speeds, the friction and its outcomes are substantial, resulting in the need for many maintenance services and frequent change of parts, which require a great investment of both time and money.
[0004] The present invention relates to a device used in BLDC motors, such as the motor described in PCT patent application No. PCT/IL2013/050253.
[0005] JP 2003 199283 discloses a magnetically coupled brushless DC motor which comprises two annular and cylindrical coaxial rotors, an outer motor rotor having a continuous annular drive magnet which is configured with circumferentially alternating poles and is connected to an annular mounting portion rotatably supported in the stator, and a central rotor having a continuous annular coupling magnet which is configured with circumferentially alternating poles and is rotatably mounted by a shaft in a partition wall separating the two rotors. Coil windings to which a control current is supplied are provided with the annular stator which surrounds the outer rotor, causing the outer rotor to be rotated by the generated electromagnetic force and the inner rotor to be rotated by the magnetic coupling between the two rotors despite the presence of the partition wall. The shaft to which the central rotor is connected drives the impeller of a pump, and the partition wall protects the coil windings from the pumped fluid.
[0006] It is an object of the present invention to provide a device and method that overcome the drawbacks of the prior art.
[0007] Other objects and advantages of the invention will become apparent as the description proceeds.

Fig. 1 shows two concentric rings, provided with magnets, according to one embodiment of the invention, in a static state;

Fig. 3 shows the measurements of the force on a single couple of magnets mounted at distance d from each other and shifted linearly;

Fig. 4 shows the measurements of the force in a demo system, according to another embodiment of the invention;

Fig. 5 shows exemplary physical measures of the components in a BLDC demo system, according to another embodiment of the invention;

Fig. 6 shows a schematic setup of two magnets, according to another embodiment of the invention;

Fig. 7 shows solenoids illustrated as consisting of a collection of infinitesimal current loops, stacked one on top of the other; and

Fig. 8 shows two loops of infinitesimal thickness, each one belonging to a magnet.

are infinitesimal lengths in the direction of the current flow in the corresponding loops, and therefore they lie in the x̂ŷ plane.
[0030] Now, referring to Fig. 8, it points out several preliminary remarks:
[0031] With the above understanding, the force ΔFz in direction ẑ acting on the current loop L because of the current loop L', is the result of the following integral:

[0032] The cumulative force ΔFẑ,L applied by all the current loops on the right side on one single current loop L on the left side (see fig. 8) is given by

[0034] Changing the order of integration we obtain

is independent from z and z', and therefore is constant when integrating with respect to dz and dz', the inner integrals can be computed analytically, and yield

the total force Fẑ(h), acting on the magnet at the origin, due to the offset of the other magnet, has the form

h2 << d2
where K is some proportionality constant. Finally, recalling that M = Js is the net magnetization per unit volume in the ẑ direction, and referring to figure 6, the force acting on the left magnet is

[0038] Thus, for any offset h < d/3, the force transferred by the clutch is directly proportional to the offset h and to the square magnetization per unit volume. Moreover, the force is in direction of the offset itself.
[0039] All the above description has been provided for the purpose of illustration and is not meant to limit the invention in any way. The computations shown above are provided as an aid in understanding the invention, and should not be construed as intending to limit the invention in any way.

1. An apparatus for coupling mechanical power between the rotor of a Brushless DC Motor and an external mechanical load, comprising:

b) an equal number of magnets connected to the inner ring and to the outer ring;

d) non-geared connecting means which connect the outer ring to a mechanical load of an external system, and 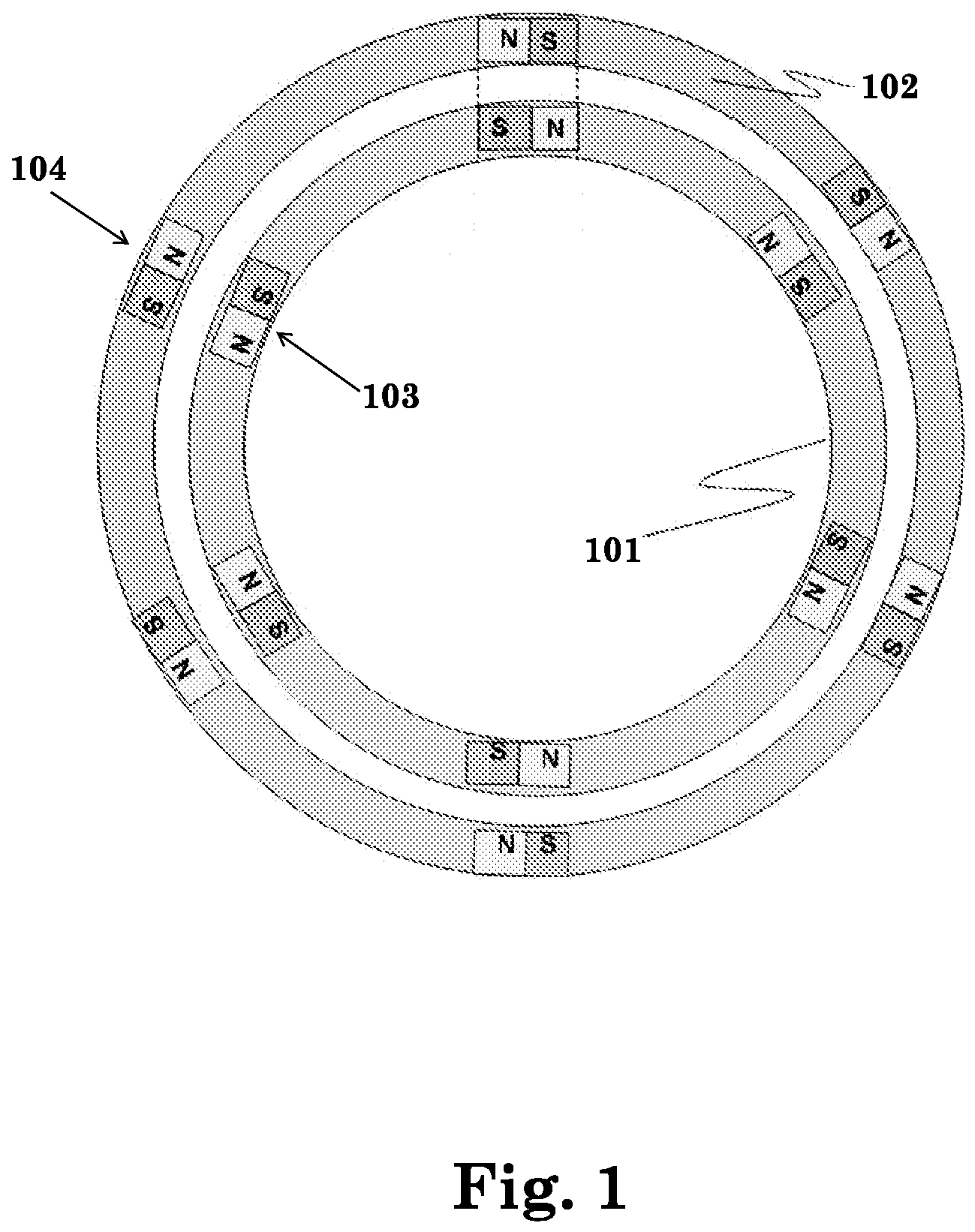 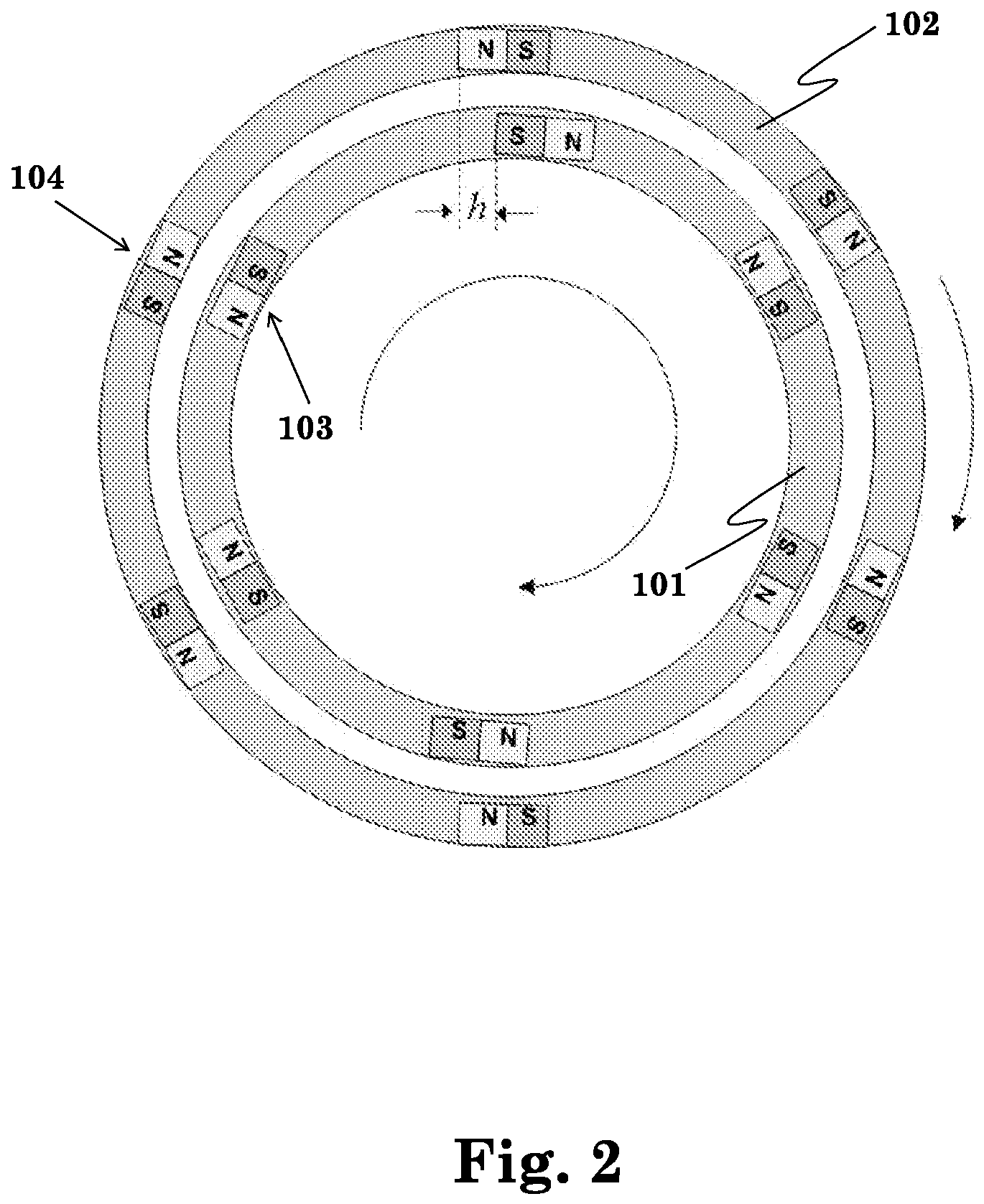 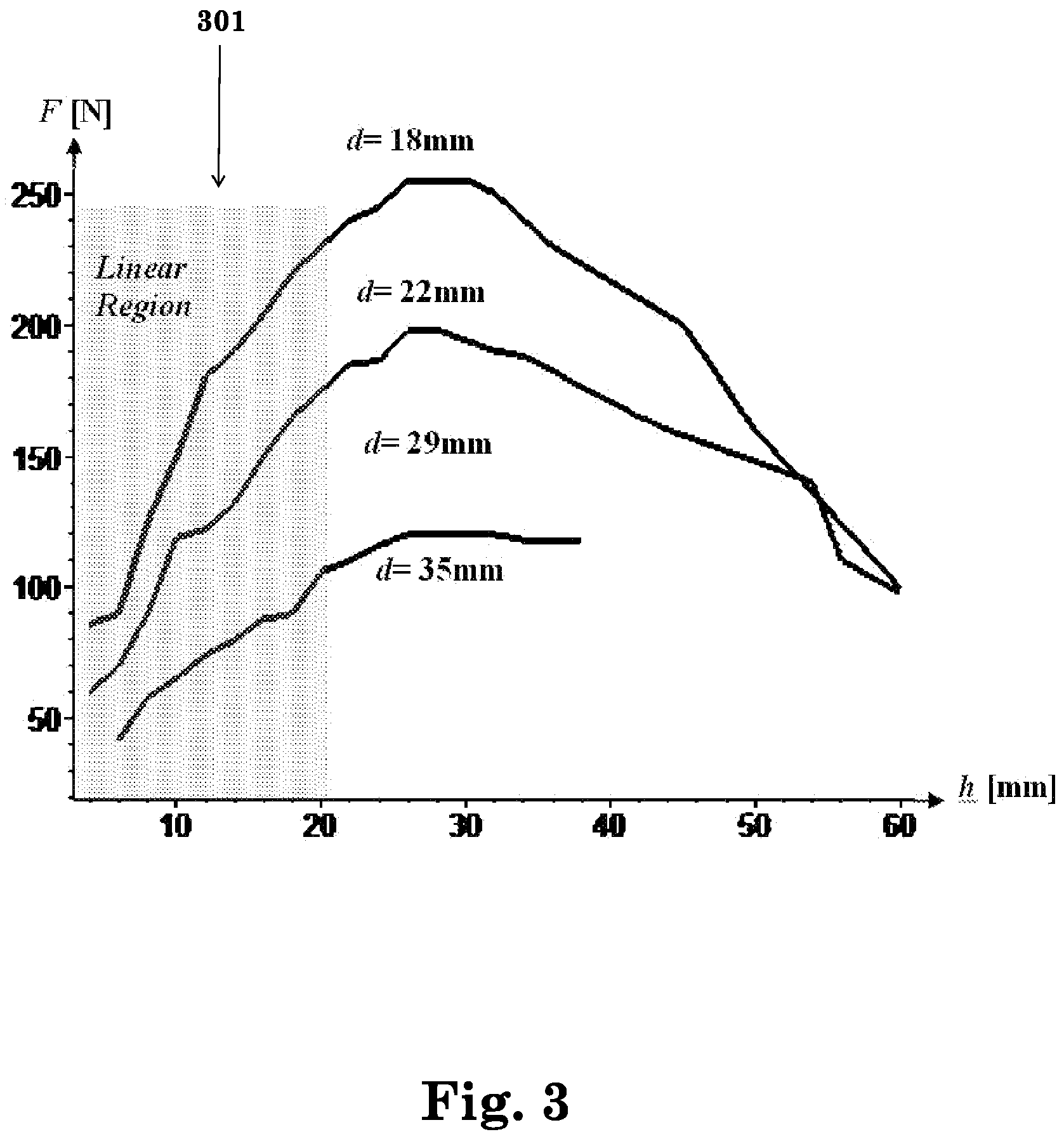 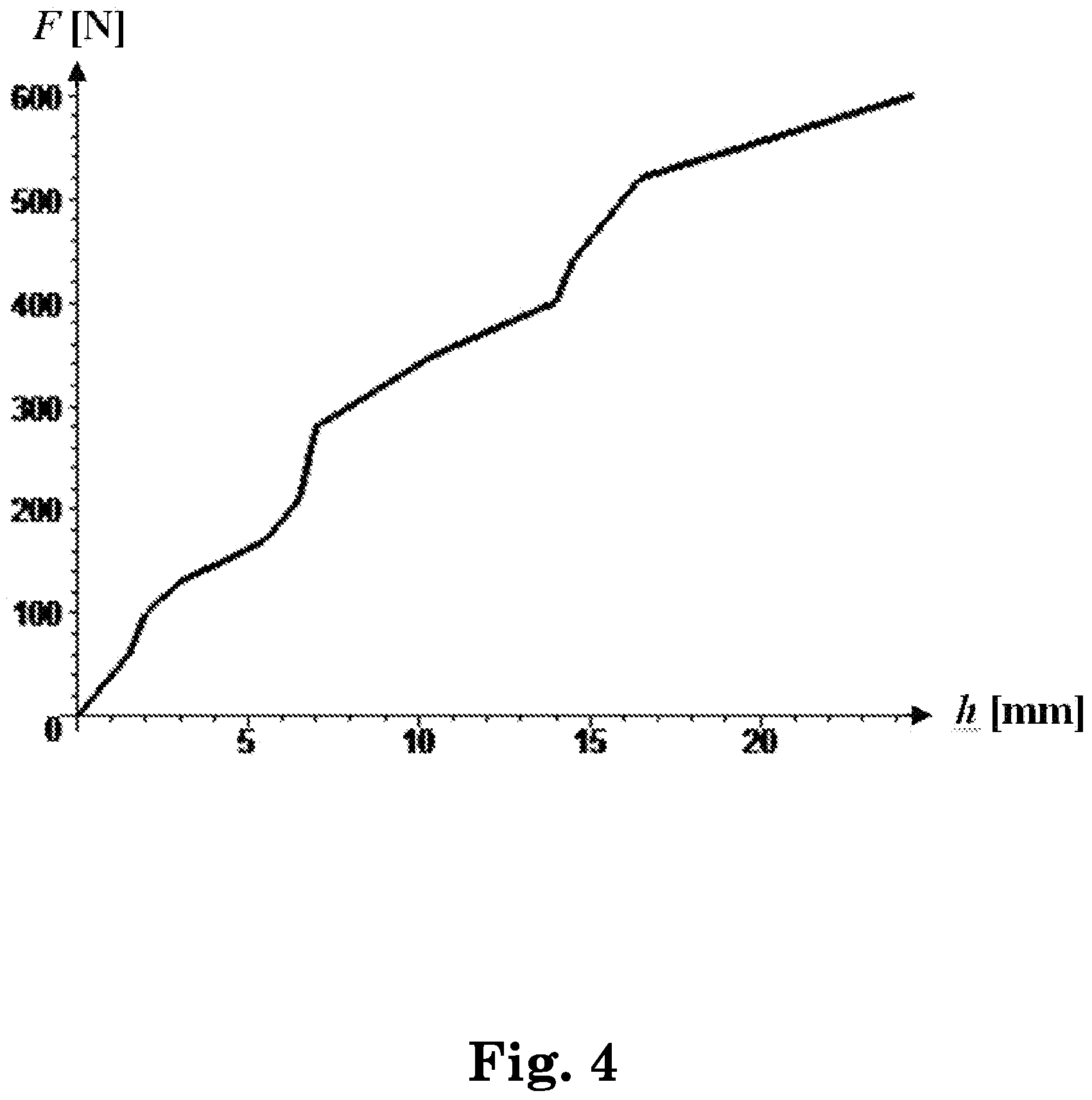 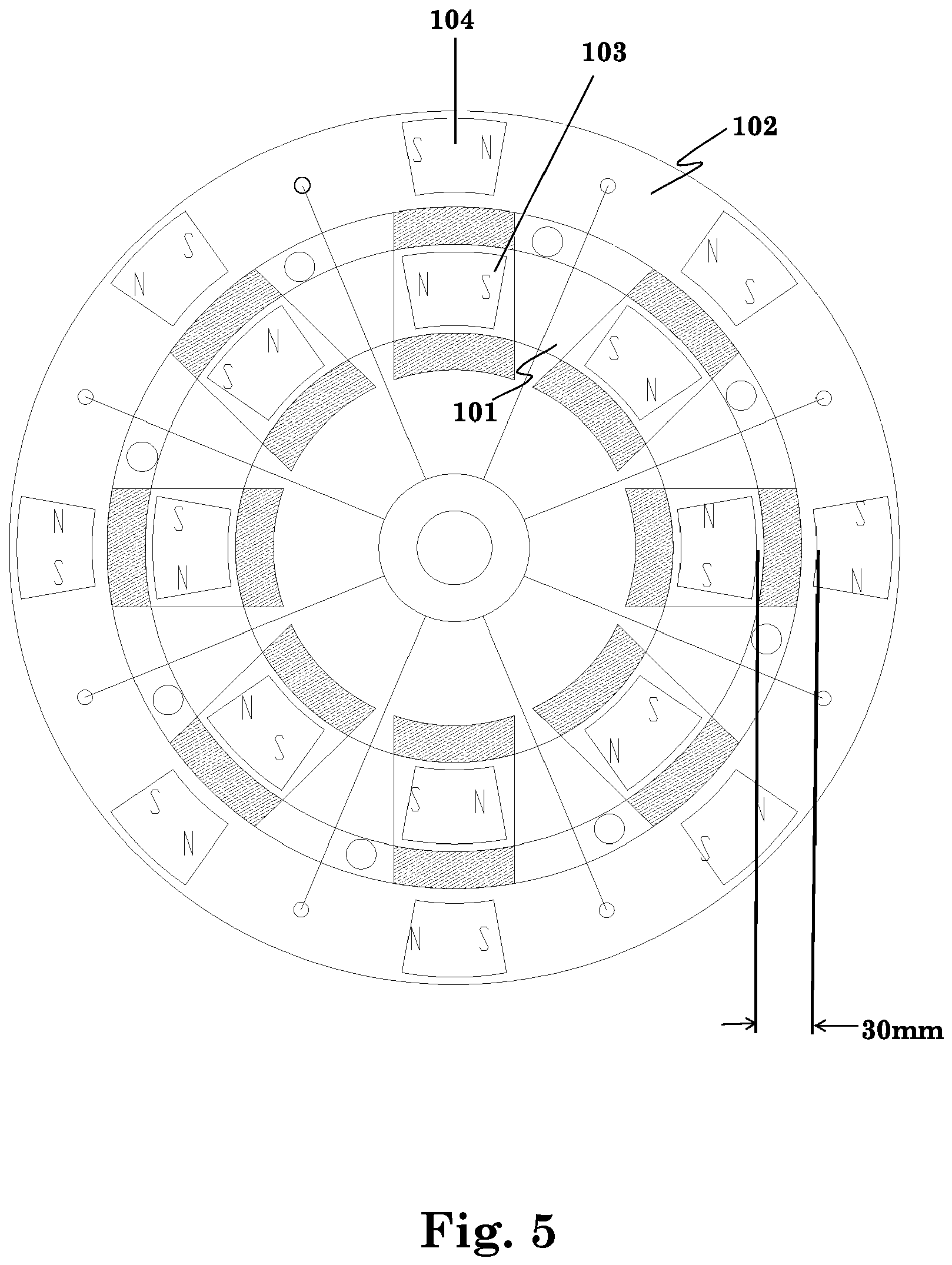 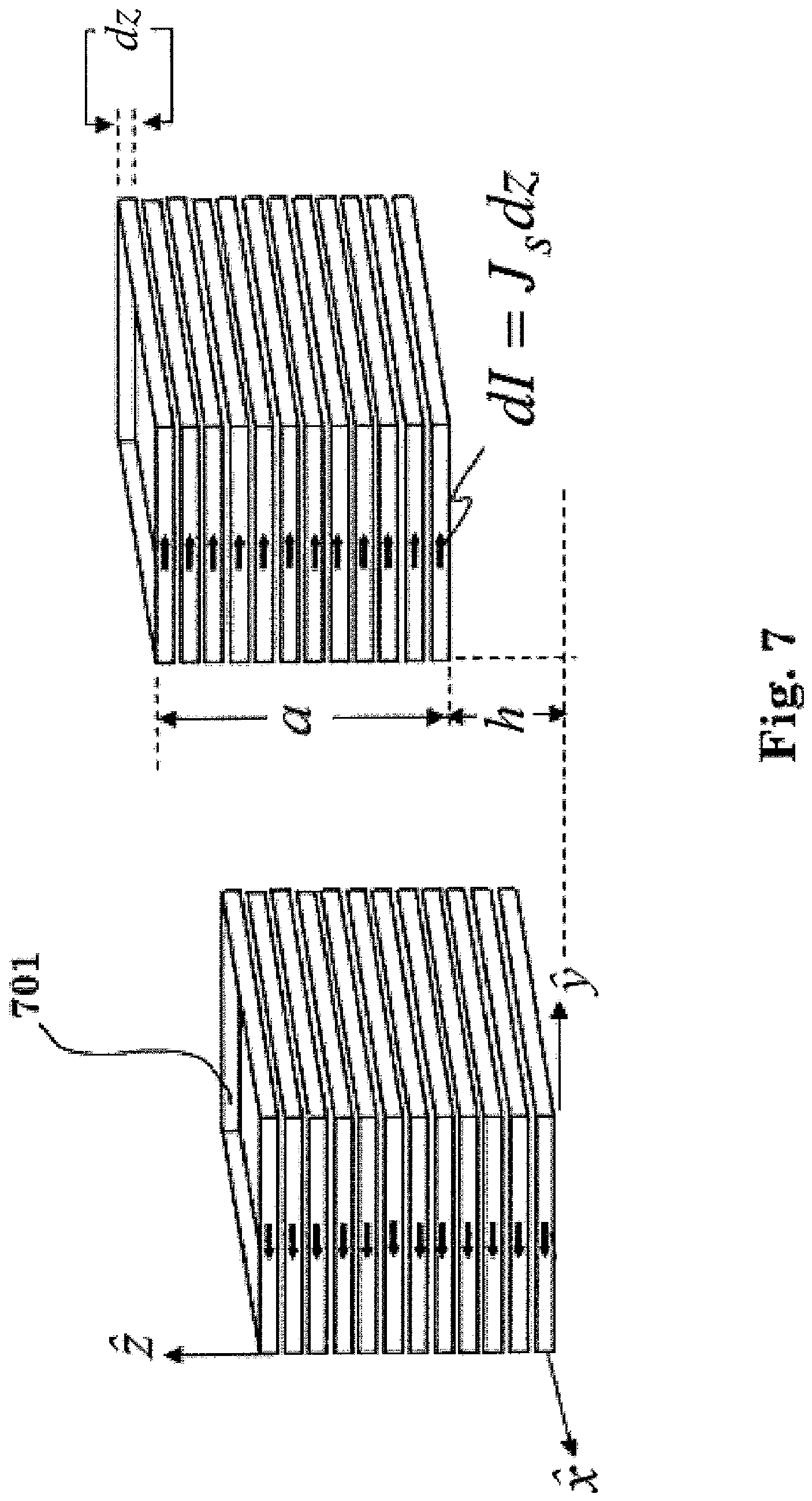