[0012] The positive electrode 54 in a typical cell 50 is a lightweight, electrically conductive material which has a porosity of greater than 80% to allow the formation and deposition/storage of Li2O2 in the cathode volume. The ability to deposit the Li2O2 directly determines the maximum capacity of the cell. In order to realize a battery system with a specific energy of 600 Wh/kg or greater, a plate with a thickness of 100 µm must have a capacity of about 20 mAh/cm2.
[0013] Materials which provide the needed porosity include carbon black, graphite, carbon fibers, carbon nanotubes, and other non-carbon materials. There is evidence that each of these carbon structures undergo an oxidation process during charging of the cell, due at least in part to the harsh environment in the cell (pure oxygen, superoxide and peroxide ions, formation of solid lithium peroxide on the cathode surface, and electrochemical oxidation potentials of >3V (vs. Li/Li+)).
[0014] While there is a clear benefit to couples that include oxygen as a positive electrode and metals, alloys of metals, or other materials as a negative electrode, none of these couples has seen commercial demonstration thus far because of various challenges. A number of investigations into the problems associated with Li-oxygen batteries have been conducted as reported, for example, by Beattie, S., D. Manolescu, and S. Blair, "High-Capacity Lithium-Air Cathodes," Journal of the Electrochemical Society, 2009. 156: p. A44, Kumar, B., et al., "A Solid-State, Rechargeable, Long Cycle Life Lithium-Air Battery, " Journal of the Electrochemical Society, 2010. 157: p. A50, Read, J., "Characterization of the lithium/oxygen organic electrolyte battery," Journal of the Electrochemical Society, 2002. 149: p. A1190, Read, J., et al., "Oxygen transport properties of organic electrolytes and performance of lithium/oxygen battery," Journal of the Electrochemical Society, 2003. 150: p. A1351, Yang, X. and Y. Xia, "The effect of oxygen pressures on the electrochemical profile of lithium/oxygen battery," Journal of Solid State Electrochemistry: p. 1-6, and Ogasawara, T., et al., "Rechargeable Li2O2 Electrode for Lithium Batteries," Journal of the American Chemical Society, 2006. 128(4): p. 1390-1393.
[0015] While some issues have been investigated, several challenges remain to be addressed for lithium-oxygen batteries. These challenges include limiting dendrite formation at the lithium metal surface, protecting the lithium metal (and possibly other materials) from moisture and other potentially harmful components of air (if the oxygen is obtained from the air), designing a system that achieves acceptable specific energy and specific power levels, reducing the hysteresis between the charge and discharge voltages (which limits the round-trip energy efficiency), and improving the number of cycles over which the system can be cycled reversibly.
[0016] The limit of round trip efficiency occurs due to an apparent voltage hysteresis as depicted in FIG. 4. In FIG. 4, the discharge voltage 70 (approximately 2.5 to 3 V vs. Li/Li+) is much lower than the charge voltage 72 (approximately 4 to 4.5 V vs. Li/Li+). The equilibrium voltage 74 (or open-circuit potential) of the lithium/oxygen system is approximately 3 V. Hence, the voltage hysteresis is not only large, but also very asymmetric.
[0017] The large over-potential during charge may be due to a number of causes. For example, reaction between the Li2O2 and the conducting matrix 62 may form an insulating film between the two materials. Additionally, there may be poor contact between the solid discharge products Li2O2 or Li2O and the electronically conducting matrix 62 of the positive electrode 54. Poor contact may result from oxidation of the discharge product directly adjacent to the conducting matrix 62 during charge, leaving a gap between the solid discharge product and the matrix 52.
[0018] Another mechanism resulting in poor contact between the solid discharge product and the matrix 62 is complete disconnection of the solid discharge product from the conducting matrix 62. Complete disconnection of the solid discharge product from the conducting matrix 62 may result from fracturing, flaking, or movement of solid discharge product particles due to mechanical stresses that are generated during charge/discharge of the cell. Complete disconnection may contribute to the capacity decay observed for most lithium/oxygen cells. By way of example, FIG. 5 depicts the discharge capacity of a typical Li/oxygen cell over a period of charge/discharge cycles.
[0019] Other physical processes which cause voltage drops within an electrochemical cell, and thereby lower energy efficiency and power output, include mass-transfer limitations at high current densities. The transport properties of aqueous electrolytes are typically better than nonaqueous electrolytes, but in each case mass-transport effects can limit the thickness of the various regions within the cell, including the cathode. Reactions among O2 and other metals may also be carried out in various media.
[0020] In systems using oxygen as a reactant, the oxygen may either be carried on board the system or obtained from the atmosphere. There are both advantages and disadvantages to operating a battery that reacts gaseous oxygen in a closed format by use of a tank or other enclosure for the oxygen. One advantage is that if the reaction chemistry is sensitive to any of the other components of air (e.g., H2O, CO2), only pure oxygen can be added to the enclosure so that such contaminants are not present. Other advantages are that the use of an enclosure can allow for the operation at a high partial pressure of oxygen at the site of the reaction (for uncompressed atmospheric air the pressure of oxygen is only 0.21 bar), can prevent any volatile species from the leaving the system (i.e., prevent "dry out"), and other advantages. The disadvantages include the need to carry the oxygen at all times, increasing the system mass and volume, potential safety issues associated with high-pressure oxygen, and others.
[0021] In order to realize the advantages that come with the use of a closed system in a vehicle it is necessary to compress the oxygen so that the oxygen volume is not too large on board the vehicle. In particular, a pressure in the fully charged state of greater than 100 bar, such as 350 bar (about 5000 psi), is desirable.
[0022] What is therefore needed is an economic, efficient, and compact method to compress and store the oxygen produced during the charge of a battery system that consumes oxygen on discharge

[0023] The vehicular battery system according to the present invention is defined in independent claim 1.

[0024] The above-described features and advantages, as well as others, should become more readily apparent to those of ordinary skill in the art by reference to the following detailed description and the accompanying figures in which:

FIG. 2 depicts a chart of the specific energy and energy density of various lithium-based cells;

FIG. 3 depicts a prior art lithium-oxygen (Li/oxygen) cell including two electrodes, a separator, and an electrolyte;

FIG. 4 depicts a discharge and charge curve for a typical Li/oxygen electrochemical cell;

FIG. 5 depicts a plot showing decay of the discharge capacity for a typical Li/oxygen electrochemical cell over a number of cycles;

FIG. 6 depicts a schematic view of a vehicle with an adiabatic compressor operably connected to a reservoir configured to exchange oxygen with a positive electrode for a reversible reaction with lithium;

FIG. 9 depicts a chart showing the increase in temperature when a gas is adiabatically compressed starting from a pressure of 1 bar and a temperature of 298.15 K with constant gas properties (i.e., gamma) assumed;

FIG. 10 depicts a chart showing compression work for an ideal gas (diatomic and constant properties are assumed for adiabatic) as a function of pressure with the initial pressure at one bar; and

FIG. 11 depicts a process for how the temperature of the final compressed gas or of the gas at an intermediate stage is used by the battery control system to change the flow rate of the cooling fluid to ensure the correct final temperature is reached.

an oxygen reservoir (104) having a first outlet and a first inlet;

a multistage compressor (108) supported by the vehicle (100) and having a second inlet and a second outlet, the second outlet operably connected to the first inlet;

shutoff valves and couples to allow for isolation and removal of one or more of the oxygen reservoir (104), the vehicular battery system stack (102), and the multistage compressor (188).

3. The vehicular battery system of claim 2, wherein the vent (106) is positioned on the oxygen reservoir (104).

4. The vehicular battery system of claim 2, wherein the vent is positioned on the multistage compressor (108).

at least one sensor configured to generate a signal associated with a temperature within the vehicular battery system;

a processor operably connected to the memory, the at least one sensor, and the cooling system, the processor configured to execute program instructions stored within the memory to:

obtain the signal generated by the at least one sensor, and

control a flow of the coolant to the multistage compressor (108) based upon the obtained signal.

the at least one sensor includes a first sensor located at the second outlet; and

the processor is further configured to execute the program instructions to

obtain a first signal generated by the first sensor, and

control the flow of the coolant to the multistage compressor (108) based upon the obtained first signal.

the processor is further configured to execute the program instructions to

obtain a second signal generated by the second sensor, and

control a flow of the coolant to the cooler based upon the obtained second signal. 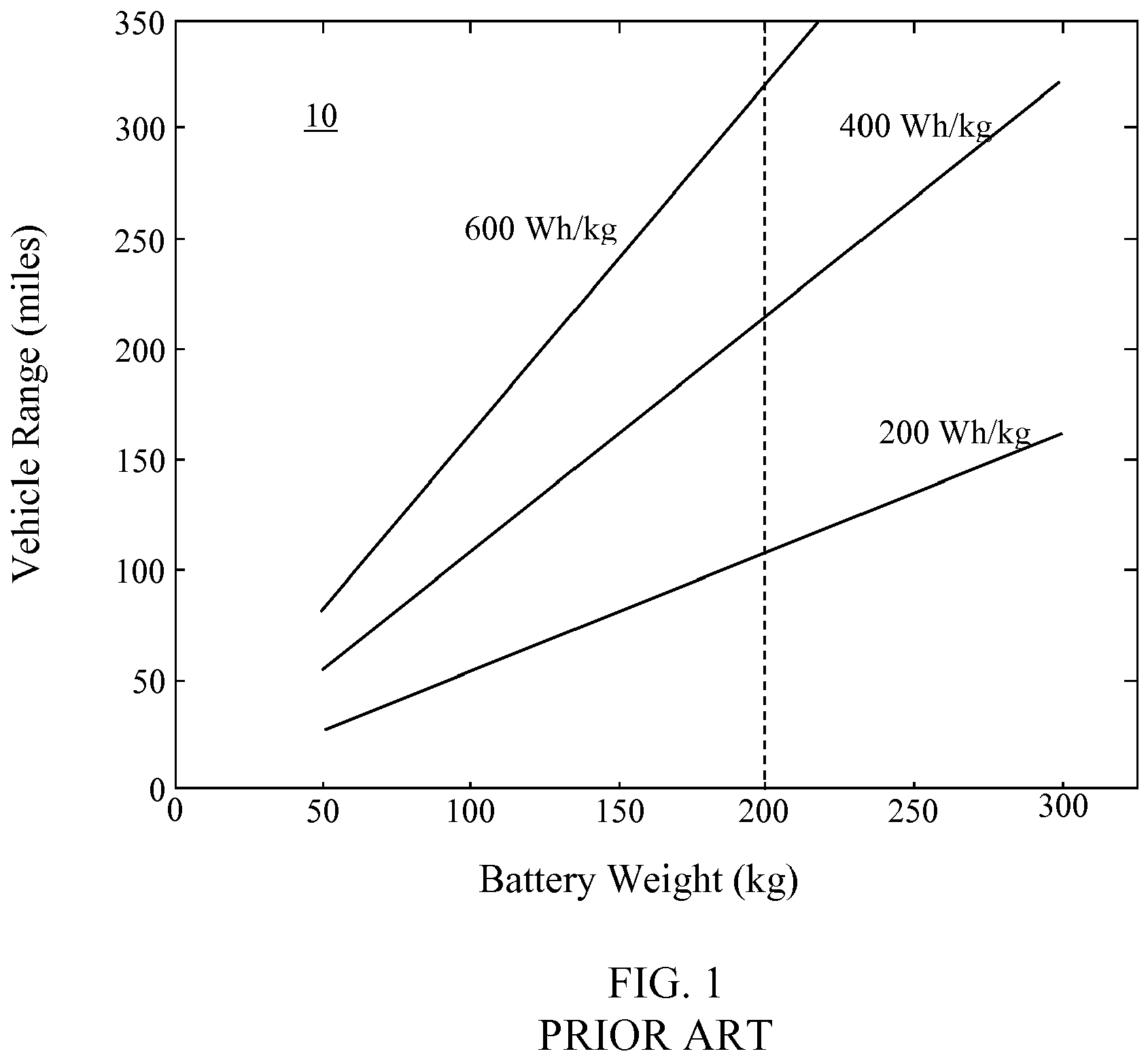 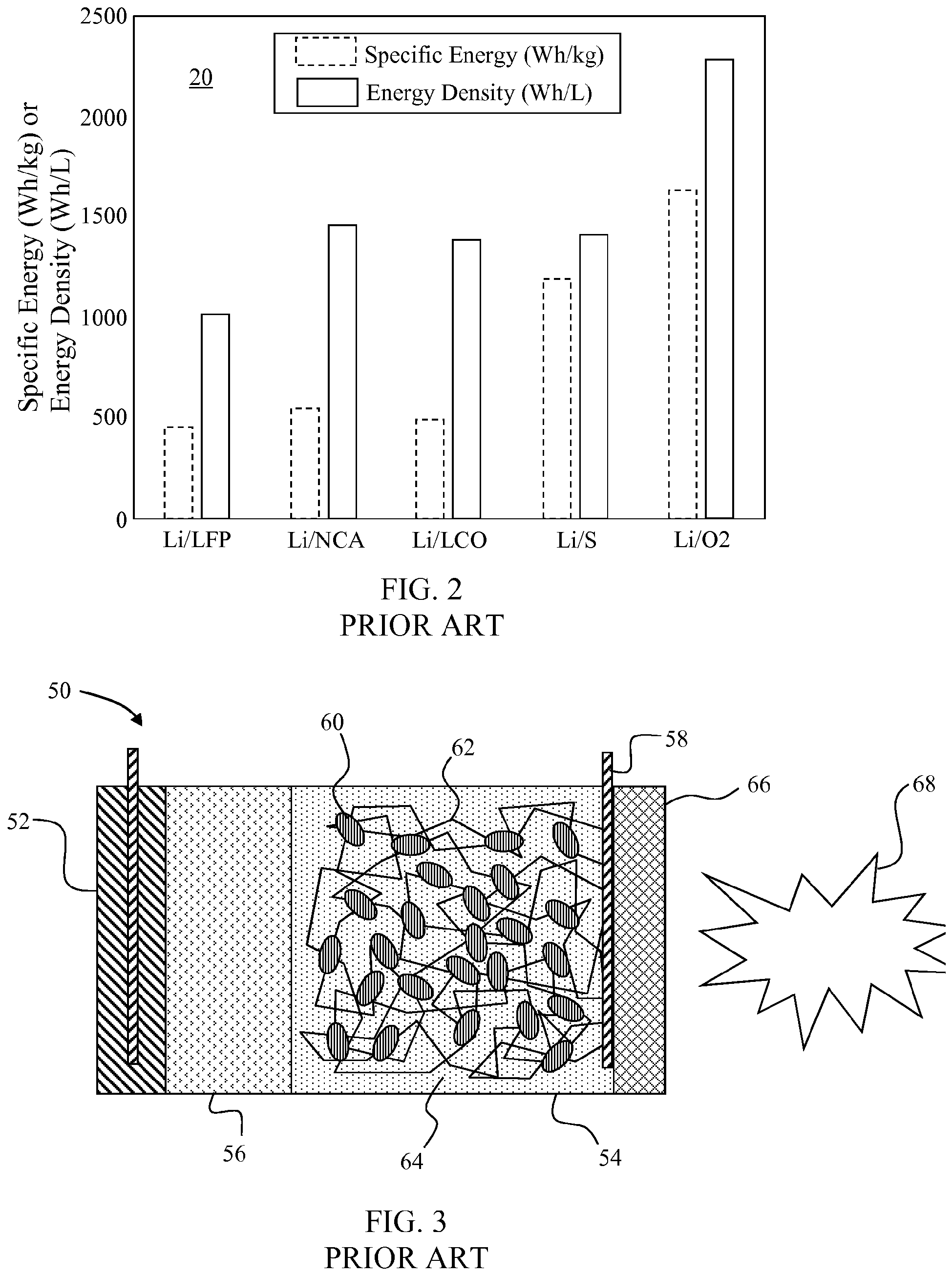 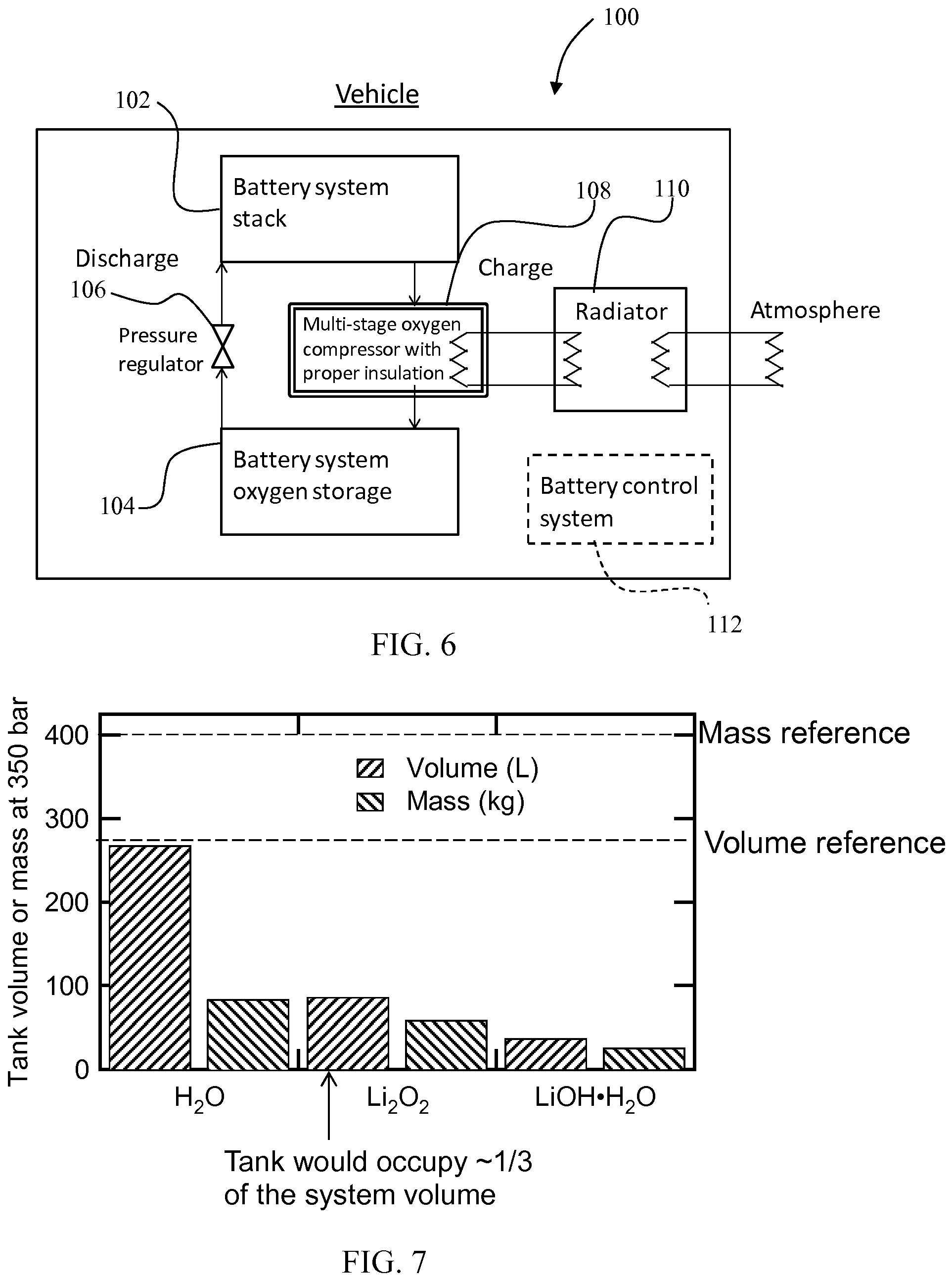 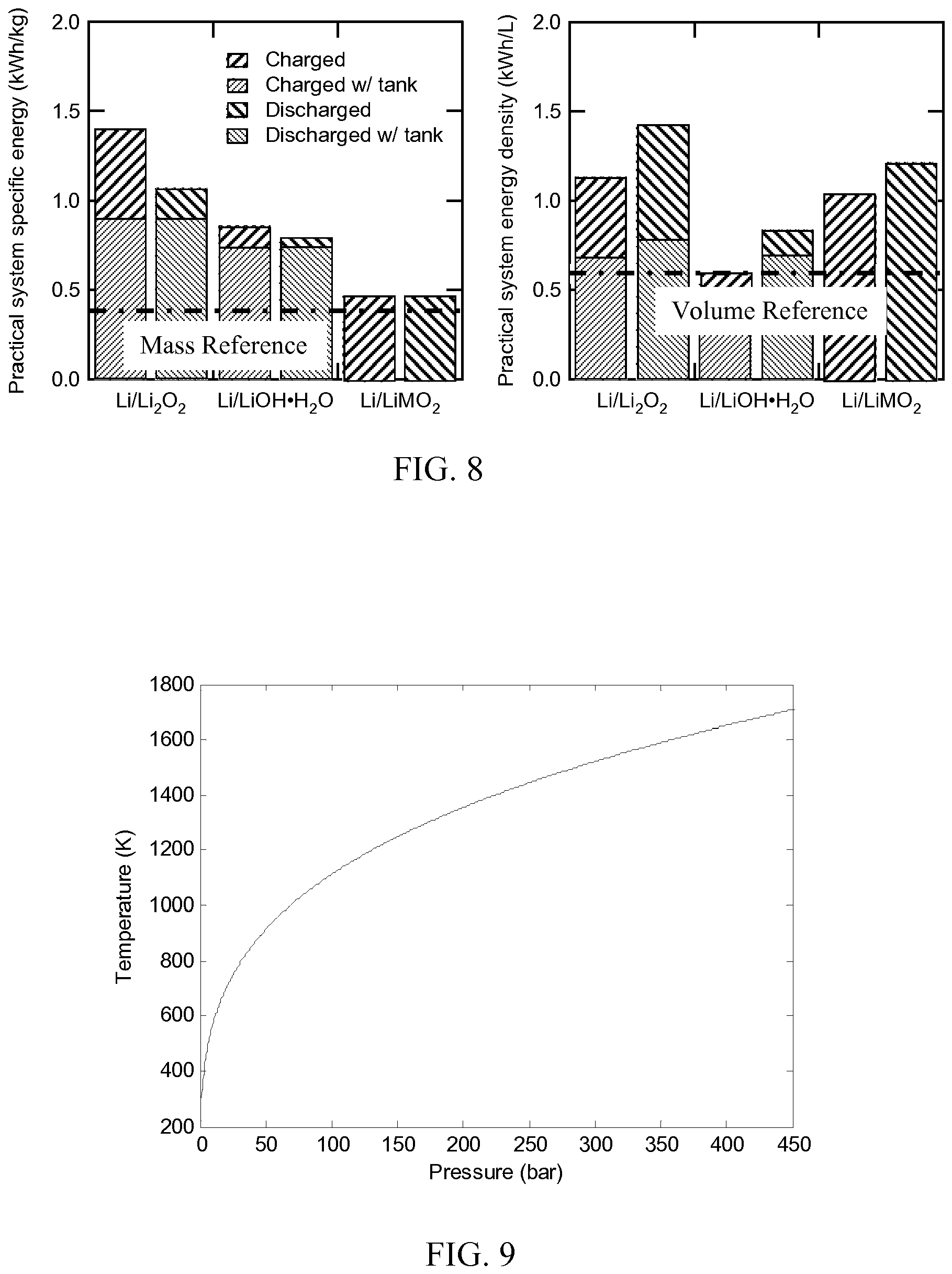 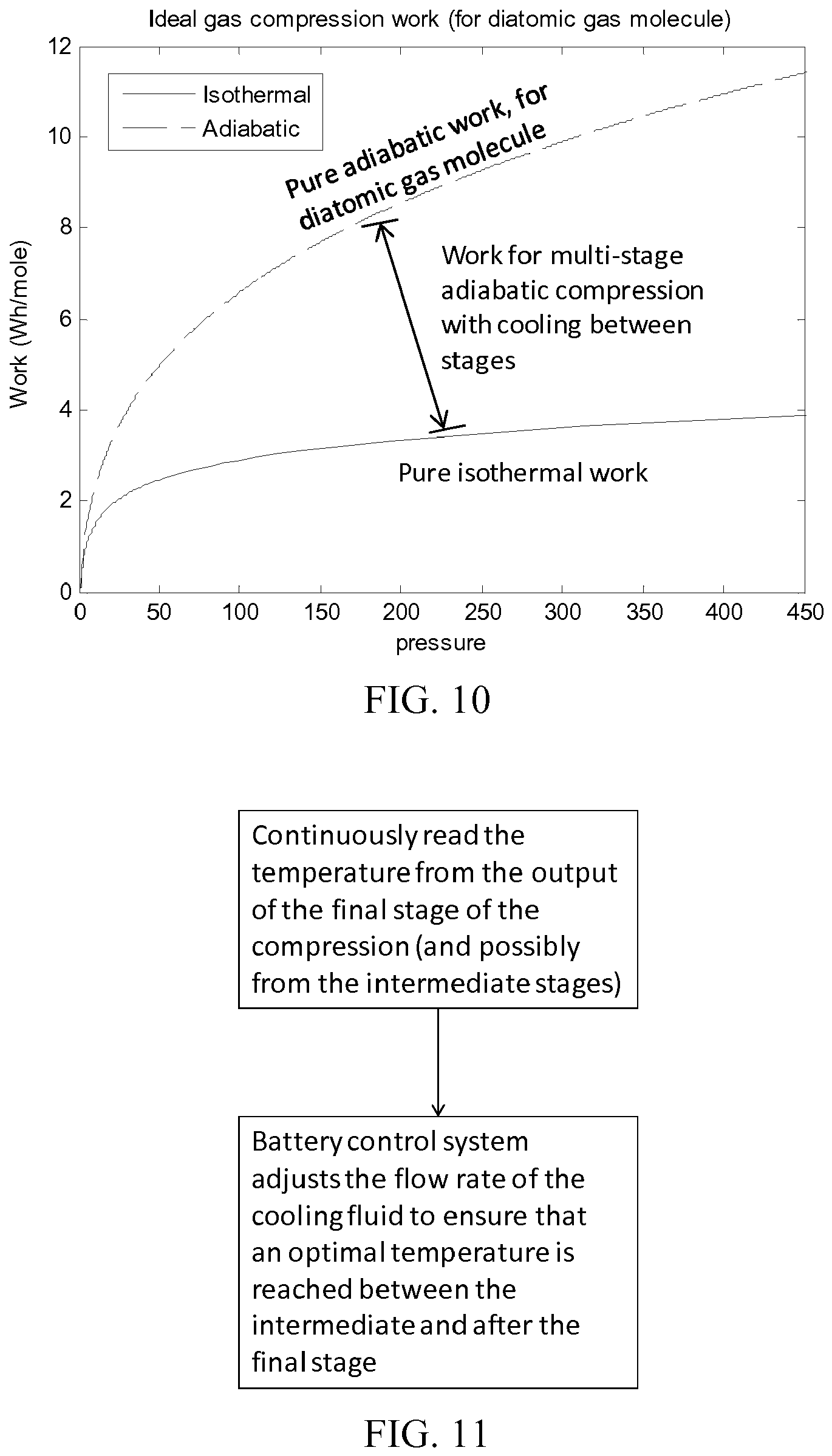