FIG. 1A is a schematic drawing of an exemplary valve in an open position during peak flow.

FIG. 1B is a schematic drawing of the valve of FlG. 1A in a closed position to prevent backflow of the fluid across the valve.

FIG. 2A is a schematic drawing of a top view illustrating the anatomy of a typical aortic valve.

FIG. 2B is a schematic drawing of a cross-sectional view of the aortic valve of FIG. 2A.

FIG. 2C is a schematic perspective view of the aortic valve of FIG. 2A showing the inflow end, outflow end, and commissures in phantom lines.

FIG. 3 is a schematic representation of the geometry and relative dimensions of the valve sinus region.

FIG. 4 is a schematic perspective view of a valve replacement system, which includes a replacement valve, a valve support structure (or "frame"), and a valve cuff.

FIG. 5 is a schematic perspective view of the valve of FIG. 4.

FIGS. 6-7 are schematic sectional plan views of roughly half of an embodiment of a prosthetic valve frame.

FIG. 8 is schematic view of the outflow portion of the frame depicted in FIGS. 6-7, in which portions are depicted as being separated.

FIG. 9 is schematic drawing of a frame according to an embodiment described herein.

FIGS. 10-17 are schematic drawings of frames or prosthetic valves according to various embodiments described herein.

FIG. 18 is a graph of overall length of various prototype frames described herein.

FIG. 19 is a graph of height and depth of various prototype frames described herein.

FIGS. 20-36 are schematic drawings of prototype frames or prosthetic valves according to various embodiments described herein.

[0021] The schematic drawings in are not necessarily to scale. Like numbers used in the figures refer to like components, steps and the like. However, it will be understood that the use of a number to refer to a component in a given figure is not intended to limit the component in another figure labeled with the same number. In addition, the use of different numbers to refer to components is not intended to indicate that the different numbered components cannot be the same or similar.

[0076] All scientific and technical terms used herein have meanings commonly used in the art unless otherwise specified. The definitions provided herein are to facilitate understanding of certain terms used frequently herein and are not meant to limit the scope of the present disclosure.
[0077] As used in this specification and the appended claims, the singular forms "a", "an", and "the" encompass embodiments having plural referents, unless the content clearly dictates otherwise.
[0078] As used in this specification and the appended claims, the term "or" is generally employed in its sense including "and/or" unless the content clearly dictates otherwise. The term "and/or" means one or all of the listed elements or a combination of any two or more of the listed elements.
[0079] As used herein, "have", "having", "include", "including", "comprise", "comprising" or the like are used in their open ended sense, and generally mean "including, but not limited to". It will be understood that "consisting essentially of", "consisting of", and the like are subsumed in "comprising" and the like. As used herein, "consisting essentially of," as it relates to a composition, article, system, method or the like, means that the components of the composition, article, system, method or the like are limited to the enumerated components and any other components that do not materially affect the basic and novel characteristic(s) of the composition, article, system, method or the like.
[0080] The words "preferred" and "preferably" refer to embodiments of the disclosure that may afford certain benefits, under certain circumstances. However, other embodiments may also be preferred, under the same or other circumstances. Furthermore, the recitation of one or more preferred embodiments does not imply that other embodiments are not useful, and is not intended to exclude other embodiments from the scope of the disclosure, including the claims.
[0081] Also herein, the recitations of numerical ranges by endpoints include all numbers subsumed within that range (e.g., 1 to 5 includes 1, 1.5, 2, 2.75, 3, 3.80, 4, 5, etc. or 10 or less includes 10, 9.4, 7.6, 5, 4.3, 2.9, 1.62, 0.3, etc.). Where a range of values is "up to" a particular value, that value is included within the range.
[0082] As used herein, the term "about" encompasses the range of experimental error that occurs in any measurement or manufacturing tolerances that may result in variances.
[0083] As used herein, "exemplary" means serving as an example and does not necessarily imply that the example is preferable or the best of its kind.
[0084] Spatially related terms, including but not limited to, "top", bottom", "front", "rear", "lower", "upper", "beneath", "below", "above", and "on top", if used herein, are utilized for ease of description to describe spatial relationships of an element(s) to another. Such spatially related terms encompass different orientations of the device in use or operation in addition to the particular orientations depicted in the figures and described herein. For example, if an element depicted in the figures is turned over or flipped over, portions previously described as below or beneath other elements would then be above those other elements.
[0085] In the detailed description above several specific embodiments of compounds, compositions, articles, systems and methods are disclosed. The detailed description, therefore, is not to be taken in a limiting sense.
[0086] Thus, embodiments of PROSTHETIC VALVES AND ASSOCIATED APPARATUSES, SYSTEMS AND METHODS are disclosed. One skilled in the art will appreciate that the heart valves and associated apparatuses, systems and methods described herein can be practiced with embodiments other than those disclosed. The disclosed embodiments are presented for purposes of illustration and not limitation. 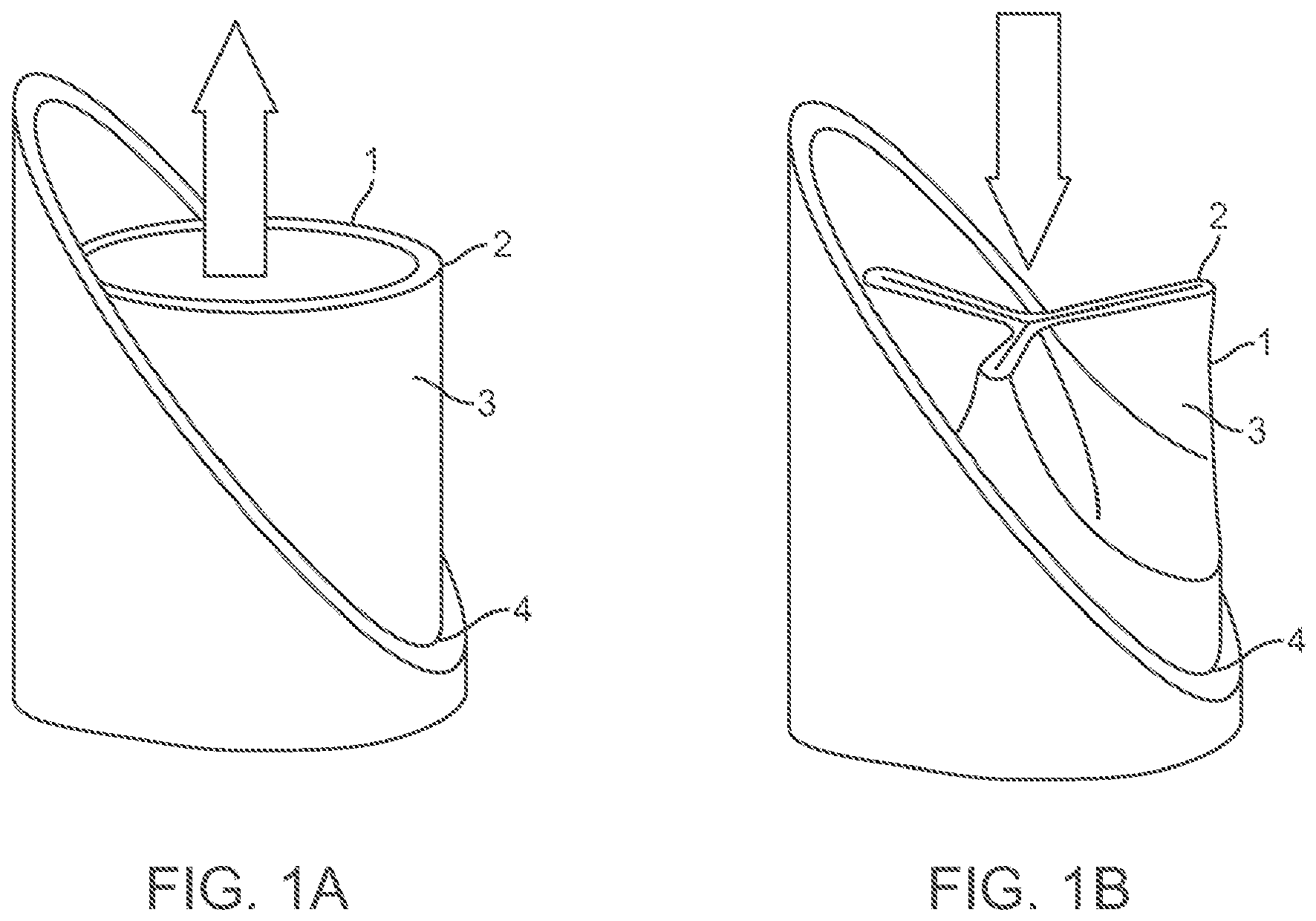 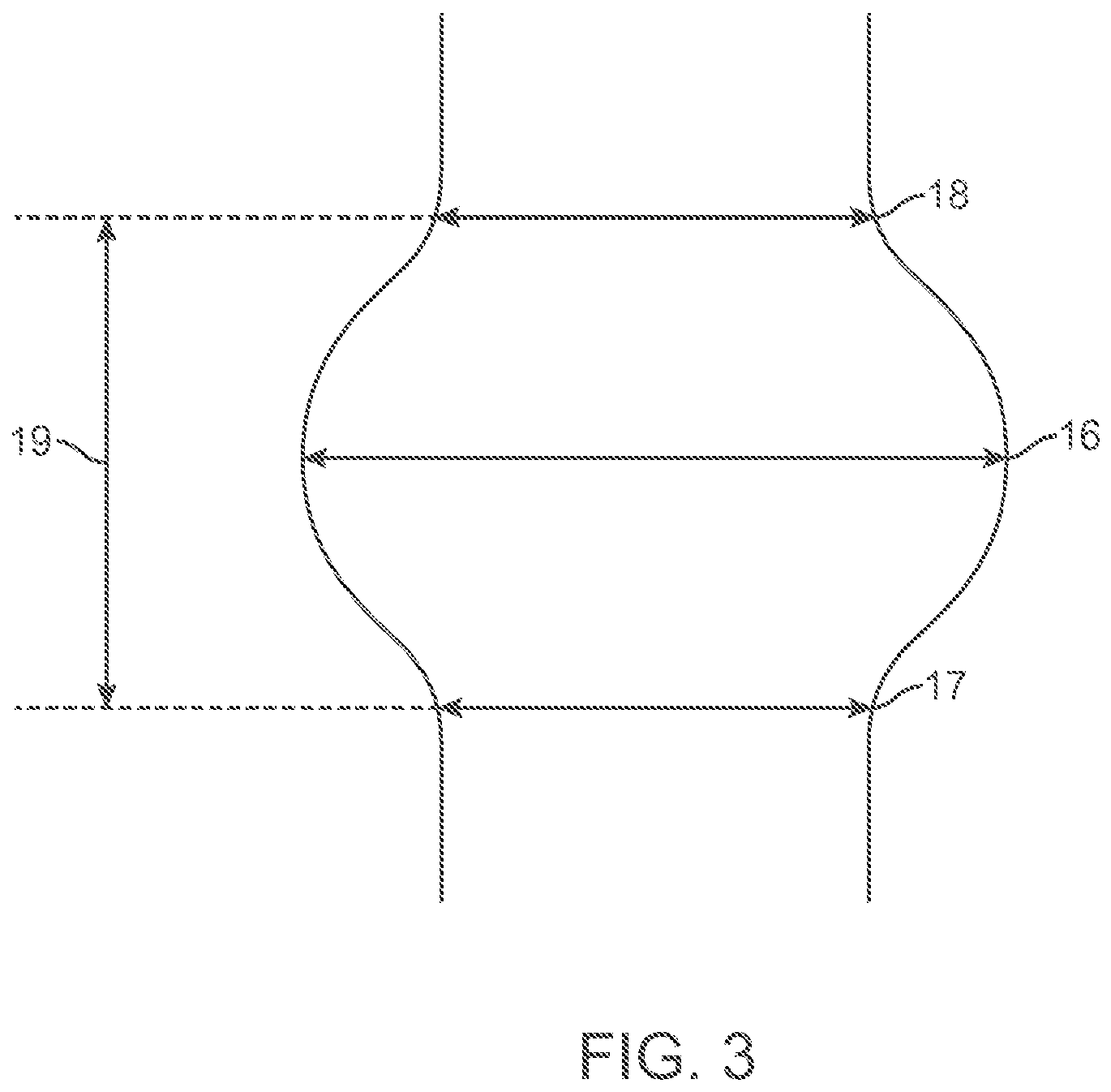 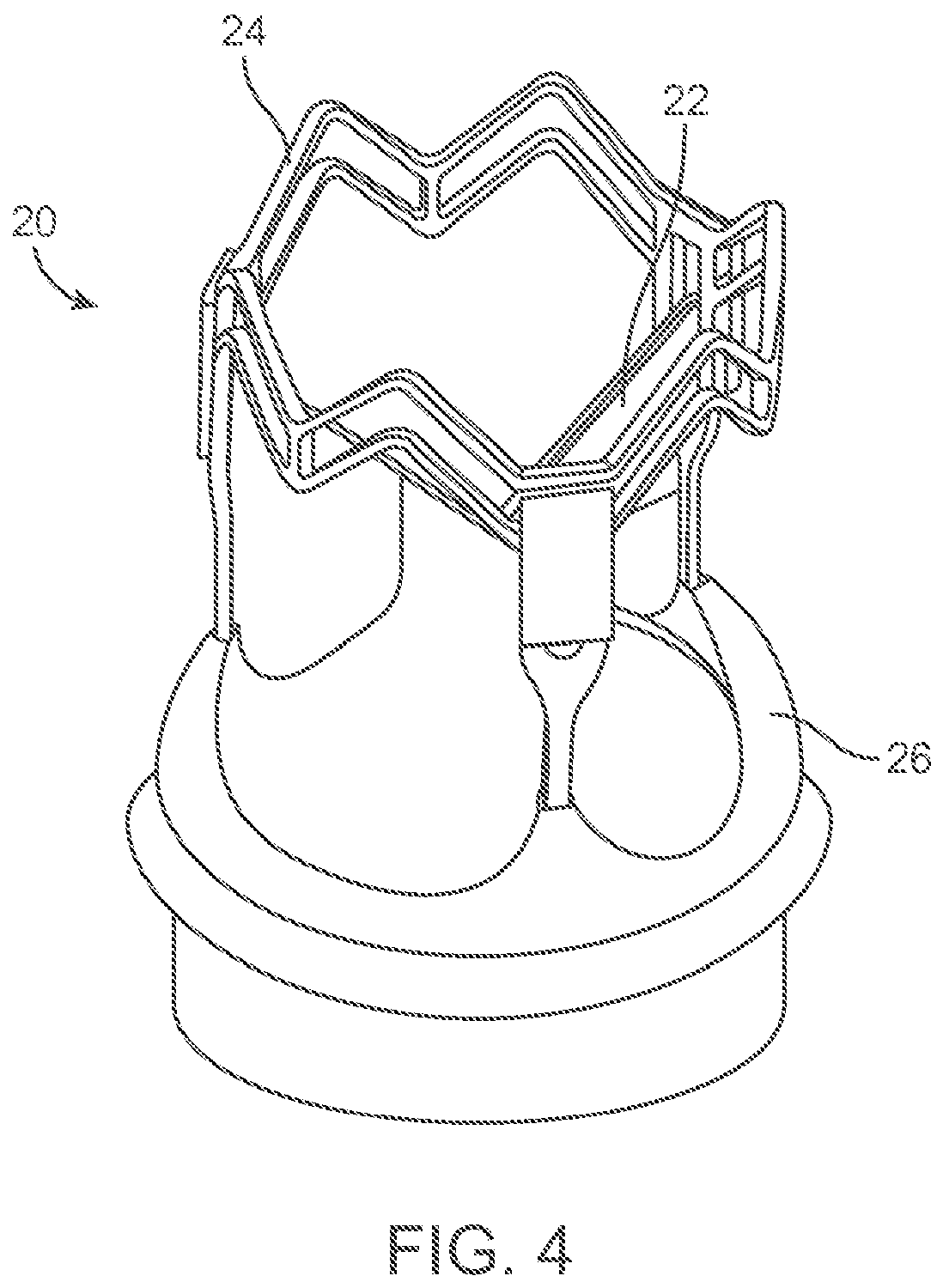 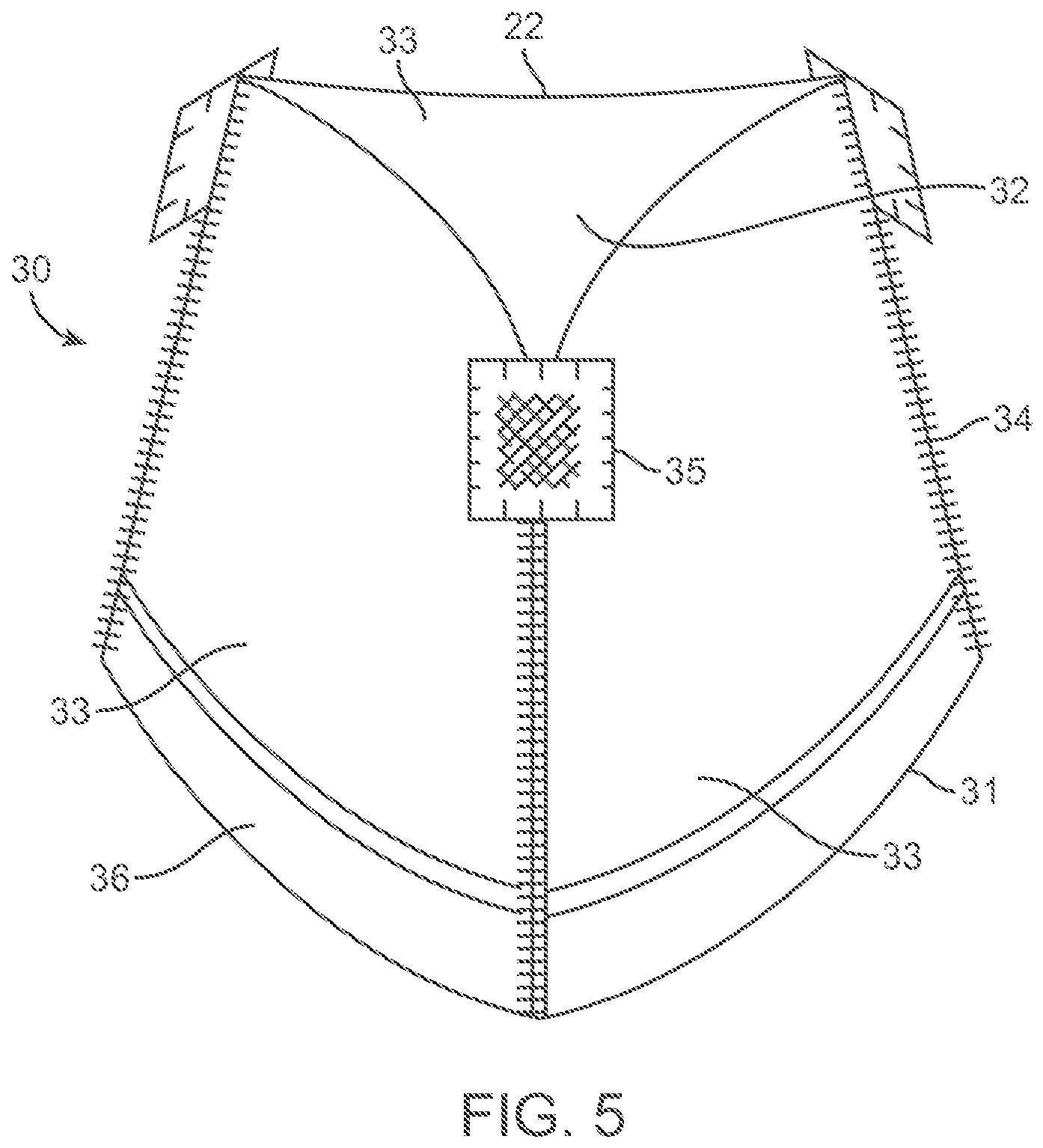 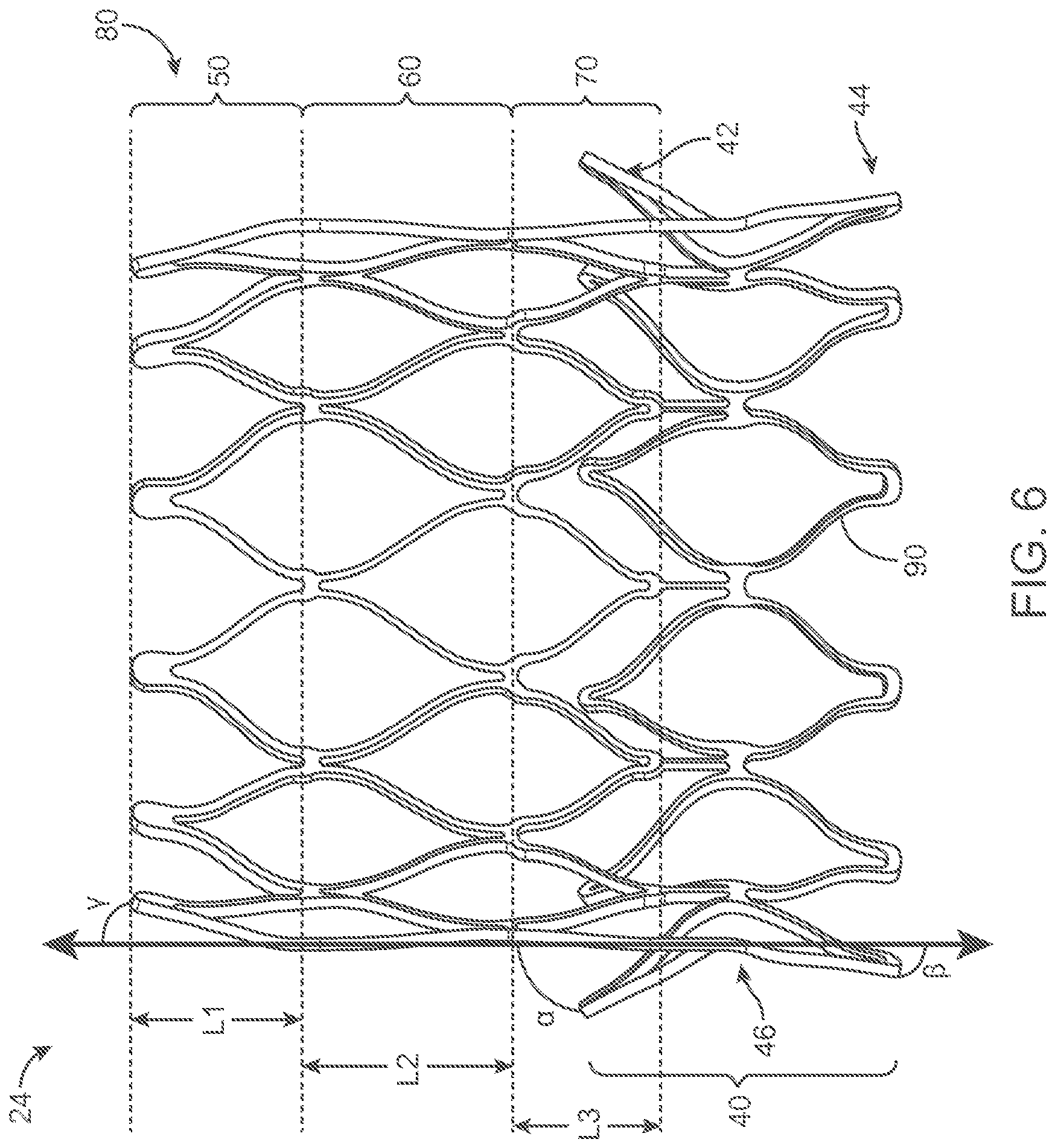 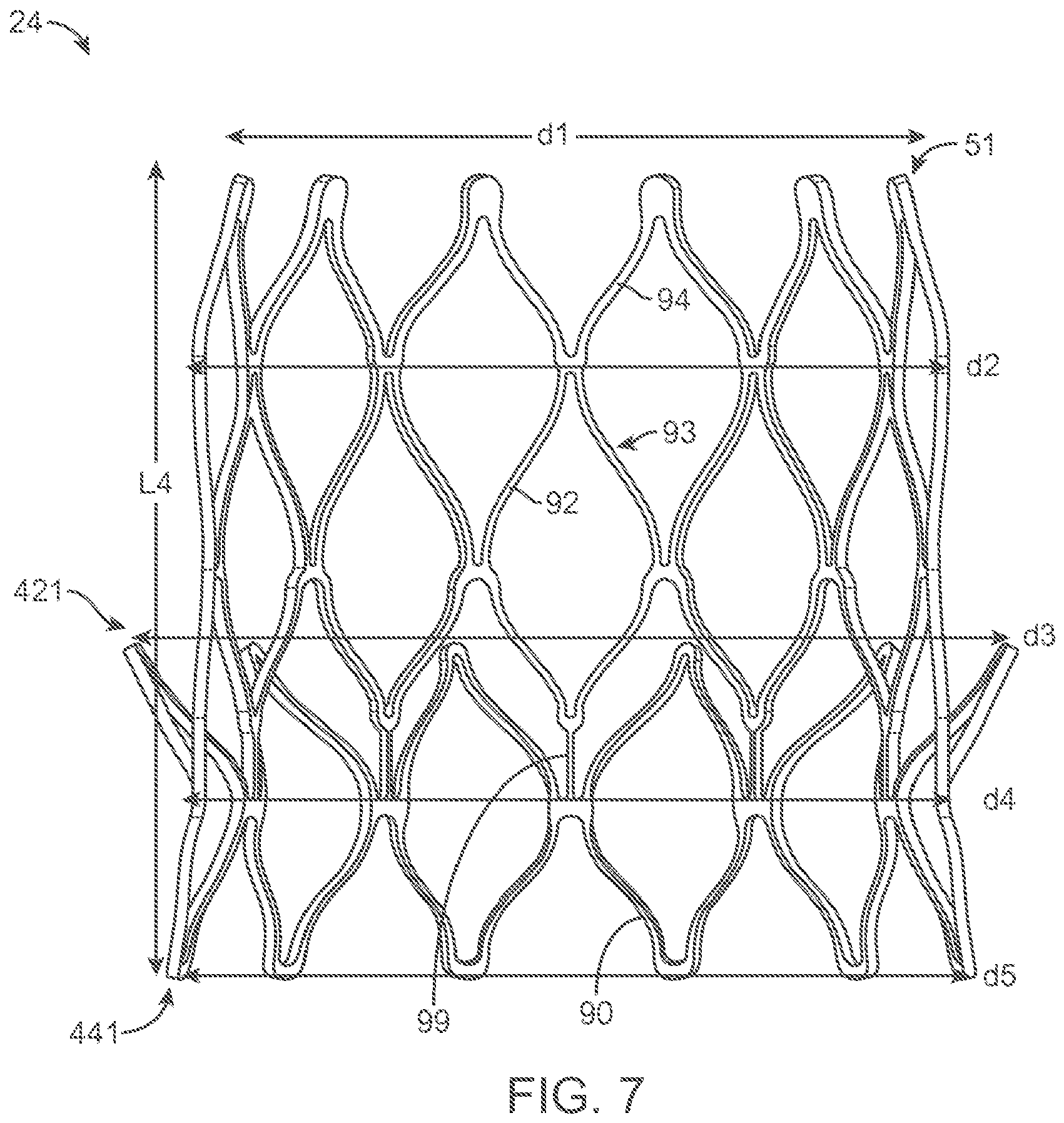 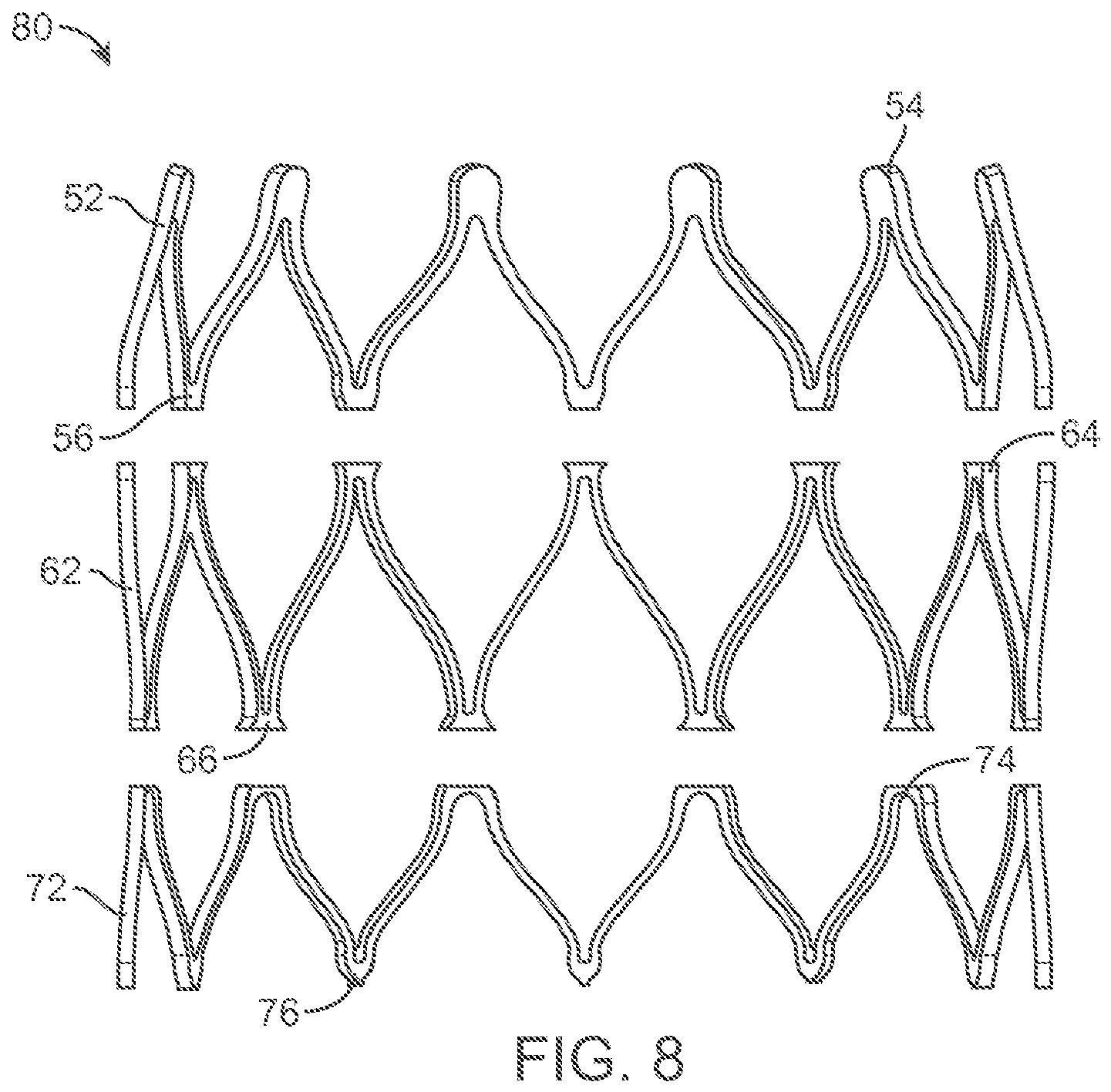 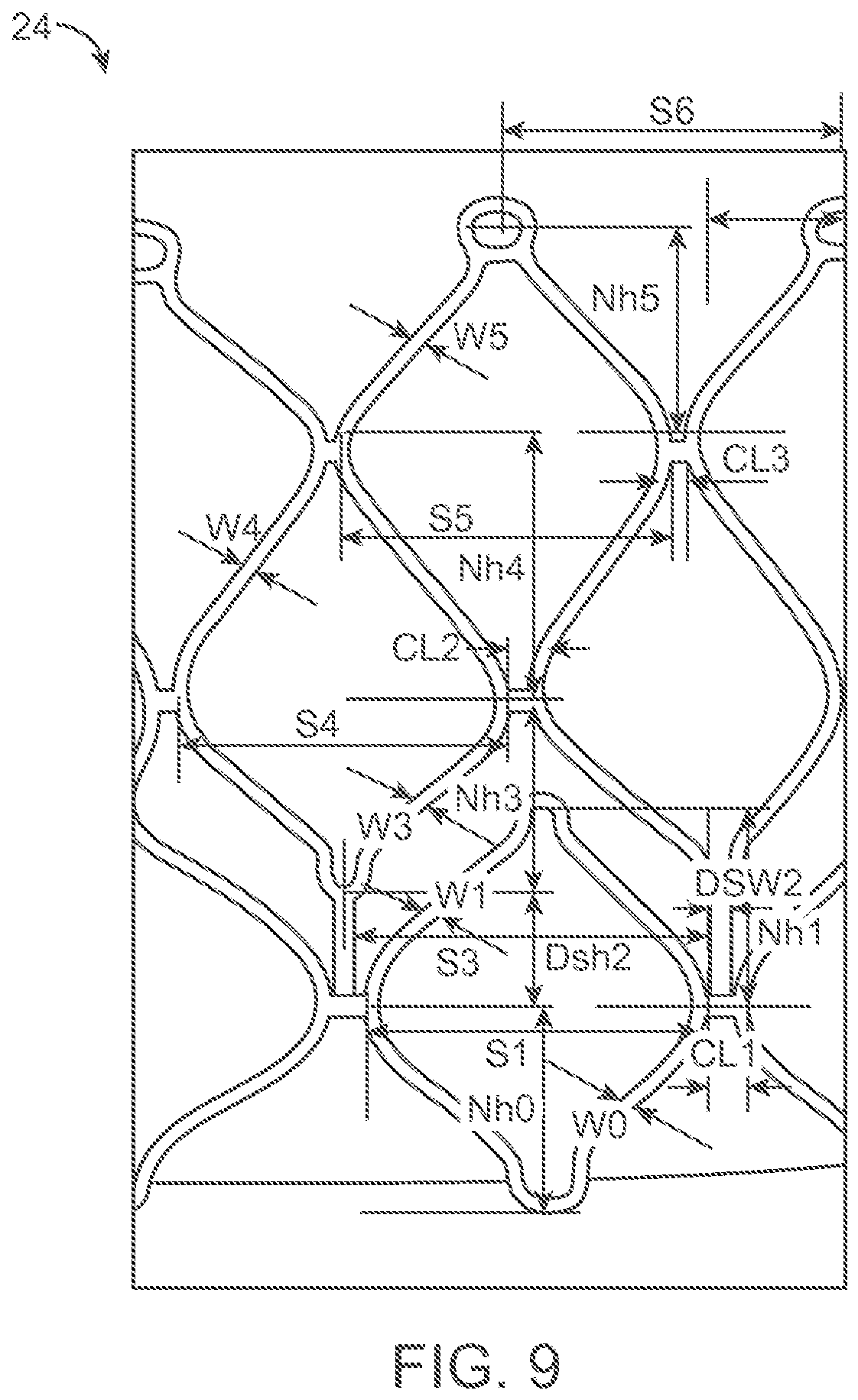 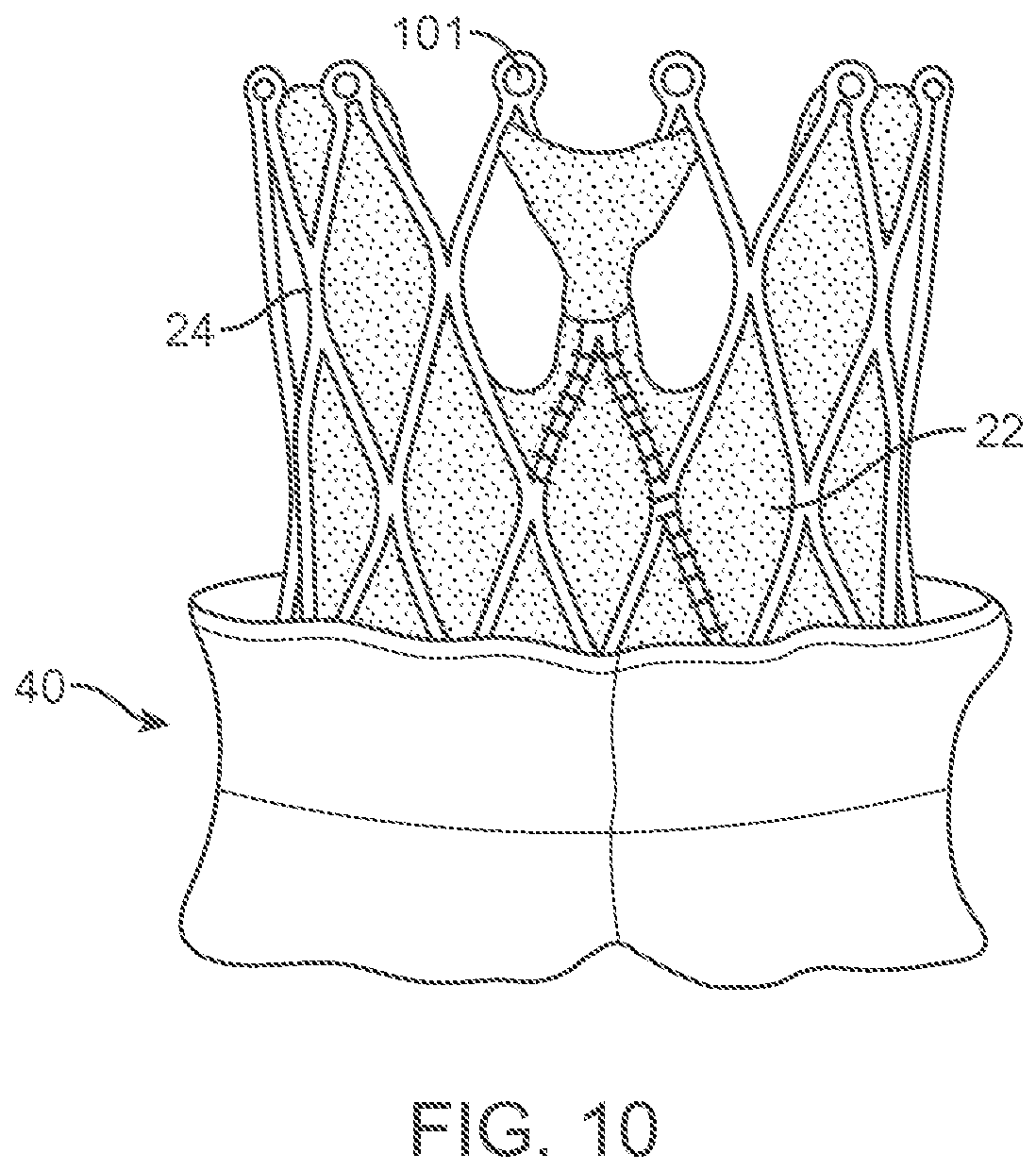 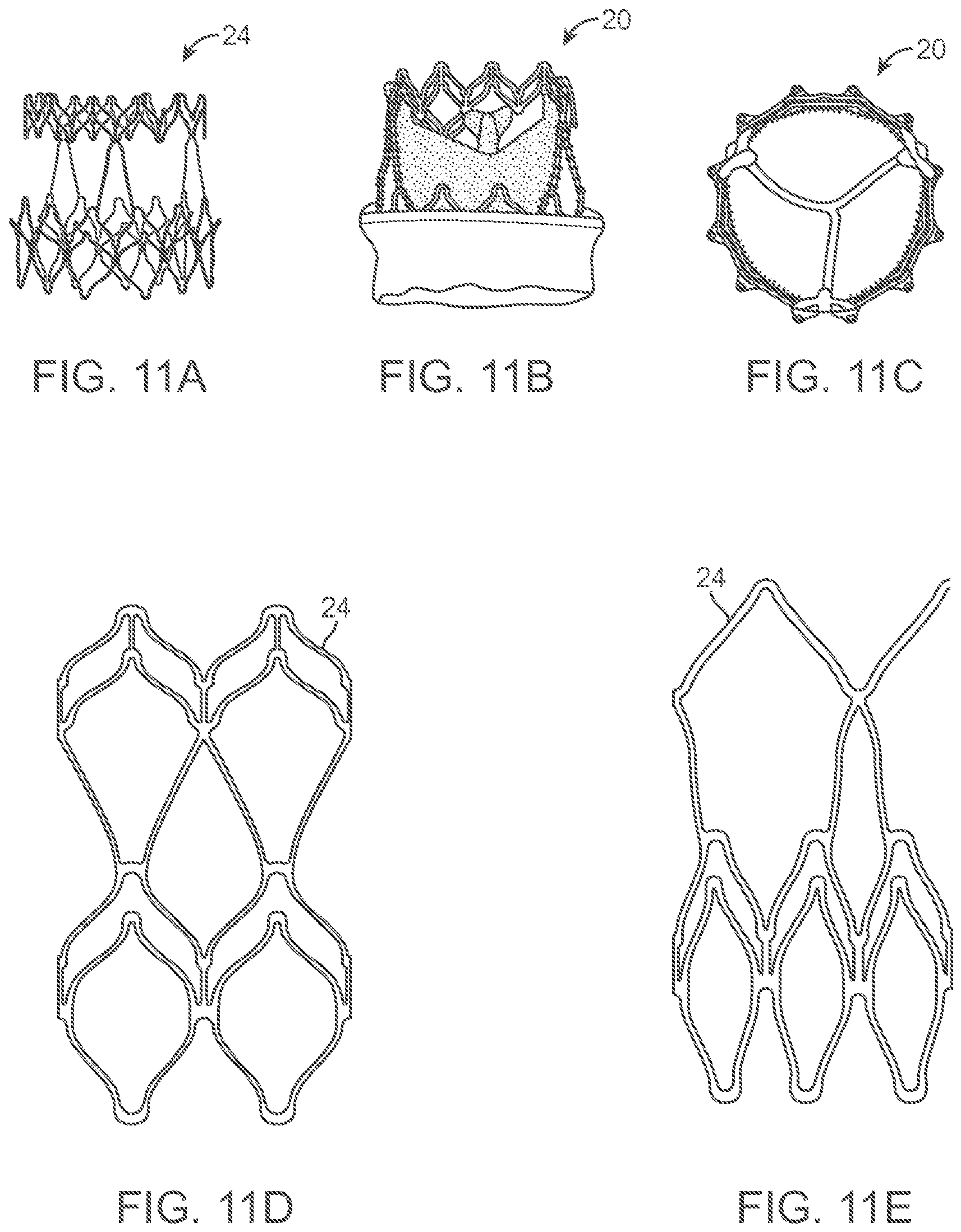 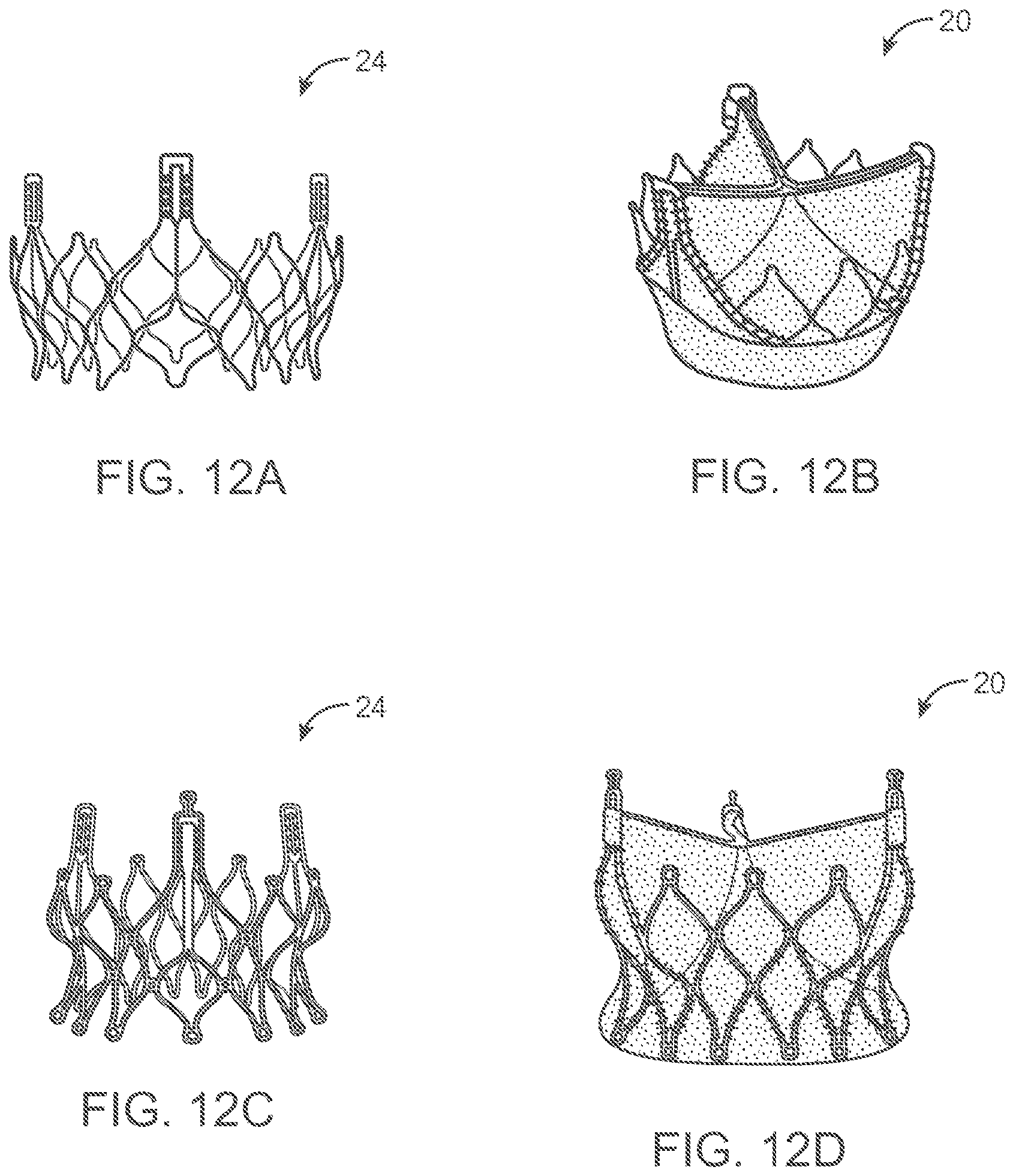 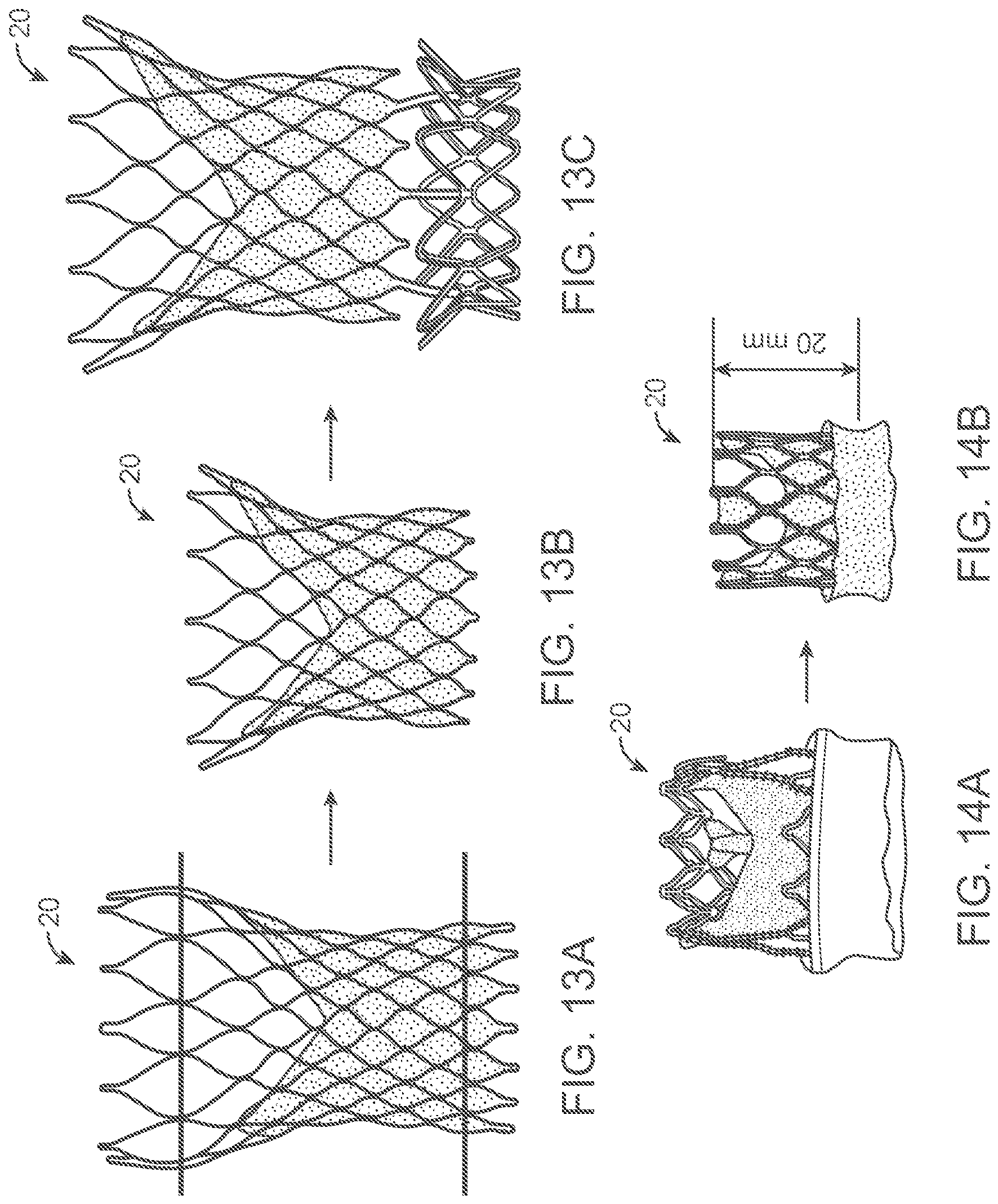 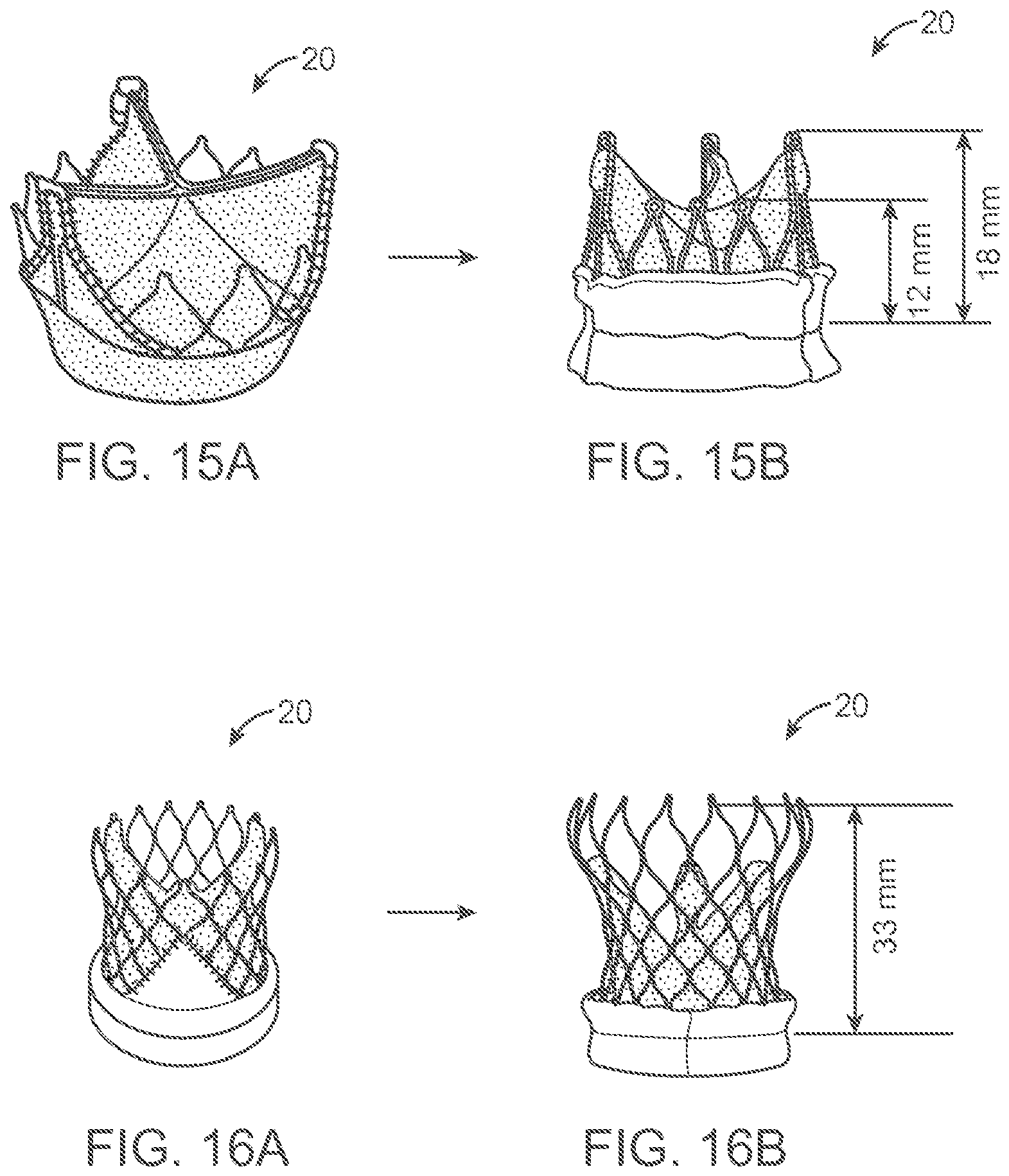 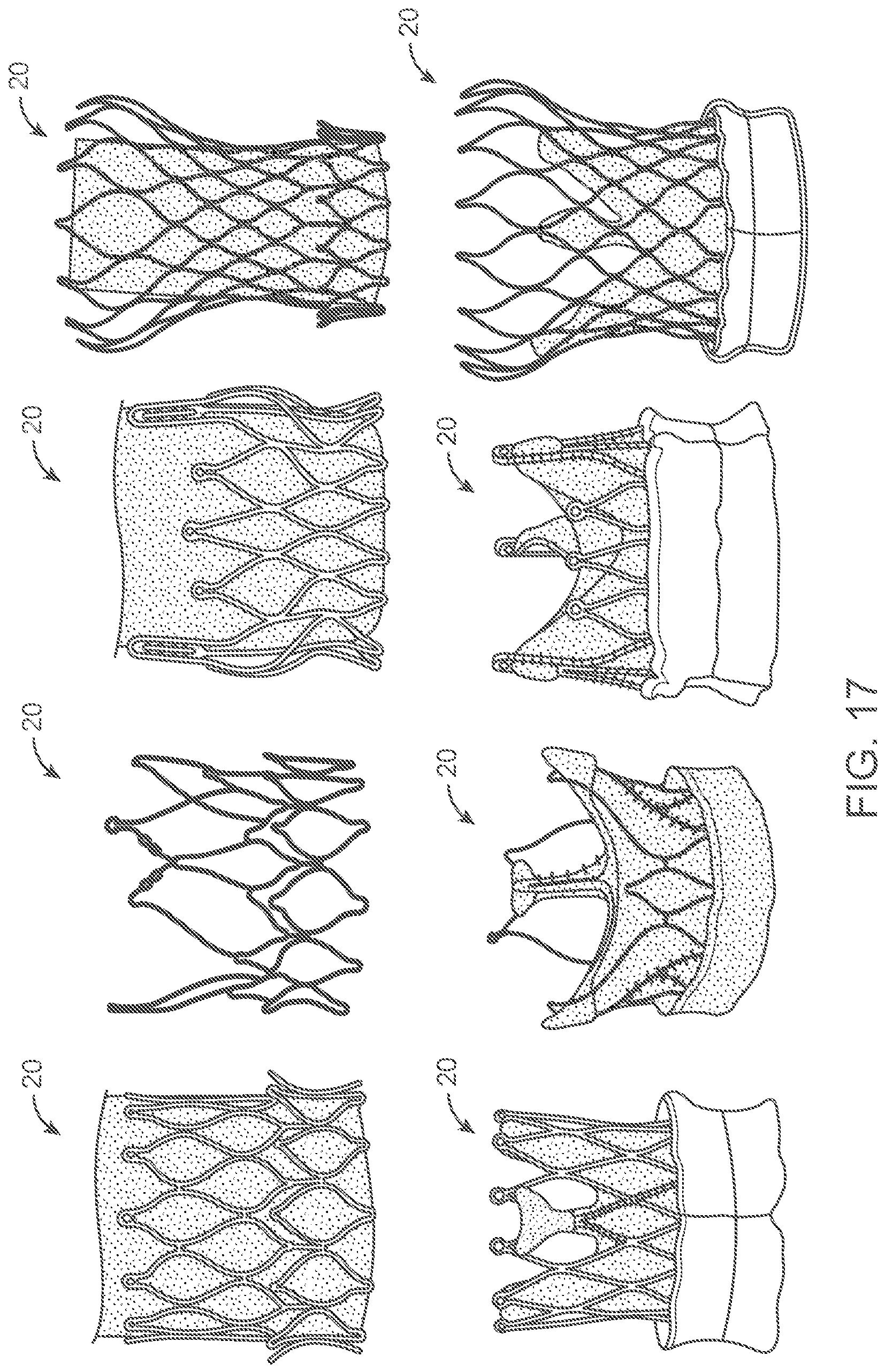 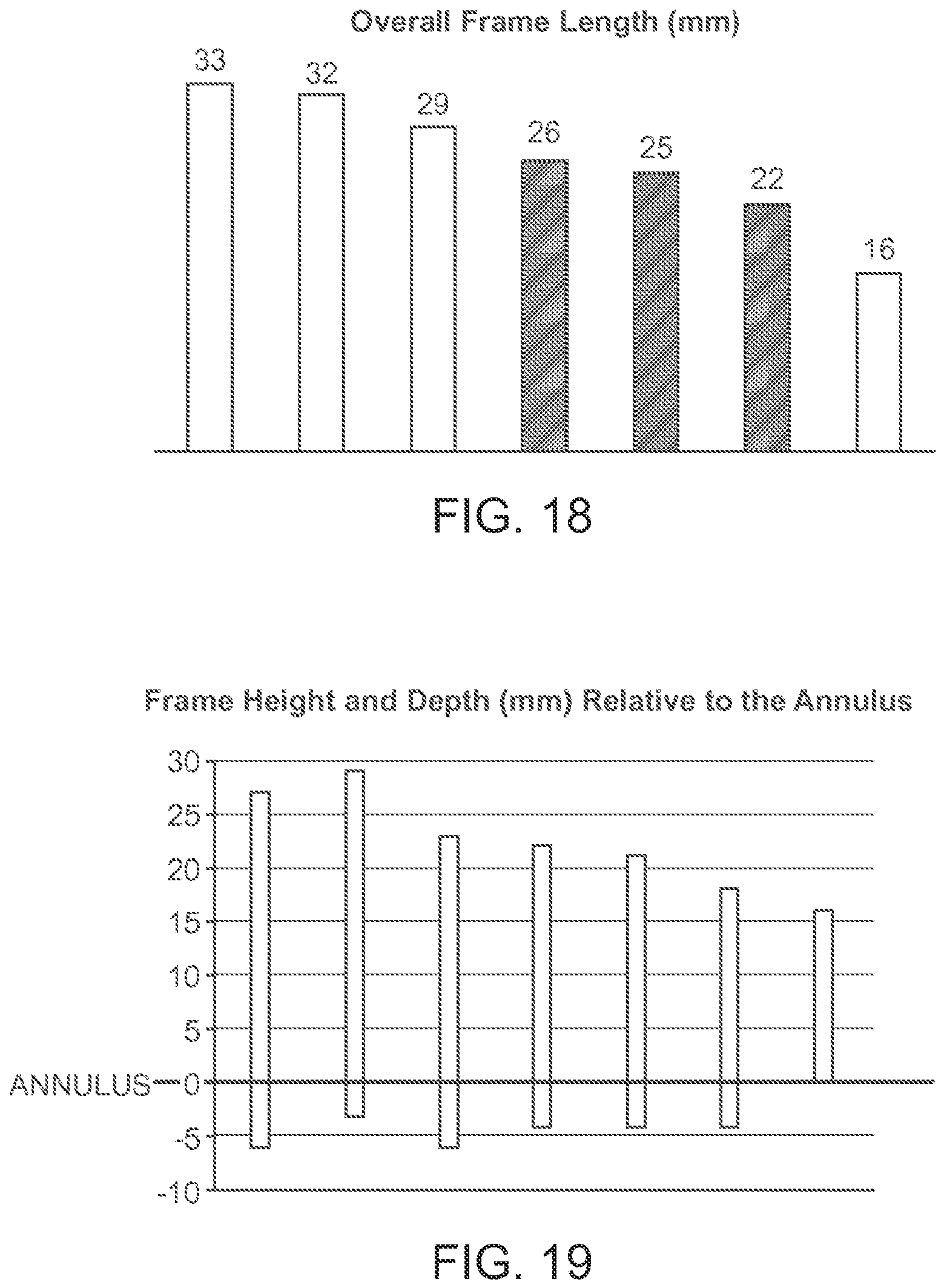 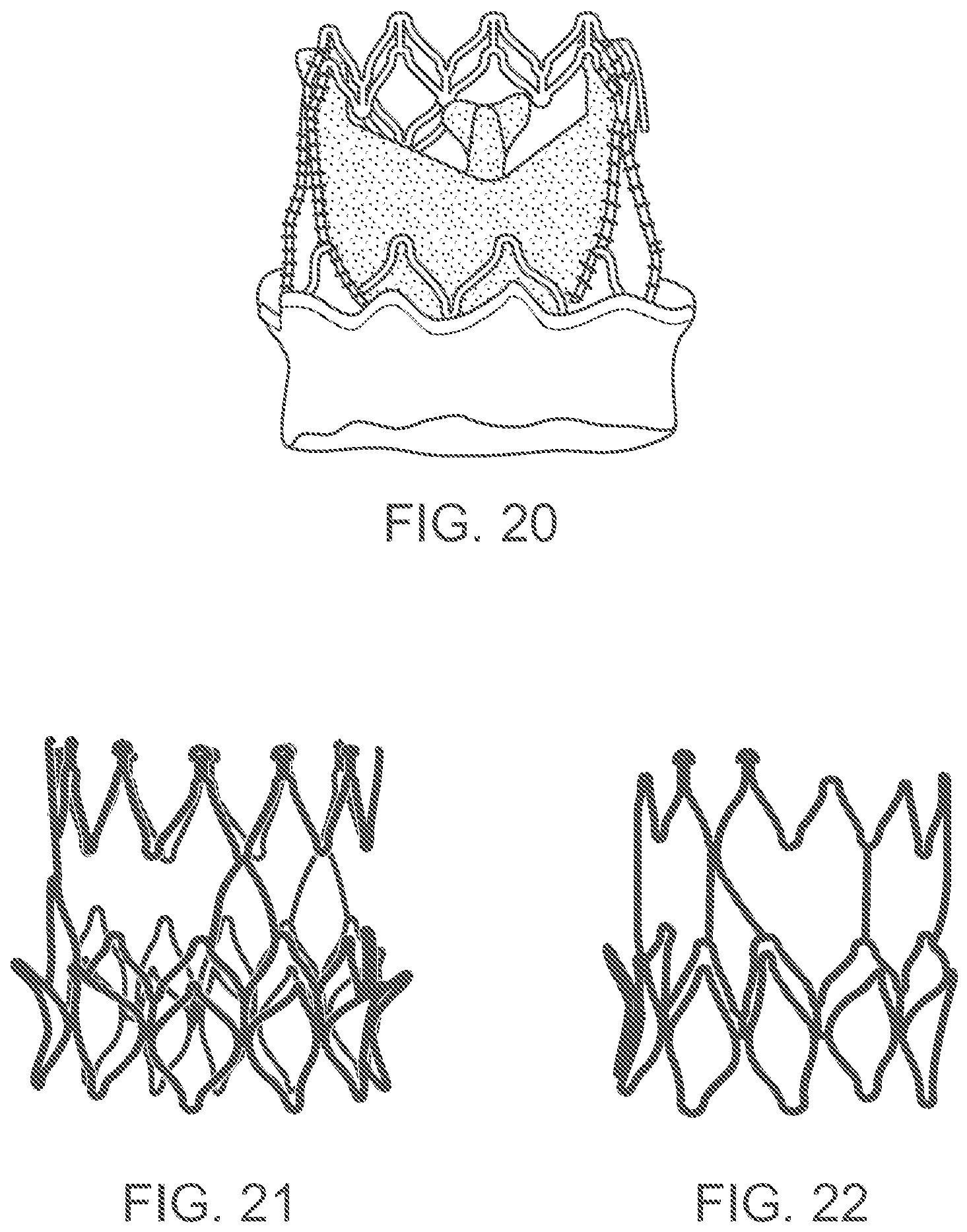 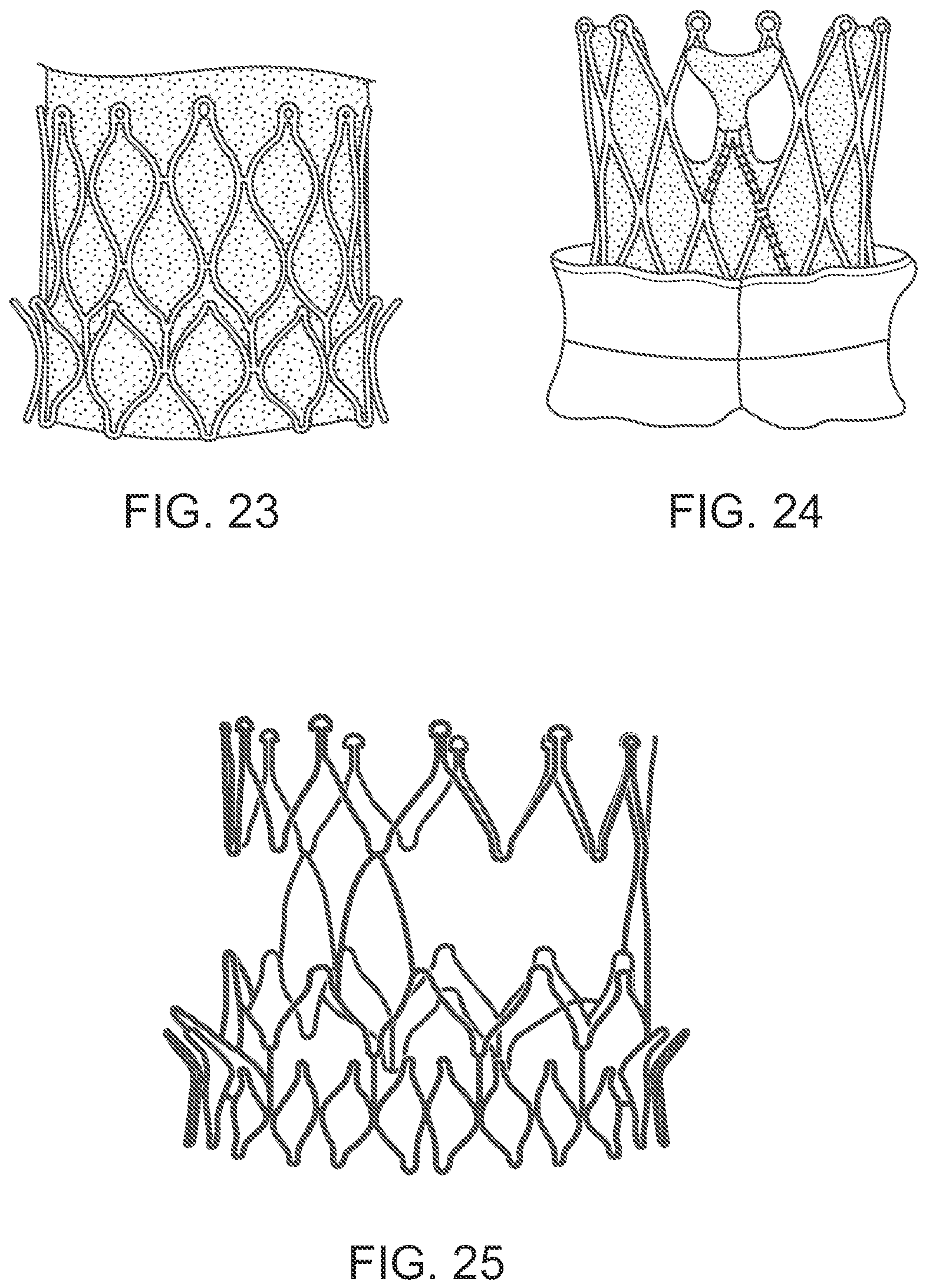 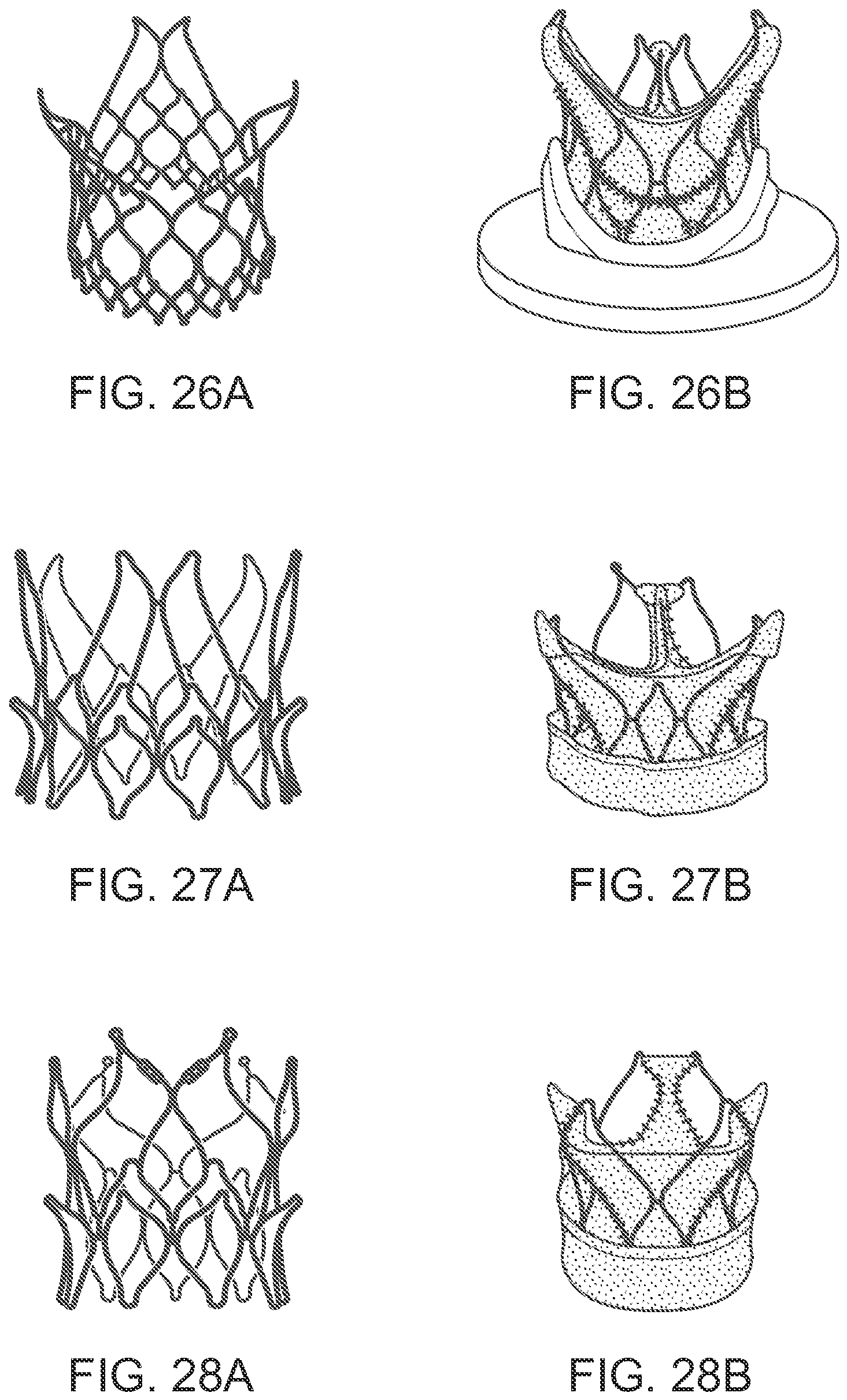 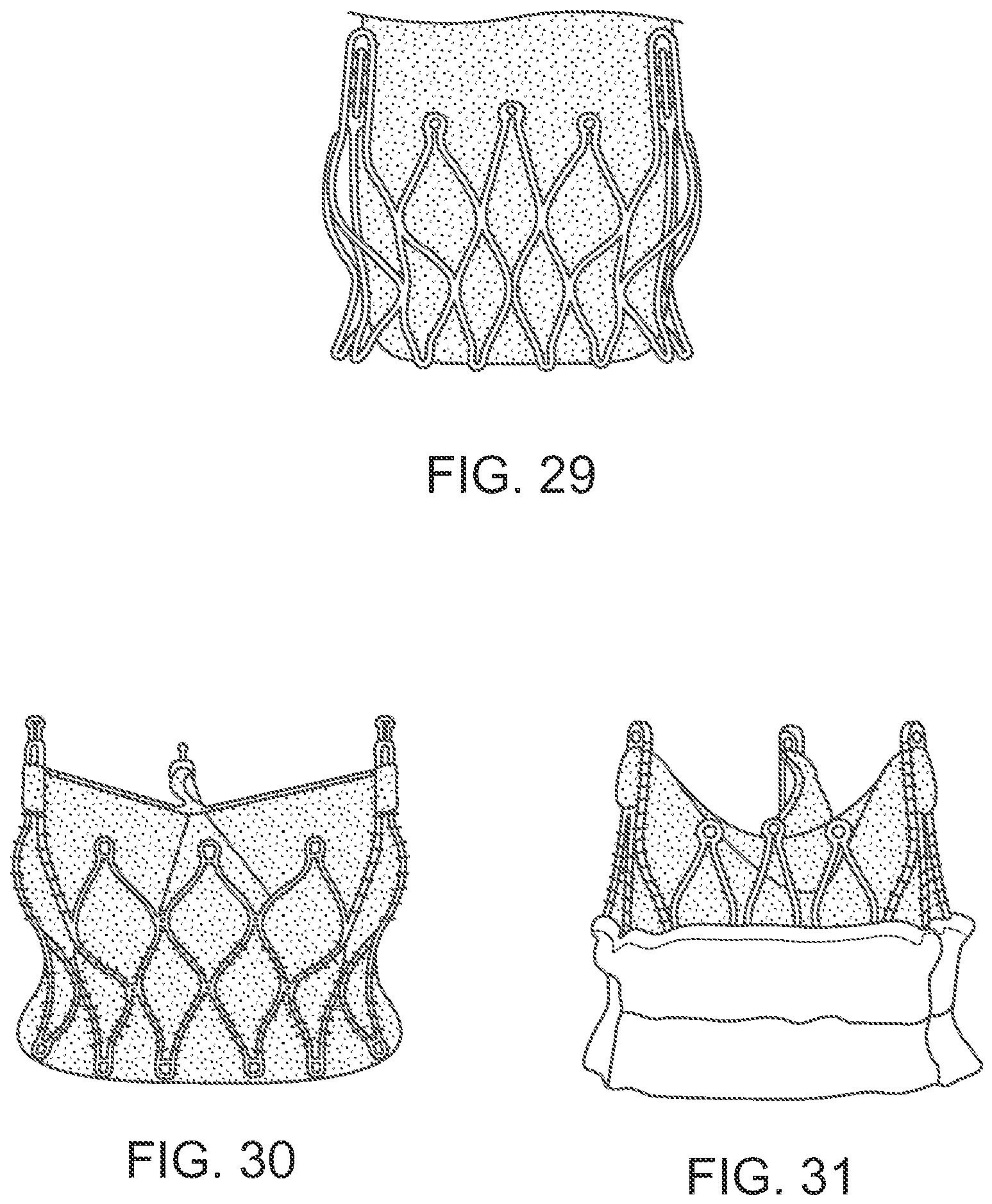 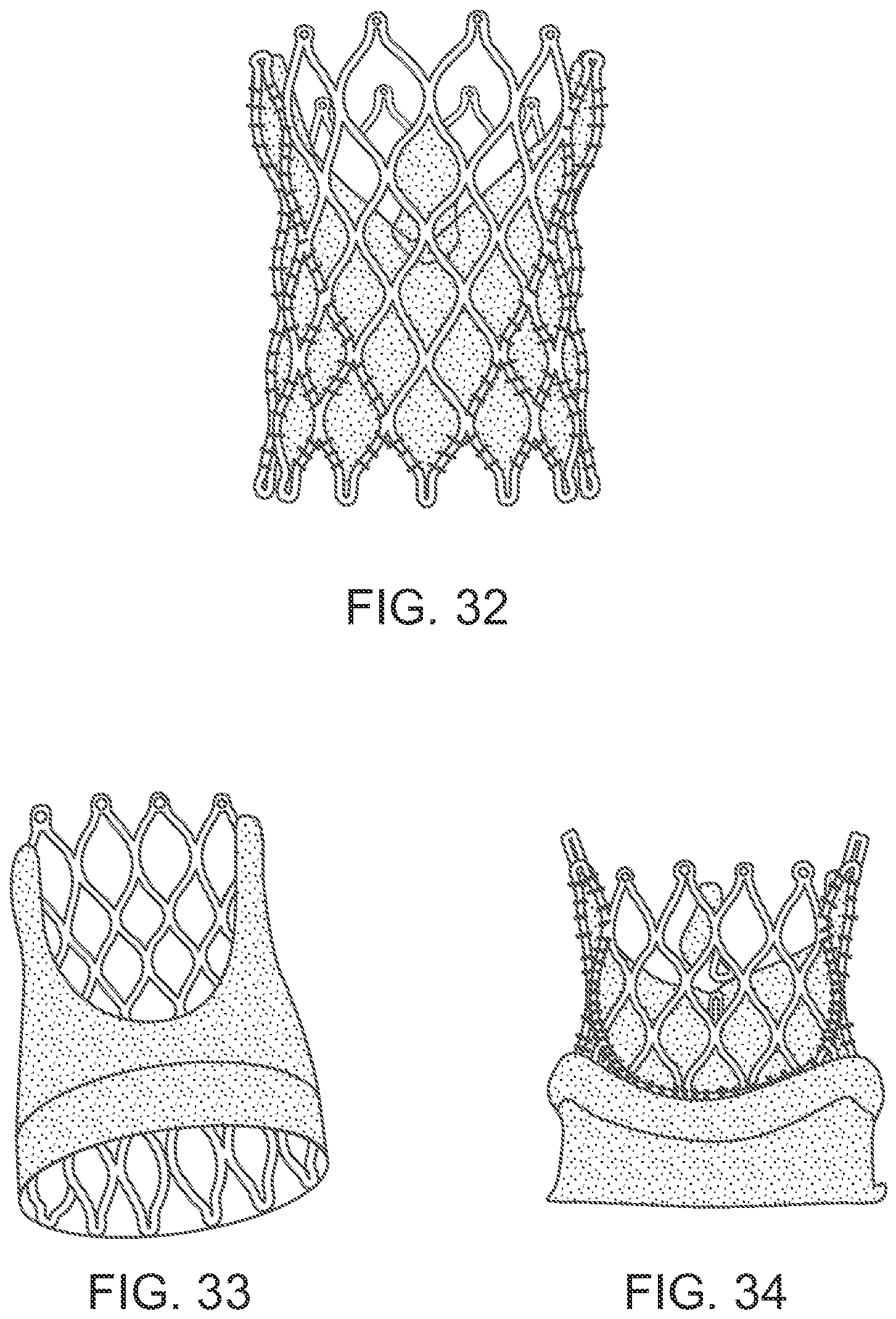