[0002] Growth of internet traffic, fueled by the growth in the number of users and by increasing numbers of applications, results in a higher demand for bandwidth. This growth entails larger packet networks with greater switching capabilities. Data centers contain huge numbers of racks of servers, racks of storage devices, and other racks, all of which are interconnected via a massive centralized packet switching resource. In data centers, electrical packet switches are used to route data packets. Electronic packet switching at very high rates involves massive cooling and space costs. Thus, photonic packet switching is desirable.
[0003] The racks of servers, storage, and input-output functions contain top of rack (TOR) switches which combine packet streams from their associated servers and/or other peripherals into a smaller number of high speed streams per TOR switch which are routed to the packet switching core. Also, TOR switches receive the returning switched streams from that resource and distribute them to servers within their rack. There may be 4 x 40 Gb/s streams from each TOR switch to the packet switching core, and the same number of return streams. There may be one TOR switch per rack, with hundreds to tens of thousands of racks, and hence hundreds to tens of thousands of TOR switches in a data center.
[0004] US 2006/165081 A1 discloses an apparatus, a method, and a system for contention resolution in data transfer in a crossbar switch. The method comprises sending data through a crossbar switch, routing deflected data to a deflection port, and sending the deflected data from the deflection port to the requested port

[0010] For a more complete understanding of the present invention, and the advantages thereof, reference is now made to the following descriptions taken in conjunction with the accompanying drawing, in which:

Figure 5 illustrates a resolution of contended packets by a photonic packet switch;

Figure 8 illustrates a flowchart of an embodiment method of resolving contending photonic packets;

Figure 10 illustrates a graph of throughput versus switch size;

Figure 14 illustrates a graph of the number of packets a switch buffers for each output as a function of interface load;

Figure 19 illustrates a flowchart for an embodiment method of resolving contending photonic packets;

Figures 21A-C illustrate waveforms and an eye diagram for a photonic packet switching system; and

[0011] Corresponding numerals and symbols in the different figures generally refer to corresponding parts unless otherwise indicated. The figures are drawn to clearly illustrate the relevant aspects of the embodiments and are not necessarily drawn to scale.

The throughput of the system T is given by the sum of all k probabilities that at least one packet is destined to output k divided by N, given by:

However, given the symmetry of the load and the assumption of uniformly distributed packets, the throughput is given by:

Figure 10 illustrates a graph of throughput 400 as a function of N. For large N, the throughput T converges to 1-1/e = 63%. Thus, 37% of the packets will be lost, because there is no buffer to absorb them. This means that adding 40% additional links may absorb these contended packets. In some examples, the number of output links is 1.35, 1.37, 1.4, 1.5, 1.67, 1.75 or 2 times the number of input links.
[0030] Figure 11 illustrates output load balancing optical packet switch 202 with one input link which handles λ traffic and N outputs which handle λ/N traffic each. In load balancing, traffic to all destinations is uniformly distributed.
[0031] Figure 12 illustrates input load balancing optical packet switch 214 with N inputs and one output. The N inputs each handle λ/N traffic, while the output handles λ traffic.
[0032] Figure 13 illustrates photonic switching system 410, which has more dilation and less dependency on load balancing than photonic switching system 180. There may be load balancing. Photonic switching fabric 414 contains N input ports and 2N output ports. Input TOR switches 412 are coupled to photonic switching fabric 414.
[0033] The buffering requirement may be calculated when there is a uniform distribution of load across all outputs. There may be a maximum number of packets sent to the contention links. A calculation for the buffer requirement may use the Poisson distribution. Although this distribution may underestimate the buffer size for data networks, even this underestimated buffer size is problematic in photonic switches. Assuming that the switch has K containers for each output where each container can store a packet, when the number of packets arriving during transmission of a packet exceeds buffer size K, the additional packets will be lost or blocked. The blocking probability can be obtained using M/M/1/K system. In this system, the first M represents the Poisson distribution of arrival of a packet or wrap, and the second M represents transmission time (or service time) of a packet or wrap to the output port, 1 represent the number of switch links to the output destination, and K represents the number of packets or wraps that can be held for each output port. The blocking probability as a function of traffic loading of each link, p, with:

where λ is packet arrival rate and µ is the service rate, is given by:

K can be expressed in terms of ρ and PK as:

a first photonic switch; and

Example 4. The photonic switching fabric of Example 1, wherein the second plurality of output ports is at least 1.35 times the first plurality of input ports.

Example 5. The photonic switching fabric of Example 4, wherein the second plurality of output ports is at least twice the first plurality of input ports.

Example 6. The photonic switching fabric of Example 1, wherein the plurality of TOR switches is configured in a ring.

Example 9. The photonic switching fabric of Example 7, wherein the second switch is an electrical switch.

[0072] While several embodiments have been provided in the present disclosure, it should be understood that the disclosed systems and methods might be embodied in many other specific forms without departing from the scope of the present disclosure. The present examples are to be considered as illustrative and not restrictive, and the intention is not to be limited to the details given herein. For example, the various elements or components may be combined or integrated in another system or certain features may be omitted, or not implemented.
[0073] In addition, techniques, systems, subsystems, and methods described and illustrated in the various embodiments as discrete or separate may be combined or integrated with other systems, modules, techniques, or methods without departing from the scope of the present disclosure. Other items shown or discussed as coupled or directly coupled or communicating with each other may be indirectly coupled or communicating through some interface, device, or intermediate component whether electrically, mechanically, or otherwise. Other examples of changes, substitutions, and alterations are ascertainable by one skilled in the art and could be made without departing from the scope disclosed herein.

1. A method of photonic packet switching, the method characterized by comprising:

determining (254, 466) whether the first output port is available during the first period of time;

receiving (474), by the photonic switching fabric from the first TOR switch, the first photonic packet;

4. The method of claim 1, wherein routing the first photonic packet to the alternative output port comprises:

routing the first packet to an alternative packet switch; and

switching the first packet by the alternative packet switch.

a photonic packet switch (222) configured to operate in accordance with a method in any one of claims 1 to 5; and 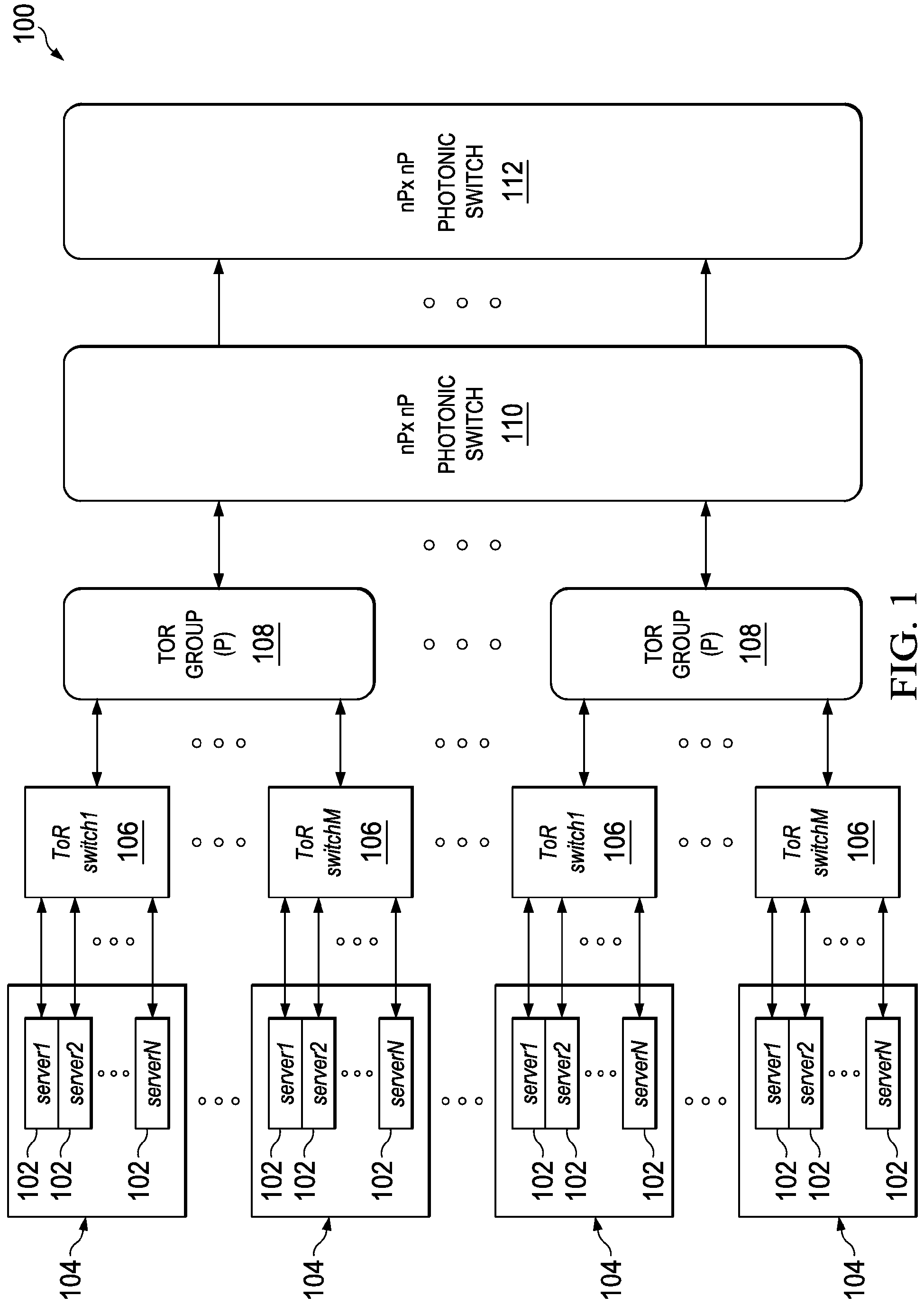 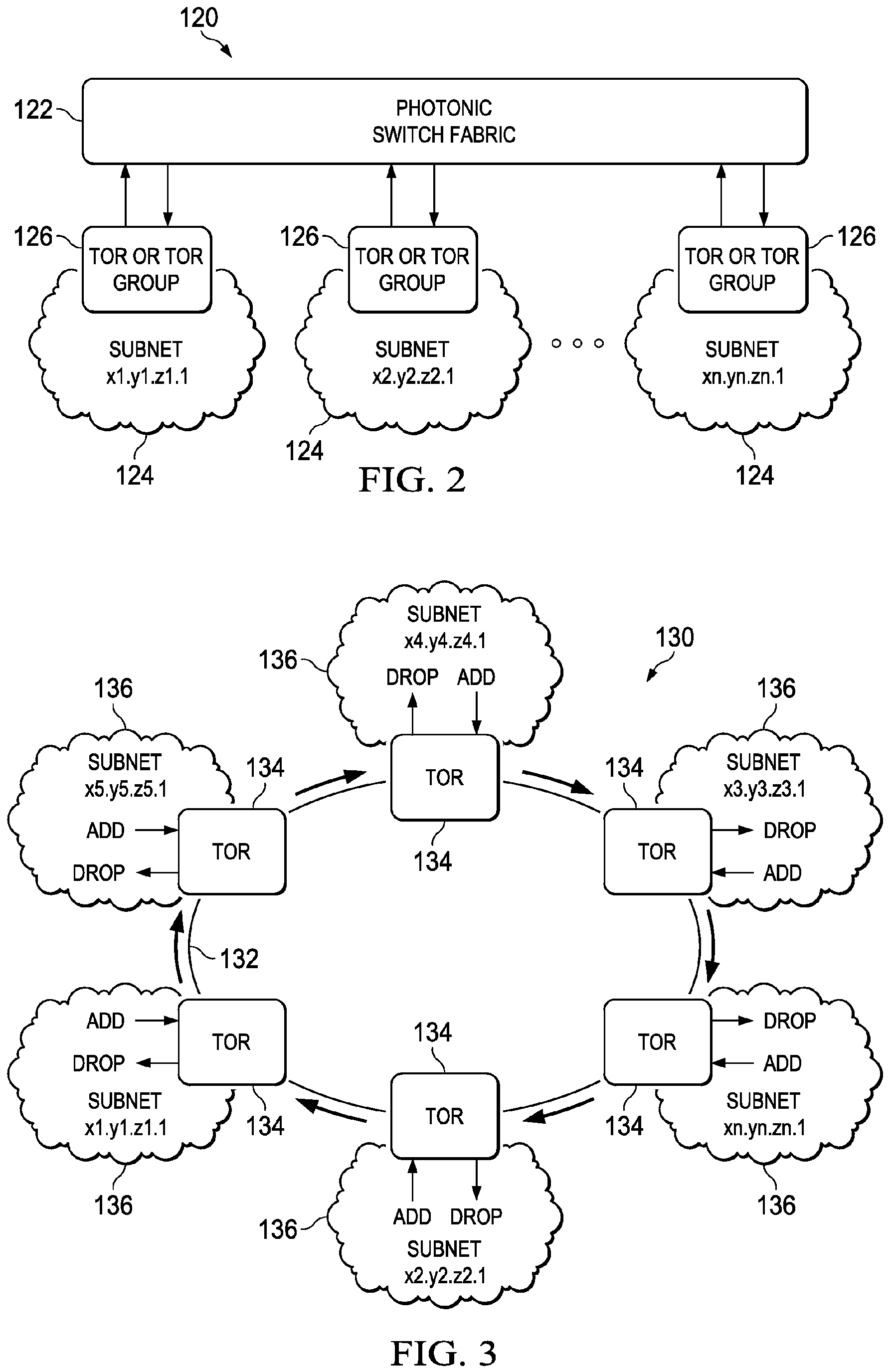 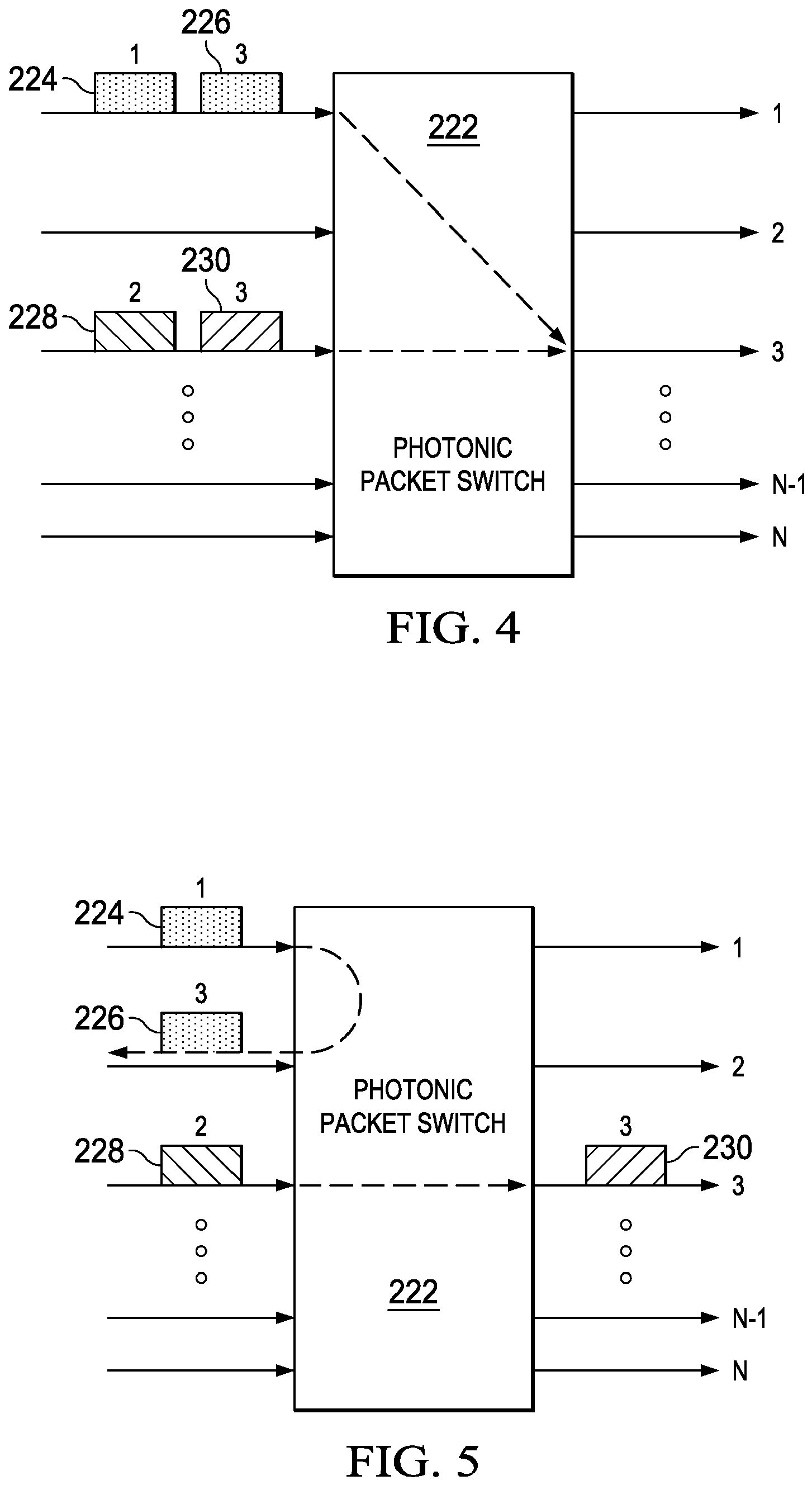 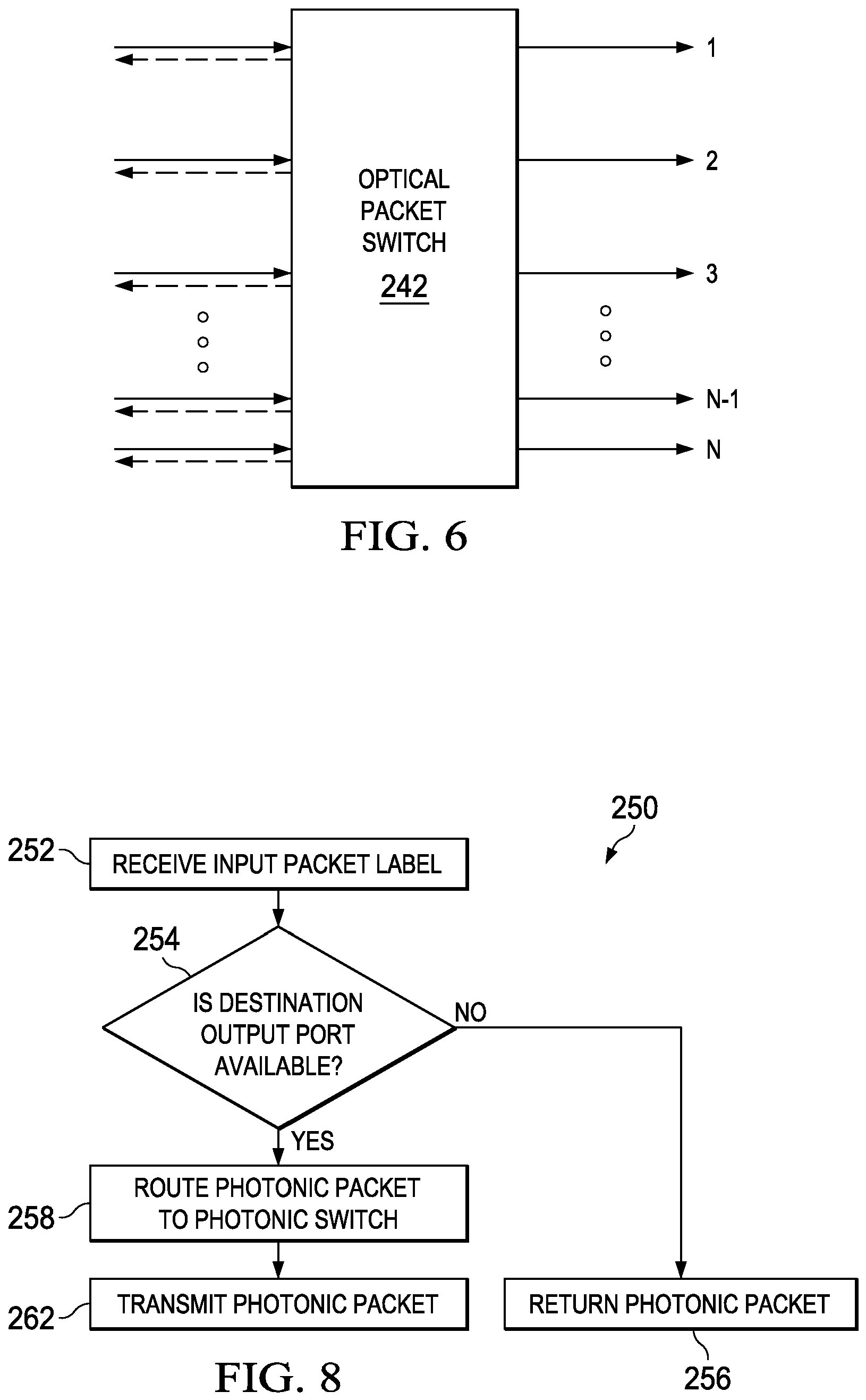 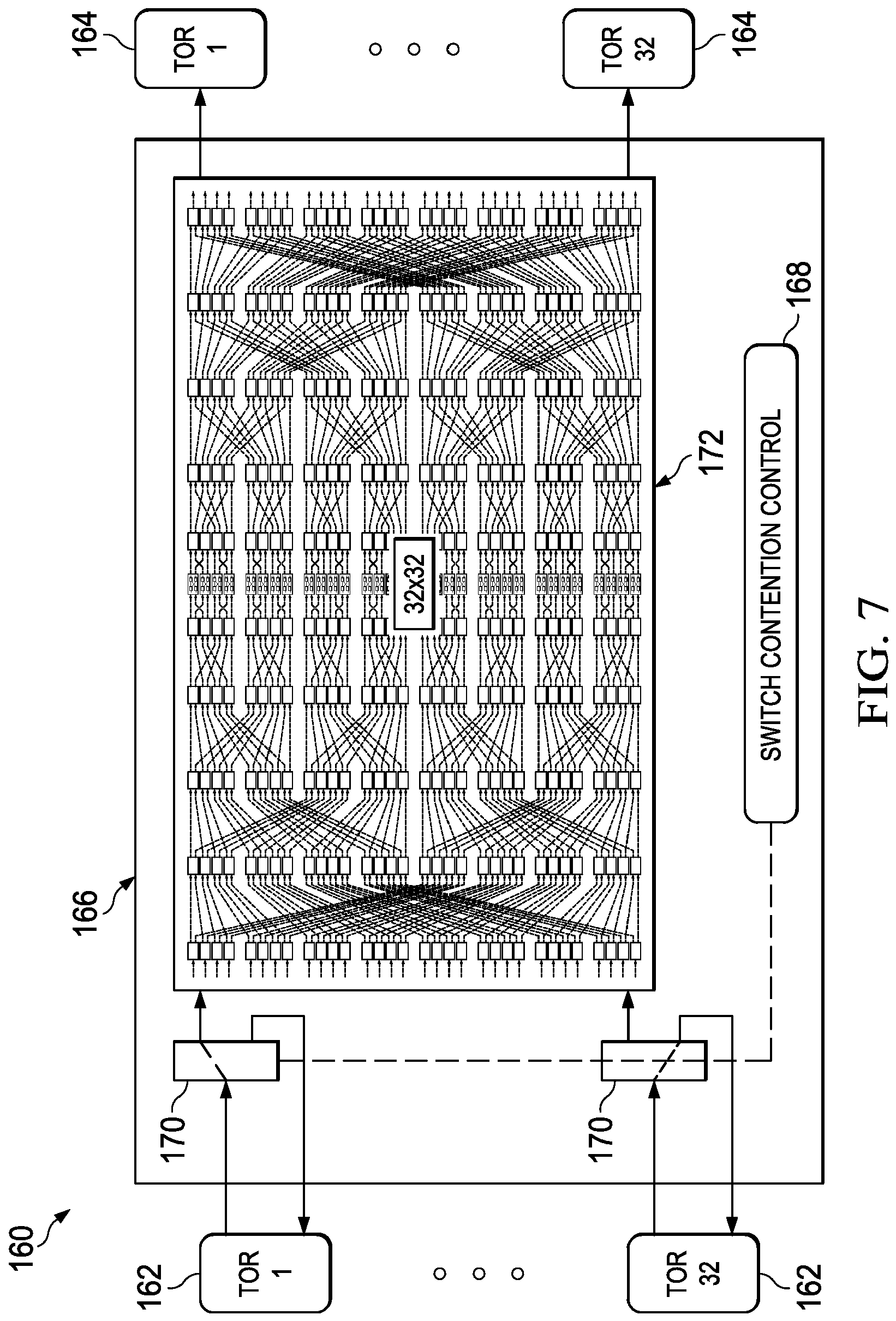 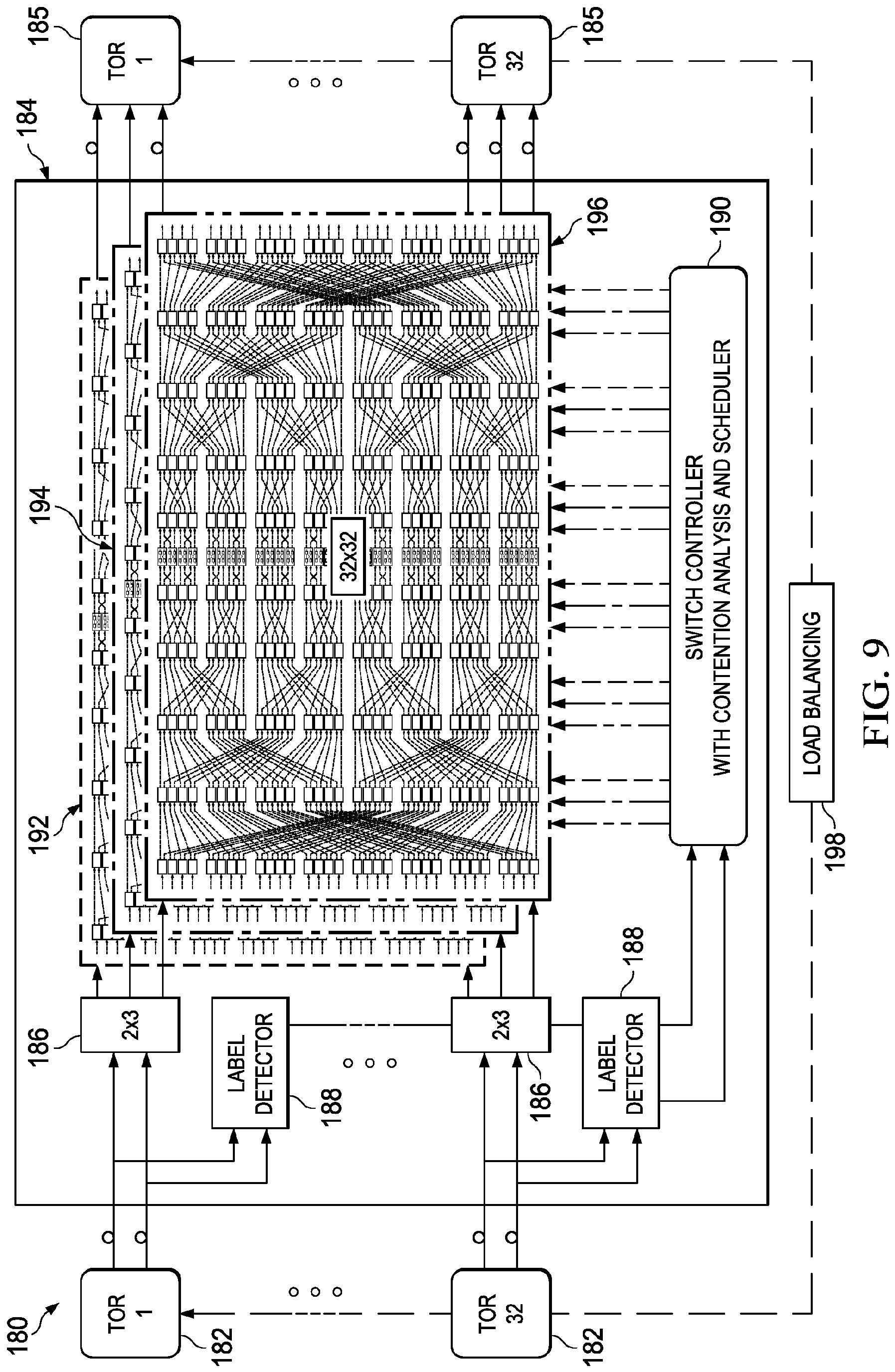 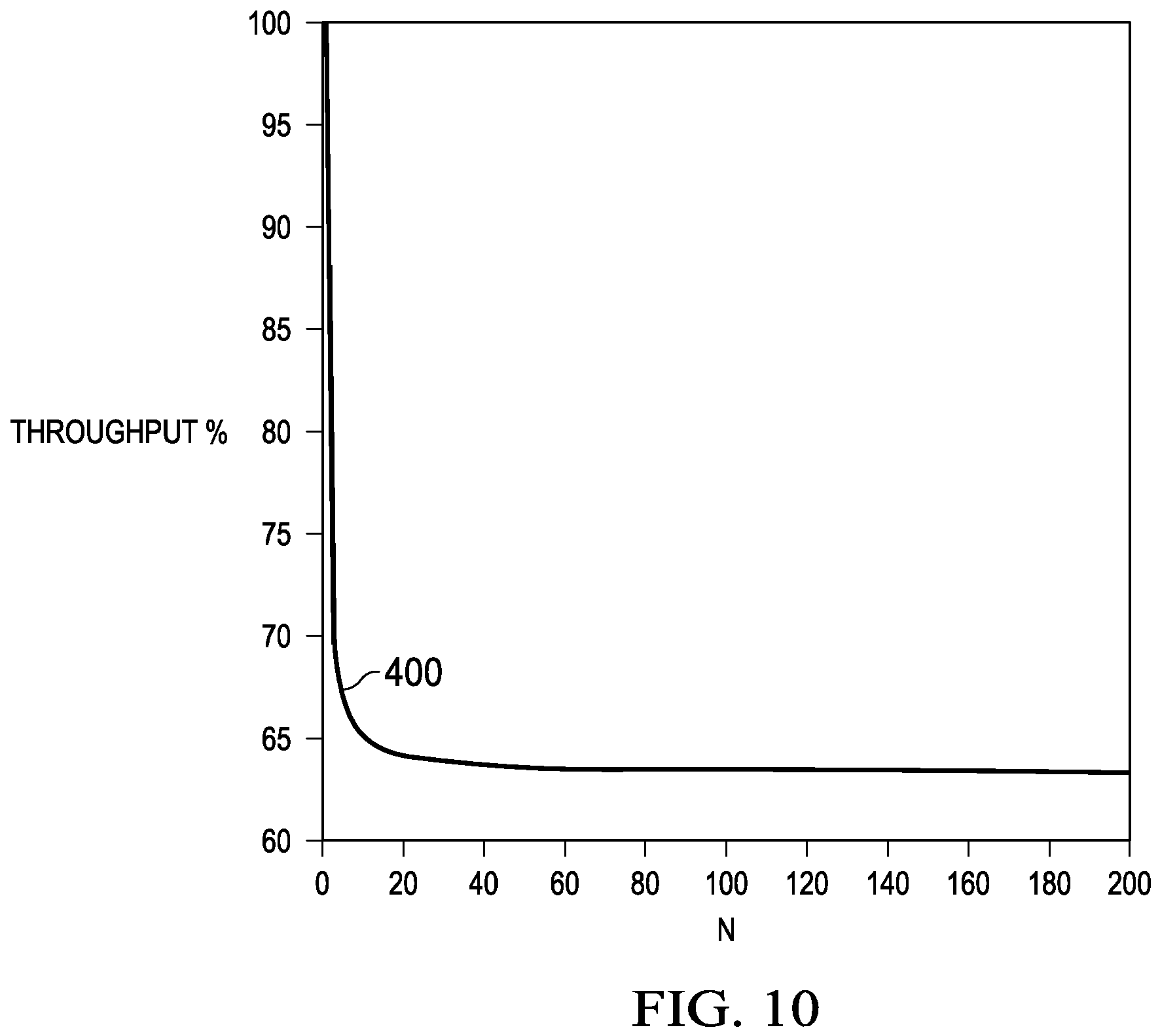 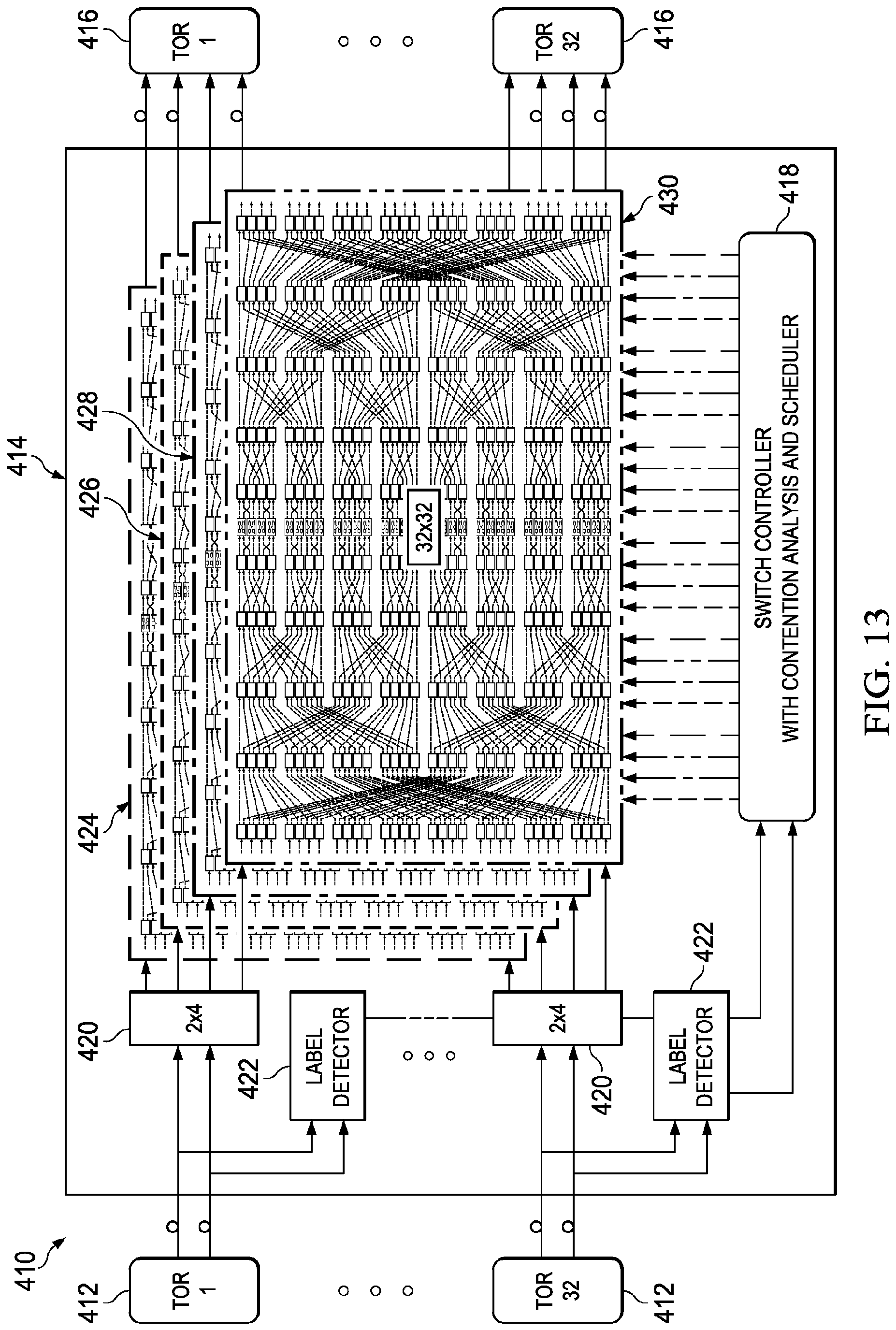 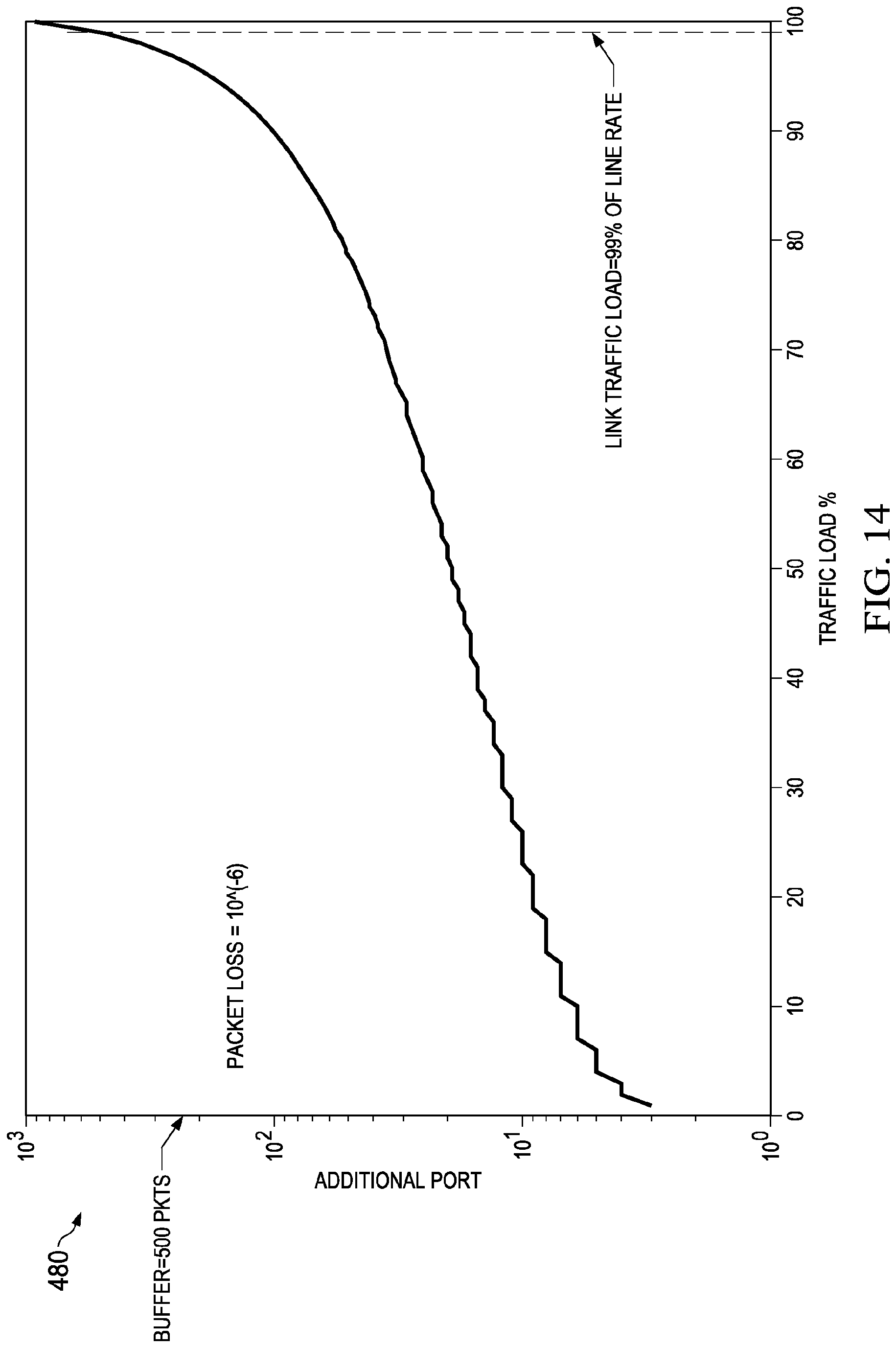 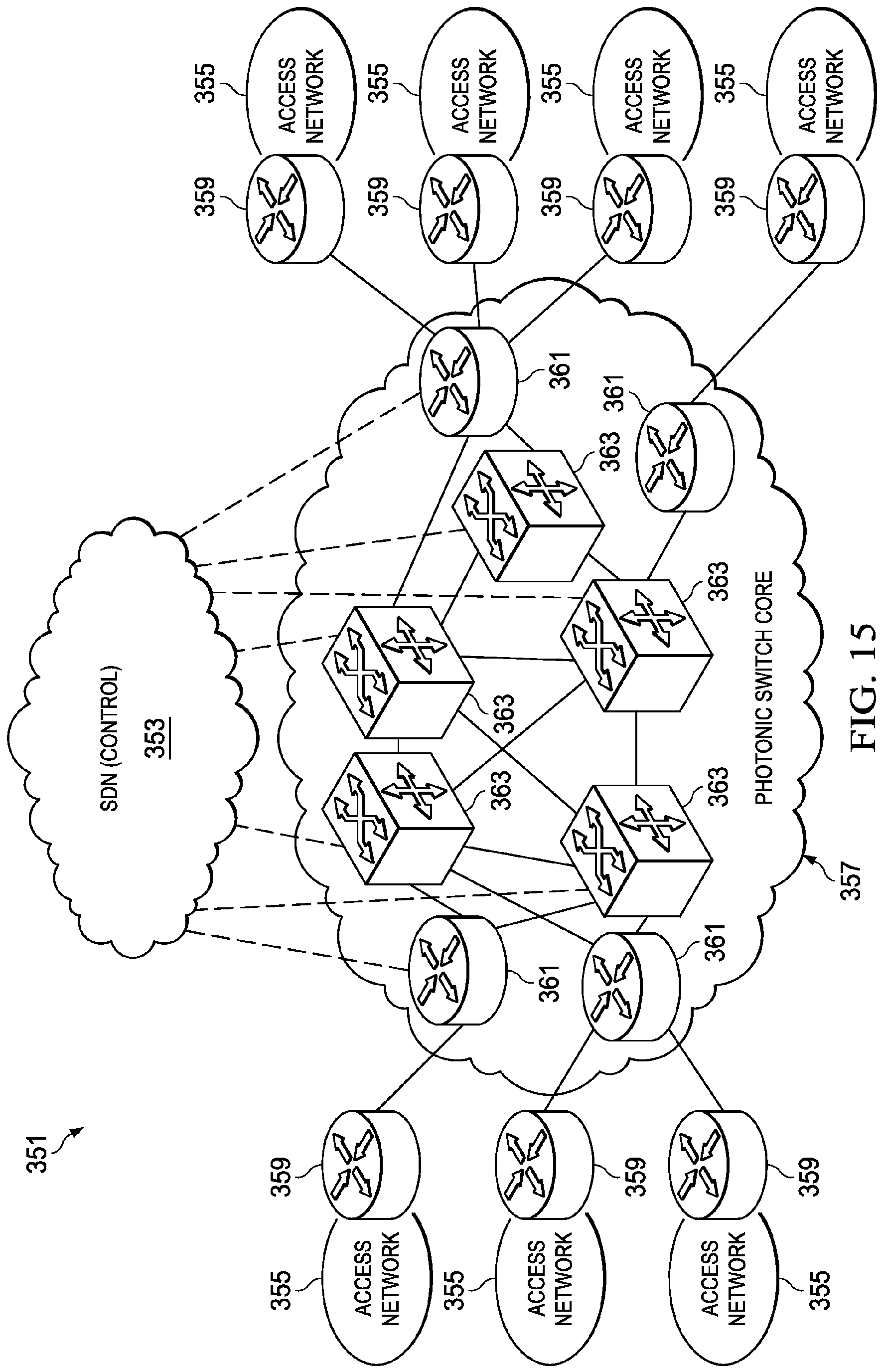 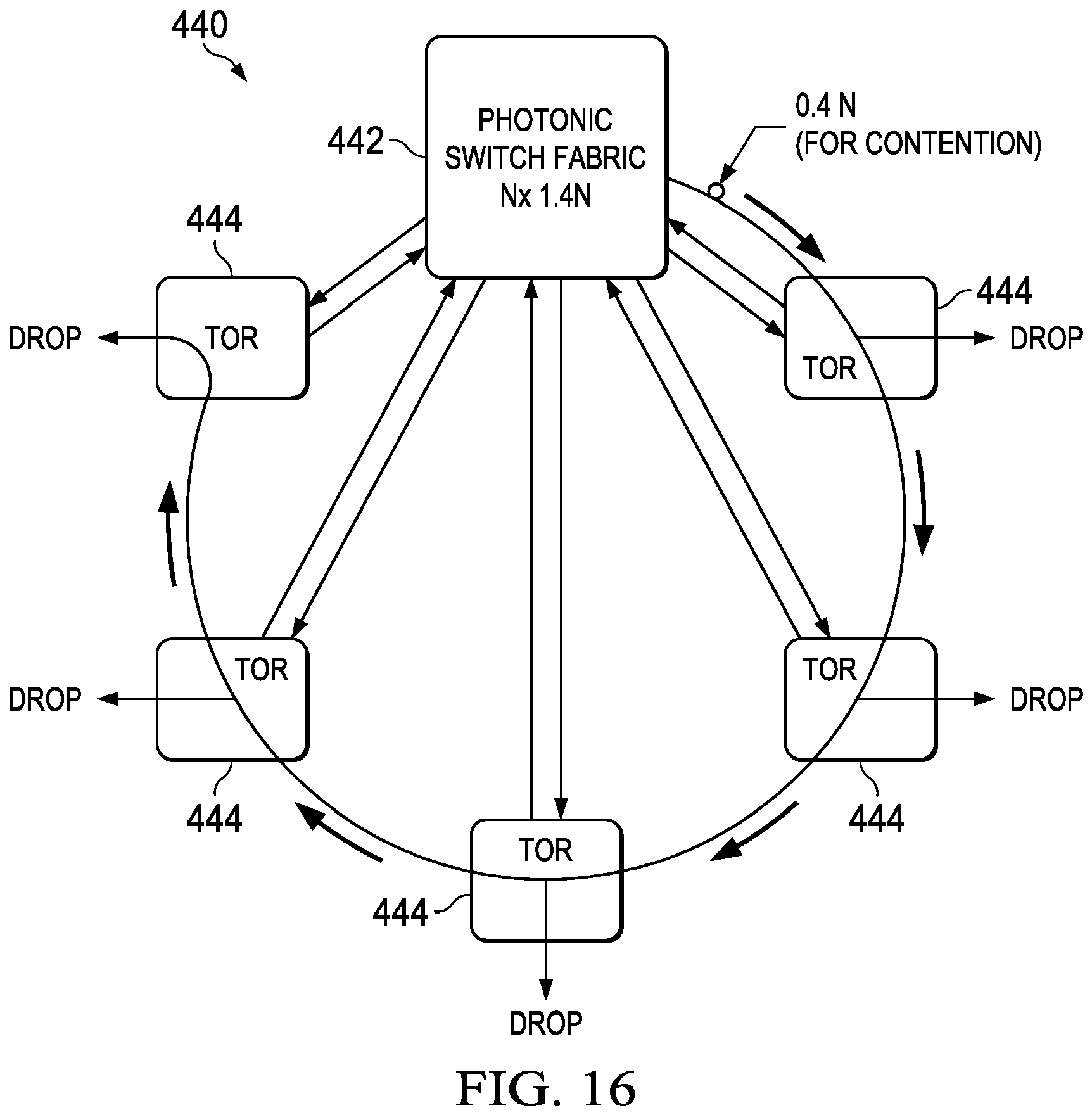 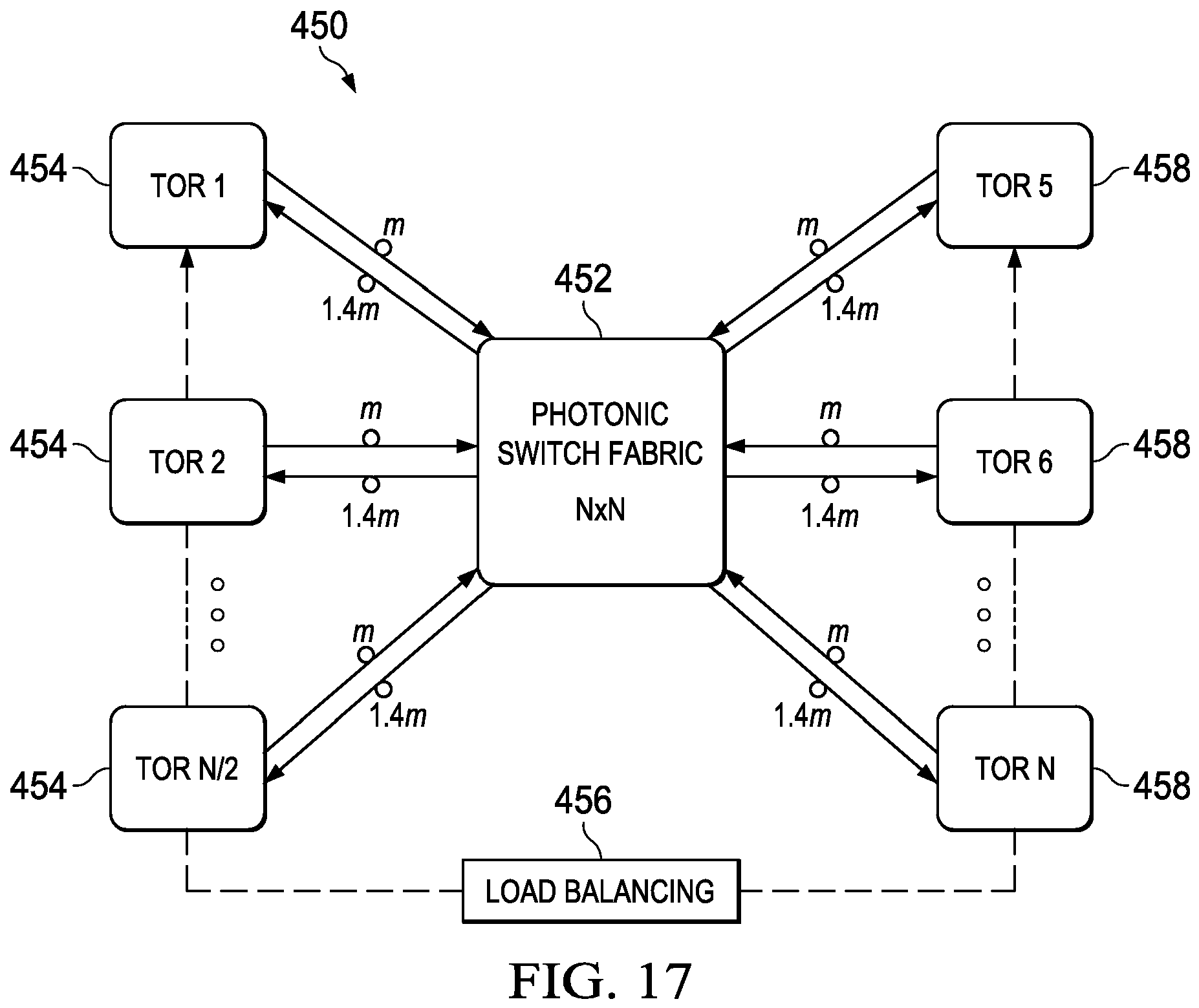 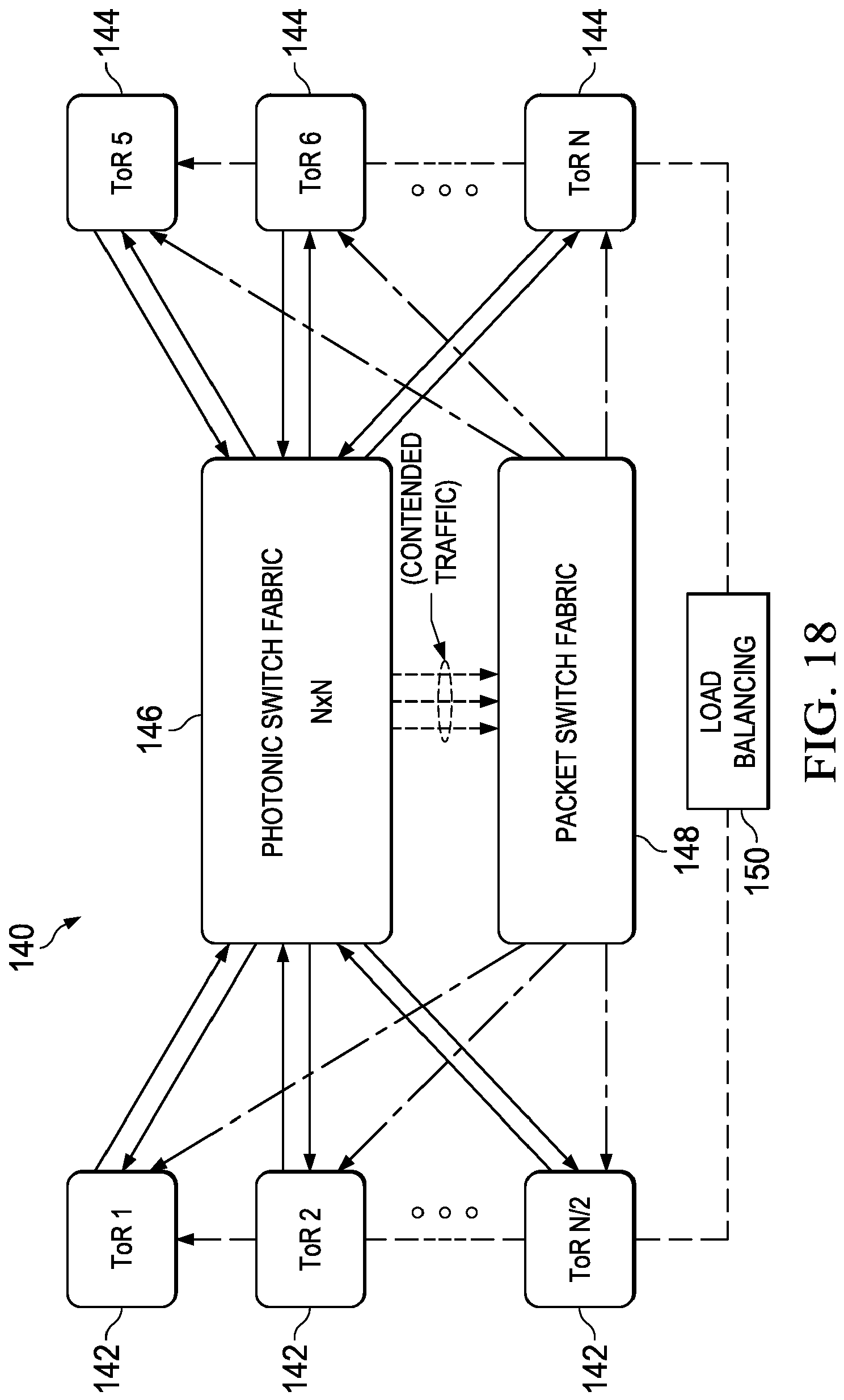 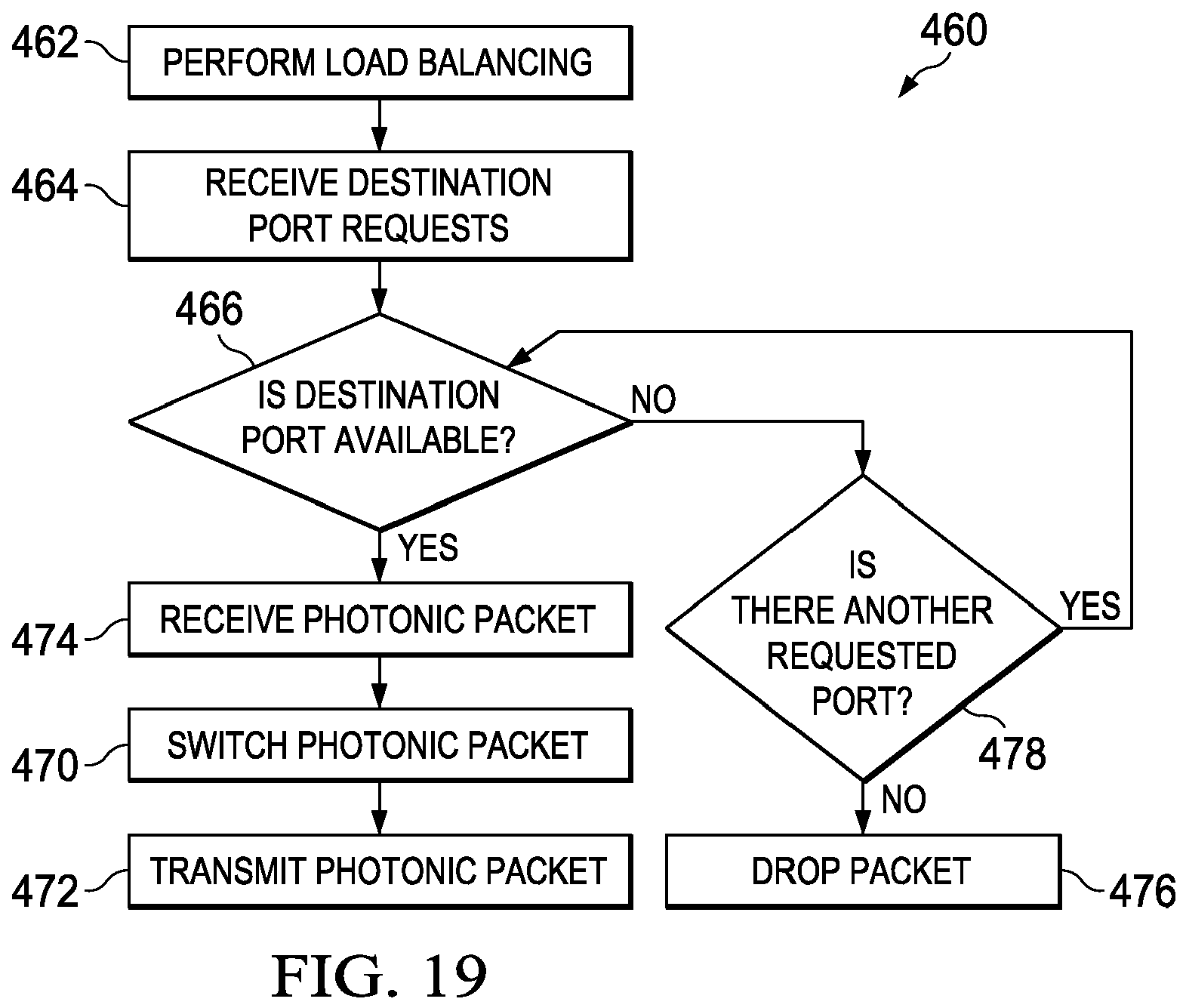 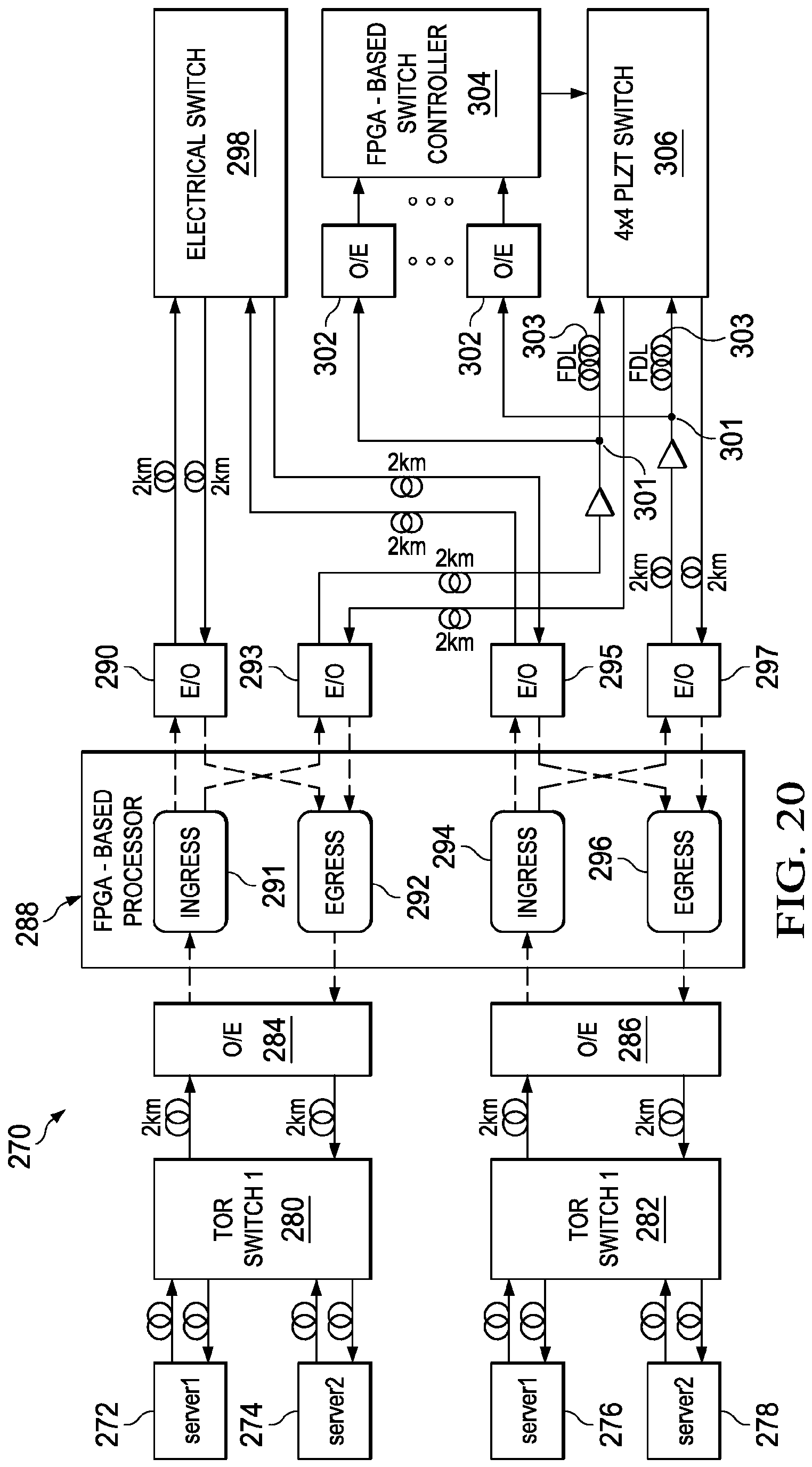 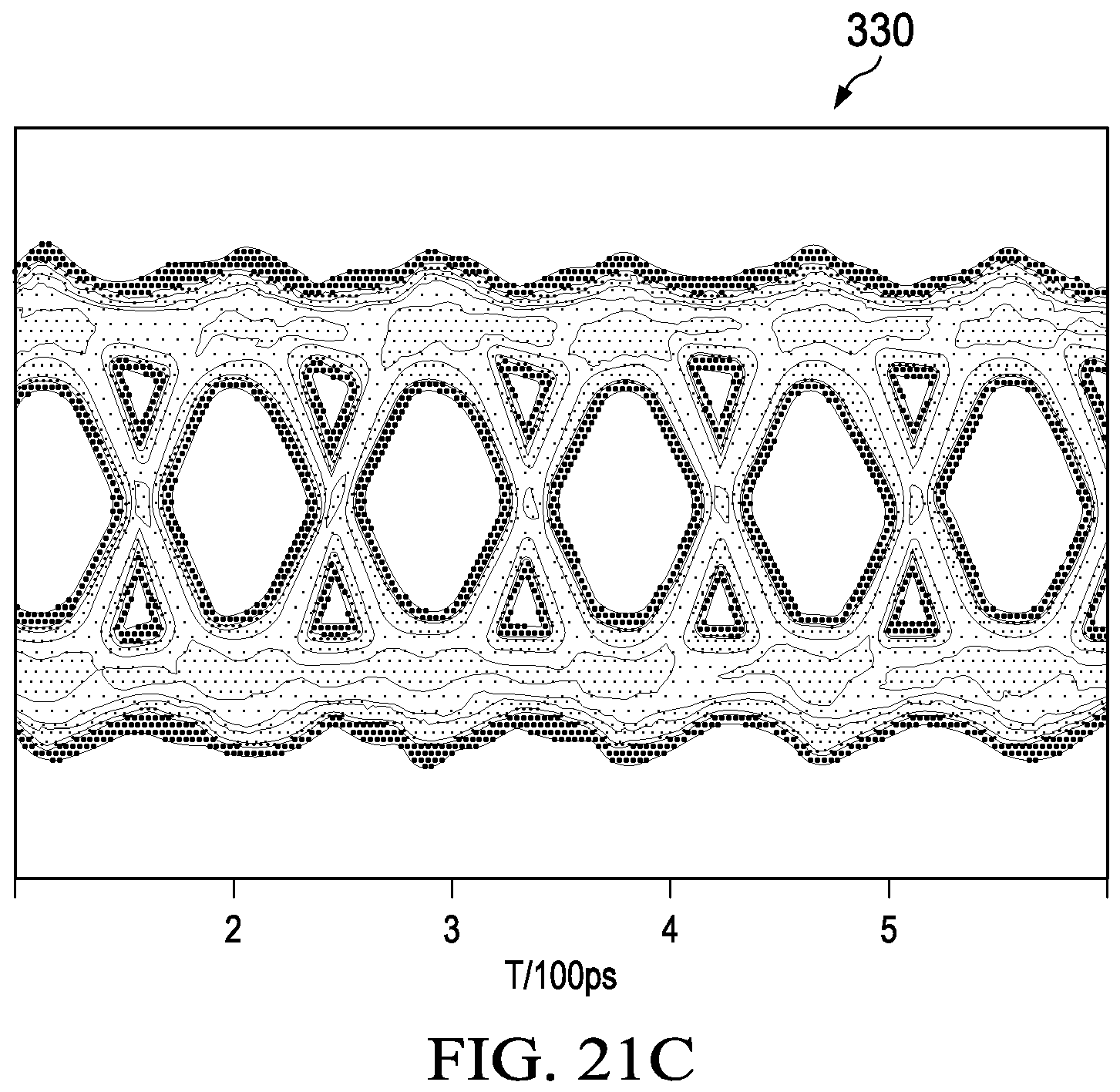 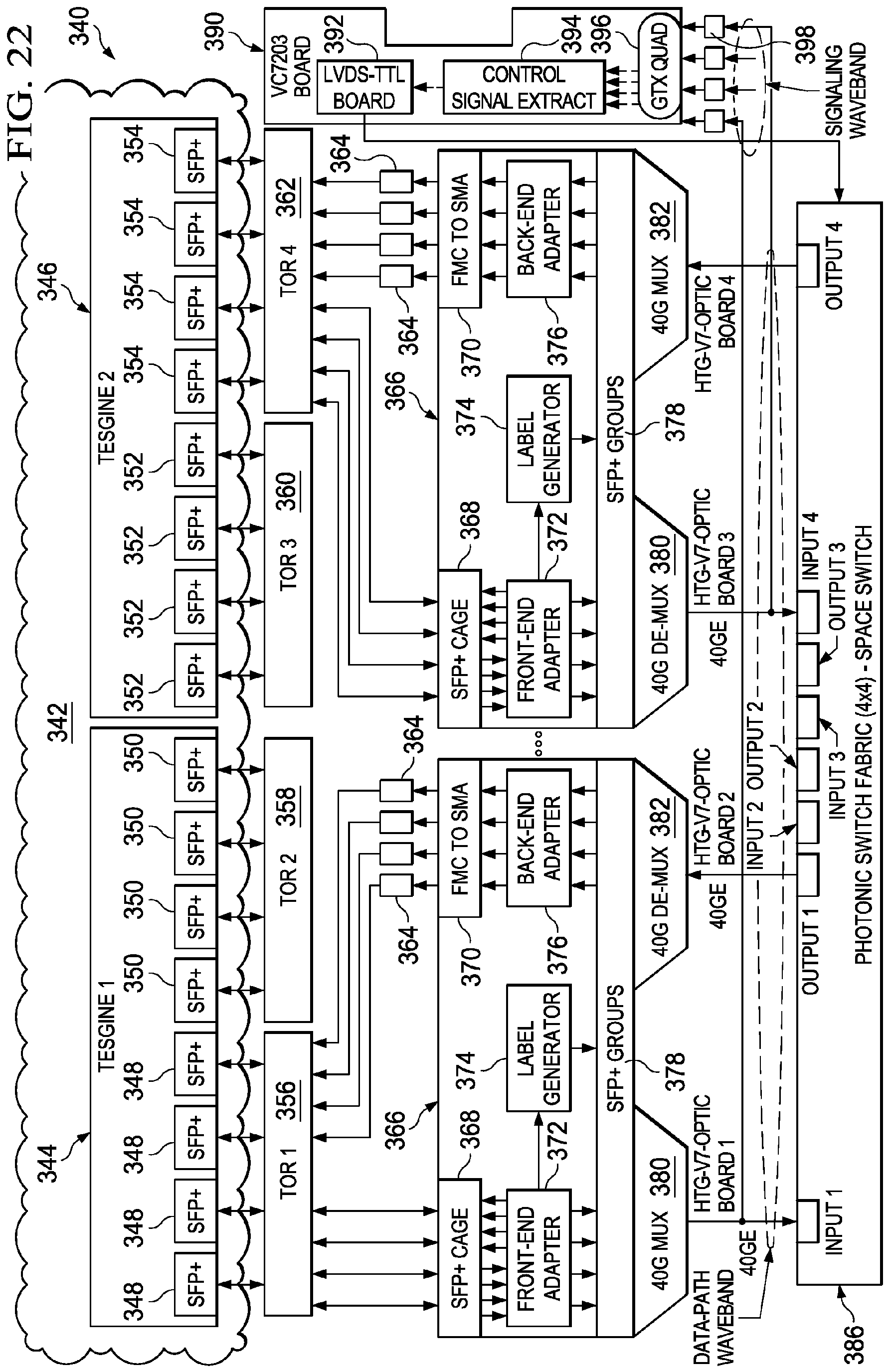