[0007] Fig. 1 illustrates a combined block and flow diagram of an embodiment hereof.

[0008] While embodiments can take many different forms, specific embodiments thereof are shown in the drawings and will be described herein in detail with the understanding that the present disclosure is to be considered as an exemplification of the principles hereof, as well as the best mode of practicing same. No limitation to the specific embodiment illustrated is intended.
[0009] In one aspect, facial and/or voice recognition systems or circuitry can be combined with random actions requested by the authentication system to confirm both that the detected imagery/audio is from an authorized user and that the user is present in person. In a disclosed, exemplary system, the user, or individual seeking service, or access, would be prompted to perform one or more random actions which cannot be anticipated.
[0010] The system would require the user, or requester, to perform the action(s) within a set period of time. Some examples of these actions include one or more of:

touching your nose with your right thumb

[0011] User facial/voice training during setup and continuous adaption thereafter can be implemented by embodiments hereof to improve the performance of authenticating the requester, or, user. For example, voice training would require the authorized requester, or, user to read a script that characterizes their voice. Specifically to increase security, the training script need not include all of the words in the random passages. In this circumstance, the system would both authenticate the requester based on the correct sounds and apply the new words being introduced once the user was authenticated.
[0012] In another embodiment the system could authenticate the user by whatever criterion was acceptable at the time. Then, it would ask the user to smile or exhibit another gesture or facial image, and learn the new facial biometrics for the action to be used at some later time. At some point later, the system could be updated or may rely on cloud based services to change the collection of actions used to randomize the authentication process.
[0013] In the case of failed attempts, the owner on file can be notified along with a video clip of the failed attempt. As a backup for critical applications such as for a security panel, failed attempts can be immediately viewed and evaluated by a human operator at a central control station. As a deterrent to attempts at defeating the system, recorded video can also be used for criminal prosecution.
[0014] In addition to security panels, this approach can be used to increase the security for any user identity application including but not limited to smartphone access, computers/laptops, security door access, timecards or banking ATMs. Websites could rely on the approach instead of passwords to login to sites. By requiring the user to perform a random action, there is a higher certainty in both that the user is present and of their identity.
[0015] In yet another aspect, the system can instruct the user to perform random actions while applying a combination of voice and facial recognition algorithms relative to captured audio and video. Both embedded and Internet based (cloud based) systems are available.
[0016] For voice recognition, the random phrases could be partially trained. So, some words or sounds were part of the initial training and then the phrases are broken down into structural units of speech (i.e. phonemes) so that the user's voice is evaluated against the training sample rather than the whole phrase. The phonemes that were not part of the original training could be used to refine the original training once all of the other authentication checks passed. The associations betweeen the phonemes and collected identity data are managed in the Authorized User Reference Database. For voice recognition, a Random Phrase Generator can create a new challenge phrase based on the identified phonemes and phonetic dictionaries. One such alphabet for phonemes is the International Phonetic Alphabet. This system could be used for any spoken language.
[0017] For facial recognition, separate frames of video can be analyzed. In selected embodiments, the changes in key dimensions such as size/shape/distances/color of the eyes, eyebrows, chin, face outline, teeth or mouth relative to the nose or other facial structures can be evaluated. The identity of the requester, or user, can be evaluated through the reading of text, in conjunction with voice and through motion such as the way the hand may touch the face (or the shape of the hand itself).
[0018] It will be understood that neither the type nor the form of use of a randomizing request are limitations hereof. All such randomizing events come within the scope hereof.
[0019] Fig. 1 illustrates an integrated system 10 and flow diagram 100 illustrating an embodiment hereof. System 10 includes one or more user or requester input devices 12, 12a which can be the same or different. Representative input devices include key pads, touch screens, card readers, wireless receivers and the like without limitation.
[0020] An unknown user or requester U1 can make an access request via input device 12, as at 102, while providing minimal identification information. Alternately, an access can be provided by user U2 in combination with partial identifying information, via input device and circuits 12a.
[0021] The user inputs can be coupled to identification circuits 14 which can select a random identification action, as at 104. An updatable identification data base 16 can be interrogated by the circuits 14 which can select the random identification action.
[0022] The selected identification action can be presented at 106, in a verbal or visual format via user output device and related circuits 20. Representative random action requests can include a text request displayed on a screen of the device 20. For example, read this ..., or do this... Alternately, audio instructions can be output via device 20, such as, repeat the following. In yet another alternate, a visual behavior such as touch your nose, or, touch your ear, can be requested.
[0023] The provided responses are received at a response input device 22. Device 22 can include one or more microphones or cameras. As illustrated, at 108, the received audio or video characteristics of the user, or requester such as U1, or U2 can be recorded, analyzed and measured as at 108.
[0024] The received responses, as may be processed including phonetic data, facial measurements, relative timing or pitch contours, all without limitation, can be stored in one or more storage devices as at 112. Evaluation circuits 28 coupled to the response input device 22 and an authorized user reference database 30 can compare the received responses to expected responses, as at 114. In this regard, where partial identifying information has been provided via device and circuits 12a, that information can be incorporated into the evaluation by circuits 28.
[0025] Depending on the results of the comparison at 114, a determination can be made, as at 116 as to the identity of the user, and whether the user's request will be granted.
[0026] Those of skill will understand that a variety of homophones and common phonetic sounds can be incorporated into information stored in the identification action data base 16. Some examples of these and their International Phonetic Alphabet translations include:

I spent hours on the airplane (match aw

[0027] The random action selection process, as at 104, can request a user, or requester to perform a second identification action to collect new identity references for future access once the user has been authenticated. Alternately, the user can be asked to perform a combined action that authenticates while collecting additional identity information, such as reusing words or phrases or phonemes or using homophones. Advantageously, in both modes, the system performs continuous adaption to tune authentication based on known reference information to determine acceptable variability of received responses.
[0028] In summary, the combination of these approaches with a randomized action determined by the secure system can increase the certainty of the identity of the user. In a further aspect, the above described method can also be used by a website to test for human interaction without identification. By requesting a user, or requester, to perform random actions as described herein it becomes more difficult for an intruding computer system to generate correct audio and video responses in an allotted time interval. The likelihood of successful intrusion is thereby reduced.
[0029] A simplified version of this computing system could also be used as a "reverse Turing test" administered to simply determine whether the unknown user is a human by challenging them to perform these random actions. For example, a website could test the unknown user to perform the action and test for basic facial/vocal matches to prevent bots from posting spam or skewing online polls. This would be applicable for low security needs as well as where the bandwidth, processing and/or database constraints are limited.
[0030] From the foregoing, it will be observed that numerous variations and modifications may be effected without departing from the scope of the appended claims. It is to be understood that no limitation with respect to the specific apparatus illustrated herein is intended or should be inferred. It is, of course, intended to cover by the appended claims all such modifications as fall within the scope of the claims.
[0031] Further, logic flows depicted in the figures do not require the particular order shown, or sequential order, to achieve desirable results.

storing the initial biometric data in an authorized user database (30);

receiving a request for service (102) including an identifier from a requesting user;

receiving the random physiological response from the requesting user;

determining whether the random physiological response received corresponds to a predetermined response (114); and

determining that the requesting user is the authorized user when the random physiological response received corresponds to the predetermined response. 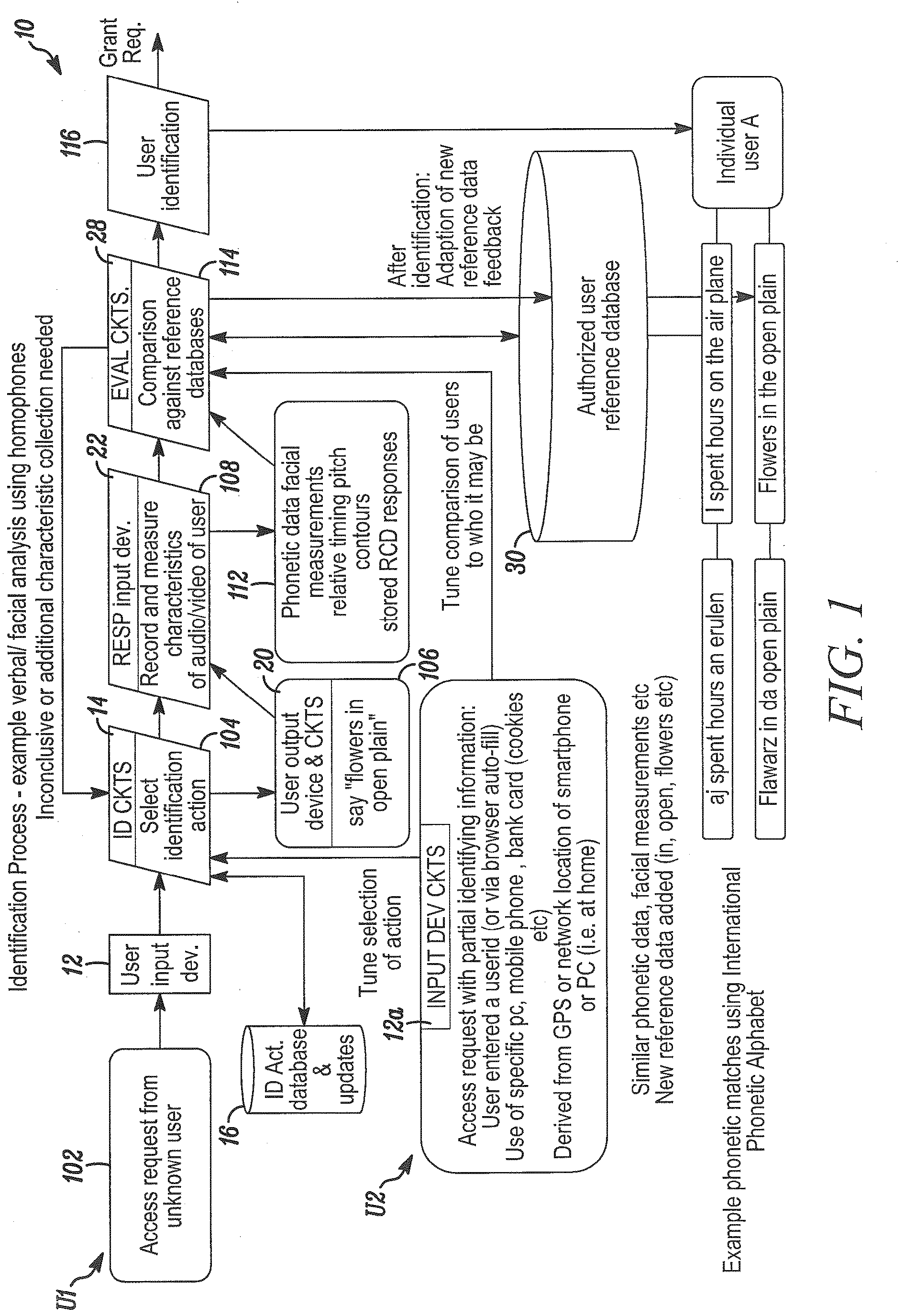