[0021] Another possible strategy to simplify the handling of the reagents is to combine the different reagents necessary for one test in liquid phase in their working concentration. The main problem here is the interaction of the different substances while staying together for a longer period. Some components negatively affect the stability of each other when staying together in the liquid phase at higher concentrations; for example, CaCl2 disturbs the stability of Tissue Factor reagent in liquid phase over the time.
[0022] Moreover, if these combined reagents should be provided in an amount sufficient for exactly one test, another problem would arise: In this case, the very small portion of liquid reagent might stick to parts of the reagent container or the cap and might thus not mix sufficiently with the test liquid when the analysis is performed.
[0023] One strategy proposed to solve the named aspects was disclosed by Kolde et al. in US patent application 20040071604. In this application, a cup system for viscoelastic analyses is presented, in which the lower end of the cup is divided in several reagent chambers. This allows to place the reagents independently into the different chambers, without mixing them and then to freeze-dry the reagents.
[0024] However, disadvantages of this solution include the need for a very precise pipetting process, as the separate reagent chambers are very small and also the problem that the reagent drops might still mix before the freeze-drying by vibrations present on the reagent filling line. Another problem is the possible air-drying of the small reagent drops during the processing under room conditions before the lyophilisation process starts. Again the problem of automatically handling the small plastic and thus very light using standard reagent-filling lines is present.
[0025] The most coagulation test methods in routine lab use just measure the time from adding an activator to the sample until the first initial formation of a fibrin clot can be detected (= clotting time). They stop at this point and no further measurement is done. This has the implications, that in these methods a firm adhesion of the blood to the surfaces of the measurement cell is not necessary. Accordingly, the variety of analyzers and reagents available for the assessment of clotting times with such methods does not have to handle the unique problems connected with viscoelastic measurements.
[0026] EP 0 972 203 describes a reagent for determining aPTT, comprising at least one coagulation protein, phospholipids and an activator of intrinsic coagulation in co-lyophilized form. However, here the problem arises that all components required for performing the analysis are in immediate contact with each other. Therefore, problems regarding long-term stability or incompatibilities may occur by using substances in this form.
[0027] WO2008093216 discloses diagnostic compositions, containers, method and uses for performing one single viscoelastic measurement lacking however the aspect of providing the reagents in spatially separated form.
[0028] US4755461 teaches to incorporate tissue factor and CaC12 into different tablets, since these reagents were found to be incompatible even when provided in dry form in a mixture.

[0029] Therefore, it is an object of the present invention to provide a diagnostic composition, which allows for a safe, reproducible and easy to use procedure for different tests in viscoelastic systems. It is a further object of the present invention to provide a diagnostic composition which is specifically adapted to one single analysis of a blood sample and has a superior reagent stability regarding prior art compositions. It is a still further object of the present invention to provide a diagnostic method which provides reliable and reproducible results, is easy to handle and which provides a standardized system for the determination of the coagulation characteristics of a blood sample. A further object of the invention is to provide a diagnostic composition of the above kind, having an improved long-term stability.
[0030] These objects are attained by the diagnostic composition of claim 1, the container of claim 9, the method of performing a viscoelastic analysis on a test liquid of claim 12 and the use of claim 14.
[0031] Preferred embodiments are set forth in the dependent claims.
[0032] By using the diagnostic composition of the invention, the tests may be performed as follows: a defined volume of a sample, namely whole blood or blood plasma, is added directly into a container 1 containing the diagnostic composition. After dissolving of the composition in the blood sample, the resulting mixture is pipetted from the container 1 into the measuring cup 2 of a measuring apparatus 4. The cup 2 is then put into a position such that the pin 3 is immersed into the liquid in the test cup (cp. Fig. 2).
[0033] Therefore, the user needs only 4 pipetting steps for each test to perform (in the prior art liquid system up to 8 steps, see above) and no change of the pipette tip is necessary.
[0034] Thus, it is clear that the present system for the determination of coagulation characteristics of a blood sample can be handled easier, thereby making the likelihood of errors smaller, which can be due to an imprecise line of action by a (potentially less experienced) operator.
[0035] According to the invention, the constituents are not present in a substance mixture, but in spatially separated form, wherein the constituents are each incorporated in spatially separated pellets.
[0036] This allows for an improved long-term stability of the composition without deteriorating its other characteristics.
[0037] Therefrom, further advantages may arise as, for example, a higher reproducibility of the results to be achieved, and thus, a higher degree of standardization.

BRIEF DESCRIPTIONS OF THE DRAWINGS

[0038] Further features and advantages of the present invention will be evident from a description of embodiments with reference to the figures.
[0039] In the figures:

Figure 1 is an exemplary diagram showing a typical thrombo-elastometric measurement;

Figure 2 is showing a measuring apparatus 4 for thromboelastometric analysis;

Figure 4A, B, C are schematic cross-sectional views of three preferred embodiments of a container 1 of the present invention.

1. A diagnostic composition for use in the viscoelastic analysis of a test liquid selected from whole blood or blood plasma, comprising:

a) at least one activator of coagulation selected from tissue factor (TF);

b) a calcium salt, preferably CaCl2, in an amount sufficient to ensure recalcification of the test liquid; and,

c) one or more inhibitors of heparin, platelets or fibrinolysis;

3. The composition according to claim 2, where the carrier material shows no significant influence on the clotting behaviour, the clot formation behaviour, or the clot lysis behaviour.

4. The diagnostic composition of claim 1, wherein the Tissue Factor is selected from lipidated TF or rTF.

7. The diagnostic composition of one or more of the preceding claims, which further comprises a stabilizer, or
wherein the stabilizer is albumin or gelatine.

9. A container, comprising the diagnostic composition of one or more of claims 1-8.

10. The container of claim 9, wherein the container (1) takes the form of a vial or a cuvette, and preferably is formed in a way that the inner lateral profile reduces from the opening to the bottom.

11. The container of claim 9 or 10 with its inner portion shaped in a manner that it can be attached to a device for performing viscoelastic measurements, and preferably is consisting of at least two different materials, where one material forming basically or at least partially the outer shape of the container enables hermetical sealing of the container by a suited cover, while the other material basically covering the portion conceiving the test liquid enables proper adhesion of blood or blood components without activating the coagulation cascade.

12. A method of performing a viscoelastic analysis on a test liquid selected from whole blood or blood plasma, comprising the steps of:

a) providing a test liquid selected from whole blood or blood plasma; 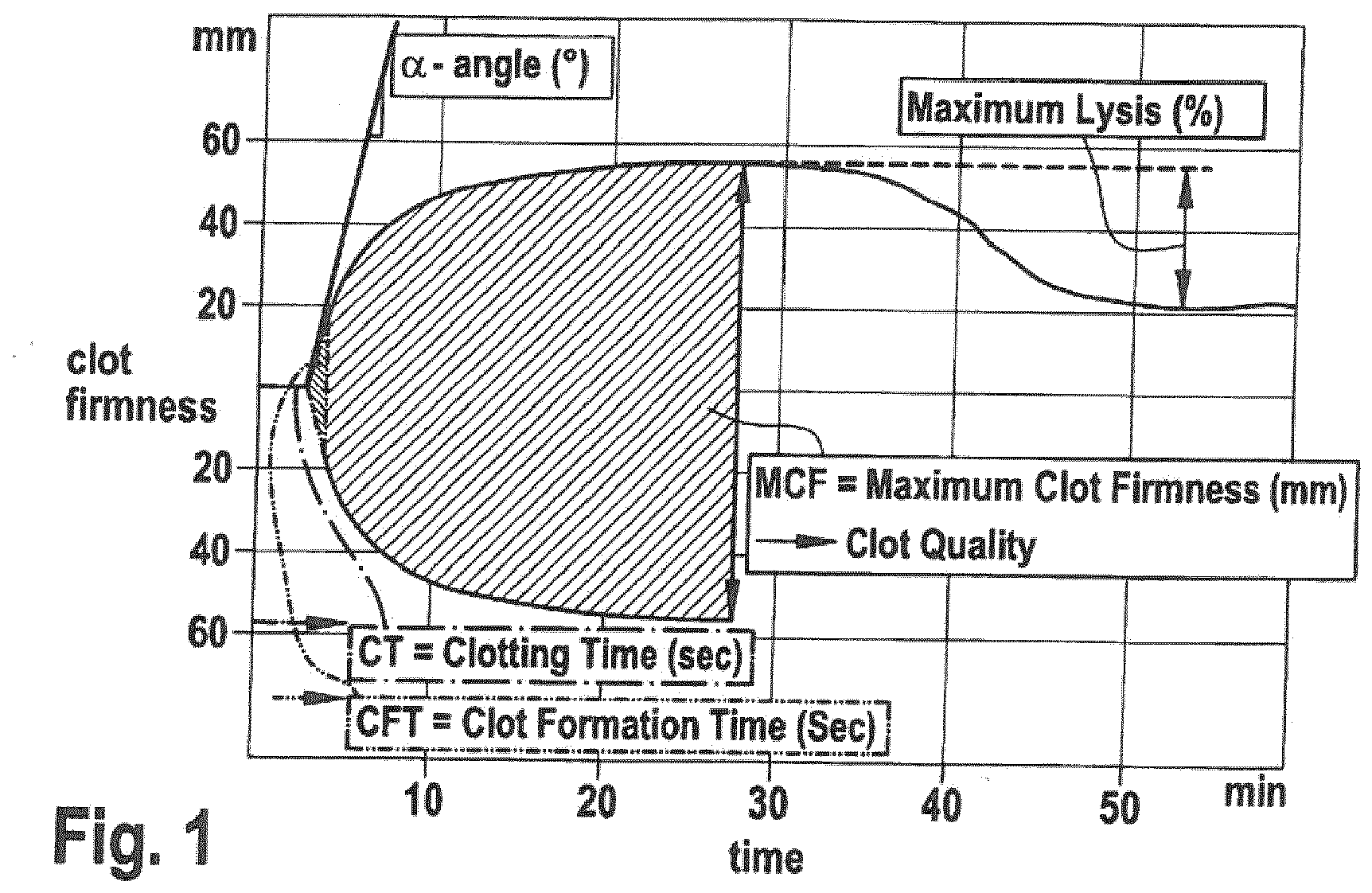 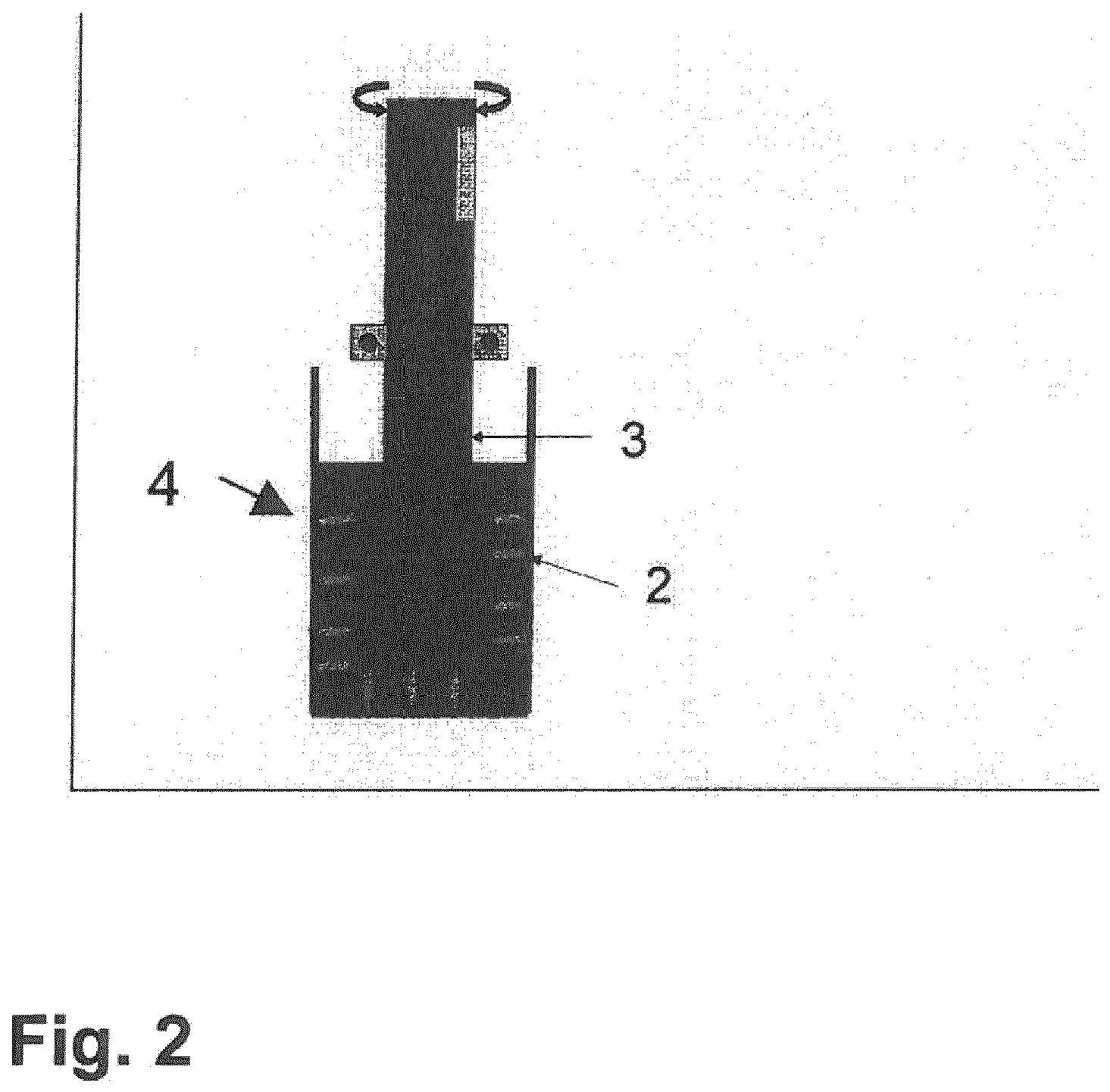 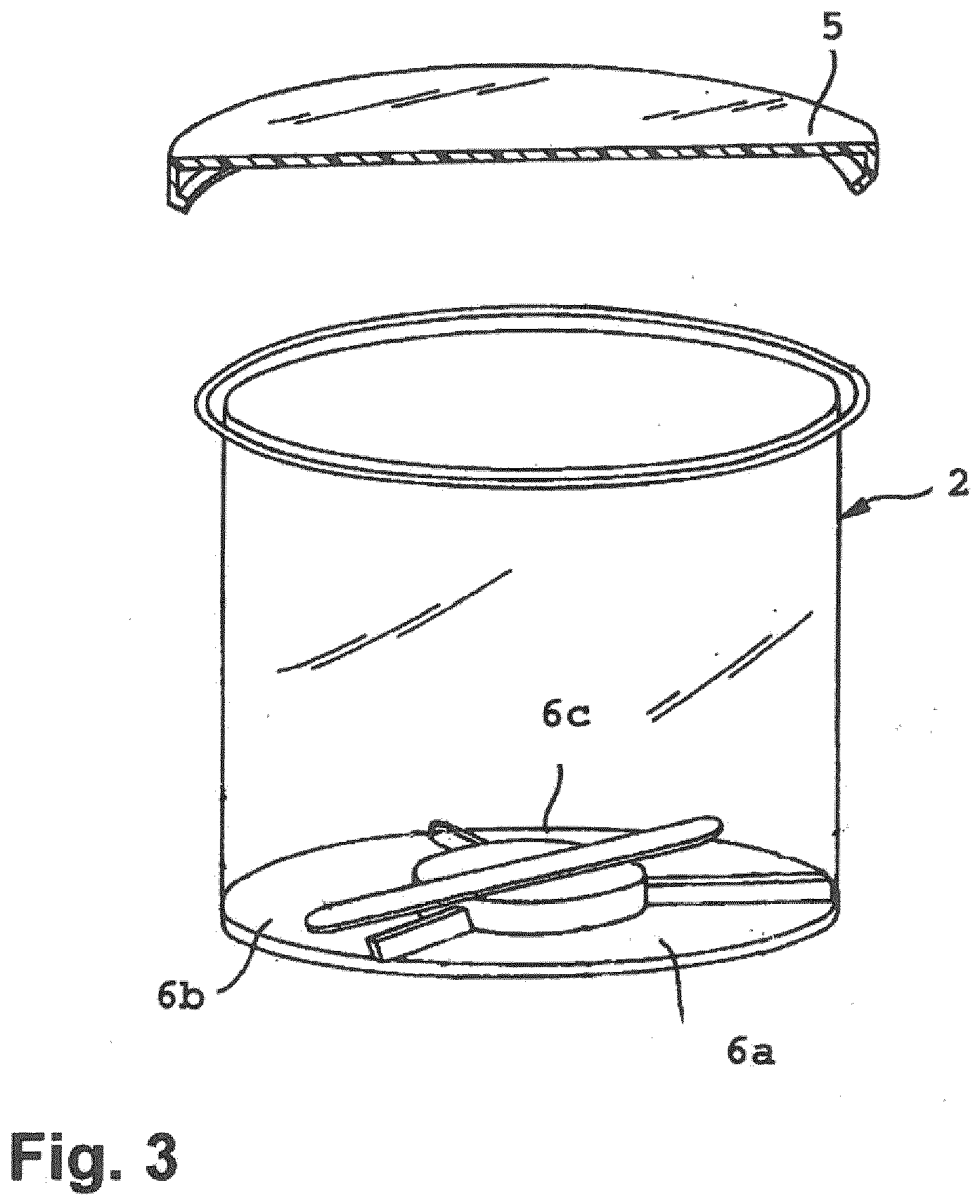 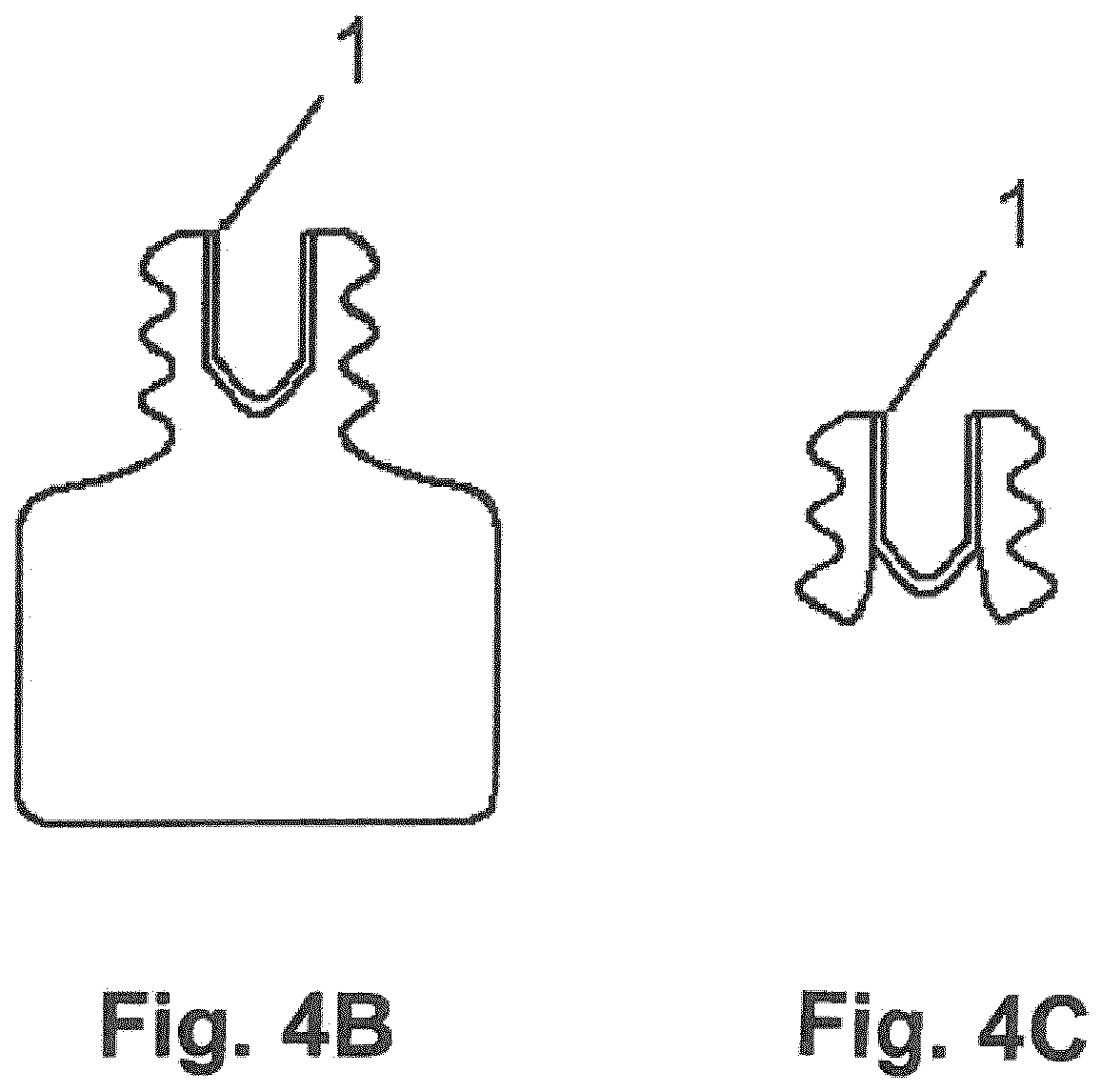