[0001] The present invention is directed to a method and a frame for control of a plurality of end-points by a plurality of base stations in wireless networks, particularly, but not exclusively, when the throughput of the network system is a limiting factor and the network adopts a synthesized chirp modulation scheme.

[0002] Digital wireless data transmission is used in a wide variety of systems that present a great variability in both in data rate, transmission range, and power consumption. Spread-spectrum modulation techniques are used to improve the immunity to noise and interferences in radio communication, the various Bluetooth® protocols are examples of such techniques. These modulation schemes use frequency-hopping spread-spectrum and achieve low consumption and good bandwidth, but their range is limited to a few meters.
[0003] Direct-sequence spread-spectrum techniques are also known and can reach very high levels of coding gain. In some cases, like in GPS system, have shown excellent noise immunity over long ranges. Limitation of these techniques are however the comparatively high complexity of the receivers, the acquisition times that can be very long for weak signals, and their power consumption.
[0004] European patent application EP2449690 describes a communication system using digitally-synthesized chirp symbols as modulation, and a suitable FFT based receiver.
[0005] Chirp generation in various kind of radiofrequency circuits is known, for example US6549562 describes a method for generating modulated chirp signal, while EP0952713 shows a synchronization process based on chirp signals.
[0006] US6940893 and US6614853, among others, describe generation and use of chirp signal by passing an impulsive signal through a dispersive filter, and communication schemes based thereupon.
[0007] Other references known in the art describe a communication system using digitally-synthesized chirp symbols as modulation, and a suitable FFT based receiver. European patent application EP2763321 describes, among others, one such modulation method in which the phase of the signal is essentially contiguous, and the chirps are embedded in data frames in in such a way as to allow synchronization between the transmitter and receiver nodes, as well as determining the propagation range between them. This modulation scheme is used in the long-range LoRa™ RF technology of Semtech Corporation, and will be referred simply as 'LoRa' in the following of this document.
[0008] The chirp spread spectrum (also CSS in the following) communication systems mentioned above are especially useful in the deployment of network of a large number of end nodes, which to transmit a limited amount of data, with low power and over long ranges. When the number of nodes in the network increases, however, communications can be limited by the maximum available network capacity. There is therefore a possibility and a need on improving on the aggregated capacity of wireless networks based on Chirp Spread Spectrum modulation.
[0009] CSS networks and other networking system can implement different strategies to avoid collisions, or at least reduce their likelihood, and thus make better use of the available capacity. It is known for example to use carrier sense or 'listen before send' protocols to obtain this benefit. These systems cannot however exceed the theoretical capacity of the network and impose always a cost in terms of power consumption and battery life compared to straight random access (also known as ALOHA).
[0010] Other modulation techniques, collectively designated as Narrow band or Ultra Narrow Band (UNB) modulation are known that transmit data through a number of very low bandwidth channels. These system can attain long transmission distances, and promise to deliver excellent spectral efficiency. CDMA is another known modulation that makes very efficient use available spectrum. Both these techniques, however, require considerable processing power and high quality reference (temperature-compensated) oscillators, which limits their usefulness in low-power, low-cost applications. In some applications, narrow-band or ultra-narrow band transmissions are used with standard oscillators, in uplink. In such cases, however, the random frequency drift of the local oscillator alter the frequency, such that the channel boundaries cannot be precisely defined, the collision probability increases, and network capacity is negatively affected.
[0011] US2003022651 and US8175134 disclose communication methods that involve a combination of chirp signals and conventionally-modulated signals.
[0012] Therefore, it is an aim of the present invention to propose means and methods capable of improving the spectral efficiency of existing chirp-spread spectrum networks.

Disclosure of the invention

[0016] The above and other aspects, features and advantages of the present invention will become more apparent from the subsequent description thereof, presented in conjunction with the following drawings, wherein:

Figure 1 is a representation of a frame format in a Chirp Spread Spectrum such as proposed in the LoRa protocol;

Figure 2 represents schematically a frame encoding the same content as that in figure 1 according to one aspect of the present invention;

Figures 3, 4, and 5 illustrate collisions in the LoRa protocol, respectively according to an embodiment of the invention and in narrow-band or ultra-narrow band (UNB) modulation;

Figure 6 illustrates an exchange of information between a base station and an end node combining chirp spread spectrum and ultra-narrow band technologies, for uplink and downlink, in accordance with the present invention;

Figure 8 shows how messages can overlap in time without colliding.

MODES FOR CARRYING OUT THE INVENTION

sending a message (305) by a transmitter including a preamble (102) modulated according to a chirp spread spectrum format, and a body (312) comprising data modulated with a narrower bandwidth than the preamble, the data rates of the preamble and of the body being related to one another,

receiving said message in a receiver,

searching the narrow-band signal in said body based on the relationship between data rates of the preamble and of the body, 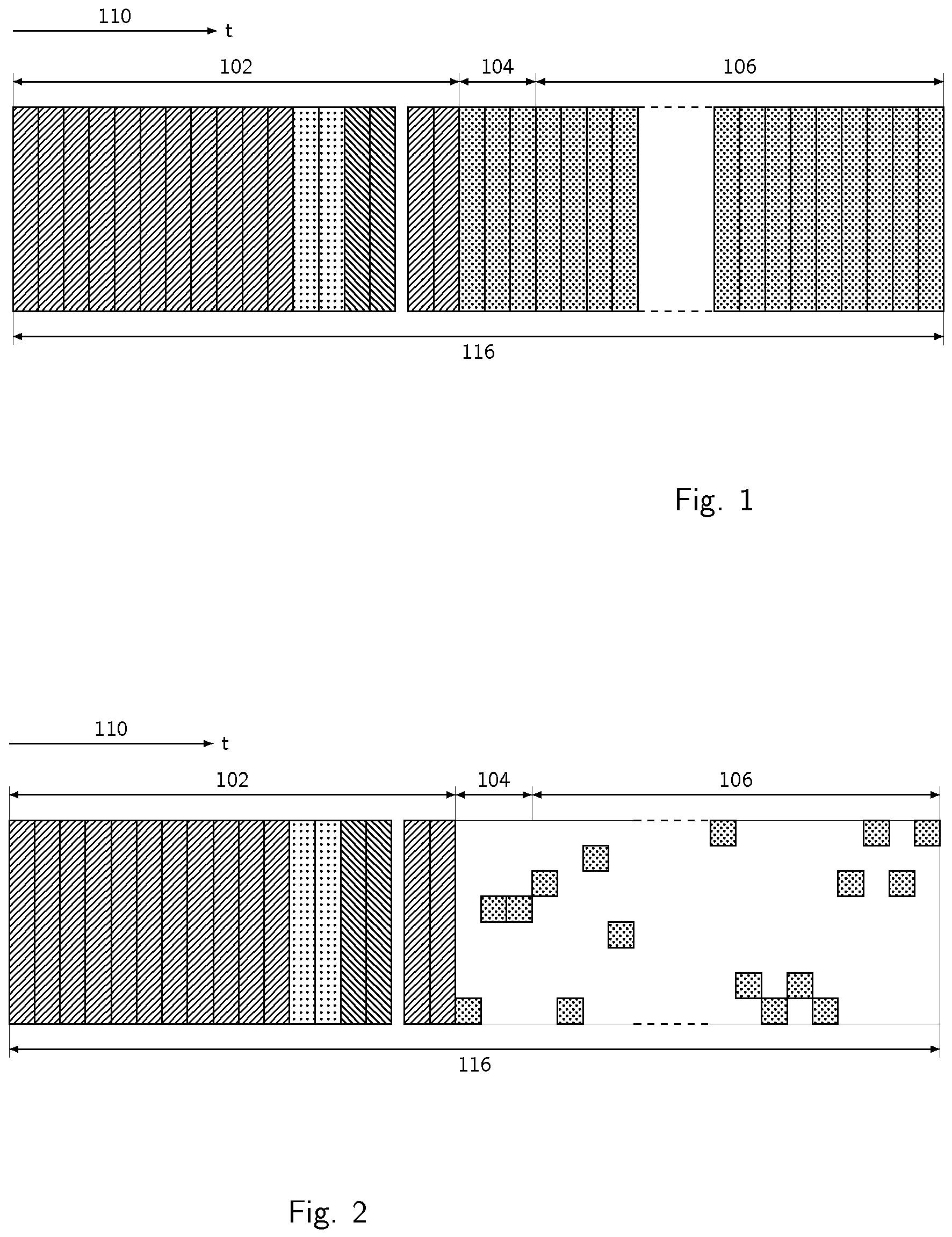 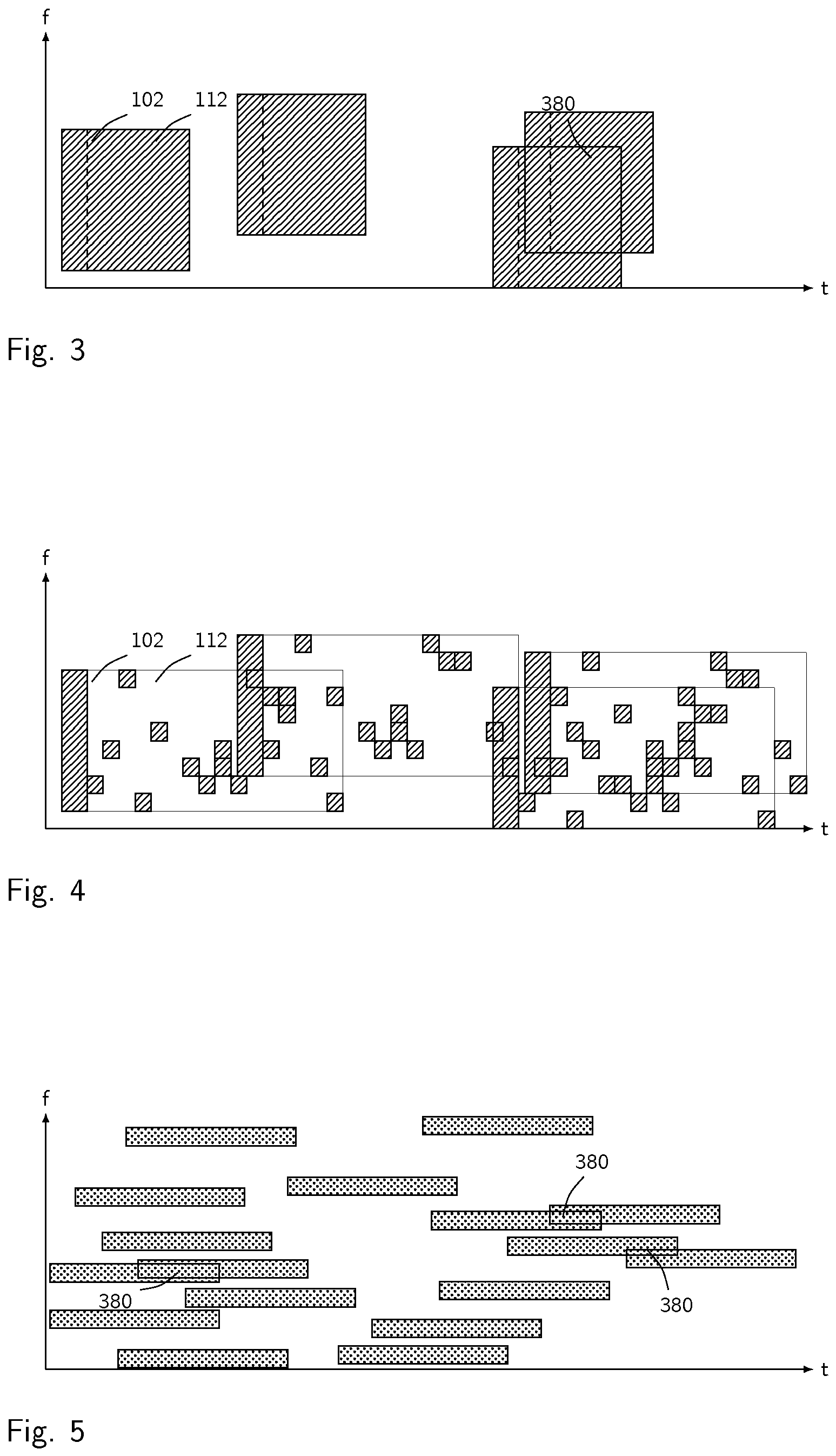 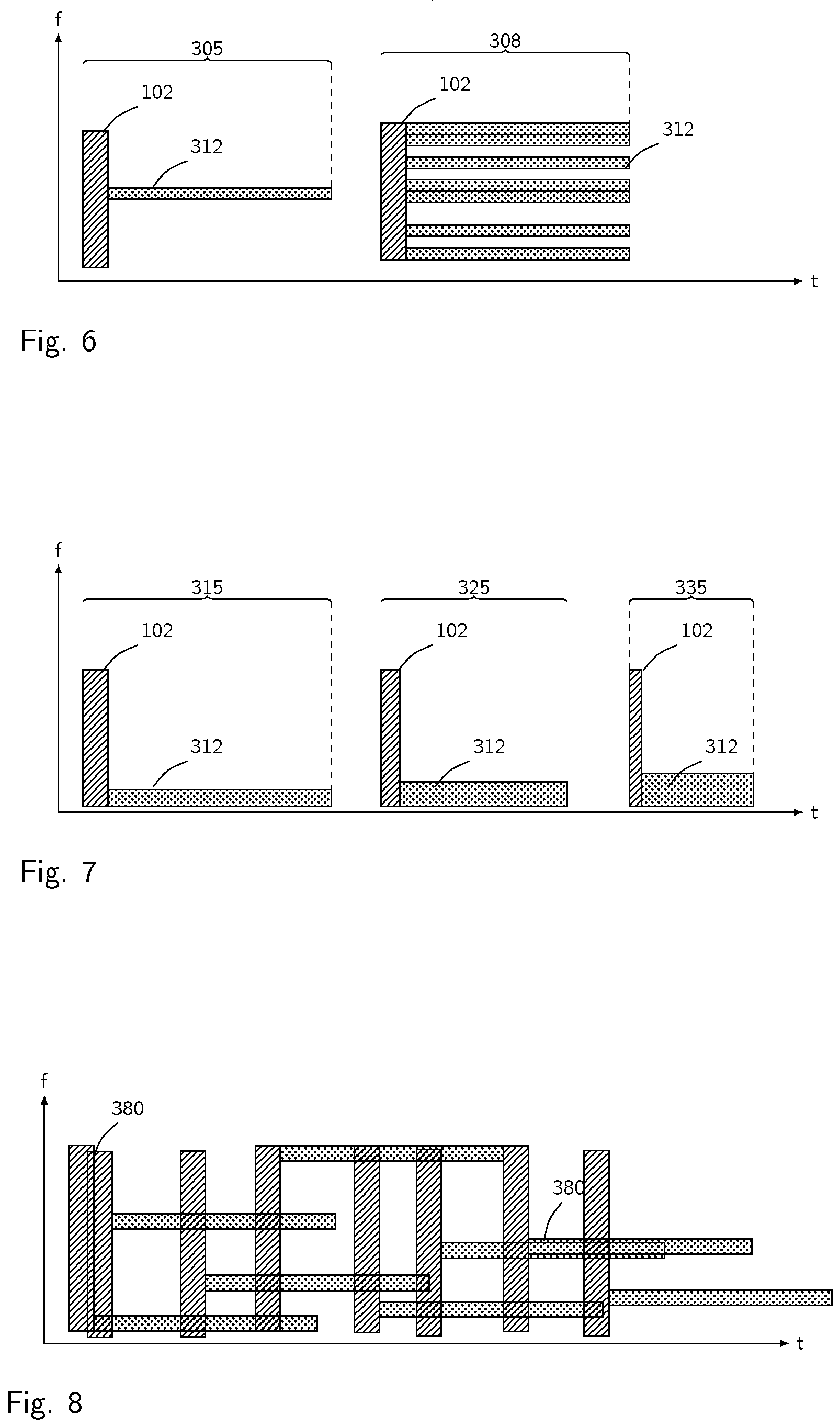