[0004] The present disclosed embodiments relate to a "hybrid" battery that includes sodium at the anode. This hybrid battery is designed for use at a range of temperatures. For example, when the battery is at colder temperatures or when the vehicle is idle and needs to be "started," the anode will be solidified sodium metal. (Accordingly, when metal is plated onto the anode in this state, it is plated as solid metal.) Such batteries using solidified sodium metal could be capable of starting or operating the vehicle at temperatures ranging down to - 30 °C or even as low as -50 °C. At the same time, the battery is designed such that, once the electric vehicle has been "started" and operated for a short period of time, heat from the vehicle's engine is directed to the battery. This heat operates to "melt" the solid sodium anode into a molten form. In other words, after a short period of time, the heat from the vehicle converts the anode into a molten sodium anode. (When the anode is molten, the produced sodium will be molten and will be added to the molten anode.) Solid sodium anodes, while they are appropriate for use at cold temperatures, place high demands on the current density and power of the battery. Thus, by converting the anode into a molten anode (such as, for example, by heating the anode to temperature of from about 100 to 130 °C), the battery would have a greater power and current density than would otherwise be possible with a purely solid-state sodium anode.
[0005] It should be noted that this "hybrid" battery that uses both a solid and molten Na anode (depending upon the temperature) solves some of the problems associated with conventional batteries. For example, batteries that only use a molten Na anode can only be operated at temperatures of about 100 °C or higher, and thus may not work at colder temperatures. However, having the ability to use the battery (e.g., use the battery to "start" the vehicle engine) at temperatures below 100 °C (and even at temperatures as low as -50 °C) is a necessity for any elective vehicle battery so that the vehicle will continue to work during the colder winter months (or in colder climates). At the same time, having the battery use a molten Na anode after a period of time (e.g., after having heat from the vehicle be directed to the anode to cause the Na to melt) also achieves a beneficial property in that a molten Na anode provides greater efficiency and greater power than would be available with a solid Na anode. Thus, the present battery provides the advantages associated with using a molten Na anode, but also provides the ability to start the vehicle and use the battery at lower temperatures (e.g., solves the "cold start" problem).
[0006] US2012/141856 discloses a molten sodium anode battery of the prior art and US2011/104526 discloses a solid sodium anode battery of the prior art.

[0007] In order that the manner in which the above-recited and other features and advantages of the invention are obtained will be readily understood, a more particular description of the invention briefly described above will be rendered by reference to specific embodiments thereof that are illustrated in the appended drawings. Understanding that these drawings depict only typical embodiments of the invention and are not therefore to be considered to be limiting of its scope, the invention will be described and explained with additional specificity and detail through the use of the accompanying drawings in which:

Fig. 1 is a diagrammatic representation of a hybrid sodium anode electric vehicle battery within the scope of the disclosed invention.

Fig. 2 is a schematic representation of the hybrid sodium anode electric vehicle battery of including optional anolyte and catholyte reservoirs.

Figs. 4A-4C are schematic representations of three modes of operation of the hybrid sodium anode electric vehicle battery of Fig. 2.

[0046] With the use of a NaSICON membrane separator, one may use two separately optimized electrolytes without concern of the electrolytes mixing between the cathode and anode compartments.
[0047] The "nickel" cathode has previously been extensively developed and used in commercial Ni-MH and Ni-Zn batteries. This cathode functions in an aqueous concentrated alkaline NaOH catholyte and the solid NaSICON membrane serves to separate it from the anode compartment. The relevant electrochemical reactions for the Na-NiOOH battery are:

The net reaction is:

[0048] The second cathode is the sulfur cathode, which has great potential because it is light, energetic, inexpensive and readily available. Its theoretical capacity is 1672 mAh/g (based on conversion to Na2S), which is one of the highest known using non-gaseous constituents. With this cathode, an ionic liquid or even water may be used as the catholyte and that this material can dissolve lower and higher sodium polysulfides, thereby making a low temperature liquid sulfur cathode analogous to high temperature one. One of the advantages of using sulfur materials with an ionic liquid is that there is no vapor pressure and there can be a more sealed system. Also, the sulfur cathode is safe to use. The theoretical specific energy of the Na-S cell operating at low temperature is 954 Wh/kg, which is higher than that of the high temperature Na-S cell because it can be cycled between sulfur and sodium sulfide materials as shown the reactions below:

[0049] The third cathode set forth in Table 1 is analogous to how a lithium ion battery cathode operates. The sodium metal carbonophosphate cathode reaction is:

[0050] In the case of the first two cathodes, ions involved in the oxidation and reduction of the metal cathode are stored in the electrolyte necessitating a high volume of electrolyte. The exact volume of electrolyte needed will be determined by the solubility of that ion in the catholyte. This requires a thick layer of electrolyte (driving up the catholyte resistance) or a flow catholyte where the ion reservoir is held at a separate location. In the carbonophosphate cathode, the electrolyte serves as the sodium ion reservoir so that a thin layer (as thin as physically possible) is sufficient for sodium ion transport. The metal carbonophosphate changes phase to a sodium metal carbonophosphate. Magnesium carbonophosphate is presently preferred.
[0051] A metal halide cathode system may also be suitable in the disclosed hybrid battery. This is analogous to the ZEBRA battery cathode. The choices are chlorides, bromides and iodides of zinc, copper or nickel. ZnCl2 would be a suitable example, but CuCl and NiCl2 could also work and could provide higher voltages and may be better choices for reversible plating. The catholyte could be a sodium halide dissolved in ionic-liquid.
[0052] There are a number of important advantages of the disclosed hybrid battery chemistries. First, the battery cell voltages are expected to be relatively high (> 2.0 V) and the cathodes with large capacities so the resultant energy density is high. Consequently, fewer cells are required to reach the high voltages (e.g., 40 V) and energy densities needed for electric vehicle use. Second, the active material costs are low and can be acquired in commodity-size quantities with little or no additional processing required prior to incorporation into the battery. These active material cost estimates are well within the requisite price point necessary for easily meeting DOE cost targets. Third, the moderate temperature of operation (< 130 °C) facilitates the use of low-cost polymeric materials for battery construction. Finally, all of the active materials are available from domestic sources, and in fact the United States has historically been a net exporter of some of these materials.
[0053] Table lists some important fabrication and manufacturing advantages of the disclosed hybrid sodium anode batteries relative to the known high temperature NaS/ZEBRA batteries.
Table 2.

[0054] It should be noted that some electrical vehicles have requirements regarding the temperature of the external case of the battery. The purpose of this requirement is to keep this case sufficiently cool so that it may be touched by the vehicle driver. (In other words, if the vehicle driver opens the hood of the car and touches the battery case, it should not be "too hot" such that it burns his/her skin.) More specifically, many electric vehicle batteries require that the outside case of the battery not exceed a temperature of 52 °C (or perhaps 55 °C). Given that the internal workings of the battery may involve having molten sodium at temperatures between 100-130 °C, there should be ample insulation (with acceptable thermal resistance) in the battery case or in other parts of the battery to ensure that the outer battery case temperature does not get too hot. However, such insulating is commonly known and may be easily achieved.
[0055] The scope of protection is only limited by the scope of the accompanying claims.

1. A hybrid sodium anode battery for an electric vehicle comprising:

a sodium anode in contact with a supply of anolyte solution;

a cathode in contact with a supply of catholyte solution; and

a NaSICON sodium ion conductive solid membrane separating the catholyte from the anolyte;

wherein the anolyte solution comprises an ionic liquid (IL) containing dissolved sodium ions and wherein the IL has a density different from the densities of solid sodium and molten sodium;

an anolyte solution outlet; and

a catholyte solution outlet; and

4. The battery of any preceding claim, further comprising:

an anode current collector in electrical contact with the sodium anode; and

a cathode current collector in electrical contact with the cathode.

7. The battery of claim 1, further comprising a sodium reservoir coupled to the sodium anode to accommodate fluctuations in the volume of sodium anode during operation of the battery.

8. The battery of claim 1, further comprising insulation on an exterior case of the sodium anode battery to maintain a temperature on the exterior case less than or equal to 52 °C.

9. A method of operating a hybrid sodium anode battery for an electric vehicle of claims 1 to 8, comprising:

heating the sodium anode to convert the anode into a molten state; and

an anolyte solution outlet; and

wherein the method further comprises circulating anolyte solution to the anode compartment while the sodium anode is in a solid state.

11. The method of operating a battery of claim 10, further comprising ceasing the circulation of anolyte solution to the anode compartment while the sodium anode is in a molten state.

12. The method of operating a battery of any of claims 9 to 11, further comprising charging the battery while the sodium anode is in a molten state. 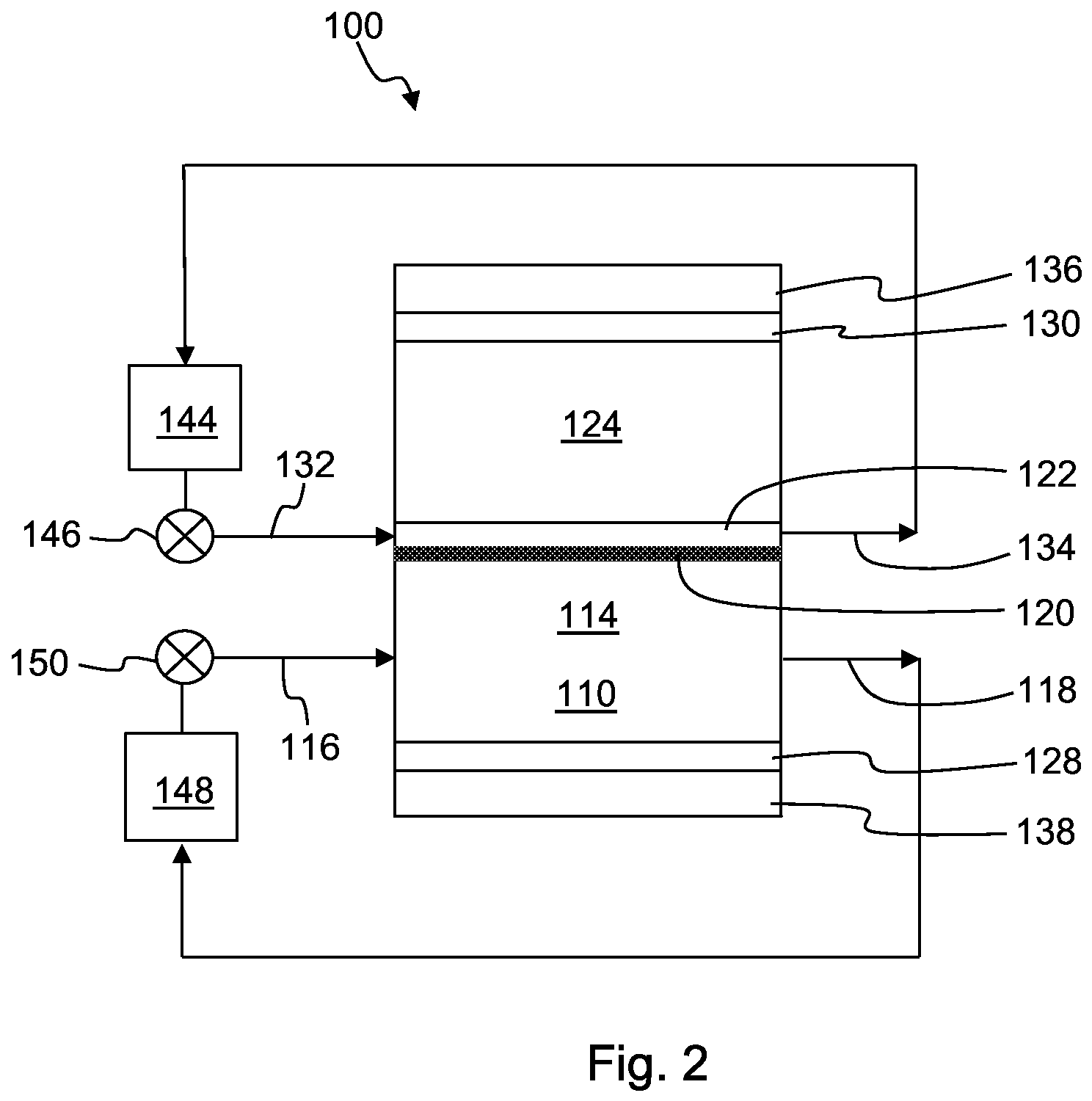 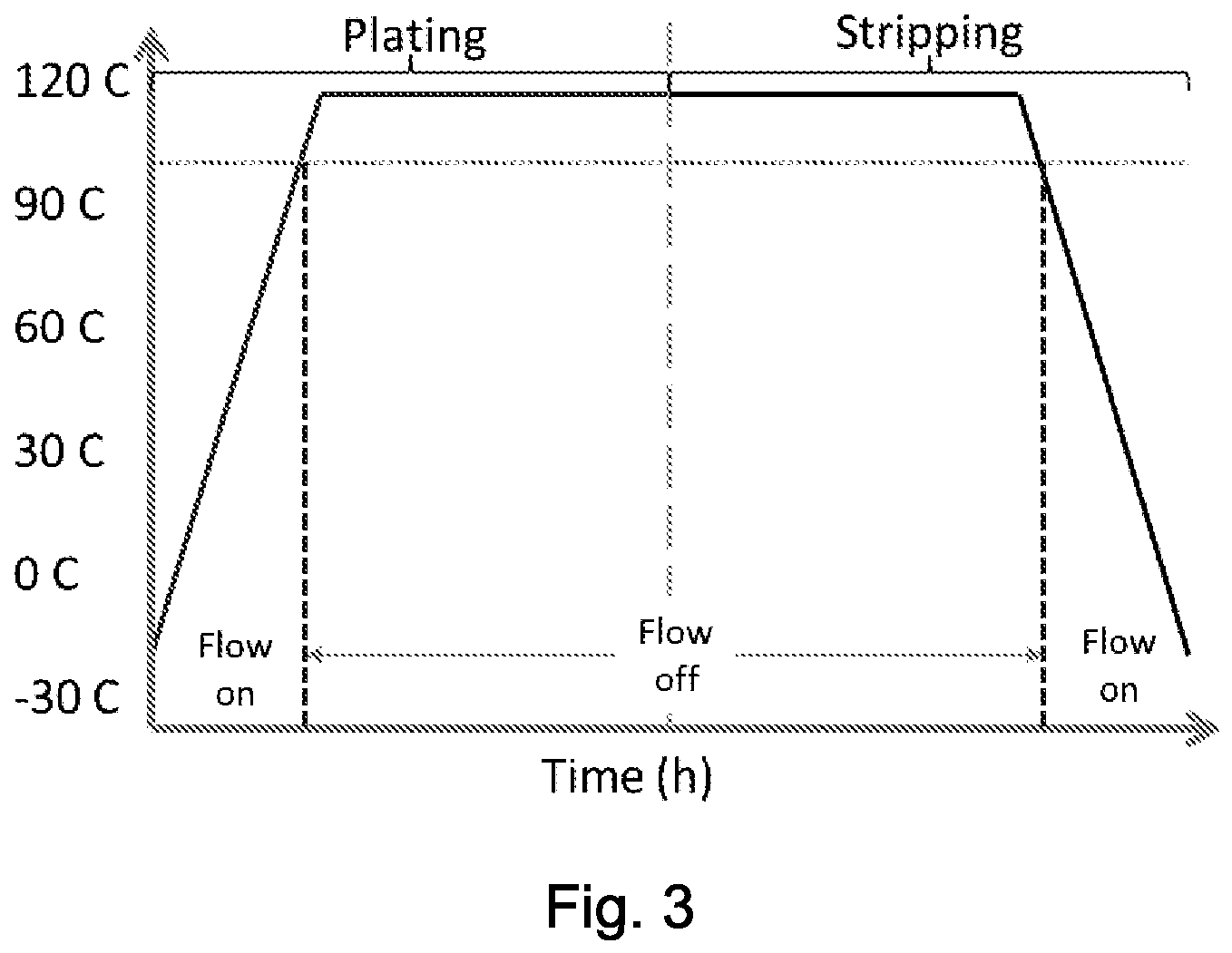 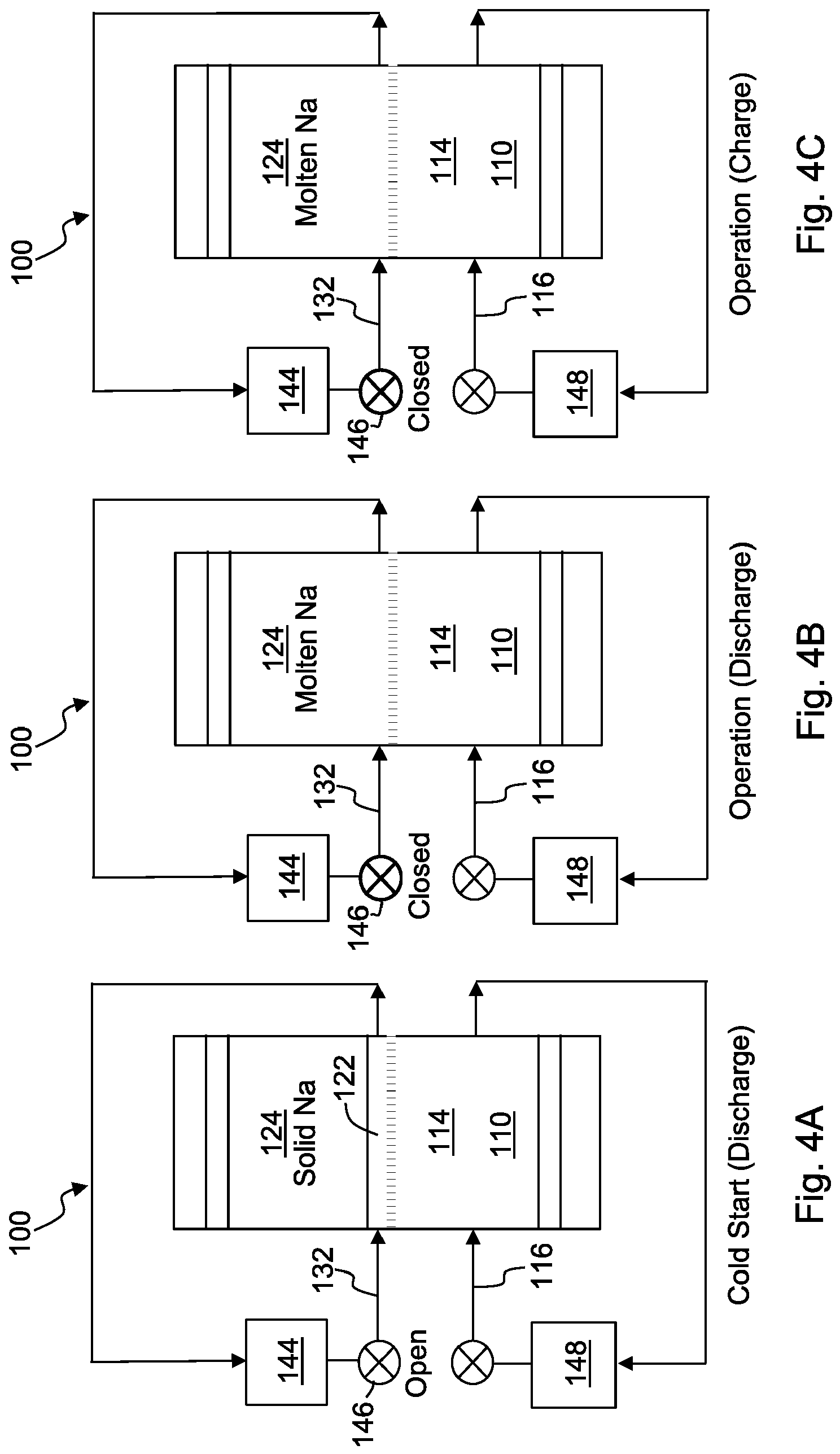