[0001] The invention is related to an electrical oil formulation comprising a base oil and an additive.

[0002] US-A-6790386 describes a dielectric fluid comprising an iso-paraffin base oil and additives. The iso-paraffin base oil is prepared by hydrotreating,
hydroisomerisation and hydrogenation of a paraffinic vacuum feedstock.
[0003] US-A-5912212 describes oxidative stable oil lubricating formulations consisting of a hydrocracked paraffinic mineral base oil, 3-methyl-5-yert-butyl-4-hydroxy propionic acid ester, dioctylaminomethyltolyltriazole and dilaurylthiodipropionate. The oil had a high oxidative stability.
[0004] WO-A-02070629 describes a process to make iso-paraffinic base oils from a wax as made in a Fischer-Tropsch process. According to this publication base oils having a kinematic viscosity at 100°C of between 2 and 9 cSt can be used as base oil in formulations such as electrical oils or transformer oils.
[0005] There is a desire to formulate electrical oils using a base oil having the properties of the Fischer-Tropsch derived base oil as described in WO-A-02070629. The main reasons are the excellent low-temperature properties of said base oils in combination with the relatively simple process to make said base oils as compared to similar oils prepared from mineral crude sources.
[0006] Electrical oil formulations require certain properties in order to be applicable for use. Typical requirements are that sludge formation should be low, oxidation stability should be high, cold flow properties should be adequate for its intended use, flash point should be adequate for its intended use and the dielectric dissipation factor should remain low, even after prolonged testing at elevated temperature. In particular for applications that require high performance at elevated temperatures and wherein evelated peak temperature in the electrical oil formulation are occuring, a very high flash point is required. At the same time, the formulation should still have good low temperature performance.
[0007] US6214776 discloses an electric oil composition comprising a major amount of a paraffinic or naphthenic oil having a viscosity less than about 20 cSt at 40°C and a minor amount of an additive system including at least one hindered phenol antioxidant and an alkyl substituted benzotriazole diphenyl amine metal activator.
[0008] Applicants further found that formulating an electrical oil formulation starting from such a synthetic iso-paraffin base oil is not straightforward as compared to when starting from a mineral based paraffinic base oils. The object of the present invention is to provide an electrical oil formulation, which has adequate properties for its use. This object is achieved in the following oil formulation.

[0010] Figure 1 and 2 represent the carbon distribution of two Fischer-Tropsch derived base oils as used in the examples.

or by the formula (V)

R3 is a straight or branched C1-4 alkyl group.

[0037] Preferably R3 is methyl or ethyl and C is 1 or 2. R5 is a methylene or ethylene group. More preferably, R6 and R7 are hydrogen or the same or different straight or branched alkyl groups of 1-18 carbon atoms, preferably a branched alkyl group of 1-12 carbon atoms; R8 and R9 are the same or different alkyl groups of 3-15 carbon atoms, preferably of 4-9 carbon atoms.
[0038] Preferred compounds are 1-[bis(2-ethylhexyl)aminomethyl]benzotriazole, methylbenzotriazole, dimethylbenzotriazole, ethylbenzotriazole, ethylmethylbenzotriazole, diethylbenzotriazole and mixtures thereof. Examples of copper passivator additives as described above are described in US-A-5912212, EP-A-1054052 and in US-A-2002/0109127. These benzotriazoles compounds are preferred because they also act as an electrostatic discharge depressant, which is beneficial when the oil formulation is used as an electrical oil. Copper passivator additives as those described above are commercially available under the product names IRGAMET 39, IRGAMET30 and IRGAMET 38S from CIBA Ltd Basel Switzerland, also traded under the trade name Reomet by-CIBA.
[0039] The content of the above copper passivator in the oil formulation is preferably above 1 mg/kg and more preferably above 5 mg/kg. A practical upper limit may vary depending on the specific application of the oil formulation. For example, when desiring improved dielectric discharge tendencies of the oil for use as electrical oil it may be desired to add a high concentration of the copper passivator additive. This concentration may be up to 3 wt%. Applicants however found that the advantages of the invention can be achieved at concentrations below 1000 mg/kgw and more preferably below 300 mg/kg, even more preferably below 50 mg/kg.
[0040] It has been found that when between 1 and 1000 mg/kg of a sulphur or phosphorus containing additive is also part of the additive component (ii) the desired properties are even more enhanced. Preferred sulphur and phosphorus containing compounds are sulfides, phopshides, dithiophopsphates and dithiocarabamates. Preferably an organic polysulphide compound is used. With polysulphide is here meant that the organic compound comprises at least one group where two sulphide atoms are directly linked. A preferred polysulfide compound is a disulfide compound. Preferred polysulphide compounds are represented by the formula (I)

[0055] Starting with the naphthenic-1, mineral paraffin base oil-1 and the GTL base oil-1 of Table 1 five different oil mixtures according to the additivation schemes 1-8 of table 2 were made. For all of these oil mixtures the Sludge Formation was measured according to the Oxidation Test IEC 61125 C at 164h/120 °C. The lower the value the less sludge is found. The results are also presented in Table 2.
Table 2

[0056] For all of these oil mixtures according to additivation schemes 1-5 of above also the Total Acidity using the Oxidation Test IEC 61125 C at 164h/120 °C was measured. The lower the value the less acid compounds are formed and the more oxidative stable the oil formulation is. The results are presented in Table 3.
Table 3

[0057] 4 oil mixtures were prepared according to the scheme as presented in Table 4. Two oil mixtures were subjected to a clay treatment using Tonsil 411 clay as obtainable from Sued Chemie, Munchen (D). The anti-oxidant and copper passivator additives were added after the clay treatment. The properties of the oil mixtures were measured and the oil mixtures were subjected to the IEC OXIDATION TEST at 500h/120 °C.
Table 4
Table 4 shows that the oil formulation based on the Fischer-Tropsch derived base oil has a low viscosity at -30 °C in combination with excellent oxidative stability properties. The gassing tendency of the Mixture Z of Table 4 can be improved by adding an aromatic solvent as illustrated in Table 5.
Table 5

[0058] Three oil formulations A-C were made using the GTL Base Oils 1, 2 and 3 of Table 1 according to the formulations as listed in Table 6. The oil formulations A-C were subjected to a clay treatment using Tonsil 411 clay as obtainable from Sued Chemie, Munchen (D). The anti-oxidant and copper passivator additive were added after the clay treatment.
[0059] The oils were tested with the test methods listed in Table 6. The results show that excellent oils for use as electrical oils.
Table 6 (Oils B, C comparative)

[0060] Four oil mixtures were tested for their biodegradability according to ISO 14593. The results are presented in Table 7. From Table 7 it can be seen that a biodegradable base oil or base oil mixture for use in a transformer oil according to IEC 60296 specification is provided. Oil formulations using exclusively the ester base oil did not meet the kinematic viscosity at 40 °C specification.
[0061] This is advantageous because as a rule ester base oils are more difficult to prepare, and hence expensive, than the Fischer-Tropsch derived base oils.
Table 7 (all comparative)

1. Electrical oil formulation comprising a base oil component and an additive, wherein

(i) the base oil component is a paraffinic base oil obtained by hydroisomerisation of a Fischer-Tropsch derived wax, followed by dewaxing, the paraffinic base oil having a paraffin content of greater than 80 wt% paraffins and a saturates content of greater than 98 wt% and comprising a series of iso-paraffins having n, n+1, n+2, n+3 and n+4 carbon atoms and wherein n is between 20 and 35 measured as set out in the description; wherein the paraffin base oil has a kinematic viscosity at 40°C of between 1 and 15 mm2/sec and a pour point of below -30°C; and

or by the formula (V) 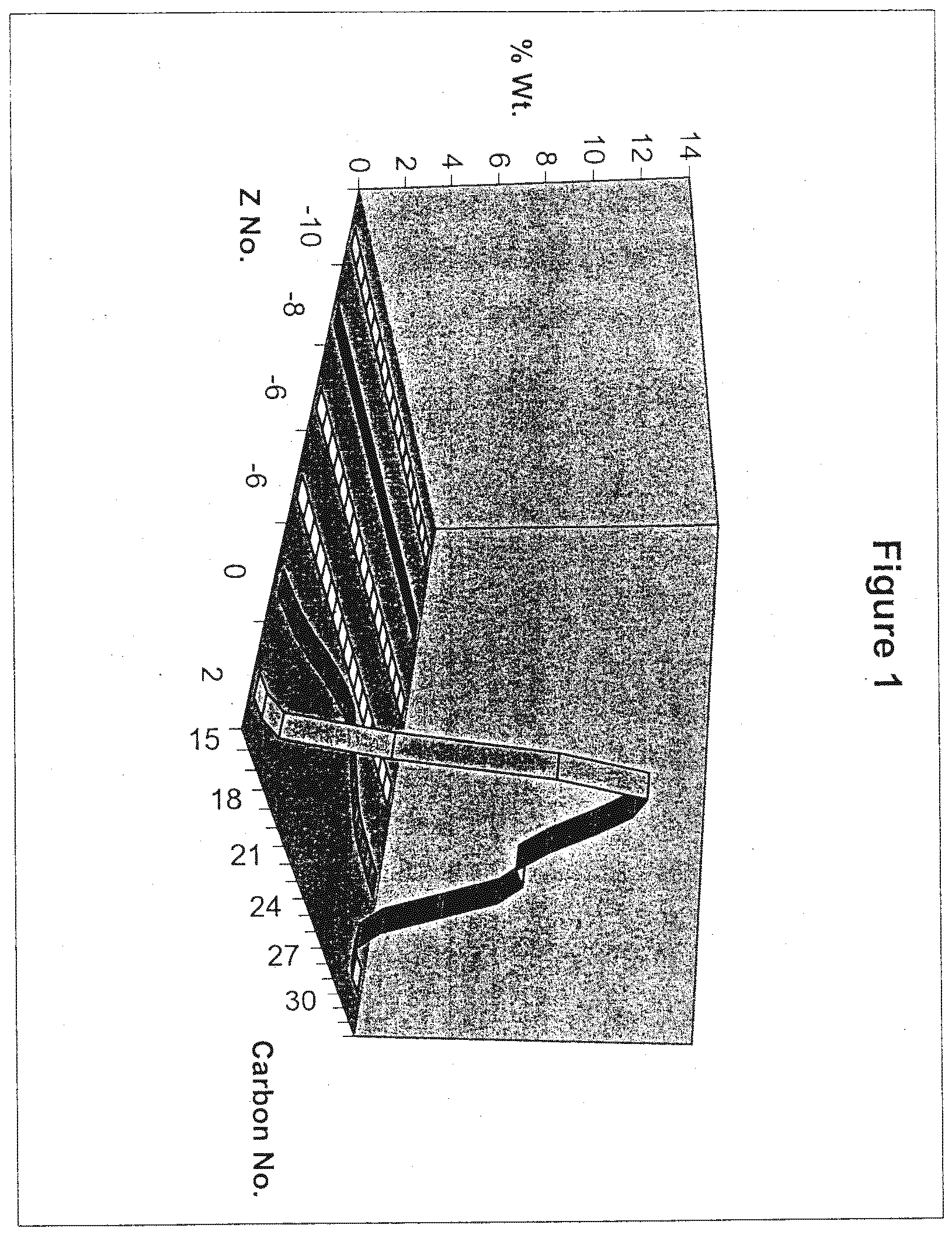 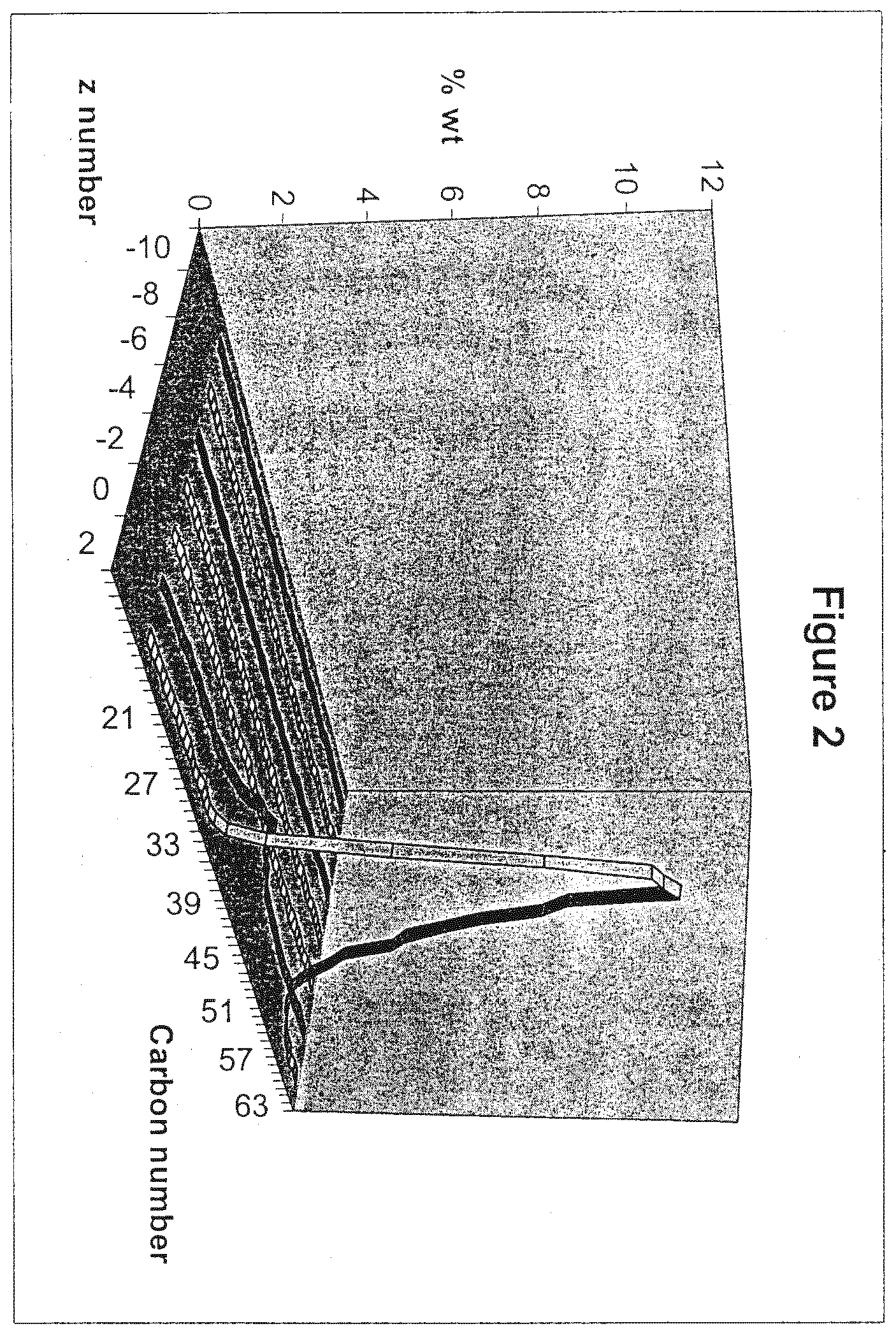