[0001] Energy of building complexes is often supplied by local utility plant, which converts energy from public resources to utilities needed in the building complex. Economically optimal scheduling of such a utility plant or a microgrid (from now on 'controlled plants') operation with complex internal structure consists in determination of set points of plant energy conversion devices, so that energy demands of the building complex are satisfied and plant operating costs are minimal. The solution is usually applied in fixed intervals usually 15 minutes to 60 minutes long, where the energy demands and the conversion characteristics are considered fixed.
[0002] In reality energy demand varies within these periods and there has to be a lower level controller that strives to balance energy supply and demand and ensures satisfactory operation of the whole system. The balances are of two types - hard balance that must be always satisfied (e.g. electricity supply and demand) and soft balance, which may be temporarily violated, such as heat delivery to building heating system may be less than needed for some time. The utility plant structures may be complex, and therefore, allocation of required production changes to cover demand changes can be complex.
[0003] Currently a fixed sequence of switching on and off energy producing devices is used to reach the balance when the demand significantly changes. For example, a first boiler in a set of boilers is first set to reach balance. If the first boiler in the set reaches its maximum allowed heat output and balance is not reached, a next boiler is switched on and changed, followed by the next in the list, until balance is finally reached.
[0004] US2012/0010757 discloses an energy management system using and expert engine and a numerical solver to determine an optimal manner of using and controlling various energy consumption, producing and storage equipment in a plant to reduce energy costs.

FIG. 1A is a block diagram illustrating a simple example of a controlled utility plant schema with an optimizing controller shown as operating in a scheduling mode according to an example embodiment.

FIG. 1B is a block diagram illustrating a simple example of a controlled utility plant schema with an optimizing controller shown as operating in a feedback mode according to an example embodiment.

FIG. 2 is a flowchart illustrating a method implemented by the optimizer for scheduling devices in the utility plant according to an example embodiment.

FIG. 3 is a flowchart illustrating operation of the optimizer according to an example embodiment.

FIG. 4 is a flowchart illustrating operation of the optimizer providing a relaxed task optimization according to an example embodiment.

FIG. 5 is an illustration of an optimizer problem formulation in mathematical equation form according to an example embodiment.

FIG. 6 is an illustration of a relaxed optimizer problem formulation in mathematical equation form according to an example embodiment.

FIG. 7 is a flowchart illustrating an example optimizer operation while responding to a transient change in demand according to an example embodiment.

FIG. 8 is a chart illustrating demand and boiler output with operating costs in accordance with the example of FIG. 7.

FIG. 9 is a bar chart representation of heat output of boilers according to the example of FIG. 7.

FIG. 10 is a graph illustrating fuel costs of boiler operation in accordance with the example of FIG. 7.

FIG. 11 is a block diagram of a computer system for implementing the optimizing controller and methods according to example embodiments.

R - requiredIn a relaxed problem formulation illustrated as equations 600 in FIG. 6, the task objective is to minimize total costs of energy from public resources as illustrated at 610. At 615, the cost of k-th energy from public resources in t-th interval is shown. At 620 an imported/exported energy in t-th interval is represented. Inequality constraints on capacity of public resources are shown at 625. A function evaluation of primary energy consumption t-th interval from set points of all devices is represented at 630. 635 represents a vector of changes of building energy demand evaluated by the lower level controller to ensure required conditions. A vector of new energy demands considered as an additional variable is shown at 640. Capacity inequality constraints of j-th conversion device are shown at 645. An inequality constraint on rate of power output change of j-th device in t-th interval is illustrated at 650.

[0067] The problem variables are Pj, which is the power output setpoints of device determine the total consumption of k-th energy of the plant. DRvar is the attainable energy delivery satisfying the possible energy demands as close as possible.
[0068] Variables include:

1. A computer implemented method of optimizing operation of a utility plant (120) having multiple devices (140, 142, 144, 146, 148) to convert input energy into output energy for a building, the method comprising:

in a scheduling mode:

receiving a forecast (135) of energy demand for the building;

receiving a forecast of factors (185) that will influence the building energy demand and the operation of the utility plant (120), including weather conditions (185), building temperature set point and building occupancy;

operating an optimizer controller (110) in a feedforward mode to determine future scheduling intervals specifying which of the devices (140, 142, 144, 146, 148) should be on and to provide control actions to specify a set point for each device (140, 142, 144, 146, 148) that is on from the forecast of the energy demand and the forecast of the factors so that the operation of the utility plant is economically optimal and no constraint is violated; and

obtain current values (330) of the factors that influence the building energy demand and the operation of the utility plant (120) including weather conditions (185), building temperature set point and building occupancy;

determine a new building energy demand (330) of the building expected to decrease the difference; and

operating the optimizer controller (110) in a feedback mode to update current set points (340) for the multiple devices using a utility plant model (170) with regards to operation costs that: satisfy the new building energy demand, take into account response times of the devices and their capacities, and minimize utility plant (120) purchased energy cost (175).

2. The computer implemented method of claim 1, further comprising for each control interval where no update of current set points are found (345):

modify an optimization objective by adding a member representing weighted energy imbalance (410, 430) which is a difference between a desired demand and energy available; and

accept a result as the best possible step in the direction of eliminating the difference between the desired and measured in-building condition (435, 500).

3. The computer implemented method of claim 1 or claim 2, wherein the update to current set points for the multiple devices (140, 142, 144, 146, 148) are set to minimize the difference between the desired and the measured in-building condition for the building and modified to minimize cost (415, 435) in later control intervals.

4. The computer implemented method of claim 3, wherein the difference is minimized as a function of weighted difference between the desired and measured in-building condition (415, 435).

6. The method of claim 1, wherein device set points are determined to minimize cost of energy from public resources (C) in accordance with

(510), where k is the index of public energy sources in the t-th control interval.

7. The computer implemented method of claim 1, further comprising:
if the desired in-building condition cannot be achieved in a specified number of control intervals (450):
changing a configuration (315) of the devices (140, 142, 144, 146, 148) operating in the utility plant (120) by entering the scheduling mode to:

receive a forecast of factors (185) influencing the operation of the utility plant (120), including weather conditions (185), building temperature set point and building occupancy; and 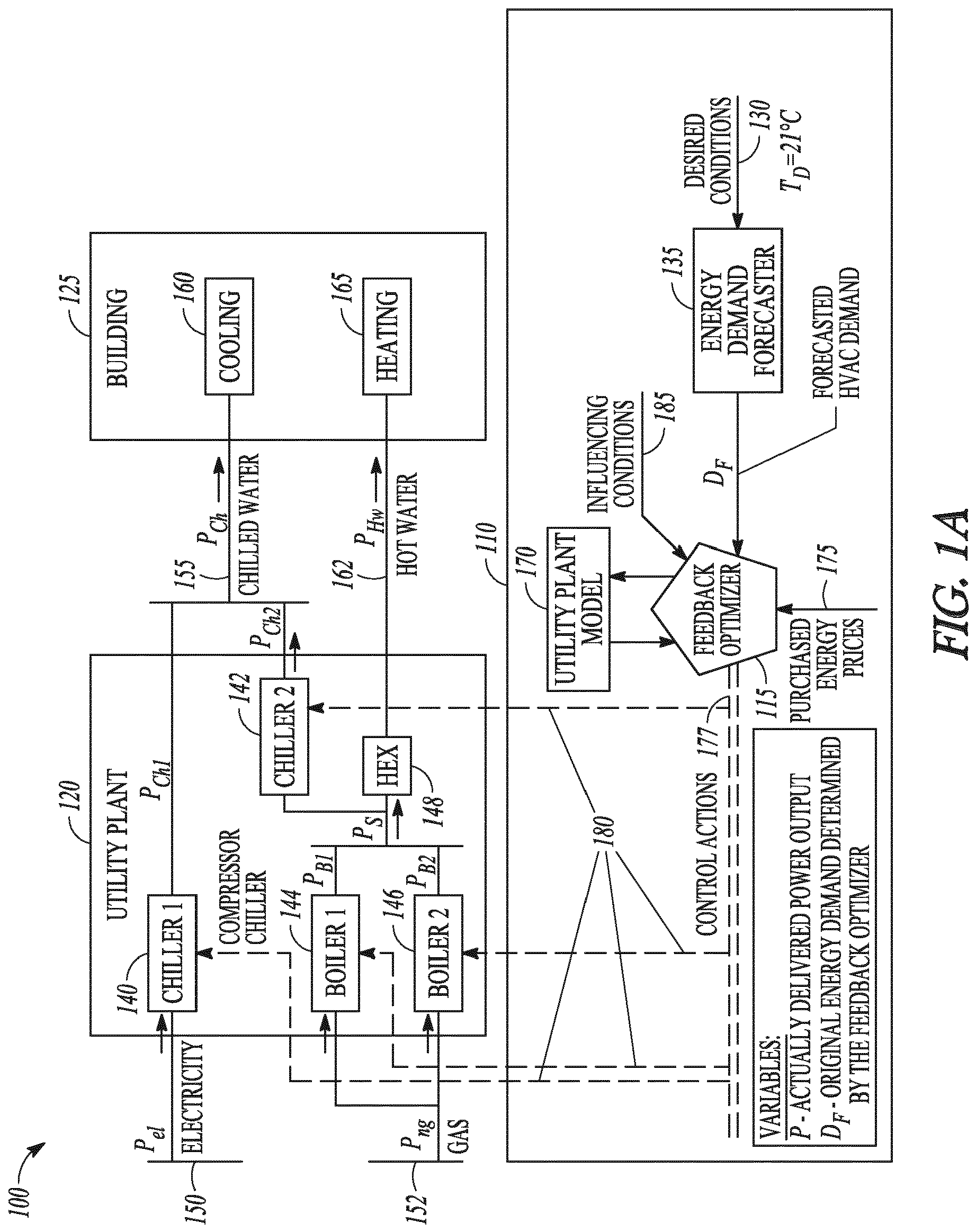 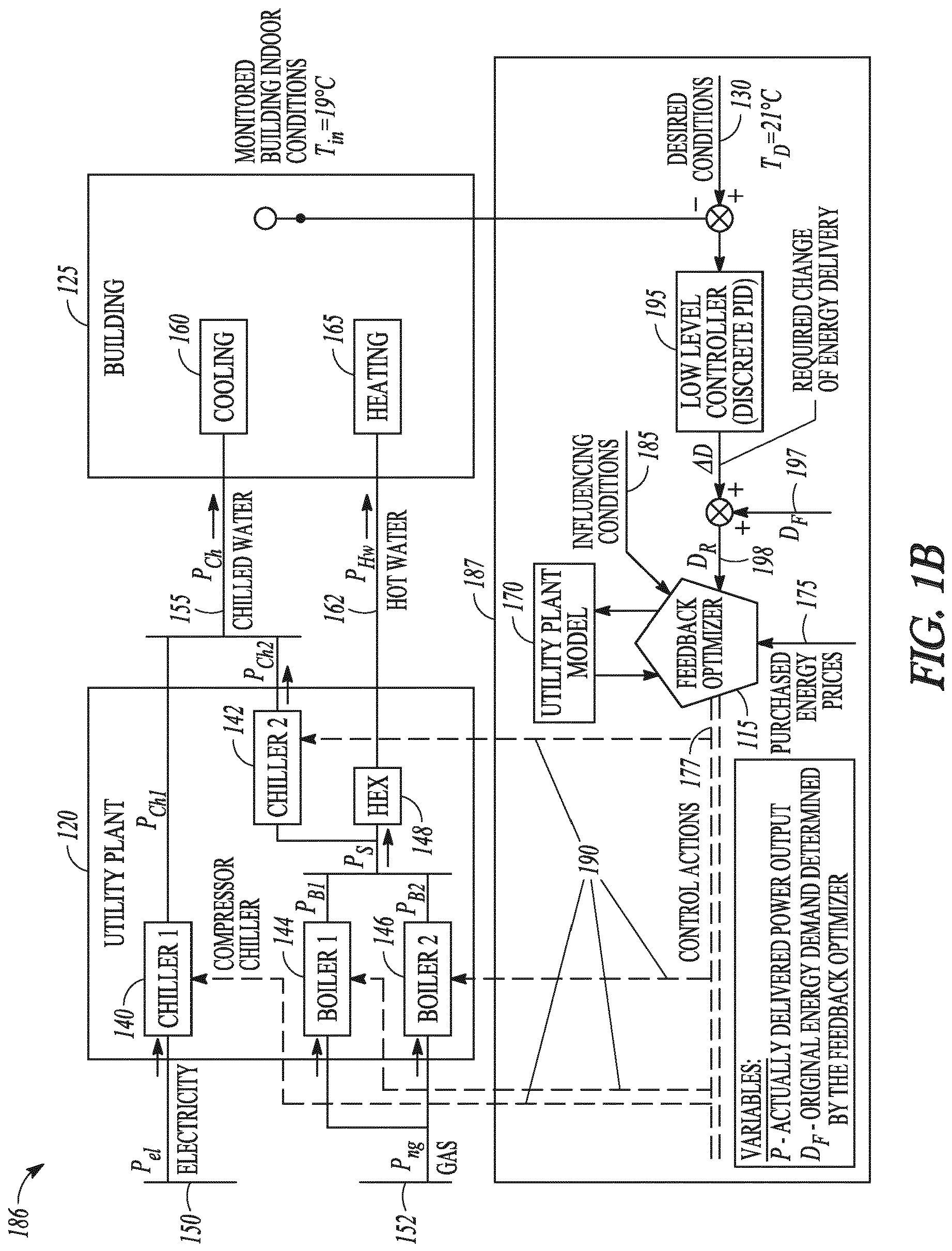 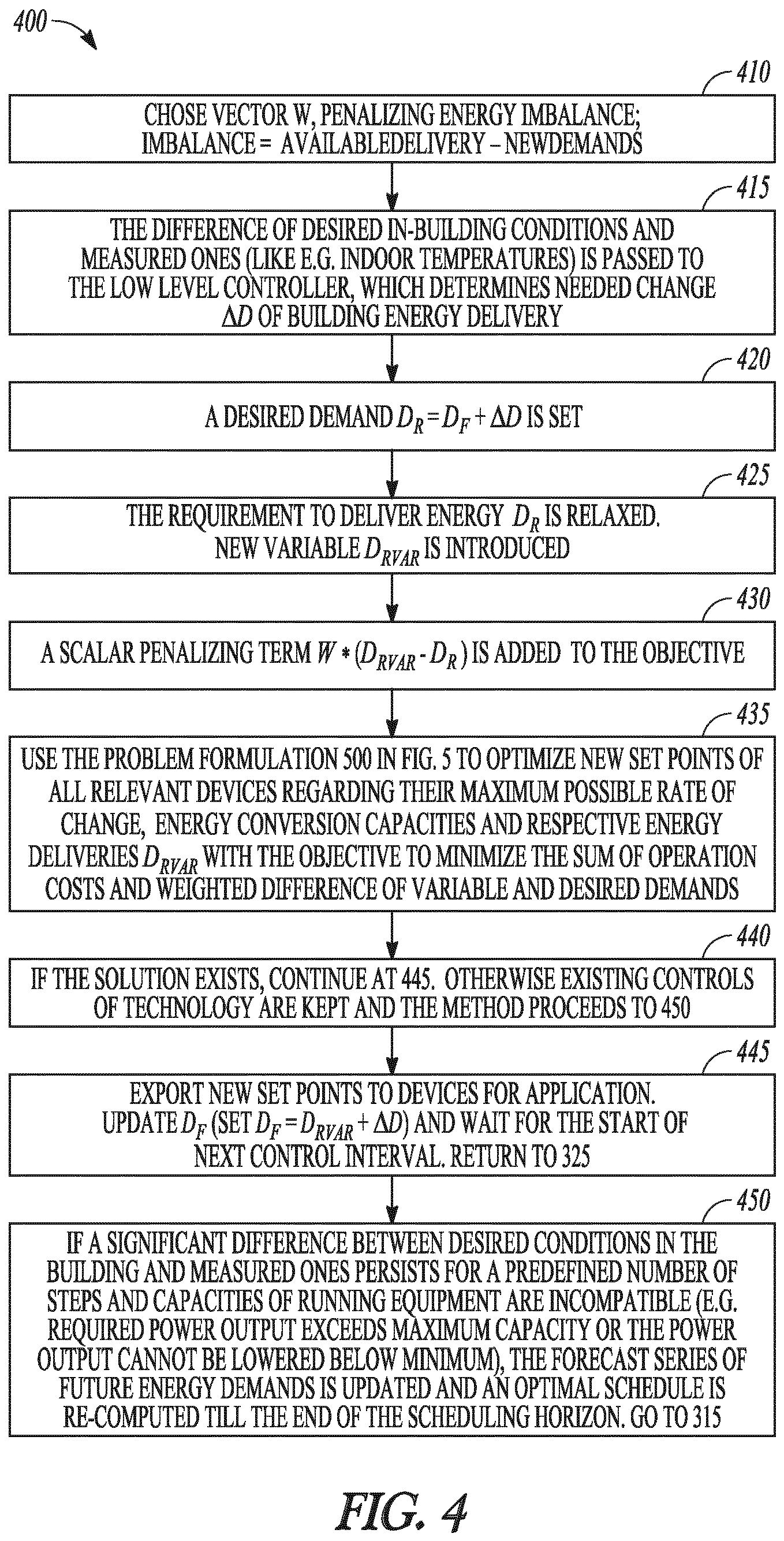 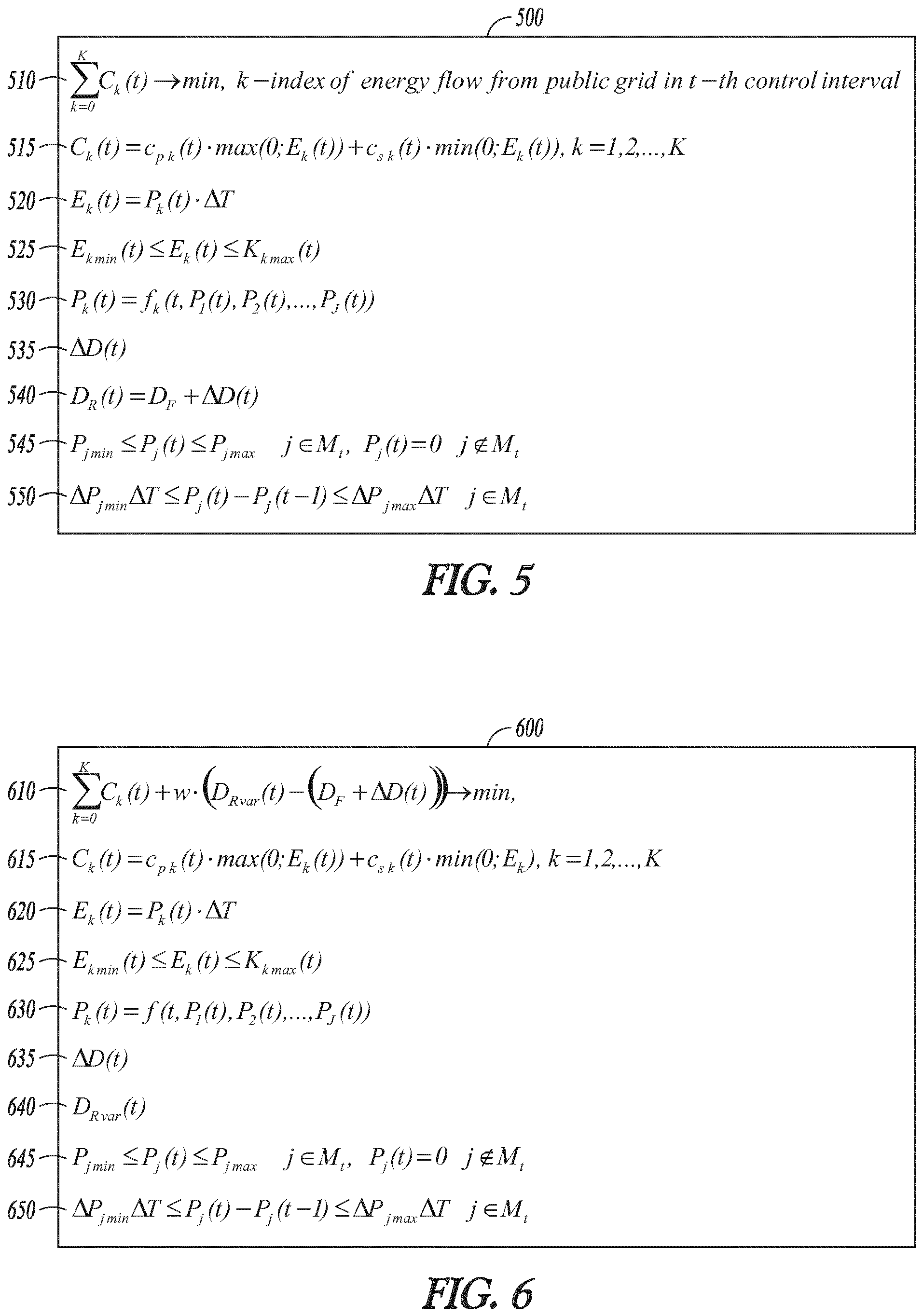 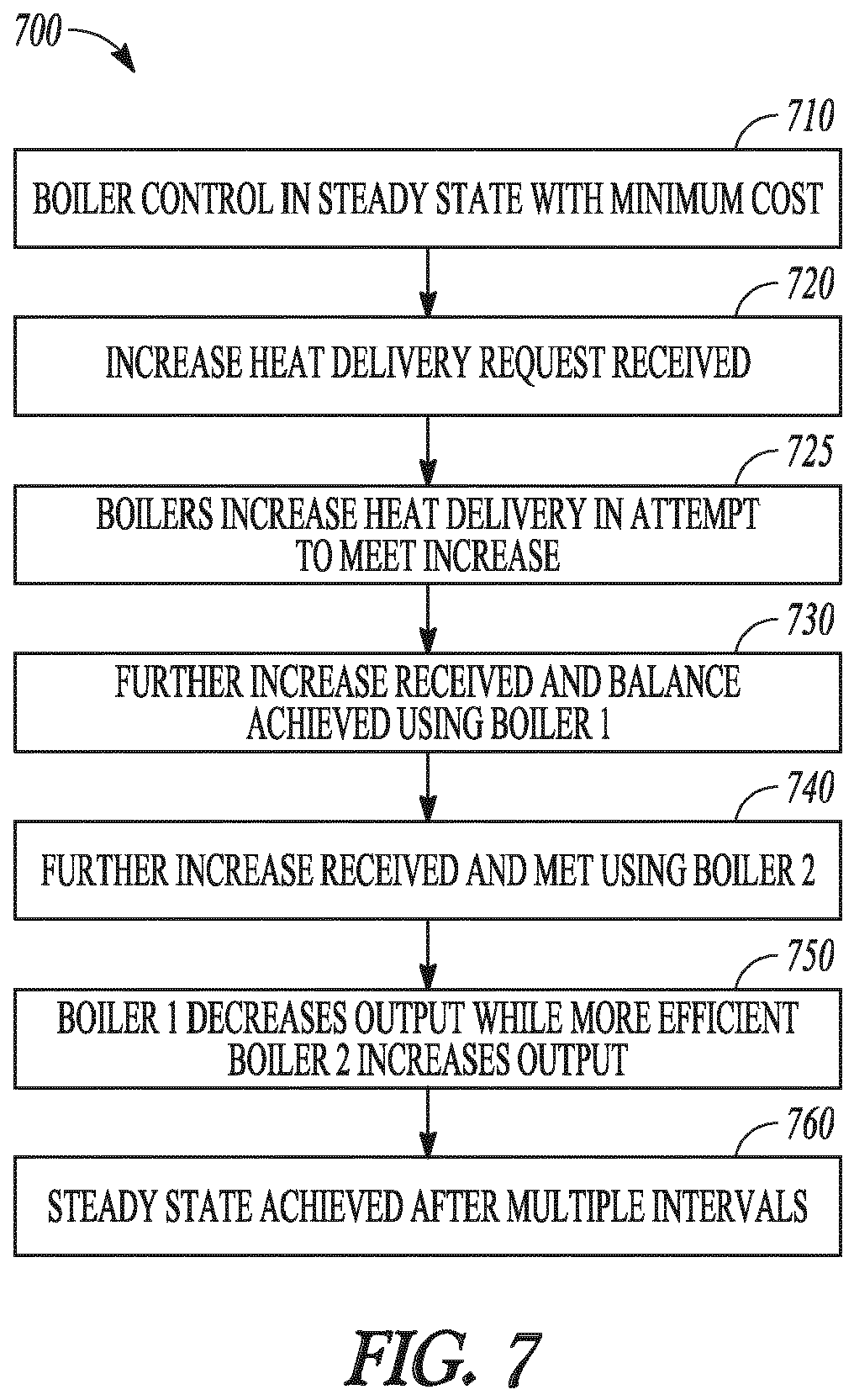 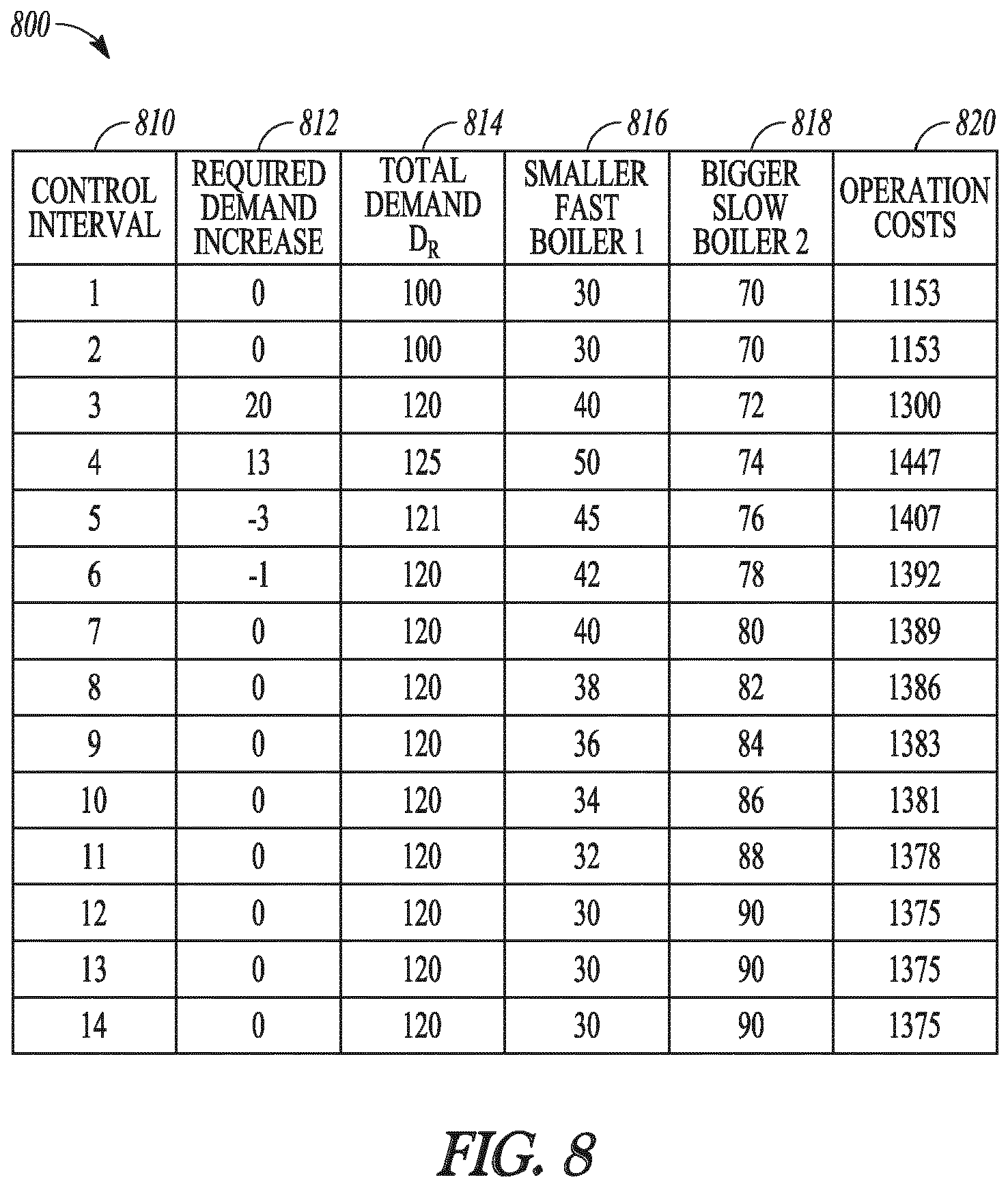 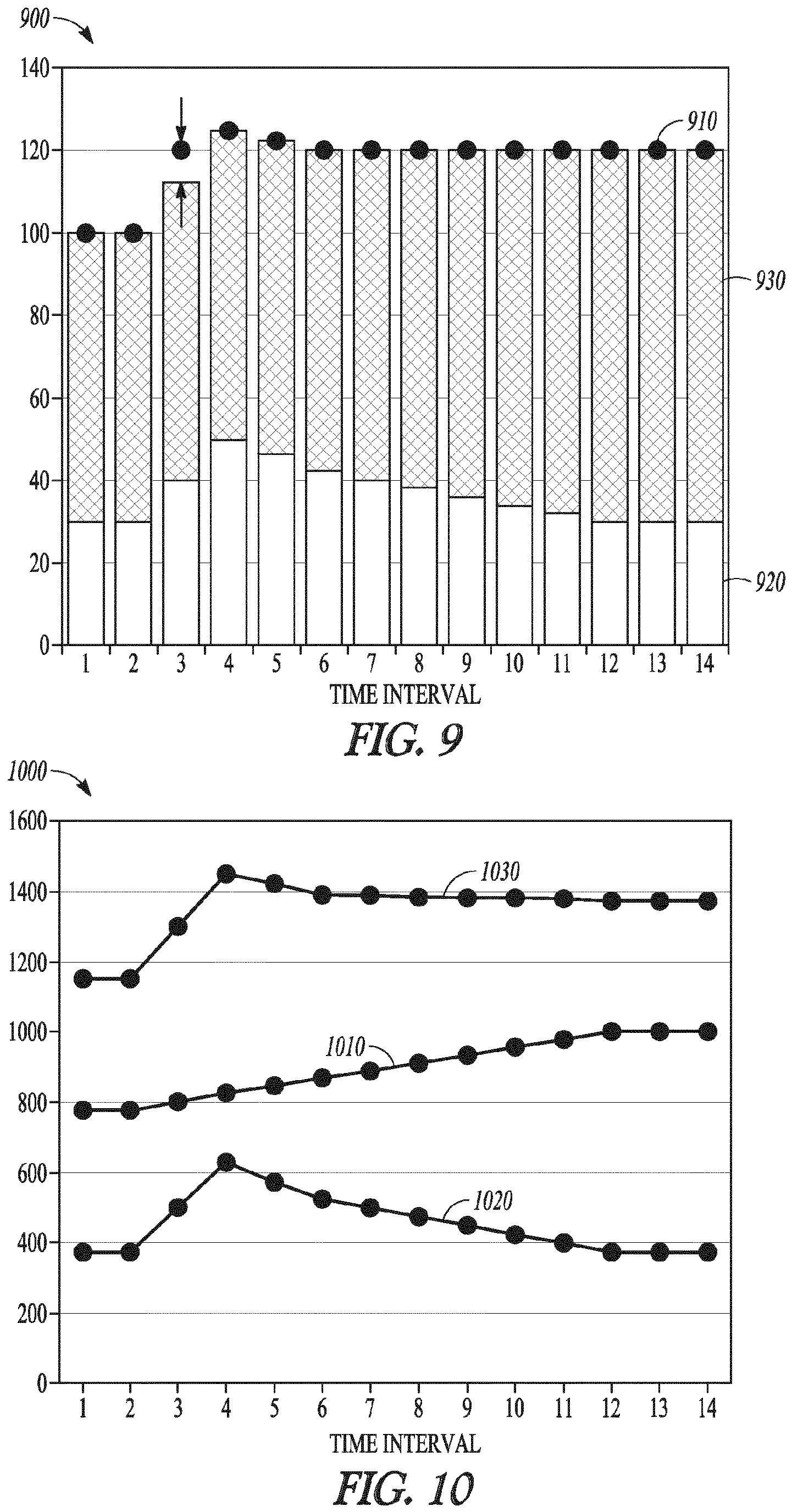 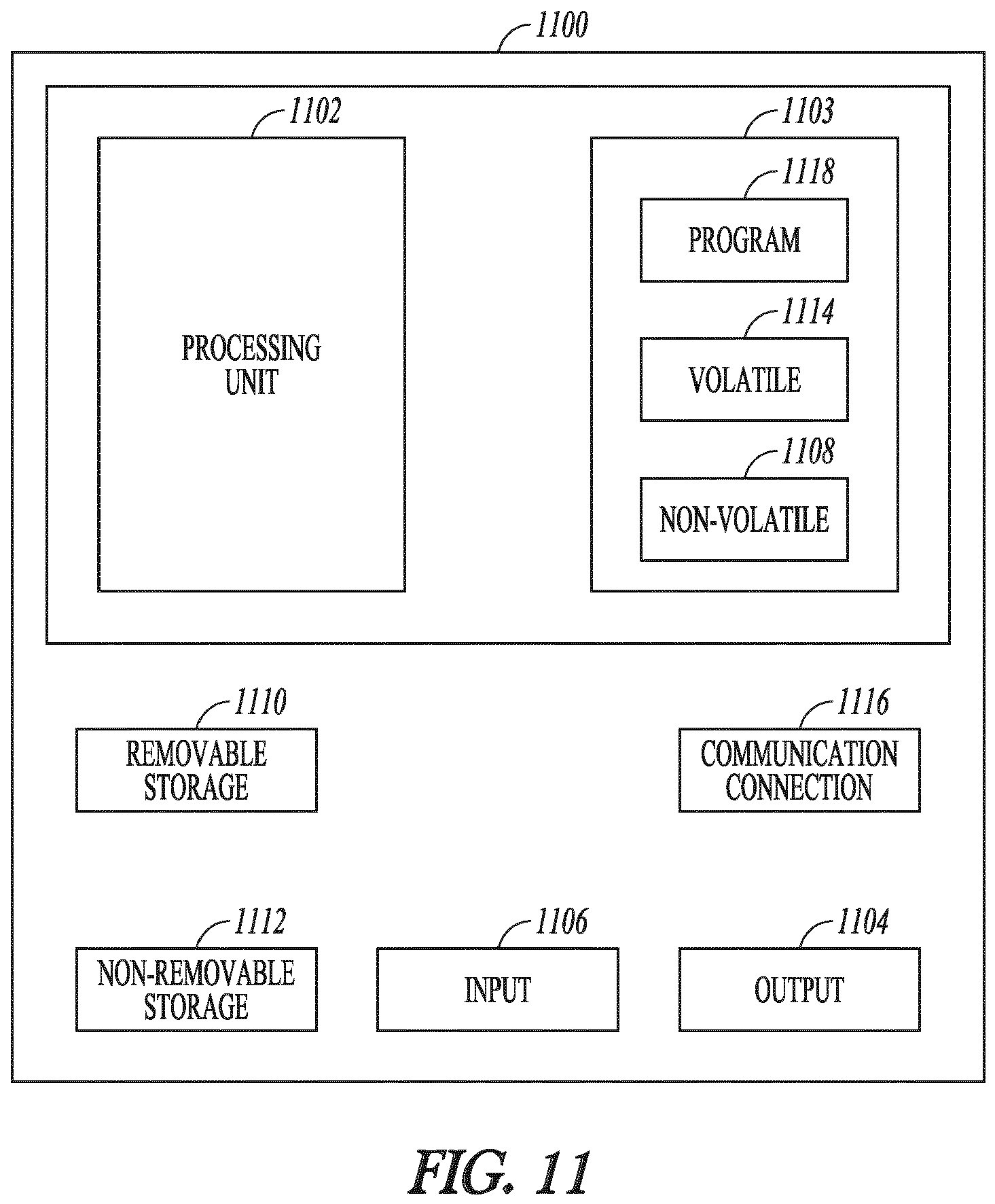