[0001] The present disclosure relates to coating materials and, more particularly, to chromizing slurry coating compositions for protection of a metal substrate.
[0002] Gas turbine engines typically include a compressor section to pressurize airflow, a combustor section to burn a hydrocarbon fuel in the presence of the pressurized air, and a turbine section to extract energy from the resultant combustion gases. Gas path components, such as turbine blades, often include airfoil cooling that may be accomplished by external film cooling, internal air impingement and forced convection either separately, or in combination.
[0003] The internal cavities include internal passages to direct the passage of the cooling air. As gas turbine temperatures have increased, the geometries of these cooling passages have become progressively more circuitous and complex. Such internal passages are often coated with a metallic coating such as via a diffusion chromizing process to prevent hot corrosion thereof. Components to be coated are typically placed in a retort for distillation, Cr-containing vapor species are generated and supplied to the components via gas phase transport, and a Cr-rich coating is formed. Although effective, the vapor phase chromizing process may suffer from an inability to achieve sufficient coverage and Cr content on some components, particular the complex internal passageway of relatively small first stage High Pressure Turbine (HPT) blades.
[0004] US 2004/115355A1 relates to the application of an aluminium-containing coating to a surface. EP 2060653 A2 relates to processes and compositions for forming diffusion coatings. EP 2371986 A1 relates to a process of applying a thermal and oxidative resistent coating. EP 0984074 A1 relates to the field of corrosion protection for metal substrates. US2014/004372 relates to Cr-powder slurries with CrC13, organic binders and fillers.

Figure 1 is a schematic cross-section of an example gas turbine engine architecture;

Figure 2 is an enlarged schematic cross-section of an engine turbine section;

Figure 3 is a perspective view of an airfoil as an example component for use with a coating method showing the internal architecture;

Figure 4 is a block diagram representing a method of coating an array of internal passageways of a component; and

Figure 5 is a block diagram representing a method of coating a component.

1. A method of coating, comprising:

applying a metallic coating slurry without a filler to a component;

drying the metallic coating slurry to drive off an organic binder; and

applying a or the chromium slurry to an array of internal passageways (110) within the component; and

cathodic arc depositing a bondcoat to an external surface of the component.

9. The method as recited in claim 8, further comprising applying a TBC atop the bondcoat. 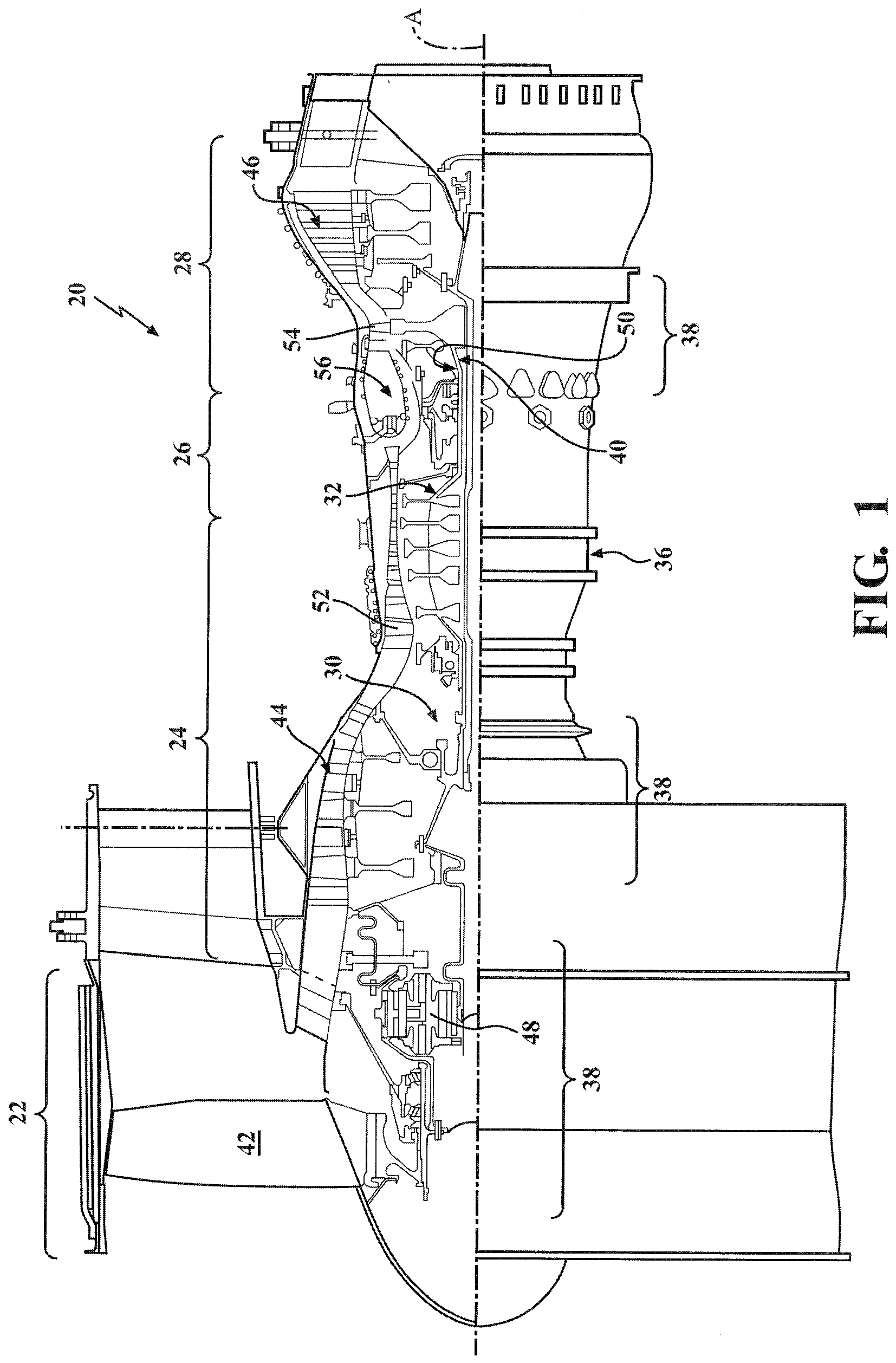 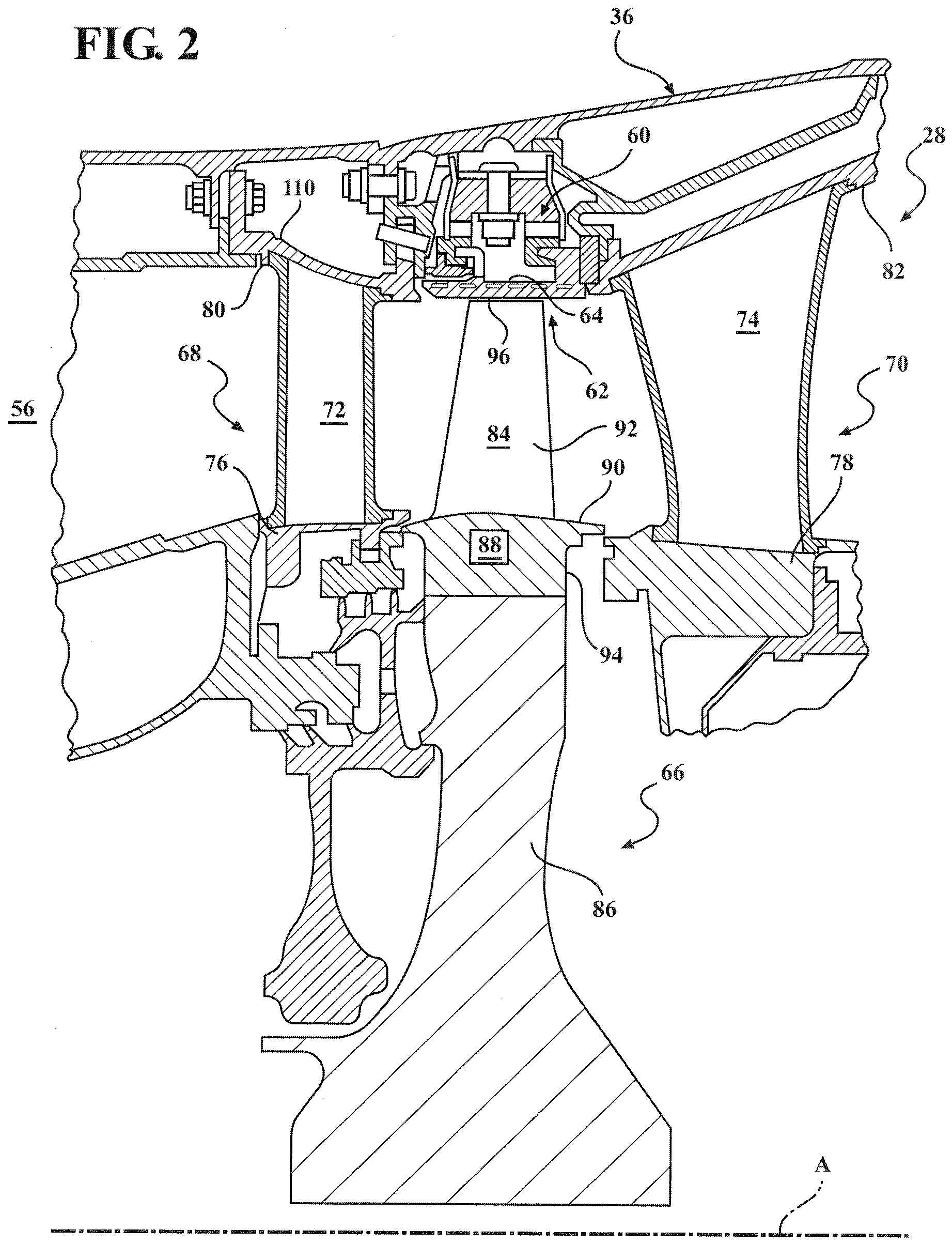 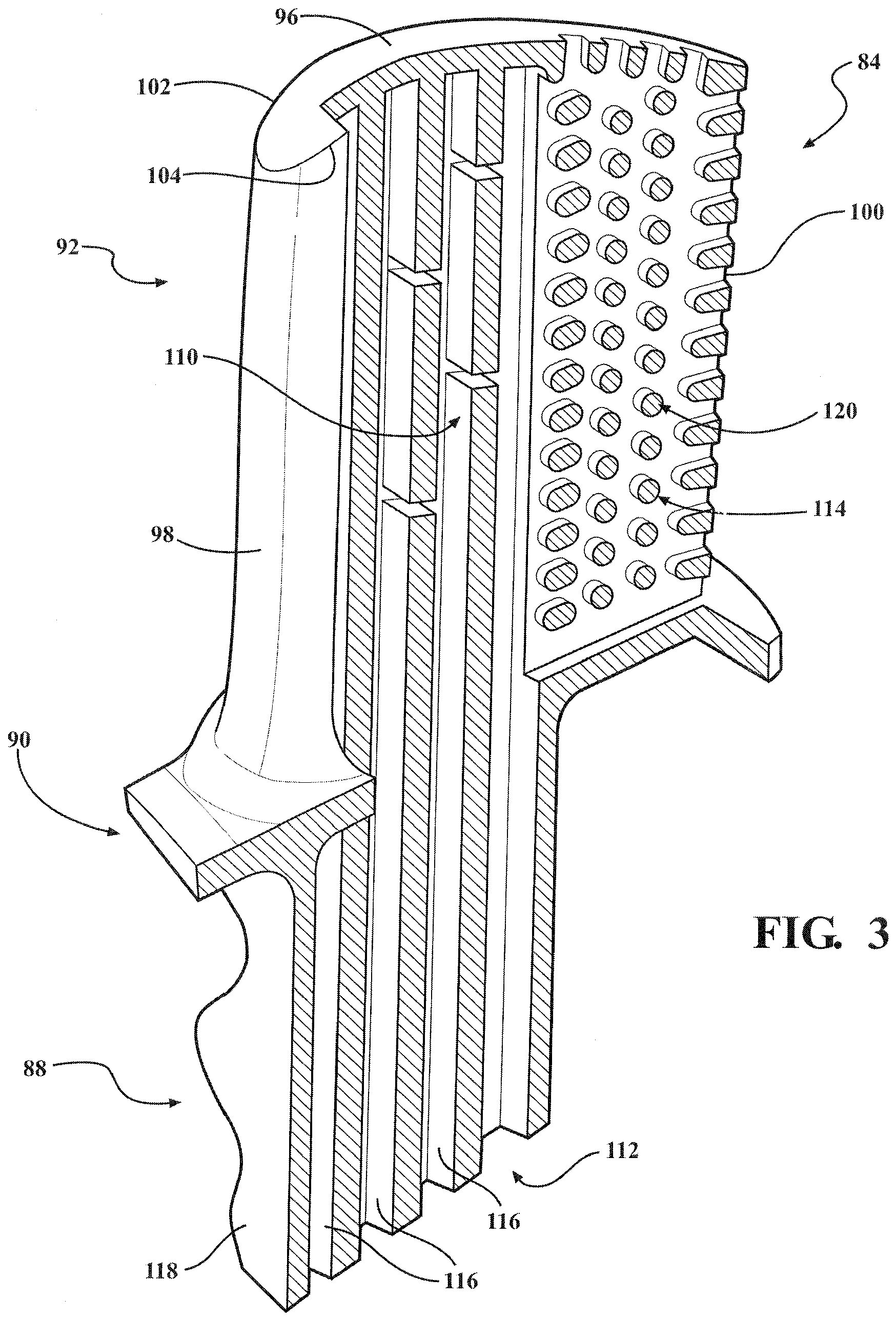 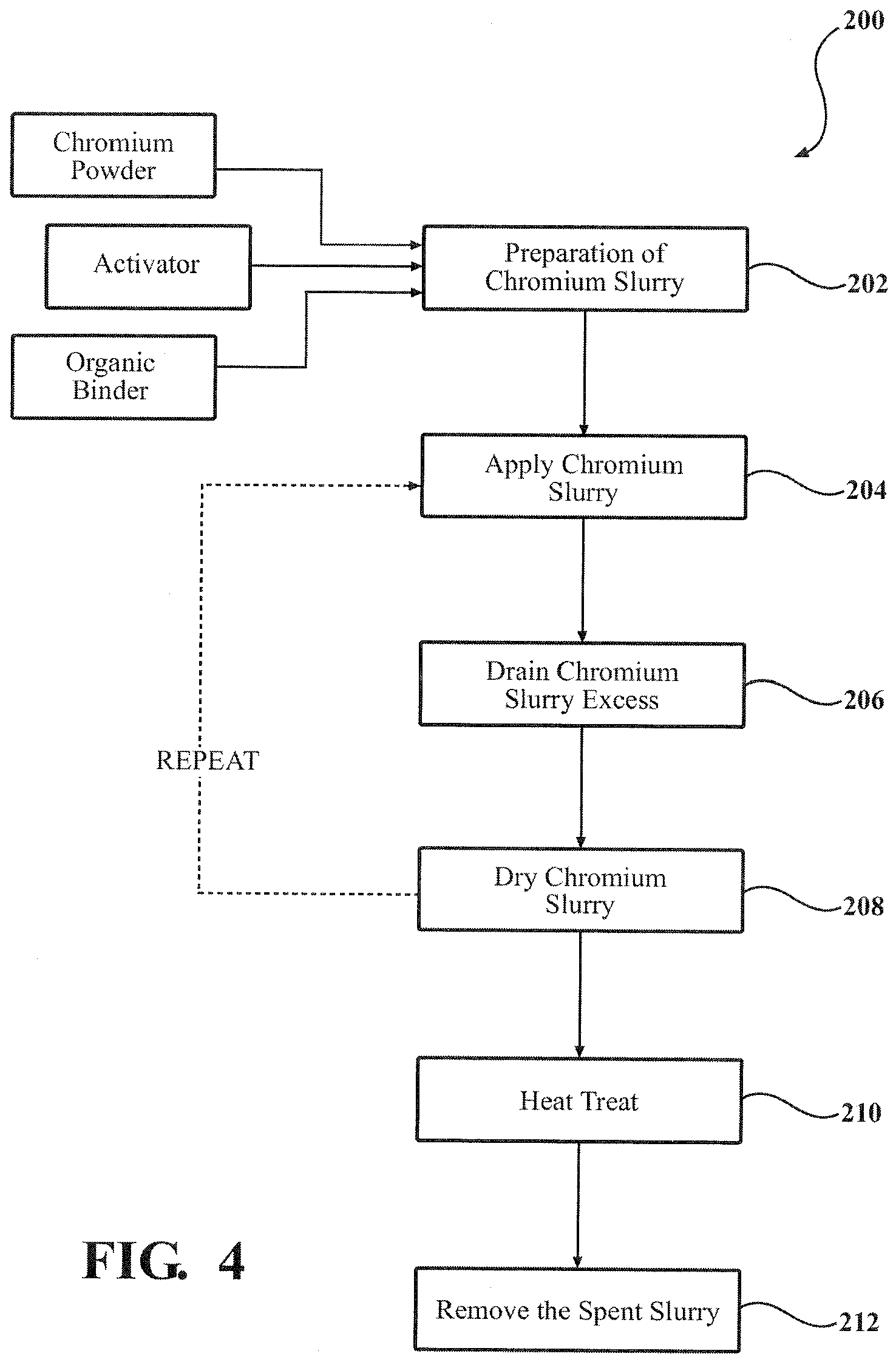 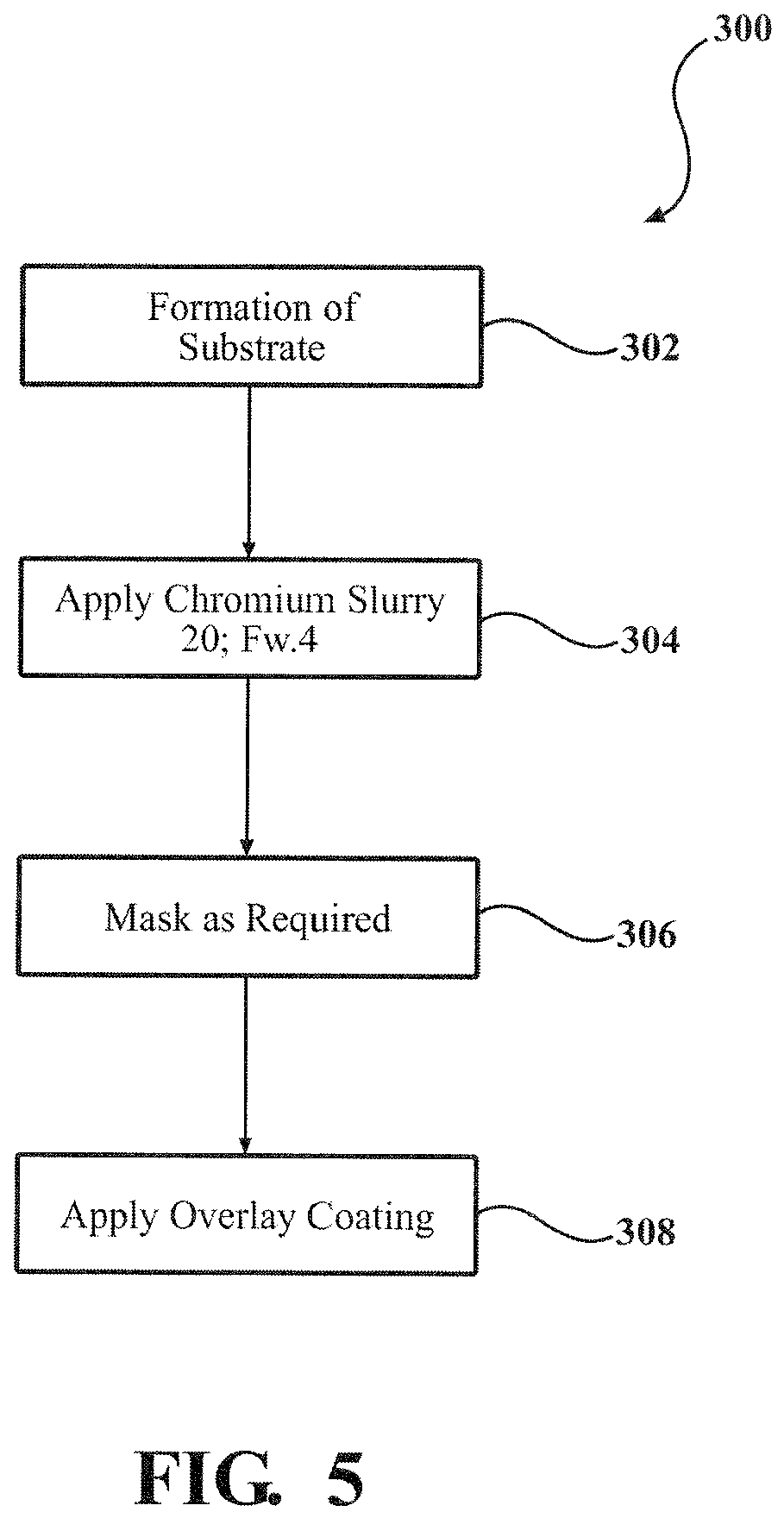