[0001] The invention relates to optical telecommunication components that provide for adjustable optical connections to transducers through dispersive elements.

[0002] As telecommunication bandwidths increase, there is a strong demand for low power consumption, low cost, high bandwidth transmitters and receivers. To increase bandwidths of optical transmissions between two points, wavelength division multiplexing (WDM) can be used in which information is carried on different channels, e.g., N channels, each at a unique wavelength. Adjacent points can be, for example, many kilometers away from each other. The channels can be arranged on a wavelength grid, e.g., with uniform spacing in wavelength or frequency, such that the spectral content in each channel does not interfere with adjacent channels. Also, an increase in bandwidth can be achieved using modulation at higher data rates. Generally, current technology involves WDM of 4 to 100 channels and data rates of 2.5 gigabits/second (G), 10 G, 25G or 40G, although it is expected that these values of channel number and modulation rates will evolve over time.
[0003] Nodes along a communication network can involve transmitters and or receivers to interface appropriately with the optical communication signals. Optical fibers with multiplexed optical signals generally are used to connect remote points on the network. If the optical channels are on a wavelength grid or frequency grid, the synchronization of the wavelengths can be expensive and can dissipate considerable power, e.g., to maintain temperature control. Precise control of device production and operating conditions is typically needed with communication systems involving narrowly spaced wavelength channels to align channel wavelengths with the narrow, passbands of multiplexors/demultiplexors.

Fig. 1 is a schematic layout of a transmitter with adjustable grid tracking.

Fig. 2 is a schematic layout of a receiver with adjustable grid tracking.

Fig. 3 is a schematic layout of a transmitter interfaced with a remote receiver within an optical telecommunication network, in which transmitter and receiver have adjustable grid tracking.

Fig. 4 is a top plan view of an embodiment of a transmitter or receiver with adjustable grid tracking.

Fig. 5A is a top plan view of a De/Mux device with adjustable grid tracking in which the adjustable mirror redirects a chromatically dispersed signal.

Fig. 5B is a siele view of the De/Mux device of Fig. 5A viewed along line B.

Fig. 5C is a side view of the De/Mux device of Fig. 5A viewed along line C.

Fig. 6 is a top plan view of a De/Mux with grid tracking based upon a planar echelle grating.

Fig. 7A is a top plan view of an alternative De/Mux device based upon a planar echelle grating.

Fig. 7B is a side view of the dispersive element of the De/MUX device of Fig. 7A.

Fig. 7C is a side view of the planar waveguide structure of the De/MUX device of Fig. 7A.

Fig. 8 is a top plan fragmentary view of a planar beam steering element integrated into a planar structure incorporating an AWG.

Fig. 9 is a set of plots of measured output from four source channels (1-4) as a function of wavelength and angle of beam steering element with lower panels of plots corresponding to slight rotations of the adjustable mirror with a corresponding shift in the wavelength transmission.

Fig. 10 is a plot of transmission power as a function of wavelength for a band of four independent optical signals spaced apart by 20 nm.

Fig. 12 is a top plan view of an embodiment of a transmitter based on an array of VCSEL light sources, a planar AWG and a free space beam steering element.

- an input line for coupling to a received optical signal;

a plurality of light emitting elements that emit optical signals chromatically spaced from each other;

an adjustable beam steering element (106) optically connected to the first interface or to the conjugate spatially-extended second interface,

i) transmitting output from a plurality of lasers (802) through a multiplexing device to form a spectrally combined optical signal, wherein the output of each laser corresponds to an independent data signal;

ii) transmitting the spectrally-combined optical signal over an optical fiber (172); and

wherein the multiplexing device, the receiver (120) or both comprise a beam steering element (106), and wherein the beam steering element (106) is automatically adjusted by a controller to maintain a signal intensity at the plurality of light receiving elements (122) representative of the independent data signals, wherein the optical fiber (172) connects remote locations.
13. The method of claim 12 wherein the receiving is performed for an optical receiver (120) using the optical telecommunications receiver (120) of any one of claims 1 to 6 or the transmitting is performed for an optical transmitter (100) using the optical telecommunications transmitter (100) of any one of claims 7 to 11.
14. The method of claim 12 or 13 wherein the lasers (802) comprise vertical cavity surface emitting lasers (802) or distributed feedback lasers (802), wherein the multiplexing device comprises an AWG, and optionally wherein another beam steering element (106) is located between the AWG and the optical fiber (172). 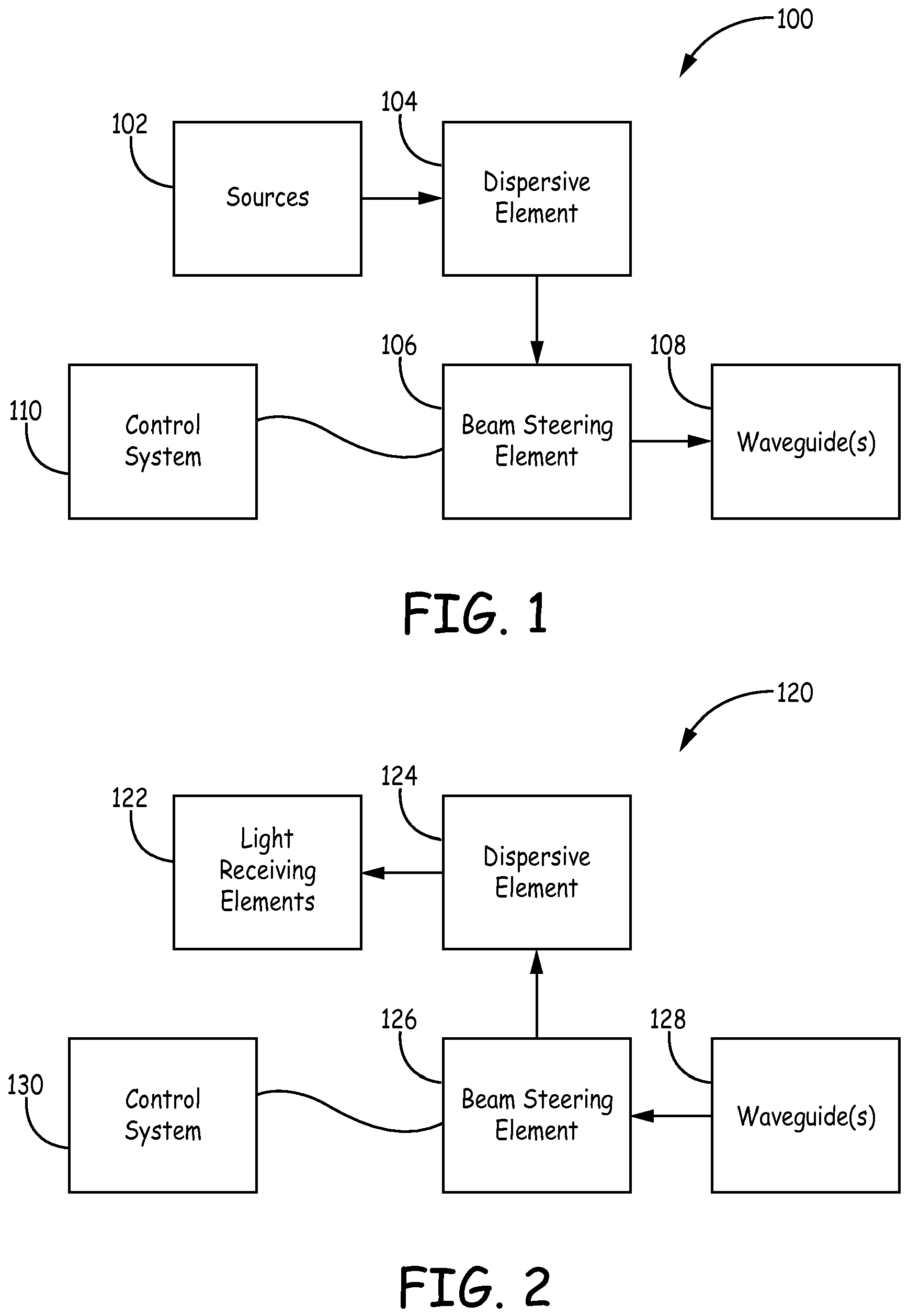 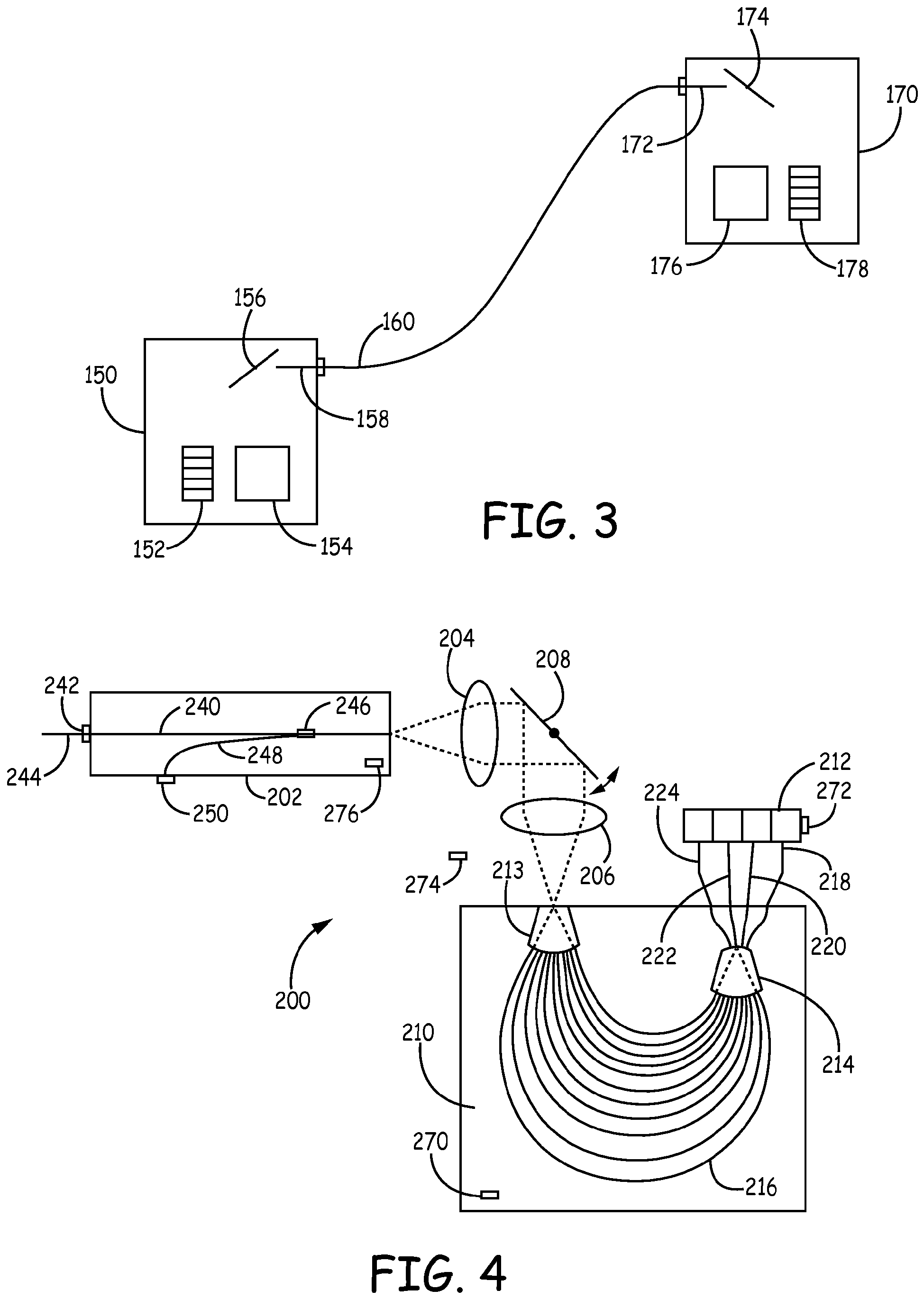 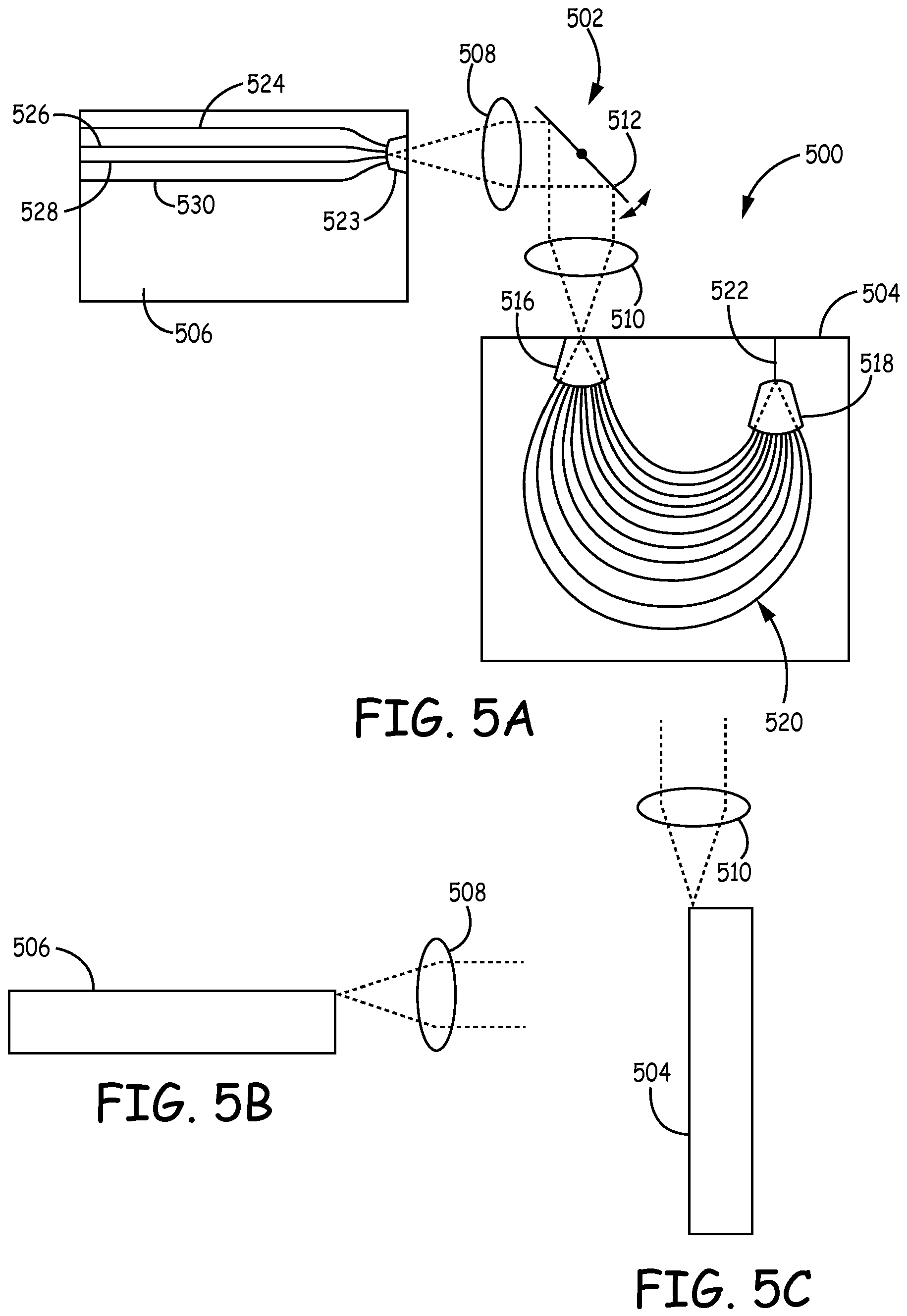 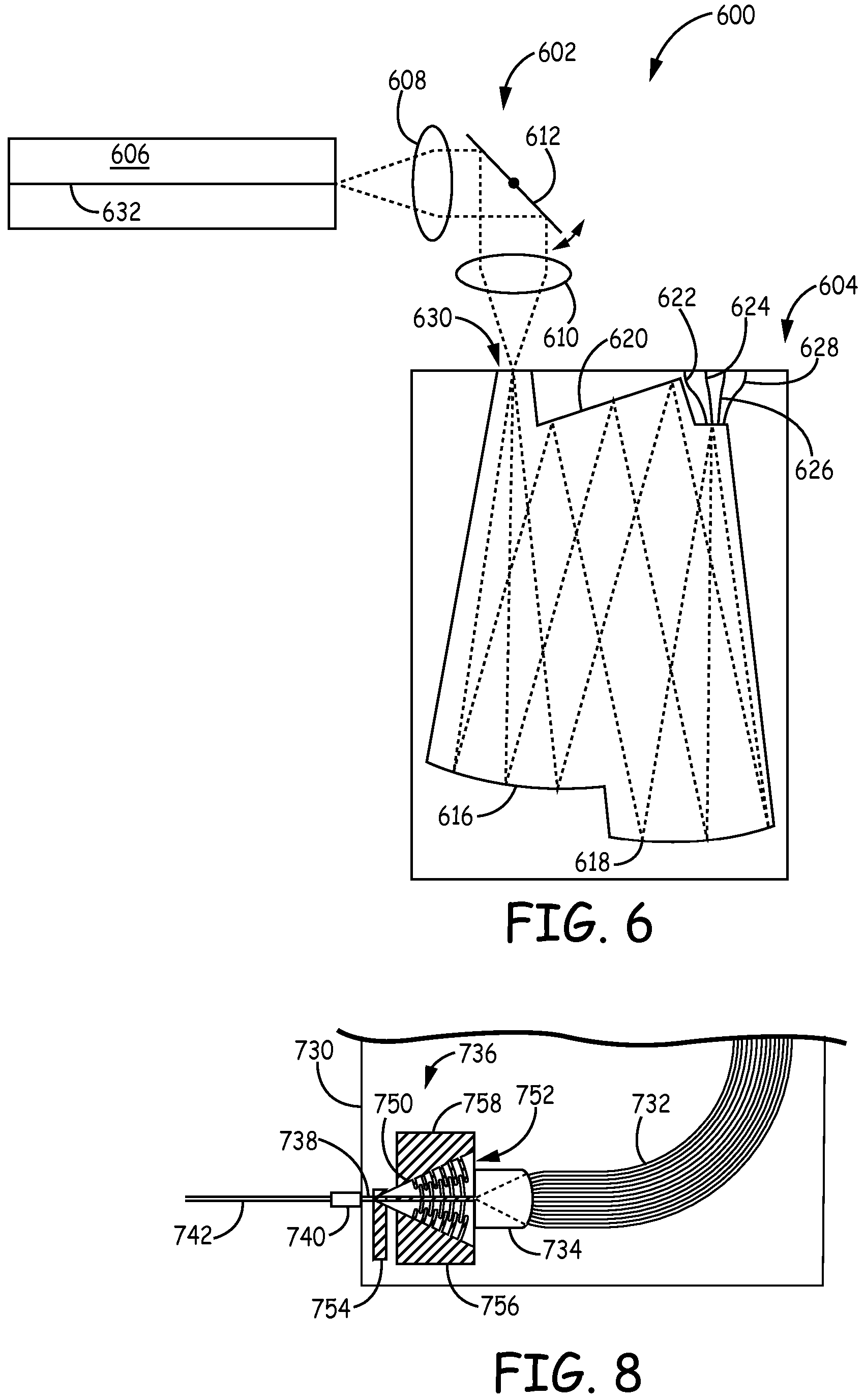 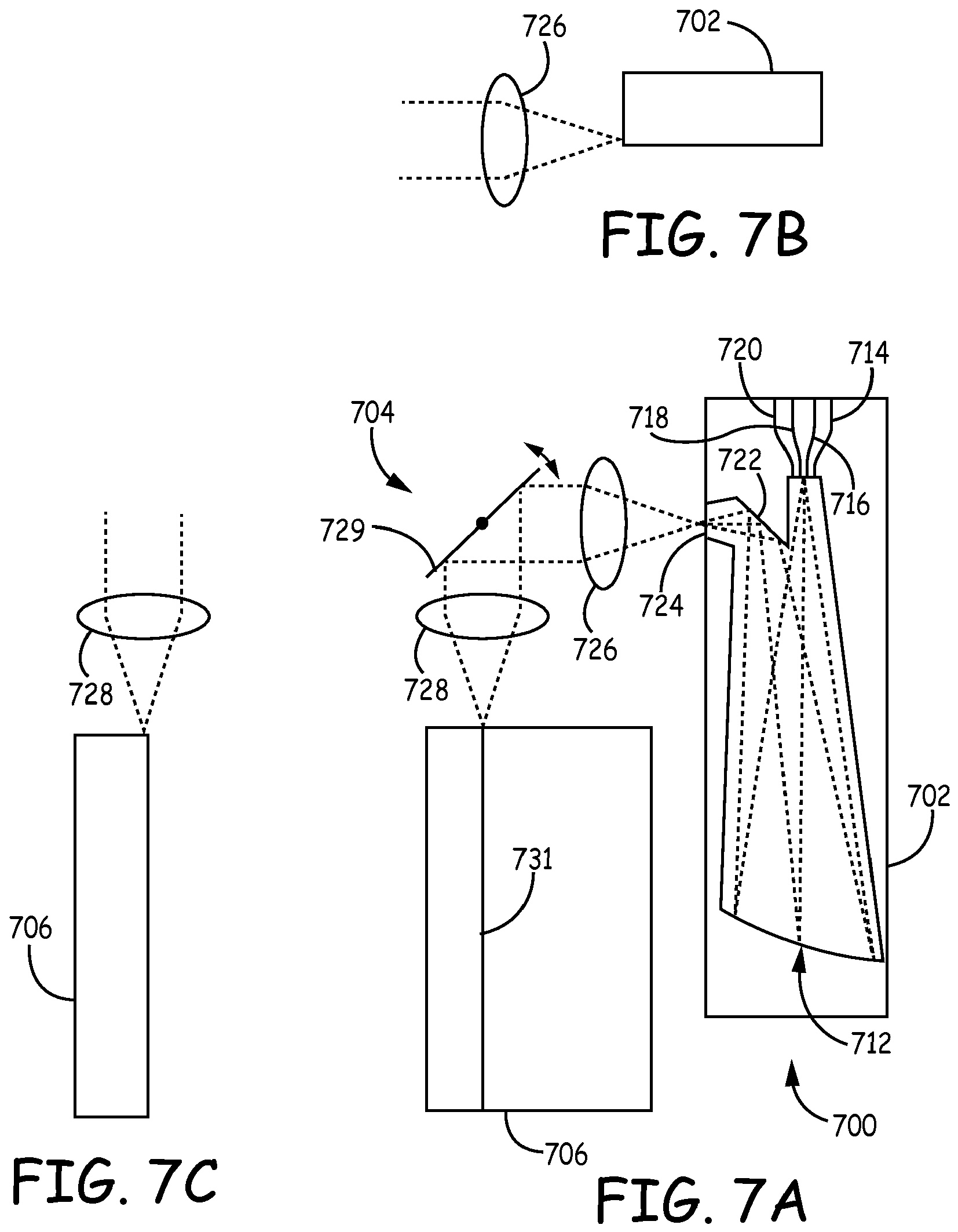 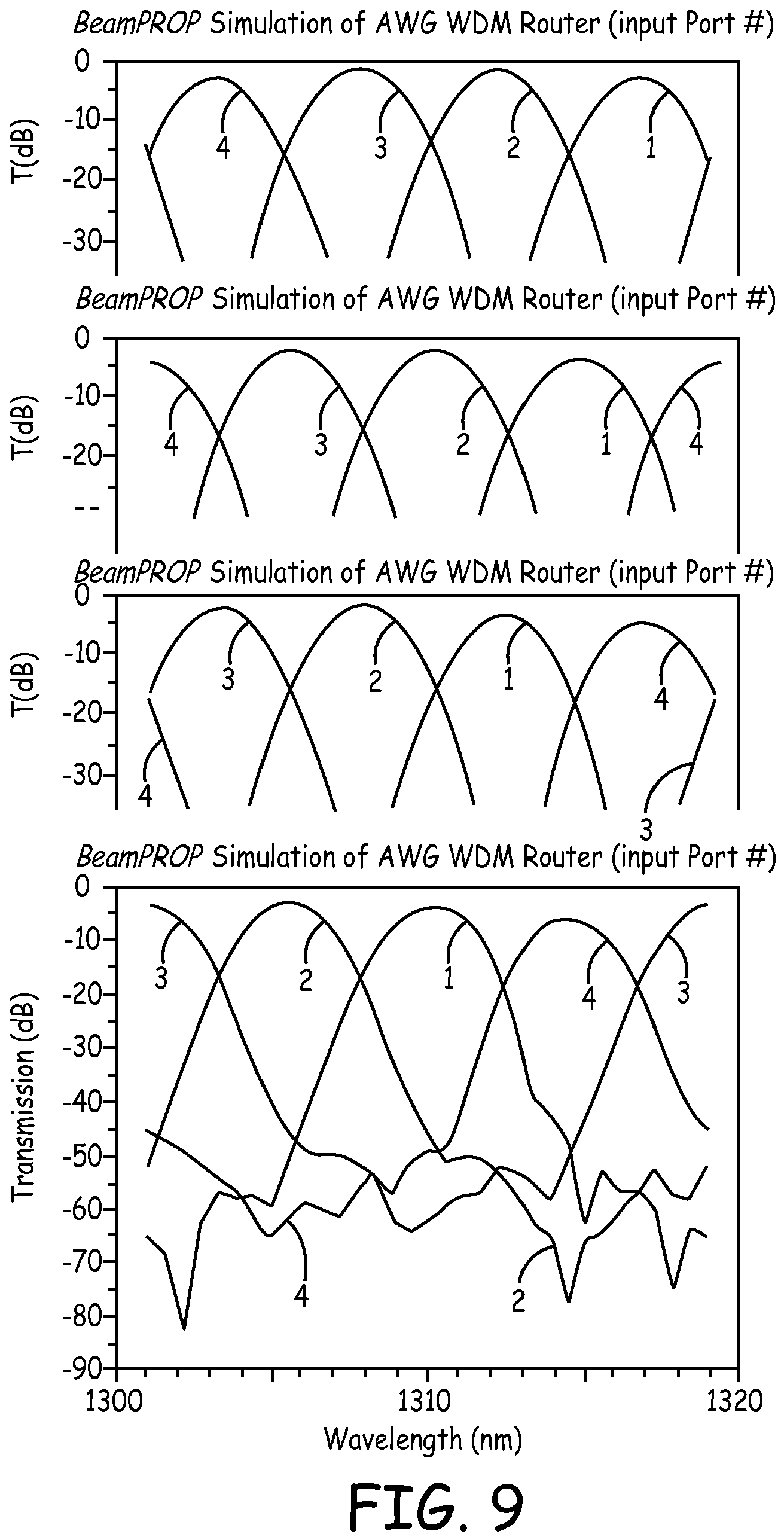 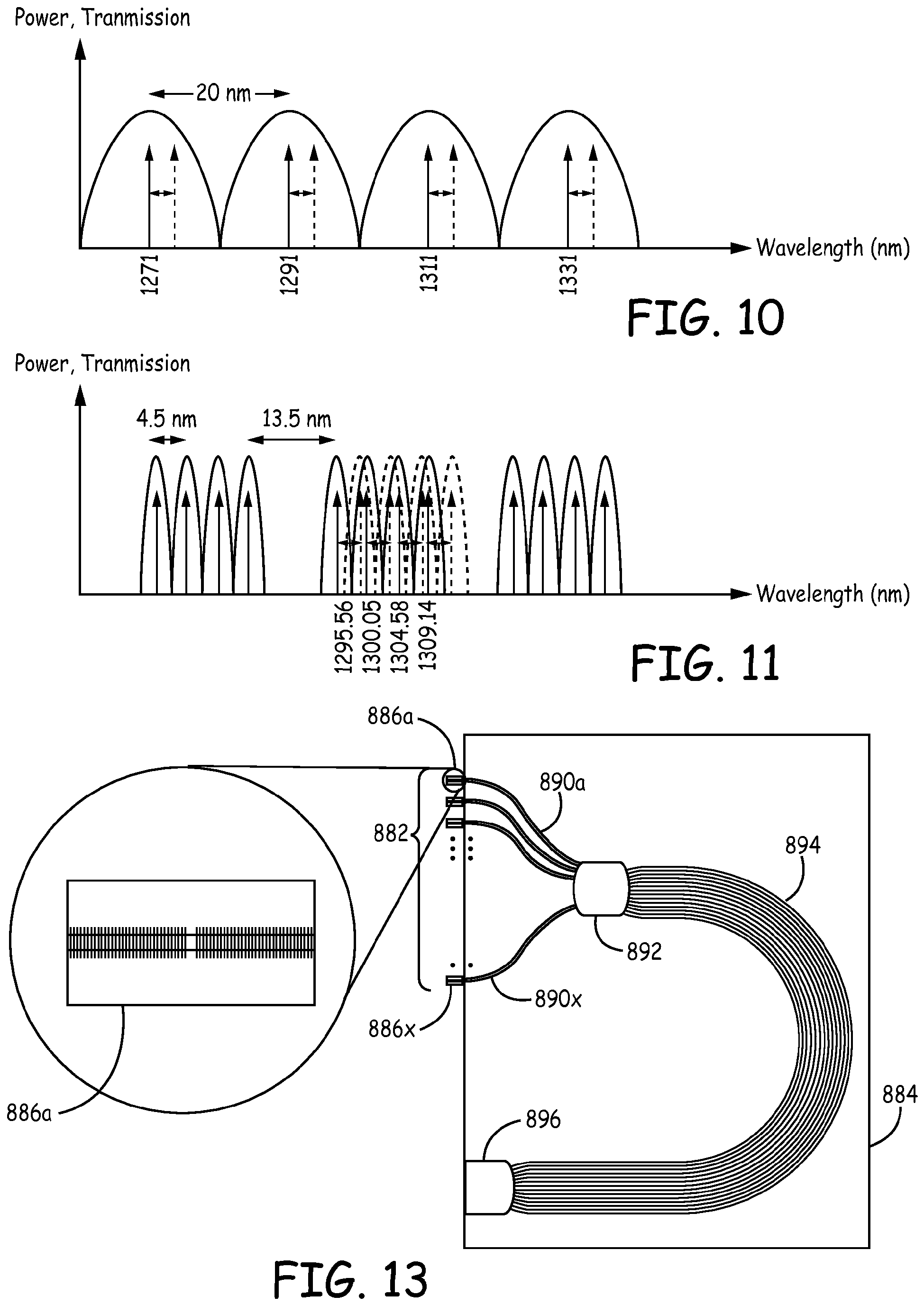 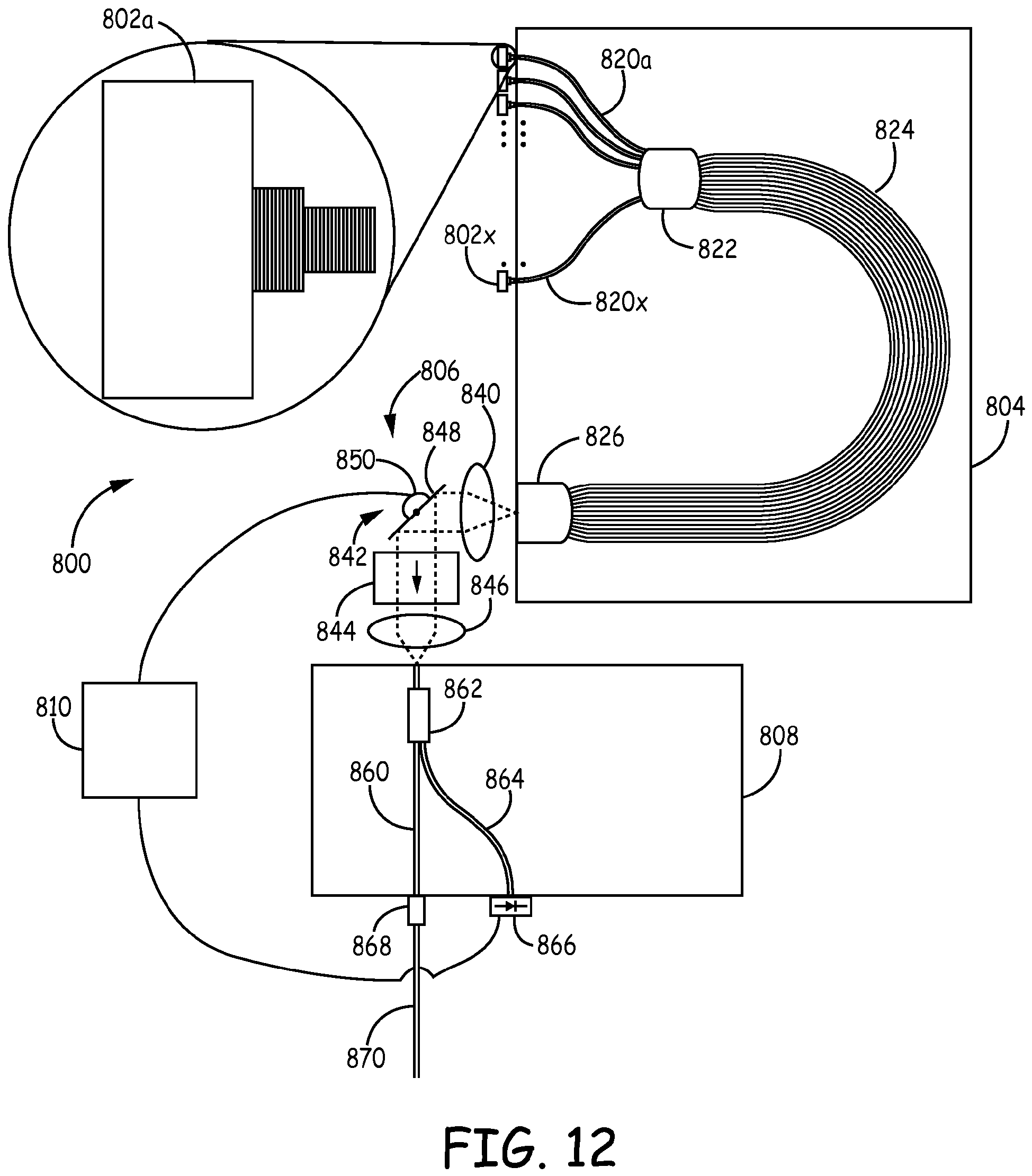