[0002] The present disclosure generally relates to a system and an exemplary method not forming part of the invention, for providing a transabdominal gastric surgical access system for medical, endoscopic, and surgical instruments through a percutaneous surgically constructed opening. More particularly, it concerns a delivery system and a surgery system having structure for creating and enlarging the opening, and providing gastric access through multiple ports for the insertion of surgical instruments for medical procedures.

FIG. 1 is a schematic representation of a transabdominal gastric surgical device in accordance with the invention shown installed within the stomach of a patient;

FIG. 3 is a perspective view of the insertion of the surgical device with the introducer device in a cross sectional view of the patient.

FIG. 4 is a perspective view of the surgical device in place within a patient and removal of the introducer device in a cross section view of the patient.

FIG. 5 is a perspective view of the introducer device preloaded with the surgical device.

FIG. 6 is a side view of the proximal end of the introducer device preloaded with the surgical device.

FIG. 7 A, B, and C are perspective, top, and side views of the external anchor.

FIG. 8 A and B are perspective views of the external anchor with a closure configuration to demonstrate the closure of the created opening.

FIG. 9 A, B, C, and D are perspective views of the introducer device and the surgical device.

FIG. 11 A, B, C, and D are side and perspective views of the cannula and internal anchor of the surgical device.

FIG. 12 A and B are perspective views of the surgical device in conjunction with a tear away PEG.

FIG. 13 is a schematic view demonstrating use of the surgical device(s) and triangulation within the gastric lumen.

FIG. 14 is a schematic view demonstrating use of the surgical device(s) within both the gastric lumen and the extralumenal cavity.

1. A surgical system (1) for providing transabdominal access for surgical instruments through a surgically constructed opening (18) between an external body surface, the abdominal wall (14), and the stomach (10) of a patient, the system comprising:

a gas insufflation port (95) connected to the cap for insufflation of a gas to the stomach (10) to provide gastric distension;

the access ports each including a double-seal (93) disposed to reduce contamination of the cannula lumen and maintain intragastric insufflation by preventing escape of insufflated gas; and,

the access ports configured to provide instrument access to the interior of the stomach of the patient at a plurality of different angles,

further comprising an insertion tool (28) connected to the cannula (14), wherein the cannula has an external anchor removed configuration, for retrograde introduction of the system for transabdominal gastric access.

the cannula includes a plurality of cannula sections, each section configured for telescoping reception of a portion of the section within a portion of the lumen of an adjacent section so that the overall length of the cannula (20) may be reduced during insertion;

the sections being removably connected to permit removal of one or more sections from the end of the cannula.

the inflation tube (46) connected to an inflation valve; and

7. The system of any of the preceding claims, wherein:

the anchor discs (24) (70) (72) (74) and internal anchor (22) are disposed to cooperatively and adjustably create communication between the wall of the stomach (10) to the abdominal wall (14) of the patient.

8. The surgical system of any of the preceding claims, wherein the insertion tool comprises:

the tapered shield configured to receive the core (142) with entrained cannula for causing dilation of the surgical opening to receive the tool there through; and

the tapered shield (152) including at least one longitudinal score (170) configured for tearing away the shield following placement of the cannula within the body of a patient. 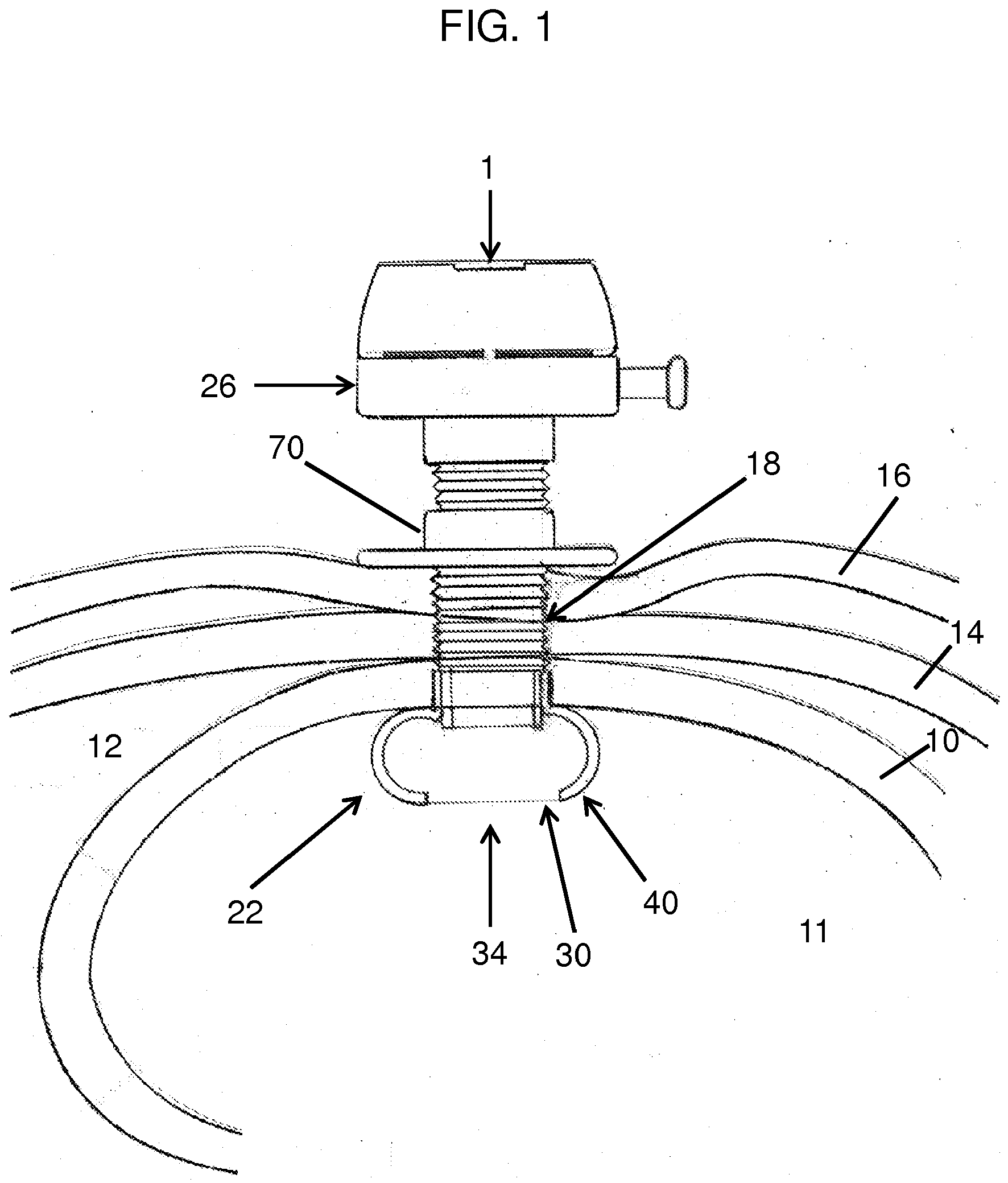 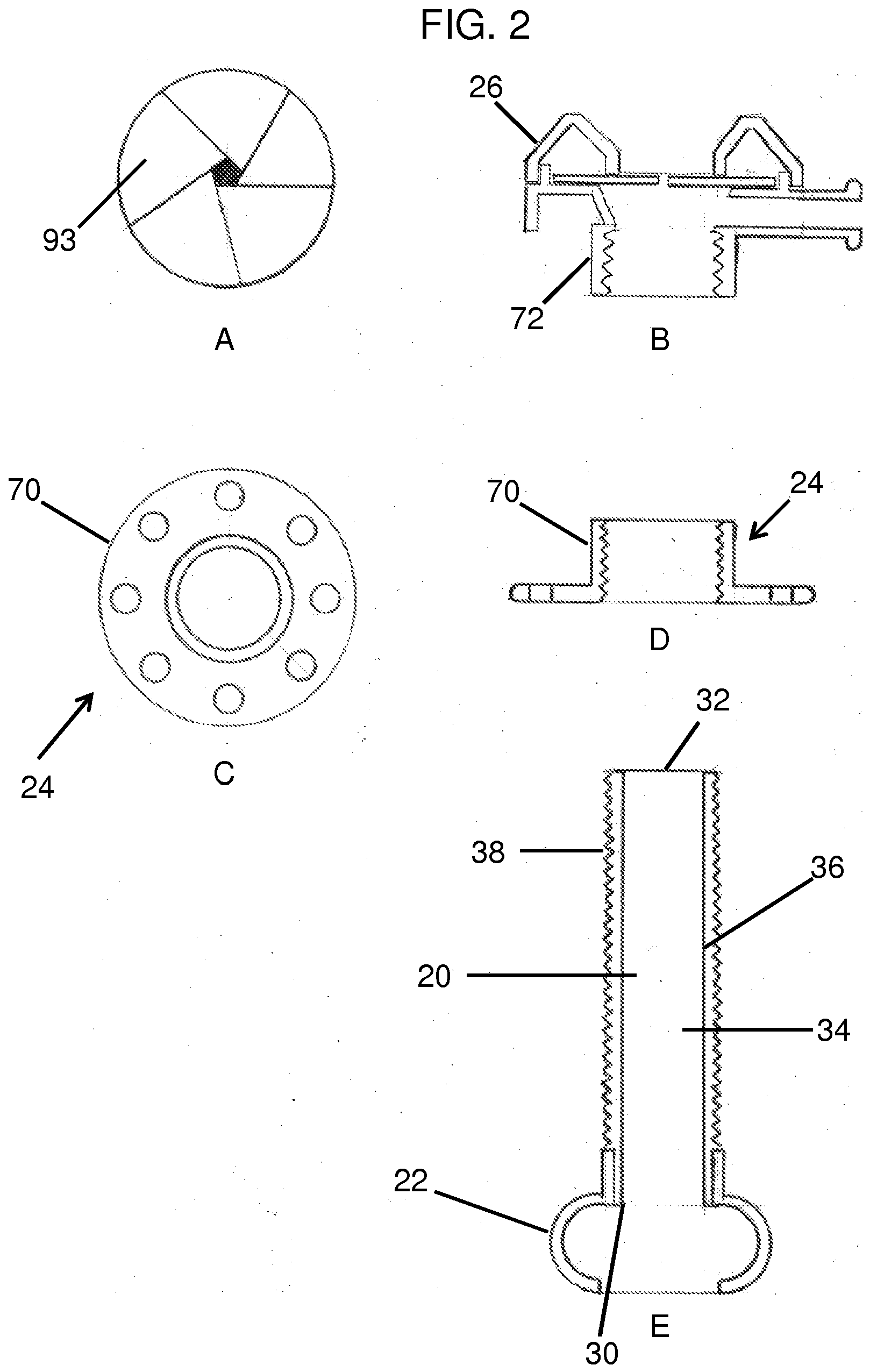 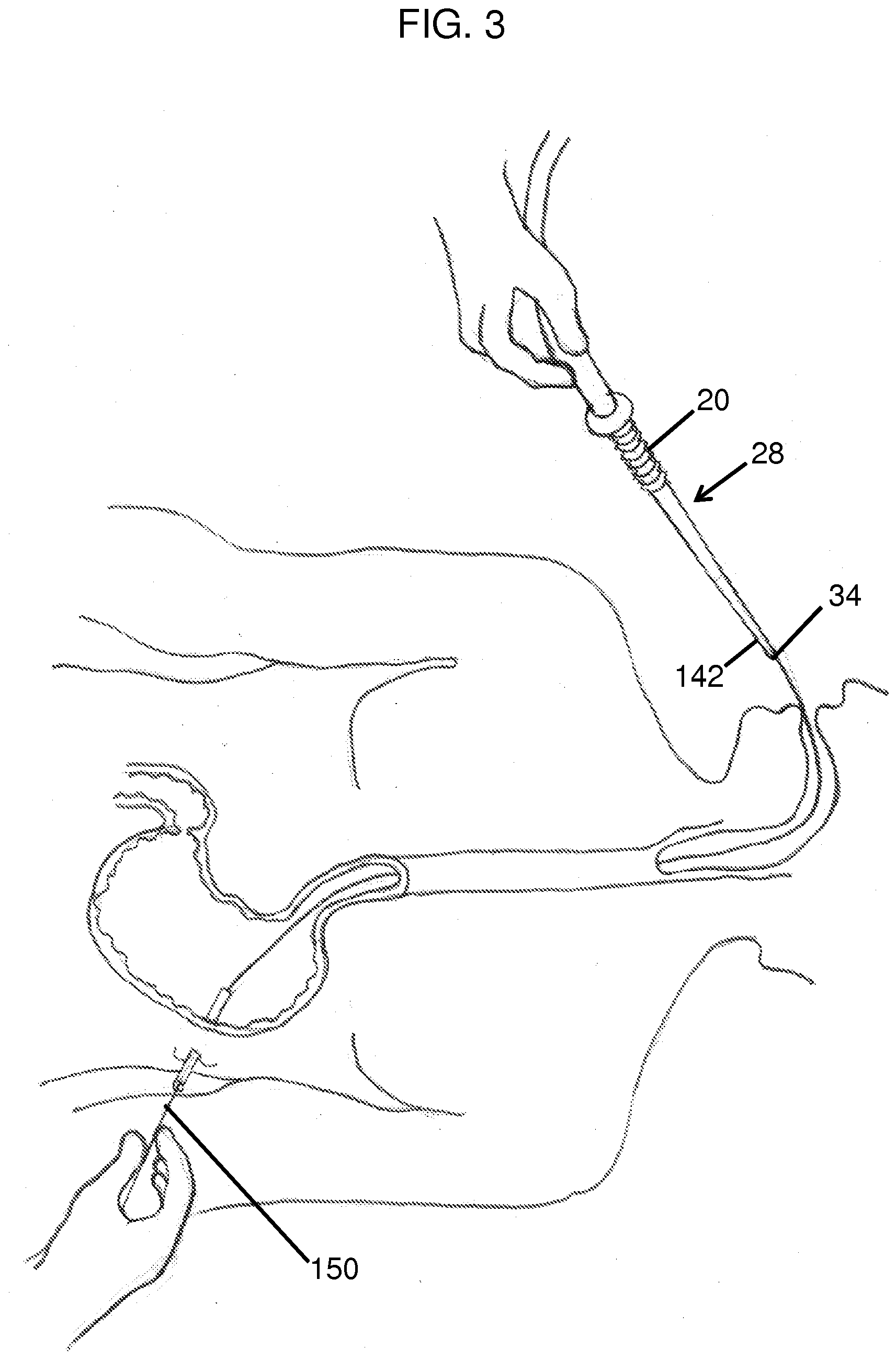 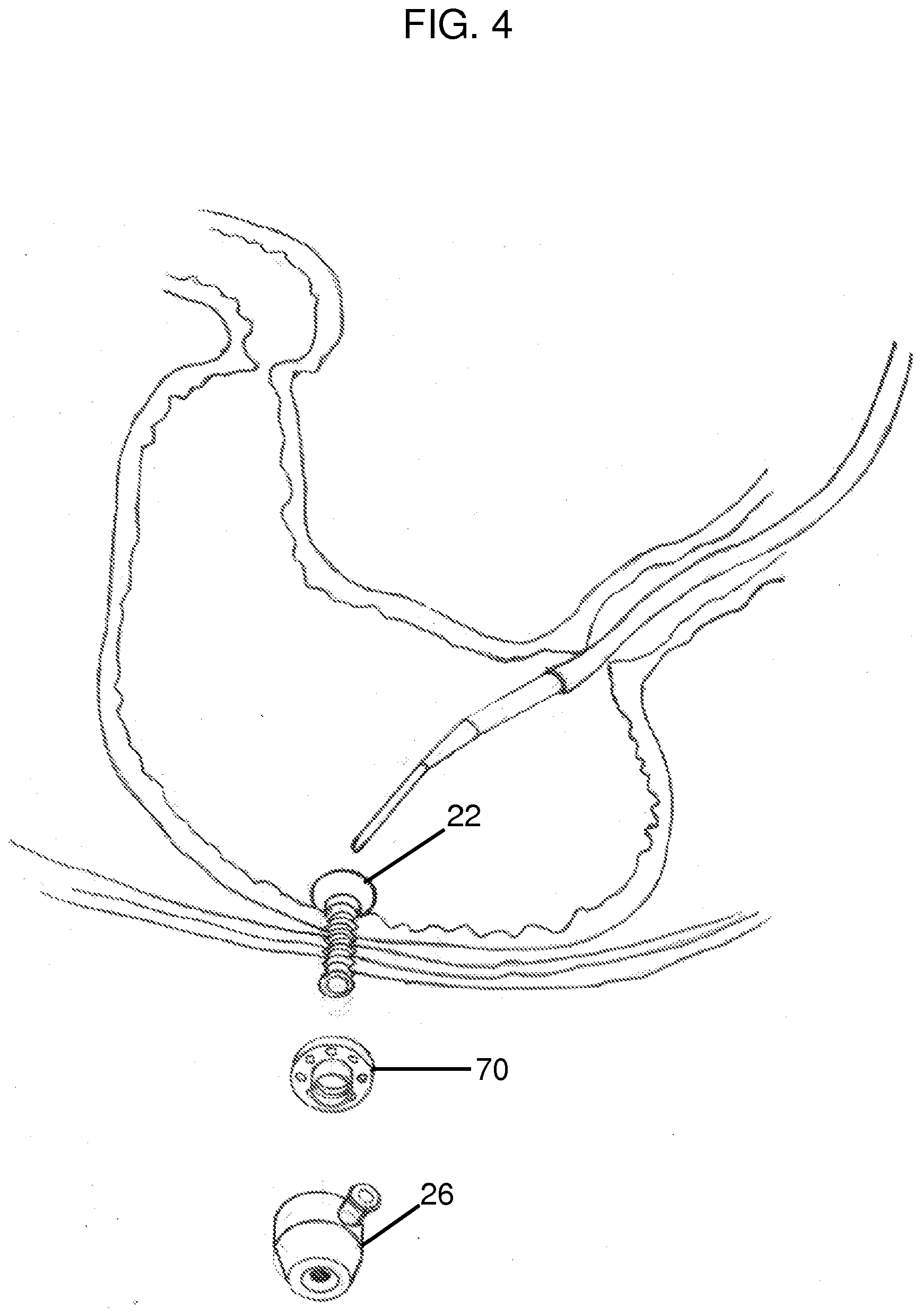 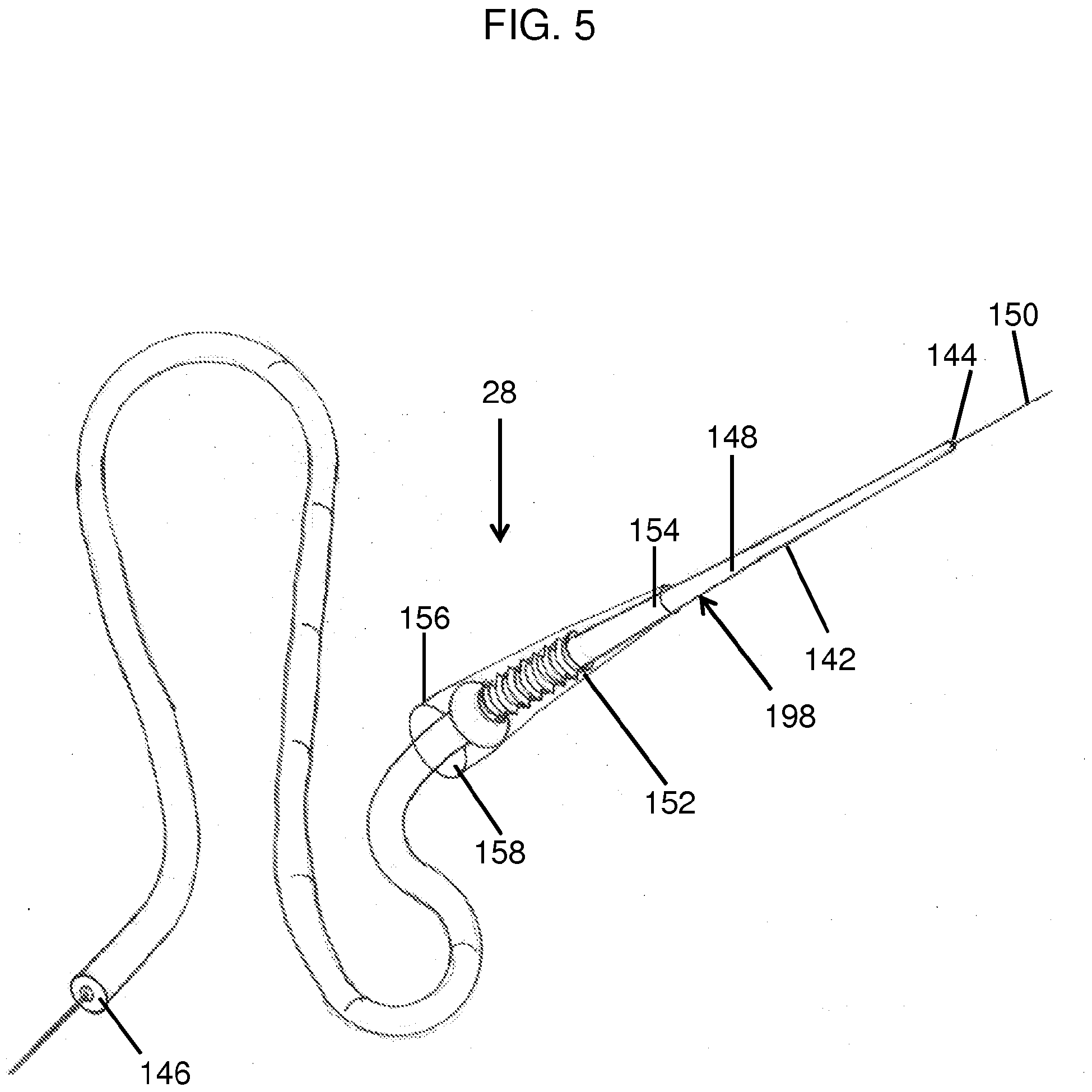 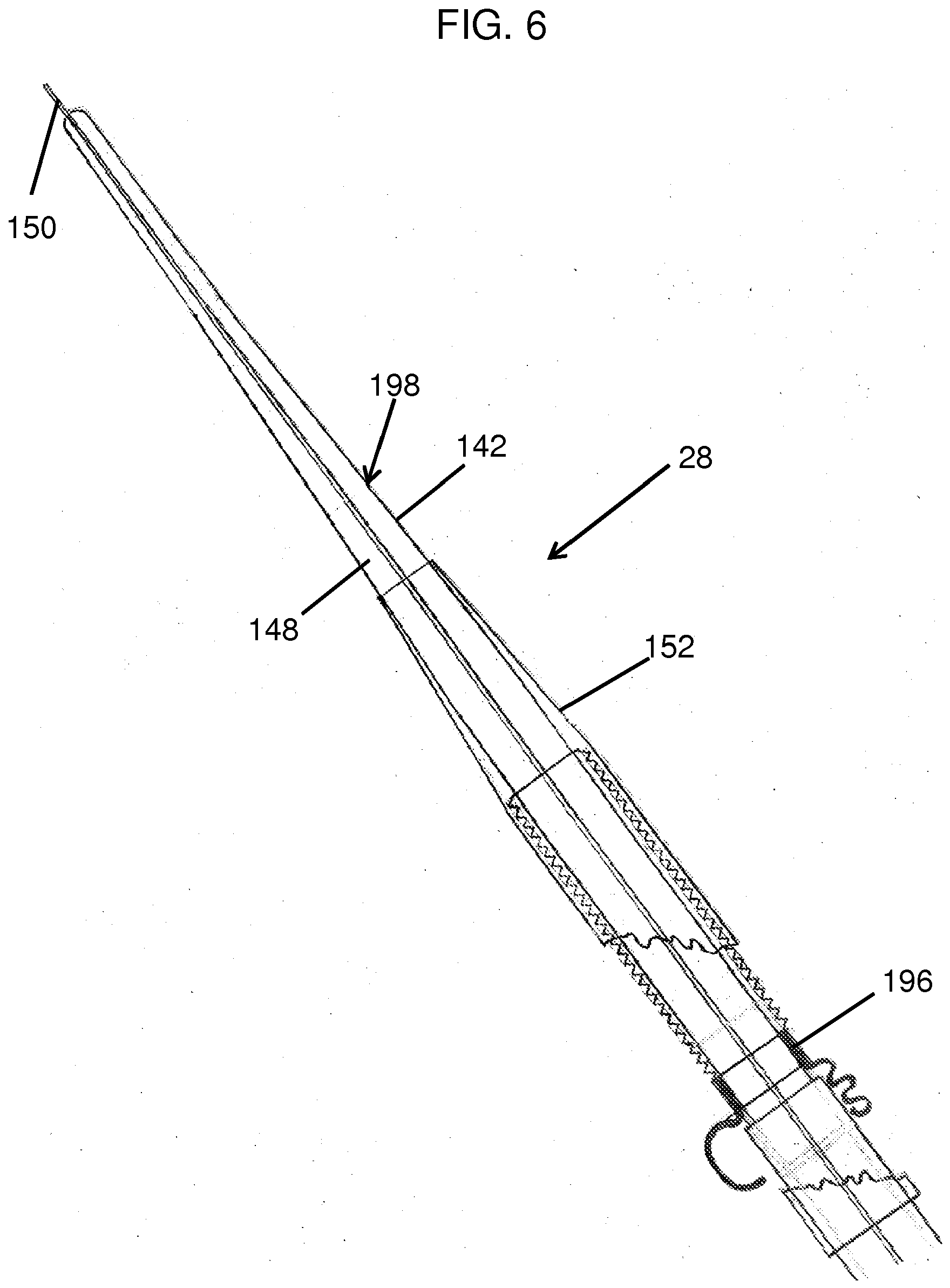 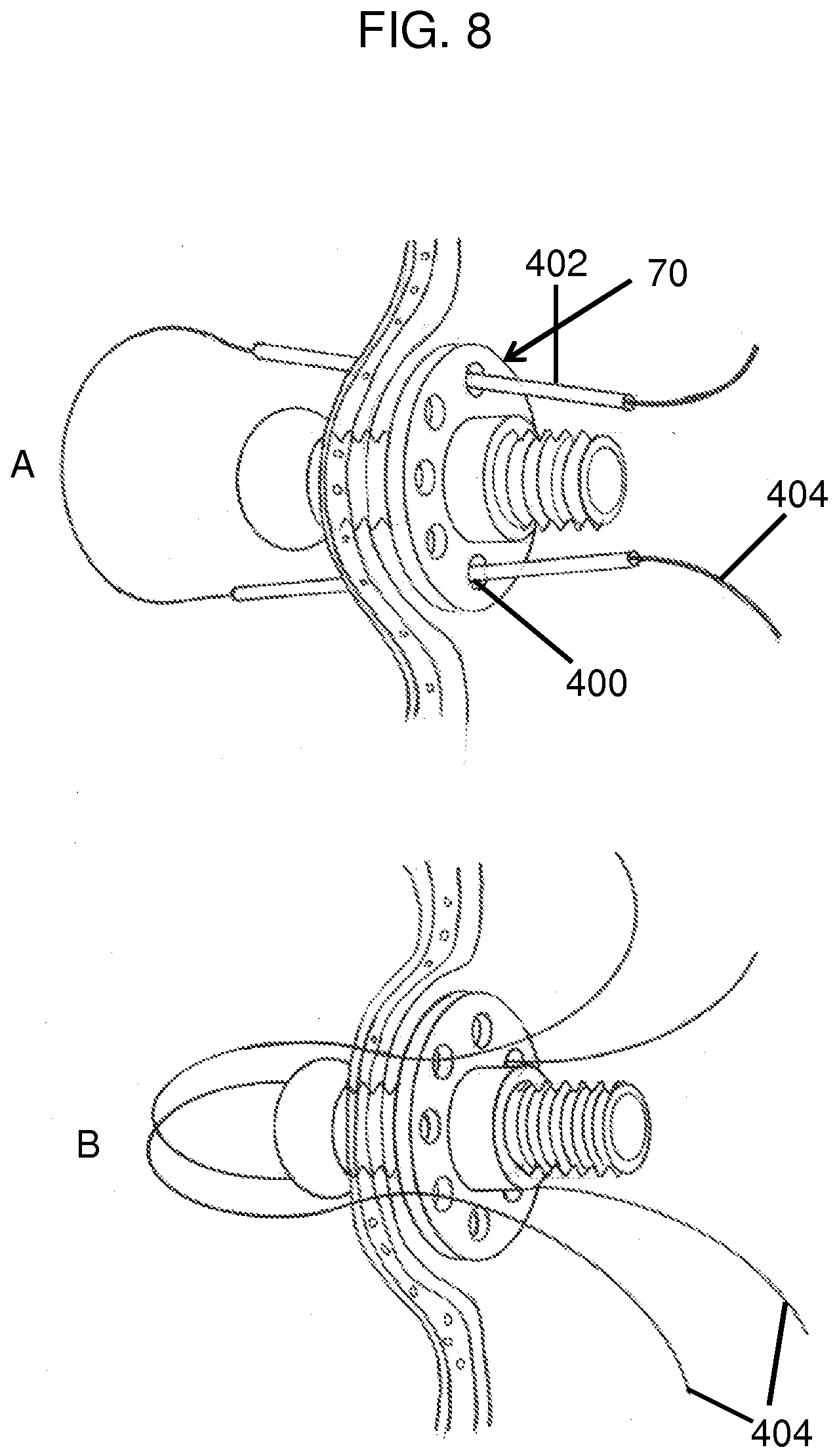 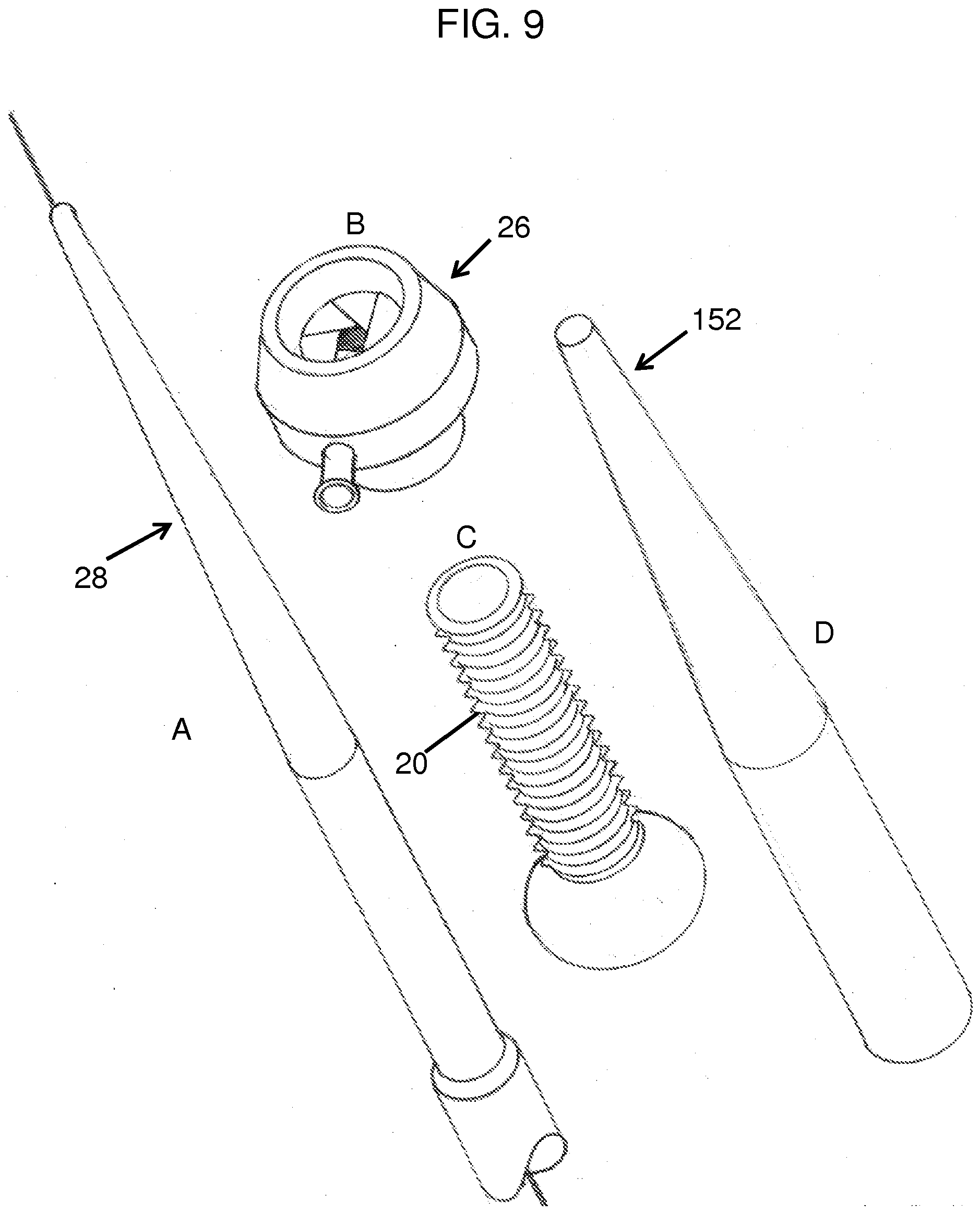 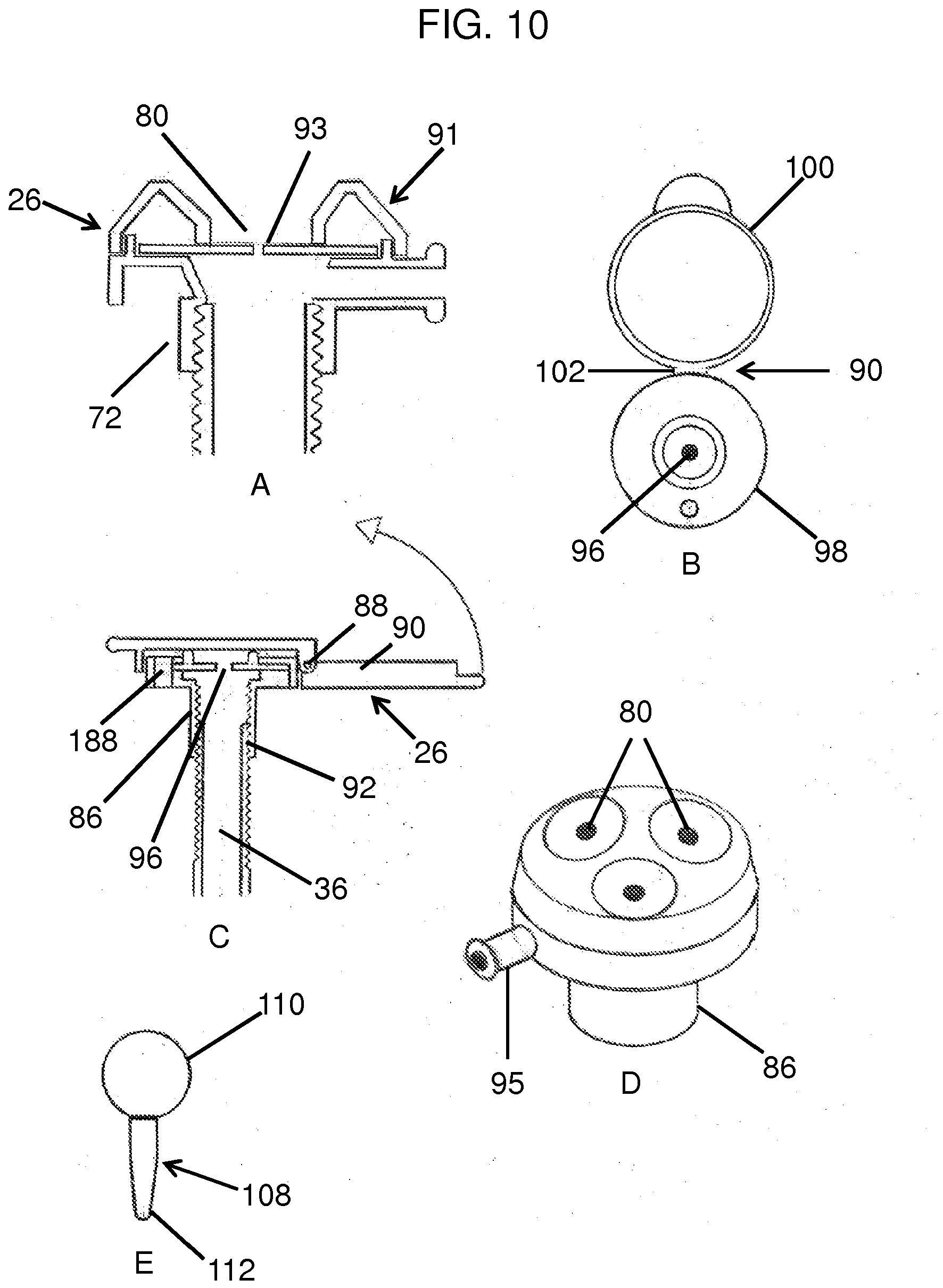 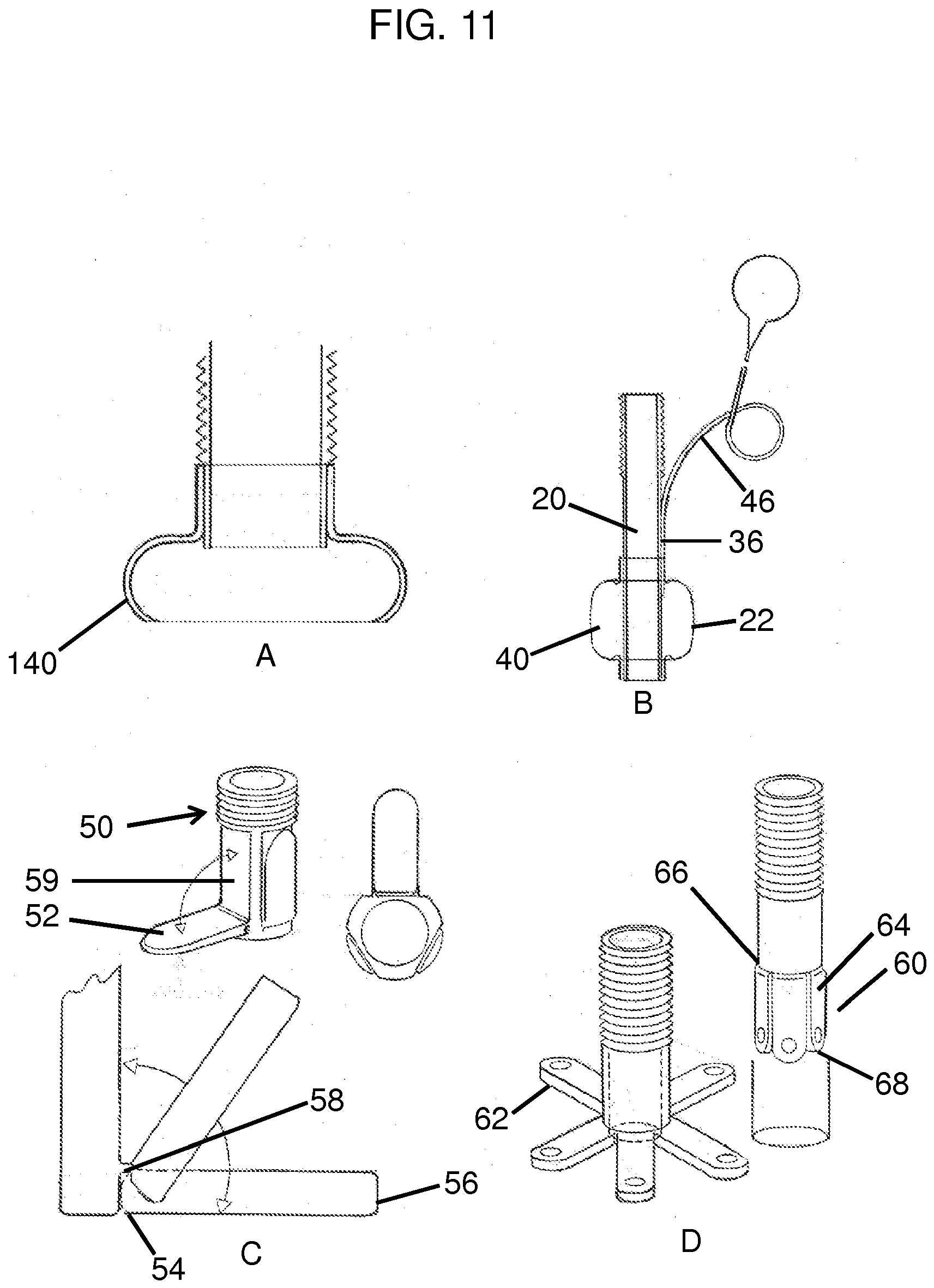 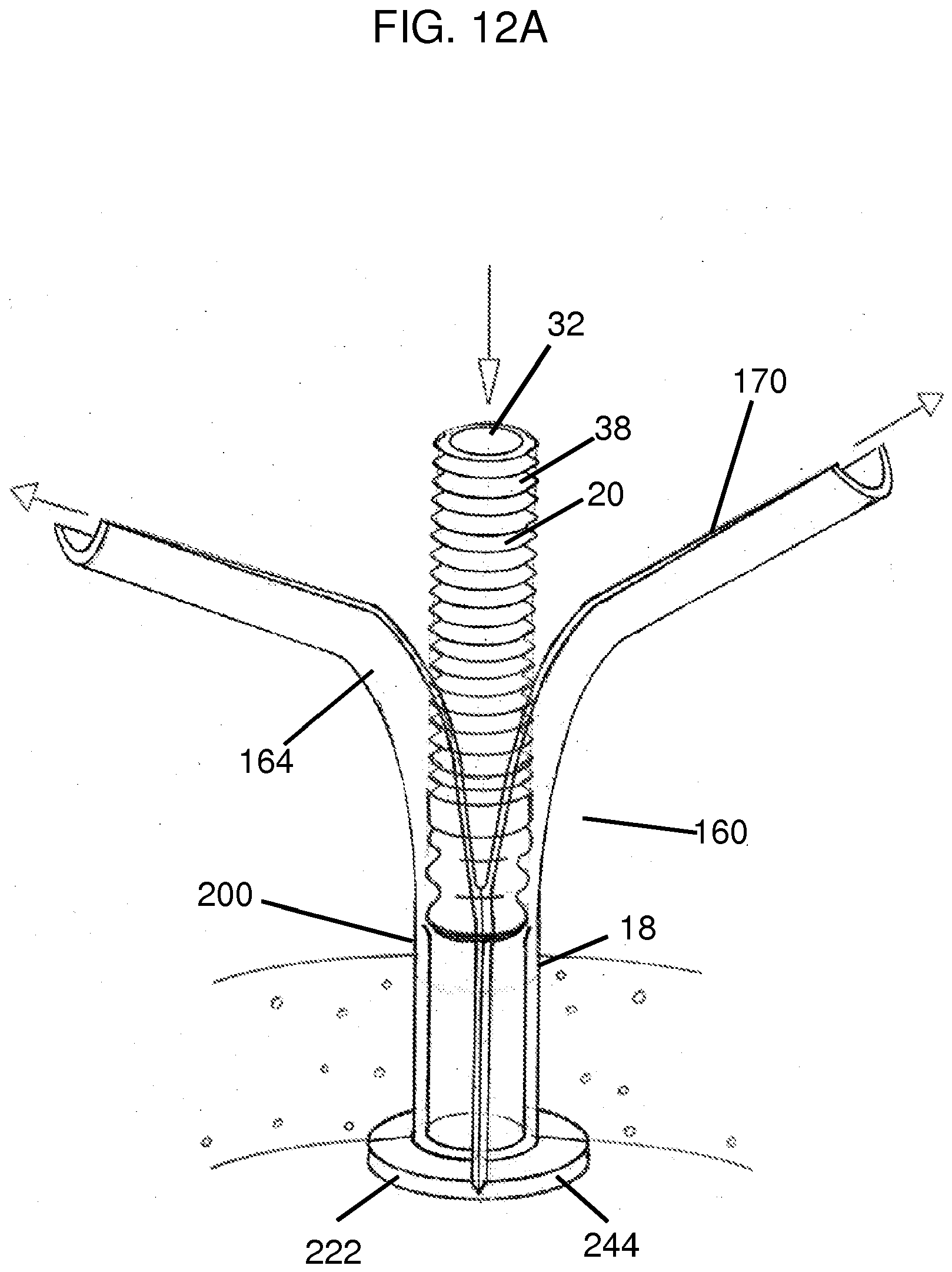 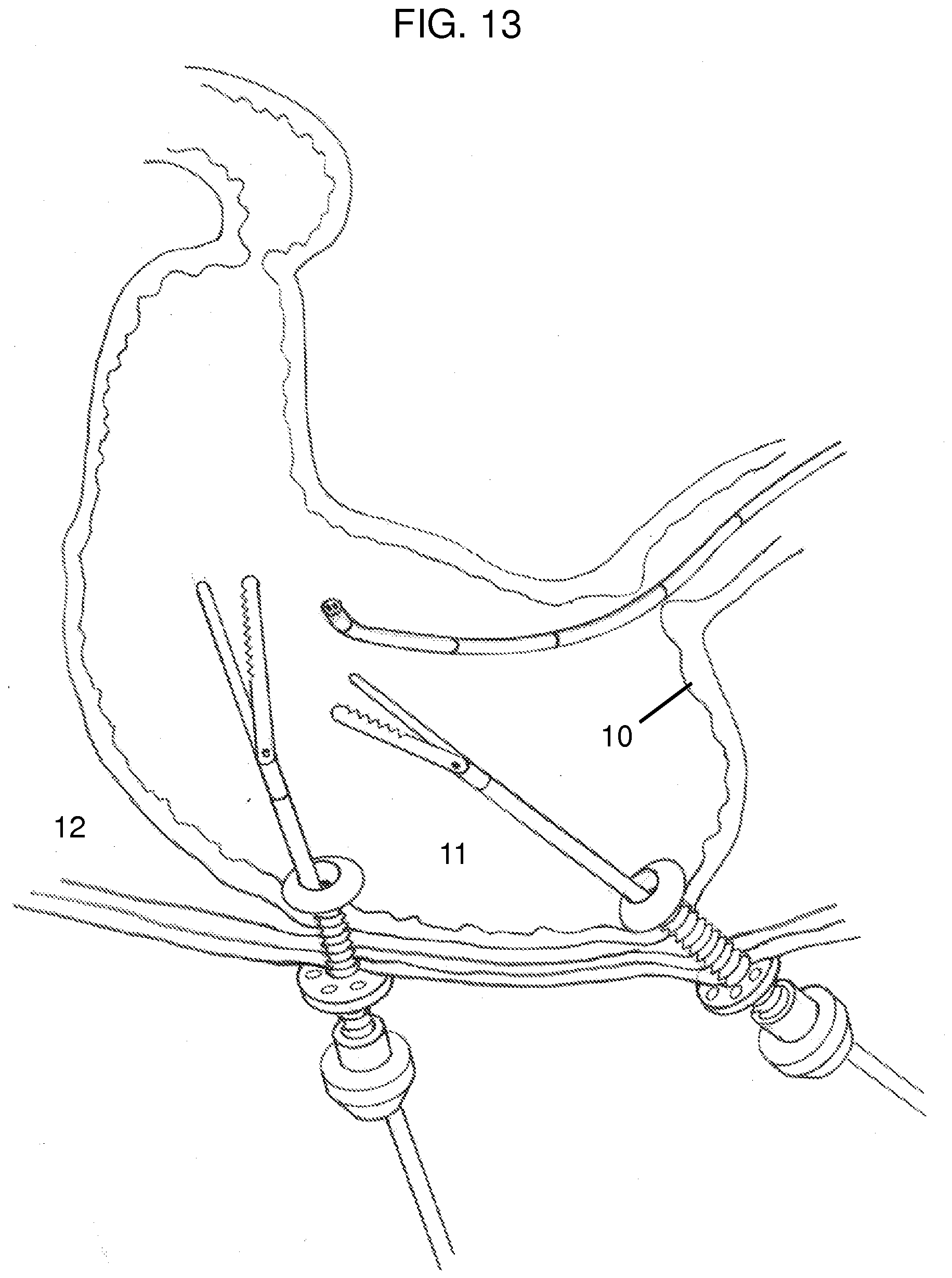 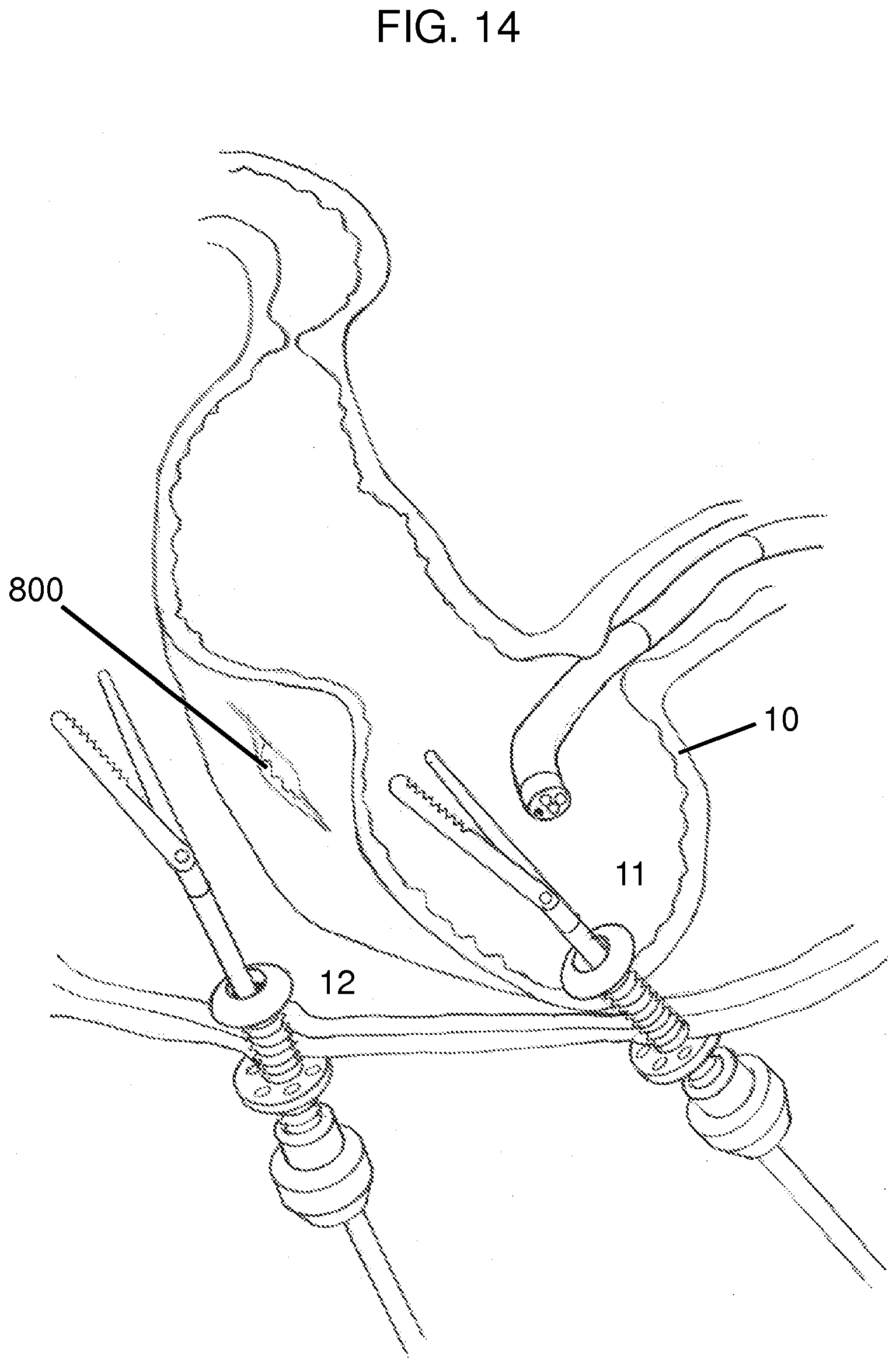