[0001] The present invention relates to an electrically insulating flexible laminate for positioning inside a pipe having a known inner circumference comprising a conductive circuitry, especially an electrically conductive foil providing a Faraday cage in said pipe.
[0002] Specifically the invention relates to a concept for integration of a Faraday cage for shielding of electronics that has been invented to overcome technical issues in high temperature applications.
[0003] It is known that electronic systems circuitry in pipes may need electronic shielding in order to avoid noise or disturbances from the environment. Known system for shielding electronic circuitry inside a pipe consists of inserts in pipes where the inserts are made from pipe sections consisting of layers of electrically insulating and electrically conductive materials. Originally, in the present application, a Faraday cage shielding was provided by two double-sided, metal-clad laminates bonded together by an adhesive film. The adhesive film involved a material not suitable for high temperature applications, which added some unwanted risks to the shield integrity and to the enclosed assembly. The laminate size fits the length and the circumference of the assembly plus the required overlap to make the shield completely enclose the assembly. Thus there were problems both relating to the layered structure being vulnerable to the high temperature environment in the pipes, which may lead to disintegrating of the layered structure and thus ruining the protection, and to the adaptation of the device to the individual pipe dimensions. Examples of laminated films or sheets are discussed in US20009/0165296 and US2011/0135884, while a shielded flexible pipe is shown in JP2012104727A.
[0004] Thus it is an object of the present invention to provide a low cost and robust means for positioning an electrically conductive layer being insulated from pipe wall and pipe interior into a pipe, especially for obtaining a Faraday cage protecting an electronic circuitry inside the pipe. This is obtained as specified in the accompanying claims.
[0005] The present invention eliminates materials incompatible for high temperature long-term use. The construction can easily be designed and adapted to individual requirements and is not only advantageous in high temperature applications. The benefits of this shield construction are:
[0006] The invention will be described below with reference to the accompanying drawing, illustrating the invention by way of example.

[0007] As illustrated in figure 1a-c the concept is visualized schematically, where the sizes are not necessarily to scale. Figures 1a and 1b illustrates the laminate seen from above and from a direction corresponding to the lower side of fig. 1a, respectively, and fig. 1c illustrates the present invention 1, 2 mounted between the pipe wall 3 and the instruments 4 inside the pipe. The invention comprises a laminate including a flexible substrate 1 or similar made from an insulating material. Part of the substrate is covered by an electrically conductive layer 2 being constituted by a foil forming a continuous layer, grid, circuitry or similar of conductive material depending on the use. In the preferred embodiment the layout of the conductive layer 2 is sufficiently dense to provide a Faraday cage when rolled and mounted into the pipe.
[0008] The length L of the conductive layer 2 in the first direction may depend on the use, e.g. depending on the dimensions of the circuitry inside to be shielded, and in the second direction the conductive layer essentially at least corresponds to the inner circumference C of the pipe 3. This way the conductive layer will surround a section of the pipe interior in a length L.
[0009] In order to insulate the conductive layer 2 the substrate extends at least two times the pipe circumference in the second direction. Thus, by rolling the laminate according to the invention the conductive layer may be positioned between the substrate on which it is bonded and the substrate not being provided with a conductive layer. Referring to figure 1b the laminate may thus be rolled from the right so as to enclose the conductive foil completely in insulating materials. This may then simply be inserted into the pipe as illustrated in fig. 1c.
[0010] The physical shield is thus designed using a flexible printed board rolled into a tubular shape enclosing the assembly containing the electronics to be protected. The construction provides an insulating layer on each side of the conductive shield layer that constitutes the Faraday cage. The outer insulating layer functions as an insulating barrier between the Faraday cage and the conductive pipe. The inner insulating layer functions as an insulating barrier between the Faraday cage and the enclosed assembly.
[0011] The new invention thus provides the same functionality as the previously used solution by achieving an improved functional construction without the problematic adhesive. The invention can by example be produced by the following process: A single double-sided, metal-clad laminate is processed into a single-sided laminate (by etching using standard printed board fabrication processes). One dimension of the single laminate is corresponding to an integer number of the circumference of the assembly (plus the required overlap). The laminate sheet is divided into sections, where a 'section' is defined as fully covering the circumference once. The construction is build by multiple steps of sections rolled over the assembly:
[0012] In figure 2a and 2b the laminate is provided with a bare substrate part 1a, 1b on each side of the conductive part. This way the roll direction does not affect the function of the laminate as the conductive layer will always be positioned between the first and second bare section. In addition figure 2b illustrates an additional conductive layer 2b on the other side of the substrate, thus increasing the robustness of the shield for any damages and/or improving the efficiency of the Faraday cage. One or both conductive layers may include circuitry and be connected through the insulating substrate 1.
[0013] To summarize the invention thus relates to an electrically insulating flexible laminate for positioning inside a pipe having a known inner circumference, e.g. a pipe prepared for containing electronic equipment at a known position or the pipe being adapted to contain electronic equipment being moved through a larger pipe. The laminate according to the invention has a first dimension extending a chosen length along the pipe and includes a first section comprising an electrically conductive area on a substrate or similar made by an electrically insulating material, and a second section being constituted only by the electrically insulating material. Both the first and second section has a second dimension perpendicular to the first at least exceeding said inner circumference of the pipe into which it is to be positioned. The second section thus being adapted to cover said first section when rolled over and positioned along the inner circumference of said pipe.
[0014] The conductive area on said first section extends along a length in the second direction constituting at least one circumference of the pipe, thus providing a space within the pipe enclosed by the conductive area providing a local Faraday cage inside said pipe. The first section is preferably constituted by a metal-clad substrate processed into a single-sided laminate, e.g. by etching using standard printed board fabrication processes, for example a metal layer is copper bonded to the substrate. The insulating material or substrate may be made from a flexible printed board, e.g. of a film composed by polyimide.
[0015] The present invention also relates to a shielded electronics unit providing an electronic shield for electronic equipment positioned in a pipe. The shield comprises a laminate as discussed above where the length of said conductive area in said first direction exceeding the length of the electronic equipment in the direction of the pipe, and in the second direction at least exceeds inner circumference of the pipe, the conductive material being adapted to provide a Faraday cage within said pipe. 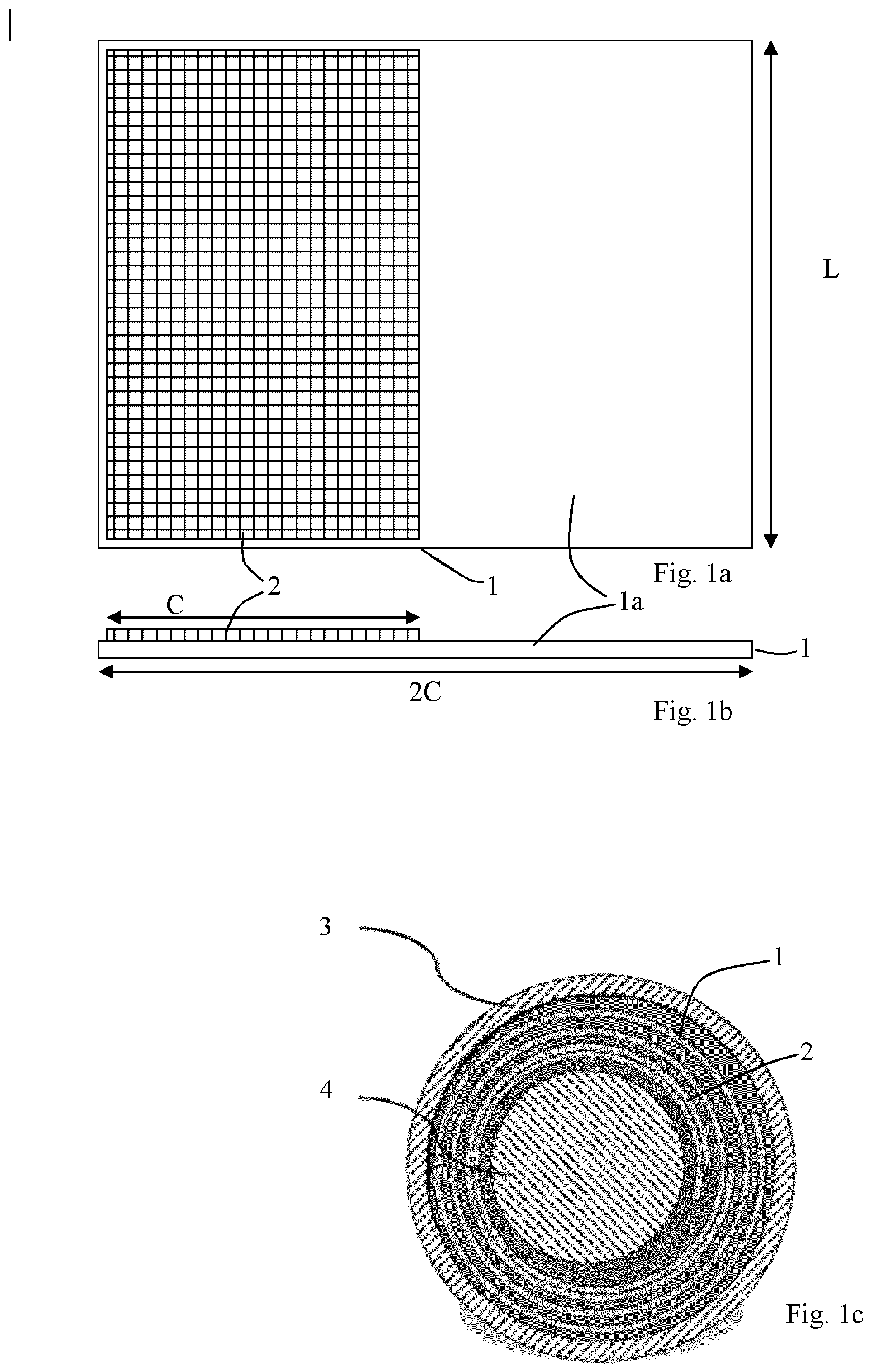 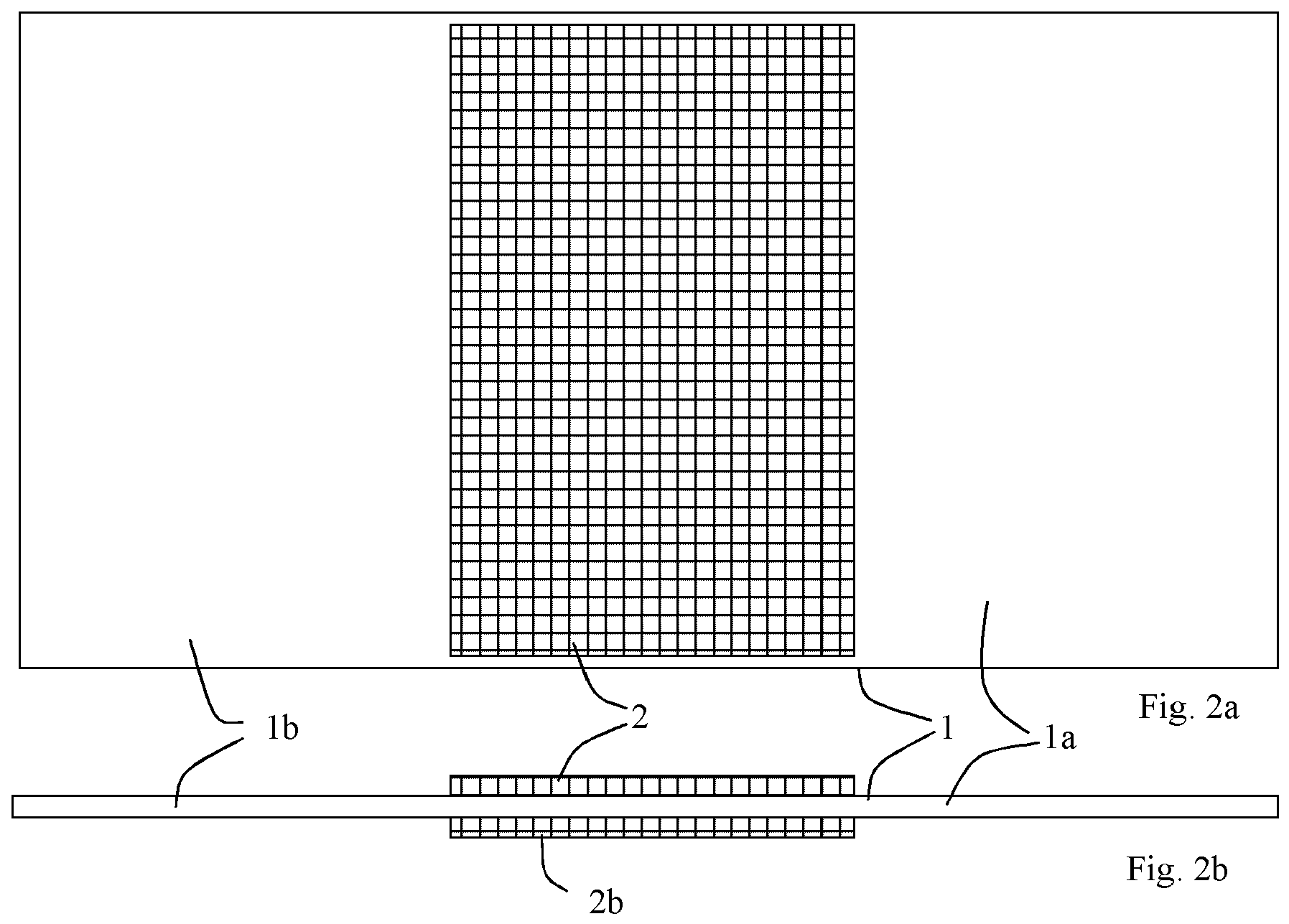