[0002] The present embodiments relate to the estimation of comprehensive parameters related to the whole-body circulation from medical imaging and clinical data.
[0003] The capacity of the heart to pump sufficient blood to match its own demands and the demands of the body depends on both intrinsic and extrinsic factors. The modeling of these factors may lead to better approaches to evaluate and manage cardiac disease, as well as better patient stratification and therapy planning. However, many models of whole-body circulation are overly simplified, process intensive, too general (i.e. not reflecting patient's physiology), and/or inaccurate to be of use in clinical settings for assisting a given patient. Radomir Chabiniok: "Personalized Biomechanical Heart Modeling for Clinical Applications", 24 January 2011 (2011-01-24) discloses a personalized whole-body circulation calculation system considering spatial data of a patient, cardiac electrophysiological data of the patient and pressure data of the patient to compute circulation metrics.

[0005] The components and the figures are not necessarily to scale, emphasis instead being placed upon illustrating the principles of the invention. Moreover, in the figures, like reference numerals designate corresponding parts throughout the different views.

Figure 1 is a flow chart diagram of one embodiment of a method for personalized whole-body circulation calculation;

Figure 2 illustrates an example of exchange between cardiovascular and regulatory systems;

Figure 3 illustrates the components of the cardiovascular and regulatory systems of Figure 2;

Figure 4 illustrates one embodiment of a lumped parameter, closed-loop model of the cardiovascular system;

Figure 5 illustrates one embodiment of a combined lumped and three-dimensional, closed-loop model of the cardiovascular system;

Figure 6 illustrates one embodiment of an extended or greater scale lumped systemic and pulmonary model;

Figure 7 is a flow chart diagram of one embodiment of a method for personalization;

Figure 9 is a flow chart diagram of one embodiment of a method for personalized, whole-body circulation calculation;

Figure 10 is a flow chart diagram of a further embodiment of the method of Figure 9;

Figure 11 is a flow chart diagram of another further embodiment of the method of Figure 9; and

Figure 12 is a block diagram of one embodiment of a system for personalized whole-body circulation calculation.

DETAILED DESCRIPTION OF THE DRAWINGS AND PRESENTLY PREFERRED EMBODIMENTS

where E is the time-varying elastance, V is the cavity volume, V0 is the dead volume of the cavity, Rs is a source resistance, which accounts for the dependence between the flow and the cavity pressure, and t is time. Solving for Rs provides Rs = KsE(t)(V(t) - V0(t)), where Ks is a constant. The cavity volume is equal to:

[0031] The lumped model also models the four valves (mitral, aortic, tricuspid, and pulmonary) of the heart. These valve models include a resistance, an inductance, and a diode. The diode is for simulating the opening and the closing of the valve based on the pressure gradient between the two sides of the valve. When the valve is closed, the flow across the valve is set to 0. When the valve is open, the following relationship holds:

where Pin and Pout represent the pressures at the inlet and the outlet of the valve, respectively. Each valve opens when Pin becomes greater than Pout, and closes when the flow rate becomes negative.
[0032] A three-element Windkessel model is used for the systemic circulation, represented by the following relationship between instantaneous flow and pressure:

where Rsys-p and Rsys-d are the proximal and distal resistances respectively, Csys is the compliance, and Pven is the venous pressure. A two-element Windkessel model is used for the systemic venous circulation:

[0033] The same models as represented in equations 4 and 5 are used for the pulmonary circulation. Different models may be used for any of the circulation and/or heart models. Together, the models are a lumped model of the closed-loop cardiovascular system model.
[0034] Figure 5 shows another example closed-loop cardiovascular system model. The model is a combination of a lumped model and a three-dimensional model. Part or all of the heart and/or circulation is modeled in 3D. In the example of Figure 5, the left and right ventricles are modeled in 3D while the reminder of the heart and circulation are modeled with lumped parameters. A diagnostically or therapeutically useful metric is computed using the lumped and 3D combined representation of the closed loop cardiovascular system.
[0035] If the focus of the model of the cardiovascular system lies on a specific part of the circulation, a more detailed model may be coupled to the rest of the cardiovascular system. In the example of Figure 5, the more detailed model is the 3D model, but a lumped model with additional parameters may instead be used. In the example of Figure 5, the focus is on the ventricles, but may be on other parts. The 3D model has any parameters, such as a mesh for the tissue boundary, parameters defining the physical operation of the valves and/or heart muscle, electrical activation parameters, and/or other information defining the 3D model.
[0036] The three-dimensional models of the ventricles are coupled to the above described closed-loop lumped model of Figure 4. The 3D model substitutes the time-varying elastance model of the lumped parameter model. The coupling is based on the exchange of pressure and flow rate (volume) information, but other values may be exchanged at the interface of the models. In one configuration, the following information may be exchanged: the 3D model provides the ventricular pressure and the rate of volume change at the current time step

while for the distal part of the system:

and the venous circulation equations are:

(where Mdia is the diaphragm tissue mass), damping forces

(with Ddia a damping multiplication parameter), and elastic forces Kdia * 1 (where Kdia is the diaphragm elasticity). These are balanced by external forces due to cavity strain on either side of the diaphragm (Fatr or Fvent) which may be modeled to depend on the atrial or ventricular elastance (e.g. Fvent = Kvent * event with event being the elastance function, and similarly for atrium), and forces due to pressure difference across the diaphragm (Pvent - Patr) . Adia, where Adia is the area of the diaphragm.
[0055] The motion of the KG diaphragm redefines the location of the atrioventricular boundary at each time instant and introduces volume changes to the two left chambers. The location and volume changes are represented as:

Then, the end-systolic volume is computed:

Next, the stroke volume is determined:

and the average aortic flow rate is computed:

Finally, the total systemic resistance, as well as the proximal and distal components, are determined:

where, r(x) is a vector function, called in the following objective function, and x is the vector of the unknowns (i.e., the parameters to be estimated). Each component of the objective function is formulated as the difference between the computed value of a quantity - (•)comp (determined using the lumped parameter model) and its reference value - (•)ref (determined through measurement in act 70). To evaluate the objective function for a given set of parameter values, the lumped parameter model is run only once or multiple times.
[0069] A similar personalization approach may be applied for the model configuration in Figure 5. Different parameters may be personalized for the 3D ventricle models (e.g. maximum active force and passive biomechanical tissue properties). Besides the optimization-based method of Figure 7, other methods may be used for fully automated iterative calibration. Fitting-based or surrogate model approaches may be used. For any of these methods, the number of parameters to be estimated may be either smaller, equal, or larger than the number of objectives or measures from the patient.
[0070] The cuff pressures (e.g., measured at the arm) used for personalization may be further adapted before being used as objectives in the parameter estimation procedures. A transfer function estimates the central arterial pressure from the measured cuff pressure.
[0071] Generally the parameter estimation problem may be formulated as:

where R, B and L are three parameters given by the blood properties and the geometry of the valve:

1. A method for personalized whole-body circulation calculation, the method comprising:

capturing cardiovascular spatial data of a patient with a medical scanner;

capturing pressure data of the patient with a pressure sensor;

measuring a cardiac hemodynamic parameter from the cardiovascular spatial data;

indicating the metric on a display for the patient.

performing a sensitivity analysis of parameters of the multi-scale whole body circulation model for the patient;

personalizing a sub-set of the parameters selected based on the sensitivity analysis; and

running a forward model of the multi-scale whole body circulation model with the personalized parameters of the sub-set.

13. The method of claim 12 wherein personalizing comprise solving for the parameters based on a difference between measured and modeled values. 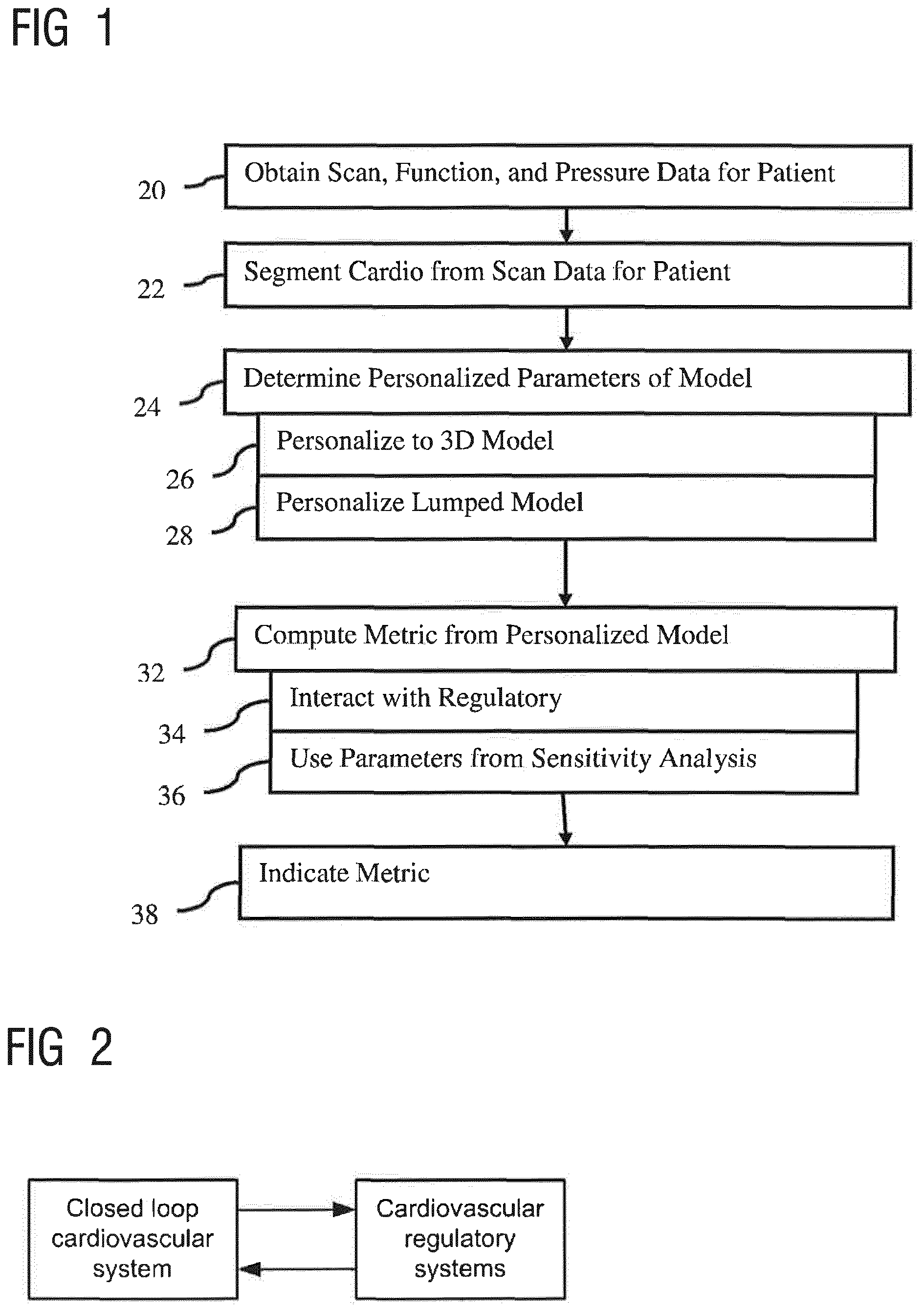 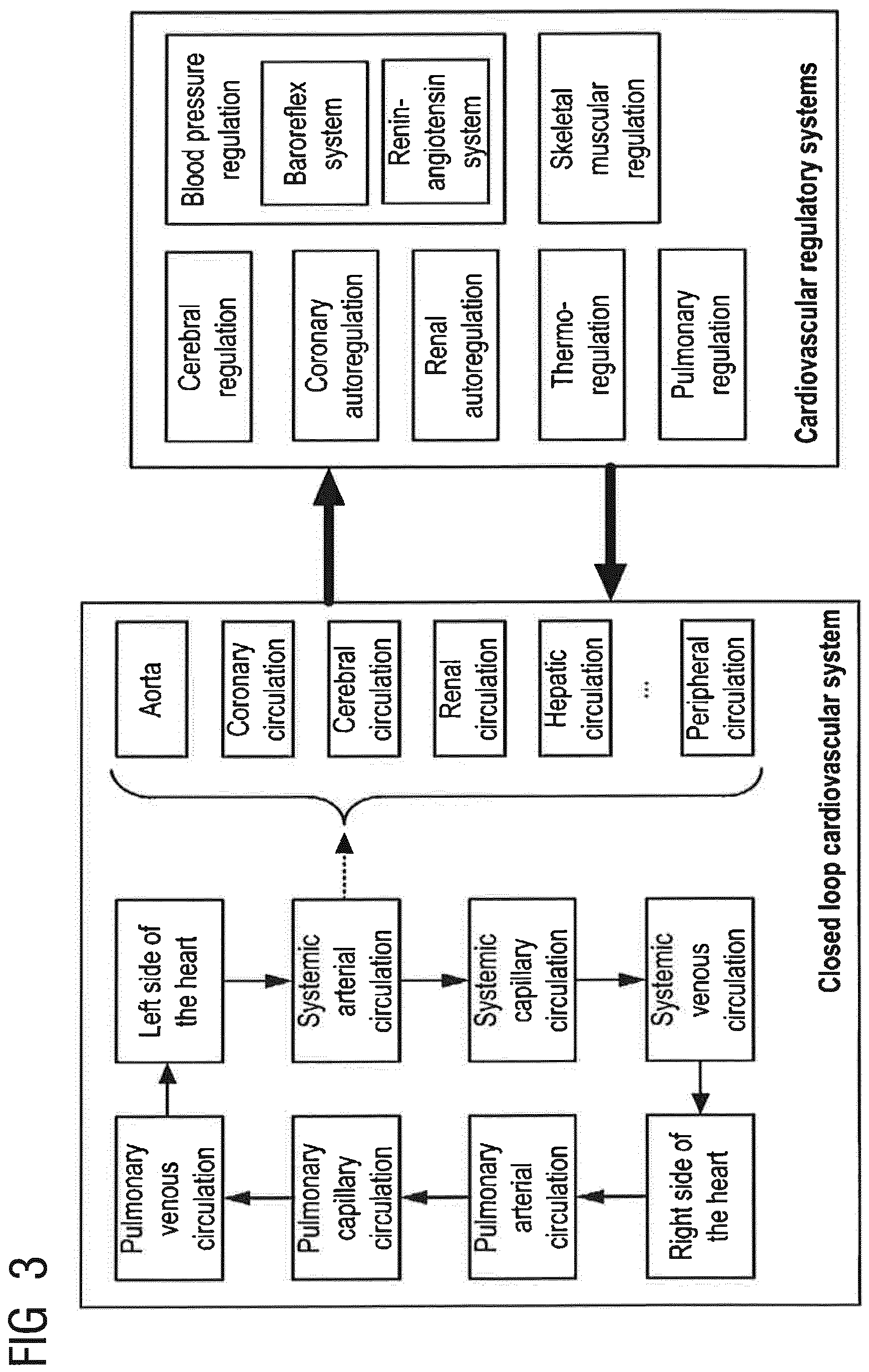 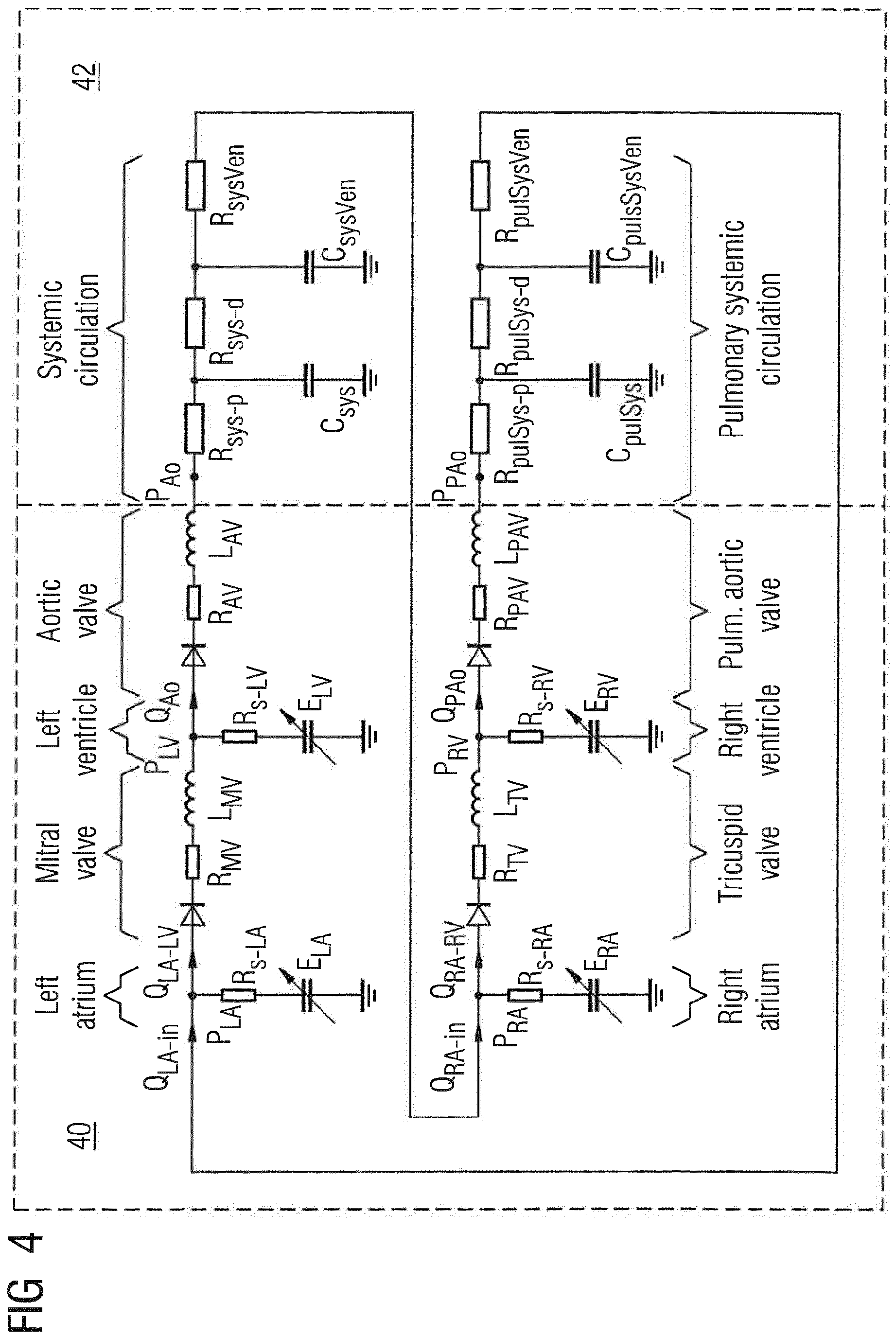 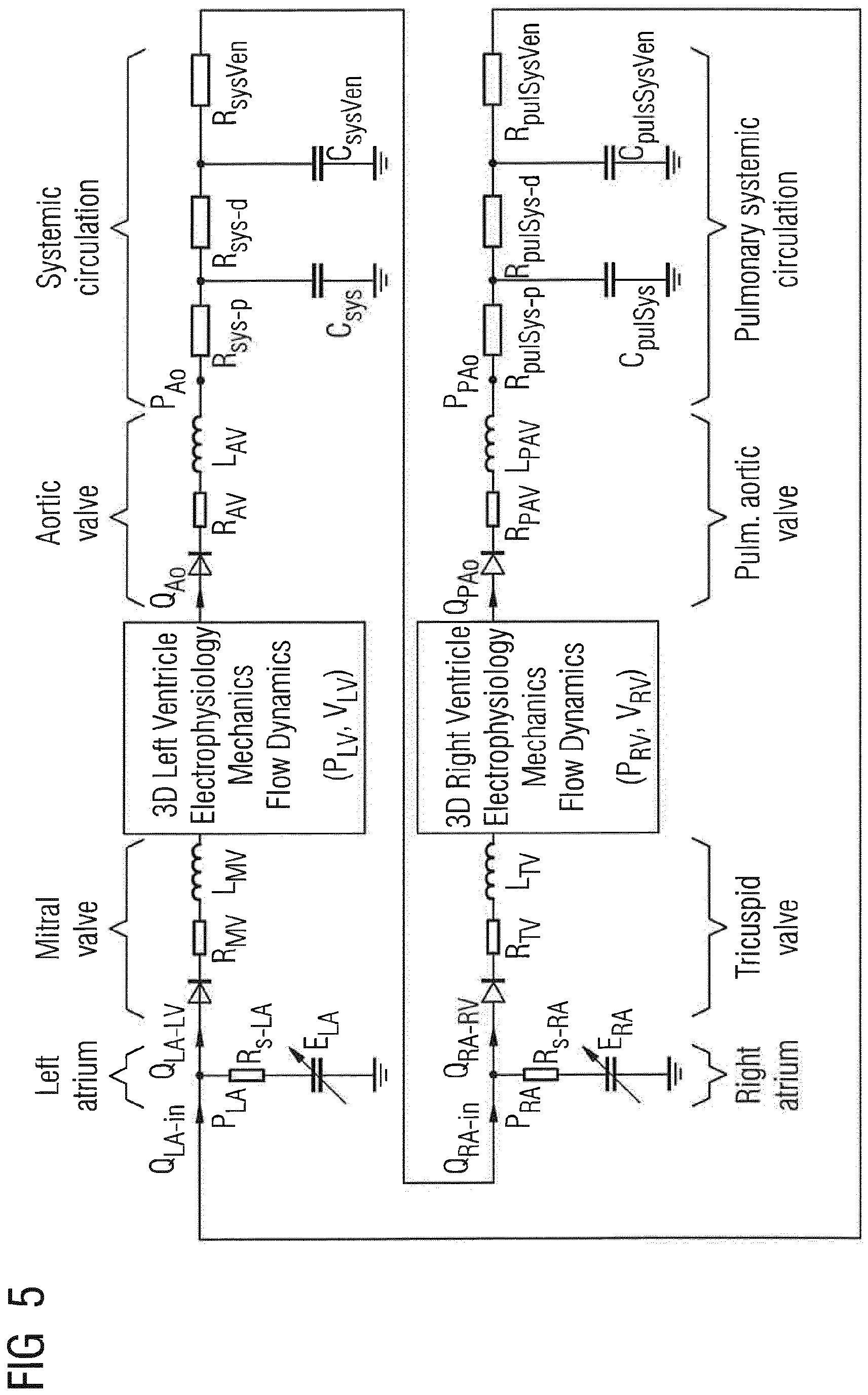 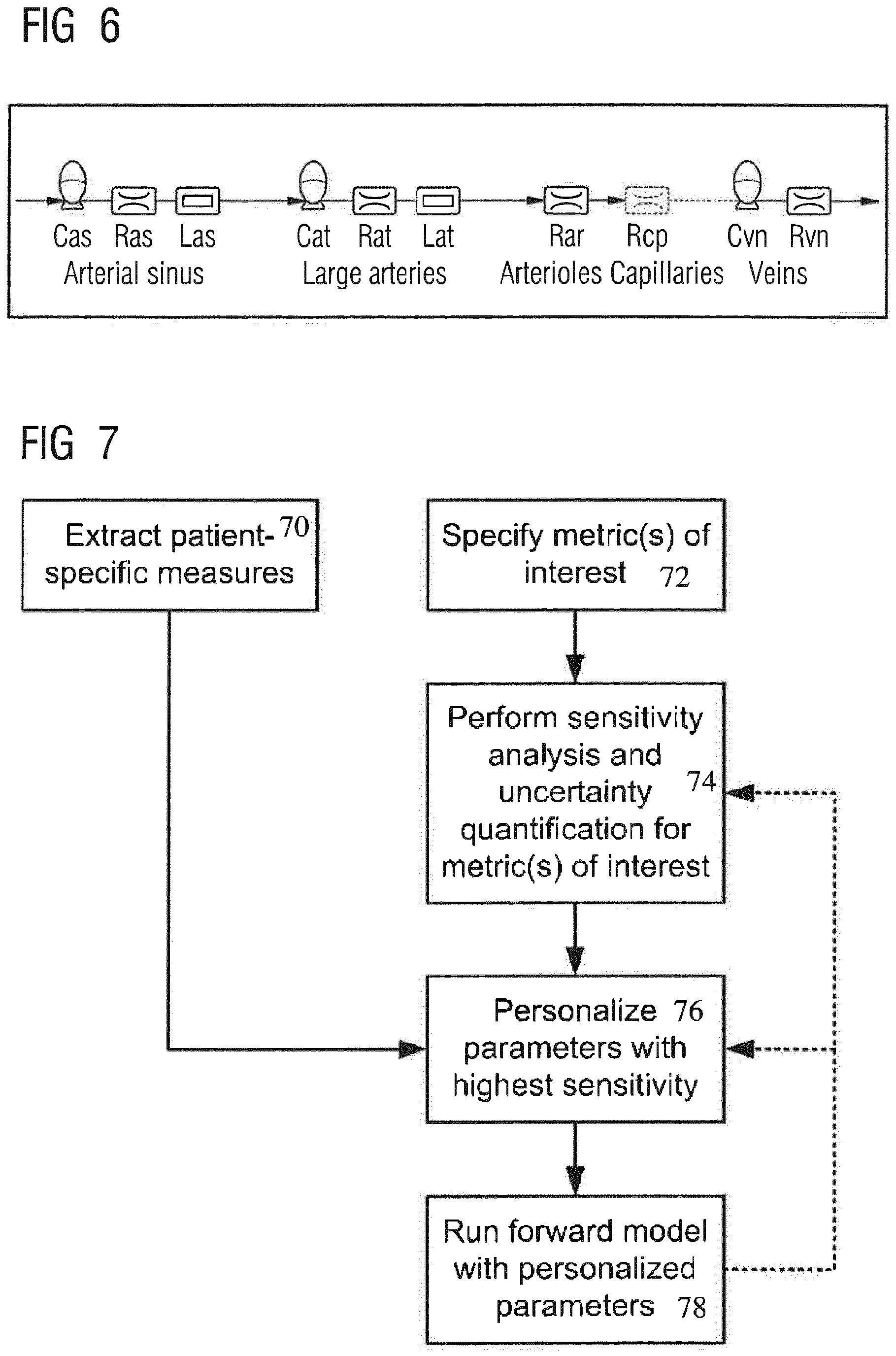 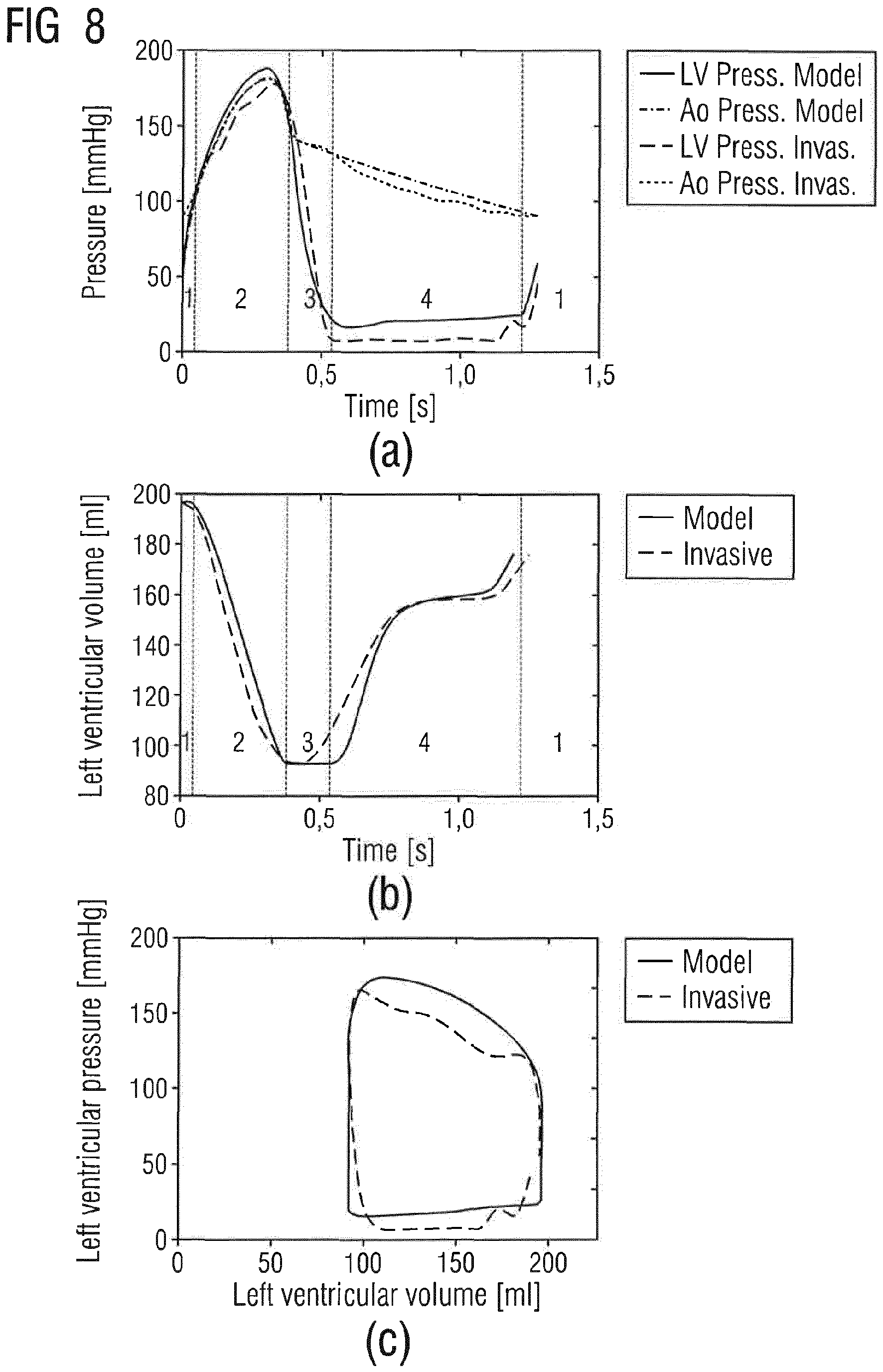 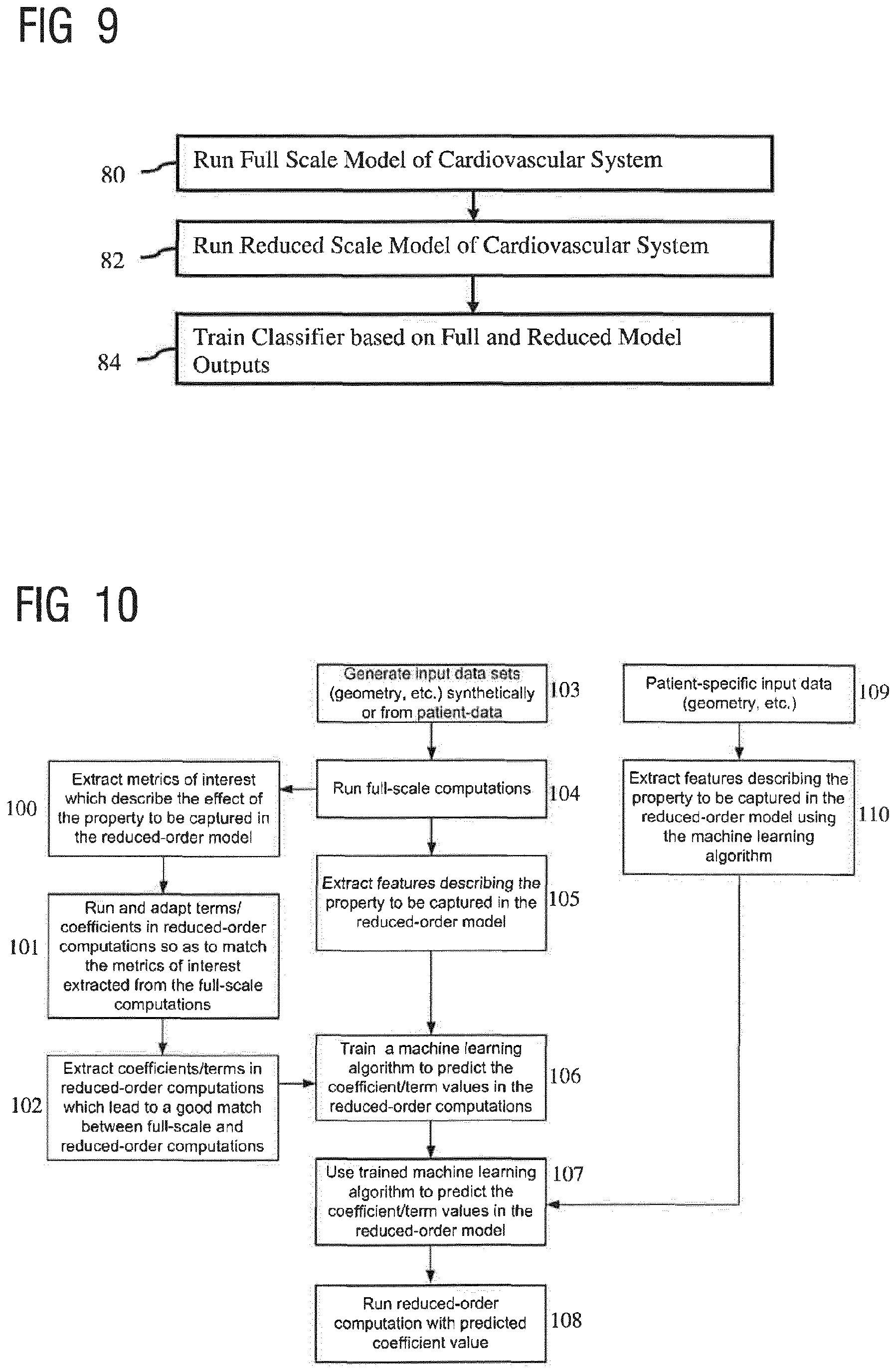 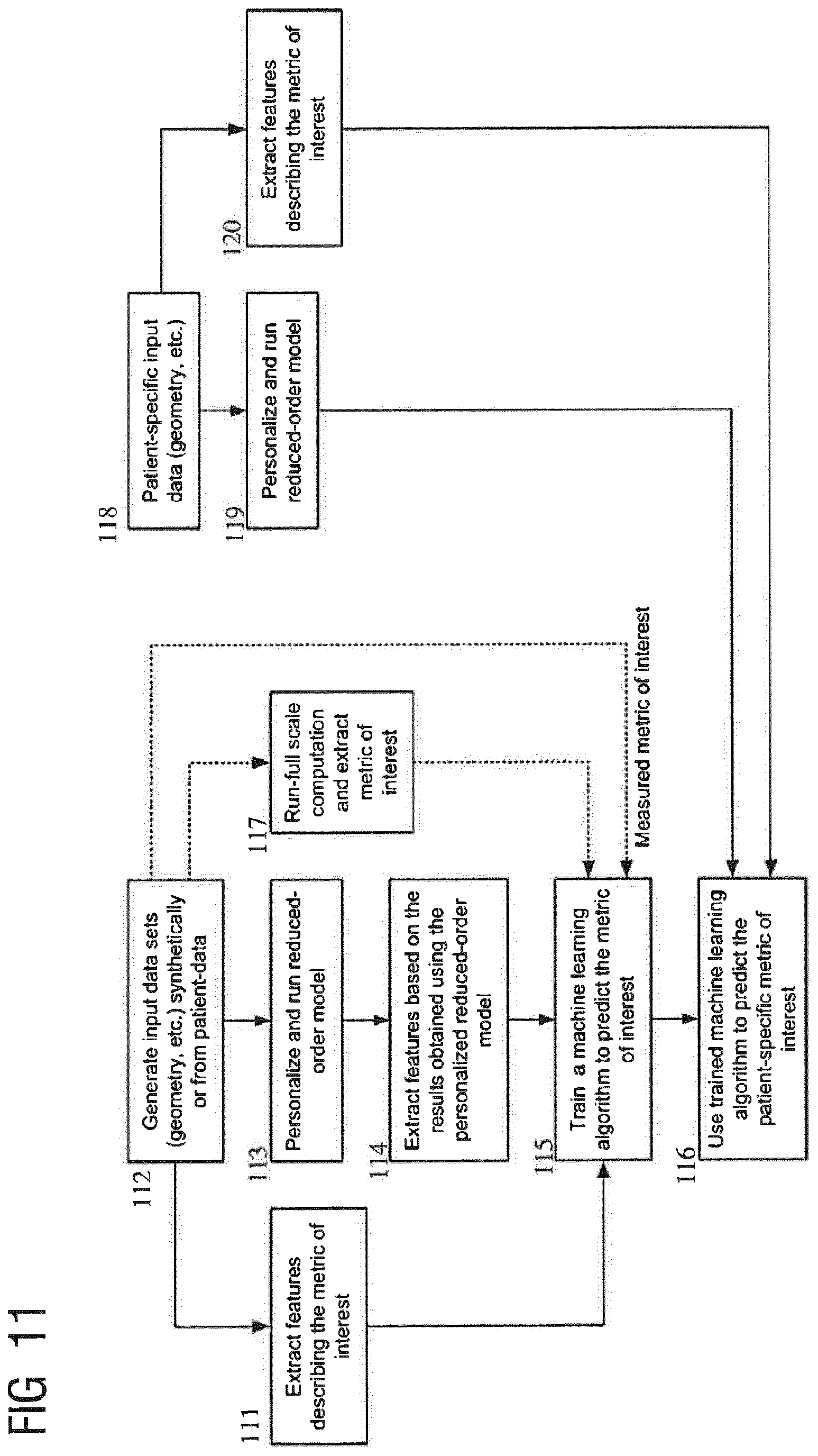 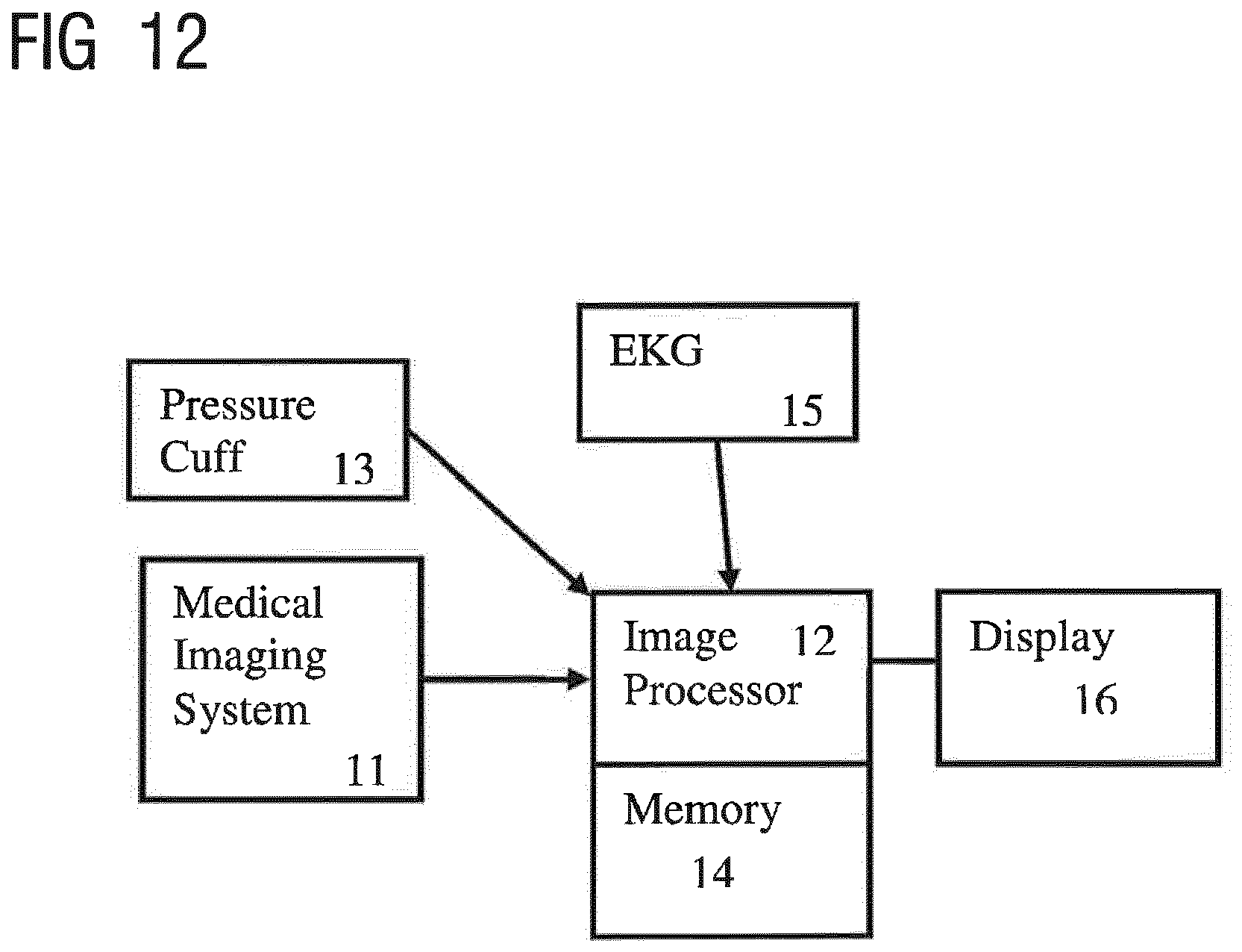