[0001] Hepatitis B is an infectious inflammatory illness of the liver caused by the hepatitis B virus (HBV). The infection is often asymptomatic, but chronic infection can lead to scarring of the liver and ultimately to cirrhosis, which is generally apparent after many years. In some cases, those with cirrhosis will go on to develop liver failure, liver cancer or life-threatening esophageal and gastric varices.
[0002] The development of liver fibrosis is a critical event in the natural history of chronic hepatitis B virus infection. Fibrosis is the predominant cause of morbidity and mortality from this disease and is responsible for the development of liver decompensation, hepatocellular carcinoma and death in a percentage of chronically-infected individuals.
[0003] Nonalcoholic steatohepatitis or NASH is a common, often "silent" liver disease. It resembles alcoholic liver disease, but occurs in people who drink little or no alcohol. The major feature in NASH is fat in the liver, along with inflammation and damage. Most people with NASH feel well and are not aware that they have a liver problem. Nevertheless, NASH can be severe and can lead to cirrhosis, in which the liver is permanently damaged and scarred and no longer able to work properly. NASH can slowly worsen, causing scarring or "fibrosis" to appear and accumulate in the liver. As fibrosis worsens, cirrhosis develops; the liver becomes scarred, hardened, and unable to function normally.
[0004] Liver fibrosis is characterized and defined by the accumulation of fibrous tissue in the liver. Formation of fibrous scar tissue is a normal bodily response to injury, but in fibrosis this healing process goes wrong. When hepatocytes (functional liver cells) are injured due to infection with a virus, heavy alcohol consumption, toxins, trauma, or other factors, the immune system is activated to repair the damage. The injury or death (necrosis) of hepatocytes stimulates inflammatory immune cells to release cytokines, growth factors, and other chemicals. These chemical messengers direct support cells in the liver called hepatic stellate cells to activate and produce collagen, glycoproteins (such as fibronectin), proteoglycans, and other substances. These substances are deposited in the liver, causing the build-up of extracellular matrix (nonfunctional connective tissue). At the same time, the process of breaking down or degrading collagen is impaired. In a healthy liver, the synthesis (fibrogenesis) and breakdown (fibrolysis) of matrix tissue are in balance. Fibrosis occurs when excessive scar tissue builds up faster than it can be broken down and removed from the liver.
[0005] Wnt/β-catenin signaling is emerging as a forerunner for its critical roles in many facets of human biology. This signaling pathway has roles in embryogenesis, organogenesis, and maintaining tissue and organ homeostasis, and also in pathological conditions such as cancer and other human disorders such as inflammatory disorders and fibrosis. In liver, it is integral in several physiological events such as development, regeneration, and growth. However, aberrant activation of this pathway is also evident in many different tumors of the liver, and recent studies are beginning to identify its role in additional hepatic pathological conditions. It contributes to liver physiology and pathology by regulating various basic cellular events, including differentiation, proliferation, survival, oxidative stress, morphogenesis, and others.
[0006] The role of Wnt/β-catenin signaling is also becoming evident in stellate cells. Although expression of β-catenin in cell-cell contacts of stellate cells is known, nuclear and cytoplasmic β-catenin was reported during liver regeneration more recently. Stellate cell activation is implicated in liver fibrosis in multiple conditions including alcoholic steatohepatitis, non-alcoholic steatohepatitis, and viral hepatitis and as a consequence of metabolic liver diseases. Studies are now beginning to investigate the role of Wnt/β-catenin signaling in stellate cell activation. Recently, DNA microarray analysis of quiescent and activated rat hepatic stellate cells showed upregulation of genes involved in the non-canonical Wnt pathway, but an absence of β-catenin activation. Although this needs to be further characterized, another study examining absence or presence of all Wnt and frizzled genes showed no difference in their overall expression in active or resting stellate and Kupffer cells. However, this study identified the presence of Fzb (sFRP1) only in the activated cells, suggesting modulation of Wnt signaling during stellate or Kupffer cell activation (Thompson, M. and Monga, S., Hepatology 45: 1298-1305, 2007).
[0007] Activation of hepatic stellate cells (HSC), a key event in liver fibrosis, is caused by diminished adipogenic transcription. Recent studies have investigated whether Wnt signaling contributes to "antiadipogenic" activation of HSC and liver fibrogenesis (Cheng J. et al., Am. J. Physiol. Gastrointest. Liver Physiol. 294:G39-G49, 2008). In these studies, culture-activated HSC from normal rats and HSC from cholestatic rat livers were examined for expression of Wnt, Frizzled (Fz) receptors, and coreceptors by quantitative PCR. Wnt signaling was assessed by nuclear beta-catenin and T cell factor (TCF) promoter activity. Dickkopf-1 (Dkk-1), a Wnt coreceptor antagonist, was transduced by an adenoviral vector to assess the effects of Wnt antagonism on culture activation of HSC and cholestatic liver fibrosis in mice. Messenger RNA for canonical (Wnt3a and 10b) and noncanonical (Wnt4 and 5a) Wnt genes, Fz-1 and 2, and coreceptors [low-density lipoprotein-receptor-related protein (LRP)6 and Ryk] are increased approximately 3 to 12-fold in culture-activated HSC compared with quiescent HSC. The nuclear beta-catenin level and TCF DNA binding are markedly increased in activated HSC.
[0008] TCF promoter activity is stimulated by Wnt1 but inhibited by Chibby, a protein that blocks beta-catenin interaction with TCF, and by Dkk-1. Dkk-1 enhances peroxisome proliferator-activated receptor-gamma (PPAR-gamma)-driven PPAR response element (PPRE) promoter activity, a key adipogenic transcriptional parameter, abrogates agonist-stimulated contraction, and restores HSC quiescence in culture. High expression of Dkk-1 increases apoptosis of cultured HSC. Expression of Wnt and Fz genes is also induced in HSC isolated from experimental cholestatic liver fibrosis, and Dkk-1 expression ameliorates this form of liver fibrosis in mice. Thus, antiadipogenic Wnt signaling in HSC activation, and therapeutic potential of Wnt antagonism for liver fibrosis, has been identified (Cheng J. et al., Am. J. Physiol. Gastrointest. Liver Physiol. 294:G39-G49, 2008).

BRIEF SUMMARY OF THE DISCLOSURE

[0009] This disclosure presents methods of treating hepatic fibrosis resulting from steatohepatitis, including hepatic fibrosis associated with non-alcoholic steatohepatitis (NASH), by administration of an inhibitor of β-catenin signaling selected from 4-(((6S,9S,9aS)-1-(benzylcarbamoyl)-2,9-dimethyl-4,7-dioxo-8-(quinolin-8-ylmethyl)octahydro-1H-pyrazino[2,1-c][1,2,4]triazin-6-yl)methyl)phenyl dihydrogen phosphate, or (6S,9S,9aS)-N-benzyl-6-(4-hydroxybenzyl)-2,9-dimethyl-4,7-dioxo-8-(quinolin-8-ylmethyl)octahydro-1H-pyrazino[2,1-c][1,2,4]triazine-1-carboxamide.

[0011] Non-peptide compounds have been developed which mimic the secondary structure of reverse-turns found in biologically active proteins or peptides. For example, U.S. Pat. No. 5,440,013 and published PCT Applications Nos. WO94/03494, WO01/00210A1, and WO01/16135A2 each disclose conformationally constrained, non-peptidic compounds, which mimic the three-dimensional structure of reverse-turns. In addition, U.S. Pat. No. 5,929,237 and its continuation-in-part U.S. Pat. No. 6,013,458, disclose conformationally constrained compounds which mimic the secondary structure of reverse-turn regions of biologically active peptides and proteins. In relation to reverse-turn mimetics, conformationally constrained compounds have been disclosed which mimic the secondary structure of alpha-helix regions of biologically active peptide and proteins in WO2007/056513 and WO2007/056593.
[0012] This disclosure provides compounds, pharmaceutical compositions and methods of treatment for hepatic fibrosis resulting from steatohepatitis. The inventors have determined that inhibiting β-catenin signaling is an effective approach to the treatment of fibrotic liver diseases.
[0013] Structures and compounds of the alpha helix mimetic β-catenin inhibitors are disclosed in WO 2010/044485, WO 2010/128685, WO 2009/148192, and US 2011/0092459.
[0014] The alpha helix mimetic β-catenin inhibitor compound of the present invention is selected from:

[0055] Study groups. A summary of the treatment schedule is provided in Table 1.

Group 1: Normal. Eight normal mice were fed normal diet ad libitum without any treatment from 9 to 12 weeks of age.

Group 2: Disease-control. Eight NASH mice were fed HFD ad libitum without any treatment from 9 to 12 weeks of age.

Group 3: Telmisartan. Eight NASH mice were orally administered pure water supplemented with Telmisartan at a dose of 10 mg/kg daily from 9 to 12 weeks of age.

Group 4: Vehicle. Eight NASH mice were subcutaneously administered the vehicle (phosphate buffered saline) by continuous infusion via osmotic pumps at a rate of 0.11 µL/hr from 9 to 13 weeks of age.

Group 5: Compound A low dose. Eight NASH mice were subcutaneously administered the vehicle supplemented with Compound A by continuous infusion via osmotic pumps at a dose of 1 mg/kg/day from 9 to 13 weeks of age.

Group 6: Compound A high dose. Eight NASH mice were subcutaneously administered the vehicle supplemented with Compound A by continuous infusion via osmotic pumps at a dose of 3 mg/kg/day from 9 to 13 weeks of age.

[0056] Animal monitoring and sacrifice. The viability, clinical signs and behavior were monitored daily. Body weight was recorded daily before drug administration. Mice were observed for significant clinical signs of toxicity, moribundity, and mortality approximately 60 minutes after each administration. The animals were sacrificed by exsanguination through direct cardiac puncture under ether anesthesia (Wako Pure Chemical Industries).

1. An alpha helix mimetic β-catenin inhibitor compound for use in the treatment of hepatic fibrosis, selected from:

2. The compound for use of claim 1, wherein the hepatic fibrosis results from non-alcoholic steatohepatitis (NASH). 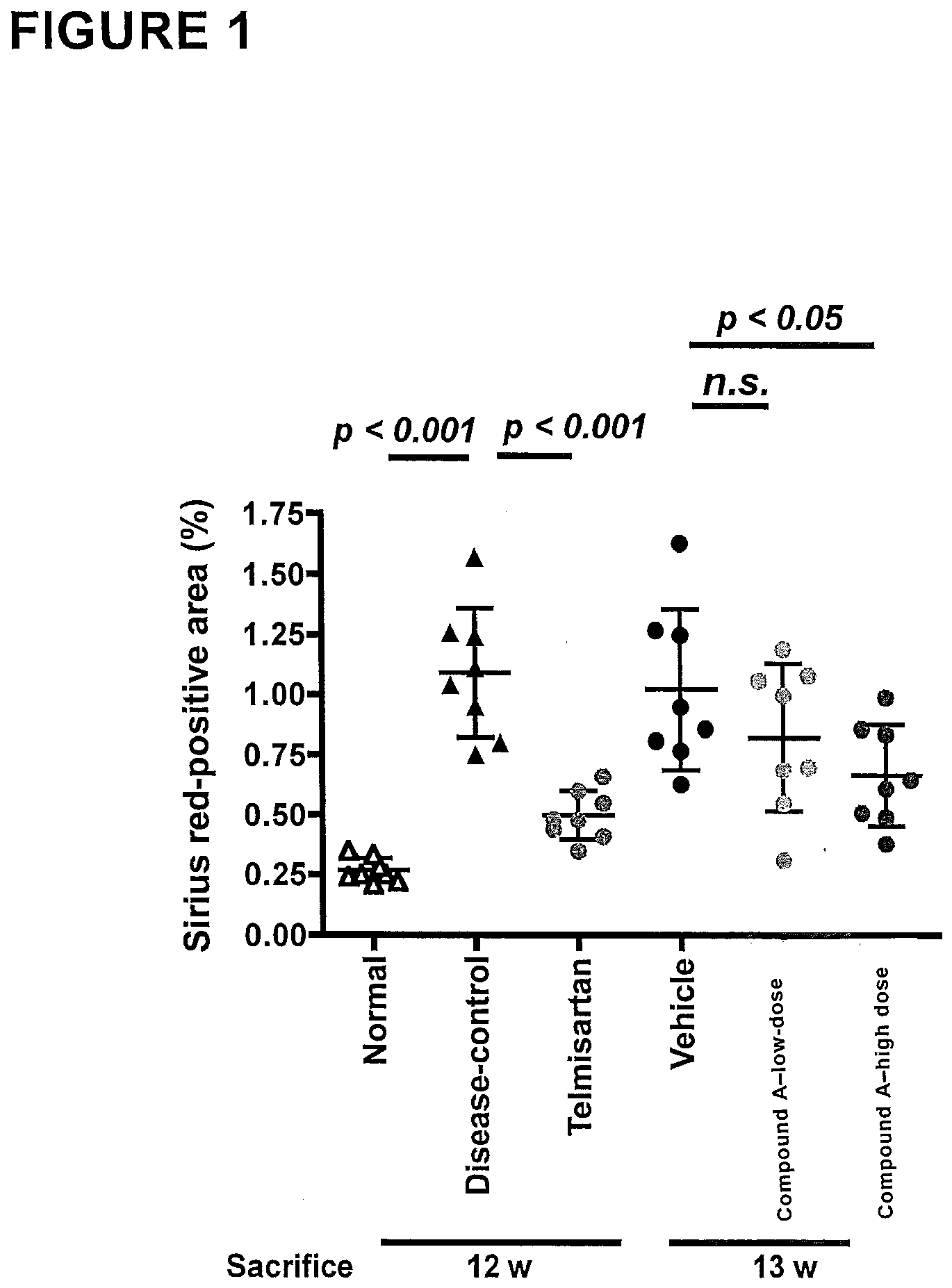