[0003] The accompanying drawings, which are incorporated into and constitute a part of this specification, illustrate one or more embodiments of the present disclosure and, together with the description of example embodiments, serve to explain the principles and implementations of the disclosure.

FIG. 1 illustrates an overview of one embodiment of a SDR guided VDR grading system.

FIG. 2 shows an overview of one embodiment of spatial alignment.

FIG. 3 shows an overview of the main steps of one embodiment of automatic re-mastering.

FIG. 4 illustrates an example of inverse tone mapping and color gamut according to an embodiment of the present invention.

FIG. 5 illustrates an example of handling of special regions according to an embodiment of the present invention.

[0051] One of the concepts underlying automatic re-mastering (e.g., 120) is that all the raw information may be available in the ungraded original, and the graded SDR can provide a way on how color correction is performed when the target display is SDR display. Although the SDR and the VDR display might have different dynamic range and color gamut, the director's intention can be kept the same for those colors within the range of 3D color gamut. In the cases when the graded SDR image has color clipping due to its limited dynamic range and color gamut, the lost information could be recovered from the ungraded original. Another possible advantage is that when there is a different edit decision between SDR and VDR, the same director's intention could be applied to the new content. For example, the VDR image might have a different edit to better tell the story, or have a different cropping or spatial format.
[0052] In some embodiments, an inverse tone mapping and a gamut mapping are applied first to the graded SDR, given the information about the dynamic range and color gamut of the target VDR master. After mapping step, the color transformation can be modeled between the ungraded original and the inverse mapped result, where the clipped areas will become outliers of the estimated transformation due to clipping. The modeled color transformation can then be applied back to the ungraded original to obtain a re-mastering result.
[0053] FIG. 3 shows an overview of the main steps of one embodiment of automatic re-mastering, for a specific case where the SDR content is a 100 cd/m2 (nits) Rec709 version, and the output VDR content is a 4000 cd/m2 (nits) P3 version.
[0054] A graded SDR image, 100 nits Rec709, (305) is provided. Inverse tone mapping and color gamut mapping (310) are applied to image (305), thereby obtaining an inverse mapped image (315).
[0055] The ungraded original image (320) can then be used for spatial alignment (325). A global color transformation estimation (330) is obtained from the mapped image (315) and the ungraded alignment (325). VDR-specific editing (340) can also be performed on the ungraded original (320). The VDR-specific edited image could be a spatially and temporally aligned ungraded original, or a version with different cropping or a different cut.
[0056] A color transformation function (335) is obtained after the estimation (330), and a color transfer can be applied (345). A VDR master version (350), 4000 cd/ m2 (nits) P3 in this example, is obtained as output of the process in FIG. 3.
[0057] In other embodiments, the inverse tone mapping and color gamut mapping can be further illustrated as in FIG. 4.
[0058] The input in the example of FIG. 4 is a SDR image (405), 100 cd/m2 (nits) Rec709 with gamma 2.4. In a first step gamma decoding (410) is performed to obtain a linear RGB image. Then color space conversion is applied to IPT space (415). In some embodiment, PQ encoding may be used for the values in IPT space.
[0059] An inverse tone mapping curve (425) can then be applied to the SDR content. Afterwards, saturation correction (430) can be applied and the colors can be converted back to RGB space with P3 gamma 2.4 (435), thereby obtaining a VDR graded image (440).
[0060] As understood by the person skilled in the art, any inverse tone mapping and gamut mapping can be used in the systems and methods of the present disclosure, to obtain an inverse mapped image version from the graded SDR image. The inverse mapping will not recover the lost information due to clipping of the dynamic range and the color gamut. However, since the appearance of an image in its inverse mapped version will be similar to the graded SDR version, the inverse mapped image can clarify the director's intention for color grading. The director's intention can be used to guide the global color grading process from the ungraded original, where that lost information is still available.

[0061] Given a set of corresponding colors between an ungraded original image and an inversely mapped image, it is possible to estimate a global color transformation using the RANSAC method. Before applying RANSAC, the corresponding colors to be used need to be determined first, as well as a color transformation model. In one embodiment, an adaptive sampling scheme can be applied, to obtain a subset of corresponding colors. Since the images are temporally and spatially aligned, each pair of pixels within the entire scene could provide a pair of corresponding colors. However, there may be too many pixel pairs and using all of them would be redundant, thus a sampling may be advantageous. At the same time, the distribution of the intensity is content-dependent. It would be advantageous to model the global color transformation accurately across all luminance levels, hence several embodiments of the present disclosure can apply an adaptive sampling scheme to sample the corresponding colors so that the resulting samples have a near-uniform distribution of intensity. This way, the estimated curves would have better performance in those regions where the original distribution is low, for example at the high end and low end of the intensity range.
[0062] After the sampled pairs of corresponding colors are obtained, a global transformation model needs to be determined. The chosen model may be suited for fitting the data in an optimal way. In one embodiment, three one-dimensional curves are employed to model the color transformation in three different color components. In this embodiment, each of the three curves is employed to fit one of the three color component. Each one-dimensional function could be parametric. For example, a polynomial, piecewise polynomial, or other functions may be used, as understood by the person skilled in the art. A model based on a look-up table may also be used, for example with cubic interpolation between the look-up entries for each one dimensional fitting function.
[0063] In certain situations, the one dimensional functions may not have the desired accuracy. In this case, more complex models may be used. For example, the global color transformation may be modeled with a 3 x 3 linear matrix transformation, followed by three one-dimensional curves. In several embodiments, RANSAC may be used to estimate the global color transform once the data set and transformation model are determined.
[0064] One advantage of applying RANSAC to fit a model comprises its robustness to outliers. This may be relevant as there may be outliers in fitting a model. For example, clipped colors due to limited dynamic range and color gamut may be outliers to the model. After applying the estimated color transform back to the ungraded original image, these outliers may be color-graded correctly again.

providing, by a computer, an ungraded image (105);

providing, by a computer, a color graded lower dynamic range image (125) representing the same material as the ungraded image; and

detecting, by a computer, feature points in the ungraded image and in the color graded lower dynamic range image;

matching, by a computer, the feature points; and

estimating, by a computer, a transformation between the ungraded image and the color graded lower dynamic range image, based on the matching of the feature points. 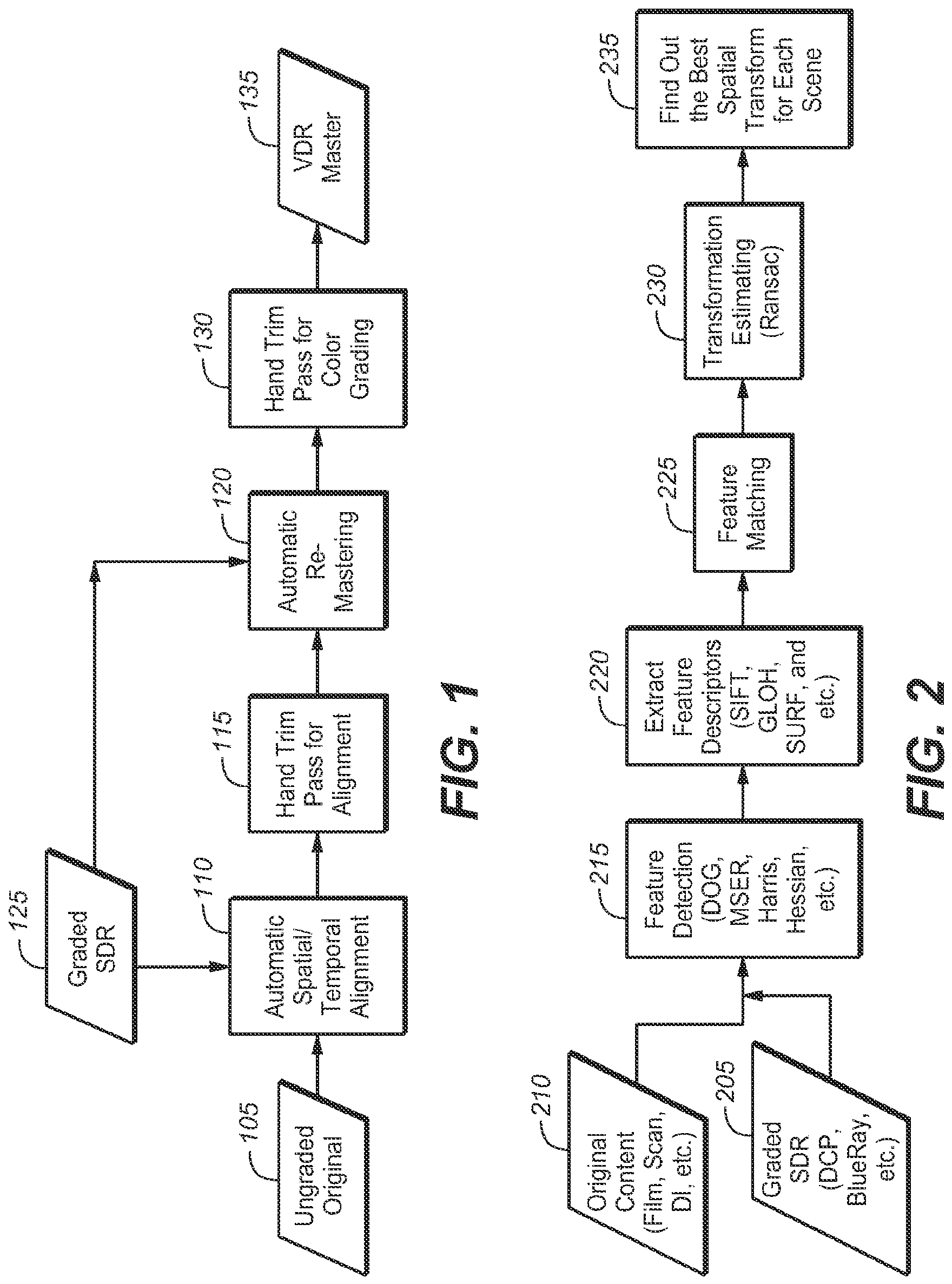 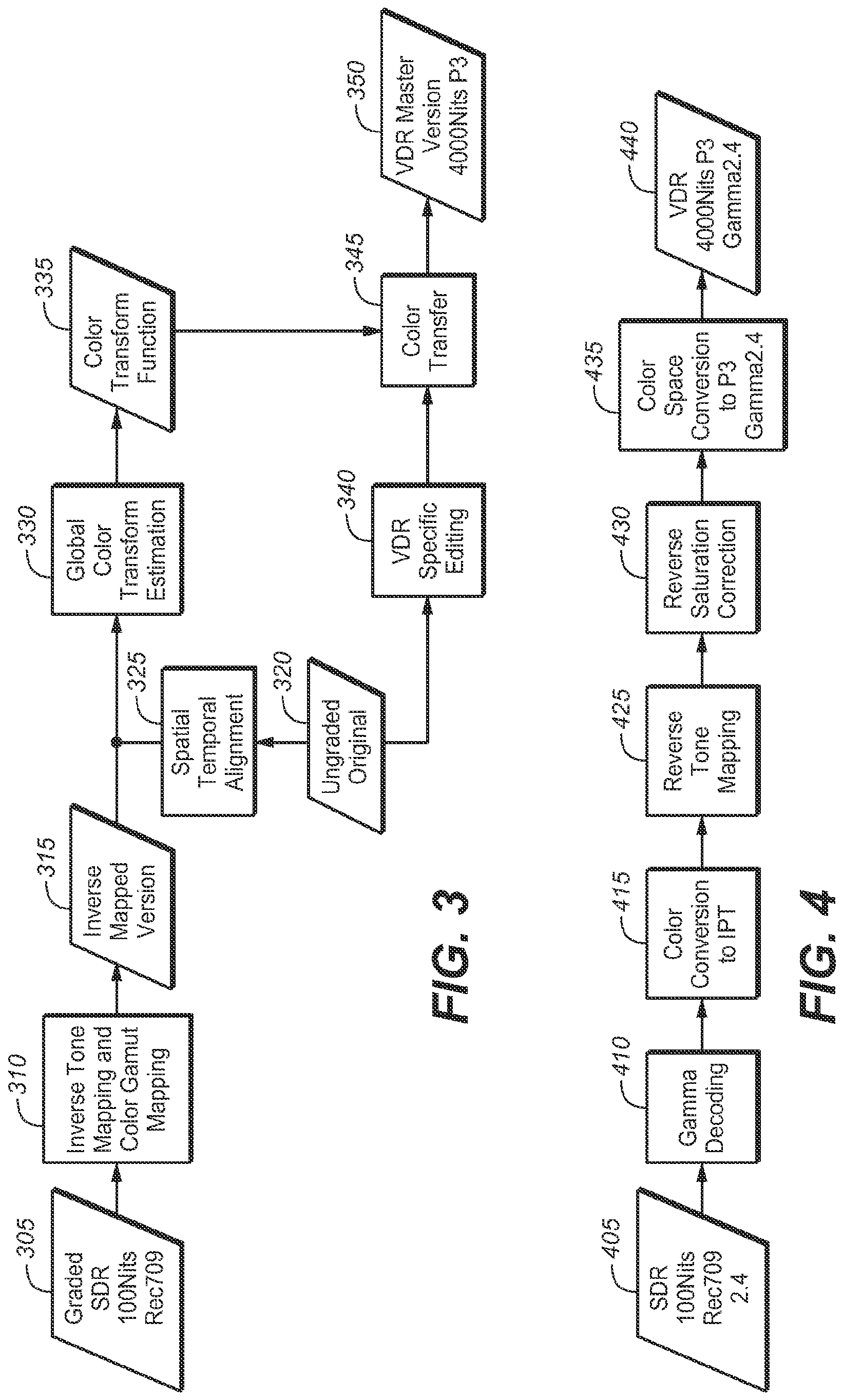 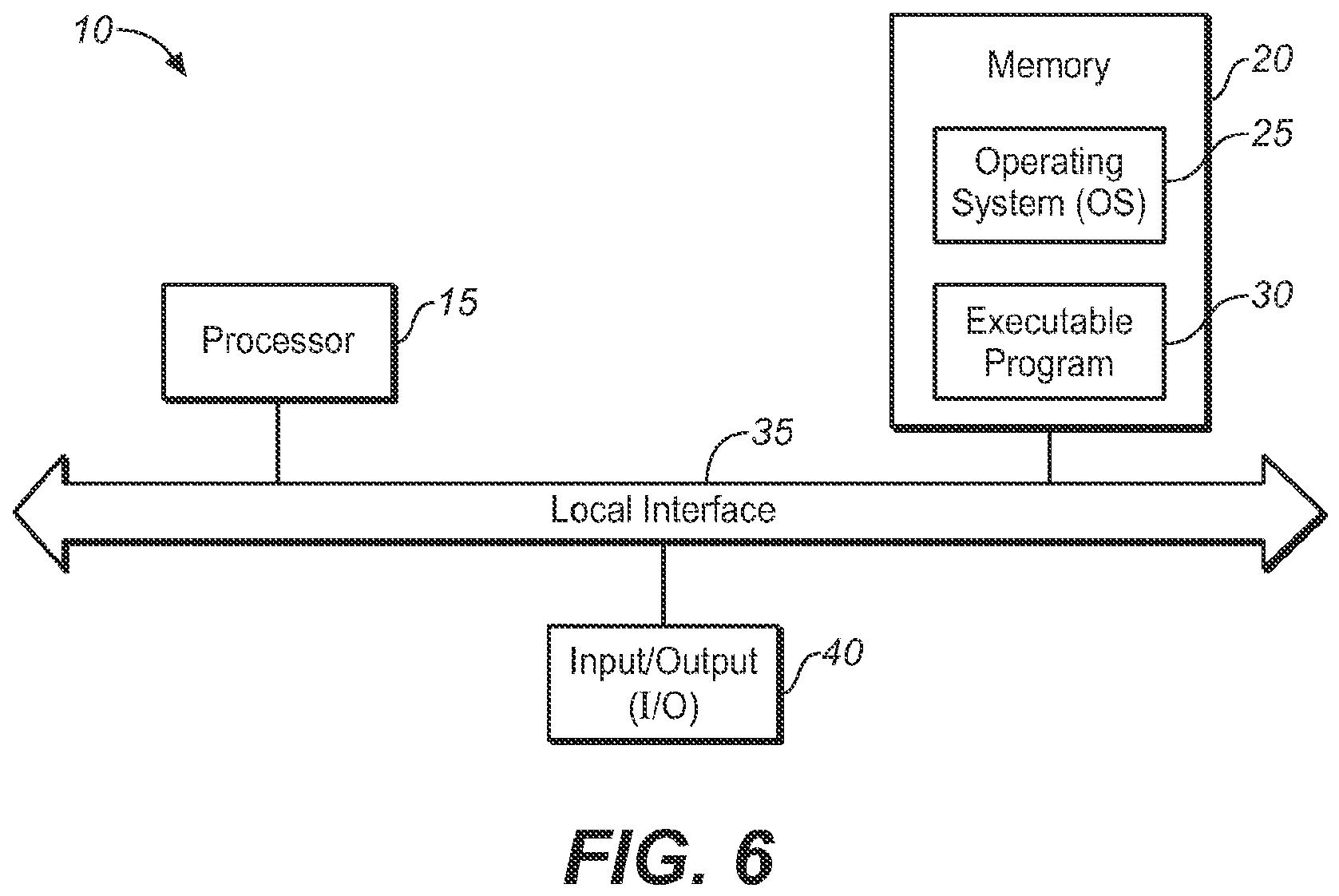