Figure 1 shows a cross-sectional view of an embodiment of an exhaust gas turbocharger according to the invention,

Figure 2 shows a schematically highly-simplified representation of a plain bearing according to the invention,

Figure 4 shows a representation corresponding to Figure 2 of another embodiment of the plain bearing according to the invention, and

Figure 5 shows a schematically simplified perspective representation of a plain bearing according to the prior art.

[0022] Figure 1 shows a schematically slightly simplified representation of an exhaust gas turbocharger 1. Exhaust gas turbocharger 1 comprises a turbine housing 5 and a compressor housing 9. Turbine housing 5 and compressor housing 9 are connected to each other via a bearing housing 8. A compressor rear wall 4 forms the turbine-side connection of compressor housing 9. A compressor wheel 2 is located in compressor housing 9. A turbine wheel 6 is arranged in turbine housing 5. Compressor wheel 2 is arranged rotationally fixed on one end 10A of a shaft 10 and turbine wheel 6 is arranged rotatably fixed on an end 10B of shaft 10. Shaft 10 is mounted radially in a bearing housing 8 via a bearing arrangement 7, which has in the exemplary case bearing bushes 7A and 7B arranged spaced apart from each other. An axial bearing arrangement 11 is provided in bearing housing 8 for axial mounting of shaft 10. Turbine wheel 6 is set into rotation via an exhaust gas flow of an internal combustion engine. Compressor wheel 2 is thus likewise set into rotation via shaft 10. By means of the compressor wheel, the charge air of an internal combustion engine may be charged.
[0023] Bearing arrangement 7 of exhaust gas turbocharger 1 according to the invention is designed as an anisotropic radial plain bearing. As explained at the beginning, the anisotropy of this radial plain bearing may be achieved on the part of the bearing, on the part of the shaft, and/or on the part of bearing housing 8. For example, the achievement of an anisotropy will be subsequently explained on the basis of different embodiments of bearing bushes of the radial plain bearing 7. To simplify the representation, the oil supply holes are not depicted in each of the bearing bushes in Figures 2 to 4. An oil supply hole, identified with reference OZB in Figure 1 is, however, representative for oil supply holes of this type, which may also be provided in the embodiments of the bearing bushes according to Figures 2 to 4, wherein one or a plurality of oil supply holes of this type is possible. For this purpose, reference may also be made to the depiction of Figure 5, to the reference OZB therein.
[0024] Figure 2 shows an embodiment of a bearing bush 15 with a center recess 16 and a center point M15, which bearing bush 15 is provided with an annular groove 17, which groove is arrange eccentrically offset to bearing bush 15 by an offset V, so that a center point M17 arises for annular groove 17. The resulting shaded area 18 illustrates the contour of annular groove 17.
[0025] Figure 3 illustrates a non-uniformly designed bearing bush 19 with a bush center point M19, a center recess 21, and an annular groove 20, and has a substantially rectangular outer edge with outer edge sections 22 to 25 designed as straight lines, which are respectively connected by rounded corner regions 26 to 29. Outer edge section 25 occupies a distance a to the circular outer circumference 30 of bearing bush 19. The number of the different insertion depths may be varied according to demand. As an example for this, a three-fold repetition of the insertion depth would be invoked across the circumference.
[0026] A tangent T1 at corner region 29 occupies a distance b to a tangent T2 which is offset parallel to T1 at the outer circumference 30 of bearing bush 19, which distance b is smaller than distance a. As a special variant, distance b may be hereby reduced to 0 so that only pockets are generated for the system on the circumference, which pockets have an insertion depth of measurement a.
[0027] Figure 4 depicts a third embodiment of a bearing bush 31 according to the invention, which has a circular outer circumference 33, a circular center recess 34, and a center point M31.
[0028] Bearing bush 31 is further provided with an annular groove 32 which is provided with at least one channel, in the example, however, with four channels 35, 36, 37, and 38, which provide the specific influences on the flow.
[0029] Channels 35 to 38 are each designed identically so that the structure thereof will be subsequently explained on the basis of channel 35. The channel is designed as an acute angle and is formed by a tangent 40 to outer circumference 39 starting from an outer circumferential line 39 of groove 32, which ends in a point 41. A return line 42 leads from point 41 back to outer circumference 39 wherein return line 42 adopts an acute angle α to tangent 40. The resulting contour of annular groove 32 is reproduced in shading and identified by reference numeral 43, wherein the contour of the annular groove in Figure 3 is designated by reference numeral 44.
[0030] As was explained at the beginning, the anisotropic design of the radial plain bearing according to the invention may also be carried out by corresponding modification to shaft 10 and/or to the inner contour of bearing housing 8 which is arranged adjacent to plain bearing 7. Accordingly, this inner contour of bearing housing 8 or the outer contour of shaft 10 may be carried out, corresponding to the depiction of Figures 2 to 4, on the outer contour in the case of shaft 10, and on the inner contour in the case of bearing housing 8, so that reference may be made to the depiction and the explanation of Figures 2 to 4 with respect to this.
[0031] In addition to the preceding written description of the invention, reference is hereby made explicitly to the graphic representation of the invention in Figures 1 to 4 as a supplemental disclosure thereto. 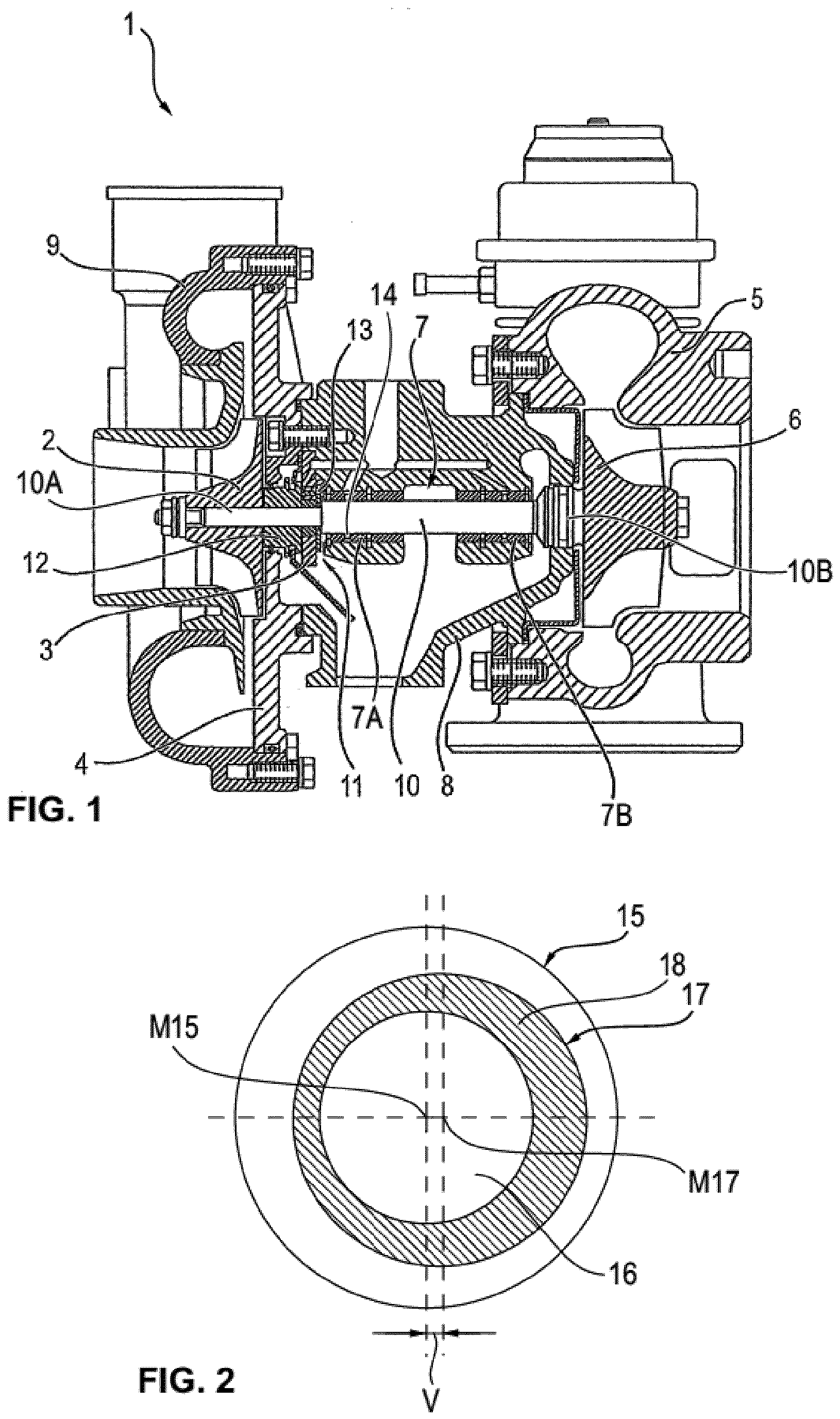 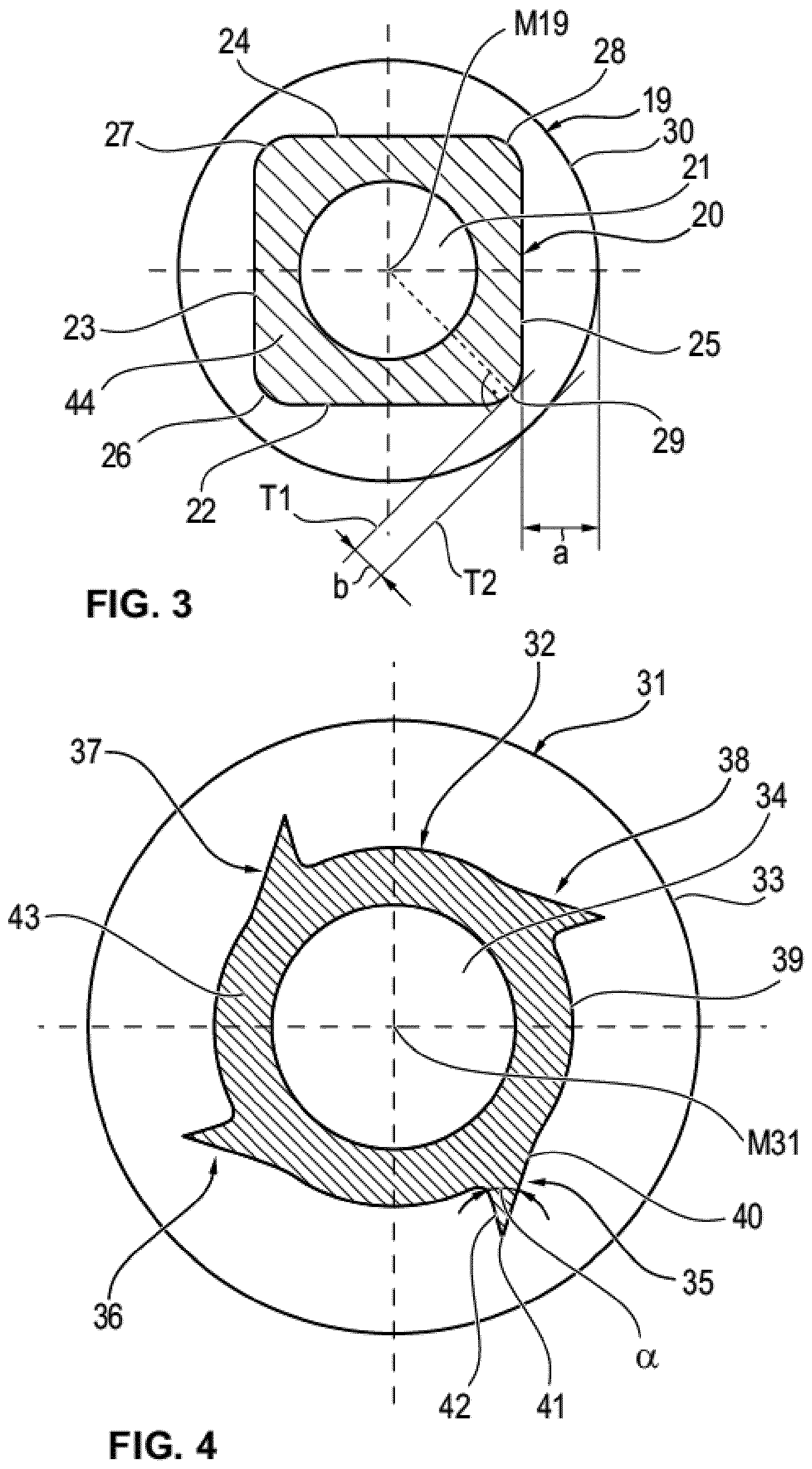 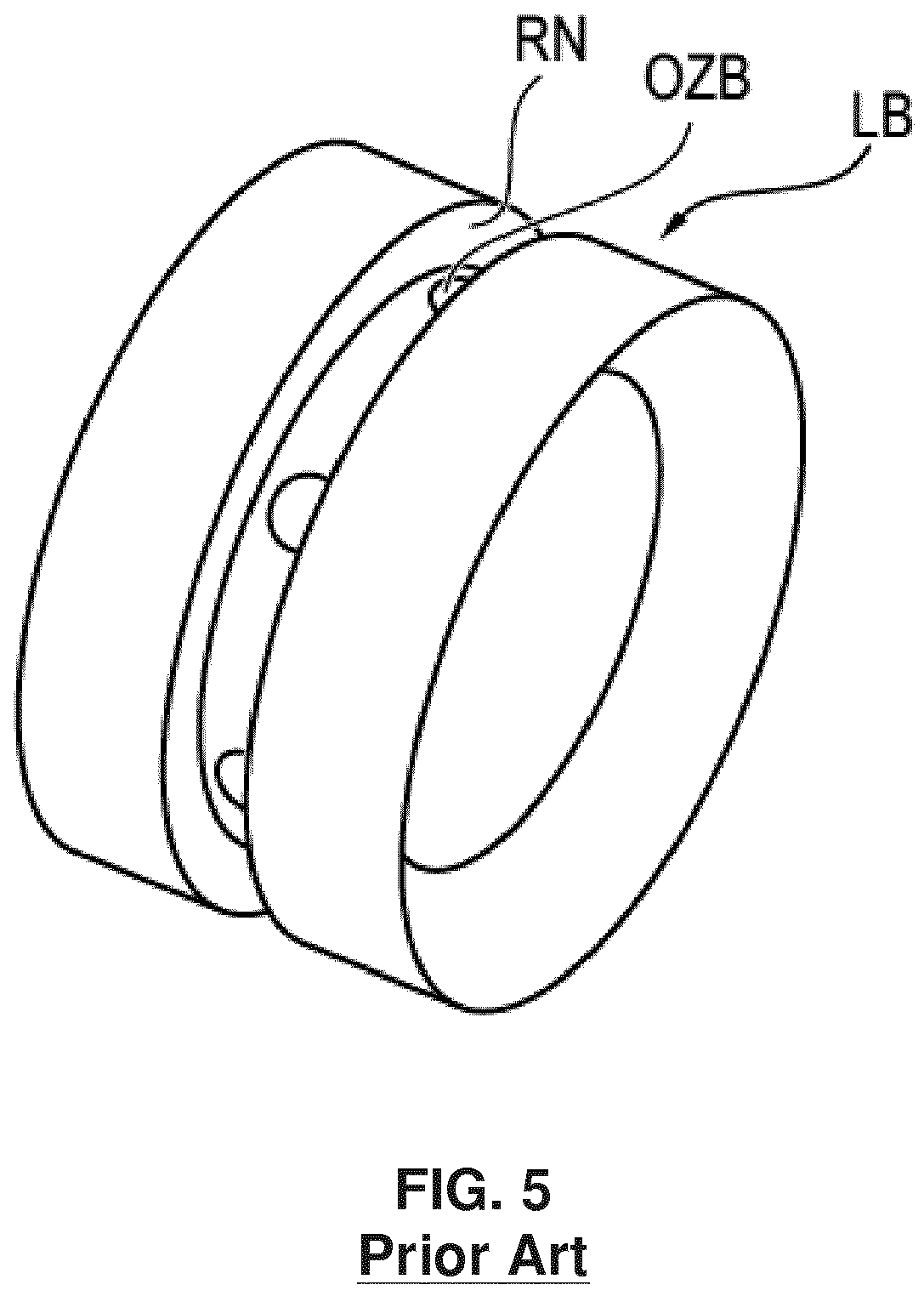