[0001] The present invention concerns a kit for conditioning and purification of explanted organs.

[0002] Despite the ongoing progress in medical treatment, the request for donor organs is always higher than their availability, due to the long waiting times. Furthermore, the percentage of organs explanted which are suitable for reimplantation can be fairly low, as in the case of lungs, in which only 20% of the lungs explanted from donors are considered suitable for transplantation. Other organs, such as the heart, liver, kidneys and pancreas, are more suitable for transplantation, however all of them, once explanted, are subject to a mechanism of deterioration which can invalidate the probability of success of the subsequent reimplant.
[0003] The damage to the organs occurs at different times, for example in the period preceding cerebral death or cardiac arrest of the potential donor, during explantation of the organ itself, during its conservation and transport or in the period preceding the reimplant operation.
[0004] The presence in the organ of inflammatory cytokines, cell elements, portions of cells and reperfusion injury, i.e. injury to an organ when the blood supply returns to the organ after a period of ischemia or in general after a lack of oxygen, are some of the main factors that cause dysfunction of the organ once transplanted and failure of the transplant itself.
[0005] The cytokines and mediators play a key role in many of the processes involved in the deterioration of an organ, such as further activation of the cytokine cascade, promotion of apoptosis, increase in leukocyte adhesion and activation of inducible nitric oxide synthase. All these inflammatory processes can play a very important role in the organ deterioration which has been observed, including oedema and microcirculatory damage.
[0006] In the case of lung transplant, the transplant is sometimes performed using the lungs of a donor after ex vivo lung perfusion (EVLP). The lungs explanted and subject to said process are healthy but temporarily deteriorated in functional terms as a result of the metabolic events connected with cerebral death (for example oedema, production of endobronchial secretions), making them unsuitable for transplantation. The technique of ex vivo lung perfusion consists essentially in cleansing of the lungs and bronchi, removing excess water in the lung tissue, and aspirating the secretions inside the bronchi. At the end of this treatment, the function of the organs can be assessed and it is therefore possible to decide whether they are suitable for transplantation.
[0007] Various devices for ex vivo perfusion of a donor organ are known on the market.
[0008] Vivoline® LS1 is an EVLP device consisting of two parts; the first part, called evaluation unit, consists of a roller pump, a heater/cooler unit and a gas circulation system. It also comprises means for setting the maximum pressure and the value of the gas flow and its temperature.
[0009] The second part, called lung chamber, consists of a container for the organ, an oxygenator, connection hoses and a leukocyte filter.
[0010] Another device for EVLP is XVIVO Organ Chamber consisting of a set of lung cannulae, one arterial and one venous, a reservoir, a heat exchanger, an oxygenator membrane, and a centrifugal pump.
[0011] Other devices for EVLP are described in M. A. Roman et al., "Ex Vivo Lung Perfusion: A Comprehensive Review of the Development and Exploration of Future Trends", Transplantation, Vol. 96, No. 6, p. 509-518, WO9630111 and WO2007111495.
[0012] Disadvantageously, said equipment does not allow elimination of cell waste, cell elements and inflammatory substances that may be present in the explanted organ and therefore flow into the perfusion liquid.
[0013] The article by T. Kakishita et al., "Suppression of Inflammatory Cytokines During Ex Vivo Lung Perfusion With an Adsorbent Membrane", The Annals of Thoracic Surgery, Vol. 89, No. 6, 2010, p. 1773-1779, discloses an ex vivo lung perfusion circuit comprising connection means to and from the lung, fluid connection means, and separation means comprising an adsorbent membrane for removing perfusate proinflammatory cytokines and a leukocyte filter.

[0014] The object of the present invention is therefore to provide an improved device for ex vivo conditioning and purifying of organs. In particular, the object of the present invention is to provide a device for ex vivo conditioning and purifying of organs capable of eliminating from the organ cell waste, cell elements and inflammatory substances which can cause dysfunction of the same and failure of the transplant.
[0015] Said object is achieved by the present invention, which concerns a kit for ex vivo conditioning and purifying of explanted organs according to claim 1. Preferred embodiments are defined in the dependent claims.
[0016] In particular, the present invention concerns a kit for ex vivo conditioning and purifying of an explanted organ comprising:
[0017] Advantageously, the presence of said separation means purifies and conditions the organ before reimplantation thereof in the recipient.
[0018] The kit is intended for use with a perfusion liquid, for example a commercial perfusion liquid, blood or plasma which, by circulating through the explanted organ and then through the kit of the invention, cleanses the same, eliminating cytokines, inflammation mediators, cell fragments, cell elements (entire cells), for example leukocytes, platelets and coagulation factors like ultra-large Von Willebrand factors.
[0019] The term "fractionation filter" indicates a hollow fibre filter having a cut-off ranging from 80,000 to 800,000 Da, made for example of a material like polysulfone (PS), polyethersulfone (PES), polymethylmethacrylate (PMMA), polyether-polyamide (PEPA), ethylene vinyl alcohol (EVAL) copolymer. The surface area generally ranges from 0.8 to 2.4 m2. Said fractionation filter allows the retention of cell fragments and elements, coagulation products (thrombi), coagulation products and ultra-large von Willebrand factors, i.e. with a molecular weight above 20,000 Dalton.
[0020] The term "cut-off" indicates the molecular weight for which the sieving coefficient of the membrane (ratio between quantity filtered and quantity contained in the fluid entering the filter) is below 5%.
[0021] In an embodiment not forming part of the present invention, the fractionation filter can alternatively be a high permeability filter, i.e. with a cut-off ranging from 45,000 to 80,000 Da.
[0022] Said fractionation filter allows discrimination of the compounds present in the perfusion liquid on the basis of the dimensions by means of physical exclusion, retaining the larger particles and allowing the cytokines to pass through.
[0023] The term "absorption cartridge" indicates an absorption cartridge produced by inserting in a rigid or semi-rigid housing a synthetic resin, preferably hydrophobic, for example an agarose resin, a styrene-divinylbenzene copolymer resin, an acrylic resin containing at least one functional group selected from the group consisting of carboxylic group, thiol group and aldehyde group. Said resins can also be modified to contain affinity ligands such as antibodies, glycoproteins, fusion proteins or peptides to promote the specific bond of cytokines or inflammatory molecules on the resin. The diameter of the resin beads in the absorption cartridge, modified if necessary with affinity ligands, ranges from 100 to 600 micron.
[0024] The term "pore dimension" indicates the dimension which allows the passage of cytokines and is twice as large as the length of the cytokines in its three-dimensional configuration. In general, the dimension of the pores ranges from 50 to 500 Angstrom.
[0025] The absorption cartridge allows retention of the inflammatory substances such as the interleukin 1 beta (IL1β), the interleukin 6 (IL6), the interleukin 17 (IL17), the interleukin 33 (IL33), the tumour necrosis factor alpha (TNFα), the receptor ST2, the angiopoietin-2 (Ang2), the vascular endothelial growth factor (VEGF), the macrophage migration inhibitory factor (MIF), the metalloproteinases MM3, MM9 and MM12, and the ligands correlated with the family of the B-cell lymphomas of the gene-2 (Bcl-2).
[0026] The term "plasma filter" indicates a hollow fibre filter made of a material such as polyethylene, cellulose acetate, polypropylene, polysulfone or polymethacrylate. The pore diameter of said plasma filter ranges from 0.2 to 0.6 micron. The surface area generally ranges from 0.2 to 0.8 m2. The plasma filter allows the retention of cell fragments and elements.
[0027] The term "haemofilter" indicates a filter with cut-off below 60,000 Dalton.
[0028] The term "leukocyte filter" indicates an element able to retain leukocytes. The sorbent material can consist of hydrophilic or hydrophobic polysulfone, cellulose acetate, polyethylene terephthalate, polyarylate and polyesters in general.
[0029] Said leukocyte filter allows the retention of leukocytes, microaggregates and platelets.
[0030] The organ and the separation means are joined to form a circuit via fluid connection means. These are made of biocompatible materials, in order to avoid undesired phenomena such as activation of the coagulation factors, for example they are ducts made of polyvinyl chloride (PVC).
[0031] In particular, the organ is connected to the fluid connection means via connection means, for example cannulae, which allow transport of the perfusion liquid from and to the organ.

[0032] Non-limiting embodiments of the present invention will now be described with reference to the accompanying drawings, in which:

1. A kit (1) for ex vivo conditioning and purification of an explanted organ, comprising:

- connection means to and from said organ (12);

2. A kit according to claim 1, characterized in that said fractionation filter (4) is a filter made of a material selected from the group consisting of polysulfone, polyethersulfone, polymethylmethacrylate, polyether polyamide, ethylene vinyl alcohol copolymer.

3. A kit according to claim 1, characterized in that said absorption cartridge (5) has a diameter of the resin beads in the range from 100 to 600 micron.

4. A kit according to claim 3, characterized in that said absorption cartridge (5) comprises at least one hydrophobic synthetic resin selected from the group consisting of an agarose resin, a styrene-divinylbenzene copolymer resin and an acrylic resin containing at least one functional group selected from the group consisting of carboxylic group, thiol group and aldehyde group.

5. A kit according to claim 1, characterized in that said plasma filter (7) is a filter made of a material selected from the group consisting of polyethylene, cellulose acetate, polypropylene, polysulfone and polymethacrylate.

6. A kit according to any one of the preceding claims, further comprising a pump (3).

7. A kit according to claim 6, characterized in that said pump (3) is positioned upstream of said separation means. 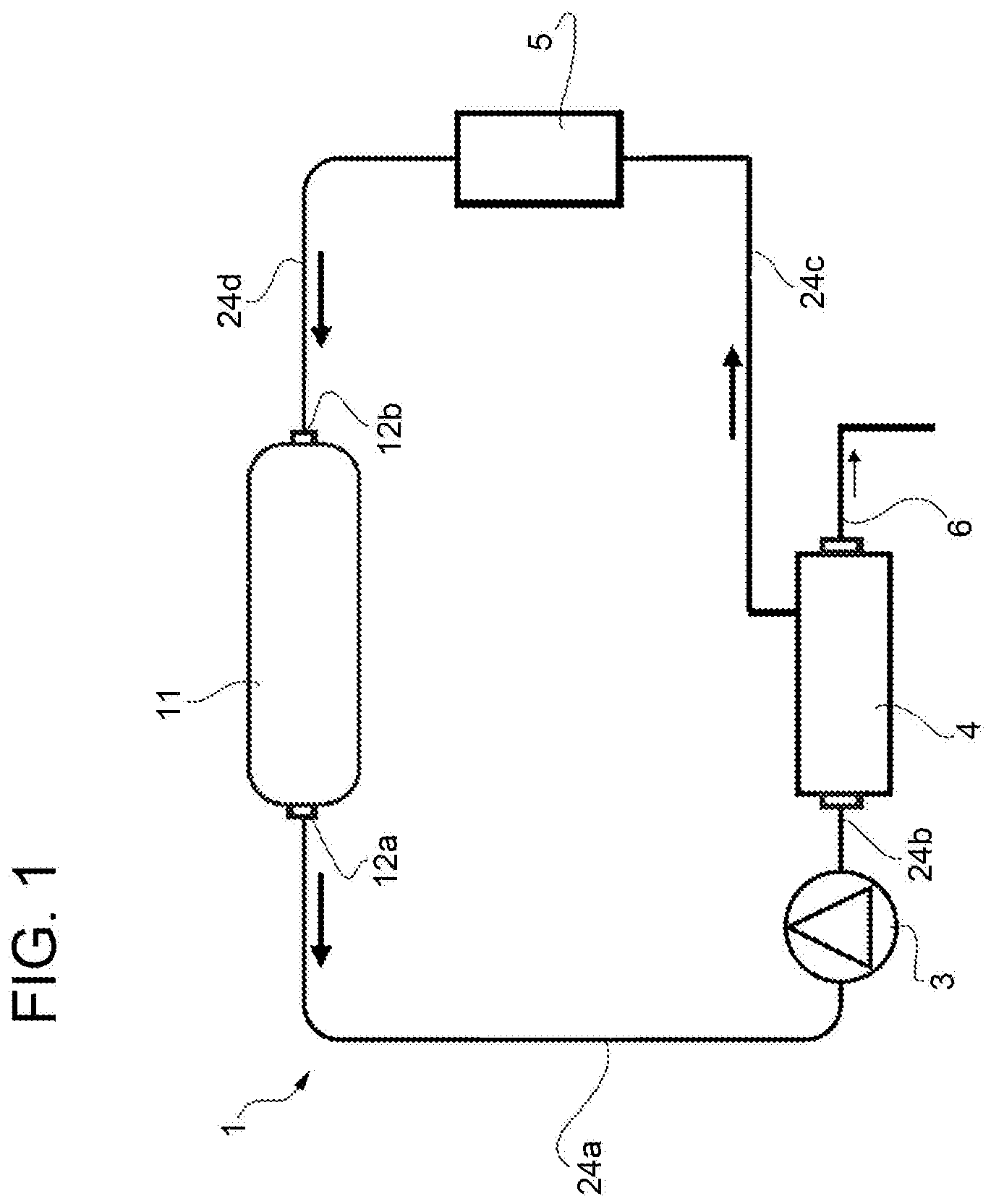 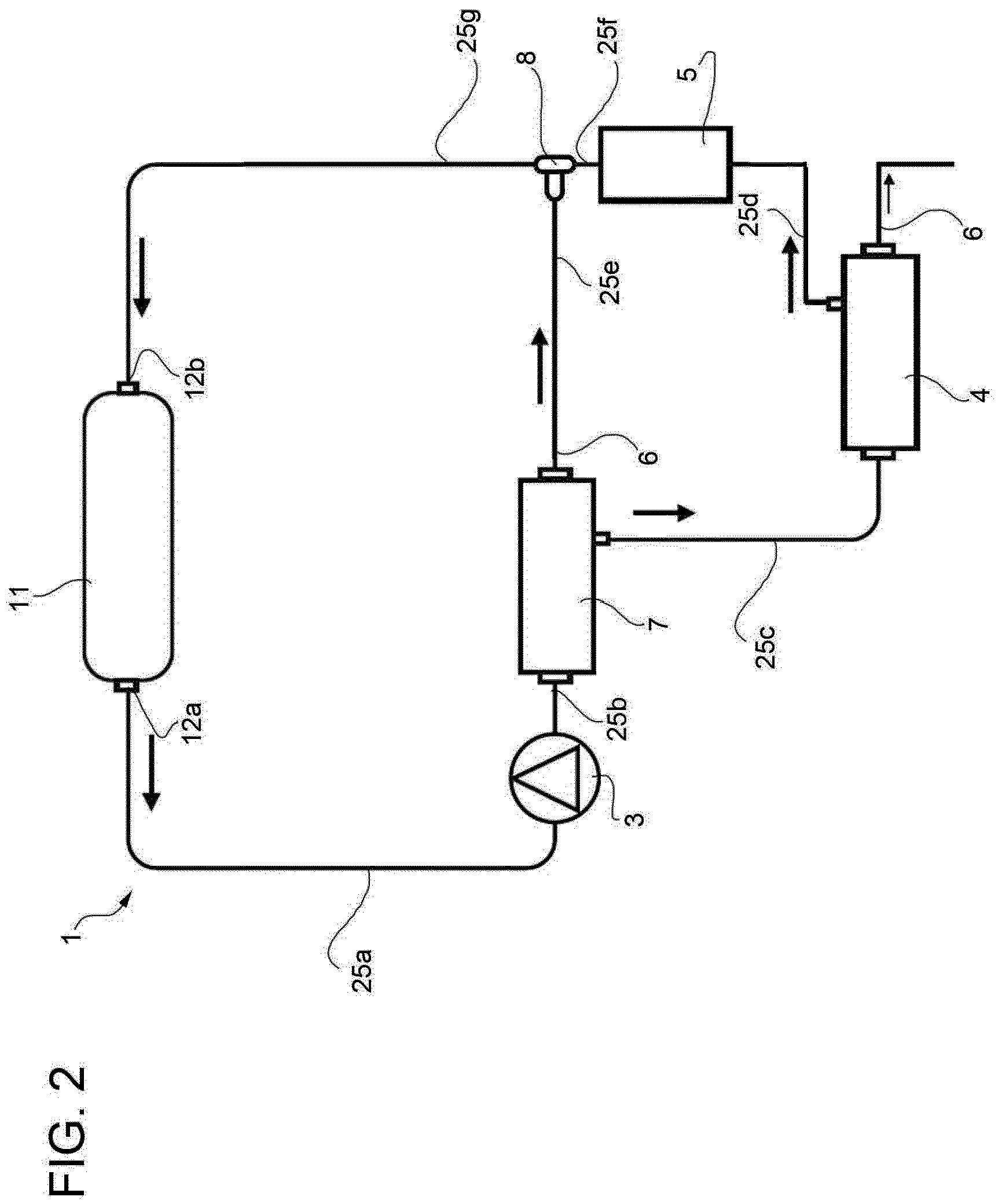