[0001] This specification relates to packed bed reactors and to water treatment, for example to remove selenium.

[0002] International Publication Number WO 2007/012181, Apparatus and Method for Treating FGD Blowdown or Similar Liquids, describes a fixed film reactor having a granular activated carbon (GAC) bed. The reactor can be used to treat water containing one or more of nitrate, selenium and sulfates. In one example, feed water flows downwards through the bed. Nitrate is removed in an upper part of the bed by biological conversion to nitrogen gas. Selenium is removed in a lower part of the bed by biological reduction of soluble selenium ions (i.e. selenate and selenite) into particles of elemental selenium. Nitrate is removed first because nitrate is a preferred electron acceptor for biological reduction over selenate or selenite. A suitable reactor is sold by GE Water & Process Technologies under the ABMET trade mark.
[0003] Reactors as described above have a grid of porous pipes below the GAC bed and an array of overflow troughs above the GAC bed. Precipitates (including excess biomass and selenium particles) are removed by periodically backwashing the bed with water fed through the under bed pipes and withdrawn by way of the overflow troughs. The backwashing water fluidizes the bed, which expands into a space provided between the top of the bed and the overflow troughs.
[0004] Nitrogen gas bubbles also accumulate in the bed. These bubbles are removed by briefly flowing water through the under bed pipes to expand the bed. Gas bubbles are released as the bed expands, and float upwards. In WO 2007/012181, this process is called "bumping" and happens more frequently than backwashing, but requires less time.

[0005] When a packed (non-fluidized) media bed reactor is used in a downflow mode to treat a feed stream that contains nitrate, denitrification (reduction of nitrate to nitrogen gas) will occur within the top of the media bed. The nitrogen gas forms bubbles, some of which travel upwards through the bed due to buoyancy forces and escape the bed. However, some of the bubbles become trapped within the packed bed due to the packed nature of the media, as well as its relatively small particle size. In addition, the biomass that performs the denitrification process also resides within the top of the media bed. Both the trapped bubbles and biomass resist flow, resulting in increased pressure drop through the media bed over time. The pressure drop can become severe enough to make a packed bed reactor incapable of achieving reasonable through-put capacity.
[0006] In order to remove the nitrogen bubbles and biomass, the media bed may be bumped as described in the background section. However, the inventors have observed that when treating water with a material nitrate concentration, very frequent bumps are required. This requires a significant volume of water, which if reprocessed through the system reduces the effective capacity of the system. The inventors have also observed that frequent bumping disturbs the region of the bed where selenium reduction occurs, causing a reduction in selenium removal.
[0007] A media bed reactor described in this specification has a fluid injection system with one or more outlets located within a media bed. The fluid injection system may be connected to a source of gas, liquid or both. In a selenium-reducing reactor, the one or more outlets are located near an expected interface between a denitrification zone and a selenium reduction zone in the bed. The fluid injection system may also have one or more outlets located at a second elevation, such as near or below the bottom of the bed.
[0008] In a process described in this specification, a media bed reactor is used to removed nitrate and selenium from water. A denitrification zone and a selenium reducing zone form in the bed. Operation of the reactor includes a step of flowing a fluid upwards through only an upper part of the bed. This upper part of the bed preferably contains at least most of the denitrification zone. The fluid may be liquid, gas, or a two-phase gas-liquid mixture. The process may also include a step of backwashing substantially all of the bed.

Figure 1 is a schematic cross section of a media bed reactor operating in production mode.

Figure 2 is a schematic cross section of the reactor of Figure 1 operating in full-bed backwash mode.

Figure 3 is a schematic cross section of the reactor of Figure 1 operating in partial bed backwash mode.

2. The reactor of claim 1 wherein the fluid injection system is connected to a source (36) of a gas.

4. The reactor of any one of claims 1 to 3, further comprising outlets located below or near the bottom of the media bed.

5. A process for treating water, comprising steps of
flowing the water (30) downwards through a media bed (14); and
flowing a fluid (32) upwards though an upper portion of the media bed.

6. The process of claim 5 wherein the upper portion of the media bed (14) contains at least part of a denitrification zone, and the media bed further includes a selenium-reducing zone. 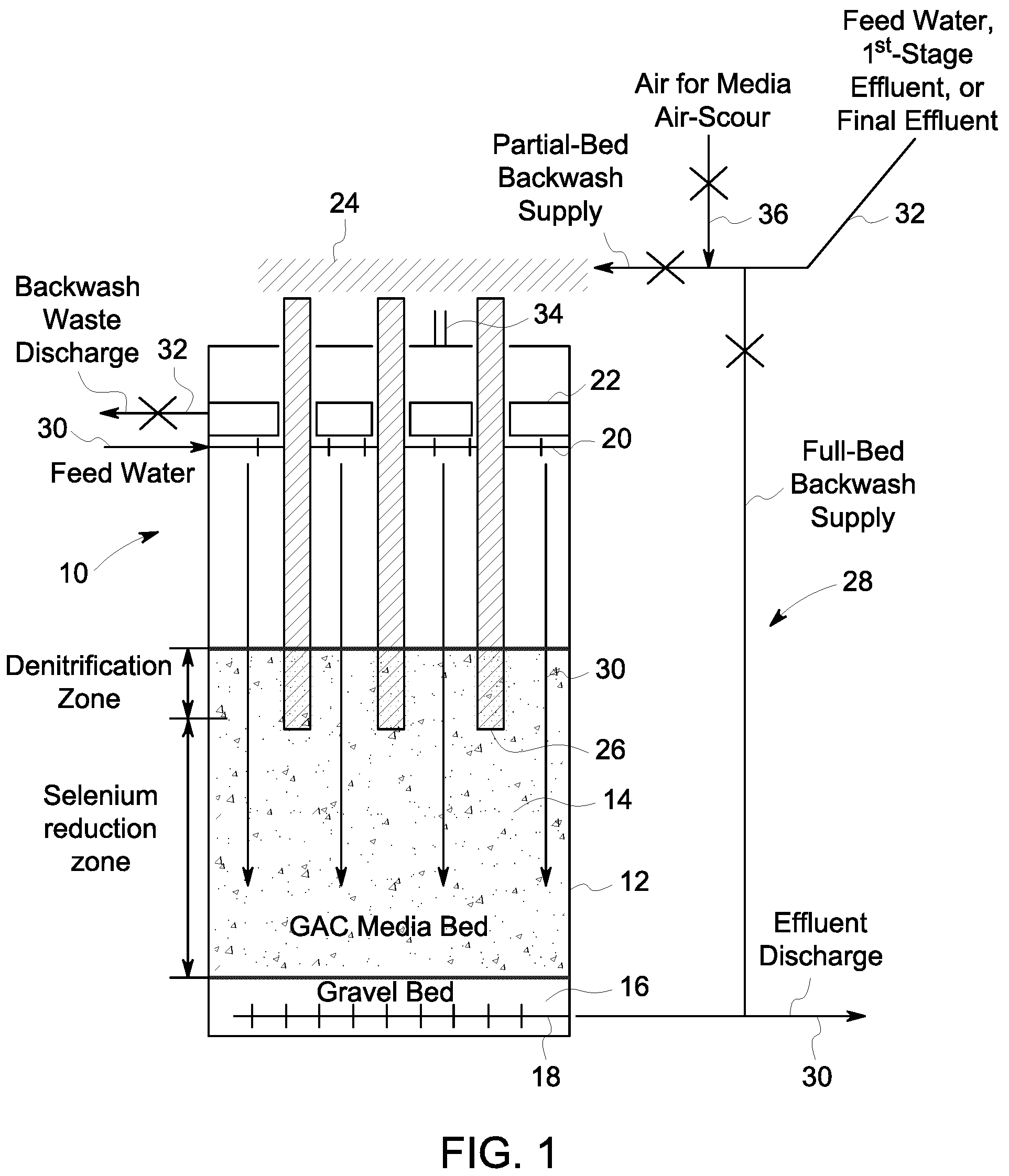 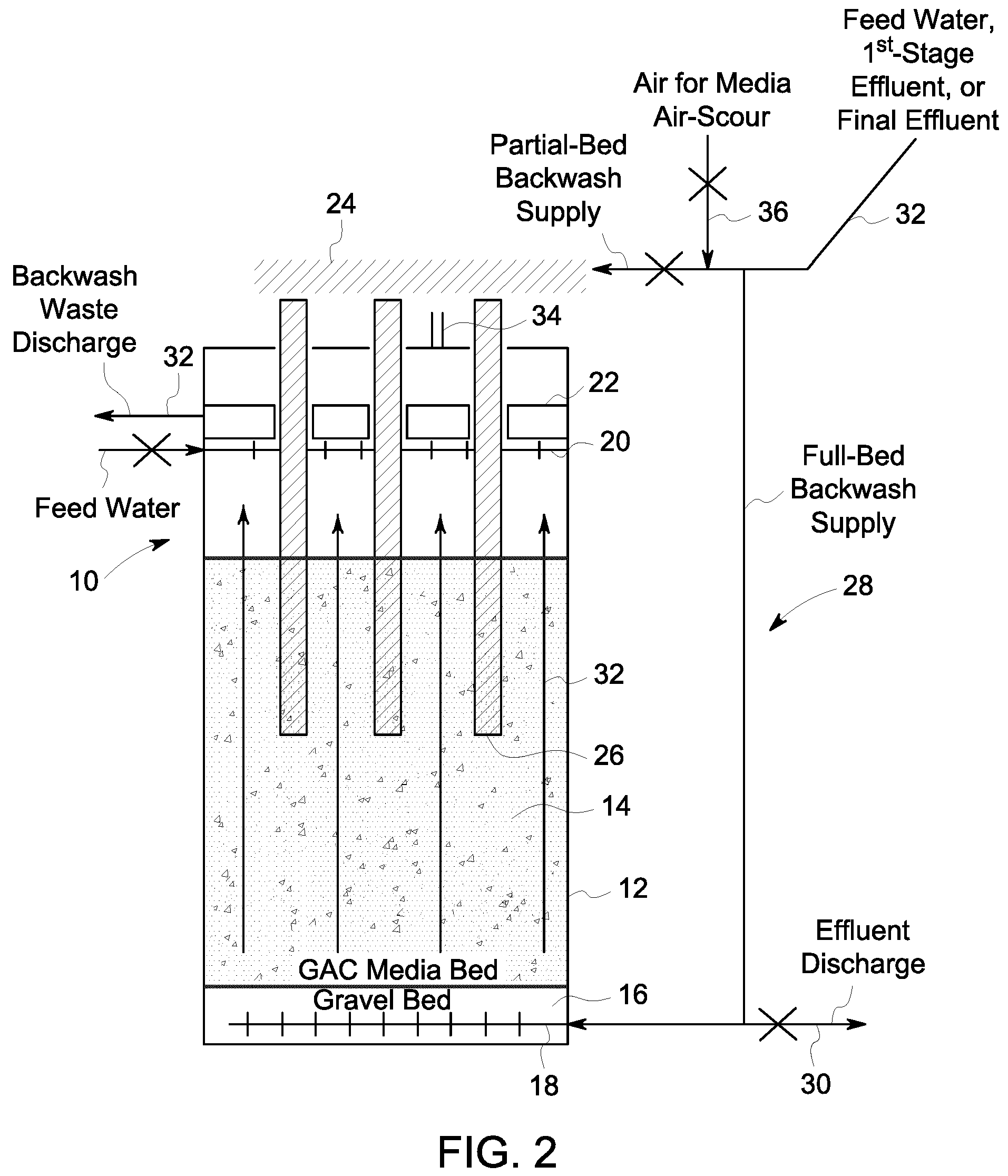 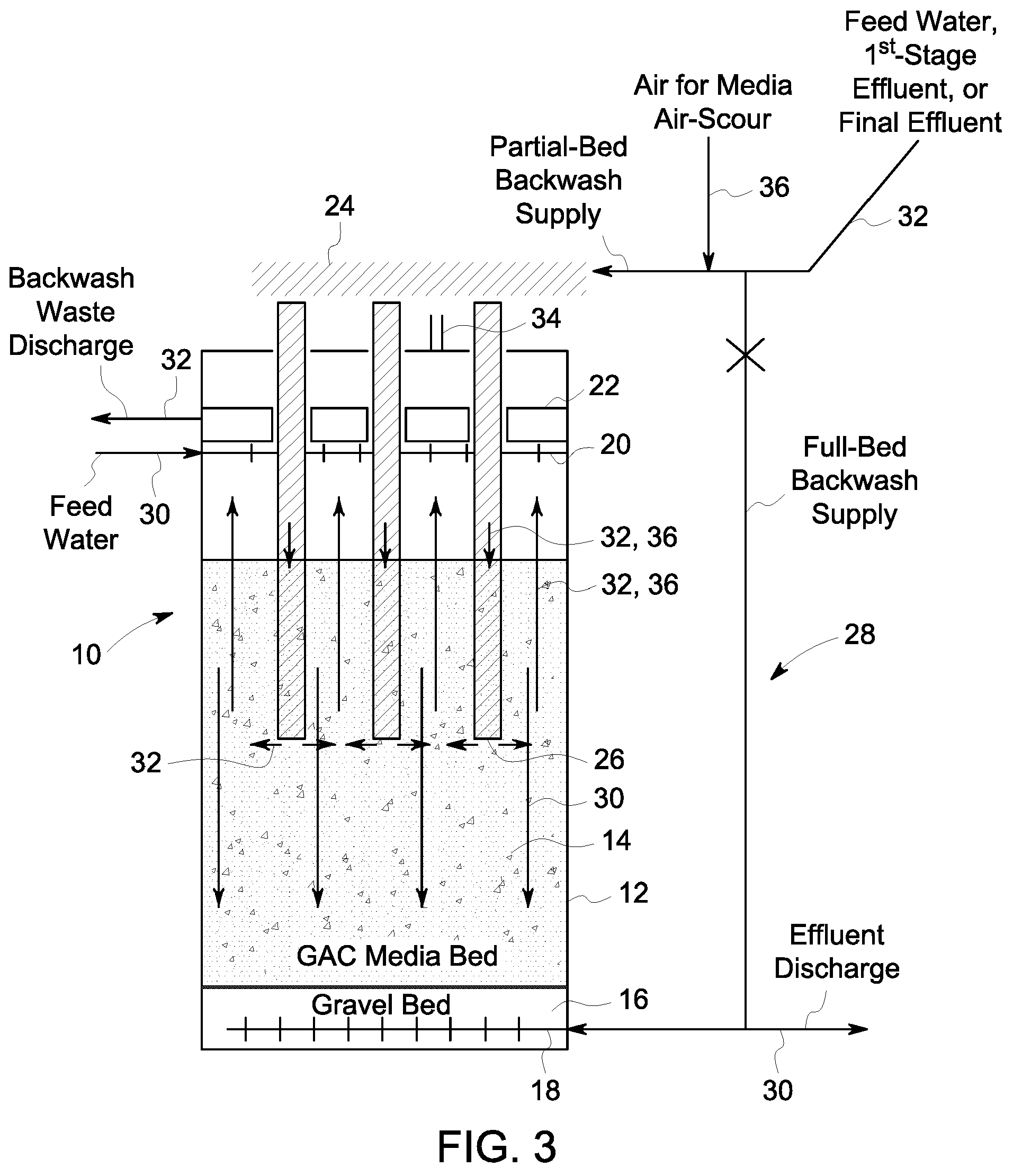 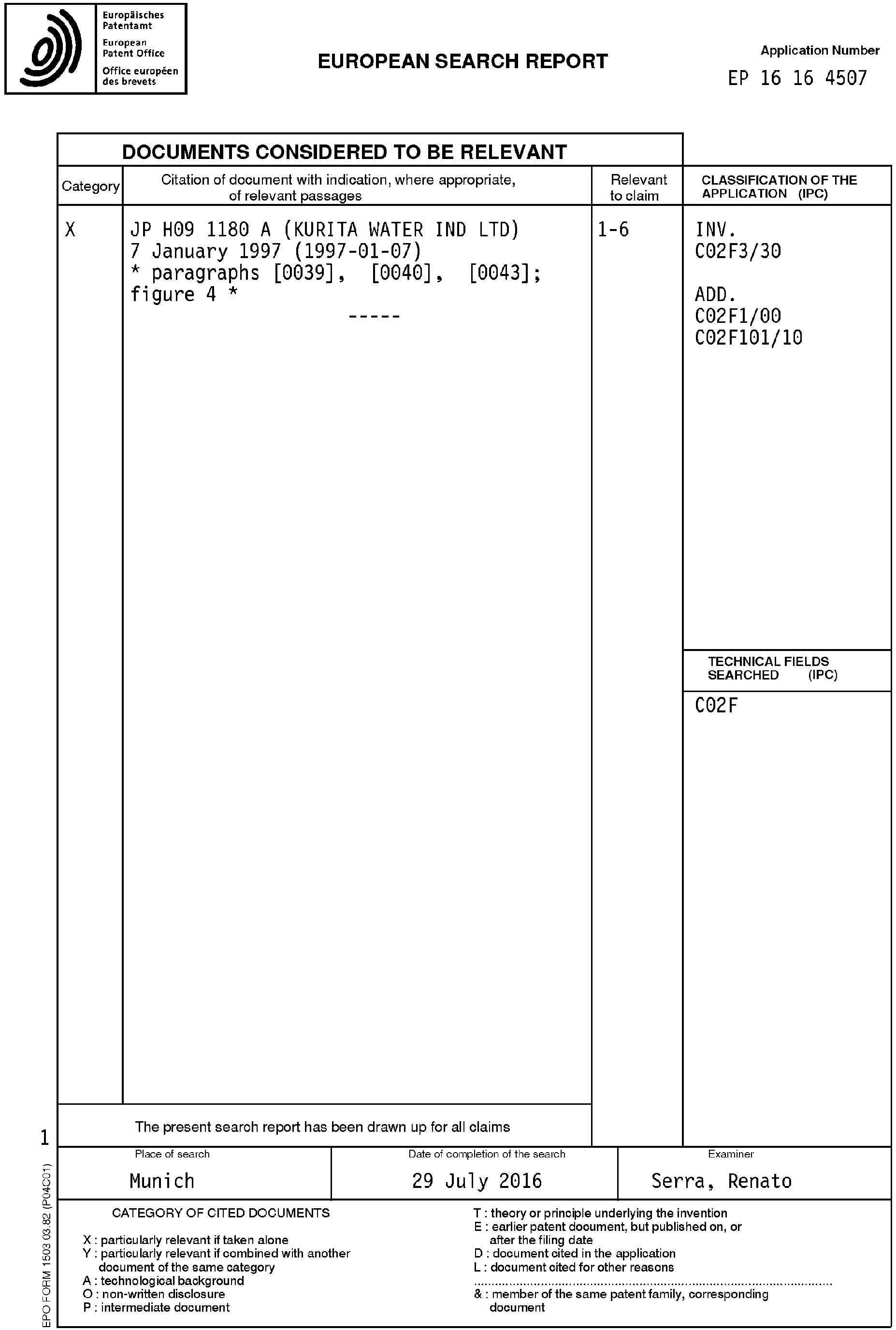 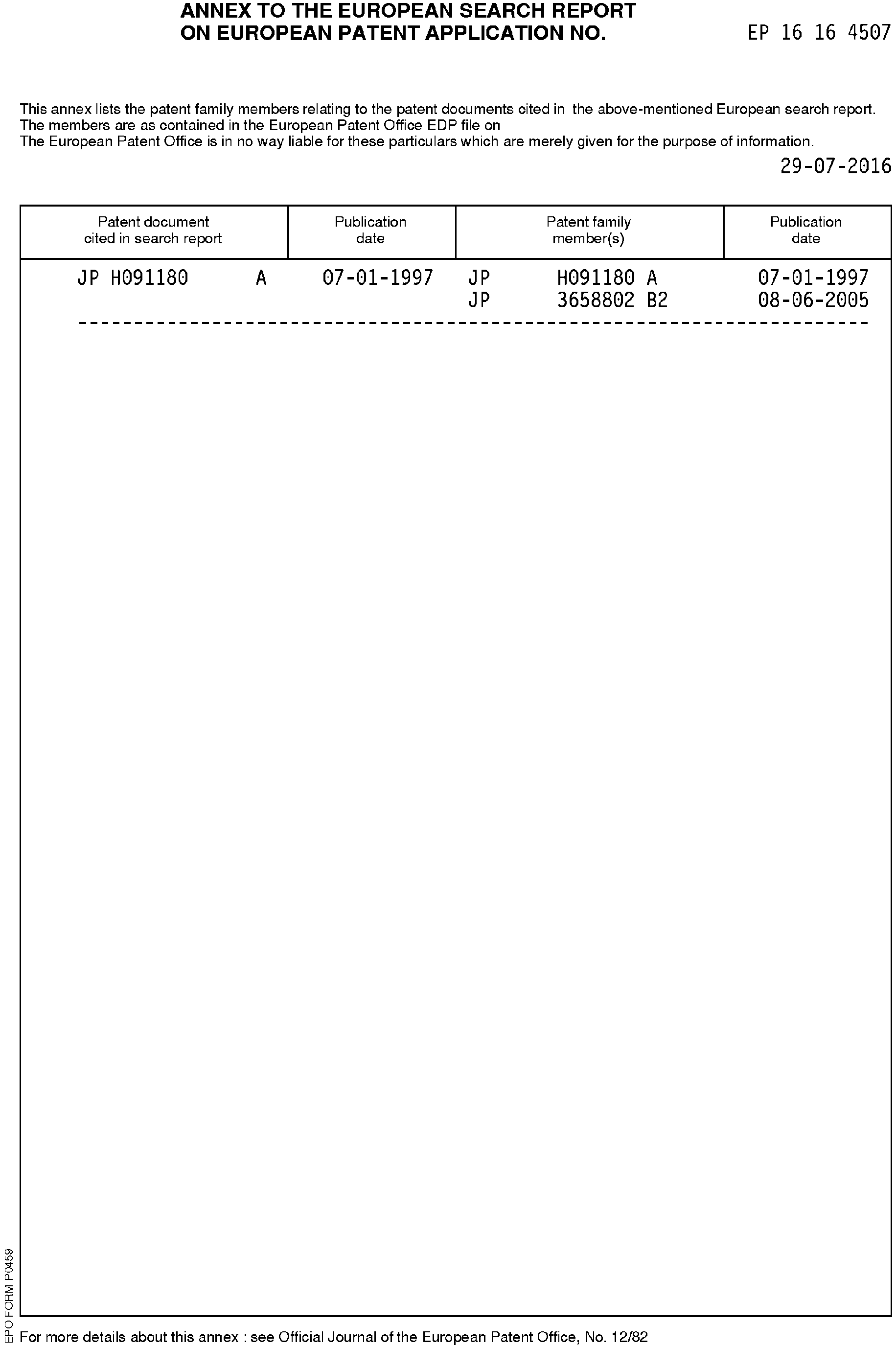