[0002] Fiber-optic cables are known for their ability to transmit data at faster rates than electrical wires. With the increasing demand for high-speed data transmission for consumer electronic devices (smart phones, tablet computers, laptop computers, digital cameras, video cameras, etc.), fiber-optic cables are starting to replace electrical cables for data transmission applications.
[0003] To this end, the fiber-optic cables need to be terminated in a manner that allows for them to be operably connected to the electronic devices. For example, many consumer electronic devices have Universal Serial Bus (USB) electrical ports for establishing an electrical connection with an external device. The latest USB specification (USB 3.0) supports a data rate of 5 Gb/s, which is ten times faster than the previous USB specification (USB 2.0), and the latest version is still backwards compatible with the USB 2.0. As fiber optic cable designs begin migrate into this space to support faster data rates, they still must be backwards compatible with the installed base of ports. Active optical cable (AOC) assemblies allow the use of the optical fibers as the transmission medium between connectors instead of copper wires; however, the optical signals conveyed by the optical fibers are converted into electrical signals so that the connector has an electrical interface making compatible with installed base.
[0004] In other words, for an AOC fiber-optic cable to be connected to a USB port, it must be terminated with a USB electrical interface configured to transmit electrical signals at the port connection. Unlike a fiber-optic cable used for telecommunications that experiences relatively few connections and disconnections to a panel in a controlled environment, a fiber-optic cable used for consumer electronics will experience frequent connections and disconnections in a variety of environments. Consequently, the mechanical connection between the fiber-optic cable and the connector that terminates the cable must be robust for the large number of mating/unmating cycles.
[0005] US 2011/229083 A1 discloses a fiber optic interface with a translatable ferrule device. US 2011/229083 A1 discloses passive optical fiber connectors.
[0006] EP 0 131 283 A2 discloses a method and an apparatus for anchoring optical connectors. EP 0 131 283 A2 discloses passive optical fiber connectors.

[0014] The accompanying drawings are included to provide a further understanding, and are incorporated in and constitute a part of this specification. The drawings illustrate one or more embodiment(s), and together with the Detailed Description serve to explain principles and operation of the various embodiments. As such, the disclosure will become more fully understood from the following Detailed Description, taken in conjunction with the accompanying Figures, in which:

FIG. 1A is an elevated view of an example fiber-optic cable that includes two peripheral strength members;

FIG. 1B is an end-on view of the fiber cable of FIG. 1A having jacket split ends, where each split end includes a strength member extending therefrom;

FIGS. 2D through 2F are similar to FIGS. 2A through 2C and illustrate a second example fiber-optic-cable assembly wherein the attachment structure secures the strength members to an outer barrel using a crimp band;

FIGA. 3A and 3B are exploded views of first and second examples of the fiber-optic-cable assembly, respectively;

FIG. 4B is a cut-away view of the attachment structure and shows a longitudinal cross-section of the structure;

FIGS. 5A and 5B are similar to FIGS. 4A and 4B, and show an example attachment structure that uses the outer barrel of the main body for securing the strength members using a crimp band;

FIGS. 6A and 6B are close-up bottom-up and top-down elevated views of a central portion of the fiber-optic-cable assembly that includes the strength member secured to the securing features of the attachment structure;

FIG. 7A is a side-elevated side view of the fiber-optic-cable assembly and includes a close-up inset that shows an example of how a strength member can engage optional securing features; and

FIG. 7B is similar to FIG. 7A and illustrates an embodiment of the fiber-optic-cable assembly wherein the attachment structure has the strength members secured to the using a crimp band on a portion of the main body.

[0015] Reference is now made in detail to various embodiments of the disclosure, examples of which are illustrated in the accompanying drawings. Whenever possible, the same or like reference numbers and symbols are used throughout the drawings to refer to the same or like parts. The drawings are not necessarily to scale, and one skilled in the art will recognize where the drawings have been simplified to illustrate the key aspects of the disclosure.
[0016] The claims as set forth below are incorporated into and constitute part of this Detailed Description.
[0017] The entire disclosure of any publication or patent document mentioned herein is incorporated by reference.
[0018] Cartesian coordinates are shown in some of the Figures for the sake of reference and are not intended to be limiting as to direction or orientation.
[0019] The term "connectorize" as used herein means to operably attach or otherwise operably secure a connector to a fiber-optic cable. In the description below, the term "fiber-optic-connector assembly" can be considered as synonymous with the term "connectorized fiber-optic cable."

[0020] FIG. 1A is an elevated view of an example prior art fiber-optic cable ("cable") 10. The cable 10 includes a jacket 20 that defines a cable central axis A1, which is shown oriented along the Z-direction. The jacket 20 has an outer surface 22 and includes a central longitudinal (axial) cavity 26 configured to support at least one optical fiber 30, with four optical fibers being shown by way of example. The optical fibers 30 have respective ends 32.
[0021] The cable 10 also includes at least one strength member 40 that runs longitudinally down the cable at an off-axis (peripheral) position between central cavity 26 and jacket outer surface 22. The jacket 20 is also shown as having a terminal end 24. In one example, cable 10 includes two peripheral strength members 40, which are shown protruding from terminal end 24 of jacket 20 and having respective ends 42. The strength members 40 are disposed on either side of central cavity 26 and reside along an imaginary line denoted L that includes cable central axis A1. Here, imaginary line L is oriented along the X-axis. This configuration provides resistance to bending of cable 10 in the X-Z plane but allows for bending in the Y-Z plane. In an example, central cavity 26 is elongated in the Y-direction to provide room for optical fibers 30 to move and adjust their position when cable 10 is bent in the Y-Z plane.
[0022] Example strength members 40 include members that preferably provide anti-buckling strength to cable 10. Example materials for strength members 40 include stranded stainless steel, copper and aramid fibers such as KEVLAR, fiberglass, and the like. However, the concepts disclosed may be used with fiber optic cables having strength members that generally lack anti-buckling characteristics such as aramid yarns or the like.
[0023] FIG. 1B is an end-on view of an example of cable 10 wherein jacket 20 is split at terminal end 24 to form first and second jacket split ends 20A and 20B. The first and second jacket split ends 20A and 20B define a slit opening 21 in jacket 20. The jacket split ends 20A and 20B each include one strength member 40 that extends from terminal end 24. The strength members 40 associated with jacket split ends 20A and 20B are hereafter respectively denoted as strength members 40A and 40B, with their respective ends denoted as 42A and 42B. The at least one optical fiber 30 also extends from terminal end 24. This allows for strength members 40A and 40B to be laterally separated and used to perform a securing function, as described below, while also allowing the at least one optical fiber 30 to be routed in a select manner, also as described below.

a sleeve having opposite front and back ends (302, 304) and a central bore (306) that runs generally along a central axis, the sleeve having a generally cylindrical main body section (310) with an outer surface (312) and that includes the back end (304), the sleeve further having at the front end (302) a front mounting section (322) configured for supporting a circuit board (230);

wherein the central bore (306) is sized to pass the at least one optical fiber (30);

the attachment assembly of claims 1-5; and 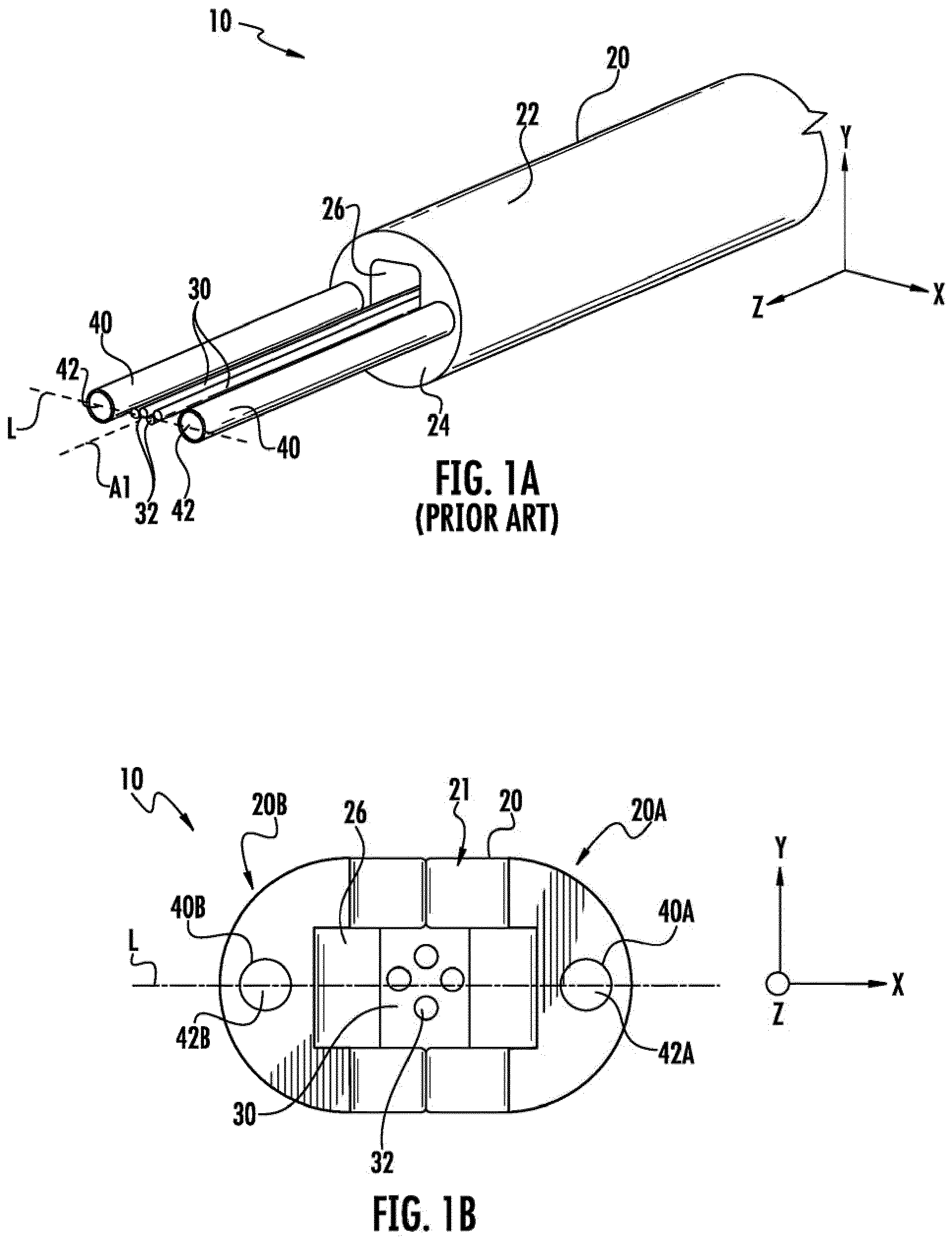 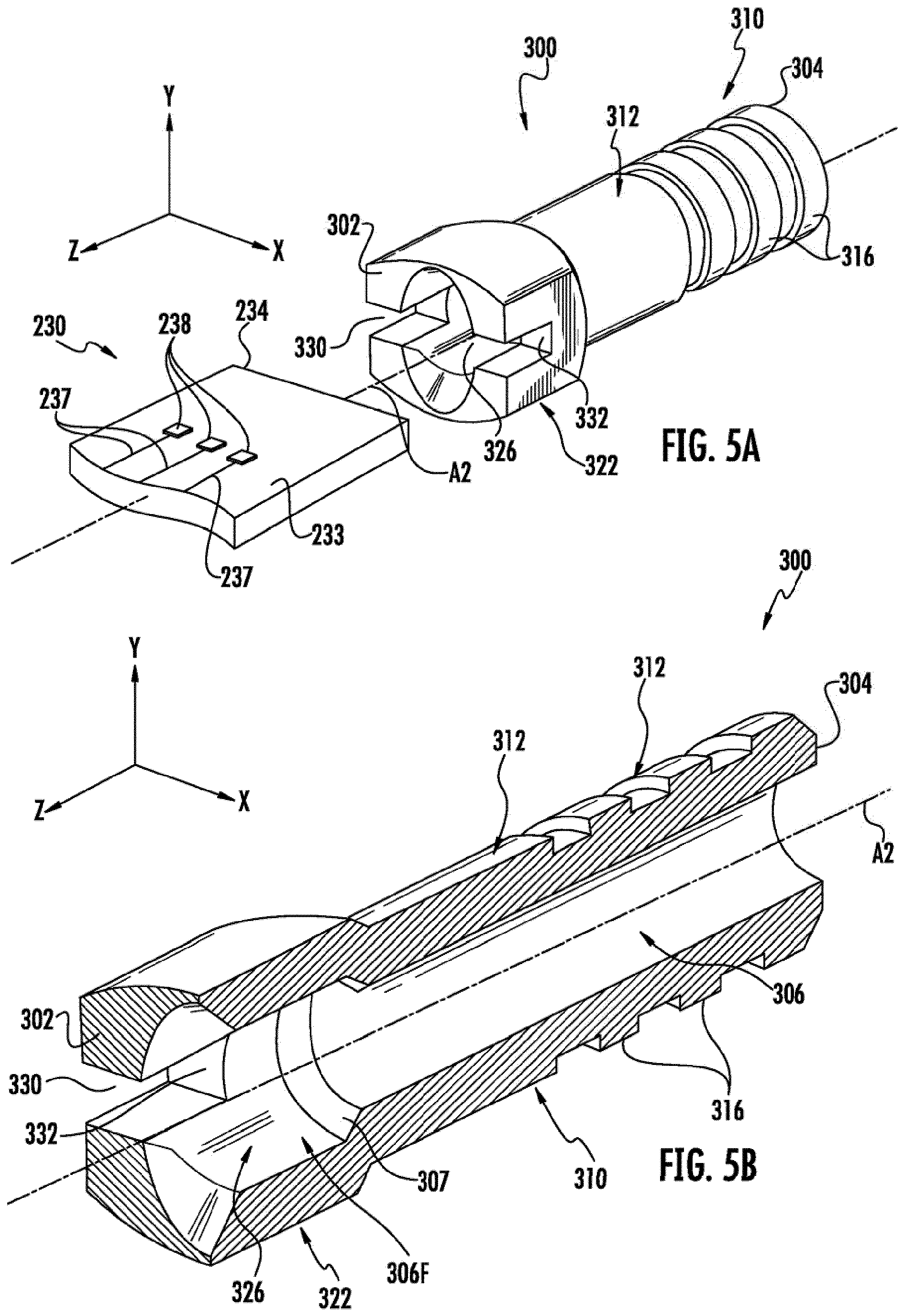 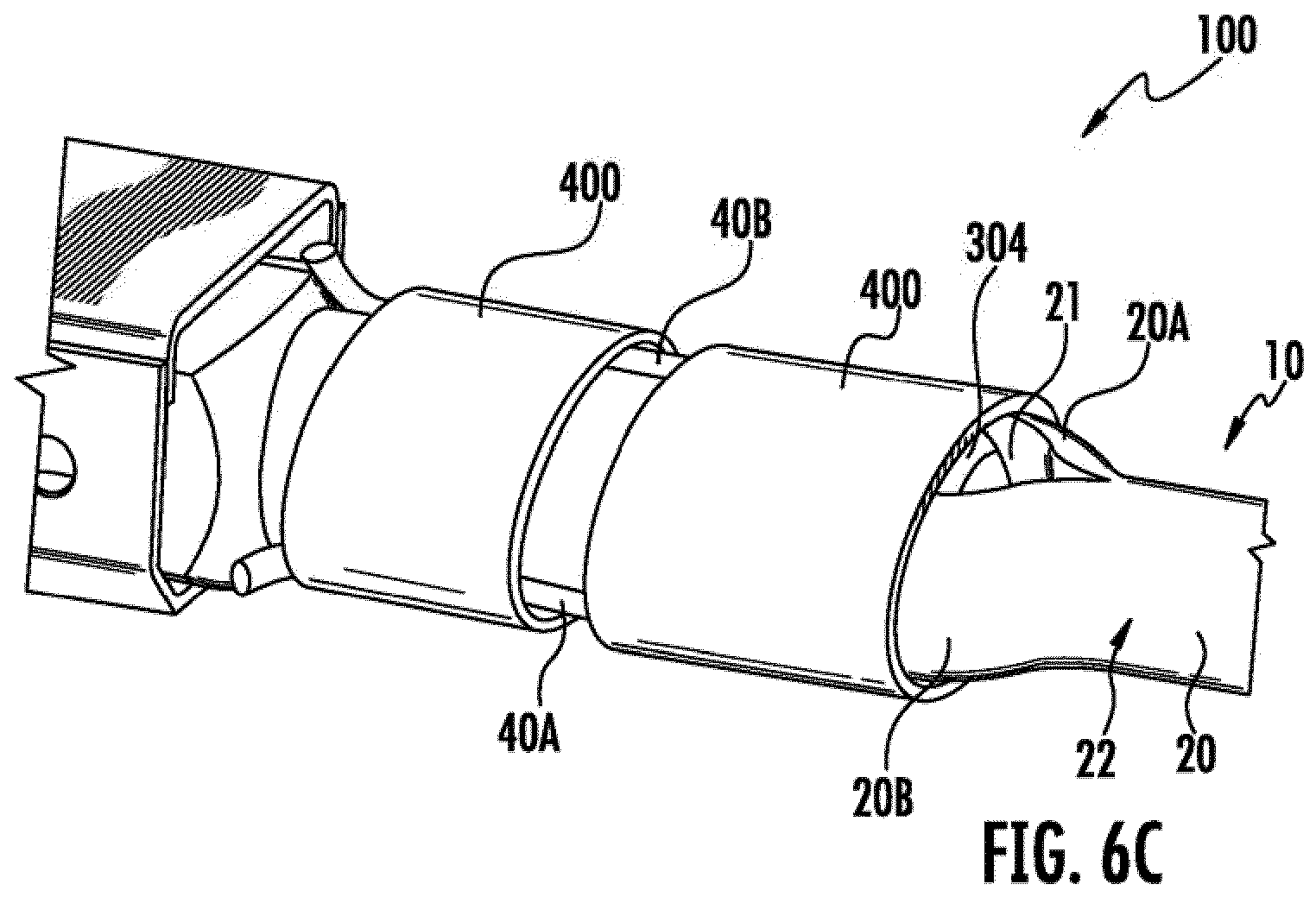 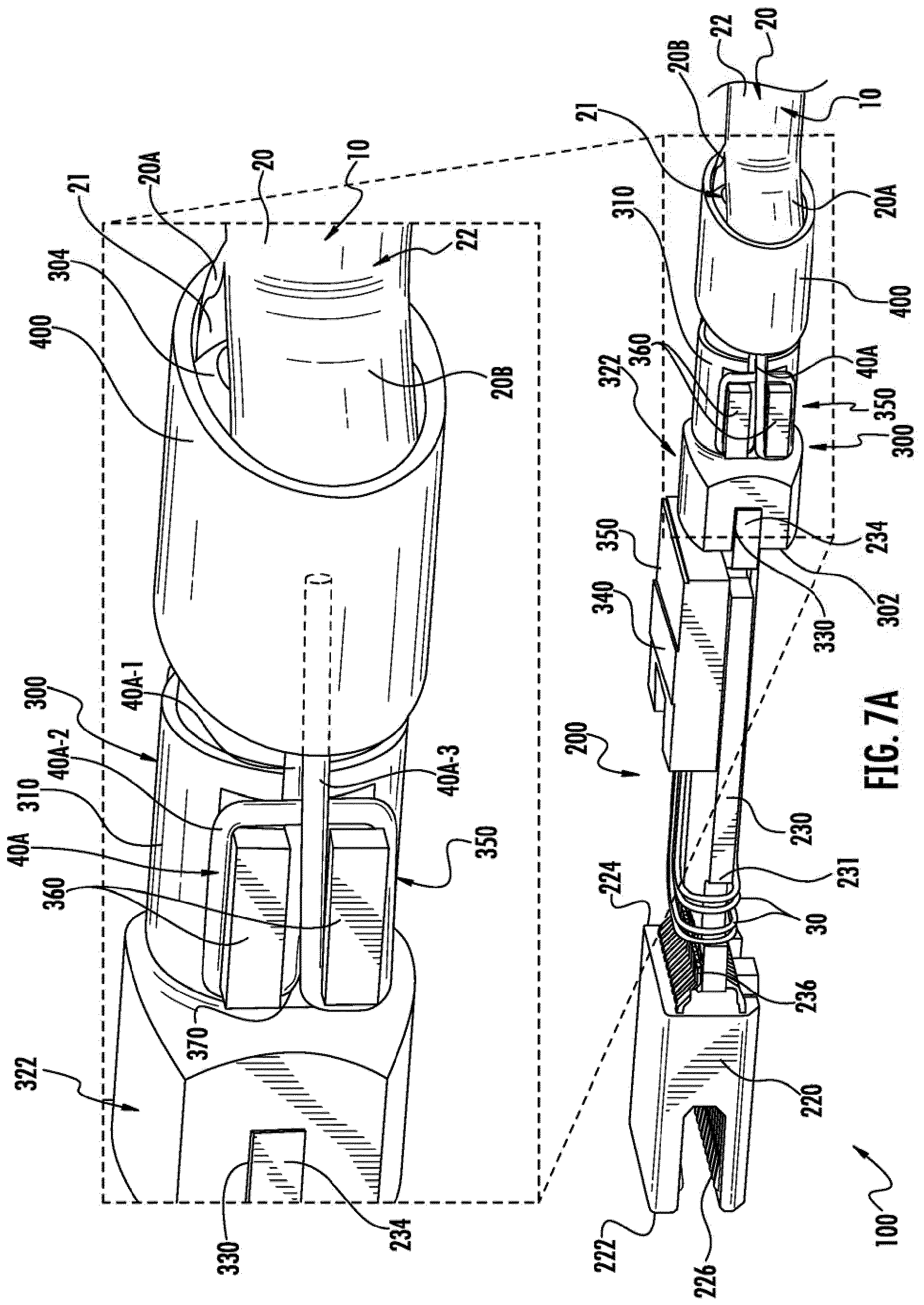 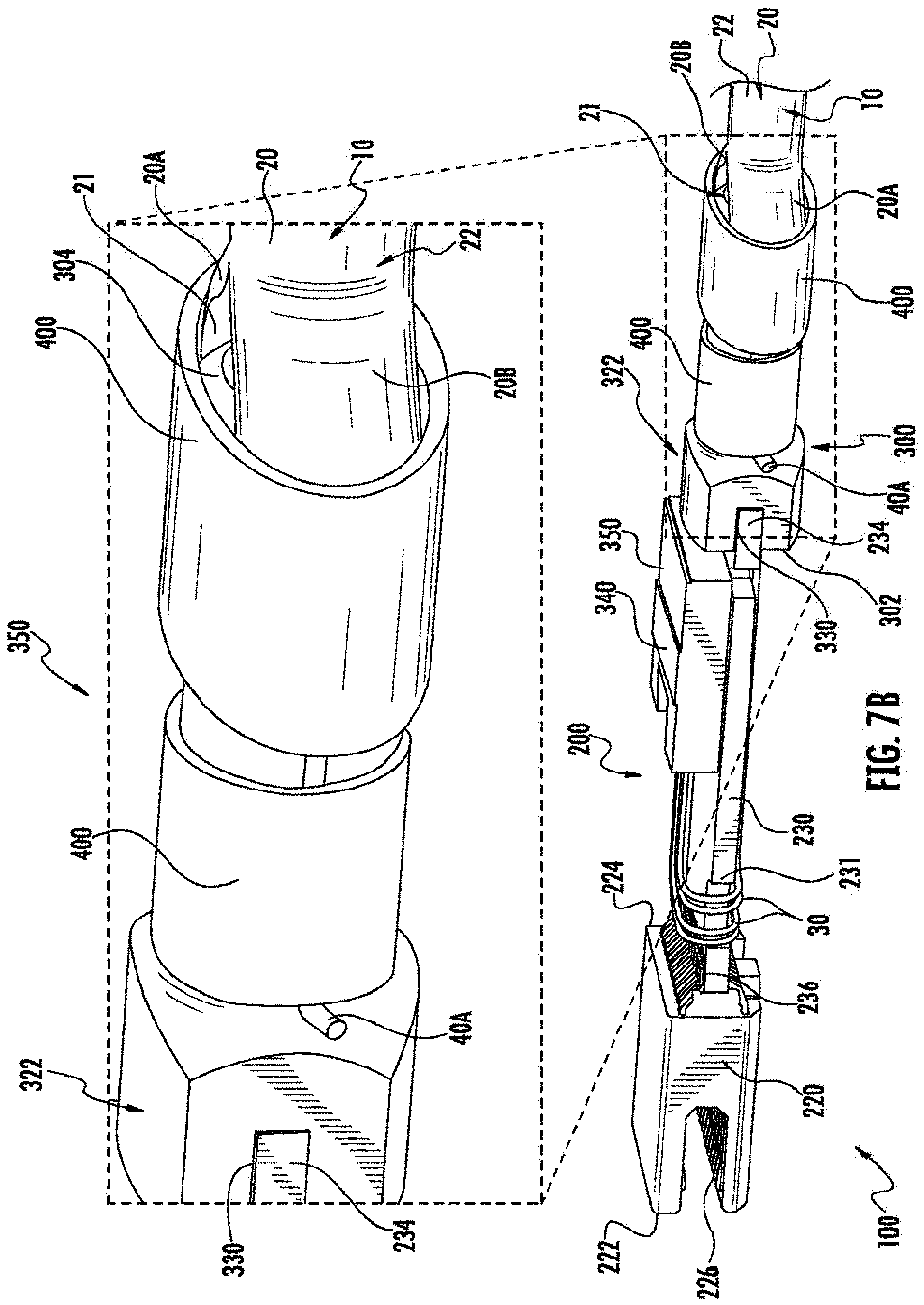