[0001] The present invention relates to segmenting a medical instrument in an ultrasound image and, more particularly, to dynamically performing the segmentation responsive to acquiring the image. Performing "dynamically" or in "real time" is interpreted in this patent application as completing the data processing task without intentional delay, given the processing limitations of the system and the time required to accurately measure the data needed for completing the task.

[0002] Ultrasound (US) image guidance increases the safety and efficiency of needle guided procedures by enabling real-time visualization of needle position within the anatomical context. The ability to use ultrasound methods like electronic beam steering to enhance the visibility of the needle in ultrasound-guided procedures has become a significant competitive area in the past few years.
[0003] While real-time 3D ultrasound is available, 2DUS is much more widely used for needle-based clinical procedures due to its increased availability and simplified visualization capabilities.
[0004] With 2DUS, it is possible to electronically steer the US beam in a lateral direction perpendicular to the needle orientation, producing strong specular reflections that enhance needle visualization dramatically.
[0005] Since the current orientation of the probe with respect to the needle is not typically known at the outset, the beam steering angle needed to achieve normality with the needle is also unknown.
[0006] Also, visualization is difficult when the needle is not directly aligned within the US imaging plane and/or the background tissue contains other linear specular reflectors such as bone, fascia, or tissue boundaries.
[0007] In addition, artifacts in the image come about for various reasons, e.g., grating lobes from steering a linear array at large angles and specular echoes from the above-mentioned linear and other specular reflectors offering a sharp attenuation change to ultrasound incident at, or close to, 90 degrees.
[0008] "Enhancement of Needle Visibility in Ultrasound-Guided Percutaneous Procedures" by Cheung et al. (hereinafter "Cheung") discloses automatic segmenting of the needle in an ultrasound image and determining the optimum beam steering angle.
[0009] Problematically, specular structures that resemble a needle interfere with needle detection. Speckle noise and imaging artifacts can also hamper the detection.
[0010] The solution in Cheung is for the user to jiggle the needle, thereby aiding the segmentation based on difference images.
[0011] In addition, Cheung requires user interaction in switching among modes that differ as to the scope of search for the needle. For example, a user reset of the search scope is needed when the needle is lost from view.
[0012] Cheung segmentation also relies on intensity-based edge detection that employs a threshold having a narrow range of effectiveness.
[0013] In "Temporal-based needle segmentation algorithm for transrectal ultrasound prostate biopsy procedures" by Derek W. Cool et al., Medical Physics, AIP, Melville, NY, US, vol. 37, no. 4, pp. 1660-1673, 18 March 2010, XP012135694, it is disclosed a temporal-based transrectal ultrasound (TRUS) needle segmentation algorithm for accurate segmentation of the biopsy needle and needle tip from TRUS biopsy images. The algorithm automatically identifies a TRUS image containing the biopsy needle from a collection of 2D TRUS images and segments the biopsy-core location from the 2D TRUS image.
[0014] On the other hand, "Detection and Measurement of Fetal Anatomies from Ultrasound Images using a Constrained Probabilistic Boosting Tree" by G. Carneiro et al., IEEE Transactions on Medical Imaging, Service Center, Piscataway, NJ, US, vol. 27, no. 9, pp. 1342-1355, 1 September 2008, XP011232034, describes a method for fast automatic detection and measurement of fetal anatomical structures in ultrasound images that directly exploits a large database of expert annotated fetal anatomical structures in ultrasound images. The method learns automatically to distinguish between the appearance of the object of interest and background by training a constrained probabilistic boosting tree classifier.

[0015] What is proposed herein below addresses one or more of the above concerns.
[0016] In addition to above-noted visualization difficulties, visualization is problematic when the needle is not yet deeply inserted into the tissue. The Cheung difficulty in distinguishing the needle from "needle-like" specular deflector is exacerbated in detecting a small portion of the needle, as when the needle insertion is just entering the field of view. In particular, Cheung applies a Hough transform to edge detection output of the ultrasound image. Specular structures competing with the needle portion may appear longer, especially at the onset of needle entry into the field of view. They may therefore accumulate more votes in the Hough transform, and thereby be identified as the most prominent straight-line feature in the ultrasound image, i.e., the needle.
[0017] Yet, the clinical value of needle detection is questionable if, to determine the needle's pose, there is a need to wait until the needle is more deeply inserted. It would be better if the needle could be detected earlier in the insertion process, when the physician can evaluate its trajectory and change course without causing more damage and pain.
[0018] Reliable needle segmentation would allow automatic setting of the optimal beam steering angle, time gain compensation, and the image processing parameters, resulting in potentially enhanced visualization and clinical workflow.
[0019] In addition, segmentation and detection of the needle may allow fusion of ultrasound images with pre-operative modalities such as computed tomography (CT) or magnetic resonance (MR) imaging, enabling specialized image fusion systems for needle-based procedures.
[0020] A technological solution is needed to automatic needle segmentation that does not rely of the assumption that the needle is the brightest linear object in the image.
[0021] This object is solved by the classification-based medical image segmentation apparatus of claim 1, and by the computer-readable medium embodying a computer program for classification-based identification of a medical image of claim 16. Advantageous embodiments are defined by the dependent claims.
[0022] In sub-aspects or related aspects, US beam steering is employed to enhance the appearance of specular reflectors in the image. Next, a pixel-wise needle classifier trained from previously acquired ground truth data is applied to segment the needle from the tissue background. Finally, a Radon or Hough transform is used to detect the needle pose. The segmenting is accomplished via statistical boosting of wavelet features. The whole process of acquiring an image, segmenting the needle, and displaying an image with a visually enhanced and artifact-free needle-only overlay is done automatically and without the need for user intervention.
[0023] Validation results using ex-vivo and clinical datasets show enhanced detection in challenging ex-vivo and clinical datasets where sub-optimal needle position and tissue artifacts cause intensity based segmentation to fail.
[0024] Details of the novel, real time classification-based medical image segmentation are set forth further below, with the aid of the following drawings, which are not drawn to scale.

FIG. 1 is a schematic and conceptual diagram of an exemplary real time classification-based medical image segmentation apparatus, in accordance with the present invention;

FIG. 2 is a conceptual diagram exemplary of the training, and clinical performance, of a statistical boosted classifier, and its use, in accordance with the present invention;

FIG. 3 is a conceptual diagram of a type of needle localization in accordance with the present invention;

FIG. 4 is a pair of flow charts of subroutines usable in a version of the present invention; and

FIG. 5 is a flow chart of a main routine demonstrating a clinical operation in accordance with the present invention.

an ultrasound image acquisition device (104) configured for acquiring, by means of ultrasound, an image depicting a medical instrument; and

a classification circuitry (168) configured to, dynamically responsive to said acquiring, segment the medical instrument by operating on information derived from said image,

in that the apparatus is configured for

- via the ultrasound image acquisition device, dynamically performing, automatically, without need for user intervention, said acquiring incrementally, in a sweep, over a range (308) of ultrasound beam angles (236) for corresponding depictions of the medical instrument, the segmenting of said depictions being dynamically responsive to the incremental acquiring,

- applying, increment (312) by increment, a line detection algorithm to output of said segmenting for respective ones of said depictions, and

- adding outputs of said algorithm to derive an orientation of the medical instrument.

5. The apparatus of claim 1, further comprising an ultrasound imaging probe (112), said apparatus being configured for dynamically determining, based on an output of the segmenting, an orientation of the medical instrument with respect to said probe.

6. The apparatus of claim 1, wherein the medical instrument is a medical needle (136).

7. The apparatus of claim 6, wherein the orientation of the medical needle (136) comprises a needle offset and a needle angle (328).

8. The apparatus of claim 7, further configured for using the determined needle angle (328) to steer an ultrasound beam (152) to normality with the medical needle (136).

9. The apparatus of claim 8, further configured for:

- forming (S572) a composite image from the B-mode image and a superimposed needle-only image extracted from the needle image (208).

10. The apparatus of claim 6, wherein said apparatus is designed for use in at least one of medical treatment and medical diagnosis.

11. The apparatus of claim 10, wherein said circuitry is configured for the segmenting in the circumstance that body tissue, in said image, that surrounds the medical needle includes an anatomical structure (314) that is elongated, linear, and specular.

12. The apparatus of claim 11, configured for said segmenting in said circumstance automatically, without need for user intervention (S508, S532).

13. The apparatus of claim 6, further comprising a display, said device comprising an ultrasound imaging probe having a field of view for spatially defining a span (124) of dynamic visualizing of body tissue via said display, said apparatus being further configured with a needle-presence-detection mode of operation, said apparatus being further configured for, while in said mode, automatically, without need for user intervention, deciding, based on output of the segmenting, that no needle is even partially present in said field of view.

14. The apparatus of claim 13, further configured for, responsive to said deciding that even the partial presence does not exist, user notification (S540), while in said mode, of the decision, the notifying being performed automatically, without need for user intervention.

15. The apparatus of claim 13, further configured for, while in said mode (596), detecting, based on said output, entry of at least part of a needle into said field of view and for, dynamically responsive to said detecting of said entry, commencing needle visualization mode which entails performance, by said apparatus, of beam steering for better visibility of the medical needle, and enhancing visualization, on said display, of the medical needle.

16. A computer-readable medium embodying a computer program for classification-based identification of a medical image, said program having instructions executable by a processor for performing a plurality of acts, among said plurality there being the acts of:

dynamically performing, automatically, without need for user intervention, an incremental acquisition, in a sweep, over a range (308) of angles (236), from ultrasound (152), of corresponding images depicting a medical instrument;

applying, increment (312) by increment, a line detection algorithm to output of said segmenting for respective ones of said depictions; and

adding outputs of said algorithm to derive an orientation of the medical instrument. 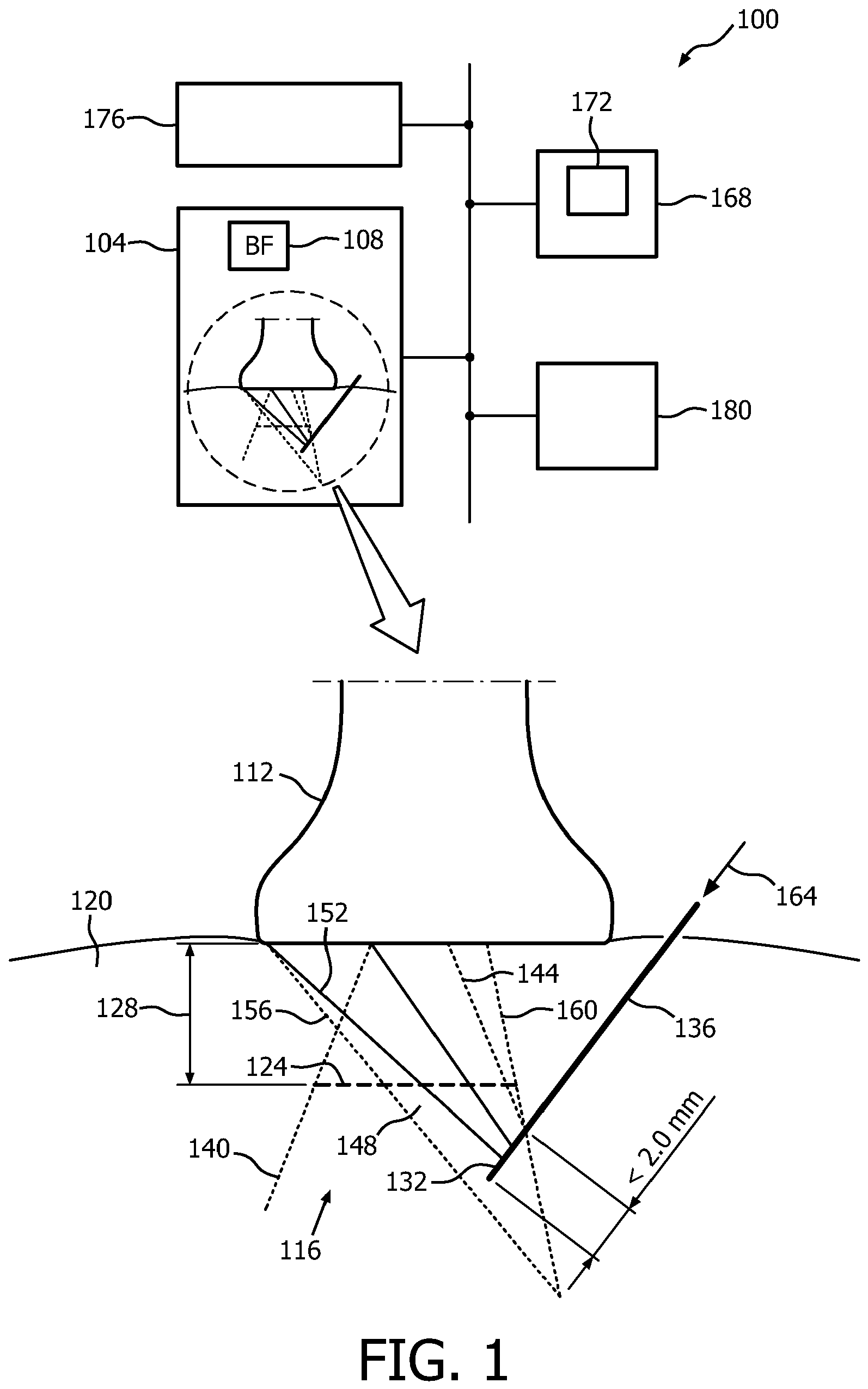 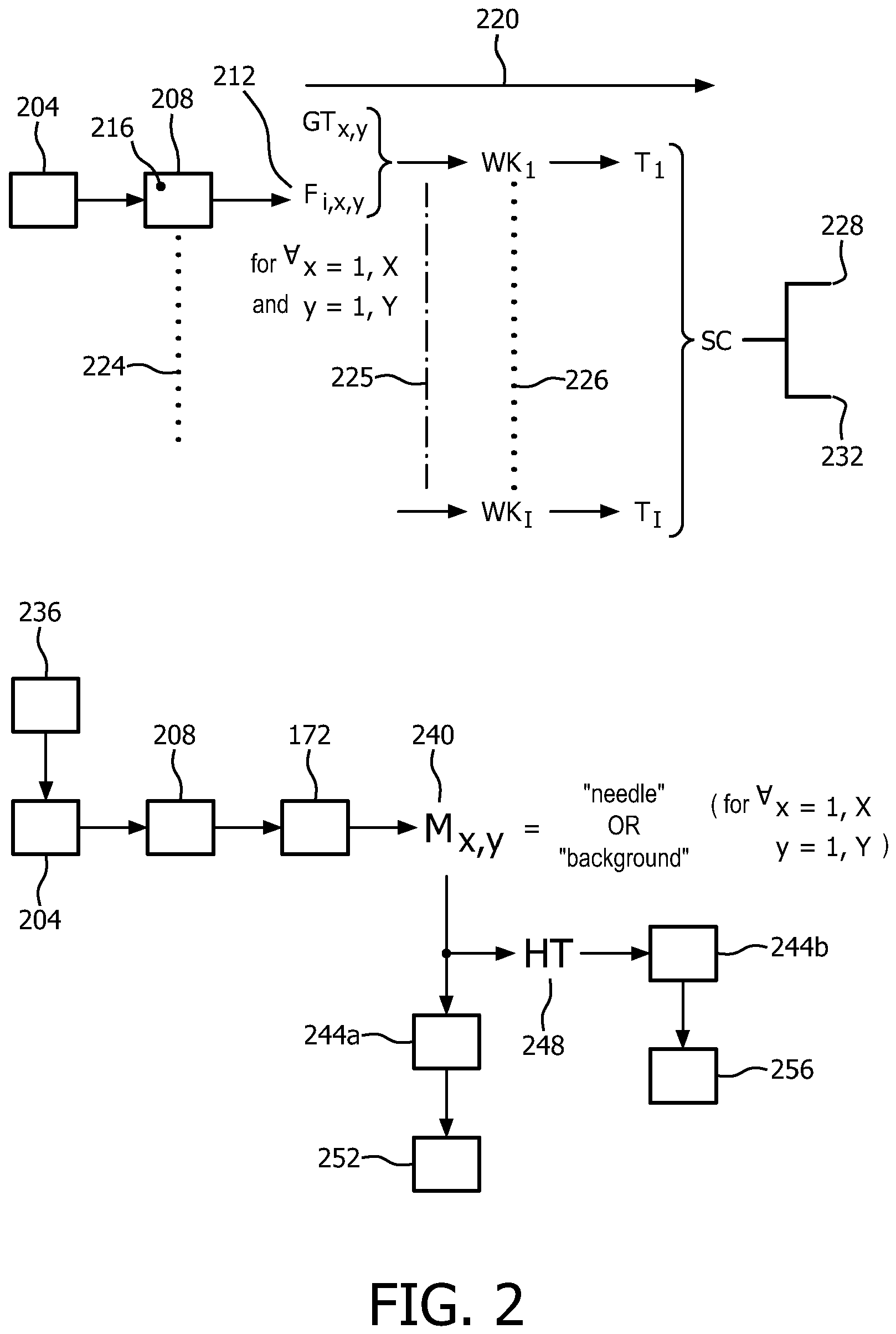 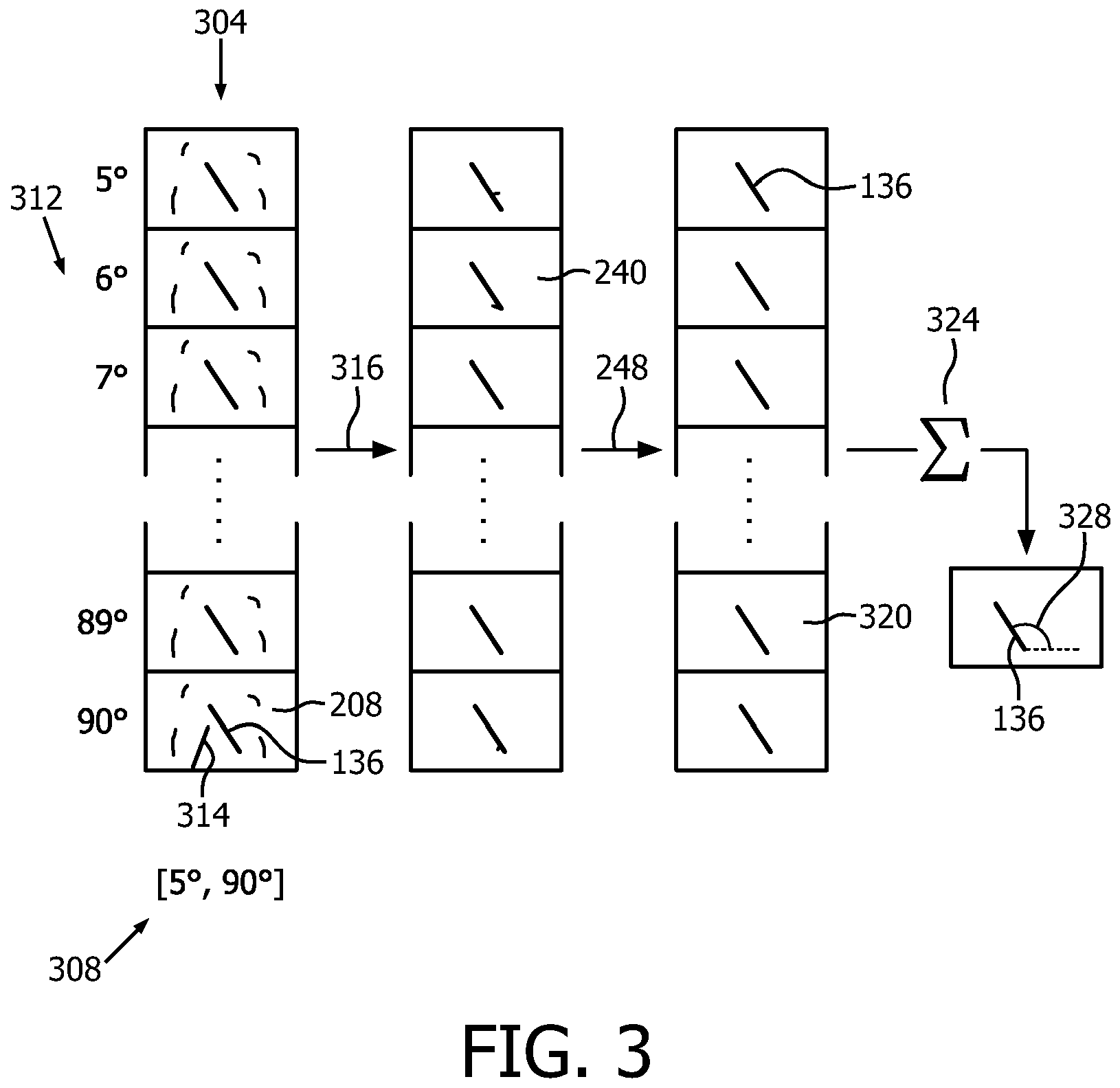 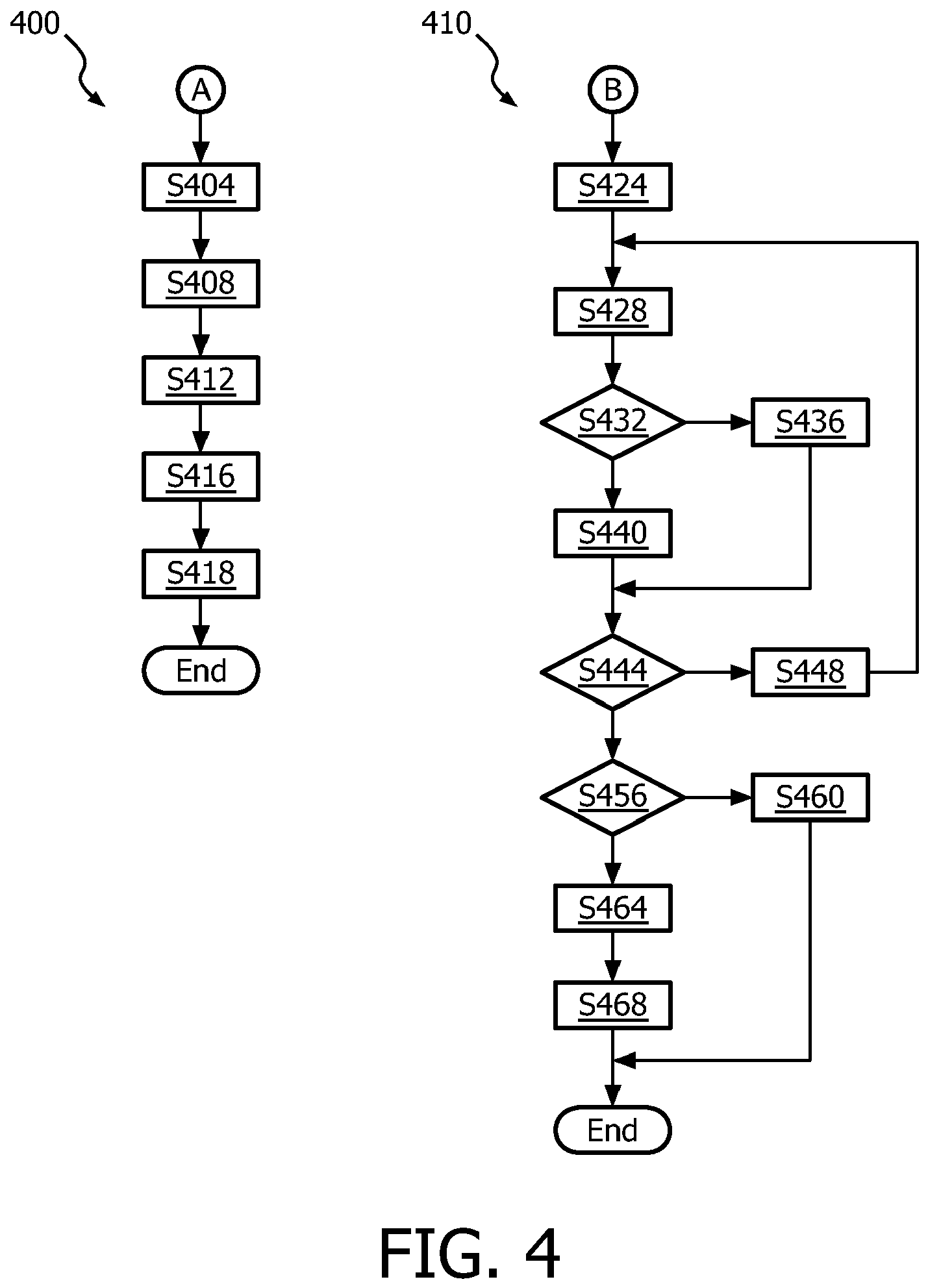 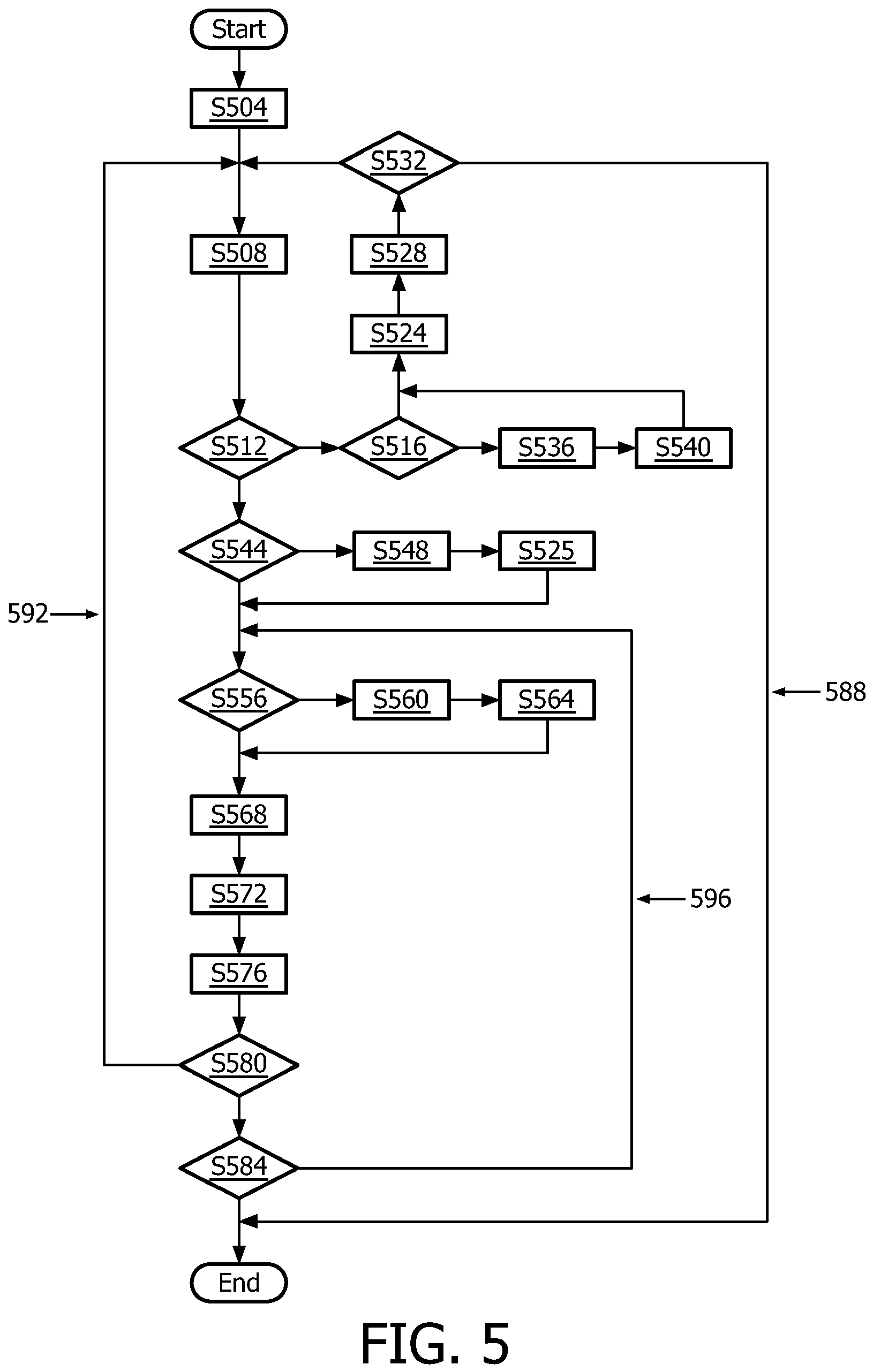