[0002] Absorbent pads for absorption of body fluids such as urine, menses or blood or vaginal discharges are well known in the art, and comprise for example sanitary napkins, panty liners, as well as adult incontinence pads. These articles typically comprise a liquid pervious topsheet as wearer facing layer, a backsheet as garment facing layer and an absorbent core between topsheet and backsheet. The body fluids are acquired through the topsheet and subsequently stored in the absorbent core. The backsheet typically prevents the absorbed fluids from wetting the wearer's garment. Absorbent pads often comprise side flaps provided on the side edges of the napkin meant to be fold around the crotch edge of an undergarment during use in order to protect the undergarment from side leakages.
[0003] The absorbent core typically comprises one or more absorbent materials. Absorbent materials can be comprised typically in fibrous or particulate form, but also unitary elements formed by absorbent materials such as absorbent foam can be used.
Absorbent materials can be selected among all absorbent materials known in the art, for example natural fibres (such as for example cellulose fibres, typically wood pulp fibres), artificial fibres (such as rayon, viscose), absorbent and superabsorbent polymers (which can be used in the form of particles or fibres or foam layer or foam particles or combination thereof). Typically the absorbent core has a layered structure and is formed by one or more layers.
[0004] Absorbent pads typically comprise an adhesive on the garment facing side of the backsheet. Such adhesive is protected by a release film which can be for example a sheet of siliconized paper. Absorbent pads are commonly marketed in folded configuration wherein the article is folded 1, 2, 3, or more times around folding lines which are usually parallel to the transverse axis of the absorbent pad but can also be parallel to its longitudinal axis and/or have any other direction. In the most common configuration absorbent pads have two folding lines which are parallel to the transverse axis of the absorbent pad. Typically absorbent pads are folded and wrapped individually with a thin plastic film. Sometime the inner surface of the wrapper film is treated with a release agent such as silicone so that the film itself can also act as release film protecting the adhesive and releasing it when the wrapper of the absorbent pad is removed. Always sanitary napkins from The Procter & Gamble Company are currently marketed using this type or wrapper/release film.
[0005] The main purpose of such absorbent pads is clearly to absorb and retain body fluids and preventing as much as possible that such fluids escape from the article causing soiling of underwear and embarrassment of the user.
[0006] Modern absorbent pads are highly optimized in this respect, however the presence of folding lines can have an impact on the internal structure of the absorbent material. Absorbent pads are folded and compacted using relatively high pressures machinery in order to compact them as much as possible so that, once packaged, the articles are thin and discrete to carry in a purse. However the portions of the absorbent core in correspondence with the folding line are subject to elevated stress when folding and we have surprisingly found that their internal structure can be deeply altered so that the fluid transport and absorption properties of these portion are very different from those of the flat unfolded portions thus generating a risk of fluid leakage.
[0007] The present invention focuses on modifying the composition of the portions of the absorbent core which are in correspondence with the folding lines so that the overall properties of the core and especially the risk of leakage are reduced with respect to the same core having the same folding lines and a uniform composition. The folding line creates a densification of the core structure and (as known to the skilled person) absorbed fluids spread more quickly in core zones having a higher density. Therefore we have observed that when fluids touch the core portion in correspondence with the folding line the fluid is quickly transported along the folding line thus greatly increasing the risk that the fluid reaches the perimeter of the article and causes side soiling.
[0008] Specifically in the present invention the problem has been inventively solved by increasing the basis weight of the SAP in a small selected zone in correspondence with the folding lines of the article. It has been observed in fact that surprisingly it is sufficient to increase the basis weight of SAP in a small defined area of the absorbent core as explained in detail in the invention description below to obtain a significant improvement reducing the risk of leakage.
[0009] EP 2 517 682 discloses an absorbent article having two embosses that are separated from one another in the longitudinal direction by a discontinuous zone.

[0010] According to an aspect of the invention, there is provided a folded absorbent pad according to claim 1.

a first outermost layer forming said wearer facing surface, which is provided from a mixture of bi- component fibers and cellulose or viscose fibers, preferably non-softened cellulose fibers, and

said first layer has a weight fraction of the overall core construction of 10%-30%,

[0064] Another core construction which is known to the skilled person is the so called "airfelt free" construction. In this construction the core comprises a non woven layer which acts as a substrate for a storage layer which is predominantly made or consists essentially of SAP particles or fibers, these particles or fibers are typically immobilized by a hot melt glue which is fiberized. Often another nonwoven layer is used as top layer (so that the storage layer is sandwiched between a substrate nonwoven and a top layer nonwoven) or another structure formed by substrate, storage layer and fiberized glue is applied face to face to the first structure so that the two storage layers are in contact. Airfelt free cores are known in the art are described in a number of patent publications such as EP2022452A1, EP2067457A1, EP2338451A1, EP2453859A1.
[0065] Conventionally AGM particles are used as SAP in all core constructions, however also AGM fibers and porous superabsorbent particles such as those as described in WO2010118272A1 can be used.
[0066] Alternatively or in combination, a layer of superabsorbent foam such as a HIPE foam can be used in an absorbent core. Such layer can be used as such and can constitute the entire storage layer or can be combined with other layers such as those mentioned above for the various suitable core constructions.
[0067] HIPE and other superabsorbent foams can also be used as superabsorbent material in comminuted or in particulate form in a manner similar to that how AGM particles are used.
[0068] The absorbent pad may also include such other features as are known in the art including, but not limited to, lotions, acquisition layers, distribution layers, wetness indicators, sensors, elastic elements and the like.
[0069] According to the present invention, the absorbent article can be in the form of a pad, and thus typically a sanitary napkin, a pantiliner, or a pad for low or moderate adult incontinence.
[0070] The dimensions and values disclosed herein are not to be understood as being strictly limited to the exact numerical values recited. Instead, unless otherwise specified, each such dimension is intended to mean both the recited value and a functionally equivalent range surrounding that value. For example, a dimension disclosed as "40 mm" is intended to mean "about 40 mm".
[0071] While particular embodiments of the present invention have been illustrated and described, it would be obvious to those skilled in the art that various other changes and modifications can be made without departing from the scope of the invention. It is therefore intended to cover in the appended claims all such changes and modifications that are within the scope of this invention.

1. A folded absorbent pad (10) having, in its flattened unfolded configuration a central longitudinal axis (I) and a central transversal axis (II)
said pad (10) comprising:

3. The absorbent pad of claims 1 or 2 wherein at least one of said folding lines is parallel to said central longitudinal axis (I).

5. The absorbent pad of any preceding claim wherein said storage layer is an air laid layer comprising fibers and SAP.

6. The absorbent pad of claim 4 wherein said storage layer is a layer formed predominantly by SAP and a layer of hot melt glue in fiberized form.

7. The absorbent pad of any preceding claim wherein said SAP comprises a layer of superabsorbent foam. 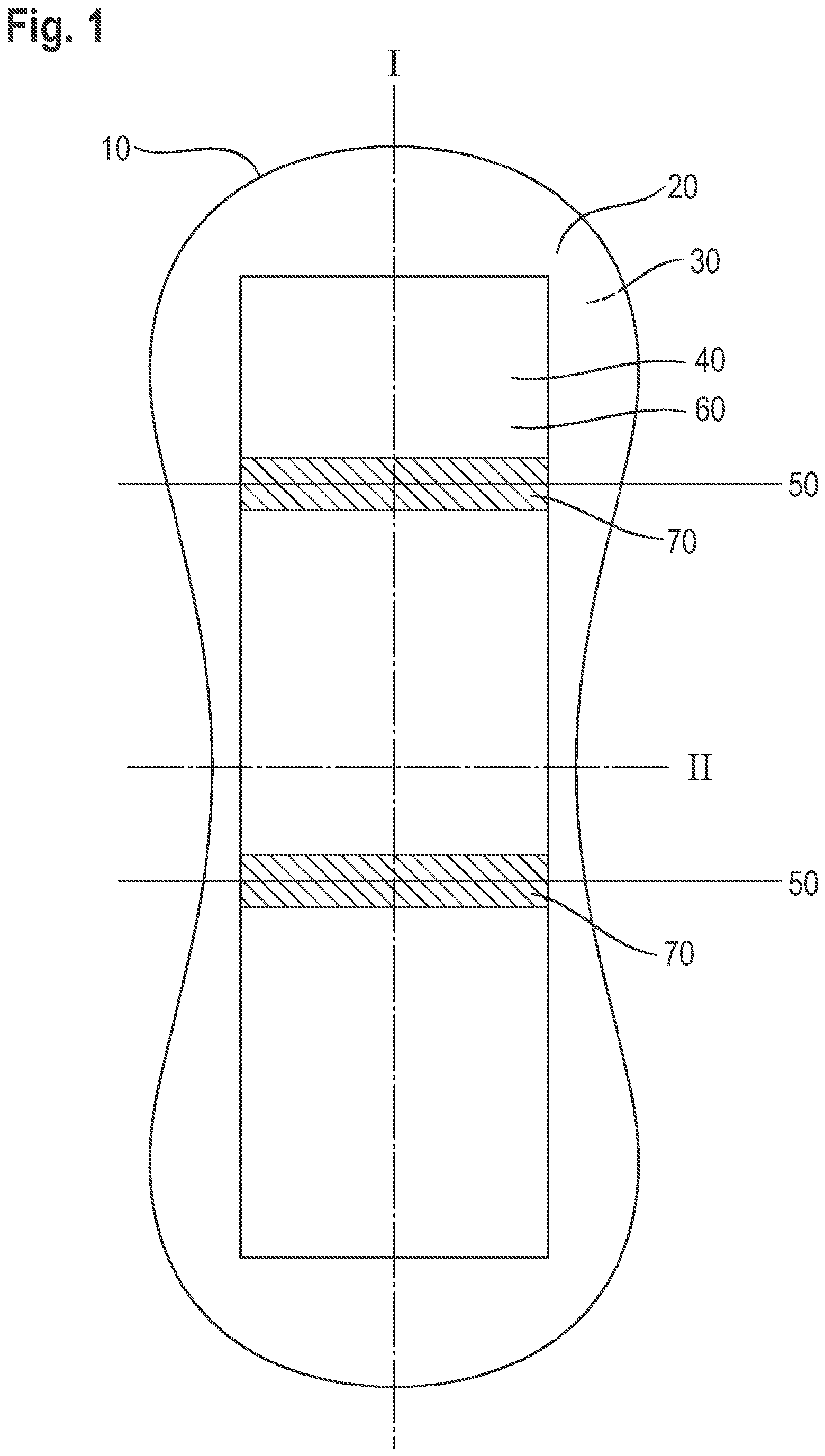